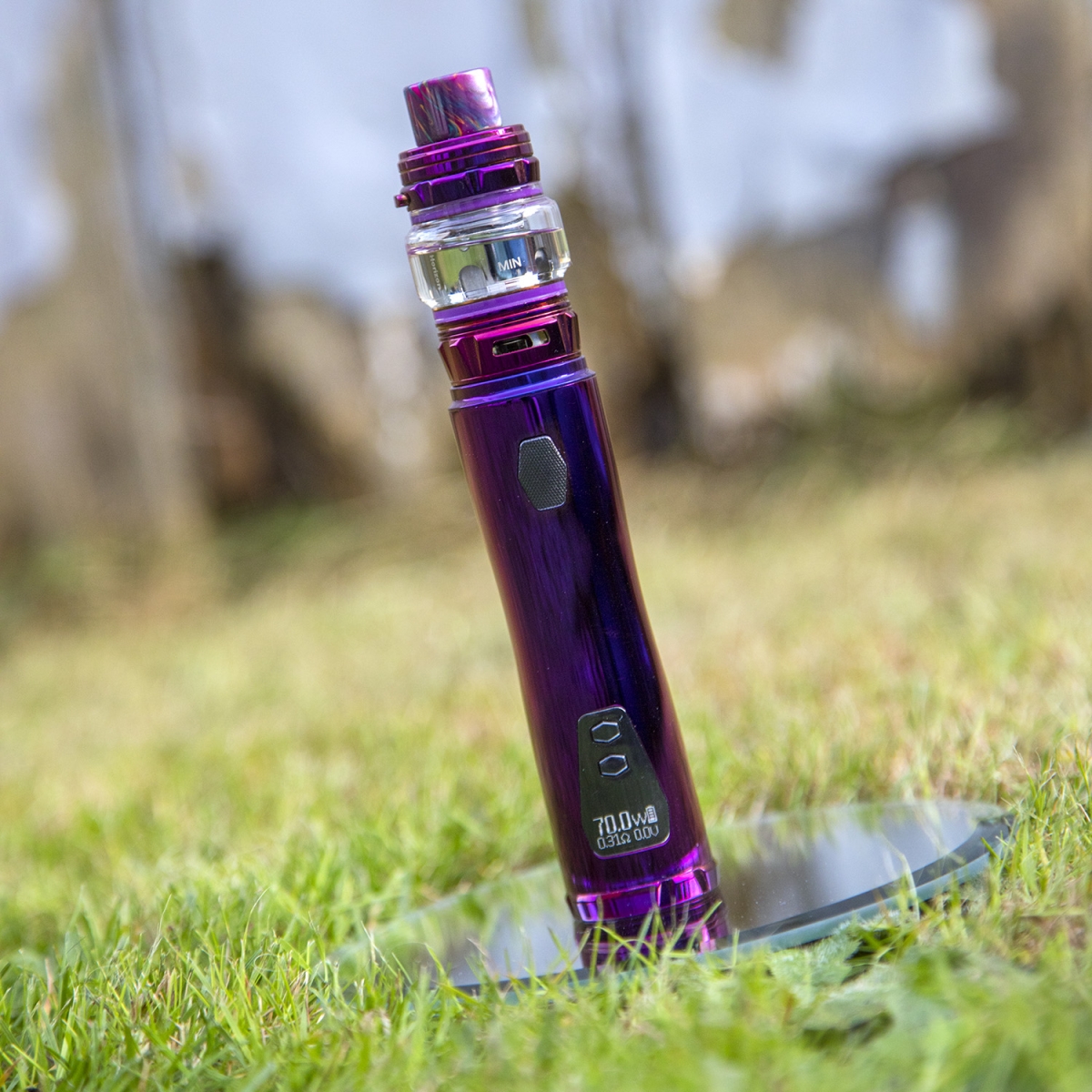 Supplied by Vaporl for review purposes.

The Horizon Tech Falcon King Pen Vape Kit is a great, simple kit for a beginner and, with the superb Falcon King tank, it is a viable option for experienced vapers despite its limited options. It is stylish with great flavour, but limited battery life might be a deal breaker for some. 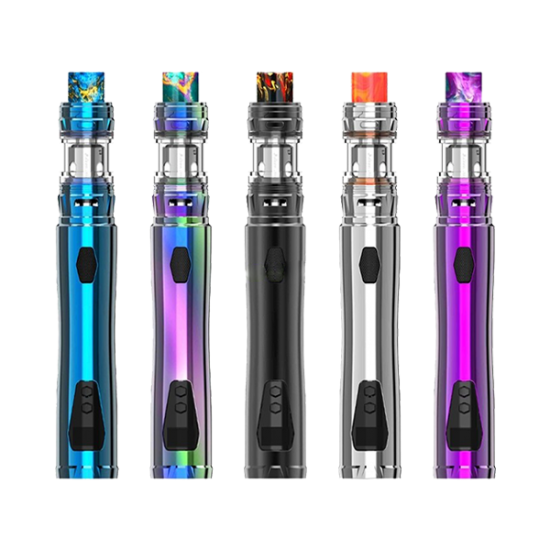 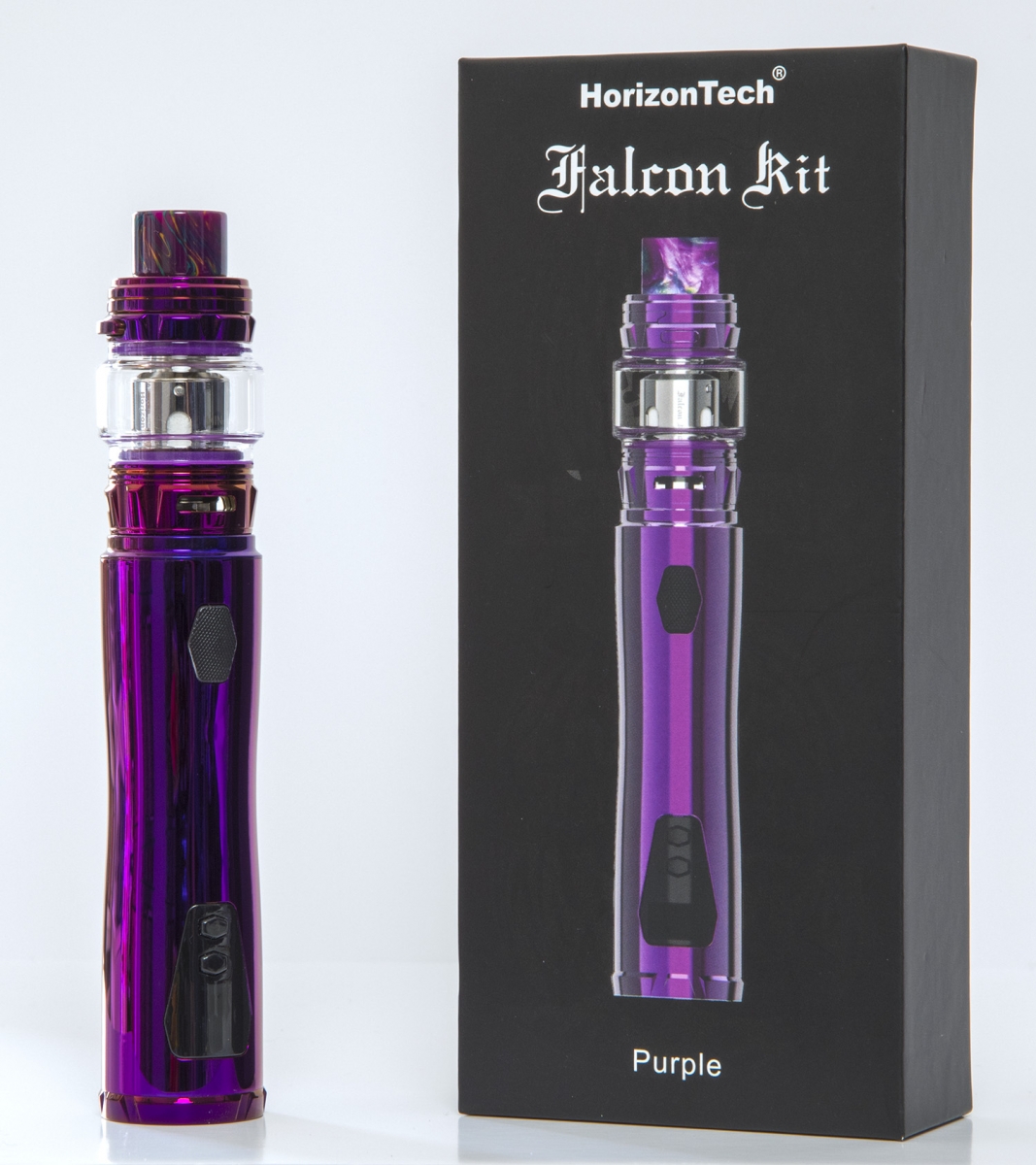 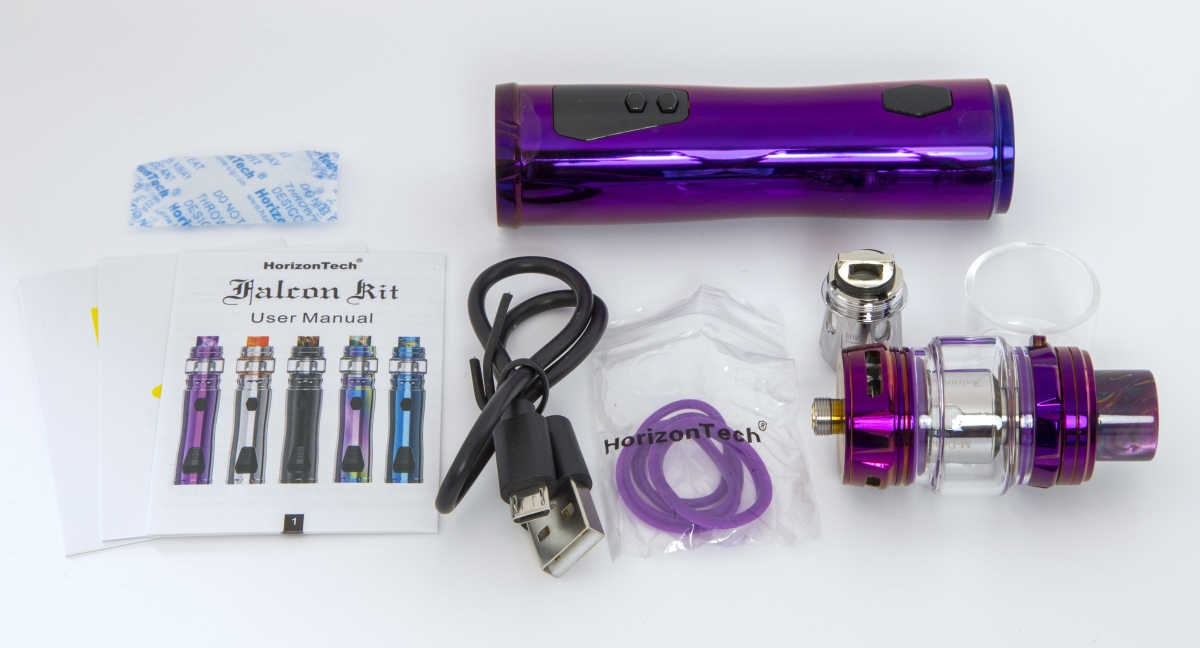 As you can see, I was sent the Purple version. It comes with pretty much the standard contents you would expect with a mod & tank kit, it’s good they include an optional straight 5ml glass. The micro USB cable is a little short which I don’t understand why, a few pence for a longer cable would make it more convenient. 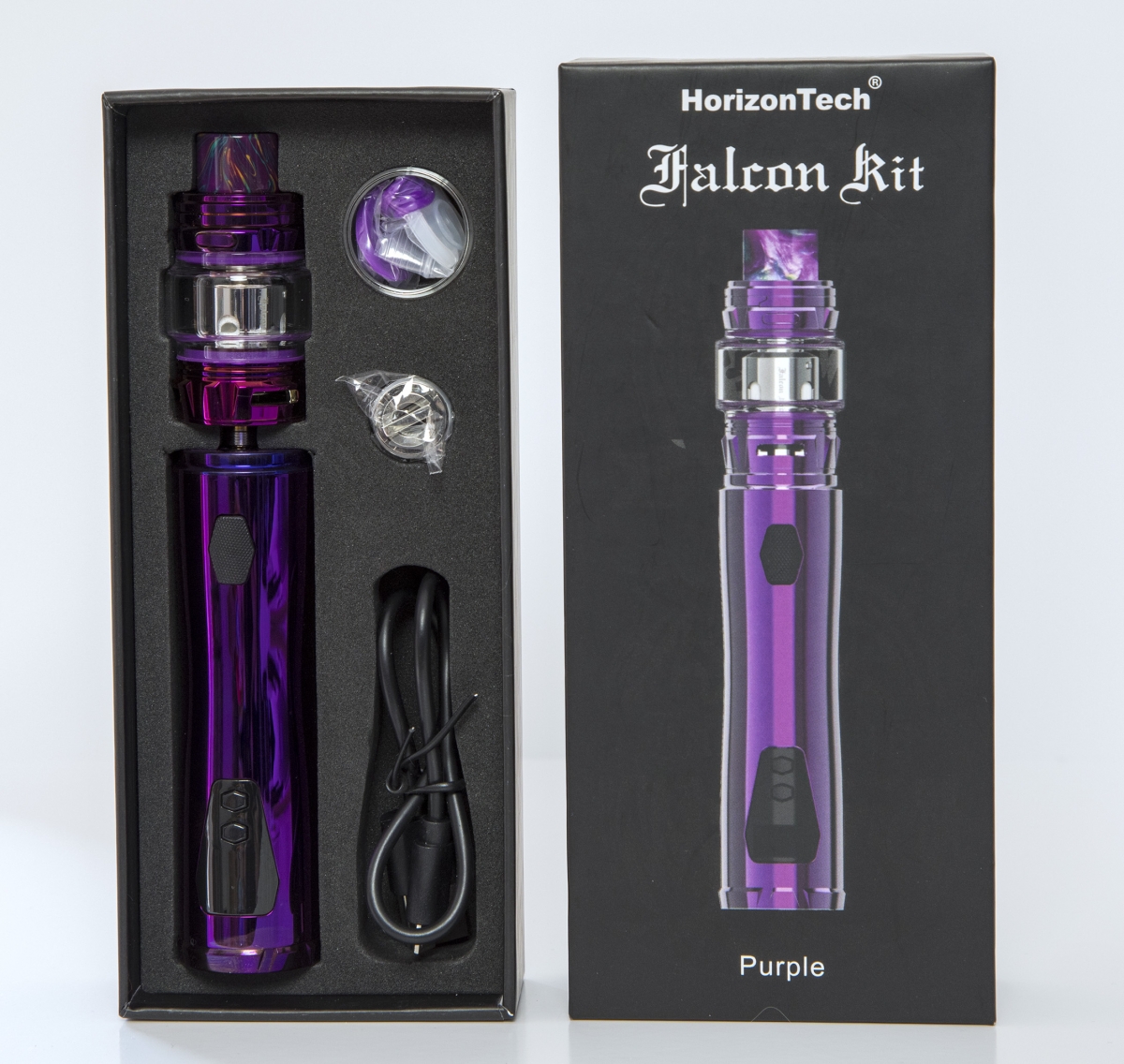 Opening the nice and weighty box you are greeted with everything on the top layer with the documents underneath. First thing I did (after the photographs) was prime the 0.38oHm M-Dual coil and fill up the tank. The filler cap is awesome! It’s spring loaded and flips almost fully open so you can fill it easily with larger bottle. I left the tank to settle and turned my attention to fitting an 18650 battery into the mod. This was simple enough, unscrew the base, insert the battery as indicated with the marking on the cap (negative end), screw the base back on and you’re ready to go. 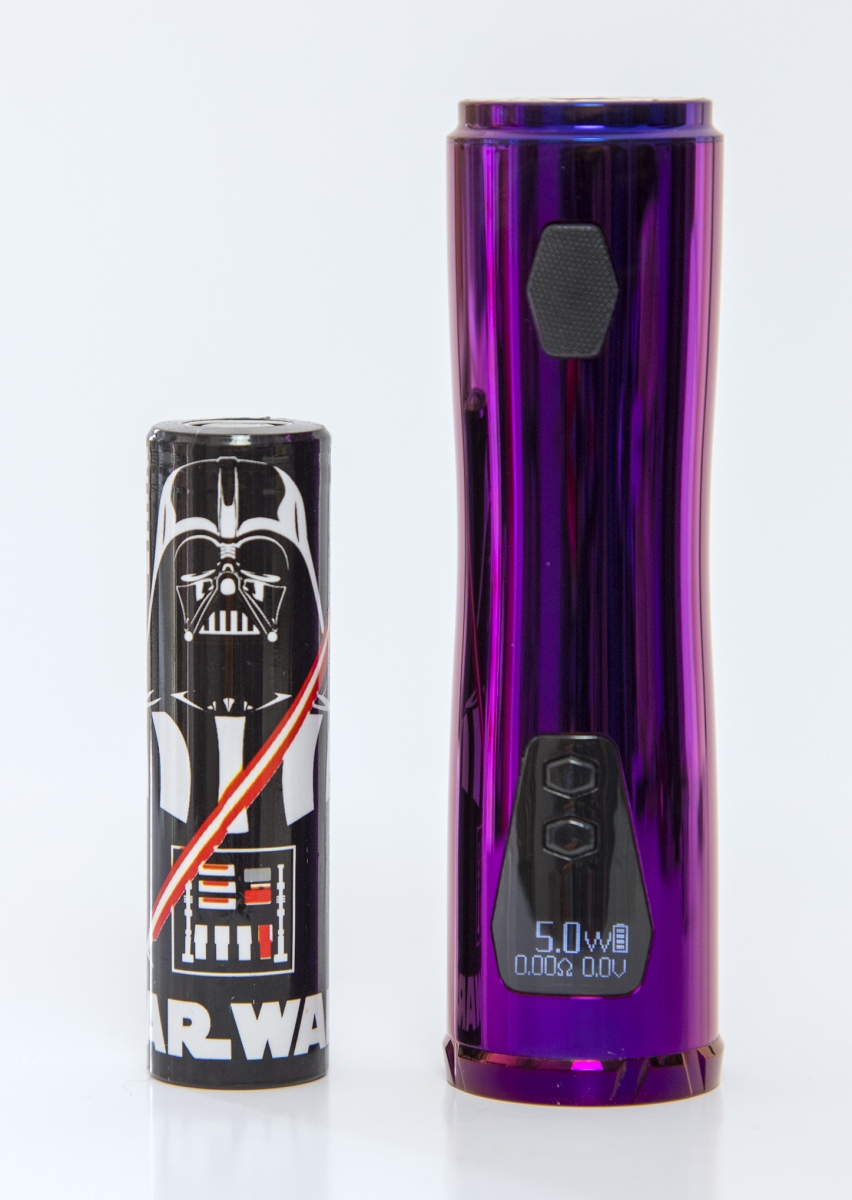 So with the tank primed and the battery fitted, it’s time to screw the tank onto the mod. That’s all there is to set up, simplicity is one of the features of this kit.

The mod itself is variable wattage only and goes up to a maximum of 80 watts. As mentioned earlier this mod is simplicity and beginner friendly, the menu is basic and easy to use, in fact there is only one thing that the menu does other than wattage adjustment and that is the preheat setting. This can be accessed by pressing the fire button and the ‘up’ key, select the wattage to power boost and press fire to confirm, though I found this option didn’t affect much when using the max 80 watts so I am unlikely going to bother using it especially as ‘mesh style’ coils ramp up fast anyway.

So the only operation you need to play with is wattage adjustment. With the up/down buttons it round robins and scrolls at a decent speed, to lock the wattage you press the up/down button together for three seconds, and same again to unlock. This locks the settings only, but you can still fire the mod.

To turn the device on or off, just press five clicks of the fire button.

That’s all you need to know about operating apart from the obvious click the fire button to fire the mod.

Styling is symmetrical with nice detailing on the top and bottom of the mod. There is a micro USB port at the rear for charging and firmware, though I would advise charging with a proper battery charger. 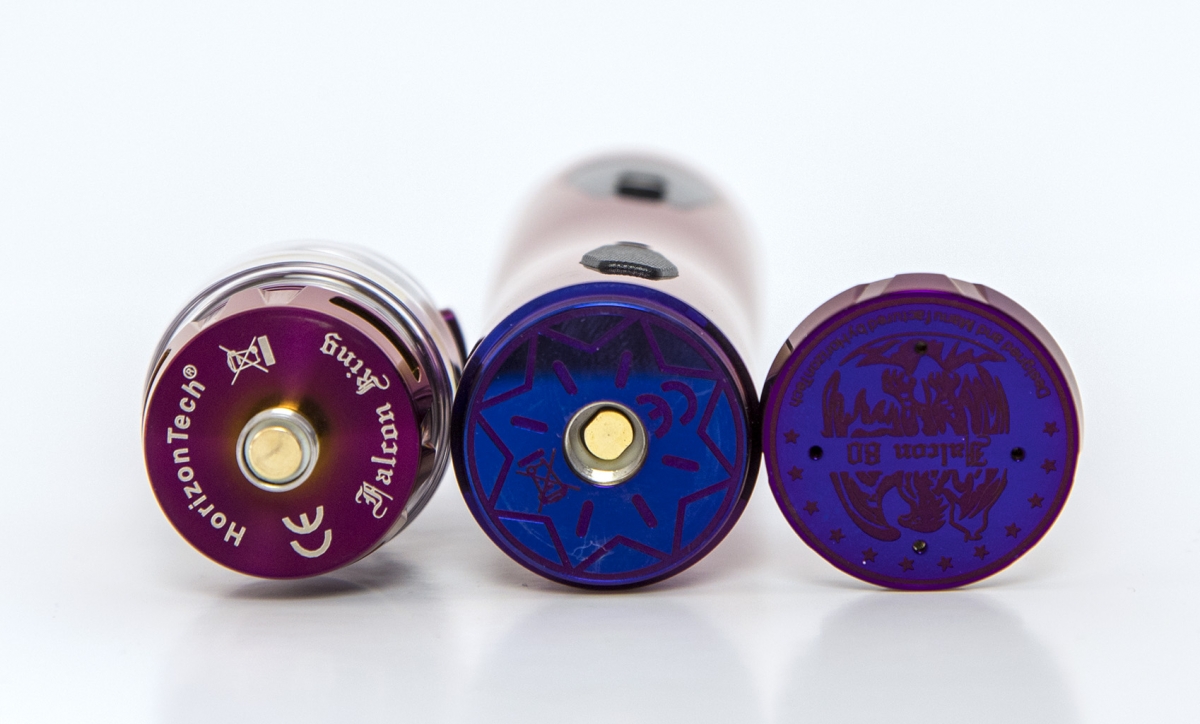 The screen, all though darkened by the tinted screen, is just about visible outdoors and perfect indoors or in shade. The screen is small but functional, displaying watts, oHms of the coil and the voltage applied.

It feels really comfortable with a slight curved shape which feels secure in the hand.

There really isn’t much more to say about the mod until you mount the coil and operate it. 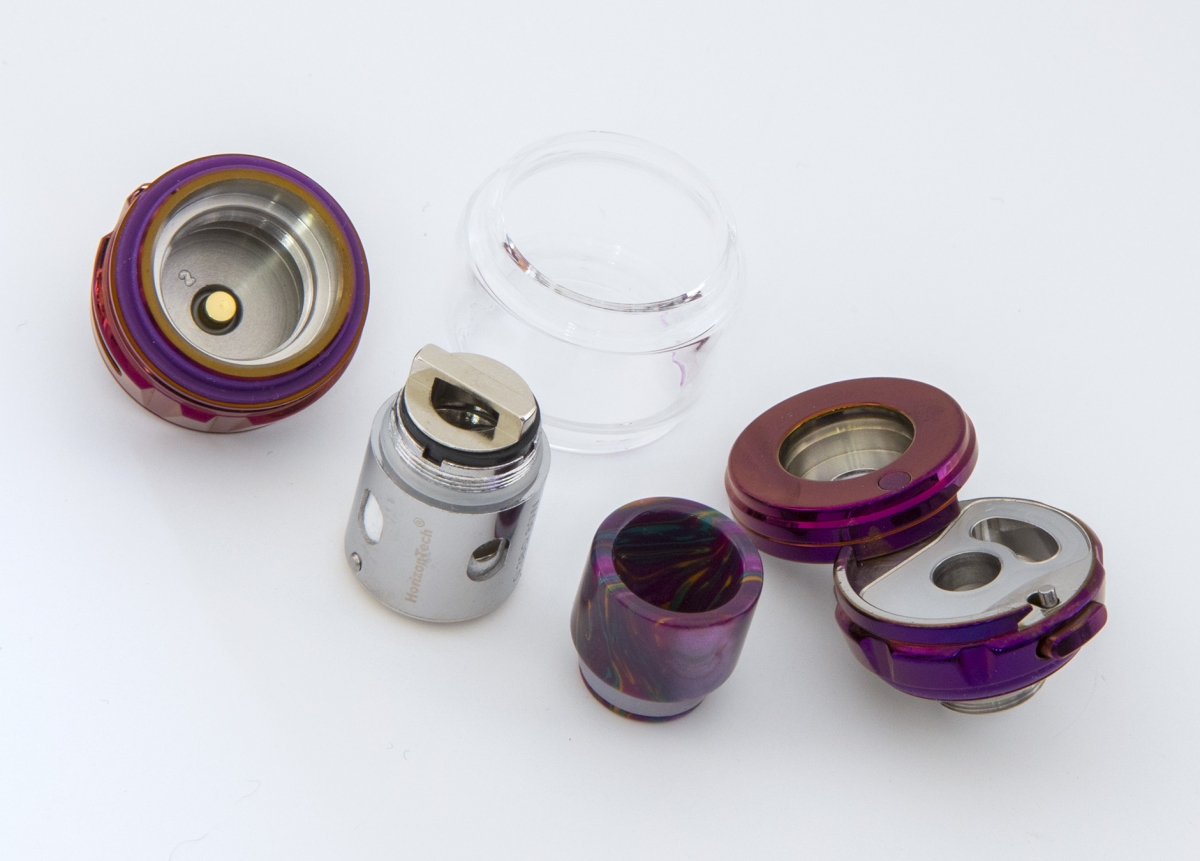 This is the jewel in the crown. The tank strips down into five components by unscrewing the base. The coil also unscrews and the rest pulls apart nicely which makes it simple to clean. 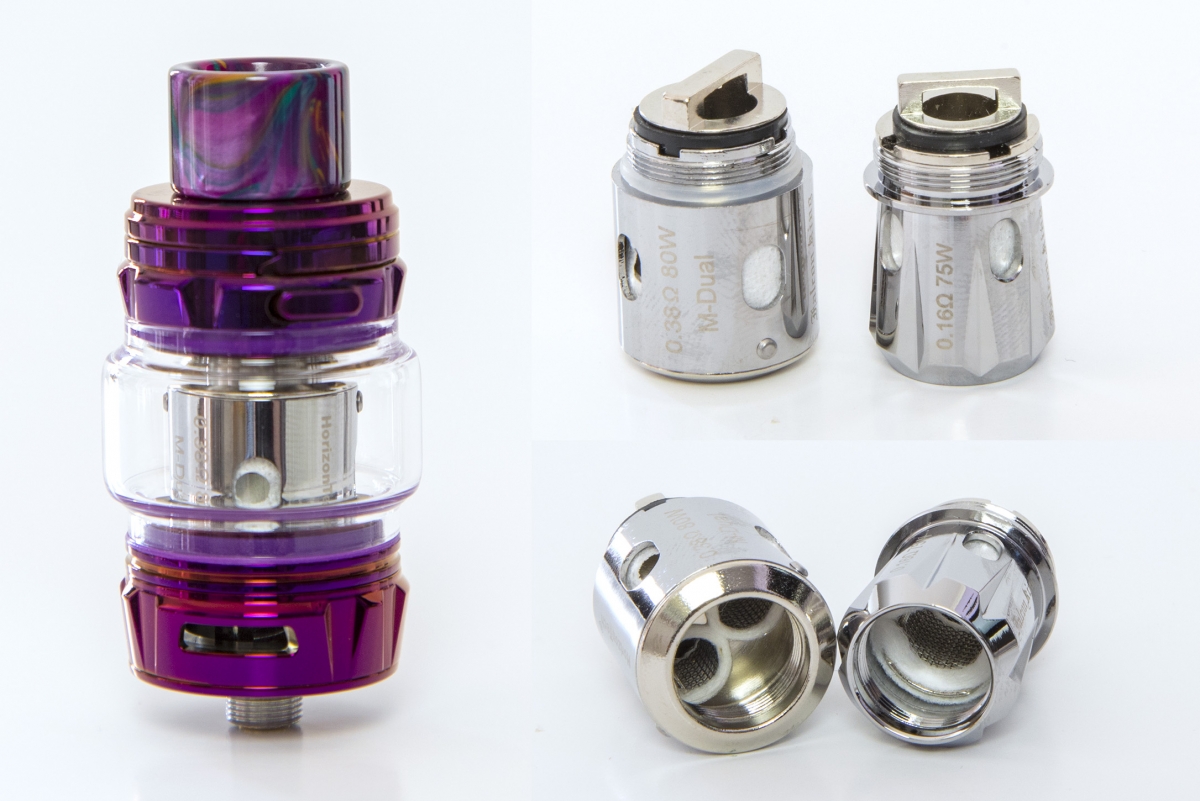 There are a few new coils for the Falcon King, but a big pro is it also takes the already superb Falcon original mesh coils which is a huge plus that I wish other companies would follow (some already do but the majority don’t). 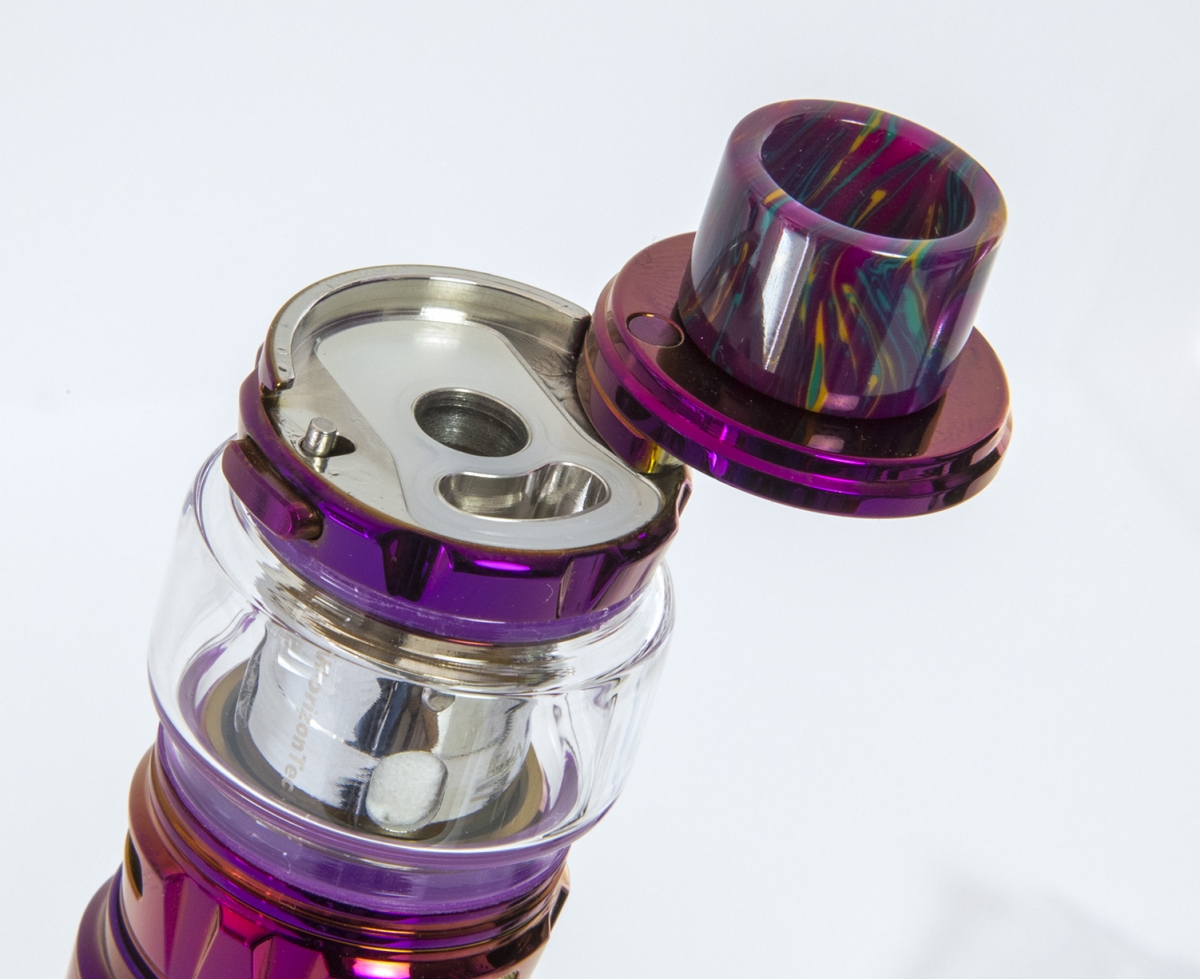 The top fill spring loaded cap is superb, nice and secure, To open, you press the protruding button. It swings open 180 degrees making it easy to fill up with most of the larger bottles via the large kidney shaped fill port and then it snap closes. I haven’t had any issues with it accidently flipping open in my pockets.

The styling of the tank appears to be crown themed with its rather nice protruding pattern around the airflow ring and fill cap section. The colour matching O-rings and resin style drip tip are a good match as is the tank to the mod.

The airflow is on three sides and gives a full airy DTL draw and closes fully, I preferred it about half way open. It’s quite noisy which is typical for large bore mesh coil tanks, pleasingly there’s no whistling throughout the airflow range. 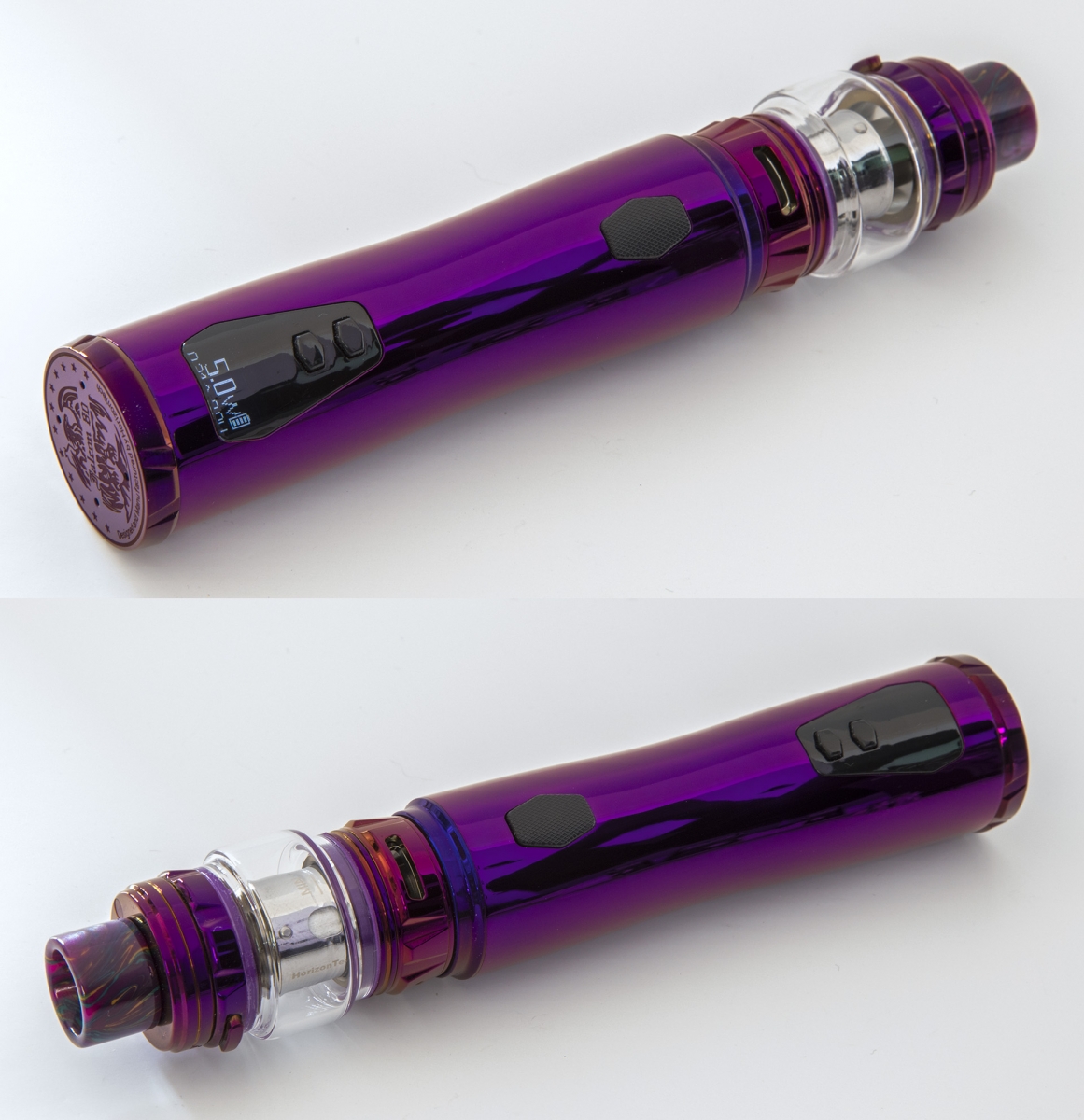 So onto the performance…….

I have to admit I was looking forward to this part as I am a fan of the first Falcon Mesh tank so I was keen to see if it had improved. I started off with the preinstalled 0.38 oHm M-Dual Mesh coil, took it outside and eased up the wattage to break the coil in. It started to come alive around 70 watts and rated 80 watts was where it peaked and I absolutely LOVED it! Full dense clouds with improved flavour production.

Coil life is amazing. I usually try to thrash a coil to the end of its life so I can test the next coil. I had to give up after two weeks and swap the coil anyway! I can still use the old one which I sealed in a baggie. Out of the two coils you get a very different vape. The single bore coil gives more vapour and requires less power but the dual coil is better for flavour plus I get to try more coils in the cross compatible range.

I was sceptical that a single cell 18650 battery pen mod would deliver consistent power, but it did indeed keep up nicely but at a price; battery life which drains at a fair rate. I found exclusive moderate use lasted me just shy of five hours so if you intend for this to be an all-day vape, you will need spare batteries. Also the trade-off between mAh and Amps of the battery is a factor so I recommend the following batteries:

With those batteries you should be all good, be sure to grab a spare or two (and a charger).

It’s a shame they didn’t go for a larger battery format like a 20700 or even a 21700, but that would have compromised its form factor and would make it ‘fatter’.

That said, I am more than happy with its performance as I always carry spare batteries and swapping a battery is only a few second job.

The Falcon King Pen Kit has impressed me quite a lot. The only drawback I have is the 18650 battery size being pushed to its max and draining fast. It’s not a deal breaker for me as spare batteries are pretty much essential for most vape kits. The King's Crown is the Falcon King tank, which is superb and has brought it right up there with the best mesh tanks currently available. I love the feel of the mod and its simplicity of operation, this makes it absolutely perfect for a new vaper and a handy addition to experienced vapers alike.

So would I buy this kit if I ‘lost it’?
If I was a new vaper I would say absolutely. As an experienced vaper, I would probably just buy the Falcon King tank as I have plenty of mods already. Though I do like the mod, it offers nothing new.

As you can see, this kit has little to complain about. Its simplicity helps and means it’s a very attractive option for a beginner yet as an experienced vaper I also appreciate its simplicity too. It is one of the kits I grab when I can’t be bothered with a DIY build, and with spare batteries and long coil life, it’s one I can trust to take out for the day. 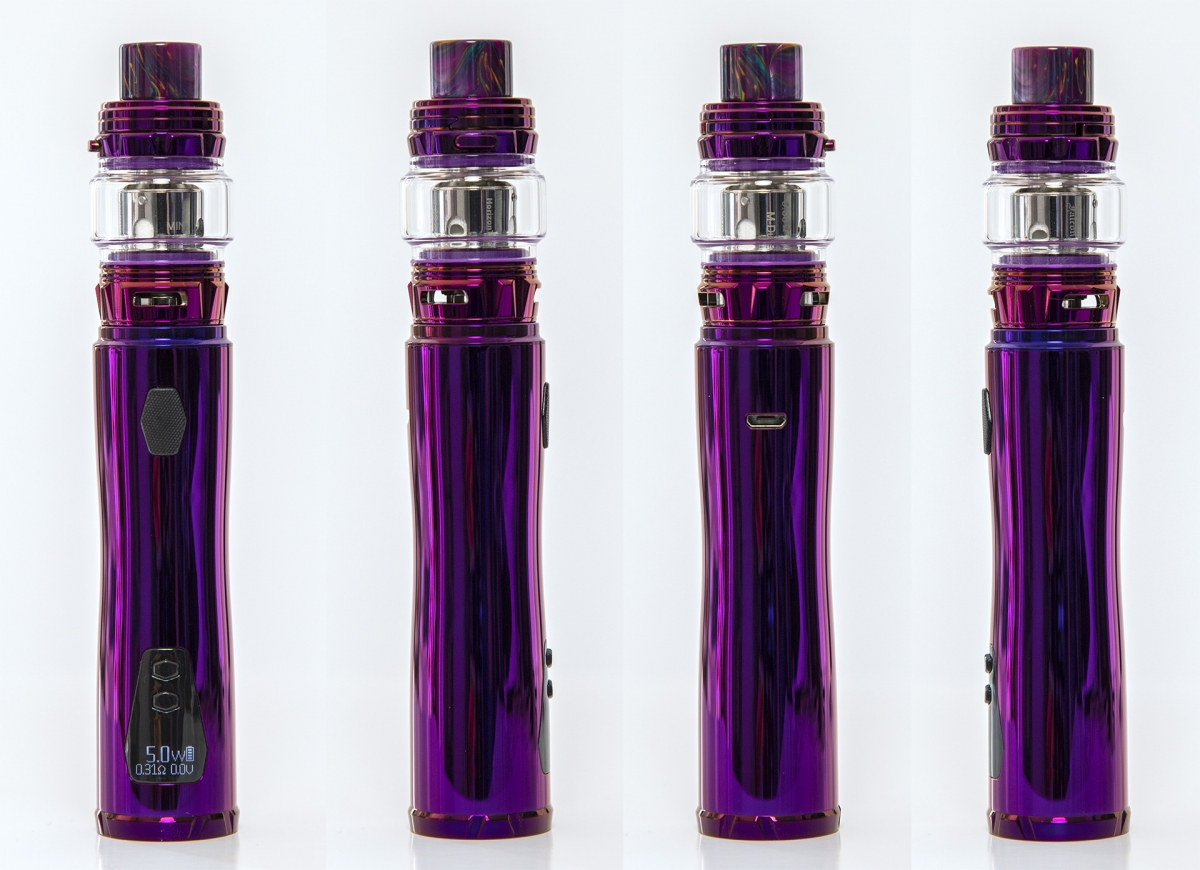