Supplied by Health Cabin for review

https://www.healthcabin.net/geekvape-obelisk-120-fc-kit-p/26299.html?sscid=31k5_qs4dt
Link is to the ZEUS tank version
Login for the latest discounted price. 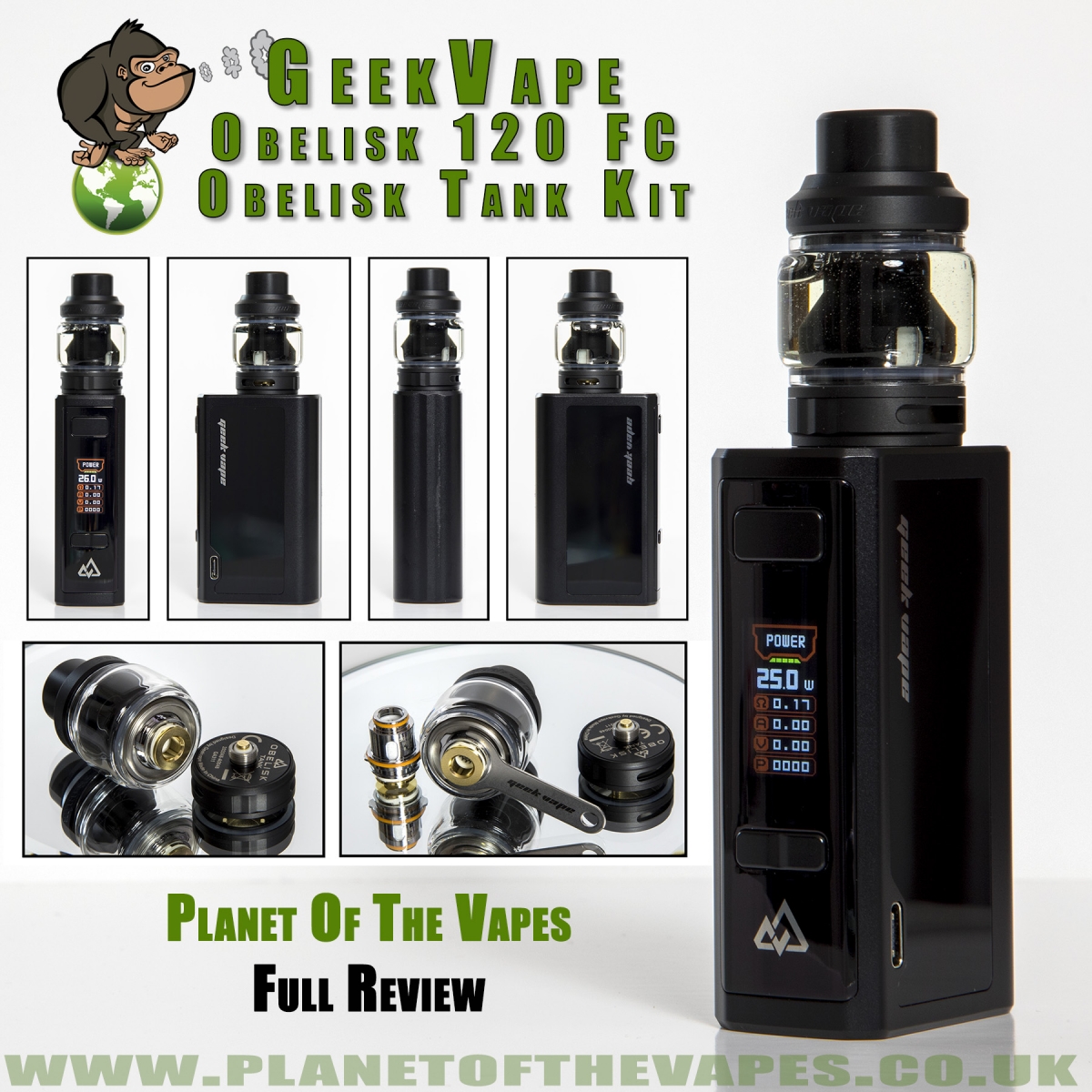 Battery charging time woes? Fear not as GeekVape have come up with a pretty amazing internal dual LiPo battery with crazy fast charging times. Not only that, it also features OTG charging so you can use it as a power bank for your other vapes.

A strange name for a box mod though?

An obelisk is a tall, four-sided, narrow tapering monument which ends in a pyramid-like shape or pyramidion at the top.
They must have used a random name generator for this one.

I think they should have called the tank Asterix though!

The listed features mostly seem to focus on the battery and charging tech:

Along with various protections:

I received a sample version so I cannot predict what the final packaging will look like. One thing is for sure, it will be a whole lot less mysterious than the big plain black box I received. 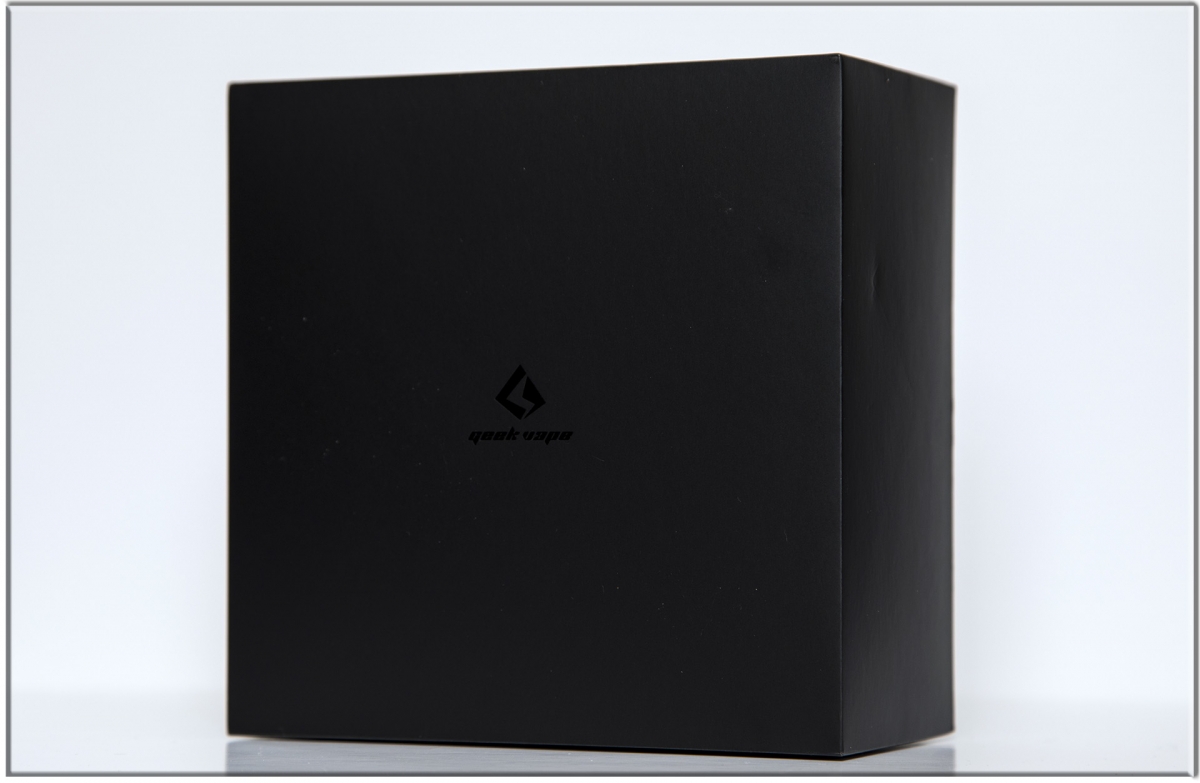 Obviously yours will come with some kind of retail artwork sleeve. Opening it up reveals the main kit. 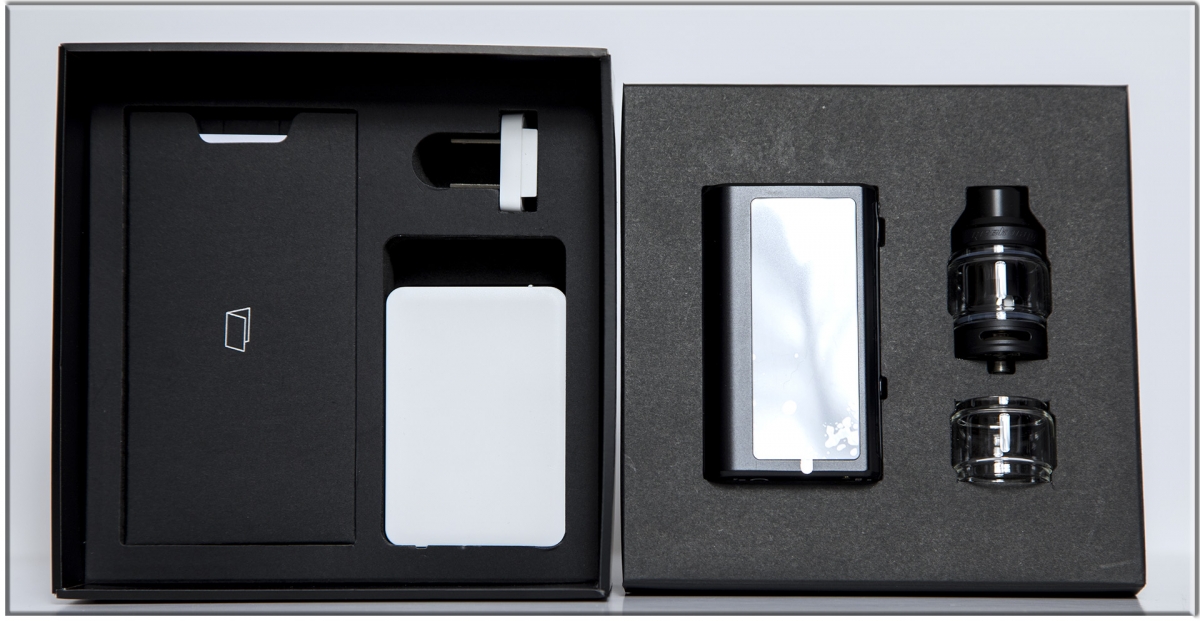 Underneath that layer reveals the rather cool fast charger along with a box of accessories. 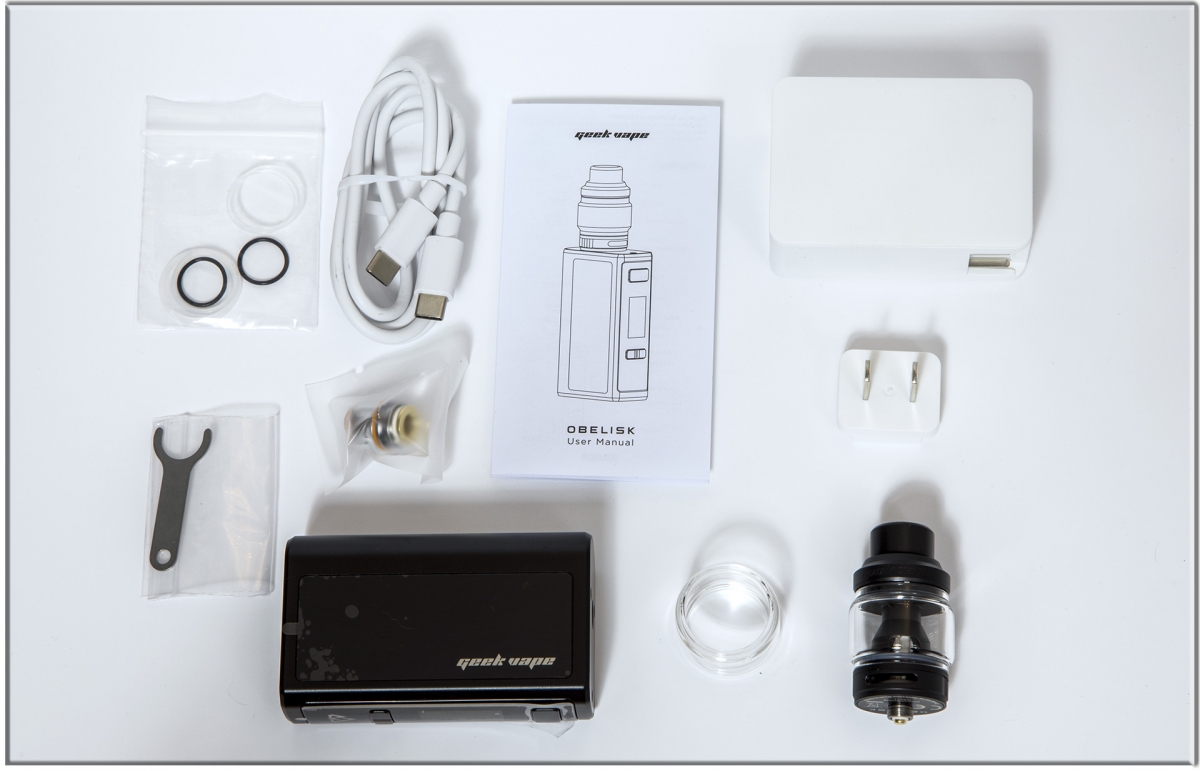 There are going to be different bundles on sale with varying prices depending on how much of the kit you want and which country, if you already have a PD Fast Charger then you can save a few quid by just buying the mod and tank. 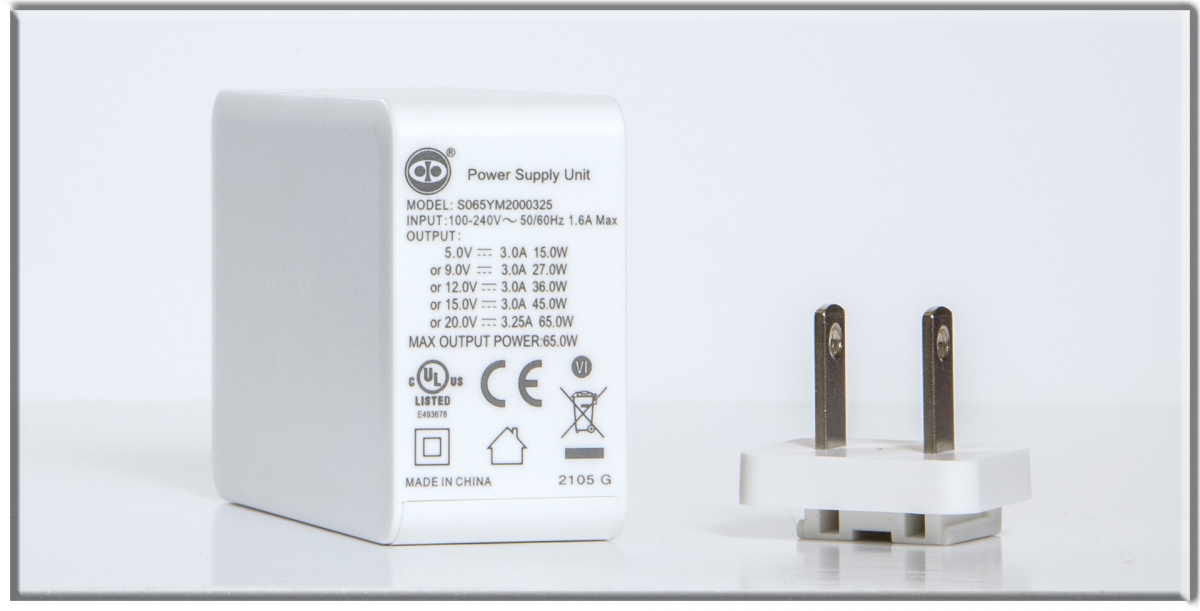 Unfortunately, since it was a sample, I received the USA version so I will need to buy myself a plug adaptor to take advantage of the power supply, so no 15 minute charge for me.

I did search a few other reviews and I can confirm it does indeed fast charge in 15 minutes though. I’ve ordered a UK to USA plug adaptor which costed around £3.50 but it hasn’t arrived in time for the review so I’m just going to assume it’s amazing judging by the videos I’ve seen.

Being totally honest, I simply don’t like gloss black mods, they are fingerprint magnets and it doesn’t take long for them to look grotty in everyday use. It is also a pain to photograph as it picks up every speck of dust and the odd stray cat hair, but I will put my bias aside for the review and pretend I love black.

The mod is well protected with peel off stickers. Once removed, the glossy side panels have a cool linear pattern embedded in them, almost a 3D effect as you rotate it in the light, though they are plastic instead of glass so they are prone to scratching.

The weight is impressive, it feels sturdy but nice and light considering it has two built in batteries. They are LiPo cells which are lighter than Li-on which helps.

GeekVape seem to have gone all retro with the Obelisk’s design, a real old-school box mod and tank but with state of the art electronics inside. They have got the ergonomics spot on as it feels comfortable, and the fire button is in the perfect place for finger or thumb firing. 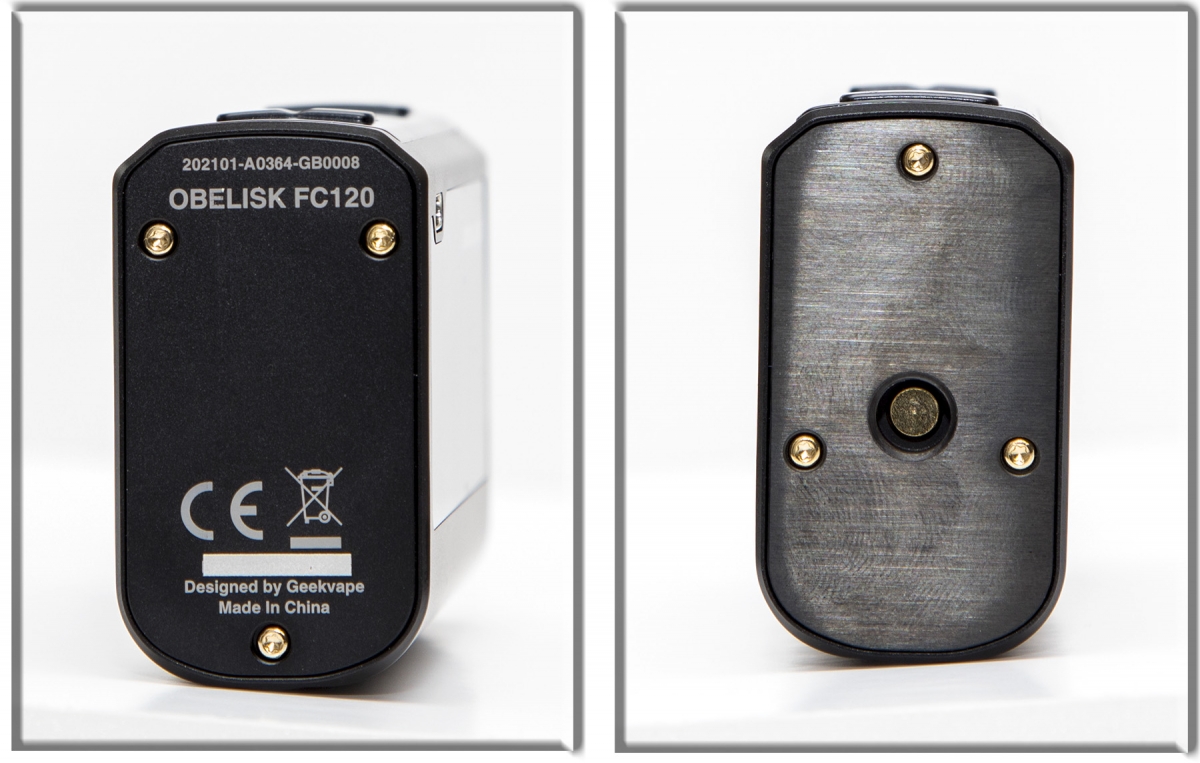 The top and base plate appear to be anodised with a brushed finish. The main snag is that there is no 510 disc so you can expect atty rash as you screw your tank on and off. Mine already has light circular scuffing on it, not that it shows once the tank is fitted but you would expect a modern box mod to have had some plating or a protection disc included?

With the all new Obelisk tank fitted it looks even more retro, I have to admit I like the look of it more than I expected. There’s a certain charm to it, the other colours appeal to me a lot more though. 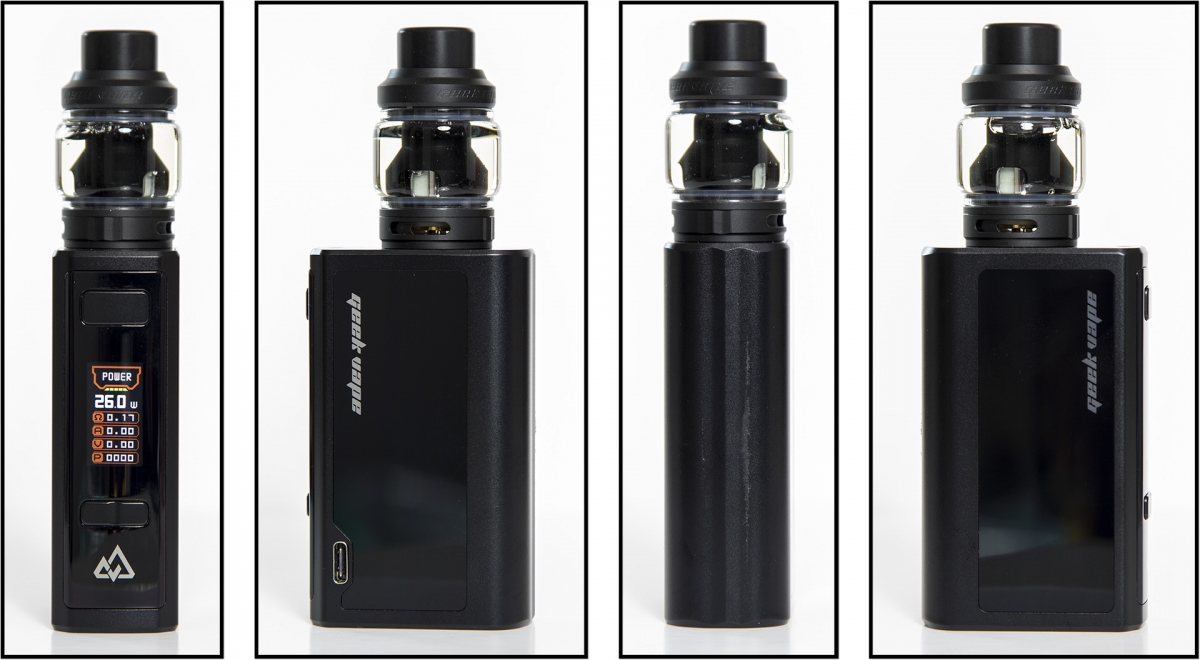 I found it a little strange that they placed ‘geek vape’ on both panels though, the name only appears on the base which is fine. The logo on the front looks good but I’m not sure what it is? It differs from the Geek Vape logo but is similar(ish). 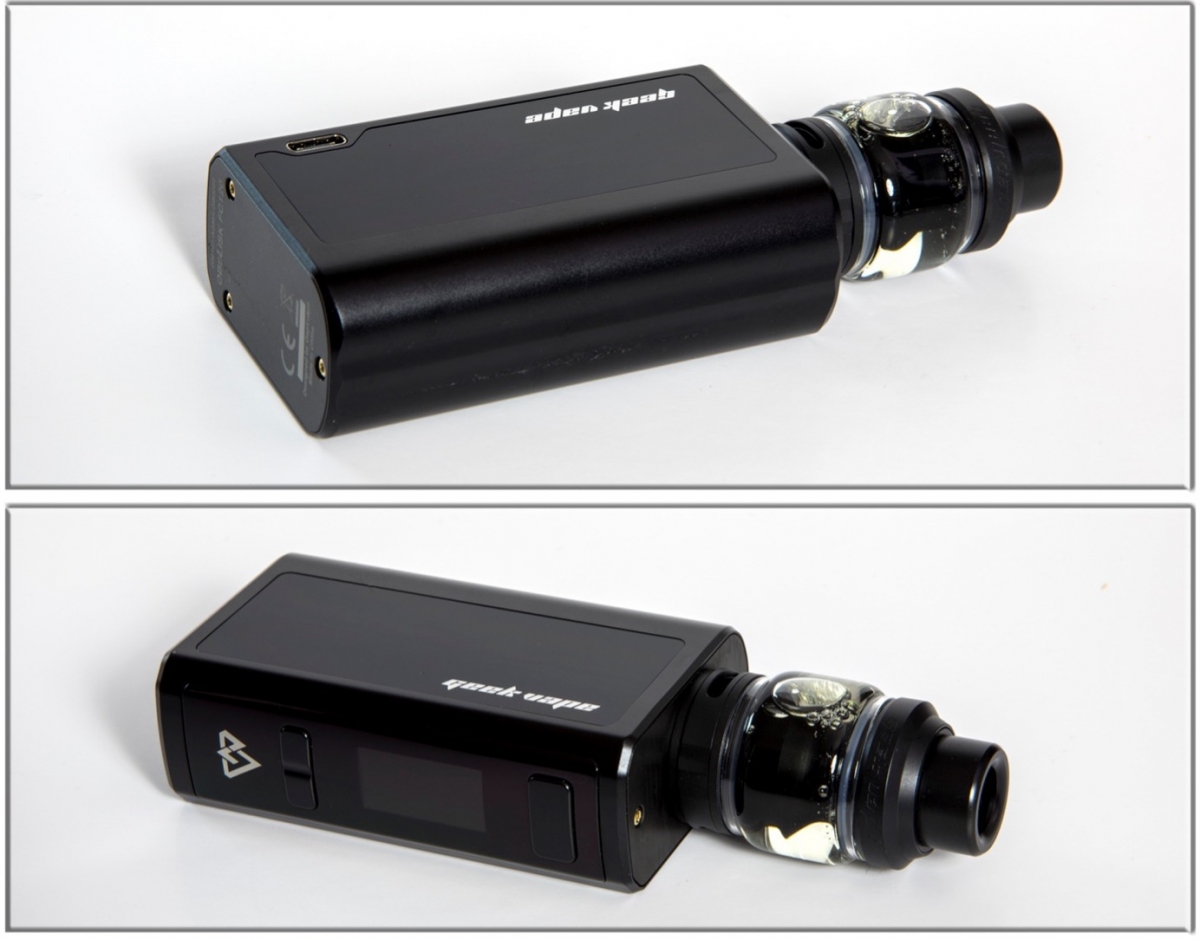 This tank has been obviously designed to match the mod, keeping it old-school and is quite plain. The airflow ring has the same pattern as the back edge.

On its own it looks a bit boring, but on the mod it looks much better. The tank strips down simply and with limited components which makes it easy to clean. 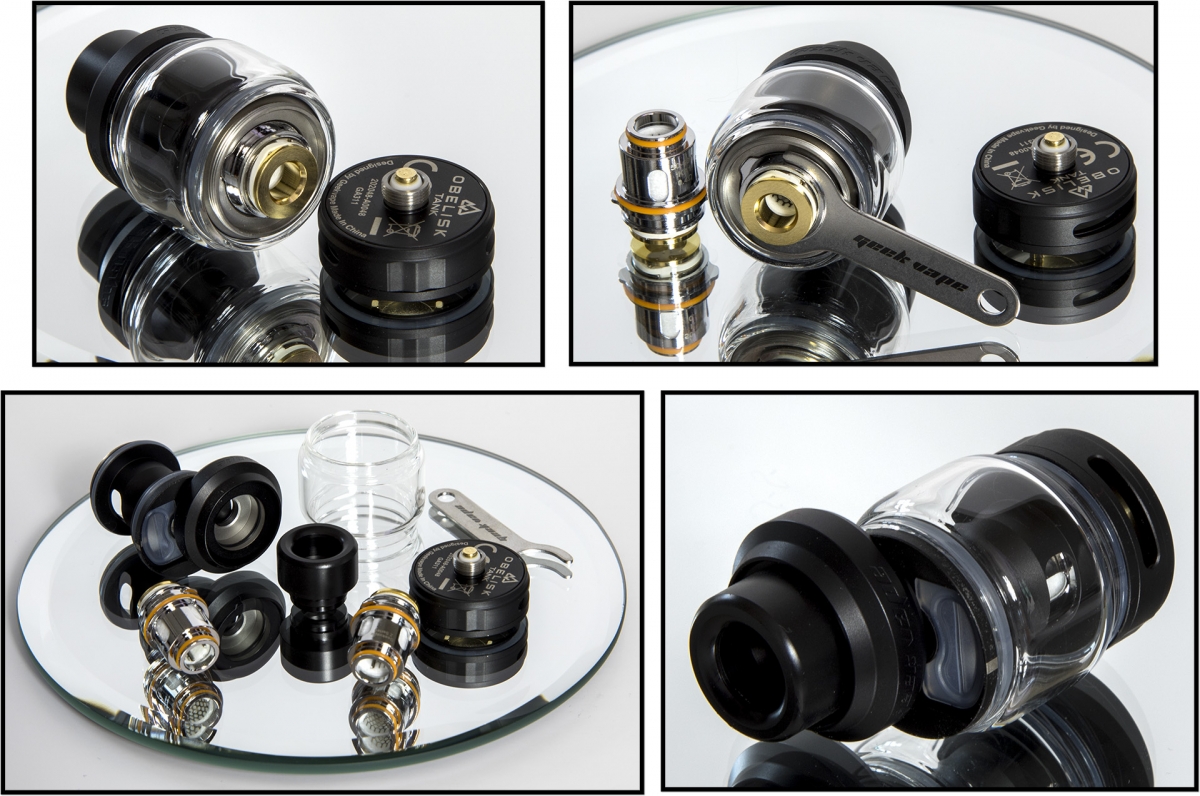 I’m really not sure about this tanks' design compared to the Zeus. Bottom airflow usually leaks when left unused for prolonged periods, especially large bore mesh coils. The other part I don’t like is that you have to use a tool to remove the coil, the included little spanner. I tried to pull the coil out without it but I couldn’t get a decent grip on it so I had to use the spanner.

The fill top cap is nicely done in principle, pull up and slide to open, but in practice there’s a snag. I really struggled to get a shortfill nozzle into the bladder, it’s doable but you have to wrestle with it – not good!

Coil wise, you get two different ones included:

These are cross compatible with the Zeus tank which is ideal. I have previously tested these coils and they are superb for flavour and vapour production, proper sub-ohm vaping, especially the 0.2ohm.

As much as I like the top airflow (leak resistant) Zeus tank, the Obelisk did give a more satisfying vape using the same coil. It seemed to give me more flavour but it was a bit noisier.

I do like the menu and navigation, no nonsense and easy, yet with all the features most users want. 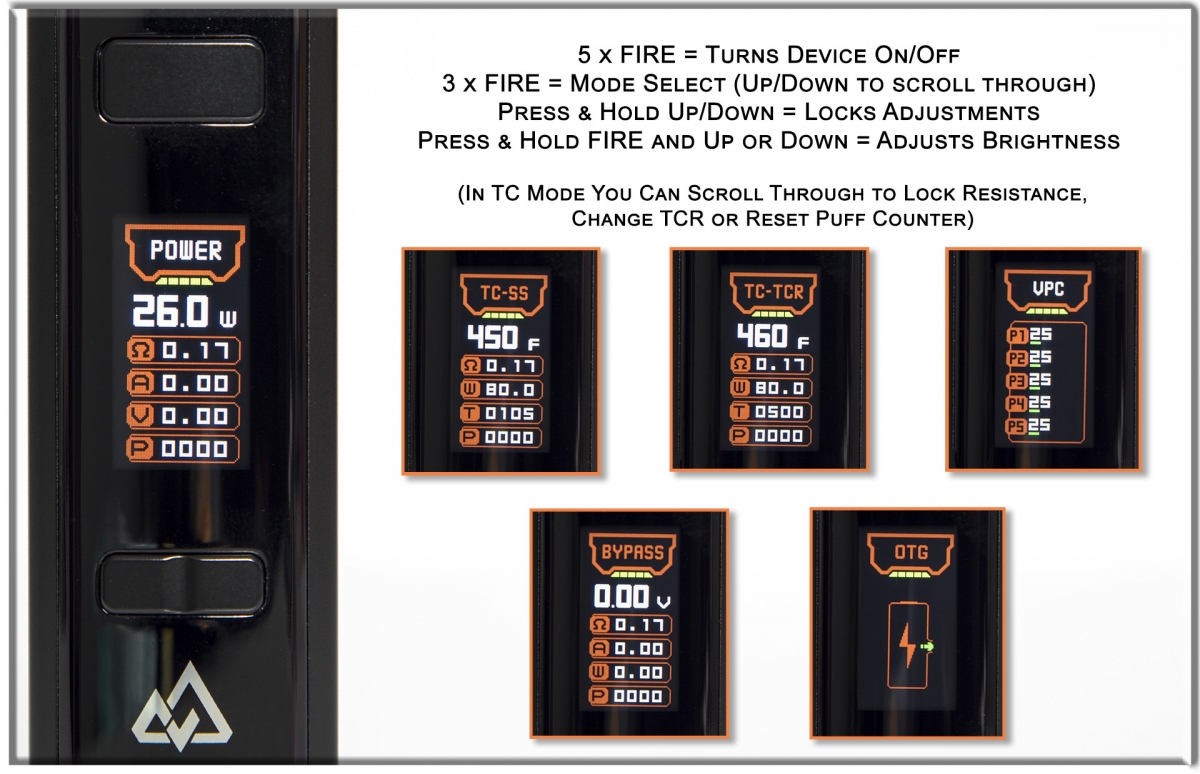 The screen is nice and bright at 100%, and the option to take it down to 1% is ideal for when you need to conserve battery life. It is also very clear with a good resolution and I could easily read it outdoors.

Vape innovation wise, there’s nothing new but that’s not a problem as it needs none. The innovation is in the OTG power bank. Initially I thought it would be a gimmick, but I actually found it to be really useful, especially for my pods which typically have low mAh capacity.

USB-C to USB-C worked a charm on my Joyetech ObliQ (yes I did choose that on purpose), it’s just really handy to know you have that extra power option, especially for me as I typically take a DL kit and a MTL pod/AIO with me on a typical day out.

It’s simple to do too, plug the cable into the two devices, select OTG in the menu, and press fire. I’m usually up to date with new tech but OTG is all new to me (I’m assuming OTG stands for On The Go?), a sub-ohm vape that’s also a power bank, what’s not to like? 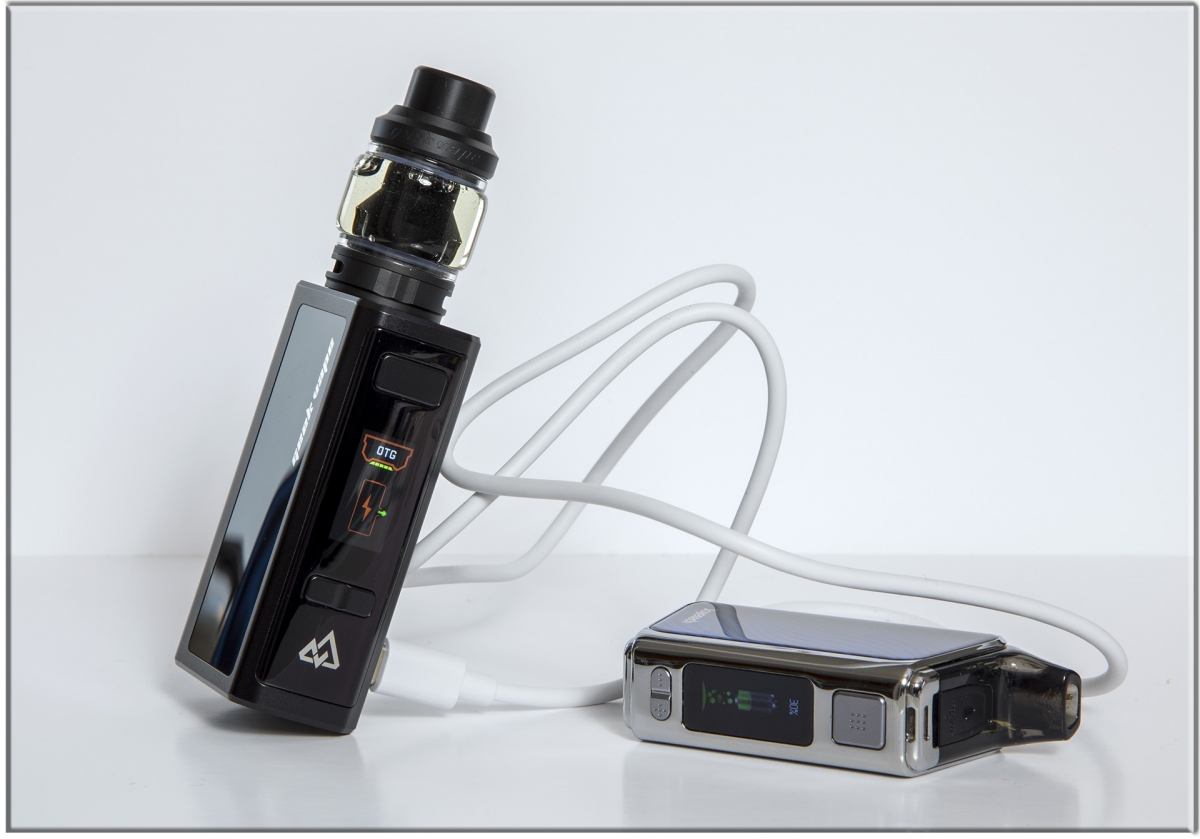 I tested the 0.2ohm coil out first. Starting off at 60 watts to ease the coil in, it was already bloody good! Bumping it up to 75 watts, I was really impressed with the flavour, and if you’re a cloud lover then you’re in for a treat.

The 0.4ohm coil wasn’t quite the same experience for me. I say that but if I only had the 0.4ohm coil included in the kit, I would still be raving about it. It’s just that the 0.2ohm is better if you’re after that full on flavourful, warm vape with plenty of vapour production.

There’s just something about this kit that feels and vapes old-school. I’ve only been vaping for four years, but it reminds me a bit like my first ‘proper’ sub-ohm vaping experience with a Smok T-Priv 2 which is what finally got me off the stinkies, not in the performance but in that really satisfying vape it gave back in its time. The tech and the coil performance have come a long way since then, and the Obelisk proves that with the superb all round vape it delivers.

I really wasn’t expecting to like this kit that much when I was photographing it, I was picking faults here and there, but once I started vaping it, I soon forgot about any niggles. I think this is a perfect kit for beginners as the direct lung vape doesn’t get much better than this and, from experience, newbies love clouds. I also think experienced vapers will appreciate the nod to past designs but with the performance and extras this kit offers. 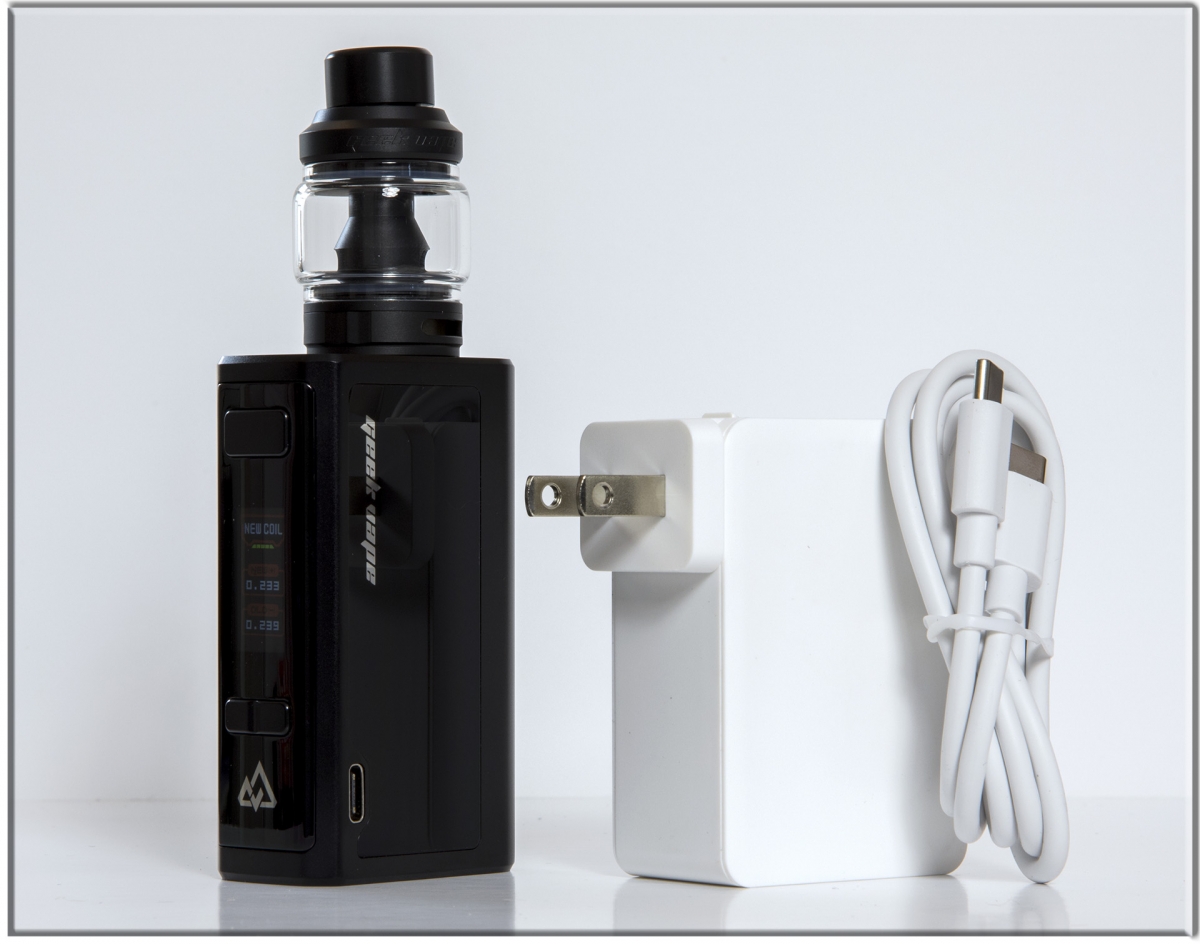 Though I find some of the niggles surprising for a company of GeekVape’s pedigree, the Obelisk soon won me over, and the important part of any kit is how it vapes. GeekVape have nailed it in that department.

The proof of the pudding and all that, I had already made my mind up that this kit was going to be given away, partly because it is black and partly because it’s just another Sub-Ohm DL kit which I have plenty of. But it turns out I actually want to keep it now (it was at this point I bothered to order the plug adaptor), I’m dying to test the fast charging out and hopefully we will see more devices include it.

I had every intention of recommending the ZEUS tank option due to it being top airflow and less prone to leaking, but after vaping the Obelisk with the same coils I’m not so sure. I actually prefer the vape the Obelisk gives. Time will tell if leaking becomes an issue, but that usually happens from leaving it unused.

Pricing could be an issue for some. I think the version that includes the charger is quite expensive when you can buy a similar charger for around half the price of the extra you pay to include it. If you already have a PD charging power supply, then the basic kit is good value.

Are the niggles deal-breakers? Only you can decide that, but after using it I can easily live with them. I’m really careful with my vapes so scratching shouldn’t be an issue, it would be less noticable with a lighter colour. The scoring will be difficult but should balance out overall.

This is one of the most cons I can remember in a review for a long time, but the thing is I still like it a lot. The vape is bloody superb and I love the battery tech and OTG option. For me to love a glossy black mod is rare, but the Obelisk has won me over. I have a feeling it will look a bit shabby by this time next year but hopefully not if I treat it with kid gloves. That alone will be a deal breaker for some, but as long as you can live with its flaws, you’re going to love the vape.

For me, the pros far outweigh the cons.

Thanks go to Health Cabin for supplying the GeekVape Obelisk FC120 kit for review.
https://www.healthcabin.net/geekvape-obelisk-120-fc-kit-p/26299.html?sscid=31k5_qs4dt 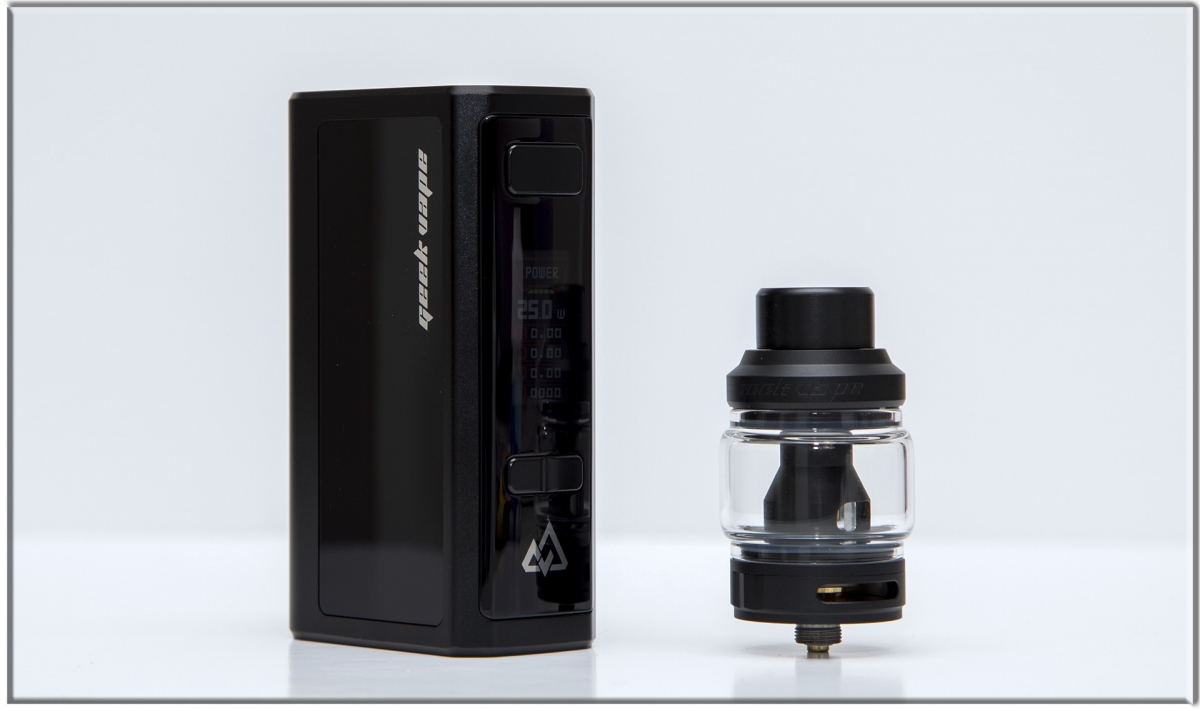