Many thanks to Premier E-cigs for providing the CoV Xion Subohm 240W kit for review. A quick introduction to Premier Ecigs, they were established in 2013 after the owner Peter successfully stopped smoking with the aid of ecigs. They have grown as a company and have recently joined the POTV vendors list where we wish them more success and look forward to getting to know the whole team better.

Premier E-cigs have kindly sent over the Council of Vapor Xion kit to review. Although released a couple of years ago, it is quite innovative for its time with its touch screen system. Please read on for my thoughts and experiences.

Removing the outer sleeve, with usual nicotine warnings front and back and content listing, you are presented with a large CoV logo and XION, embossed in silver. Removing the lid, you have the Xion mod on the right and Xilo tank on the left. The review mod sent was the black with metallic red accent frame and carbon inlay. The Xilo tank is also black with the same red accents on the airflow (AFC) and red O'rings. The other available colour is black, replacing the red with gloss black. Under the top tray, there is a mini usb cable, spare glass, extra coil, a bag of O'rings, and a spare top fill gasket.

First impression was how much, styling wise, it resembled the Smok Alien. Dimensions are almost identical, but the differences are apparent. The Xion has a normal fire button, and below that is a long fire bar for accessing the menu. Five clicks of the top button turns the mod on/off and fires the mod. Three clicks locks/unlocks the touchscreen allowing power/temp adjustments. The long bar uses three clicks to lock/unlock both buttons. Five clicks puts you into the main menu that can be navigated by the touch screen (ꓥ/ꓦ). There are five options for Mode, Boost, Display, Puff and Power off. There is also a Soft, Standard and Powerful mode, as well as a customisable power curve option. To enter sub menus, press the long bar. The menus/options are pretty self-explanatory, if somewhat cumbersome to navigate. Use the small button to step back and long button to select. When vaping, either button will fire, but to get the boost you need to press both simultaneously. The screen itself is clean and bright, although not the best in daylight as there’s only two settings. Across the top is resistance, amps and volts. Below this is the boost setting (%). In the centre of the screen you can see the wattage, the there is the timer above and puffs below and two battery meters separated by a lock symbol. A mini usb socket is located under the long fire button, and a spring loaded 510 thread sits off centre. It’s a shame the 510 wasn’t centred as it limits tank size to 25mm without overhang. The battery compartment is accessed by a push/slide door, and battery orientation is clear both in the tubes and on the door contacts. Once locked in place, it’s secure and there’s no battery rattle.

The supplied tank is a 22mm, 2ml top fill. The supplied coils are 0.4Ohm. This is a nice looking tank, with a simple design. On top is a 510 wide(ish) bore drip tip, although it can be swapped out for your favourite as long as it has o'rings. The fill method is top fill with a generous port accessed by sliding the cap which is marked with an arrow. It feels secure and hasn’t inadvertently popped open in use. There is no bubble glass option, so capacity is limited to 2ml. The coil screws into the base and then this is screwed into the top cap. In use I’ve had no leaking into the base. The AFC is easy to rotate and stays in place once your preferred airflow is found. Once primed and the tank filled up, time to see how it performs. The supplied coils are, rather bizarrely, rated between 20W and 80W. Setting off at 40W, and flavour was good with decent clouds. Going up through the power range, and flavour stayed good with the obvious increase in vapour production. With Boost set to 50% (default), firing was instant but it does run the risk of burning the coils. Forgetting to hit both buttons to activate Boost left an anaemic vape. I found my sweet spot at around 55W with 20% Boost resulting in a quick fire up and a strong hit when both buttons are not pressed. Sadly at 2ml, you’ll be constantly filling up as these coils do like a drink. Airflow can be set to a restricted DL vape or open DL, but it isn’t the quietest. This, along with a less than smooth airflow, is most likely due to the thin portion of the AFC ring splitting the airholes. It’s a case of functional design being overlooked for aesthetics. 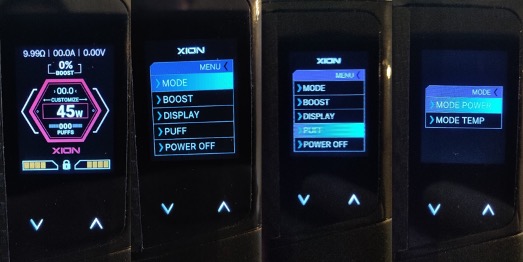 This is one of those kits that seem to have slipped under the radar on initial release. First impressions of the touchscreen operation was that it was cumbersome, but once I’d figured out what could be done, it actually became quite easy to use. The mod itself is very capable but the 510 location doesn’t lend itself to bigger tanks. Had it been centred, the 30mm wouldn’t look out of place. Saying that, it’s not too heavy to be used as a daily carry with either the supplied tank or, for more capacity, a 25-26mm tank. Battery life was excellent with the supplied tank, and battery cut off was the usual 3.2-3.3V. I didn’t try charging via usb, as always, if possible charge cells externally for safety reasons. Only thing that lets this mod down is the TC. Like the CoV Wraith squonker, there’s no way to adjust power. This means that regardless of temperature setting, this will output a pre-set wattage. On the Wraith it was 80W, so it burned many a coil/wick when using higher resistance builds. I did try a standard SS316L build, run on many TC capable mods for testing, but the initial power surge convinced me it was not going to be a good experience. As a power mod, I couldn’t fault it. The Xilo tank is a well built affair let down by the noisy airflow and tiny juice capacity. On further investigation, I did find the Innokin Axiom coils should fit if you require something other than the 0.4Ohm coil option.