Today for review we have the Aspire Zelos 3 kit which comes with the new Nautilus 3 tank. This kit was kindly provided to me by UK Aspire Vendor.

The Nautilus range of tanks and coils has been around for many years and been used by many vapers so I was interested to see how this new iteration would perform. The name Nautilus brings to my mind Nemo, the submarine captain from Jules Verne’s novels and not that needlessly over-dramatic clownfish. Nemo was a famed inventor so would this kit be something he would be proud of? Let’s take a look… 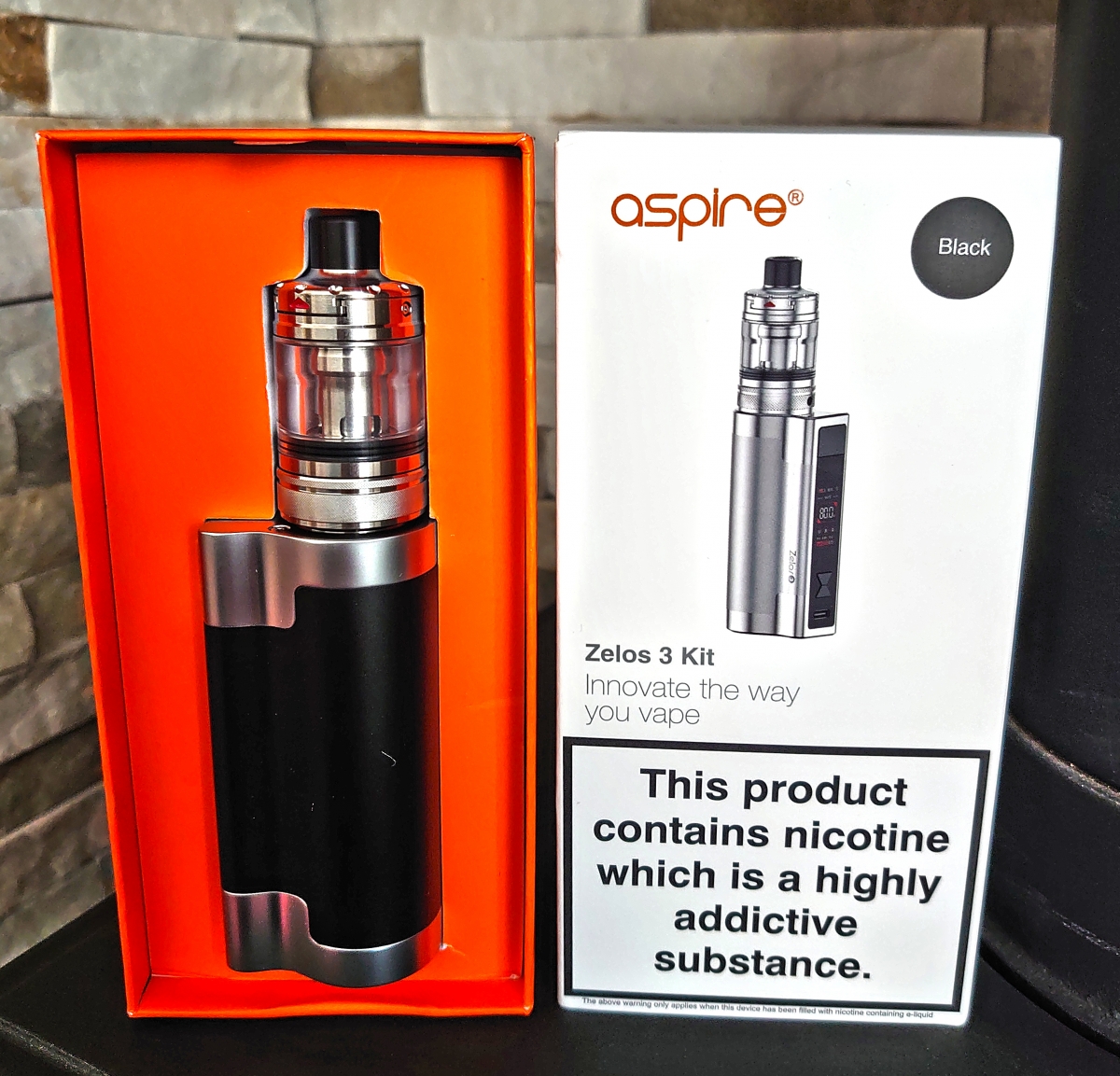 The box itself is pretty standard with a slide sleeve cover which then reveals the kit, standing tall there staring at you waiting to be tried. The rest of the contents are hidden underneath and all included in the kit are:

The kit is available in six colours – blue, red, pink, gunmetal, silver and, the one I was sent, black. 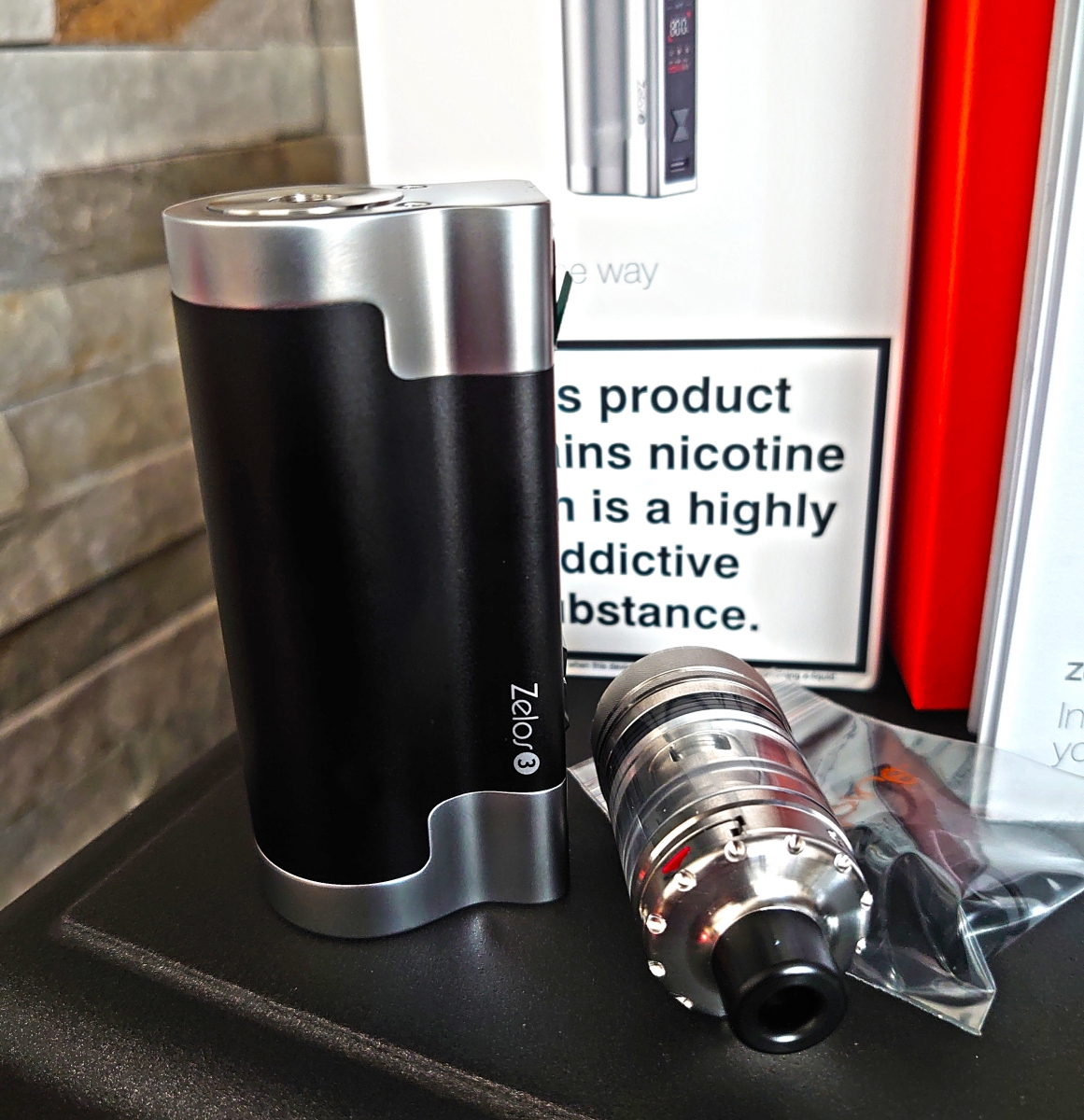 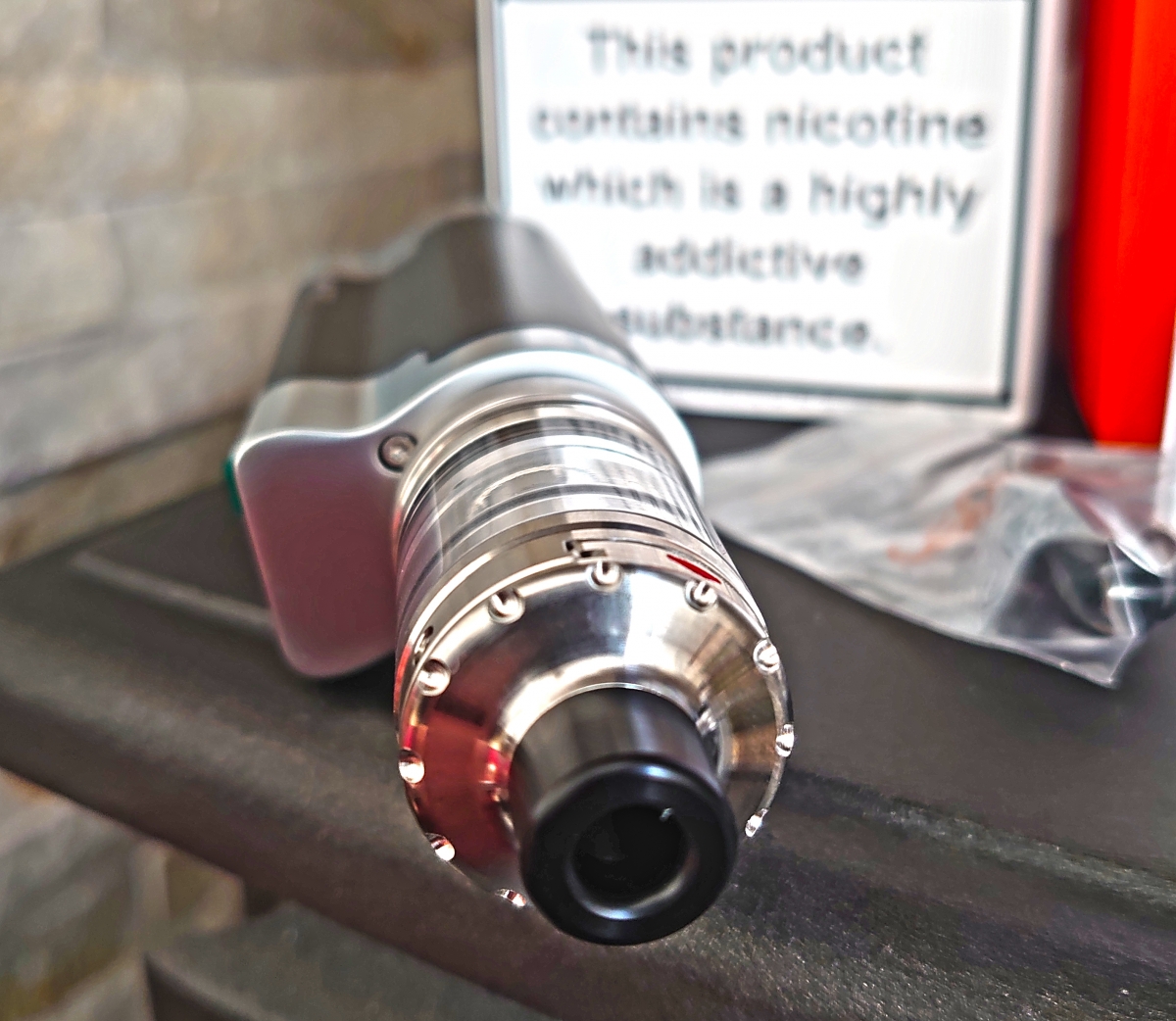 When you take the kit out of the box for the first time you’ll notice a few things, first that it’s quite heavy due to the size of the internal battery, second that the finish on the mod is really smooth and almost feels silky, and third the tank (I’ll come onto the tank later).

Remember that silky smooth finish on the mod? It’s like how I imagine stroking a penguin fresh from the Antarctic seas feels. It’s just a delight to feel in your hand, and for me it looks as classy as the same penguin wearing a cravat, not something you see very often but damn it’s eye-catching when you do. The curve of the mod makes it nice and ergonomic to hold, the fire button and up/down buttons are all a decent size and nicely responsive, and the screen is crisp and clear. There seems to be a trend with branding these days where the name of the company or device is in your face with some looking more like an advertising board than a mod, but fortunately Aspire didn’t get over-zelos here and there’s just a small “Zelos 3” on one side and for that I applaud them. It keeps the looks of the device simple but oh so elegant.
The mod is superbly made and easy to use for beginners along with modes like TC for the more advanced vaper.

To turn the Zelos 3 on, there’s an On/Off switch on the bottom which I really like as I’ve never really been a fan of the whole five clicks on/off system. A simple flick of the switch and off you vape. 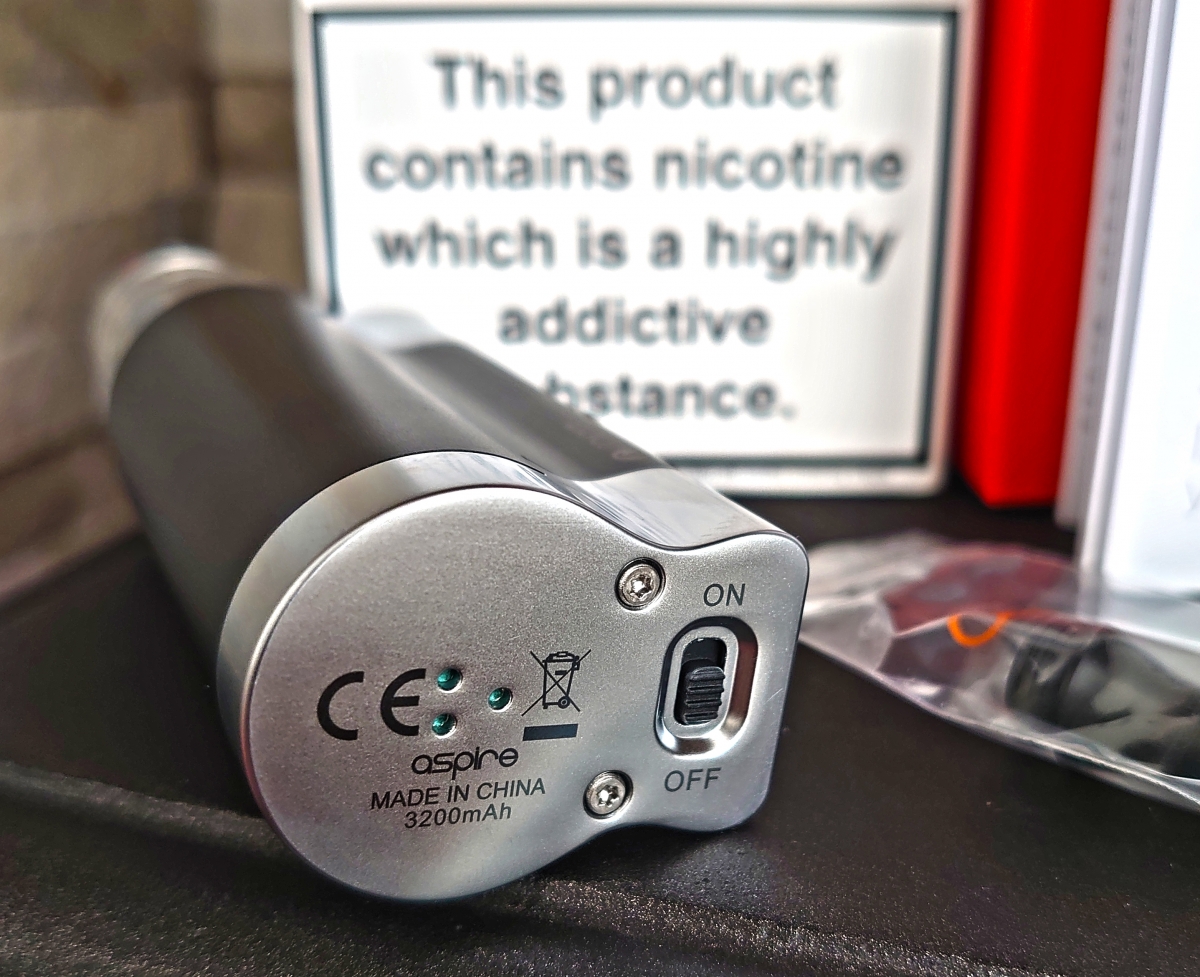 With the mod on, use the up/down buttons to adjust the wattage from 1W up to 80W in 0.5W increments and fire to erm, fire. Pressing the fire button three times locks the wattage buttons, and three more unlocks them again. Pressing fire & down resets the puff counter, and pressing fire & up opens up the menu. The menu is easy to navigate. From here you can select the mode (wattage, voltage, bypass, TC, TCR, CPS), but using anything other than wattage, you are going to have to have some experience already as there are absolutely no instructions on how to use these modes on the user manual. Within the menu you can adjust the brightness of the screen and also select the colour you want with a choice of orange, blue and green. These are simple but nice touches and I found myself changing the colour between green and orange quite often just because I could. The screen itself shows the battery level with a bar and the %, whether the buttons are locked, the wattage/voltage/temp/amp, the coil resistance, puff counter and puff length. It seems a lot to display and it is, it was fine for me but it left me wondering how someone with less than perfect eyesight might fare with it. The other thing to note with the screen is that even at full brightness, it’s still quite difficult to see in bright light. I took it out on a sunny day and I could barely make out what was being displayed. The screen also gets marks and scratches quite easily. I’ve had this out and about in my bag and my pocket and there are quite a few marks on the screen where it’s been scratched. These are not massive issues individually, but over time it may affect your ability to view the screen so it's just something to be aware of.

The Zelos 3 in use does exactly what you want, select your output and fire away. It ramps up pretty quickly, can hit all the way up to 80W, and the battery size is pretty capable – using this at 13W, I was getting about 2.5 days out of one charge and the battery charged from flat to full in less than 90 minutes. 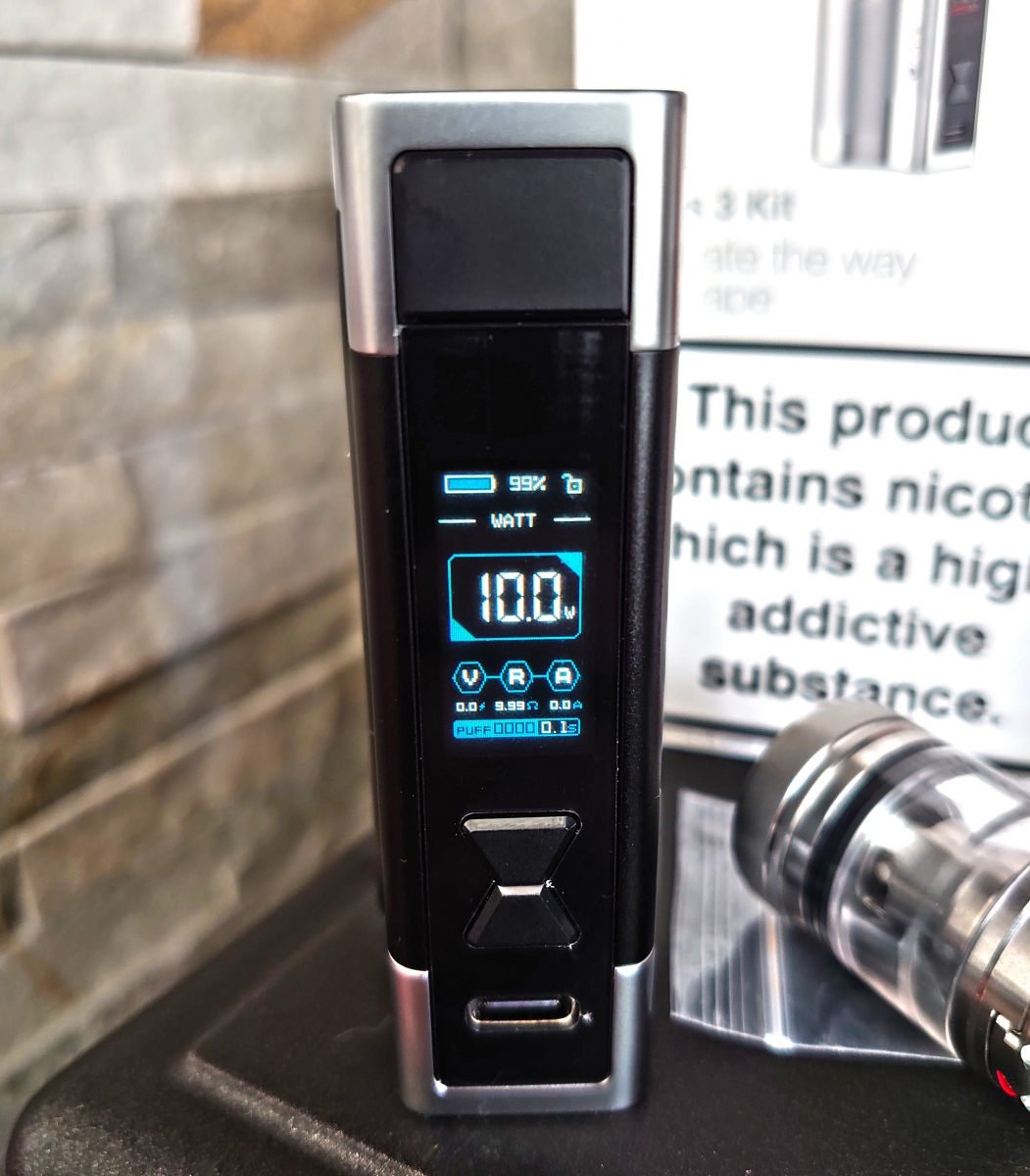 You’ll notice that the Nautilus 3 is a 24mm tank which is rather large considering it has a 2ml capacity, and that size is down to the thickness of the glass. Whether you like the looks of this tank or not will be down to you, it’s quite large and really rather brutal. If you’re a fan of brutalist architecture like Preston bus station then you’ll love this, but personally I found myself rather ambivalent towards it’s looks. My wife has been telling me for years that beauty is in the eye of the beholder and that it’s not looks but what’s on the inside that counts, so let’s see how it functions. To fit the coil, you unscrew the base and just push the coil into place then screw the bottom back on, it’s that simple. They’ve implemented a no leak system for when you change the coil. When you pull the coil out, there’s a small barrier that drops down to cover the holes so that no liquid leaks out, and when you push a new coil in, this lifts to reveal the wicking ports. I like this kind of system and it makes it very easy to replace a coil with a full tank.
The tank is top fill, find the little red arrow and slide the top open to reveal the fill port. The sliding mechanism has a nice resistance to it to prevent accidental opening but not so much that it’s stiff or too tight, it strikes a nice balance. The fill port itself is a reasonable size and will take most bottles without too much of a problem.
The airflow they’ve implemented is one I really like and has a good range from wide open enough to get a decent RDL draw to being able to get tight, cheek sucking MTL draw. You twist the airflow ring at the bottom to reveal a series of airflow holes from 3mm down to 0.8mm, and again the resistance is just right. Depending on what kind of draw you are after, you get two drip tips, a smaller bore curved MTL one and a wider, shorter one more suited for RDL, but it’s a 510 so you can use you own if you wish.
The tank is well made, easy to use, the airflow in use is nice and smooth, and I’m pleased to report I have had absolutely no leaking from this tank at all. A huge plus for this tank is that it will take ANY Nautilus coil so grab your favourite and pop it in. 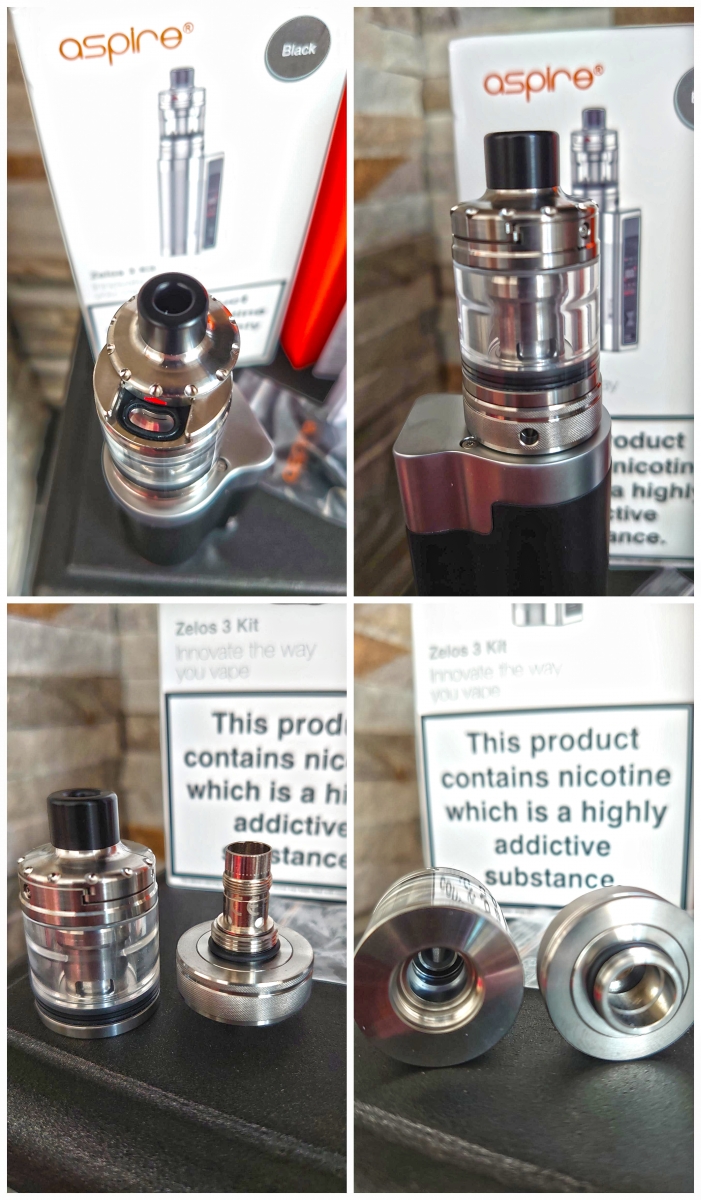 The Kit In Use

First up I loaded the 1.8ohm coil (rated 10W–14W), primed it and filled the tank with some Crème De Tabac. Gradually upping the wattage and adjusting the airflow, I found my sweet spot was 12.5W with the airflow at the 1mm hole. This gave me really good flavour and a lovely smooth draw with a nice throat hit and a decent balance of tones from the liquid between the tobacco and the cream. I was impressed by the draw, smooth, silent and good flavour. At this wattage, I got 2-3 days out of the battery and a week out of the coil so I was left pretty impressed.

Next I cleaned out the tank, fitted the 0.7ohm coil (rated 20W–25W) and filled it with Unicorn Shake. Slowly cranking up the wattage, I started to get good flavour at about 14W, and at 17W and with the airflow set to the 1mm hole I found this suited me best. It’s a nice, smooth, flavourful MTL vape. I don’t normally vape MTL at this high wattage, but I was getting really nice flavour from it. I upped the wattage and opened the airflow to see how it fared for RDL, I found that the airflow was plenty for a decent RDL draw but I found that it lost a little of the flavour compared to having it lower and using it for MTL.

When you get the Zelos 3 kit in your hand, you will feel just how nice the mod is to hold and how good it looks. It fires fast, it is simple enough for a beginner to use, and has enough modes to keep an experienced vaper happy thanks to the great ASP chipset. The battery capacity is big for an internal battery. There are some nice features like the on/off switch, the ability change the brightness of the screen, and overall I am really taken with this mod and will be continuing to use it daily. It’s not perfect though, the screen can be difficult to see when out in the sun, some may struggle to read everything on the it, and the ease in which it scratches isn’t great.

The tank is big and brutal but very solid and clearly very well made, the airflow is superb, the coil change system works well as does the sliding top fill. The fact that it takes the entire Nautilus range of coils is a massive plus for this, giving a great flexibility to suit almost any vaper. The coils supplied with the kit are good and provide a vape with flavour and a nice draw, but as this takes any Nautilus coil, you can grab your favourite and really enjoy a thoroughly good vape from this excellent kit. It’s safe to say that I’ve been really impressed by this kit but I’m gonna leave the final words to DJ Pied Piper and the Master Of Ceremonies who I think say it best…. 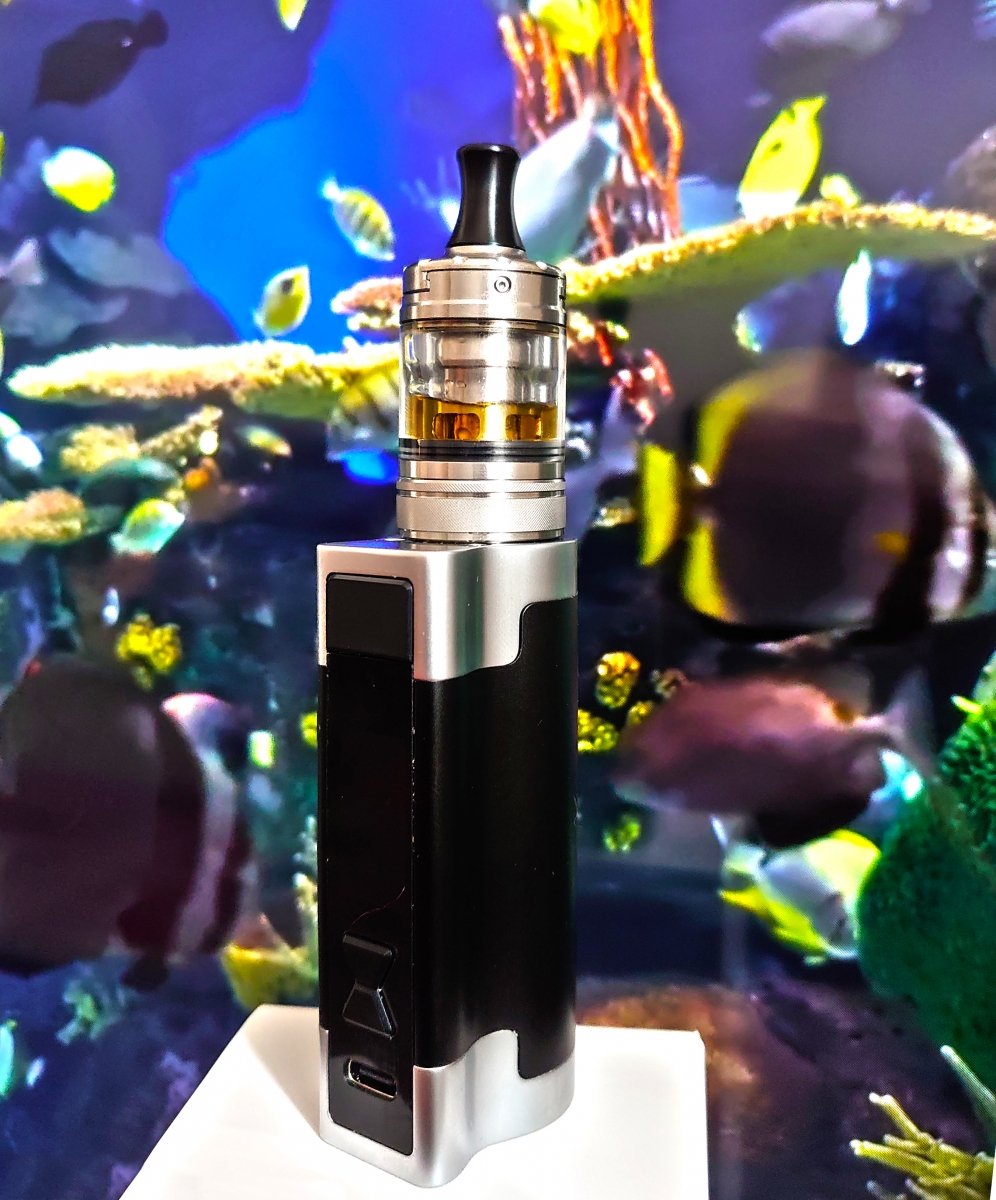