Pastry Chef E-Liquids by The Lab Review by Pugs

Pastry Chef E-Liquids by The Lab

Many thanks to Can Vape Distro UK for providing these for review.

Welcome once more, my steamy little juice junkies, back again with more of the same claptrap that will try its damnedest to alleviate some of the boredom that has the vast majority of us clinging to our last strand of sanity with one hand whilst reaching for the last bottle of wine to pour on our fifth bowl of breakfast cereal with the other…..no?....just me then?.....K…

And what do I have for you today that will put a pause in your path of self-destructive alcoholism and upcoming obesity? Well it might take your mind off the drinking, but judging by the name of this particular range of liquids from those Northern Ireland based mixologists known simply as ‘The Lab’ …..they might just make you even more hungry!

Coz sure, that’s gonna help a whole bunch right now. I don’t think my treadmill has had this much ‘use’ since I bought the damn thing, if you can call it use.

So let’s get into it, because let’s be honest, typing this out is probably the only exercise I’m going to get today, and as much as I’d like to give you a little insight into the what ‘The Lab’ are all about, their website is kinda scarce with useful information. What I can tell you however, is that this is one of quite a number or ranges to come from the guys and gals at The Lab, They come in four mouth-watering, waist expanding flavours, are 70vg/30pg 100ml short fills, and are aptly named ‘The Pastry Chef’. 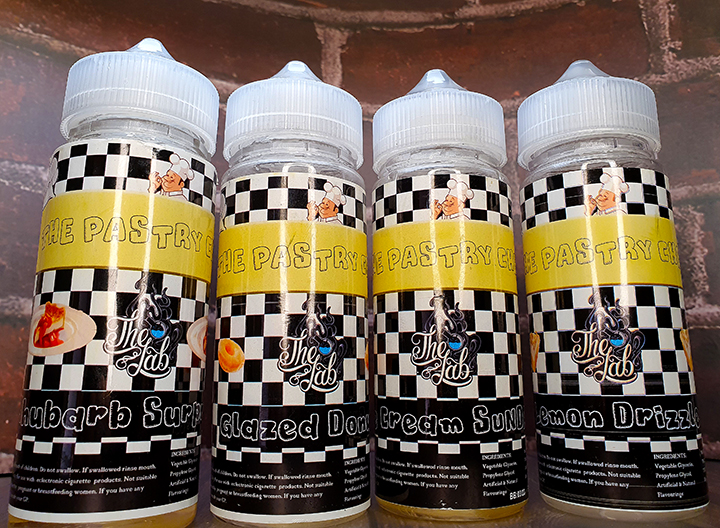 I say ‘aptly’, I should probably say ‘oddly’, as none of the four flavours actually have pastry in them, well maybe one…hard to tell, but we’ll get to that.

First up we have their rendition of a Lemon Drizzle cake. Now ’Lemon Cake’ liquids these days are ten a penny, ever since Dinner lady slammed their Lemon Tart liquid on the table of the vaping universe, pretty much every big player in the industry has done something similar. I must have tried a gazillion of them over the years as well as mixed more than my fair share, and I can tell you now…it’s actually quite hard to find a bad one. You might get the odd one that tastes of lemon pledge polish, but generally, they tend to be quite palatable, and this one is no different. I’d even go as far as to say that it’s above average.

On the inhale, it’s all lemon, but there’s a slight bitterness to it which I actually like, it makes it taste more authentic to me, almost like a traditional cloudy lemonade, and then as the flavour develops in your mouth you get a mild cake flavour which stops the lemon from becoming too tart. It’s not a super strong cake flavour like some I’ve tasted, but it’s enough. Then on the exhale it’s ALL sugar, so sweet it leaves a coating on your tongue that hangs around for a bit. Definitely one for the sweet toothed amongst you and a well-balanced lemon cake all-rounder. 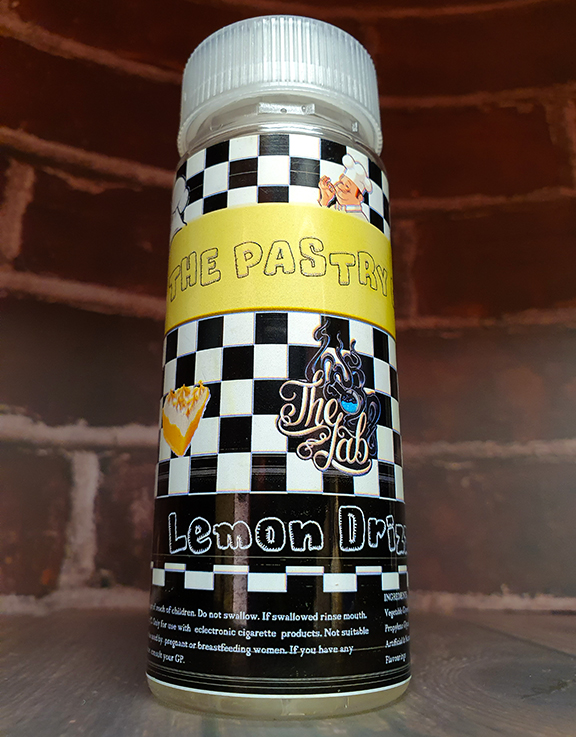 Now for me personally, donut juices can go either way, again. I’ve tried a lot of them, but some tend to be a bit too ‘bready’ for my taste. If I want to taste a donut, I want to taste the ‘fried’ more than the ‘bread’, it’s just the fat [email protected]$tard in me, what can I say. I’ve also failed in my attempts to mix a decent one. However with this one, it’s gone in a direction I haven’t tasted before the bread, or dough, is there, but it’s mild, which is good for me, but Jesus Christ is this liquid sweet! I get it, it’s glazed, therefore covered in liquid sugar, but this is like licking the glazing right off a donut…

On the inhale, you get a slight doughy taste coupled with a crispy fried mouth-feel, not too strong, but the whole thing is enveloped in sugar as you exhale, leaving your mouth tingling with a sugar coated sweet overload. I love sweet juices, but man, this tests even me. I was expecting this to be a big coil killer but to be honest, I didn’t notice if this was any better or worse than any other liquid. I’m guessing they used stevia of some sort instead of sucralose, but I couldn’t know for sure. 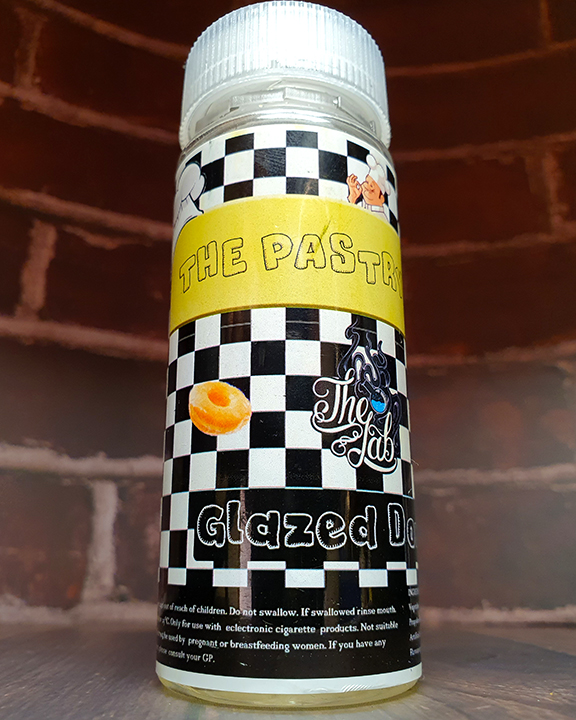 The surprise is it tastes like Banana…..just kidding! But that’s exactly why I don’t have my own juice line, because I’d probably do that. Instead, this claims to be a rhubarb and custard with something a little extra..

Custards are right up my street, and when I was a kid I was an absolute beast for those little rhubarb and custard boiled sweets, so although I don’t generally vape rhubarb juices, I was intrigued by the description of this one.

Straight off the bat, you get the rhubarb, but it’s not too tart like some can be, as seems to be the case with this line of liquids from The Lab, they’ve toned down any tartness by adding a generous helping of sugar into the mix which really rounds it off. I didn’t get too much in the way of custard, more a mouth-feel than an actual taste, but it’s definitely a lot creamier than the others and you really get that on the exhale. A well balanced rhubarb juice but I have no idea what the ‘added extra’ is. I thought it might be pastry? But I can’t tell, I still like it, it’s not too sweet to be sickly, a possible ADV for dessert lovers. 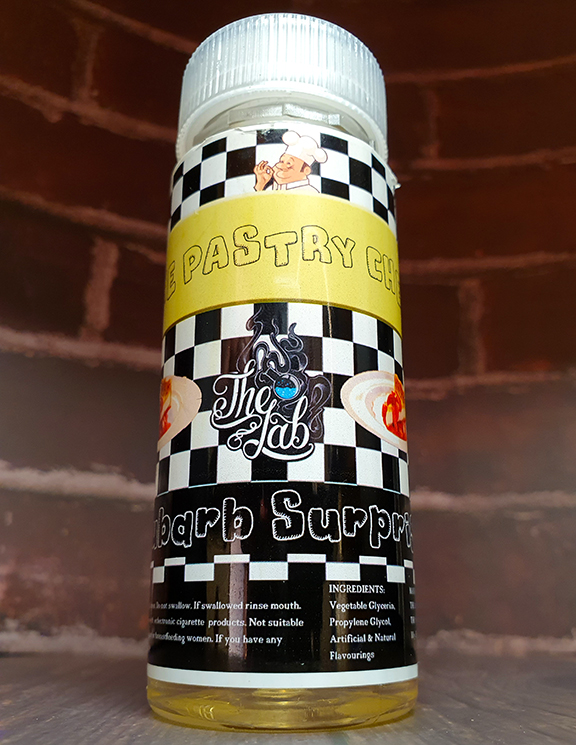 Ok, now we’re cooking, ice cream liquids come in two categories for me, ‘OMG that’s amazing’ and ‘OMG are you f*&king kidding me’, and I’ve never met anything close to middle ground. Probably 50% of the liquids I mix for myself are worked around an ice cream base, in other words, I absolutely love the stuff. But it’s a cream, therefore not the easiest thing to get right, too little flavour and you don’t taste it, too much and, oddly, you don’t taste it. Creams have a nasty habit of masking out anything you were trying to achieve if you get a little over zealous with the quantities of concentrates whilst ‘chefing’ your little heart out…

That being said, I haven’t tried one that tastes like this before, which I have to say was actually a pleasant surprise. This, it appears is my middle ground, tipping slightly to the ‘OMG that’s amazing’.

On the inhale, it reminds me of those plastic cone ice creams that had a bubble-gum in the bottom I used to get from the ice cream man as a kid, it’s almost like a ‘candy’ ice cream as opposed to a cornish or vanilla bean ice cream, and it’s sweeter (obviously, I mean why wouldn’t it be), and there are also hints of a syrup in there, maybe strawberry? It’s so mild that it just lends a fruity back note that’s more noticeable on the exhale, but it’s there, and the whole thing is carried along with a lovely creamy, thick, full bodied mouth-feel, it’s good, not incredible, but not far off, so much so that I actually tanked the full 100ml in four days. 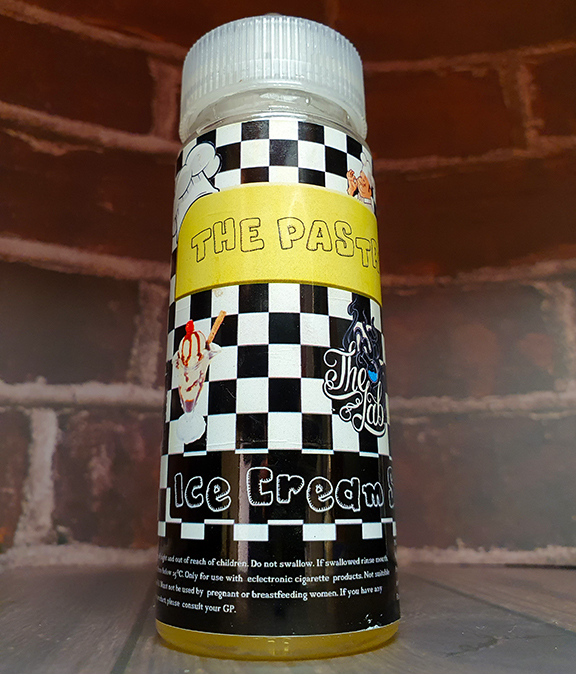 Anything that comes under the guise of desserts or bakery or even dairy has me dribbling from the corner of my mouth. It’s very much where I'm at when it comes to a personal flavour profile, so to say I was looking forward to trying this range is something of an understatement, and I’m happy to say, I wasn’t disappointed in the slightest.

The full range is almost definitely geared towards the sweet toothed vaper, which I most definitely am, with exception to the glazed donut, which is clearly made for maniacs who used to crunch sugar lumps as a child. They taste authentic, they are all well balanced in terms of flavour, and they are all made with high quality ingredients, you can just tell.

As we all know by now, taste is entirely subjective, but ‘The Pastry Chef’ range by The Lab is a well concocted collection that would suit any dessert vaper, The Lab obviously know what they are doing unlike some outfits, and I for one will be keeping an eye out for any more dessert ranges that come from them. I just probably would of called the range something else seeing as there’s no actual pastry to be found.

Price wise they seem to be bang in the middle, 120ml will sent you back £15 from Can Vape Distro UK

So that’s my early morning workout done, my fingers have never felt so…pumped (?), so….I bid you farewell as I adjourn to the kitchen for a little something that has become a bit of an isolation tradition over the last few weeks, something that we as a family used to call lunch…. 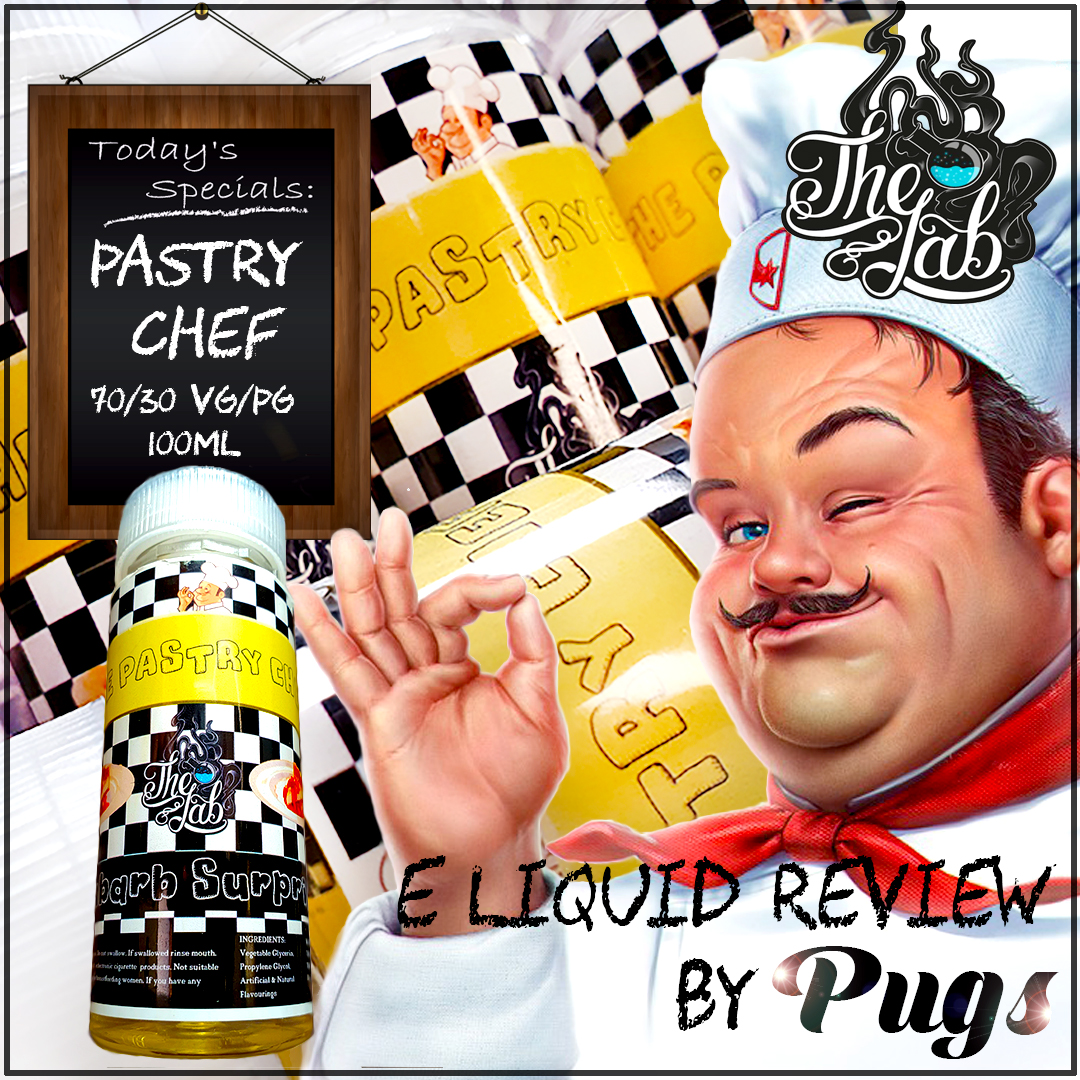 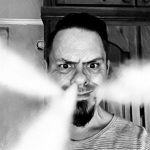