Spiritwalker is the brand new and exciting dessert based range developed by the visionaries at Manabush, renowned for stellar tobacco based juices such as the wildly popular Powwow Sauce and Chiricahua Sun. One of the most striking aspects about Spiritwalker is that for the first time the team at Manabush have released not only one or two new juices, but a whole range of tobacco free juice... 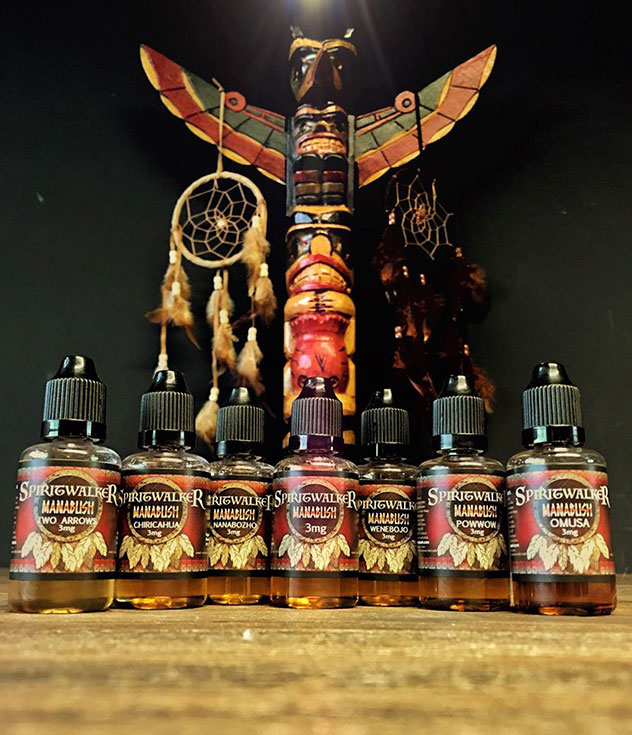 Pause to take that in for a second. Manabush without tobacco? Sacrilege! However, if anyone can take a huge bold step such as this and pull it off with aplomb it will be the Manabush team. A whole new base has been conjured up, in the form of Spiritwalker, and it gives a passing nod to Nokomis, the original Manabush base, however it's a whole new base for the range. The mix ratio has shifted from 50/50 to 60vg 40pg, to add a delicate smoothness to the juices. There's old classics reimagined without the presence of tobacco, a very bold step considering the huge loyal fanbase Manabush has already garnered, and brand new flavours that have all the potential to be classics in their own right.

If you have never had the absolute pleasure of vaping Manabush before or been put off by the tobacco connotations, then Spiritwalker may well be what opens your mind to Manabush. It's produced in a clean room environment, from only the finest ingredients around, and it's available now in nicotine strengths of 3mg, 6mg, 12mg and 18mg, read on to find out more... 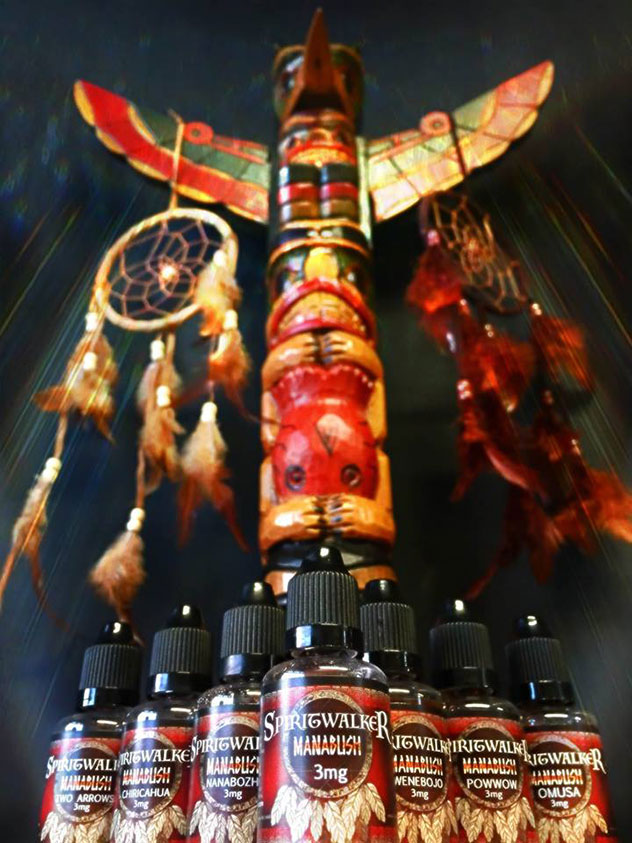 The Spiritwalker base flavour, containing a lot of the same flavour notes as Nokomis - minus the tobacco and blended with a nutty, caramel biscuit base.

Spiritwalker has been formulated to be the base to the Spiritwalker line of juice, yet like Nokomis before it, Spiritwalker is delicious enough all on its own. Nutty, oaty biscuit with a touch of sweetness, almost a hint of maple and caramel, wrapped up in a creamy smooth package. You get the dryness of the biscuit, then the sweetness comes to the fore, and if the base on its own is this good, then we have a hell of a treat in store here!

Our famous classic "Powwow Sauce" re-imagined for the tobacco-free Spiritwalker base.

Now many of us share an affinity with Powwow Sauce that borders on obsession, for many this would have been their first foray into Manabush, for many it was their first foray into Tobacco based juice full stop. Considered by many to be their favourite juice of all time, and one of the most highly regarded juices of all time, Powwow Sauce occupies a big place in many people's hearts, so reimagining it is always going to be a huge gamble. Powwow Sauce is a juice well worthy of being deemed otherworldly, a truly rich, complex and deep juice that everyone seems to get different flavour notes from.

Thankfully, the Spiritwalker version, renamed simply Powwow, is one that certainly doesn't disappoint, and almost offers a different perspective on the juice we know and adore. The custard notes from Powwow Sauce take prominence here, there's an added creaminess to the juice that almost makes it reminiscent of custard sandwiched between two sweet biscuits, with a helping of caramel spread across the top. This is a juice that will stay with you long after you finish vaping it, such is the majesty of this concoction. So incredibly gorgeous, and wonderfully moreish too.

The two sharp tangs of Rhubarb and Ginger freshen up the sweet Tobacco-free Spiritwalker base.

I must confess to having been privileged enough to have tried this juice during the testing phase, and was taken aback at the realistic Rhubarb and Ginger flavour notes combined with a hint of cream found within. Two Arrows is a brand new flavour combination developed by the Spiritwalker team, and these Two Arrows hit their mark.

Realistic, rather than artificial, Rhubarb and Ginger combine with lashings of cream and the Spiritwalker base combine for a dessert based treat that can be enjoyed at any time of day. Rhubarb comes in strongly, yet without being overbearing, on the inhale, the exhale provides a tantalizing mix of ginger and cream.  It's an out of the ordinary mix that provides an extraordinary vape!

Our Dark Rum, Toffee and Vanilla gets twisted up in this tobacco-free Spiritwalker based cocktail.

I do have to say it, but I certainly believe that in my opinion, Omusa is actually a touch better in Spiritwalker form! I've found that the switch from the tobacco base used originally just adds an extra layer to this already superb juice, and the gorgeous toffee found in the original version takes on a new form and is even more indulgent, making Spiritwalker Omusa a truly fantastical experience.

Your taste buds will be blown away by the combination of dark rum, vanilla and toffee, each of those flavours taking prominence individually as you vape Omusa at different temperatures and with different builds. I've found a lot cooler temperatures/ lower power the dark rum is the most identifiable flavour, with a touch of melt in your mouth toffee on the exhale and vanilla holding everything together, raising the temperature / power allows that gorgeous melt in your mouth toffee to take centre stage. The rum is one of the most ambitious parts of this juice, yet the rum never gets too strong or overbearing, it's an excellent and necessary part of this delightful combination.

The Spiritwalker edition of our luxurious realistic banana - Nanabozho.

Nanabozho is a juice that just seems made for the Spiritwalker base. What you get here is a very realistic banana, combined with creamy caramel undertones and topped off with biscuit on the exhale. It makes for a gorgeous dessert vape, if you have never tried the original Nanabozho you won't quite believe just how realistic the banana tastes here.

If you are a banana nut, then Nanabozho is the juice you've been searching for. It's quite unlike any other banana vape out there!

Maple and Pecan gloriously compliment the Spiritwalker base.

And gloriously compliment the Spiritwalker base they do. Maple is a key feature of Nokomis, the original Manabush base, and here it shares the stage with a glorious Pecan flavouring, the two flavours combining to provide a juice almost reminiscent of a luscious Pecan Pie.

Wenebojo was the first of the Spiritwalker juices that I ran through a mesh build in the In'Ax MKIIr, and my oh my does this suit mesh down to a T. The Pecan and Maple almost take on a whole new form, and the smoothness of the juice just accentuates the whole experience perfectly. In the Snapdragon RDA, the flavours combine with the base to provide a delight to your tastebuds you will sit back and savour with a smile on your face. Really magical stuff

Chiricahua Sun gets a lighter nuttier Spiritwalker makeover - The tobacco free version of Chiricahua Sun.Chiricahua Sun is revered by many vapers in much the same way as Powwow Sauce, personally with its drier, nuttier edge Chiricahua Sun is not only my own personal favourite of the Manabush range, but my favourite juice full stop. I must admit to a hint of trepidation when trying Chiricahua freed of tobacco, but my were my fears washed away instantaneously...

The flavour profile found within Chiricahua Sun is made for the Spiritwalker base, the dry nutty mix complimenting the creamy caramel biscuit base. There's dryness on the inhale with the nuttiness, on the exhale your mouth waters with a sumptuous sweet caramel. I enjoyed it that much, my 10ml bottle was done within a few hours. A truly groundbreaking liquid. 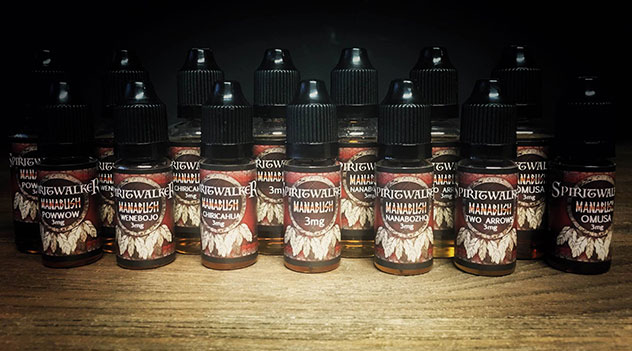 2015 has been a vintage year for eliquids but as it draws to a close, I believe Manabush Spiritwalker is the very best release of the lot this year. I must admit to a sense of trepidation when I first learned that my favourite eliquid line was going 'tobacco free' in the form of Spiritwalker, yet from the very first taste all apprehension was laid to rest. I never doubted the master mixologists at Manabush could pull off such masterful alchemy, and create not one or two legendary new juices, but a whole new range that will surely go down in the ages, especially now that a whole new consumer base is opened up to the delights the Manabush team provide. Spiritwalker is absolutely not a Manabush 'lite', but a new and exciting direction for Manabush that opens up a whole new wealth of possibilities. The switch to a 60/40 mix still retains throat hit, yet adds more vapour and a delicious smoothness to the juices. The trademark complexity of Manabush juices is present in Spiritwalker, and you can go on a flavour journey unlocking new flavours by changing the wattage, I'd highly recommend vaping Spiritwalker at a higher wattage than you would have previously vaped Manabush juices at, should you have vaped them previously. I've found a good starting point to be 5w above what I previously vaped Manabush.

The attention to presentation that the Manabush team are known for is present and correct here, from quite possibly the best label designs out of any juice in my opinion, to the dreamcatchers included in the presentation box when you order the whole range. It really makes you feel like a valued customer.

Those who have avoided trying Manabush previously due to the tobacco content can now revel in the delights produced by absolute classics such as Nanabozho, Powwow Sauce, Omusa and my own personal favourite, Chiricahua Sun, alongside new delights like Spiritwalker, Wenebojo and Two Arrows. It's an outrageously good line of juice with outrageously ambitious flavour experiences you won't get anywhere else, crafted by the masters at Manabush. One of the hardest parts for me when writing this review was deciding on which one I preferred the most. Whereas with the original Manabush range, I can say Chiricahua Sun is my favourite, followed very closely by Powwow Sauce, though I still vape the entire range too, with Spiritwalker I genuinely can't pick a favourite. They are all incredible juices in their very own right whether vaping in tank, genny or dripper.

Let Spiritwalker guide you on a beautiful sensory experience that no other eliquid can provide, a truly delightful experience your senses will thank you for, time and time again.

The Spiritwalker range can be found alongside the seminal original Manabush range at www.manabush.com, where POTV12 will get you 12.5% off your purchase! Martyn at Manabush has also very kindly agreed to give away a box containing a dreamcatcher and the entire awesome Spiritwalker range in a nicotine strength of the winners choosing, enter through the competition here - the competition will run until the 25th November.