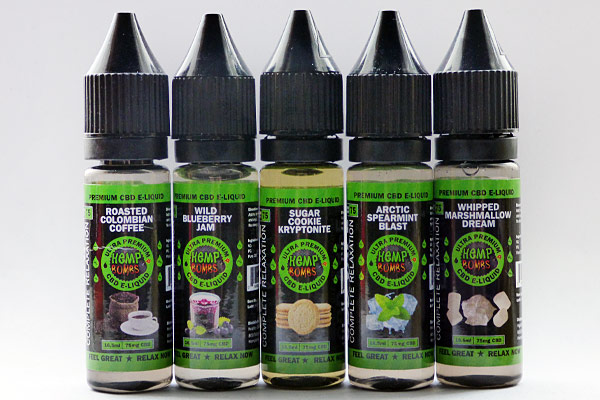 Hemp Bombs E-Liquids offer a range of flavors so “vapers” can benefit from the health-boosting benefits of CBD.

Hemp Bombs E-Liquids are an American company specialising in CBD E-Liquid. CBD or Cannabidiol as it is commonly known is derived from Cannabis or Hemp. To be fully legally compliant the CBD used in these E-Liquids is sourced from the stalks of low-THC, Industrial Hemp. CBD has been found to have many therapeutic effects for its users because of the way it interacts with the body’s Endocannabinoid System. Some of the reported benefits are better sleep, pain relief, and overall improvement in mood.

Hemp Bombs CBD E-liquid “CBD Vape” is fully legal for consumption and distribution, and will not flag on drug tests. Manufactured from pure CBD Isolate at over 99% purity Hemp Bombs CBD-Liquids are tested both internally and by third parties for quality and consistency.

Now I’m sure a lot of readers who are unfamiliar with this product will be wondering if it’s safe or addictive. Rest assured it is completely safe, thoroughly tested and recognised as alternative pain relief. In no way will it get you high or addicted so you have nothing to be concerned about.

CBD-E Liquid will not get you “high,” at least not in the way that THC does. CBD has a different effect than THC in that it is not psychoactive, and does not give you the “high” feeling. The receptors CBD pairs with are located all over the body, and it is more likely to see benefits such as better sleep, lower inflammation, and pain relief than any sort of “head high.”

There are eleven different flavours in this range, all of which come in a PET bottle with a child proof top cap. The labels are bright and colourful with all information clearly marked. Each bottle holds 16.5ml of liquid and is mixed to a 70VG/30PG ratio to ensure excellent cloud production.

I tried out all of these flavours sent for review in my Titanium Mods Ukraine Achilles II RDA, fitted with a 1.0ohm coil wicked with Kendo Vape Cotton. Keep in mind that these E-Liquids have no noticeable throat hit due to fact that they don't contain any nicotine.

This juice offers an enjoyable creamy marshmallow flavour. In my opinion it definitely does taste like marshmallow and almost has that powdery quality to it. I rather liked it but ideally would have liked the mix to offer a little more, perhaps combined with a strawberry or chocolate. As it stands it’s a decent enough flavour and will suit anyone with a sweet tooth who loves marshmallow!

Due to the high VG content the vapour production was great.

In my opinion this liquid offers an extremely good and very natural coffee flavour. It is very much an Espresso style vape which is ideal for someone like myself who hates lightweight coffees. One major bonus is that unlike typical coffee E-Liquids which are usually dark in colour this CBD juice is completely clear and does not gunk up coils quickly. Personally I really enjoyed it and found this my clear favourite of the five juices I tried.

Vapour production was excellent and not surprising given the high VG mix ratio.

While it might sound like Lex Luthor has taken up baking in a nefarious attempt to mess with Superman, this E-Liquid is actually rather pleasant. It offers a slightly sugary cookie flavour with a hint of creaminess.

The ingredients tasted realistic but I didn’t find it overly strong in terms of flavour even when used in an RDA. If you prefer mellower flavours then you’ll certainly like this and as an all-day CBD vape it should be very suitable. Vapour production was great!

Given the name of this juice I was expecting a seriously cold vape but that was not the case at all. In fact it’s extremely mild and there was no noticeable cooling effect. So what you really get here is a vape which has a spearmint taste but won’t produce any form of throat hit or face freezing effect. Unlike a typical minty E-Liquid it won’t even help to clear your sinuses. Essentially the pleasant spearmint taste while enjoyable enough just does a really good job of masking the taste of the other ingredients, and the mildness makes it perfectly suitable as an all-day vape. Providing you don’t vape this expecting a typical menthol style E-Liquid you won’t be disappointed.

This juice offers a pleasant enough blueberry jam flavour on the inhale but I personally would have preferred it to be a little sweeter. In comparison to typical blueberry E-Liquids I might vape this one does seem somewhat bland. In addition I can taste something in the background when vaping perhaps the VG or even the Cannabidiol and to an extent it undermines the flavour for me.

Now this does lessen as you crank up the Wattage which to be honest was the best way for me to vape this particular flavour. Since we all have different tastes I would still say that it would still be worth trying out if you enjoy blueberry vapes, and to be honest most people who vape this are after the effect of the CBD rather than the flavour itself. Vapour production just like all the other flavours I tried was superb!

I was certainly open-minded enough to try these CBD E-Liquids out but I find it hard to say if they had any definable effect on me. The thing is I’m not in any pain beyond the typical muscle and joint aches a person my age occasionally gets. To be fair perhaps to some extent vaping these liquids did relax me a little and I can actually happily vape them and not immediately feel like I’m craving to go back to something with nicotine in it, but in the end I eventually will because I do like my nicotine fix.

However giving it full consideration one of my major problems is that I am a very analytically minded person and I tend to overthink just about everything. It is totally in my nature to be this way but as you might expect this can be very stressful at times. What I do notice when I vape these CBD E-Liquids is that I stop that overthinking. It doesn’t impede my ability to function but I must admit it’s really quite pleasant not to have a ton of different ideas floating around my brain for a change. To get myself in this state by other means I have to either listen to relaxation music, meditate or self-medicate with several doubles of single malt. Therefore I think it’s fair to say these liquids at least do something and sort of mellow me out.

Whether this is enough of a result for me to go out and purchase some I haven’t truly decided, but I think it might be useful to have a bottle or two lying around. I’d personally like to try a stronger CBD vape simply because I’m curious and want to discover if it’s really is doing anything.

Given that I don’t feel that much benefit from these liquids I let my Dad try some. Now my Dad has had two hip replacements, several Angioplasty and has terrible pain in one foot to this day, due no doubt to the NHS leaving him waiting so long. As you’d expect he suffers from a great deal of pain, so was more than willing to play the lab rat and give these CBD liquids a try.

I set him up with a Berserker MTL filled up with the Roasted Columbian Coffee fitted to an Innokin Kroma-A. For the record my Dad gave up smoking several years ago and will not go near anything that contains nicotine. He used the liquid regularly but did not exhaust the 2ml tank in the three days he was using it (actually this made me release just how much I vape). He said that in no way did he feel addicted and in his own words, “could happily take it or leave it”. In his opinion he was very impressed with the coffee flavour and actually liked it. Another thing he pointed out was that the act of vaping did not feel like smoking to him and surprisingly this CBD liquid is the only time he’s ever tried vaping. Most likely due to a willingness to give anything a go if it helps the pain go away.

Sadly as for noticeable results it ultimately did nothing for him. He said himself that it didn’t help to relax him nor take the edge of any pain. Now to be fair these liquids are only 75MG of CBD and I suspect my Dad would need a much stronger dose which could be very expensive. Nevertheless by at least trying these out it has him now considering if a stronger dose might serve as suitable alternative pain relief, and money isn’t that much of a factor to him if the product actually works.

In my opinion if you are looking for a milder CBD E-Liquid that is reasonably priced and has a wide range of flavours, these are certainly well worth considering!

While it might seem like I have been somewhat critical regarding some of the individual flavours, my reasoning behind that is because I have to compare them to the tastes offered by existing E-Liquids. Nevertheless it’s pretty much a moot point since you will be primarily wanting them for the CBD and its potential benefits, rather than as gourmet E-Liquids.

As for the benefits I feel your mileage will vary but providing you have an open mind I would say that you lose nothing by trying them. Who knows they may in fact help you. Alternatively it might also encourage you to consider other CBD products. At the end of the day I think they’re at least worth a look!

Many thanks to hempbombs.com who kindly sent these E-Liquids to Planet of the Vapes for us to review. For your chance to win all five flavours covered in his review please see our competition.