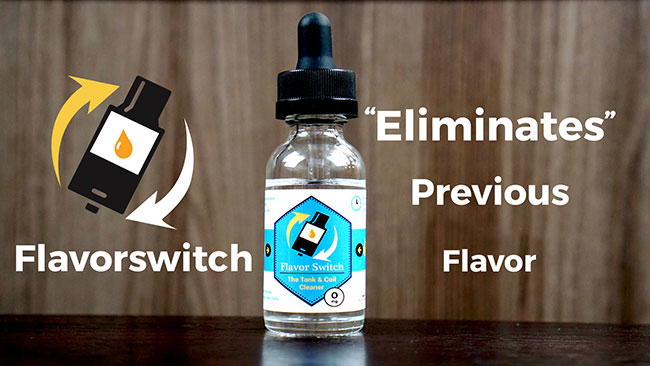 Produced by Canadian company iBliss one of the largest e-liquid manufacturers in Canada, Flavor Switch is just one of the many products they produce inside their 20,000 square foot FDA registered facility. I'll also be looking at a couple more from these guys shortly in upcoming reviews, such as The Original Cannoli, Wat a Waffle and Magic Island.

Flavor Switch is touted as a revolutionary new product, sold in a 30ml bottle free of nicotine with a 70/30 VG/PG ratio. It claims to be able to neutralize and eliminate all lingering flavours from your coil and tank, keeping it fresh for the next flavour and even extending the lifespan of your coils. It’s safe to vape as well, having no taste itself.

Is Flavor Switch genuinely a revolutionary product is this another gimmick? Let’s find out... 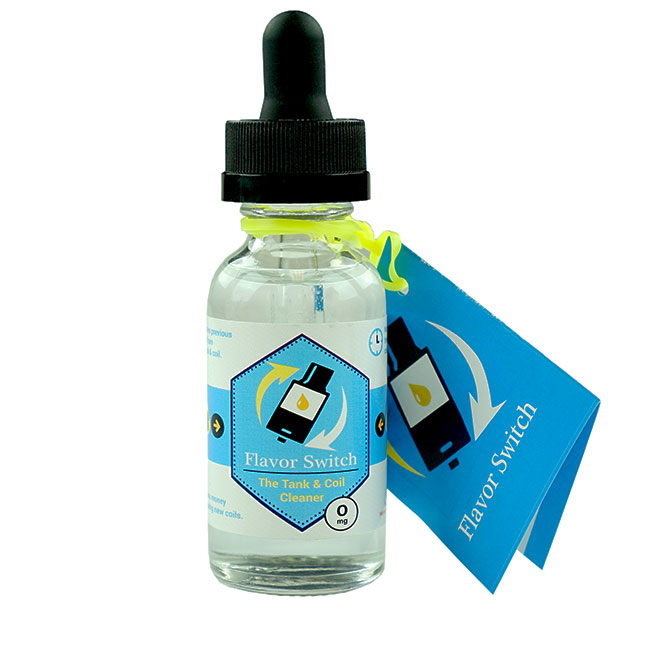 Flavor Switch is an easy product to use, you simply fill your tank up with a small amount of the solution after finishing your tankful of juice, or drip a few drops onto your wick when wanting to change juices. It's safe to vape, with it being a 70/30 nicotine free colourless solution, and there's only a small taste of sweetness from the VG. After a few puffs on it, you are ready to refill with your new juice. Flavor Switch extends the lifespan of your coils too, as it binds onto the previous flavours and sugars contained in your e-liquids and dispatches them. After filling with a new juice, it is like vaping on a fresh build.

The key selling point with Flavor Switch is its ability to fully cleanse your coil and tank to remove any traces of the previous juice. I tested a range of different juices, with the previous flavour being eliminated each time, however the real proof in the pudding was when I tested House of Liquid El Toro Perique in my Rose3, usually after vaping a tankful of this I need a full rebuild of my tank as well as a thorough cleaning of all parts, let alone a wick change! I put around a quarter of a tankful of Flavor Switch into the Rose3, and as if by magic, all previous traces of El Toro Perique had gone. I filled up with El Diablo Sweet Voodoo, which couldn't be more of a different flavour profile to El Toro Perique, and it was just like vaping Sweet Voodoo on a fresh build. Magical stuff!

I’ll admit to being skeptical about what Flavor Switch could actually do however after using it pretty frequently, I’ve become a big fan. It genuinely does eliminate even the strongest residual flavours from your tank and coils, and allows you to enjoy your e-liquids without having the residual flavours from the previous juice you vaped creeping in. Flavor Switch even does increase the lifespan of your coils, as I’ve noticed less gunkage and build up on them after using Flavor Switch.

Price wise, at £10 for 30ml in the UK, Flavor Switch is definitely a luxury product and priced in line with many 30ml bottles of UK made e-liquid, however that 30ml should last you much longer than a 30ml bottle of juice would, as you won’t be using it as often. That is unless you switch flavours around ten times a day! I vape pretty heavily and got a good few weeks out of my bottle of Flavor Switch, so you do get your money's worth there.

I believe it will appeal to those that use pre made coils more, as users of rebuildables tend to rewick pretty often, however if you do use pre made coils Flavor Switch is definitely worth looking into as it will extend the lifespan of your coil heads, meaning you don't need to buy as many, saving you money in the long run!

Many thanks to www.tradevapesupplies.com for giving us Flavour Switch to review, for wholesale enquiries please contact Ash on [email protected].