I don’t know about you, but I’m fed up of 50ml bottles of shortfills as they work out more expensive and there is more plastic for the dolphins to chow down on, so it’s a welcome change to get some 100mls to test. The only downside of buying 100ml bottles is that if you don’t like the flavour then that’s a waste also. Luckily for you, we at Planet of the Vapes will discover if the Bomba Shortfill range from Drippin' Junkies are tank fuel or sink fodder.

Basically they are flavoured eliquid but with no nicotine, so you have to add your own ‘nic shots’ which are 10ml bottles of unflavoured juice but with 1.8% (18mg) of nicotine. Shortfill bottles usually leave you enough room to add enough nic shots to make 3mg strength. 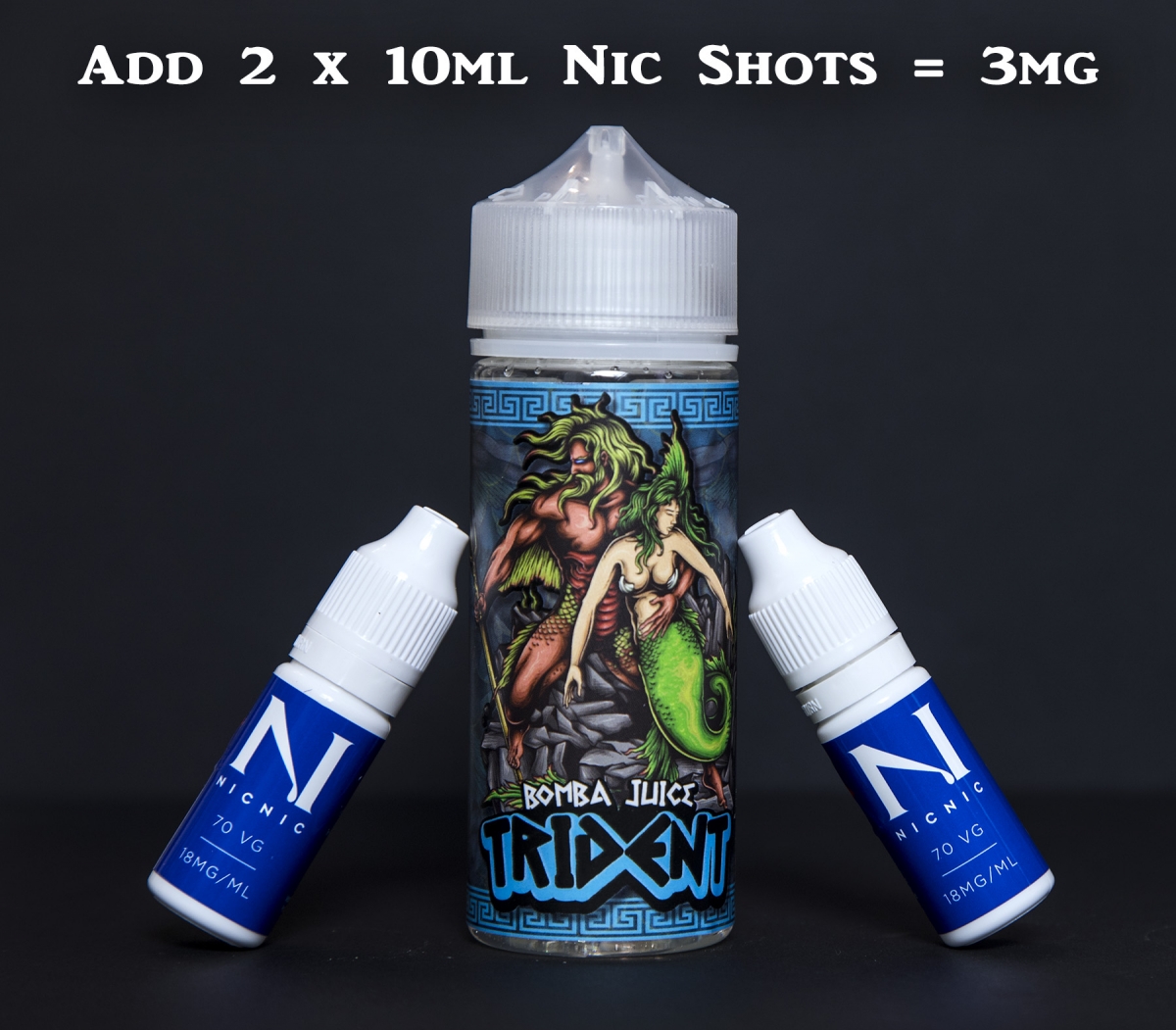 The Bomba bottles are nice and easy to do this, there’s a little indent under the nozzle cap which you can use a coin to flip the cap off, just take care to have a firm hold on the bottle unless you need some slip-n-slide liquid on your floor. 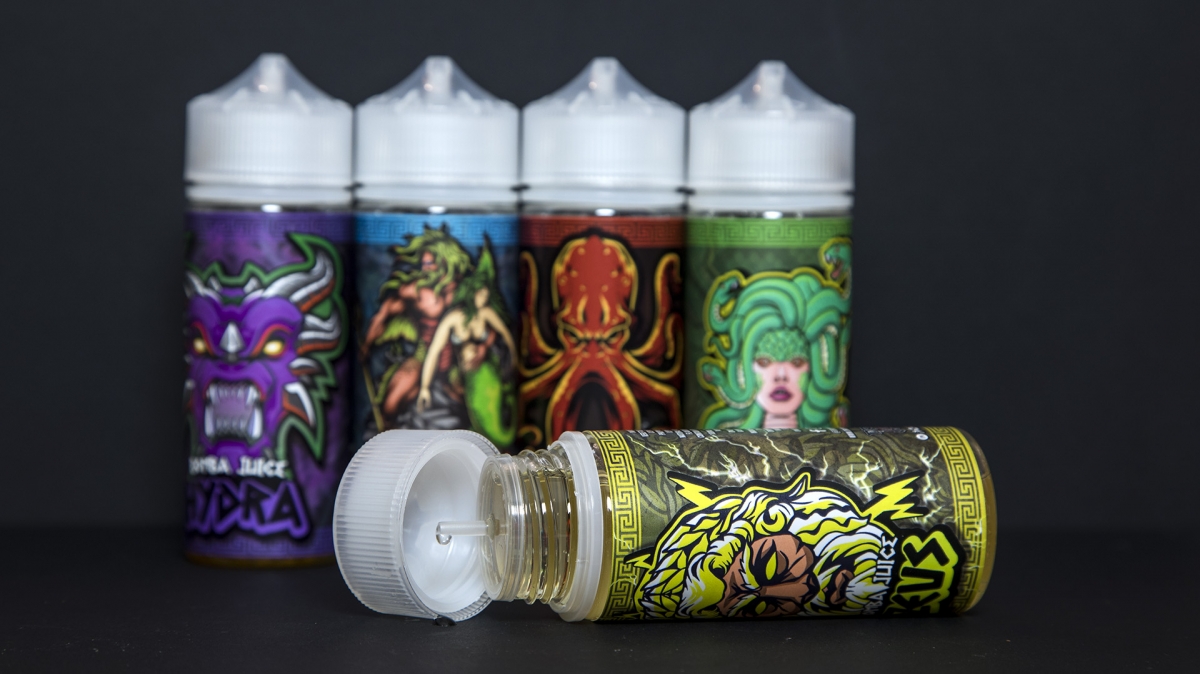 Once you’ve flipped the lid off you simply squirt your 10ml nic-shot into the shortfill, I tend to remove the nozzle and pour it in as it’s quicker. 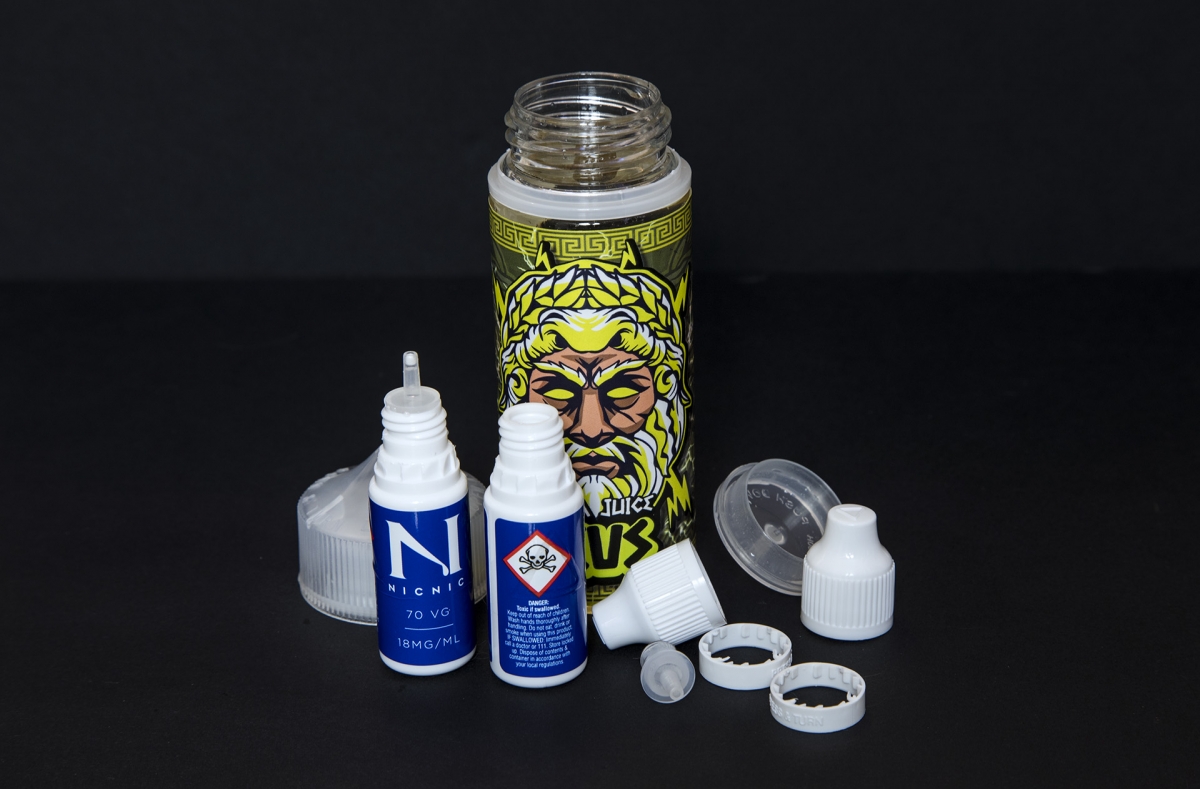 Adding one shot will give you 1.5mg and two shots will give you 3mg. There’s no more room to add any more though so 3mg is your limit, but I wouldn’t advise any more as it dilutes the overall flavour. 3mg is ample for DL vaping anyway.

*TOP TIP*
Save all your empty nic shot bottles. As the VG liquid is thick, you never really get all 10ml out so when you have a stash, you can microwave each bottle for two seconds (NO MORE) and it becomes thin enough to pour the rest out into another bottle, I gained 10ml from eight bottles this way. It’s not so much the cost, it’s less wasteful.

Also empty 10ml bottles come in handy as refill bottles instead of lugging 100ml bottles around.

So now you’ve added your nic-shots, you need to firmly fit the nozzle cap back and then screw the lid back on, the important part comes next….

SHAKE THE BEJEZUS OUT OF IT!
Seriously shake it a lot until you see millions of tiny bubbles, this makes quite a difference if you want a full flavoured even mix. Leave it to stand for 15-30 minutes (10mins if you’re desperate), and it should be good to go.

Personally I prefer to repeat the shaking process every time I do a tank refill, and store in a dark drawer or cupboard. It’s called steeping, generally juice does improve over time and you will see it darken in colour. 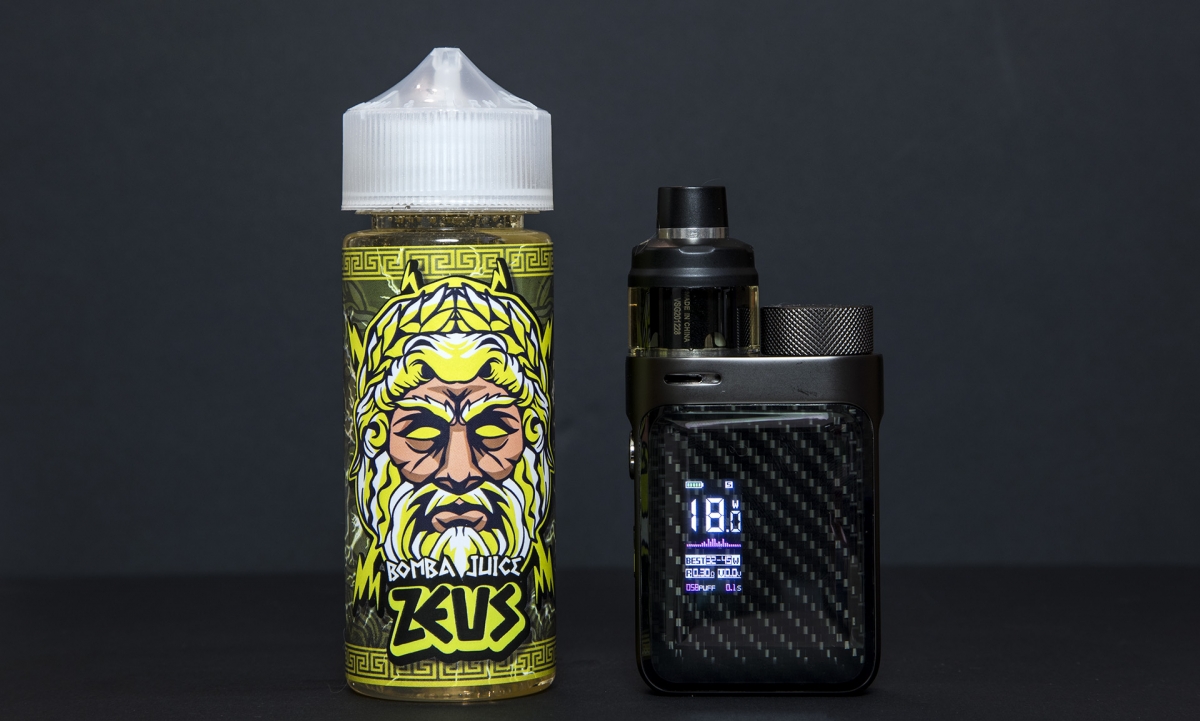 I’m going to be testing 4 out of 5 of the flavours: 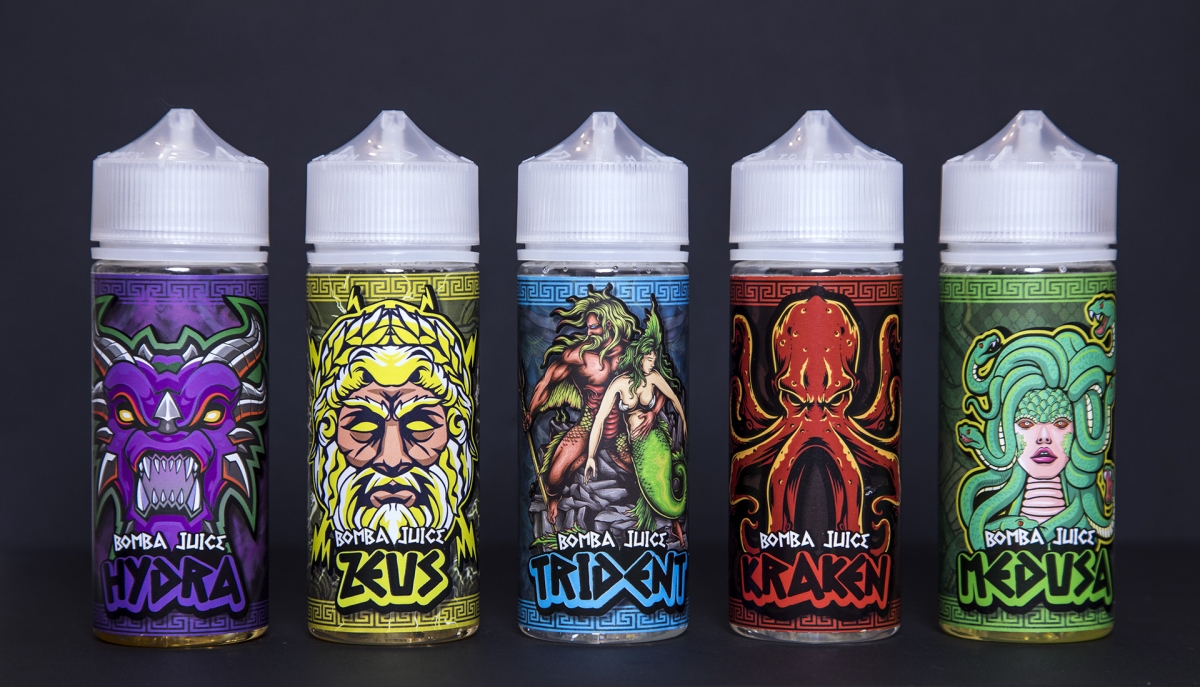 Zeus E Liquid! The king of the gods has arrived in this delicious creamy custard e liquid, blended with a sweet syrup glaze and encased in a flaky pastry shell. Grab yourself a bigger bottle of our Galatoboureko e liquid, the same recipe, same great taste!

One of my favourite flavours, creamy custard, and this one’s delicious. I found the flavour improved after a week of steeping but it was still pretty good 20 minutes after mixing. There’s a clear custard flavour on the inhale and a nice crusty aftertaste. It is probably my pick of the bunch.

Zeus is the god of the sky, lightning and the thunder in Ancient Greek religion and legends, and ruler of all the gods on Mount Olympus – basically you don’t want to f**k with him! 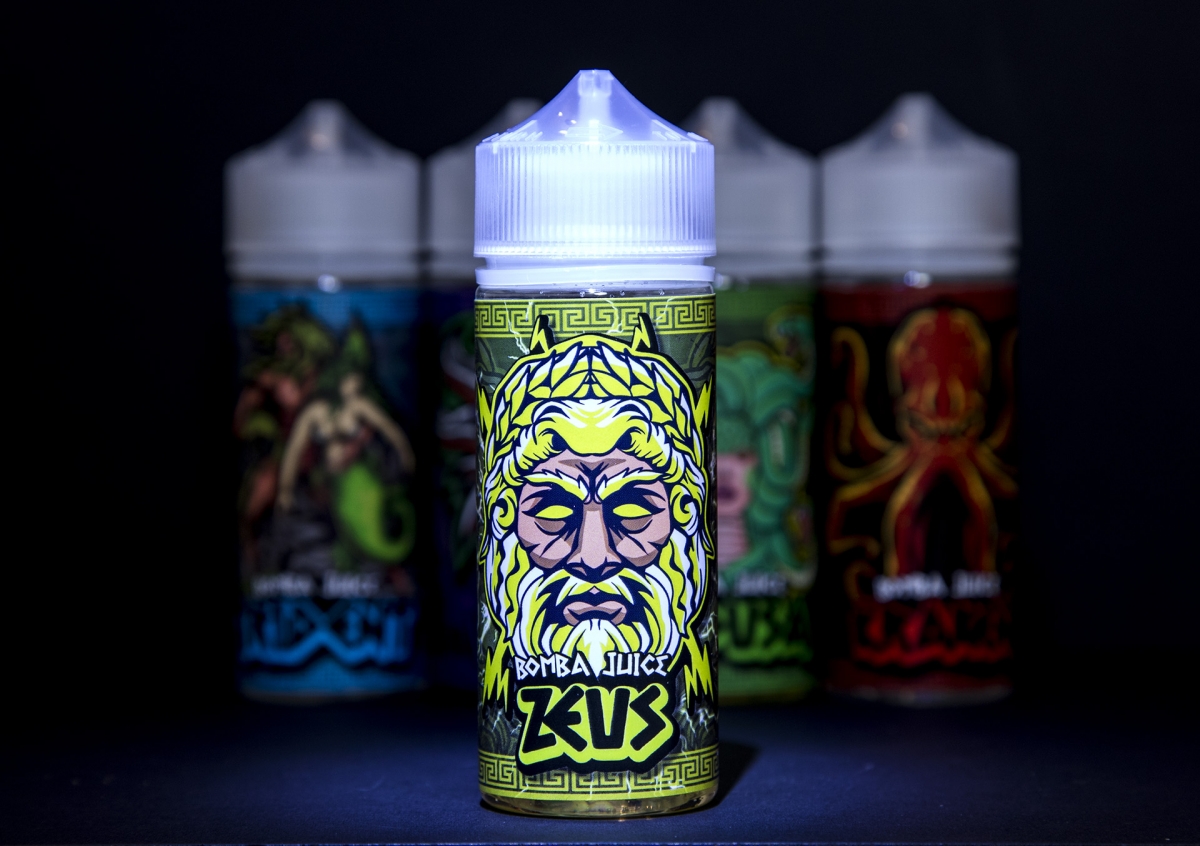 From the depths of the Adriatic Sea, Trident E Liquid the three pronged weapon of Poseidon combines sweet and juicy Pineapple, fleshy ripe Mango and succulent Berries to create a well-blended and lip smacking tropical e liquid. If you like flavoursome juice, this one should definitely be on your vape list.

A ‘trident’ test flavour, this flavour was pretty strong straight away and needs no steeping. I was having a hard time trying to describe this flavour, all I knew was that it was a lovely pineapple based blend with a fruity aftertaste, then I looked back on the official description:
“sweet and juicy Pineapple, fleshy ripe Mango and succulent Berries to create a well blended and lip smacking tropical e liquid”
They did my job for me as I couldn’t have put it better myself.

A trident is a three-pronged spear. It is used for spear fishing and historically as a polearm. The trident is the weapon of Poseidon, or Neptune, the God of the Sea in classical mythology. – Nope I can’t think of anything witty to add but I ‘tri’ed, actually I have a very good friend I call him Poseidon - he’s a swell guy. 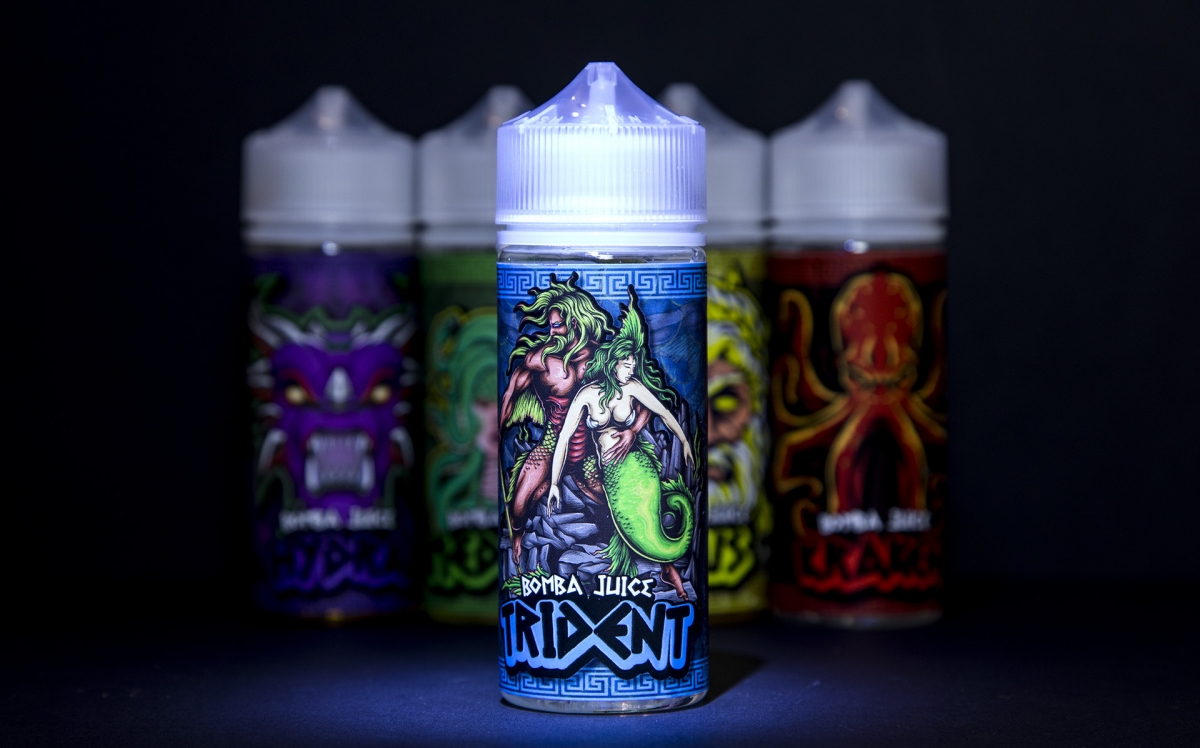 Release the Kraken! Grab yourself a bigger bottle of our Karpouzi watermelon e liquid, even-though the change in name this e liquid is still inspired from the foot-hills of Cyprus. Sweet ripe Watermelon and Prickly Pear is an all day vape and had some amazing reviews from industry experts!

Watermelon and prickly Pear? That’s a new one on me, but damn is it refreshing. I would never have put these two fruits together for some reason but it makes sense now that I have tasted the combination. The Watermelon is the more dominant flavour on the inhale and the blend of prickly pear is the aftertaste. The flavour is strong but not harsh, and this is an easy all day vape for me.

The kraken (/ˈkrɑːkən/) is a legendary sea monster of gigantic size and cephalopod-like appearance in Scandinavian folklore. According to the Norse sagas, the kraken dwells off the coasts of Norway and Greenland and terrorizes nearby sailors. These days it’s shore-leave hookers with Covid 19. 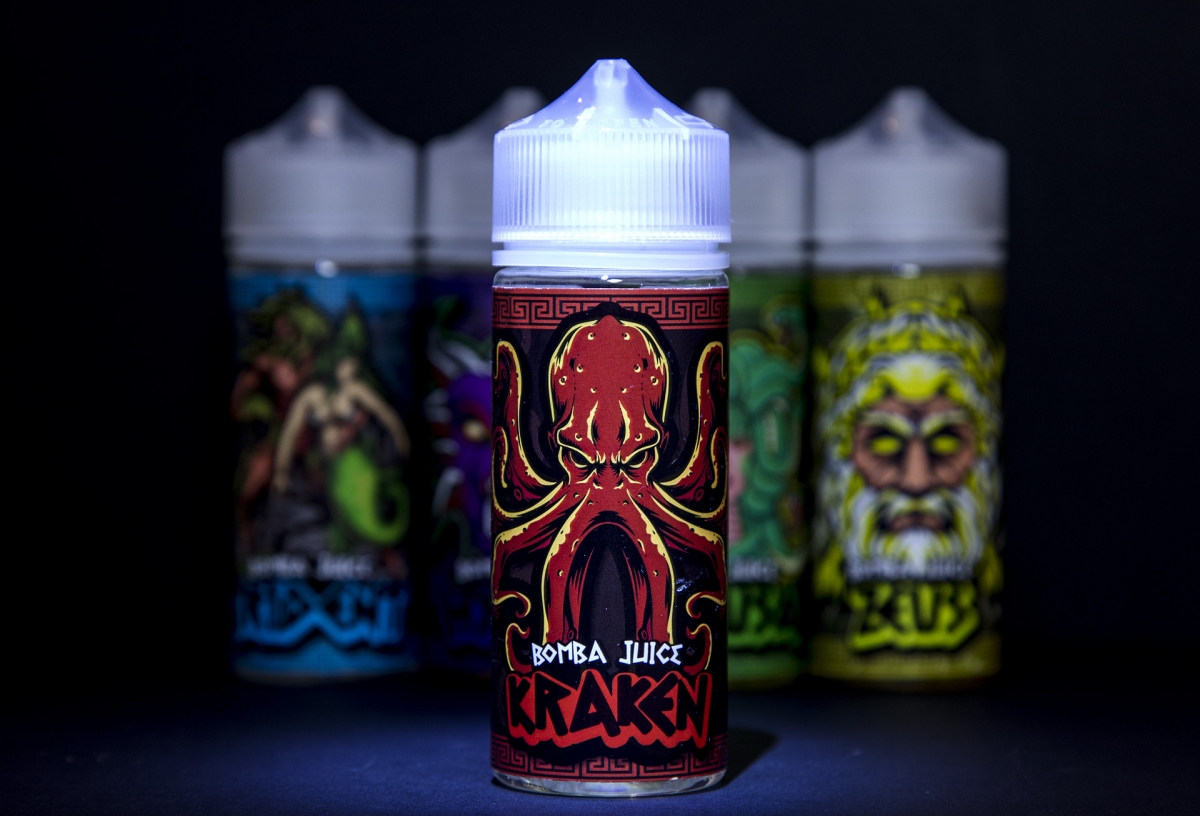 From the mythological tales of ancient Greece, Hydra is an immortal mixed berry menthol based on the famous Vimto drink! Juicy and a long lasting aftertaste with the coolness of the menthol hits all the right spots.

Vimto menthol, I really don’t like menthol but I had to give this one a try (taking one for the team). By the gods! This one took me by surprise, rather than tolerate menthol, I really enjoyed this flavour. It wasn’t overpowering compared to my previous attempts, instead it give a lush cool blackcurrant inhale, but it’s the aftertaste I enjoyed the most. It left your mouth refreshed and that Vimto taste lingered nicely. I’ve tried quite a few menthol liquids, enough to know they aren’t for me, BUT this one most definitely is, my second favourite out of the bunch and easily good enough for an all day vape.

Hydra, also called the Lernean Hydra, in Greek legend, the offspring of Typhon and Echidna (according to the early Greek poet Hesiod’s Theogony), a gigantic water-snake-like monster with nine heads (the number varies), one of which was immortal. HAIL HYDRA 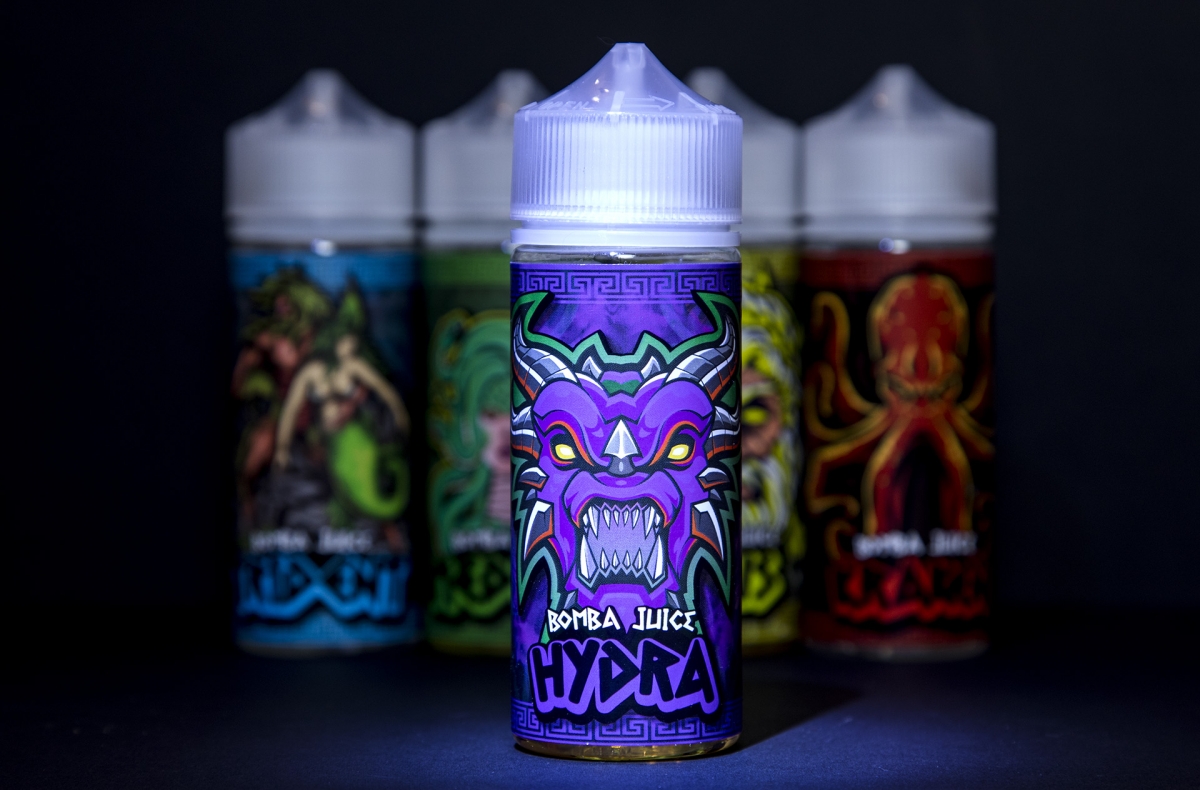 I had already heard good things about Bomba Juice so it’s no surprise that there wasn’t a poor flavour out of the four I tested. The Kraken was the most pleasant discovery for me. I’m almost through the 100ml already and it’s one I will order again, along with the Zeus (which was my over-all favourite) and probably the two flavours when I need a change. They are all good so if the flavour profile sounds right to you, then I can’t see you going wrong with any of the range.

A genuine thanks to Drippin' Junkies for what turned out to be a real treat . 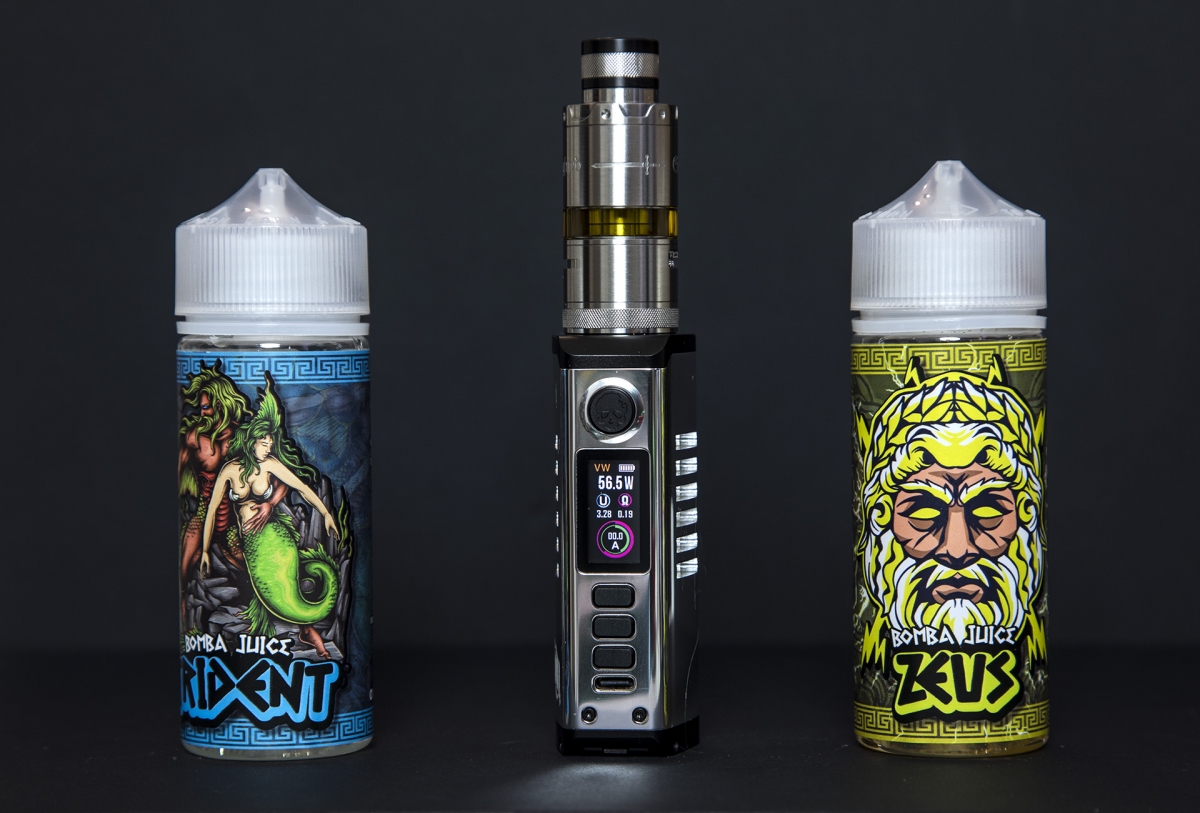