A newbies first go at drippers

Posted 2nd September 2014 by Toby Kilroy
When I first logged onto this forum, I was blown away by all the cloud chasing threads.
Videos showing happy vapers enveloped in thick White clouds, talk of ohms and rebuildables and all sorts of funny things.
All very impressive, but it's not for me. No, I had no intention of getting wrapped up in building coils etc, way too much faff.

So, today my IGO-W turned up along with a coil of wire and some cotton, courtesy of @MrMotivapor. Thanks buddy
I've watched untold instructional videos on youtube, so at this stage am merely an undiscovered expert in coil building, just need to put my "skills" into action.

Rushed in from work, I've got a few minutes to knock up a quad coil and suck down a vape before taking the dog out  how hard can it be?

First requirement of successful coil building seems to be either an epic beard, a woolly hat, or, preferably both.
Much as I want an epic beard, it seems a tall order even for an expert like me to produce one before dinner time so I'll have to hope the woolly hat is enough on its own.

Broke out the wire, whacked it over the gas ring, twiddled it round the screwdriver, job done!
Just got to stuff it in the posts on the IGO now and soon be filling the street with fog.
And there's the first problem.
The air in my house appears to be "broken."
Puzzled? yup, so am I.
The last time I was messing around with something this small and fiddly was around 20 Years ago when I used to tie tiny little fishing hooks to insanely thin line to catch the tiny fish in the local river. And I had no problem with that. Everything was sparkly clear, I could tie up these tiny fishing traces with ease. Even at the river bank, in the mud, whilst being chased by cows.
I soon discovered that tiny fish were boring, so quickly graduated to not catching larger fish and therefore had no need to call on my amazing close-quarter vision.
Fast forward 20 Years and these small, fiddly posts and screws are blurry and indistinct. Everything is small and difficult to see. The tiny holes through the posts are almost invisible?.It must be the air quality that's declined, can't think of any other reason.
Anyway, with the aid of one of those new-fangled little LED torches, you know the ones, those tiny little ones that throw out so much light that they actually recoil when you switch them on, I managed to thread the coil through the posts. That and adopting my most serious "tongue out and everything" expression, anyway.

Sadly, the coil wasn't quite as neat as I'd expected. In my minds eye I had visions of a glimmering tube of tightly wrapped perfection, something that would hold even helium in without issue.
But, the reality looked more like a post mortem of Zeberdee after a hit and run.
Still, it glowed, we're in business.
However, the resistance was a little high at 3.3 ohms. Superb. Means I can build a dual coil to halve the resistance. And, that just sounds so cool, doesn't it? dual coil...nice. Almost as nice as quad-coil
So, another quick twiddle around the screwdriver, a few more anxious "tongue out" moments (damn you, air quality) and we're in business 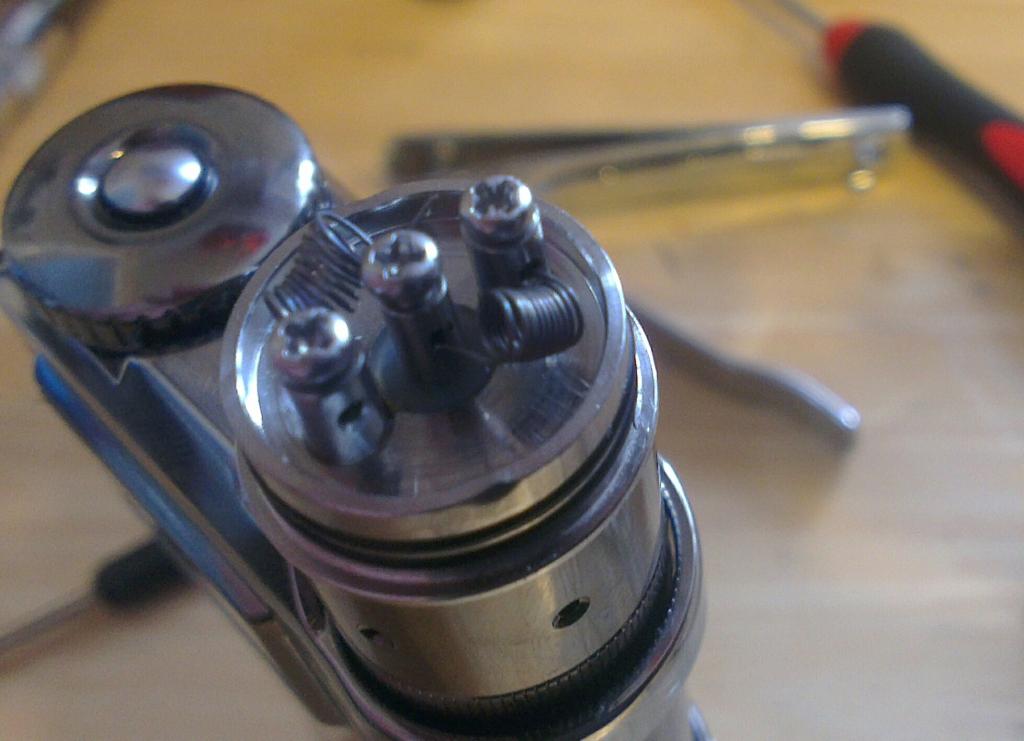 1.5 ohms showing, we're ready for a trial burn
And, it works!
But, there's a problem. Even at 15W the coils were taking a while to heat up. In fact, I could have strolled down the shop for 20 Bensons in the time they took to glow up Orange.
So, the ropiest looking coil was yanked out, and the wick build began.
First off, stuffed too much cotton through. And it was too much, but the clock was ticking, it would have to do. 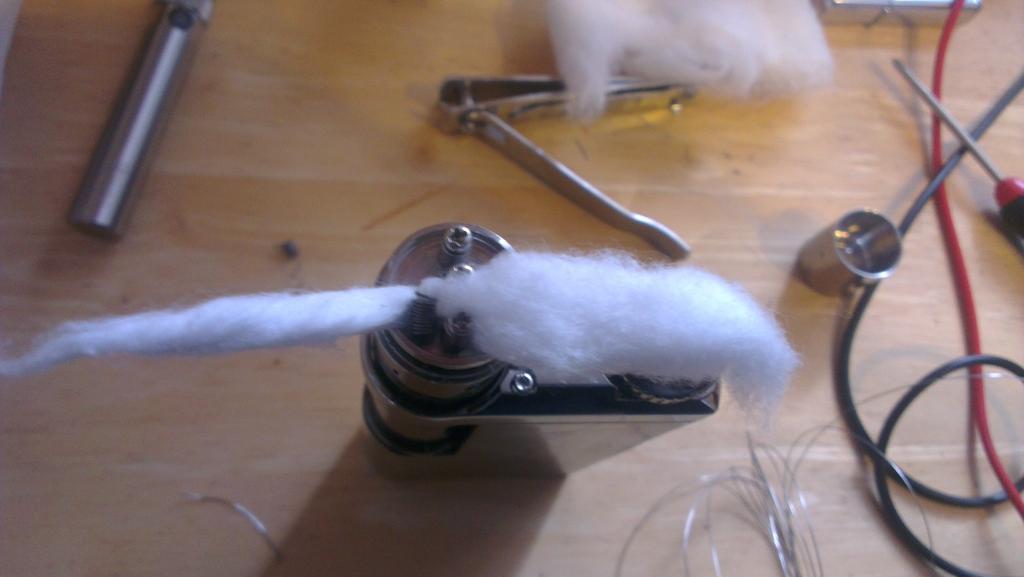 Quick up and over the coil, round the post and I've ended up with a vast blob of cotton wrapped around the coil. So much for leaving an air hole open one end, my coil was completely mummified. Still, more cotton equals more juice which equals more vapour, right?
A good squirt of juice to stick everything down and we're in business.
Now I'm slightly worried.
When this bad boy fires up, there's a good chance I'm not going to be able to find my way back to my favourite chair through the fog. Hmmmm, could be a problem.
Easy fix though, cube of cheese on my chair, summon the dog over, fire up the vape.
When the haze is too thick to see through, simply release the dog, then follow her through the fog to the cheese and my favourite chair. Easy. Sometimes my brilliance surprises even me.
So, everything in place, dogs straining at the leash, the drip tip is pushed home...
And, ignition time.
I sucked away, surprised at how smooth the vast cloud was, it barely tasted of anything! And, ready yourself dog, it's exhale time!!
A very faint, almost invisible plume of steam left my mouth, the dog got bored, wandered off, ate the cheese then fell asleep.
Hmmmmm... obviously a dodgy batch of cotton. Time to walk the dog, dinner, bath etc and a rethink.

Maybe, just maybe, I need to take a little more time over this. You know, actually pull out a chair, try and get the coils tight, use a straight length of wire, that sort of thing. Worth a try!
So, take two...
This time it was a lot more successful. Nowhere near air tight but far more like a coil than a badly made spring.
Fewer turns this time too, to up the resistance on a single. 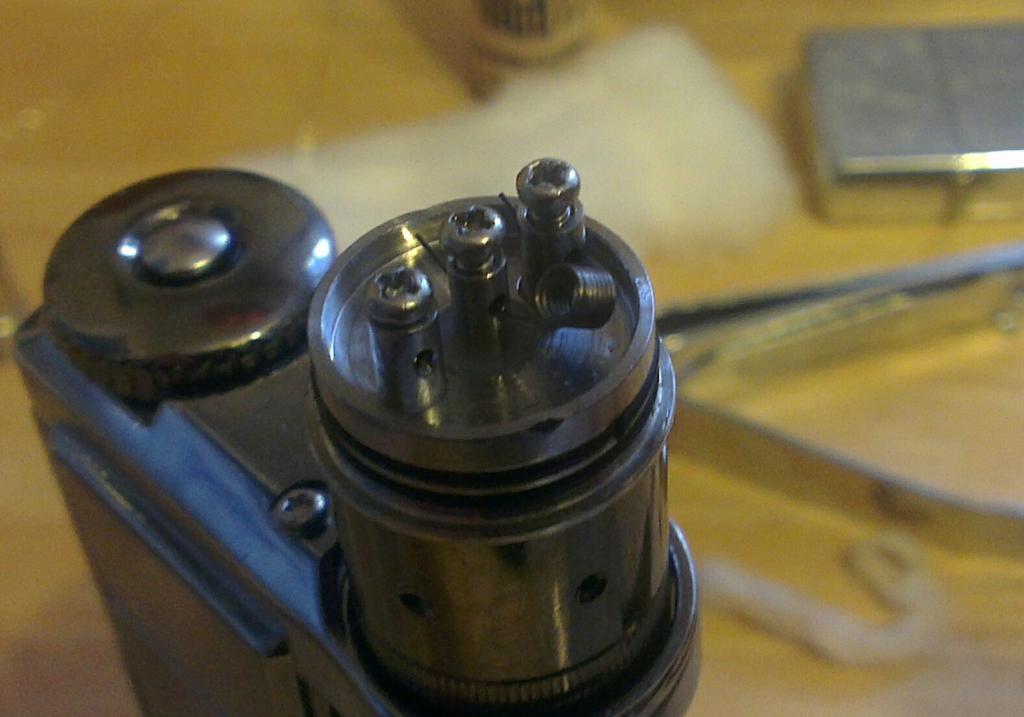 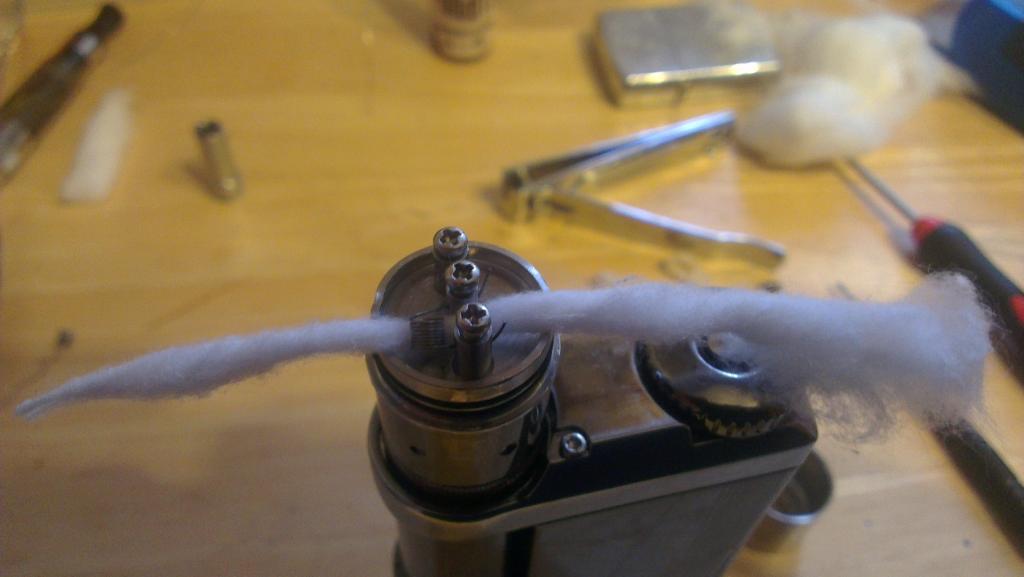 Even got an air hole this time! 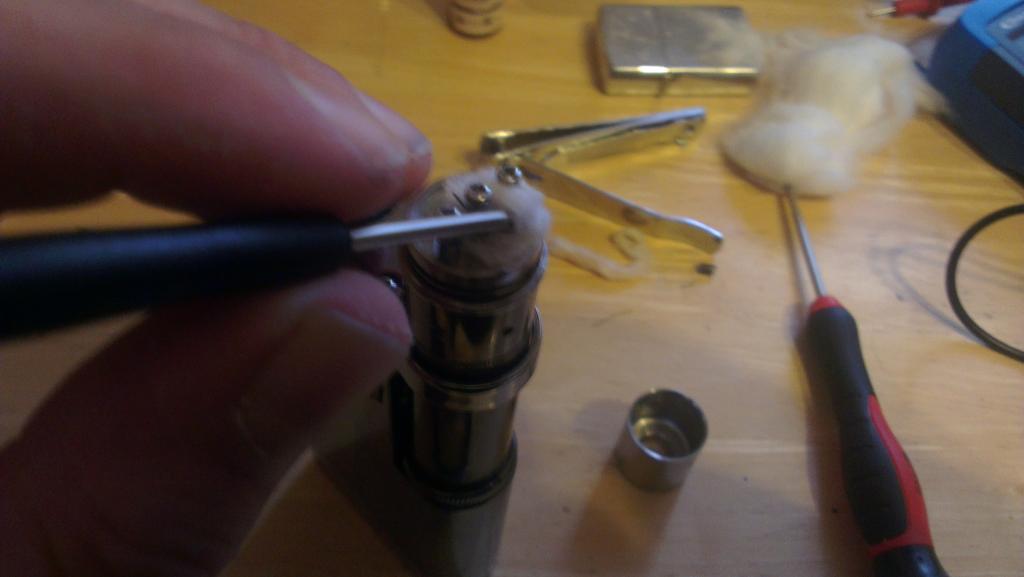 And a reasonable resistance 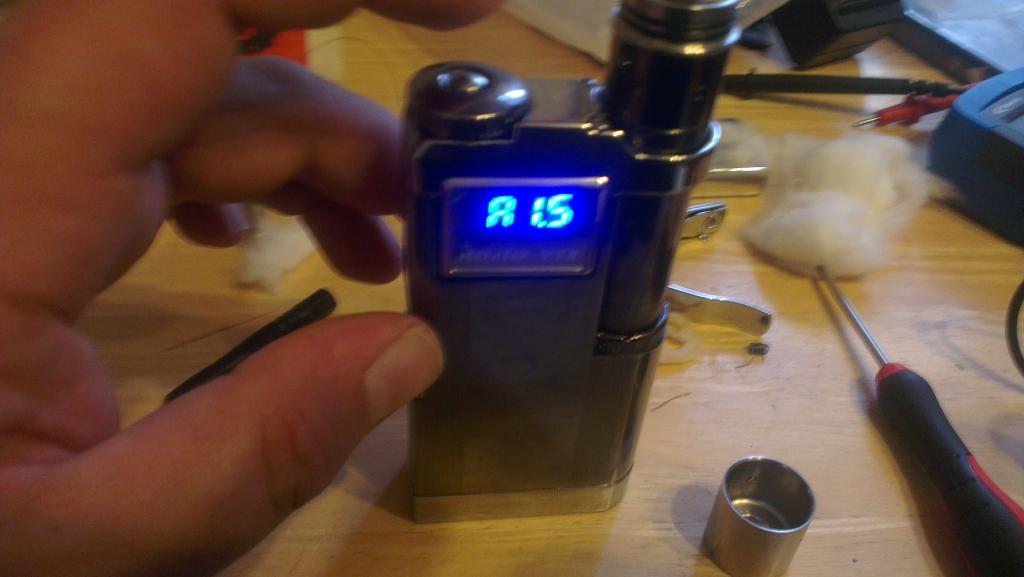 This Dragon's ready to burn!!

Quick squirt of custard and we have...vapour! 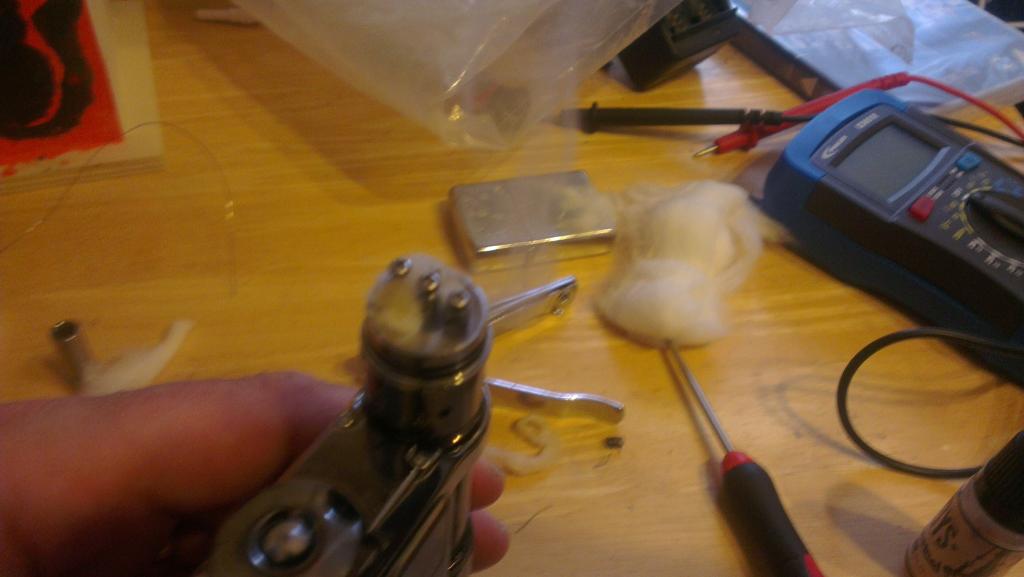 In trembling anticipation I shoved on the cap and vaped away, looking forward to the hit of a lifetime
And, it was ok.
Bit of an anti-climax if I'm honest though, probably about half the vape of the iClear, and it didn't taste great.
More of a slow worm build than a dragon really.

So, what lessons can we take away from this?
1) Big respect to the cloud chasers. It obviously takes more than just an epic beard to really get this right. It can't be rocket science, admittedly, but there's obviously a bit of skill and experience involved. Far more than can be learned from watching a few vids and a bit of wire twiddling, anyway.

2) Pain. In my 40 Years on this planet I've had my share of knocks and scrapes. I've burnt myself, maimed myself, impaled myself on various things, trodden on Lego in bare feet and broken bits of myself off. I thought I was generally fairly aware of what my pain receptors were capable of.
Not so.
It's only when you ram a piece of that wire under an unsuspecting finger nail that you learn the true meaning of that word and just how hard those little pain receptors can fire when really called upon. 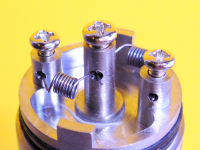 A newbies second go at drippers 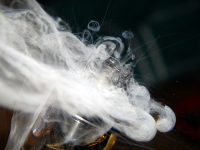