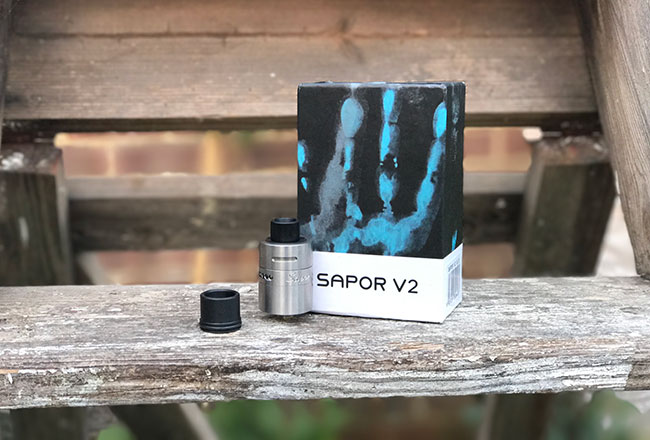 The original Wotofo Sapor was an incredibly successful RDA, a top airflow RDA that offered excellent performance at a real budget price. Alongside the Wotofo Sapor RTA, Wotofo have recently released the long awaited follow up to the Wotofo Sapor, in the form of the Wotofo Sapor V2, a redesigned RDA available in either 22mm or 25mm width.

Top airflow remains with the Wotofo Sapor V2, albeit altered slightly, and a new adjustable side airflow system has been brought in to add another layer of direct to coil airflow. The deck has been overhauled and now features a two post velocity deck to offer more options for building the Wotofo Sapor V2.

I thought the original Wotofo Sapor was a superb RDA, especially for the rock bottom price charged for it, and I even ended up owning a couple of them! Does the Sapor V2 stand up to the high performance standards laid down by it’s successor?

The Wotofo Sapor V2 comes boxed with a wide bore Delrin drip tip that has a 15mm bore and three packs of Wotofo competition coils. That's it, you'll have to supply your own Allen key for the grub screws! Including some spare post screws and o-rings would have been helpful, the lack of spares is a bit of a negative here. 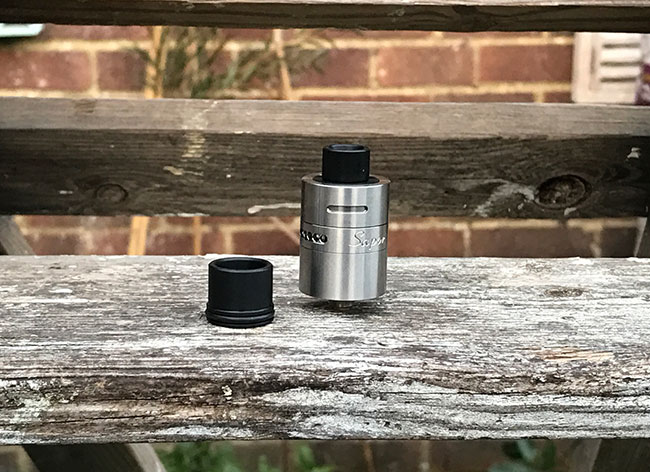 Constructed of 304 Grade Stainless Steel, and available in either 22mm or 25mm with stainless steel or black finishes available, the Wotofo Sapor V2 features a completely different appearance aesthetically to the original Sapor. Sapor is still present on the top cap of the RDA, using the same font, but that is just about the only common trait the two have!

At the top of the Sapor V2 you have a delrin wide bore drip tip, that has a width of 15mm, and stays cool thanks to the delrin composition. The top cap comes off easily allowing you to drip juice down onto your build with ease, you can also drip juice down through the wide bore drip tip easily. The base of the Sapor V2 features an adjustable 510 connector, that has a Rhodium plated copper contact for increased conductivity.

I do have to say that I’m definitely a fan of the Sapor V2’s new appearance, even if it is a little on the tall side. It appears much smoother and cleaner, and even though it is taller than the previous Sapor there is a more unified look about it. It’s suited the mods that I have used it on really well, such as the Vapedroid C1D2 and the SBody Elfin DNA75, and not looked out of place on either. 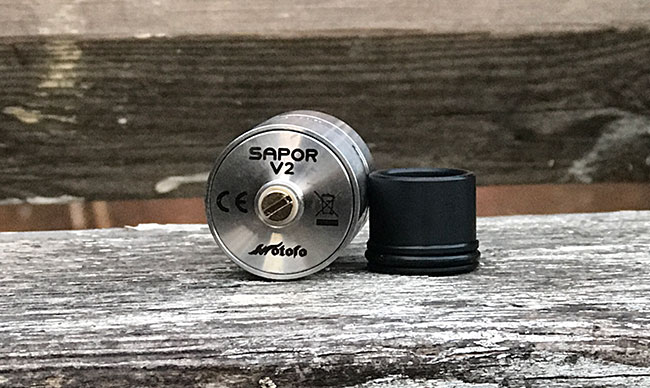 A well designed adjustable top airflow system was present on the original Wotofo Sapor and this same system has been ported over to the Wotofo Sapor V2. This time around adjustable side airflow is also present, allowing for direct to coil airflow, and this can be adjusted independently from the top airflow, giving you a lot of different airflow options. If you want to close the side airflow off totally and leave the top open you can, and vice versa.

The top and side airflow configuration coupled with a deep juice well means that leaking is drastically cut down, I had very little leaking occur when using the Sapor V2 even after being overzealous with my dripping! 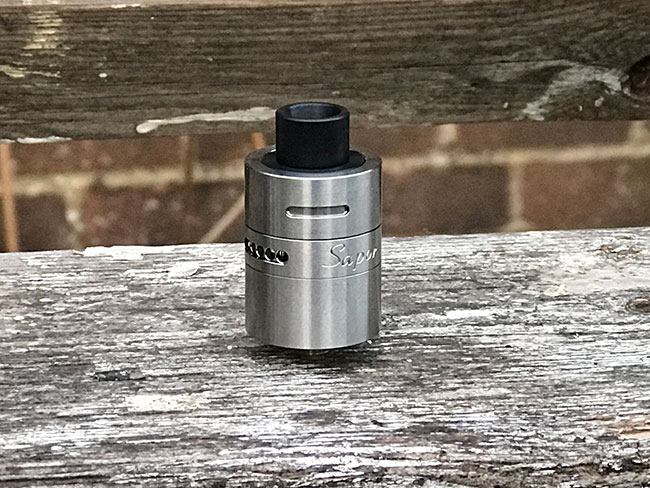 The Wotofo Sapor V2 has a two post Velocity styled build deck, there’s a fair amount of space here to play with and the post holes are of a good size too, making it pretty easy to build on. You also have a nice and deep juice well present on the deck which is capable of retaining plenty of juice. There’s enough room to fit big and thick coils in without any issues. The Wotofo Sapor V2 can be built and used single coil, but you can't close off one side of the airflow, making it a little too airy for a single coil build. 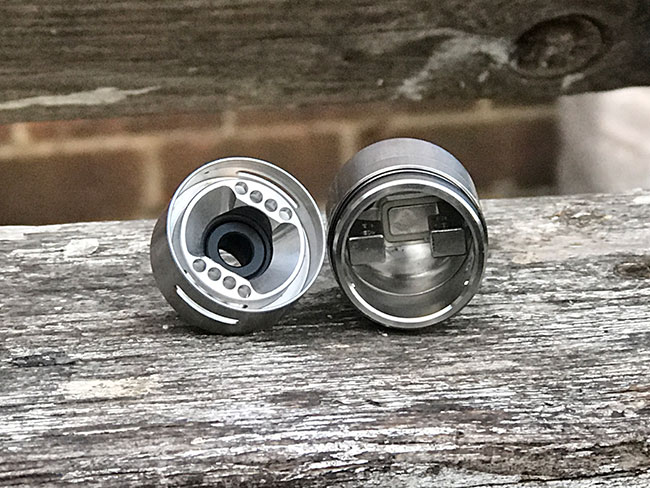 Even though there is a lot of airflow present, especially with the side and top airflow slots wide open, the Wotofo Sapor V2 doesn’t offer a massive amount in the vapour department. It can blow a pretty respectable cloud, but dedicated cloud chasers may want to look at other options as the Sapor V2 is mainly a flavour focused RDA. It does get pretty hot as well when using low resistance builds at high power, even with all four airflow slots wide open.

And when it comes to flavour, it does it very well indeed! The original Wotofo Sapor was known for providing great flavour, and the Sapor V2 steps it up a notch. The Sapor V2 offers a really flavoursome vape, I was expecting it to be good given my experiences with the original Sapor, but the Sapor V2 really does provide you with a superb vape. Having the extra airflow options also allows you to really fine tune the experience too.

For an RDA priced under the £20 mark with many retailers, the Wotofo Sapor V2 offers eye opening value for money, especially when you consider how well constructed it is and how well it performs. The flavour produced by the Wotofo Sapor V2 stands up to RDA’s that I have tried that cost three to four times what the Sapor V2 costs, and the build quality isn’t far off either! Like it’s predecessor, it’s a truly impressive bit of kit.

Personally I’d love to see a bottom feed pin become available for the Wotofo Sapor V2 to enable it to be used with a squonker, however that is the only improvement I can suggest for what is a very good RDA!