Royal Hunter RDA by Council of Vapor Review by VapeMaster

The Royal Hunter is the newest RDA (Rebuildable Dripping Atomizer) from Council of Vapor. This stylish dripper is mainly intended for flavour chasers but it is quite capable of creating a great deal of vapour.

I have to say I really do love the presentation of this RDA. Everything about the style of the packaging and the extremely well done manual really does write home about this being a quality and stylish product. Usually I don't tend to mention this kind of thing but when it is done well like it is with this product I think it deserves attention. There is also a small card included which offers the chance to win items for liking Council of Vapor's Facebook page. 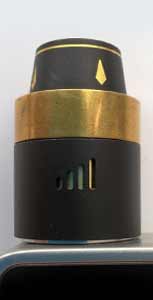 I have to admit I loved the styling from the moment I first saw it and I knew I really wanted to review it the first chance I got. It has a real elegance in terms of looks but for some it may even border on vulgar opulence considering it's sheer extravagance. Of course all this is very subjective but personally I think it looks absolutely awesome and yes it does look very fetching on my Sigelei 100W+.

The drip tip is suitably wide bore and it shares similarities with the one from the Mutation X V4 in that it tapers at the top. The result is that it feels more comfortable when vaping.

The airflow slots are actually vertical rather than the typical horizontal or Cyclops style. In fact they look very much like the bars you might get on some multimedia volume display which is certainly unique.

Removing the top cap you can see the prongs that control the airflow are very similar to those in RDA's such as the Cigreen X V2 and the Mutation X V4 but they are completely straight in the Royal Hunter and not angled at forty five degrees like blades.

Inside the top cap you can clearly see there a honeycomb style mesh and it looks very much like a insect's compound eye. This is the Royal Hunter's juice spit back protection and in operation it works really well. I know some people have complained because it is not really that practical to drip through but is it really that much effort to remove the top cap? Personally it doesn't bother me in the slightest and I would much rather have to remove the cap to refill then end up with e-liquid in my mouth when I vape.

The RDA has double O-rings at the base which hold the top cap securely and while the cap is easily removed it is not loose at all. The juice well is kind of deceptive in that it looks quite shallow but in actual fact I have found it holds a fair bit of juice. It certainly is not as deep as the wells in the Twisted Messes or 13 Heavens, 9 Hells but it is more than acceptable.

The post holes are quite large and should allow for a good variety of builds. For those that love more exotic builds there is a good amount of room in there and you should have enough clearance with the top cap fitted.

Now we come to the one issue with the Royal Hunter that everyone on the internet seems to complain about and that is the screws. Let me just state here that unlike others I don't personally have a major issue with them but I agree the screw heads are extremely small. They would certainly be difficult to see if your eyes aren't so good or you are working in poor light. As for the screws themselves I would only have a major problem with them if they were sharp, badly threaded or tended to cut wire and that is not the case with the ones in the item I received for review. The infamous blue screwdriver actually does a great job of tightening the screws which certainly seems a first for me. While I could nitpick about the size of the screw heads along with everyone else who has ever commented on them I won't because the overall machining of this RDA really is excellent. 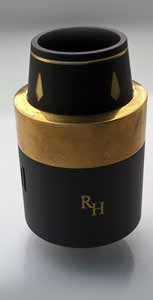 I found this RDA incredibly easy to build. Despite the small screw size I don't think this RDA presents any real problems that would challenge a newcomer to drippers. A single coil build should be easily achievable. Airflow adjustment is simple and there is plenty of build room in there. I think this is definitely one of the more user friendly RDA's you could purchase but it just depends on whether you are bothered by the screws.

The first build I put in the Royal Hunter was a single coil using 26 AWG (0.4mm) Kanthal which had a final resistance of 1.0 Ohm. I wicked the coil with Japanese cotton and for my juice of choice I used El Toro Eden purchased from House of Liquid. My first vape was at 30 Watts and I have to say it was excellent.

With one of the airflow slots fully opened up the draw for me was completely spot on. There is a great deal of air but despite that the flavour is extremely good. While the flavour is impressive it is not quite on par with a RDA that has a reduced chamber, however the Royal Hunter still makes for a very worthy choice.

I totally loved the taste of Eden in this RDA, with the excellent tobacco flavour notes blended with a delicious hint of sweet and crispy apple. Vapour production was very good and while it will never put out the kind of vapour you'd get with some of the truly dedicated cloud chasing RDA's it can still be quite the room fogger.

At no point did I ever end up with juice in my mouth. My Derringer is notorious for heavy spit back but the Royal Hunter does not have that issue due to the mesh spit back guard. I wouldn't say this RDA leaks heavily at all but there is a certain amount of juice that tends to build up near the airflow slots, it's nothing major just a few droplets. Of course the Royal Hunter will leak on you if you overfill or fill it and then stick it in your pocket but for typical use it doesn't.

For my second build I went for a dual coil using twisted 26 AWG (0.4mm) Kanthal. My final resistance was 0.6 Ohm and once again I wicked with Japanese cotton. This time I used El Toro Puros and once again flavour was excellent but this time with far more vapour being produced.

Personally I don't really see the need for running this RDA with a dual coil since a single is easily good enough and will be more than acceptable for most typical users.

Along with the Twisted Messes, the 13 Heavens 9 Hells and the Freakshow Mini, the Royal Hunter is one of my favourite RDA's that I have had the opportunity to try this year. What I love the most about this RDA is it's distinct sense of style and the quality of vape it offers. For a authentic product that offers both great flavour and very good cloud production with no real faults the asking price of £29.99 is a bargain in my opinion.

The Royal Hunter is a solid RDA purchase that shouldn't disappoint.