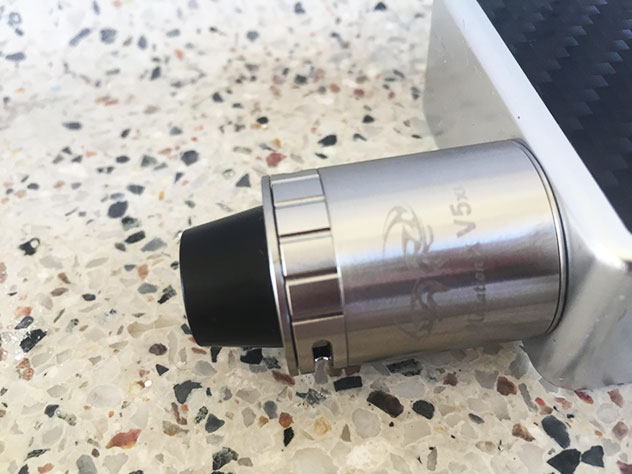 Extremely well known and highly regarded within cloud chasing circles, the Indulgence Mutation X series is renowned for its generous airflow options resulting in the ability to produce massive plumes of vapour clouds, the Mutation X variations have been the RDA of choice for many a cloudchaser, and ove rthe years have consistently provided some of the best results for cloud chasers.

Now, having been a huge fan myself of the Mutation X series, and owning pretty much all of them since the V1, to say I was excited about getting my hands on the V5 XL would be a slight understatement, especially as I was a little let down by the leaky Mutation X V4. This time around, it looks like Unicig are not just going all out to dominate the cloud chasing scene with the Mutation X V5 XL, but also to capture a large market share of those who prefer to chase the best flavour rather than the biggest clouds.

I did temper my excitement enough however to get my thoughts on it written down, I was really interested to see if Indulgence had just tweaked a few things here or there (as per previous itinerations) or really gone all out to redesign it...

The Mutation X V5 XL comes packaged in a smart white Indulgence branded presentation box, inside the box itself is:

The Mutation X V5 XL is a big old beast of an RDA, manufactured from solid 304 Stainless Steel with a wide bore Delrin drip tip, and measuring in at 24mm in width and 44mm in height, with a weight of 42.6g. The trademark Mutation X logo, instantly recognizable by many long term cloud chasers, is laser etched on the side of the top cap with ‘V5 XL’ next to it. At the base of the Mutation X V5 XL the Indulgence logo, serial number, and ‘Designed in USA’ are laser etched on either side of the adjustable 510 connector pin. It's the biggest Mutation X RDA to date, but it's sleek design and 24mm width sits perfectly on my Efusion DNA200. 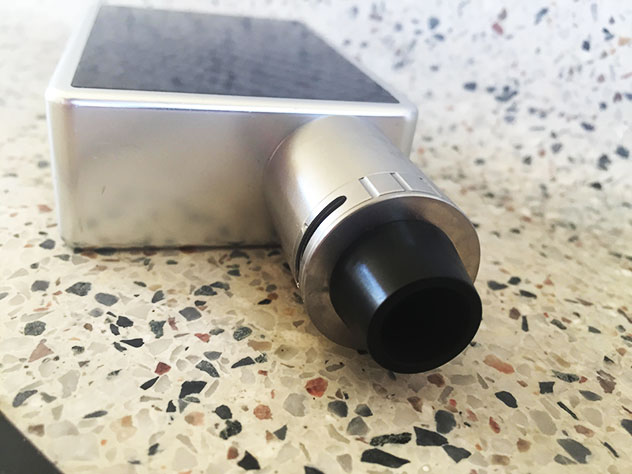 One of the unique features of the Mutation X V5 XL is that it features a unique double layered thermal shield design to help heat dissipation, and in practice this works very well. It also forms part of the Mutation X V5 XL’s unique top and bottom airflow system. Essentially there is an inner as well as an outer top cap with space internally between the two. The inner top cap absorbs the majority of the heat during use, and helps to prevent the outer top cap from becoming too hot. There are also two large cut outs either side of the internal top cap, and positioning these either side of your coils will greatly benefit both flavour and clouds. The o-rings at the base of the Mutation X V5 XL hold both top caps on firmly, however not too tightly as to make it difficult to remove the top cap.

At the top of the Mutation X V5 XL is a large wide bore Delrin drip tip that tapers into a conical shape, which concentrates flavour down onto your tastebuds. The drip tip itself can be removed, revealing plenty of space to drip down onto your build, however as it is a non standard fitting you will need to bear this in mind when choosing a different drip tip. There is no 510 drip tip adaptor included so you will need to source your own.

The Mutation X V5 XL sports a massive two post build deck, with two large slots on either side of each post, allowing for massive coils to be fitted. You can dual or even quad coil this bad boy, and the deep juice well retains loads of juice too. Also present on the build deck are two airflow slots in the centre, as airflow is drawn up from the base of the deck and out onto your coils internally. 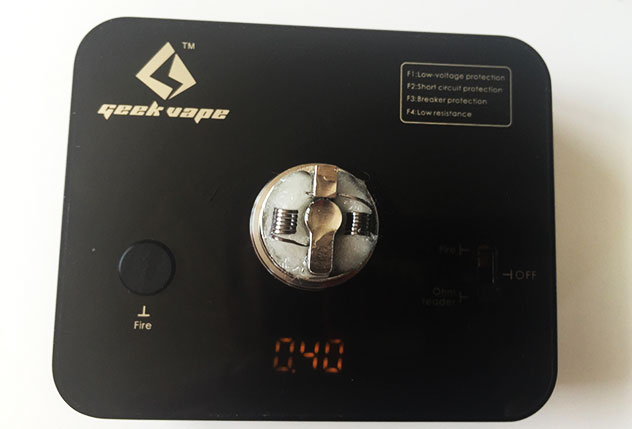 I personally opted for a dual 25 AWG flat kanthal build, with a 3mm internal diameter, that came out at 0.4ohm exactly. Fitting the coil legs into the post holes was a breeze, and the grub screws trapped the coil legs down perfectly. A previous problem with Mutation X series RDAs was the difficulty in getting the post screws to trap down the coil legs securely, thankfully I had no issues with that here, and I felt the Mutation X V5 XL was very easy to build on overall. 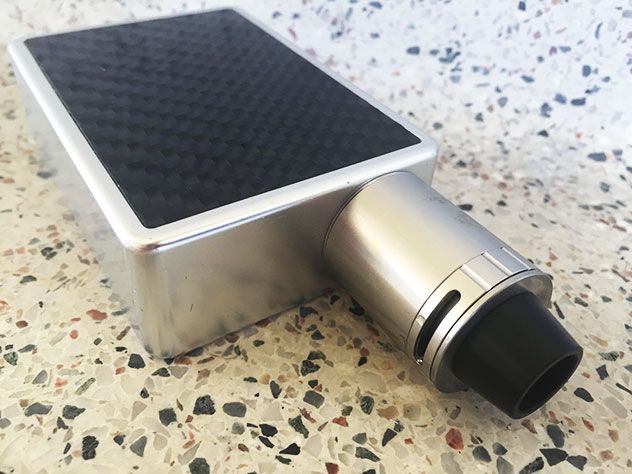 Of course, there's still a massive amount of airflow available, this wouldn't be a Mutation X RDA without huge airflow! Primarily airflow is controlled from the top, with two massive cyclops airflow slots that can be finely adjusted from wide open to closed down. There is a serious amount of airflow available here, wide open this offers an incredibly airy draw and phenomenal clouds of vapour! There isn't an option to close off a single airflow slot, however the move to top airflow vastly cuts down on opportunities for the Mutation X V5 XL to leak. The bottom airflow is covered up by the external top cap, which means juice can't leak out of the base unless you remove the outer top cap and over drip onto your build!

As you would expect from a Mutation X RDA this thing seriously delivers when it comes to clouds. There are bagfuls of airflow on offer, and this is extremely adept at kicking out giant, competition level clouds of vapour. Even throttling the airflow down a little still provides thick and dense fog, any concerns I had about the Mutation X V5 XL’s ability to deliver on the cloud front were quickly allayed within the first couple of draws on this!

I was actually shocked at just how good the flavour was from this RDA. In the past, Mutation X RDAs have been great at kicking out the clouds, but not so great when it came to delivering flavour. I wasn't expecting much when it came to flavour but I came away seriously impressed by this, I found the flavour with my flat kanthal build to be pretty exceptional and in my opinion it's the best Mutation X RDA for flavour yet. Vaping juices such as Coffee Dunked Donut, Vapetasia Lemonade and the new juices from Fallstreak left me really satisfied, I was able to identify the individual flavour notes in each juice with ease, and the flavour was delivered smoothly to my palate as well. For the first time with a Mutation X RDA I can safely say that the V5 XL is a real competitor when it comes to flavour delivery. 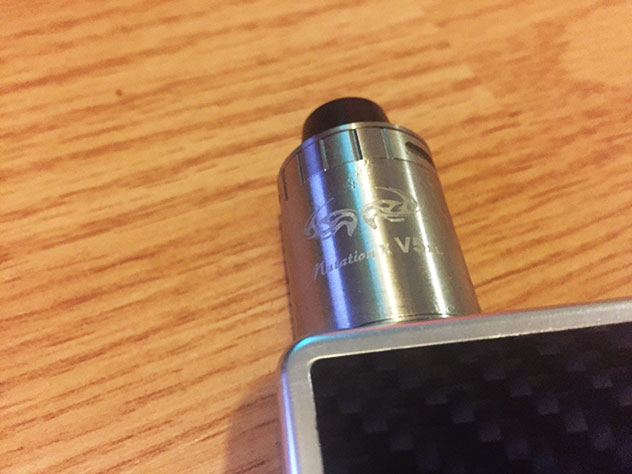 Another couple of points to note were that the Mutation X V5 XL never seemed to get too hot during usage, even when chain vaping at 80+ watts. Thanks to the double thermal shield design, the Mutation X V5 XL stayed pretty cool during use. I also didn't really get any leaks at all of note, thanks to the move to top airflow, although I did get some very minor spitback occasionally, usually only when I had saturated my build in juice!

After the leaky and slightly disappointing Mutation X V4, the Mutation X V5 XL is a triumphant return to form for Indulgence. Leaks are now pretty much a thing of the past, and what we have here now is a solid RDA that provides superb performance in both the vapour and flavour departments. The build deck is a joy to work with and offers a massive amount of build possibilities with its huge two post deck, and with the space available this is also appealing to those new to rebuilding.

As a long time Mutation X fan, I've been delighted with how the Mutation X V5 XL offers not only large clouds, but real tasty vapour as well. Build quality is solid for the price, and the double thermal shield design is ingenious, keeping the Mutation X V5 XL cool during use no matter how many watts you are firing though it. The dual airflow system is excellent, allowing for a real airy draw, but one that is flavoursome as well. This has made for an ideal RDA for me, one whereby I can get the best of both worlds when it comes to vapour and flavour!

Two thumbs up for the Mutation X V5 XL from me. It's an RDA with big airflow, but big flavour to boot as well! 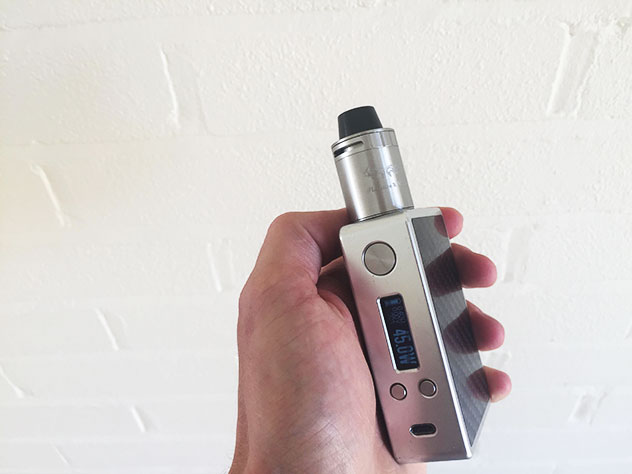