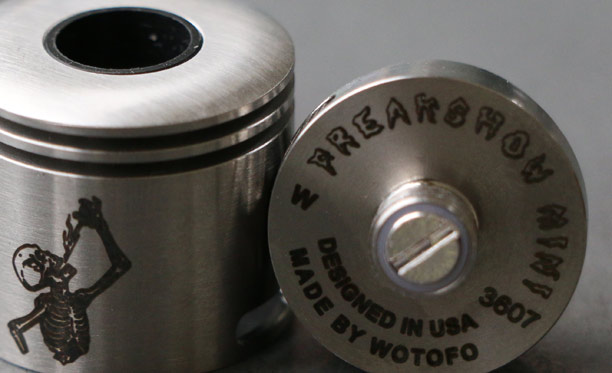 Recently there has been a noticeable increase in the amount of quality, affordable, genuine Rebuildable Dripping Atomizers (RDA’s) coming to market in response to the low cost clones that previously dominated the RDA market. Whereas as recently as early 2014 you would have been shelling out upwards of £50 for a genuine RDA, which many vapers sniffed at hence the rise of the clone, there are now a huge range of low cost but excellent quality genuine RDA’s available. With the rise in sub ohm tanks, high power box mods and affordable rebuildables cloud chasers on a budget these days are spoilt for choice! The latest offering from Wotofo is the Freakshow Mini, a shortened version of the top selling Freakshow RDA from 2014.

The Freakshow Mini comes well packaged in a metallic circular presentation box with the RDA itself encased in foam, there is an authenticity code printed on a sticker found on the side of the box so you may check your unit is genuine.

Note: No drip tip is not included as standard, so you will have to source your own. All standard size drip tips I tried out on the Freakshow Mini fitted absolutely fine. 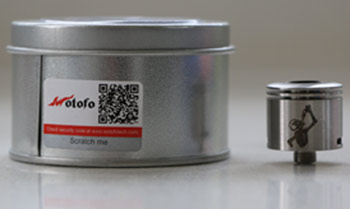 The Freakshow Mini does bear some similarities to its bigger brother. The height has been vastly reduced from 31.5mm to 17mm, however the width remains the same at 22mm. The Freakshow logo is present on the side, however this time around the ‘Freakshow’ wording has been removed. On the underside of the unit you will find your serial number.

I had a slight issue with the original O-Rings- I struggled to get the top cap off when I first received it, but I swapped the O-Rings for the replacement ones in the box and this solved the issue. This may have just been a small issue with my unit.

22mm width ensures that this fits on most popular mods with no overhang, the reduced height makes the Freakshow Mini a perfect addition to any small size mod! 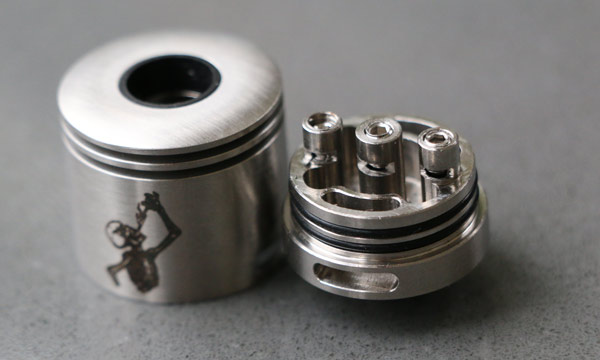 Now this is where vapers are either going to love or hate the Freakshow Mini. At first, when I took the dripper out of the packaging I was slightly put off by the small size of the deck (this is the first ‘mini’ RDA I have got my hands on), being used to using kanthal at 0.5mm and above with coil internal diameters of 3mm (I tend to vape in the region of 80-120W with regulated box mods when using RDA’s and therefore need big coils to handle the power going through them) there was no way my usual large coils were going to fit here. You will need to have patience with the small deck but believe me your persistence will pay off with an extremely rewarding vape. You do have more room that you would expect though –just watch the positioning of your coils against the under coil airflow slots so that you do not short your build out against them! Luckily I had some 0.37mm Kanthal in my toolbox, and I put together an 8 wrap dual coil build with a 2.5mm coil diameter and muji cotton wick. Centered the coils (some users will find this a bit fiddly), positioned them directly over the airflow slots in the bottom of the deck to maximise flavour, checked again that there were no shorts present and the coil legs were tightened down correctly, dripped some juice (South Coast Vapers excellent CYMore in case you were wondering!), set the airflow to wide open (just how I love it) hit 30 watts on my IPV Mini 2 and away we go…

The flavour is absolutely incredible. You pick up the subtle nuances in each juice, and it becomes a full frontal assault on your tastebuds. The under coil airflow and reduced chamber size are all to thank for this; I have not tried anything better for flavour. Cloud production is surprisingly slightly better the original Freakshow RDA as well, but that is not what we are looking for here, this RDA is all about the flavour! I reached for a higher VG juice (Mr Good Vape’s Moon Sugar in 80VG) and again, the flavour was just fantastic, hugely pronounced, this is a complex juice and I was able to pick out each individual flavour when using the Freakshow Mini. Upping the wattage and closing off some of the airflow just made the flavour even more intense. 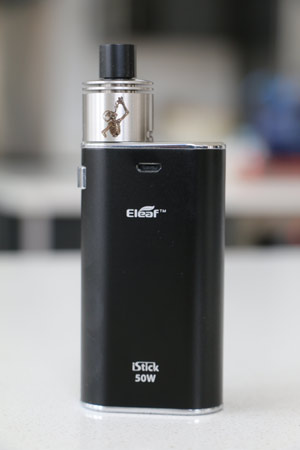 I also tried 8 wraps of 0.42mm Kanthal with a 2.5mm coil diameter for 0.35ohms, this just about fit within the deck but the Freakshow Mini, but caused the Freakshow Mini to get very warm very quickly, and the flavour became a bit muted due to the build deck becoming pretty much filled with my coil and wick! I did attempt a build using 0.5mm Kanthal, just to see if it could get it to fit, but the resulting coils were far too large and the ohms far too low. I found the flavour much better using the smaller 0.37mm Kanthal than 0.42mm Kanthal.

There is plenty of wicking room here, the wick channels have been redesigned over the original Freakshow allowing you to pack more wick in should you like to build your RDA’s in that fashion- personally I prefer less wick tailing down into the juice well.

Posts are quite small and short and contain slotted post holes- initially I was quite disappointed with this but after having a good play around with different builds and wire gauges I have been converted, there is a bit more room to play around with than you initially think, and this actually cuts down on the post screws themselves from becoming loose and causing a short with your build. I am not normally a fan of hex screws but they are well machined and slot in perfectly. The negative posts are now milled to the deck to maximise conductivity.

The most surprising feature of the build deck in the Freakshow Mini is the 5mm deep juice well. The small deck belies the huge size of the juice well, this is surprisingly large and was unexpected! This is on par with some of the deepest RDA’s out there and allows you to draw from a huge reservoir of juice, reducing the amount of time you need to drip juice onto your build! This again is another improvement over the original Freakshow and there seems to be less of an issue with juice leaking out of the airflow which was a concern raised by many on the original.

There are three oversized airflow slots on the outside of the Freakshow Mini, and two massive inner airflow slots (measuring 9mm x 3mm) providing under coil airflow to maximise flavour quality. The airflow control rotates easily, and allows you to close off one of the airflow slots should you wish to only use a single coil build. On the airiest setting, with all of the airflow slots wide open, the immense flavour is still there. The draw is not up to the level of much airier RDA’s such as the Mutation X for example on the most wide open setting, it is slightly tighter, but I still felt comfortable with it and I love a nice airy draw! The flavour definitely more than compensates for this.

Having the inner airflow slots positioned under the coils can provide a slight issue however, as I found out, there can be juice leaks from the airflow slots so it is advisable that you carry this around with the airflow either closed off completely or with no juice present in the juice well should you wish to avoid any leaks. 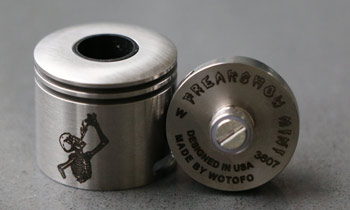 The original Freakshow RDA was one of my favourite RDA’s from 2014 (in fact, one of my favourite RDA’s ever), but Wotofo have only gone and improved on the original by reducing the chamber. If you are deciding between the original Freakshow and the Freakshow Mini then I would go for the smaller one, you will not be disappointed. I had actually thought when I picked one up that it was a little on the tall side and would have benefited from a slightly smaller chamber! The flavour on this RDA is truly phenomenal and in my opinion it provides the best flavour out of any RDA out there at the moment, it is absolutely fantastic and really sets the standard for RDA’s. You can mouth to lung inhale and direct lung inhale perfectly fine.

£20 for an original genuine RDA of this quality is an absolute bargain- this out performs RDA’s double/triple the price on flavour. This has performed phenomenally well, I love using it on the iStick 50w for a proper stealthy set up. Cloud chasers might be put off by the small build deck, but this RDA isn’t built to chase clouds (despite the generously sized airflow slots), this little pocket rocket is all about the flavour, flavour chasers will be right at home with the Freakshow Mini. These are selling like hotcakes at the moment and stock is hard to come by, and rightly so given just how good the Freakshow Mini is. They say good things come in small packages and the Freakshow Mini certainly lives up to that billing!

We purchased this item for review from Vape Geek - at a price of only £19.99 it is well worth the money.  To win one of these you can enter the compeition here.