Introduction to the 454 Big Block V2

The original 454 Big Block Rebuildable Dripping Atomiser was released in 2014 by Kryptonite Vapor to a great reception from vapers and reviewers alike and became a popular and sought after RDA due to its large and accommodating build deck, and unique design allowing for multiple coils and crazy builds within. The 454 Big Block could easily handle single to quad coil set ups, and became one of my favourite RDA’s due to this and the phenomenal flavour and cloud production I got from it.

Building on the success of the original, the increase in popularity of ‘mini’ RDAs and listening to feedback from users, Kryptonite Vapor have made some design tweaks for the 454 Big Block V2, but do these tweaks equate to an improved experience or is it a case of if it ain’t broke don’t fix it?

The 454 Big Block V2 comes packaged in a very nice stainless steel presentation box, and comes with not too much in the package really, see below!

Style wise it is the same as the original 454 Big Block RDA, so users of the original will feel right at home. In fact, the design is pretty much exactly the same, even the excellent build deck hasn’t changed thankfully, however you will find that the drip tip is now (slightly annoyingly) fixed to the top cap and the height has been reduced to 27.5mm.

For those who haven’t used or experienced the original 454 Big Block, the V2 is a very compact RDA, constructed of stainless steel, featuring the aforementioned fixed wide bore drip tip, heat dissipating fins on the removable top cap, 4 adjustable airflow slots on the exterior, ‘Made in the USA’ at the bottom along with the 454 logo.

The build deck is the unique selling point of the 454 Big Block V2. It has remained the same as the original 454 Big Block and that is a really good thing, because the original 454 Big Block had in my opinion one of the best and easiest build decks to use out of any RDA available. You have a single positive post with 4 post holes going around the outside to trap down one of your coil legs, the other coil leg is secured by the stainless steel retaining ring that screws down nicely and really improves conductivity and in turn performance. The juice well is generously deep and can hold plenty of juice, which is a good thing, because when you have this monster set up with quad coils it’s one hell of a thirsty beast!

New users might feel overwhelmed at first, especially with the deck being primarily aimed at vertical coil set ups, but once you get to grips with it pretty quickly it becomes a dream to build on. There is loads of room in the deck to build here and the deck is very forgiving too, the Phillips head screws are smooth as anything, and I never snapped a coil leg whilst trapping a coil leg down. The machining of the 454 Big Block V2 is excellent in general, not a drop of machine oil was present on mine, nor were there any rough or sharp edges present. It really feels like a quality and premium bit of kit. 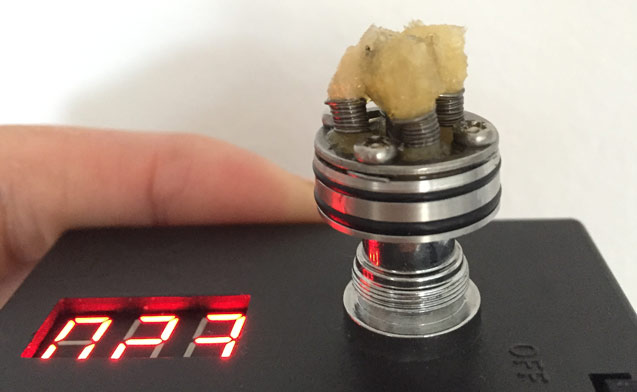 Personally I prefer going for the full quad vertical coil set up for maximum flavour and big clouds, this is pretty difficult to impossible in a lot of other RDA’s, but in the 454 Big Block V2 it becomes very easy to setup and install, and provides outstanding flavour and cloud production. There is loads of room to fit the coils in and you are still left with a comfortable amount of space which means you don’t have to worry about the coils touching and resultant hot spots from this. The flavour I found has drastically improved over the original with the shorter height and the clouds are still absolutely fantastic, whether you have it set up in single, dual or vertical coil mode. I found I could really ramp the wattage up when going for clouds and cloud chasing at 100w+ was absolutely fantastic, a full flavoured vape with some absolutely massive clouds provided by the quad coil build!

Featuring 4 easily adjustable airflow holes on the top cap, the airflow can be easily configured to support single to quad coil set ups, as each individual hole can be closed off in order to support your build. The airflow holes will line up with your coils provided that your coils have been placed correctly in the deck, and they are generously sized as well to provide maximum airflow to your coils. Cloud production really is fantastic regardless of the coil configuration that you have gone for, the fixed wide bore drip tip helps to deliver maximum vapour to your mouth!

Cloud chasers will be salivating over this, it obviously is not one for the mouth to lung hitters out there as even with a single coil build and the airflow closed right down you will still be lung hitting the 454 Big Block V2, opened right up there isn’t many RDA’s that can compete with the 454 Big Block V2...

Boasting both market leading cloud and flavour production, the 454 Big Block V2 is a cloud AND flavour chasers delight! It will appeal to both, as it offers brilliant performance on both aspects.

This really is one of the top RDA’s available right now, with its versatile build deck, superb build quality, easy build options and fantastic performance, Kryptonite Vapor have definitely improved flavour on the original simply by reducing the size of the unit itself, and the same huge clouds produced on the original can be chucked on the V2.

Are the small tweaks made enough to convince owners of the original to purchase a V2? Probably not, as there really is no difference aside from the smaller height and fixed wide bore drip tip, but I would recommend anyone potentially looking at buying a 454 Big Block to go for the V2 over the original as it’s available at near enough the same price as the V1, but with better flavour results over the original. It performs superbly well, is incredibly well made and worth every penny.