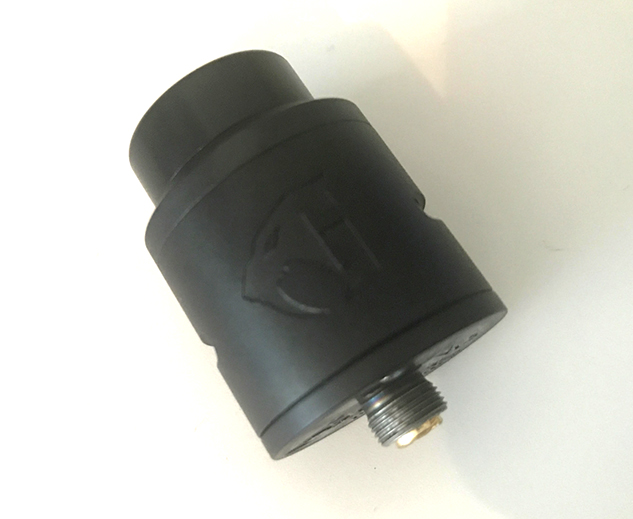 Designed by renowned coil builder Blue Eyed Goon (blueeyedgoon83) and manufactured by 528 Custom Vapes, the original Goon RDA has been a runaway success since it's release in 2016 and one of the fastest selling rebuildable dripping atomisers of all time. Vapers were enamoured with its huge building deck featuring an innovative clamp system, allowing them to get incredibly creative with their builds, and it provided supreme performance whether you were looking to chuck huge clouds or get great flavour from your eliquids.

In 2017, the Goon RDA has received an upgrade in the form of the Goon 1.5 RDA, improving upon a few aspects found on the original. You now have a domed internal cap over the flat on the original, cyclops airflow allowing for finer airflow adjustment, wider and thicker posts with most of the bridge removed to allow strength from bending and spinning, 1.5mm taller screws to allow for more clamping space, a thicker upper clamp, no gold plating on the clamps and a bottom feed pin included for squonking too.

I was a huge fan of the original Goon RDA, with it being one of the RDA's I have used the most over time, so I was hugely excited to get my hands on the Goon 1.5! Let's see how it performs...

Much like the original Goon RDA, the Goon 1.5 is packaged within a presentation pouch featuring the 528 Custom Vapes logo and the Goon logo. Inside the pouch you'll find the Goon RDA itself, spare o-rings, an allen key, four spare allen key post screws and a hex bottom feed pin so that you can use the Goon 1.5 with a squonker. 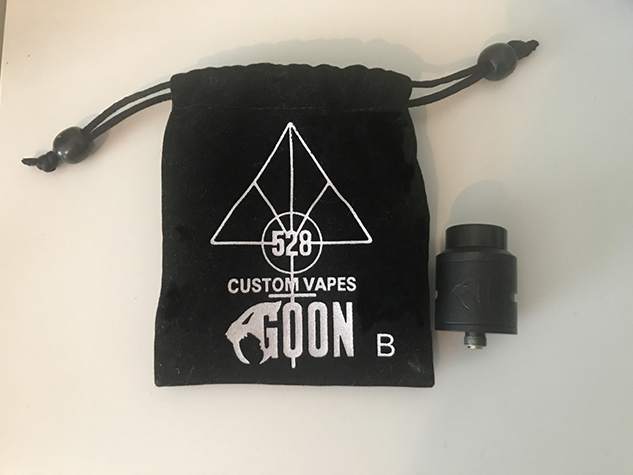 Much like the original Goon RDA, the Goon 1.5 comes with four different finishes available. You can choose from stainless steel, black, rose gold and gold, with the Goon 1.5 top caps fitting the original Goon RDA and vice versa. The Goon 1.5 is a 24mm width RDA, that has a deck and top cap manufactured from stainless steel, and a fully adjustable hybrid safe 510 connector that is manufactured from gold plated brass. The 510 connector can also be swapped out for the included botton feed pin if you wish to use your Goon 1.5 with a squonking mod. 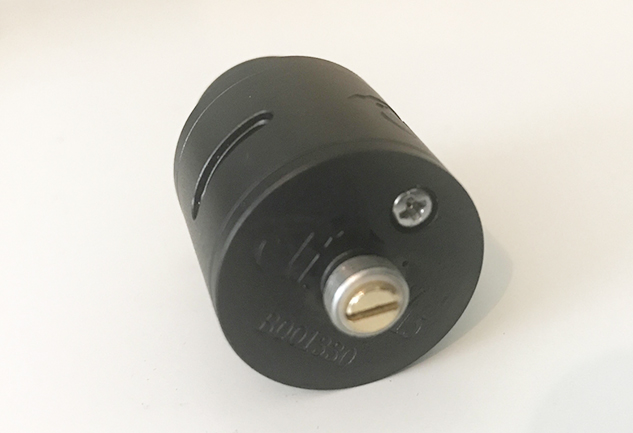 At the top of the Goon 1.5 you'll notice the cavernous half inch wide drip tip, this is removable and once removed you will see the 528 Custom Vapes text engraved around the drip tip connection. The Goon 1.5 doesn't feature a standard drip tip connection, so if you do wish to use a different drip tip you'll need to source one specially made for the Goon, I would recommend having a look at Big's Tips for different Goon drip tips.

As with the original Goon, the Goon 1.5 feels like a really well made atomiser. The engraving has been nicely done, everything fits together just fine, no sharp edges are present, it's machine oil free and the o-rings seem to have perfect tolerances, meaning that the top cap sits firm on the deck and doesn't require too much force to remove. It suits my black Sub Zero Shorty mechanical mod perfectly, making for a beautiful all black set up!

One of the aspects of the original Goon RDA that made it such a runaway success was the vast amount of deck space available to build on, and this has been optimised even further with the Goon 1.5. The ease of build went down a treat as well, the innovative bridge clamp system making it a breeze to mount any type of build on. 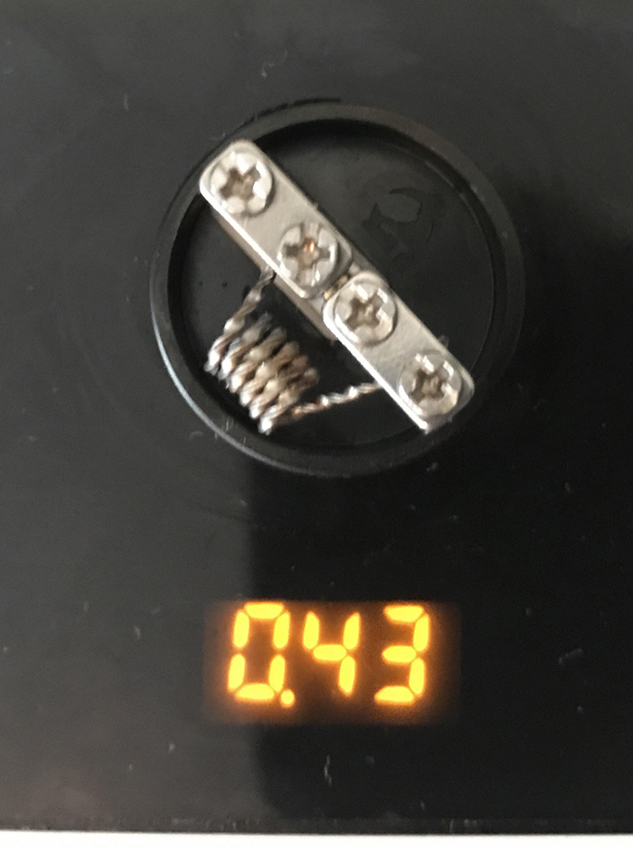 With the Goon 1.5, the bridge clamp system remains however the posts are now wider and thicker, with most of the bridge removed to allow strength from bending and spinning. The screws have been increased in length by 1.5mm to allow for more clamping space, and the upper clamps have been thickened. The gold plating has been removed from the posts, as some users had complained this had chipped off over time with the original Goon, and the internal cap is domed instead of flat cut to give even more space and also increase the intensity of the flavour.

The Goon RDA was one of my favourite RDAs to build on and the Goon 1.5 is no different, the clamps hold my builds down nicely and give stable resistance, and I have a whole load of room to play with and a generous juice well. There's even still a single coil option as well, as you can close down one side of the airflow to allow for this.

Instead of the airflow holes found on the original Goon, the Goon 1.5 now features adjustable cyclops airflow, which allows for even finer airflow adjustments. Airflow is adjusted by rotating the top cap, and the airflow adjustment itself is incredibly smooth. The cyclops airflow slots on either side of the Goon 1.5 are absolutely massive, and when you have both wide open it feels even airier than the original Goon RDA did- which is quite something!

One of the aspects that really surprised me with the original Goon was how good the flavour was, however in my opinion, the flavour seems to be significantly more improved with the Goon 1.5. The original boasted great flavour, but it just seems even more pronounced with the Goon 1.5 with even more flavour notes detected in my eliquids and an even smoother flavour delivery. Without a doubt it's up there with a lot of the best RDA's I've tried when it comes to flavour, and that improvement has come from the slight adjustments that have been made to the internal cap as when I put the OG Goon cap on the 1.5 deck, the flavour is a touch muted.

Cloud production is what the Goon 1.5 truly excels at however, and with the new cyclops airflow the Goon 1.5 even manages to vastly improve on the original. It's a whole new beast with the cyclops airflow, and it just billows out phenomenal amounts of vapour. Whether you are vaping at high or low wattage, the Goon 1.5 doesn't fail to deliver, and it's right at the top of the game when it comes to cloud chasing.

The original Goon RDA was a hell of an outstanding atomiser, but the refinements that Blue Eyed Goon and 528 Custom Vapes have made for the Goon 1.5 have taken it up to a whole new level! From the flavour to the cloud production, and even the build deck, the Goon 1.5 is an even more well rounded package than the original was. I've been massively impressed with the Goon 1.5 and what it offers, and like the original it has become one of those RDA's I just can't put down!

The Goon 1.5 was purchased from Custom Vapes for review, you can purchase one here. 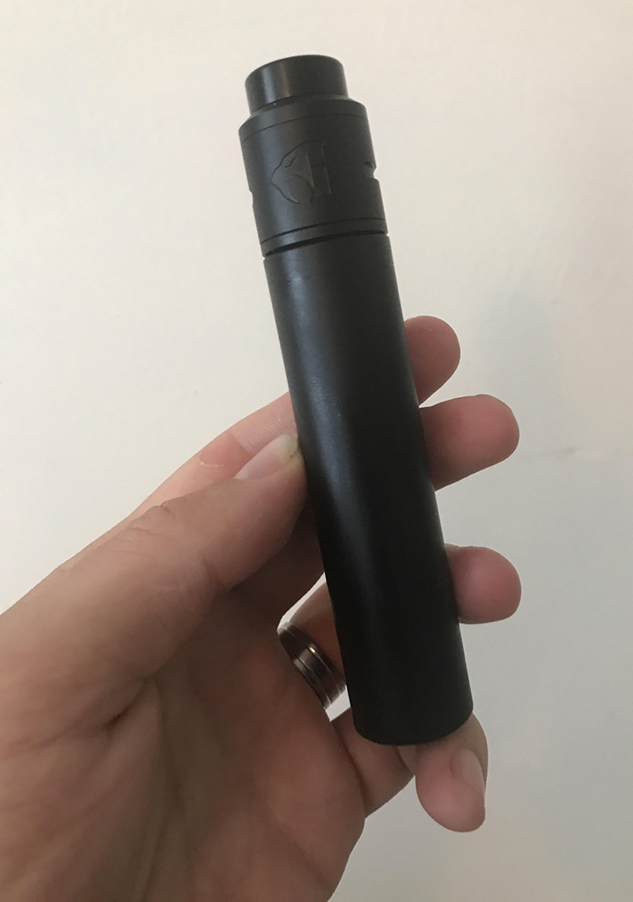