Many thanks to Wotofo and Antonio for supplying the nexMESH Subohm tank for review.

This is the Wotofo rebranded nexMESH tank and other than now carrying the Wotofo branding, it is the same as the OFRF version. The review tank supplied is the non-TPD version so 4ml and 5.5ml tanks are included.

The nexMESH comes in a simple but stylish package. The outer case now has the appropriate branding with scratch and verify labels on the front and sides and a list of contents and the usual ecig/nicotine warnings on the back. Inside is the tank with 0.2 Ohm A1 coil, 0.15 Ohm SS coil, 5ml bubble glass and a bag of various size and colour O rings. 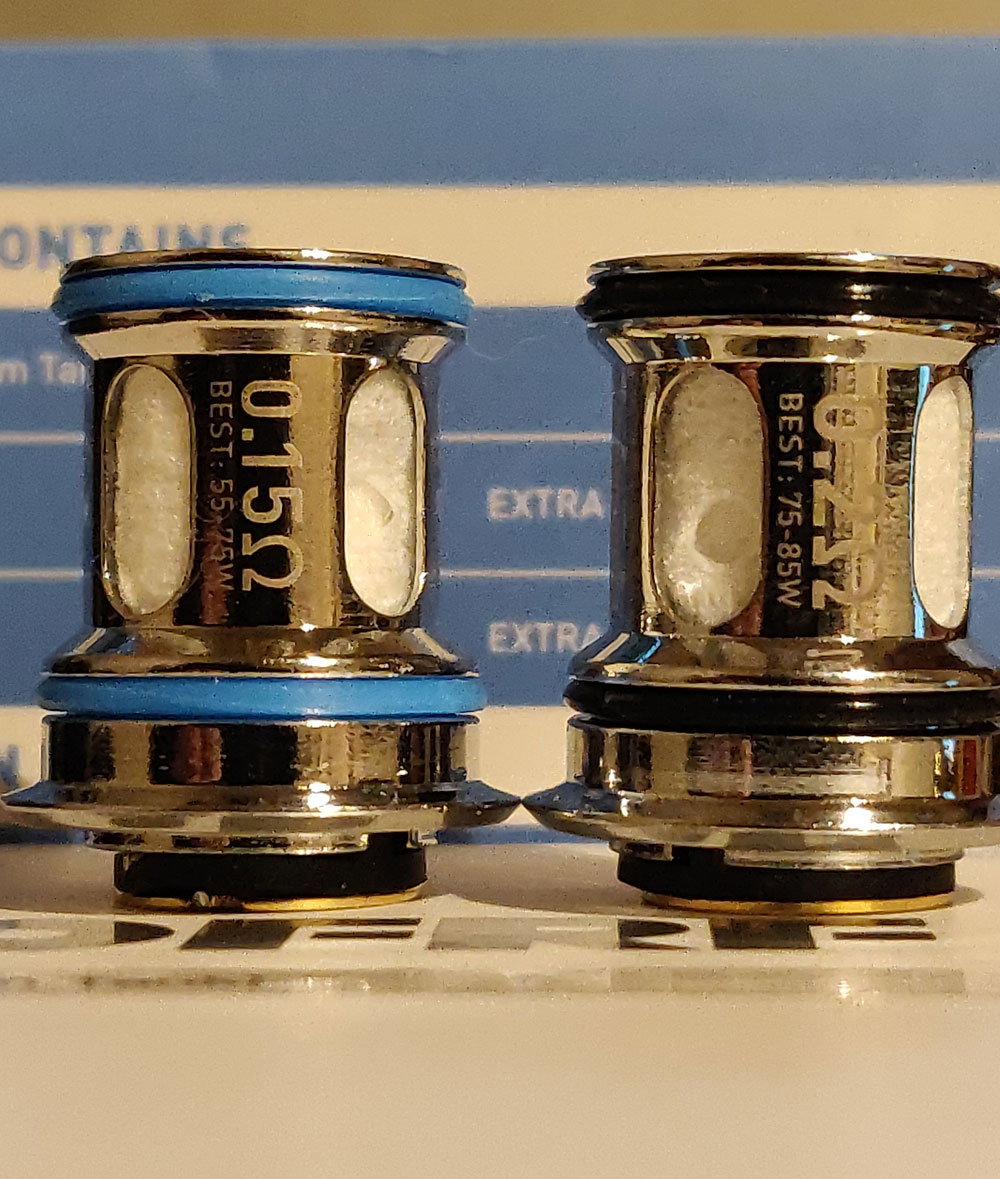 This is a solid, well constructed tank. The threading is smooth. Airflow is delivered via three large cyclops holes with plenty of adjustment by way of a silky smooth (but not loose) ring around the base. A sliding top cap revealing a split gasket provides the fill port. Coils are a simple push fit, no screwing on or off required. Unless there’s less than 2ml juice in the tank, swapping coils is best advised on an empty tank.

Before filling for the first time, I replaced the 4ml tank for the 5.5ml bubble glass. Happily this isn’t one of those obtrusive bubble glass tanks that add too much girth to an already large tank. As with the majority of the slide top fill tanks, the drip tip gets in the way of all but the longest bottle nibs. Removing the drip tip is the easiest way to avoid mess. Other than that, the only thing I could find fault with was the gasket covering the fill hole. This has a split to insert the bottle tip but I found it restricted how far the tip could enter and I ended up with a pool of juice on the top. One way around this was to lift the gasket and expose the fill port, filling this way was quick and clean. There is a breather hole exposed when the top is slid open for filling so no issues with pressure. I swapped to a thinner bottle spout and refilling through the gasket was fine with little/no excess juice being spilled. The installed coil was the 0.2 A1 Ohm so once filled, it was left for five min to allow the wick to absorb juice.

The coils themselves are marketed as the first conical mesh, tapering inside from bottom to top and designed to funnel the vapour smoothly to the tip. This does seem to intensify the flavours as the vape is compressed on its way up the mesh and into the chimney. Certainly the same juice used in this had a tangible difference to the Flow Pro tank that I had running with the same flavour. This is another stock mesh coil tank and the only one I could use to compare. Airflow, as mentioned, is fully adjustable and gives plenty of scope to tailor the vape to how you want it. Fully open, I could push the watts up to 90 but did find flavours diluted. Happy medium for me was around 70W, airflow 50-60% open. Cloud junkies will be impressed with the vapour produced, although bystanders may start tutting. After a couple of weeks (waiting for the coil to die), I got impatient and swapped to the 0.15 Ohm SS mesh to try out the TC option. I used a DNA250C mod to try out both TC & the replay functions on this coil and I was impressed. In TC, setting power to 70W and starting at 230c there were no issues. Pushing the watts up and temp to 260c, I found a very nice, flavourful vape and this only dropped as the tank ran dry and TC kicked in to prevent burning. Using Replay was just the same, I found a comfortable power setting and hit play, and again no issues until the juice levels dropped to empty. In both set ups the TC worked fine. In power mode, both coil types worked fine and this maybe down to the dual layer wicking they employ, claiming to provide quicker and more even absorption. Whatever it is, it appears to work very well. Coil life has been very good, two plus weeks on the A1 and coming up to two weeks on the SS, with no signs of discolouration on either. I haven’t pushed either to the max on their rated top power but I have been impressed with these stock coils considering I am a 99.9% rebuildable vaper.

Being a predominantly RDA/RTA user, I don’t use stock coil tanks as a rule and the three I currently own are all mesh coil tanks. Of the three, this has been the most enjoyable to use. Great flavour, cloud chucker (if that’s you’re thing) and equally at home with either the power only A1 or TC compatible SS mesh coils. Be warned though, as with most mesh sub tanks, it’s thirstier than a V8. I’ve been impressed enough that I’ve ordered more coils as this is a keeper.

For more info on this & other Wotofo products check out the website https://www.wotofo.com/products/nexmesh-sub-ohm-tank