The Serpent Elevate RTA is a 24mm rebuildable tank designed by WOTOFO and Suck My Mod (SMM).

If you love a challenge and enjoy dry hits along the way this RTA is for you, it does have pros: great leak-proof top airflow and very easy to build, though a little plain looking.

Rating 6/10 (mostly due to unforgiving wicking)

I've bought quite a few WOTOFO attys and they have recently upped their game with the extras, it's like a goodie bag going through all the included extras, this was no exception and lots to go through.

My only gripe is the packaging is so damn tight it's hard to get some of the items out, I struggled to get the drip tip out especially, but it's a minor niggle that's soon forgotten. 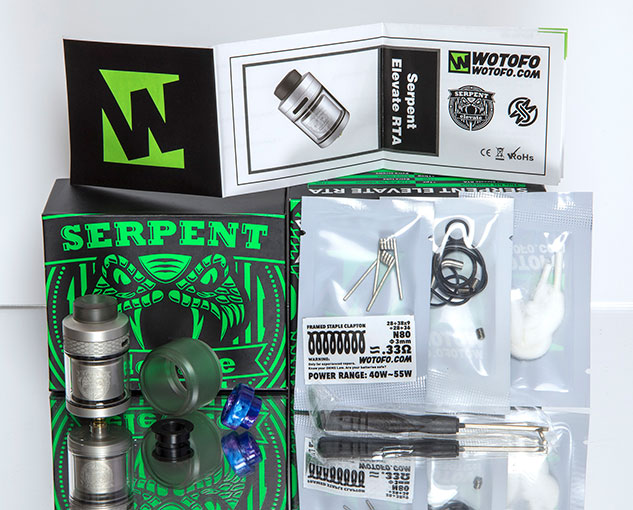 Taking it apart is a doddle with very nice machining and nothing too loose or tight.

The postless deck design looks very impressive and you can see the multiple airflow channels with it's curved coil housing and wicking base making it appear very easy with wicking, it also features 4 holes so it doesn't matter which way you wrap your coils.

It will come with a plastic coil jig to cut the leg length, though mine came with a rod, I cut it and it came out at 7mm on my coily, I think it's a touch too high and will try 6mm on my next build, but the production version will have the correct height marked for you.

Pop the coils into the corresponding holes, nip up the screws (including the unused ones as mine were loose), even out the coil and slightly space (or not if that's your preference), dry burn at low wattage, strum and remove any hot spots.

I used the provided '3mm' wick, prerolled it a little and pulled it through, I love the shoelace ends, none of that faffing around rolling the ends which can be hit or miss, no biggie but it's the small things that matter, now I found the wick to be far too tight for my liking, I was tempted to thin it out but I just went for it for the purpose of this review and will see if it works as supplied. 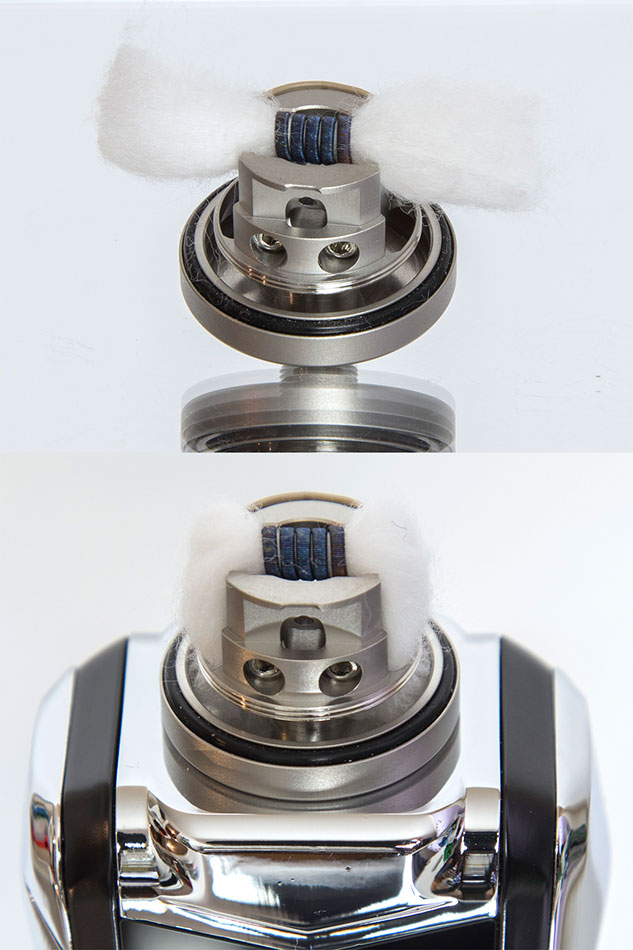 The wick length was a little bit of an educated guess, I cut them so they would sit just below the wick ports and they definitely need thinning out otherwise they will choke at the intake and give you dry hits, so after thinning out and stuffing the ends into the wick ports, I slightly fluffed up the top and that's it, ready to prime and assemble. 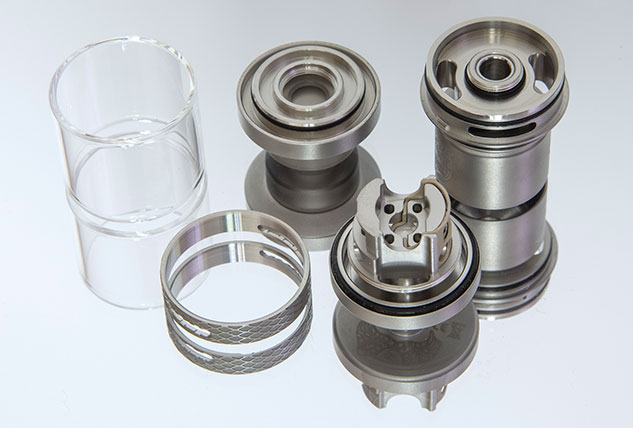 I used Darkstar Vapour 'FRUIT FUSION' and pulse juiced the coil until it wet the wicks, added a few drops to the wicks ensuring they stay within the space provided and assembled the tank, it's VERY easy to assemble, simply pop the glass onto the top cap and slide the barrel over the deck, taking care not to trap the wick, screw together and the fill up the tank, it's top fill is a screw on cap with reasonable size slots. 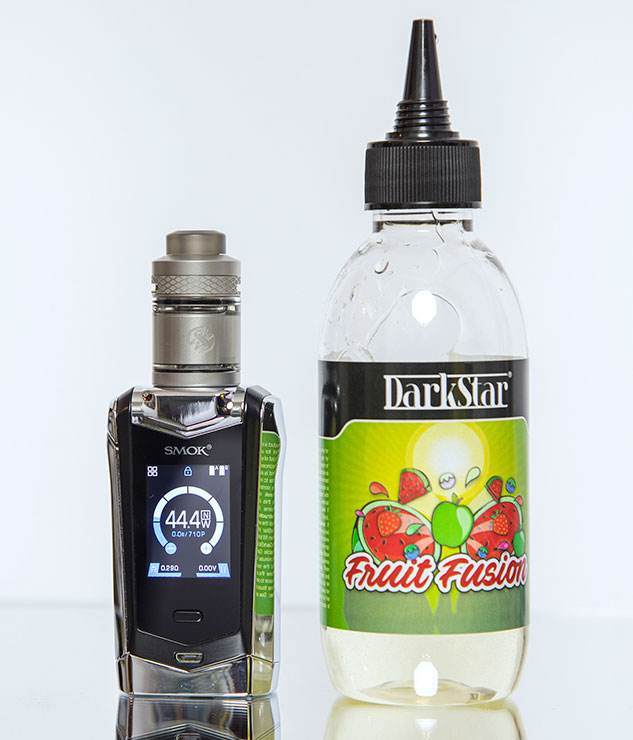 Another 'little thing' I liked was the recess in the filling area which prevents juice spilling down the bore so a pro for that. 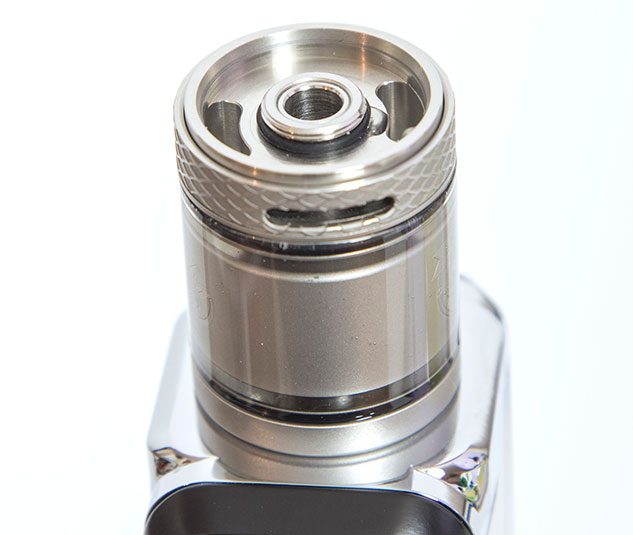 So took it out for its first vape, started out at 35 watts and increased it until it reached maximum flavour which was 45 watts before it got too warm, adjusted the airflow to suit my taste (about 2/3 open) and it produced a very nice vape indeed, flavour was coming through nicely and a very smooth airflow draw, so far so good and thought this is a winner.

I had the 3.5mm glass on it and you could see the instant bubbles as it appeared to keep up wicking perfectly, I had a little spit-back on the first few hits but I put that down to me over saturating when priming, but then noticed mild dry hits after a few draws.

Went through a few tank fills and soon found the capacity to be a pain, it soon went through 3.5ml, so I reluctantly put on the ugly plastic 4.5ml bubble tank (yours will be a much better clear glass), and off I went to keep testing it, all was well though I didn't notice as many bubbles. 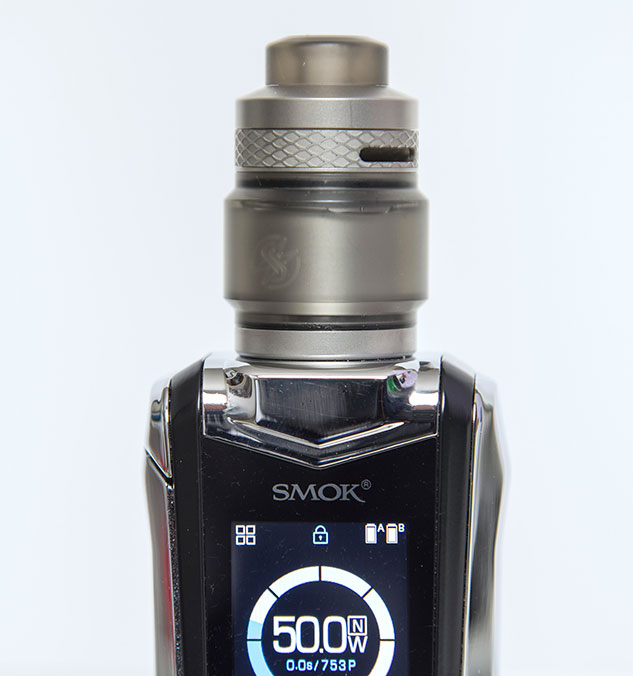 Chain vaped it in the morning and it wasn't long before I started getting dry hits, this came as no surprise as mentioned earlier the supplied '3mm' cotton was too tight in the coil, so back for a rewick and thin it out to that 'not too tight - not too loose' that you get a feel for as you build regularly, I also dropped the coil about 1mm lower, so after rewicking it I tried again, much better flavour but back came the dry hits.

I'm no novice when wicking RTA's so determined not to be beaten back I went and rewicked it, a little looser and even thinner legs, it's worth noting the coil and wick during stripping shown no signs of burning from dry hits, so back to it, guess what - dry F**king hits yet again!

I only own one tank similar enough to the Serpent, the Zeus RTA single coil and top airflow though it's much older, they even look similar though the Zeus is a little more fiddly to build & wick, so I rebuilt the Zeus with the same coil setup (used the spare coil from the WOTOFO) and juice so it's a fair comparison, there wasn't as big a difference than I expected but the Serpent did have the edge, more flavour and a smoother airflow.

Would I buy it? most definitely not, it reminds me why I prefer squonking and RDA's.

What started off as a very promising RTA it soon let itself down with VERY unforgiving wicking producing dry hits.

I've been testing this tank for 5 days now and get 3 - 5 hits on average before dry hit city, it's such a shame as those few hits are superb for flavour, I've taken to opening the fill cap to let air in to rest it, another few hits and welcome back to dryhitsville!

I'm confident I have the wicking as good as it gets so I eventually resigned myself to not chain vaping and giving it time to wick and I have to say I've been enjoying it a lot, now I've completed the review period I am going to experiment with different coils with a higher Ohms build.

If you would like to read more about this tank you can check it out on the official WOTOFO site - https://www.wotofo.com/products/wotofo-serpent-elevate-rta

I found the looks pretty bland but not the worst I've seen.

There's plenty of pros to this RTA but the few cons ruin what could have been a great RTA, it's not a tank I would recommend to a novice. 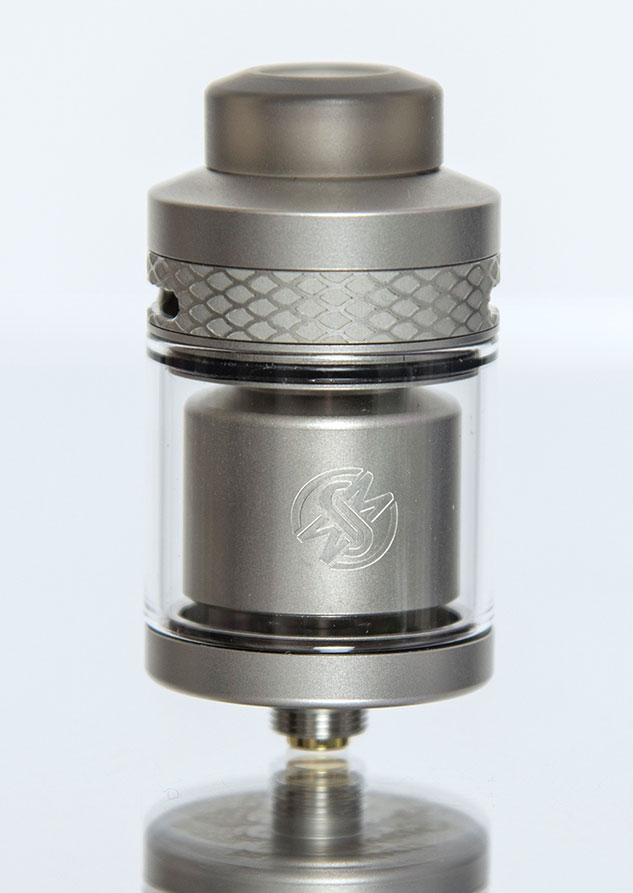