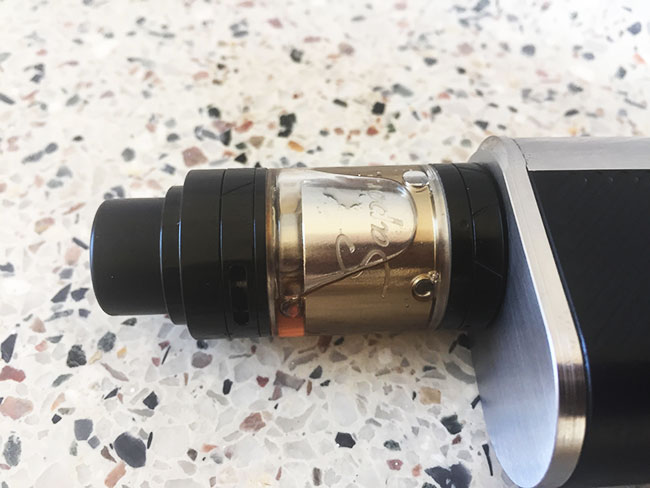 Wotofo are one of the most successful manufacturers at the budget end of the market, offering excellent authentic products at pocket friendly prices. Wotofo have had a lot of success with releases such as the Troll, Lush, Freakshow Mini, Serpent Mini and the Conqueror. The Sapor RTA is a new top airflow tank that shares it’s name with their successful top airflow dripper, the Sapor RDA.

I’ve really enjoyed Wotofo products in the past, I own a couple of Serpent Minis, the Freakshow Mini and a Sapor RDA - which I all rate very highly - so I was really interested to see how the Sapor RTA performed. Let’s have a look below at how it fared...

There’s plenty included in the Sapor RTA kit, you have the tank itself, a spare glass tank section, spare kit with o-rings, post screws and an allen key, instruction manual, a couple of packs of competition wire coils and a scratchcard which gives you a chance at winning another Wotofo product which can be dispatched through their website!

Constructed from Stainless Steel with a glass tank section, the Sapor RTA comes in a choice of two colours, you can pick up a silver or black coloured version, and it has a removable anti-heat drip tip. The Sapor RTA can be stripped down for cleaning quite easily, and should you manage to break the glass a spare is included in the box.

Capacity of the Sapor RTA is 2ml, and it is refilled through the top filling ports found at the top of the tank. Juice flow control is present, and by rotating the tank you can adjust how much juice is flowing to your coils. When filling, you do want to make sure this is closed to avoid juice flooding your deck. The juice flow control is fairly loose so do take note of this as it can be knocked out of place quite easily. You can unscrew the tank section to access the build deck, and you can access the deck with a full tank of juice as well. 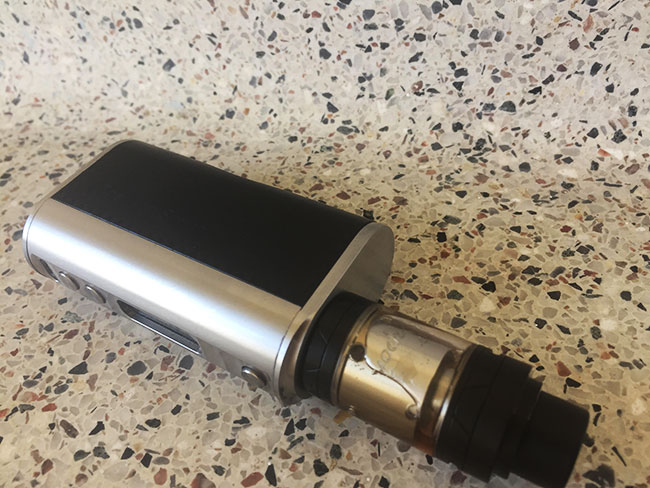 The 510 connector pin itself is fixed, and it does poke out quite a way too. If you have a mod with a shallow 510 connector you may find yourself with a bit of a gap. That does let it down a little for me, as I did have a visible gap on a few of the mods I tried this on, such as the Innokin Coolfire IV and the Efusion DNA200.

Overall the build quality is fairly solid, and it’s a pretty well built tank with smooth threading and no sharp edges.

There’s two pretty generously sized airflow holes at either side of the tank at the top, and the airflow control ring is smooth, allowing you to fine tune your airflow settings. It’s a tank aimed at lung hitters, although it doesn’t offer a huge airy lung hit, more of a restricted one, and you can get even more of a restricted hit which the airflow dialled right down. One of the great advantages of having top airflow is that your tank becomes virtually leakproof, I’ve certainly not had any leakage from the Sapor RTA at all! 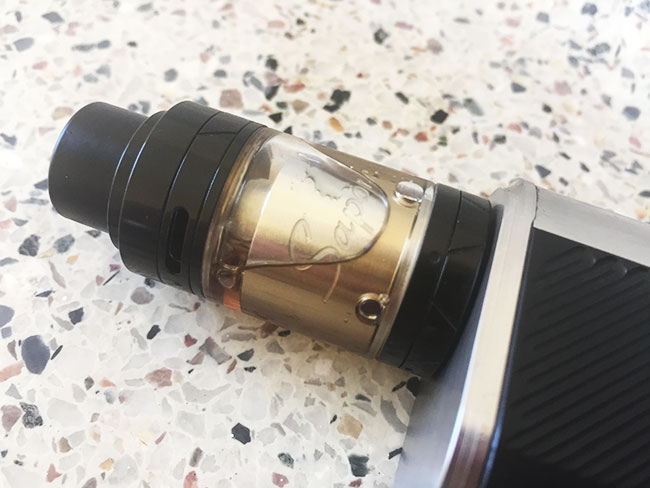 The Sapor RTA sports a two post dual coil Velocity styled deck, the most popular deck style at present. It offers a lot of space to build with, large post holes for thick coils, and wick slots reminiscent of the ones found on the Griffin RTA. The ring around the edge of the deck can be removed if you wish, however the wicking holes offer plenty of room and make it simple to place your wicks into. As the Sapor RTA has top airflow there are no airflow holes to line your coils up with, you just need to ensure your coils are placed centrally for best effect. 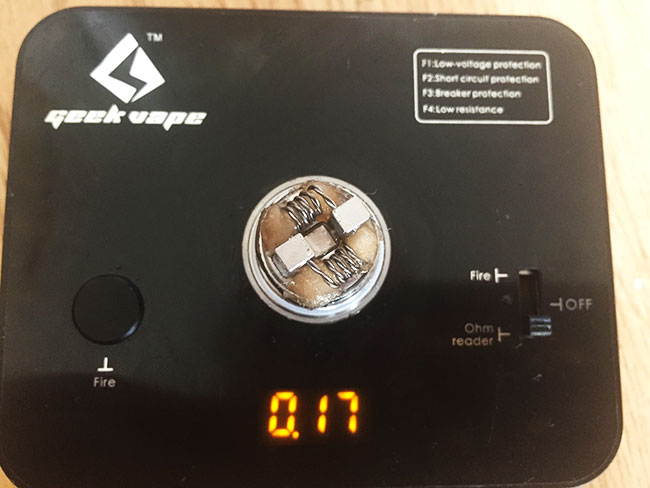 You have a couple of packs of ‘Comp Wire’ twisted coils included in the kit, which can be slotted in for a quick build, however the resistance of these is pretty low- when I installed mine the final resistance came out at 0.17ohms. Overall, it’s a pretty simple deck to build on, and it does make building and wicking pretty quick and easy. 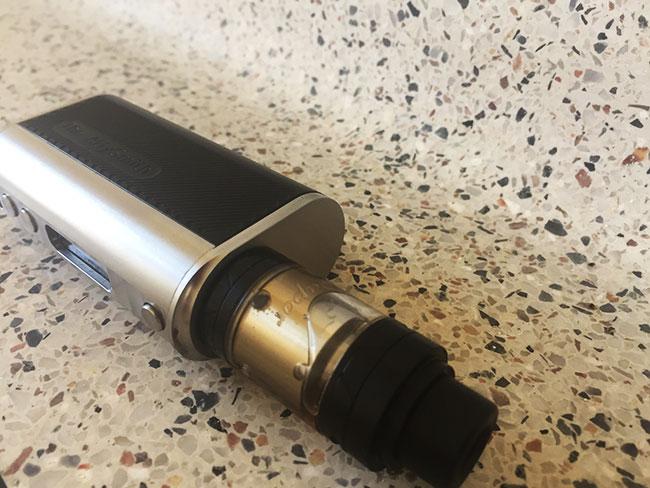 I can’t fault the wicking of the Sapor RTA either, the juice flow control system works very well indeed, and I never felt the Sapor RTA struggled to keep up with any of the juices I used. I certainly didn’t experience any dry hits whilst I used it! With the capacity being 2ml, you will be refilling often, unfortunately this is a consequence of the Sapor RTA being manufactured to be TPD compliant.

Another very good release from Wotofo, the Sapor RTA is a solid tank that offers great performance in the flavour and cloud departments, and with it being available in the £20-25 region it offers amazing value for money in my opinion. It’s dead easy to set up and build, and the build quality for a tank of this price is pretty impressive too!

The leakproof aspect of the Sapor RTA is a huge bonus, I didn’t experience a single leak from this tank, and it feels like the performance hasn’t been compromised with top airflow used to make the tank leakproof. It’s a really impressive bit of kit and if you are looking for a budget tank that provides outstanding flavour, the Sapor RTA is well worth you having a look at!  This item was provided for review by Vape Geek - thanks guys!  You can check it out on their website here http://vapegeek.co.uk/Sapor-RTA-by-Wotofo-60.htm. 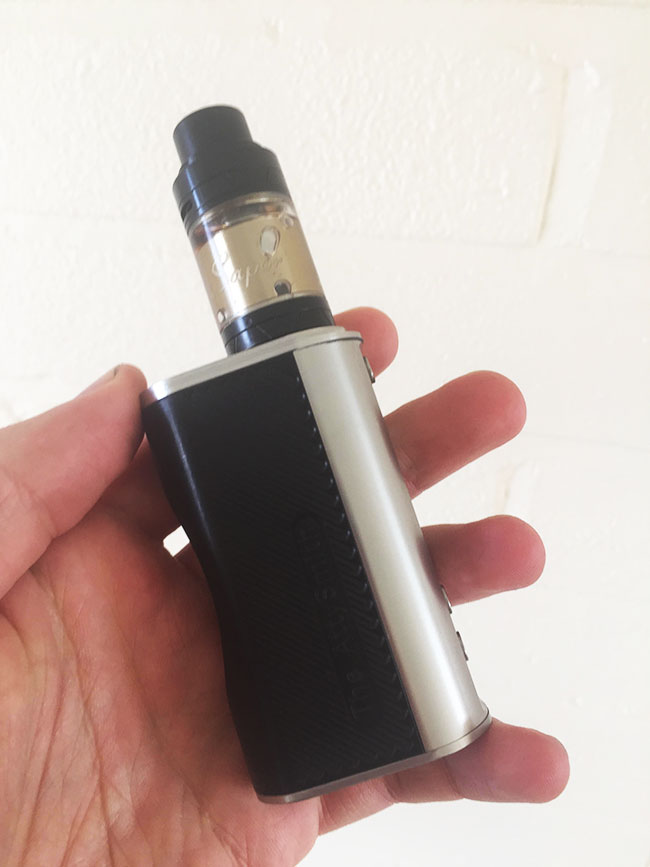