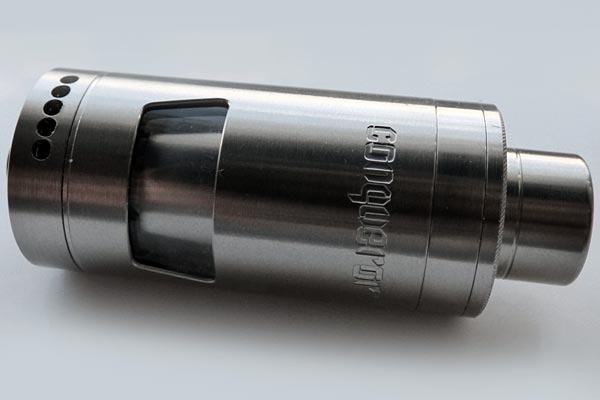 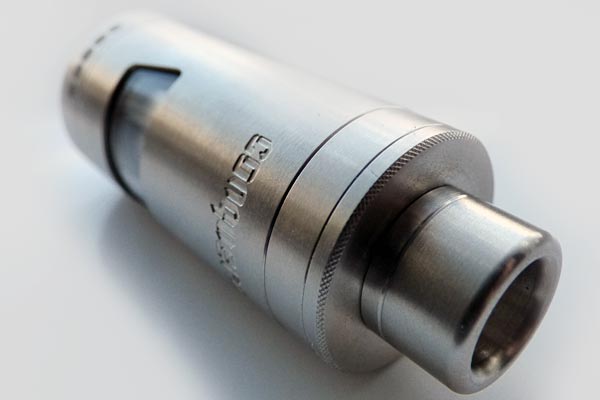 In terms of looks the Conqueror bears some resemblance to Wotofo’s Serpent tanks. The design is clean and very streamlined and the main section of the tank has two windows so you can see how much juice you have in there. One window is positioned near the bottom and the other at the top. The glass is reasonably thick and it is also recessed so there is a reduced chance of you accidentally breaking it. The upper window helps you see the juice level wen filling and the bottom window is to allow you to see how far the juice flow control is open.

The brushed Stainless Steel finish looks good and thankfully the tank was completely free of any machine oil residue so after a very light rinse I could use it immediately. The threading on the whole was pretty good but the base can initially be a little stiff to unscrew as can the top cap.

The 510 pin is gold plated so you can expect excellent conductivity. The included drip tip is made from Stainless Steel so it will get quite hot when using higher Wattage. It can of course be removed and swapped for any other drip tip in your collection since it is a standard 510 fitting.

The airflow control ring seemed a little too stiff for my liking and if you try to force it you can end up unscrewing the base of the tank which was something of a mild annoyance. After some time I realised that a delicate touch is needed and providing you are gentle it adjusts reasonably well as long as you hold the main part of the tank securely.

The Conqueror holds 4ml of juice and features a top filling system along with juice flow control. To gain access to the deck you simply unscrew the base and remove it. According to Wotofo the design gives you access to the deck even when the tank is full. I personally would rather not chance that given how annoying the juice flow control can be (more on that later) since often when someone says they have a fairly leak free design I still end up with juice all over myself. The deck features two fairly large air holes and interestingly uses a post less design much like my Rose3 RTA. 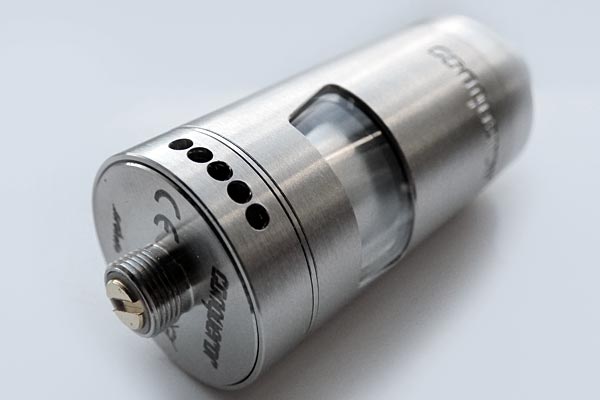 The airflow while a little awkward to adjust has plenty of options and features two slots that each have six 2mm diameter holes. The draw will suit a slightly restrictive lung inhale at its most open and can be heavily closed down to give a reasonably restrictive mouth to lung vape. I do feel that the adjustment ring could be improved so it turns easier but I cannot fault the nice variety of airflow options. 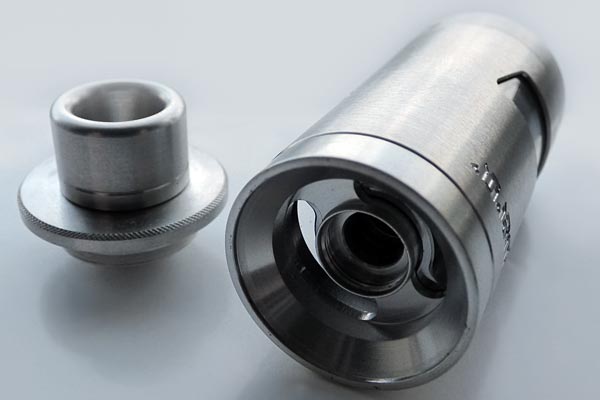 As I said earlier the deck is of the post less variety. The way this works is that you fit the legs of your coils into the base of the deck and tighten down the screws from the side. The only things you have to be mindful of is to make sure your coils legs are not too long so the coils are not too high up or you will end up shorting them out when you connect the rest of the tank. 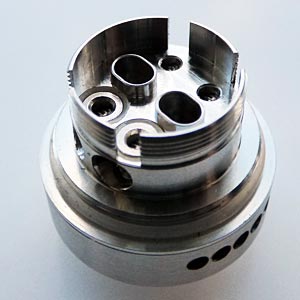 You also need to make sure your coil legs are not too short either since the airflow holes are raised up slightly and once again could lead to another possibility of shorting out. I had no problems with the screws since they were decent and secured the wire well. Wicking is also very straightforward and providing you cut the wick tails short you won’t run into issues. The tank is dual coil only I am afraid so anyone who prefers single coil RTA’s should look at other products.

The real trick I found is to make sure you securely hold the juice flow control in place with one hand while unscrewing the top cap with the other. It is far more of a pain than it really needs to be but I think in time you could probably get used to it and given the reasonable price of the Conqueror I think that I can be a little forgiving on this occasion.

My set up was a 0.5ohm dual 26 gauge build using 2mm diameter coils wicked with Japanese cotton. I primed the wicks and filled up the tank with Manabush Coyote Coconut and I must admit the Conqueror was a seriously nice vape!

I got some very thick clouds and the flavour was extremely good. Cloud production while dense is not as room fogging as some other tanks and pure cloud chasers probably won’t find it for some but from everything I have read that wasn’t really Wotofo’s intention and the Conqueror is designed purely for flavour. The draw was rather pleasant and I did like the way I could adjust it between a slightly restrictive lung inhale to an even more restrictive mouth to lung vape depending on my mood. Ideally for mouth to lung vaping the included drip tip is probably a little bit too wide bore and you should probably swap it for something with a smaller diameter.

The juice flow control while not the best designed feature certainly does work and I had no problems with dry hits when using FRSTD 60VG/40PG Brown Cinnamon Sugar. I see no reason why you should have issues with 70VG or even 80VG juices providing you open the juice flow enough. 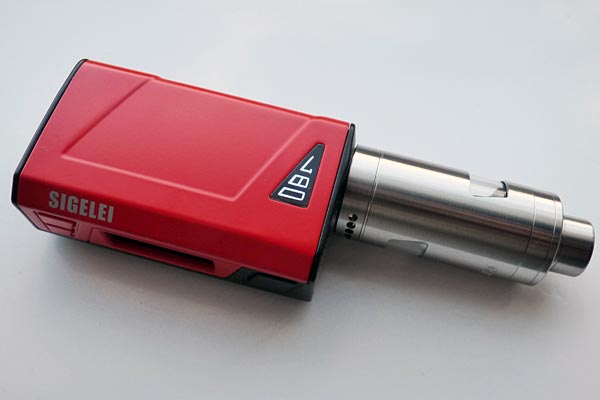 The Conqueror despite having some design flaws and a few annoying quirks certainly does vape well and offers a good amount of flexibility for varying vape styles. Given the relatively low price and considering the decent level of machining it is certainly well worth picking up but do be mindful of its minor shortcomings. You can check the Wotofo Conqueror out on Vape Geek's website http://vapegeek.co.uk/Conqueror-RTA-by-Wotofo-96.htm where is is priced at £24.