Wotofo & Suck My Mod have created a new MTL RTA for builders who prefer high nic/nic salts. It is 22mm in size and with an innovative variable airflow system incorporating a gear/cog system. Read on to see if this system is more than just marketing hype.

Thanks to Antonio and Wotofo Official for sending this to me for personal use but I felt it fair to give a review in return. The thoughts expressed are my own and there is no influence from outside.

In the now familiar black and green packaging with clear lid, this is instantly recognisable as a Wotofo offering. On the back is printed the usual manufacturing notes and warnings. Along the sides, there is a list of contents, branding and an authenticity sticker. 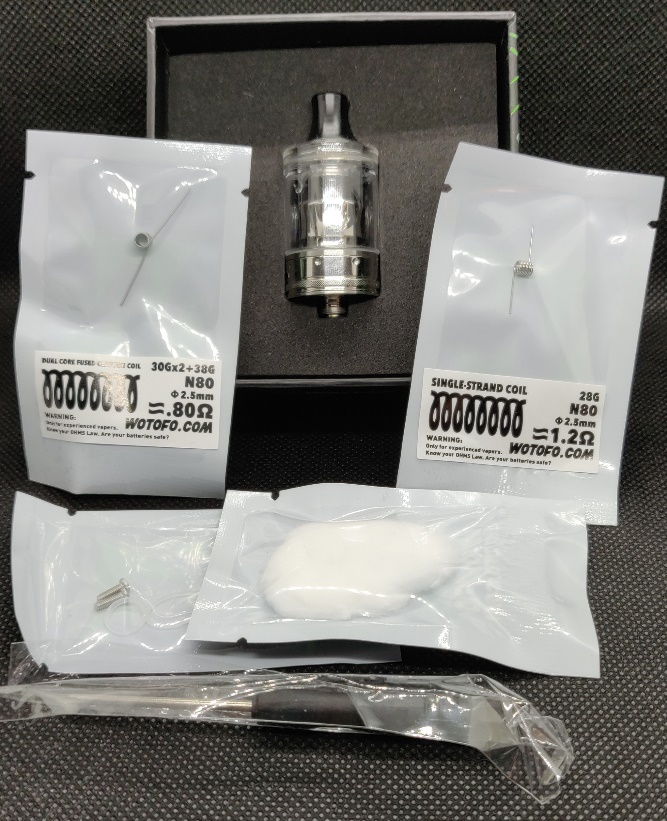 The Cog is 22m, with a 3ml capacity (2ml TPD version), and it stands at 50.6mm tall including drip tip. The tank is made from PCTG (food grade plastic) with an inner steel chimney and top cap. The drip tip is a standard 510 fitting with double O rings, and the inner bore tapers out slightly from bottom to top. On the base of the RTA is a clear window, through which you can see the cog system. The top fill is easy with two decent sized juice ports and the top cap is also PTGC giving the whole RTA a classy glass look. For thorough cleaning, the chimney is removable by unscrewing the slotted screw in the top of the chamber. The inside of the chimney is domed, helping to keep turbulence down and flavour concentrated.

The airflow adjustment is via the bottom ring. This has an elliptical air slot that allows air in, and the adjustments are made via the cog system. There are five dimples set in the ring and these line up with a little arrow which click into place to let you know it’s positioned correctly. This allows the selection of the following airflow holes: 1.6, 1.4, 1.2, 1.0 and 0.8mm.

Rotating the airflow rotates the cog inside, and moving one of five restrictors directly underneath the deck airway reducing turbulence. 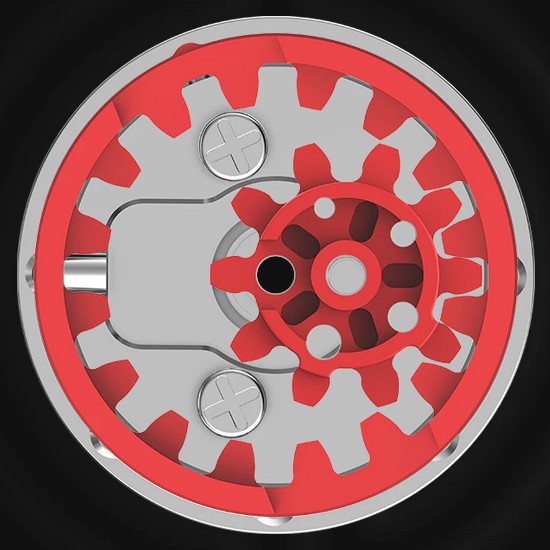 The two post deck is spring loaded, making coil fitting a breeze, and coils can be fitted legs up or down according to preference. Wicking is pretty forgiving and the best results I got was with cotton fluffed up, excess trimmed and pushed through the ring so it was just visible below. I found the first time I wicked it, putting cotton to the bottom gave a borderline dry vape. 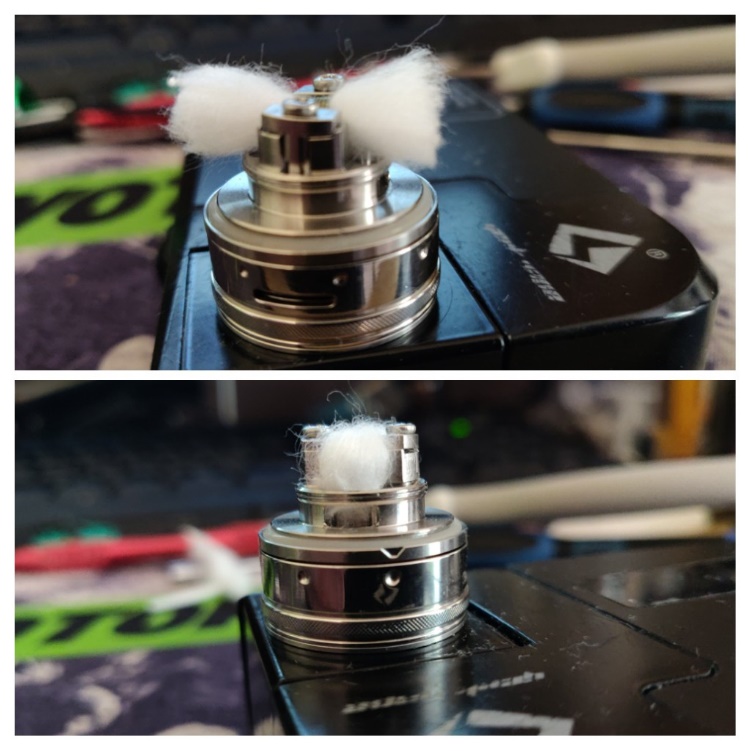 Once coiled and wicked with 0.8mm Clapton, I filled up with some 50/50 10mg nic salts. Unfortunately, I have an issue with salts so I swapped to a 70/30 freebase mix and I set watts low to help bed the wick in. From the off, flavour was plentiful and upping the power to around 20W, the vape was comfortably warm and the was flavour spot on. I started on the largest airhole and slowly decreased the airflow, dropping watts down at the 1.2mm mark to prevent overheating. At the smallest setting I had dropped to 15W but this is a lot tighter than I would normally vape at. For me personally, the 4th and 5th airflow settings were ideal, but somebody who vapes MTL normally would likely find the more restricted the better. Airflow is exceptionally smooth all through the settings with no gurgling or spitting, except when I forgot it was MTL and tried to take a big lung hit. On to the 1.2mm coil, and I’ll state now, this is not my comfort zone. I found good flavour on some 50/50 freebase and again the airflow was smooth, but it took all day of only vaping this style before I was really comfortable. This is not an issue of the Cog, just personally too many years of vaping DTL. I asked my partner to try as she vapes tight MTL and she was really taken with the flavour and vape. She also tried it with the nic salts and, compared to her stock coil tank, she was bowled over. Unfortunately, she can’t rebuild, but I think she’s got her eye on this as she keeps asking when will I be finished with it.

Although this isn’t my preferred style of vaping, the Wotofo Cog has been a pleasure to use. It’s clever airflow system made for a very enjoyable vaping experience, and even the partner was so suitably impressed that she quite happily vaped on it for a few days with no issues. I honestly cannot find a fault. Coiling and wicking is easy. Flavour is there in full and again the airflow is silky smooth. I personally wouldn’t invest in one but I would wholeheartedly recommend the Cog to anybody who prefers MTL with it’s various options from tight to semi restricted. It should be possible to tailor this to personal preference without having to change pins or chimney restrictors, just by adjustment.

Build quality is great, smooth threads and everything fitted together perfect. I'm not absolutely sure how well the tank material would withstand the old tank cracking juices, but being food grade, it should be fine. There is an info card regarding the tank, and the only warning is not to use very hot water for cleaning the tank and top cap which, given it’s a form of plastic, is understandable. Washing and rinsing in warm water certainly had no effect.

Thanks again to Wotofo. More info can be found here 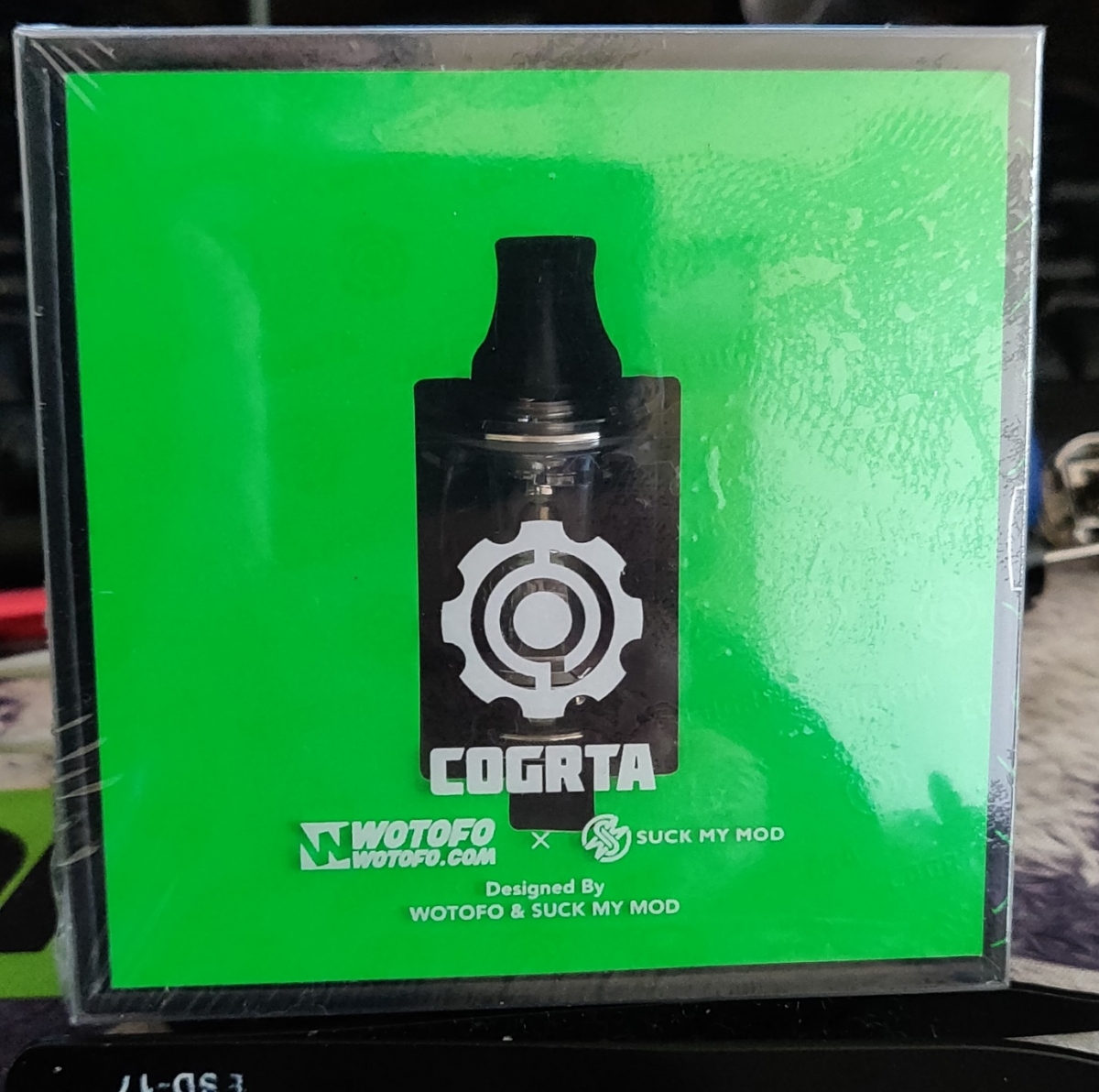