The Billow V2 is a new RTA (Rebuildable Tank Atomizer) produced by Ehpro in collaboration with Eciggity. It features many new and improved features over the Billow V1. The glass section now measures 23mm in diameter since the manufacturer wanted to retain the 5ml e-liquid capacity of the V1. However the base and top cap are still 22mm which means it will sit flush on all your 22mm mods.

The chimney section has also been shortened and the airflow screws and bottom fill screw have been removed. They have also added an adjustable airflow ring and the deck is now easily accessed without you having to empty your tank full of juice.

The Billow V1 while offering decent flavour and good vapour production had serious leaking issues and fiddly airflow screws. The question is does the new Billow V2 fix all these problems and make for a worthwhile purchase?

The packaging is very well presented and there are some good spares. The user manual is clear and well written. If the contents have one failing it is the lack of a spare glass tube for the tank. 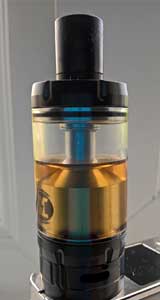 On the whole the Billow V2 isn’t the most aesthetically pleasing tank you will come across. Due to the 23mm tank it really does billow out like its namesake. It reminds me in many ways of some old barrel the way it swells in the middle.

Despite not being a looker this RTA is well machined and all the various parts fit together without issues. The air control ring is easy to adjust but it is not loose in any way. The drip tip fits well and is wobble free and the tank is compatible with all the other drip tips I have tried.

One minor thing I have noticed is that the Billow V2 seems to fit really tightly on my mods and when it comes to unscrewing if you don’t grab it by the base you can end up unscrewing the glass itself so be careful because I’ve come close to getting covered in e-liquid on more than one occasion.

This RTA is really straightforward to use. The bottom unscrews to let you get at your build deck. The deck itself has been changed slightly from the Billow V1. The cyclops airflow slots have been widened and the deck now features wider juice channels that are “T” shaped at the top to provide a small ledge for your wicking to rest on. These changes are designed to create better flavour as well as reducing the chance of dry hits.

The deck is quite small featuring a four post design but it is perfectly workable. However due to the size you don’t really want to be using more than 2.5mm diameter coils or you will run into possible shorting issues when fitting the chimney.

The Philips head screws are easy to use since they screw in without problems and don’t tend to cut the wire. Another change featured is the drip tip itself which now features a delrin base to cut down on the amount of heat produced at high wattage. The Billow V2 does feature PEEK insulators so very low sub ohm builds can be handled without the tank getting excessively hot.

I don’t normally tend to use premade coils but on this occasion I thought I might as well try them. The coils are 0.5mm kanthal and have an internal diameter of 2.5mm. I fitted them without problems and the final resistance showed as 0.28 ohm. With the “T” groove cut into the top of the juice channels it made it easy to sit the tails of my cotton wicking there.

The decision to remove the airflow screws is a welcome one and filling the Billow V2 is very easy. You simply unscrew the base and pour juice between the chimney and the tank glass before reattaching the base.

My first liquid of choice in this tank was BLAQ Origin which is a deliciously creamy strawberry flavoured juice. My first vape was truly excellent since the flavour was incredible, this tank really does compete well with RDA’s. The second juice I tried was Manabush’s Powwow Sauce and all the flavour notes found in that mix come through perfectly, tobacco, maple syrup, custard. It was truly exceptional. Funnily enough I have never been able to pick up the custard notes in Powwow with my RDA’s but I really do notice it in this tank.

At 35W with the 0.28 build it was already an impressive vape, at 45-50W it was even better and resulted in a very hot but flavoursome vape. Cloud production is absolutely superb and the Billow V2 produces very dense vapour, it really is quite a fog machine.

As for leaking the Billow V2 has shown no signs of any problems. I have left the tank completely full lying on its side for three nights running and it has not leaked once.

Being a dual coil tank it will drain your juice quicker but I don’t think that it is any worse than a lot of dual coil RTA's or Sub-Ohm tanks out there. It actually goes through juice much slower than my Sense Herakles.

The Billow V2 is an excellent tank and it has none of the issues that plagued the V1. Considering its ease of use, decent machining, superb flavour and massive cloud production this tank gives you it is truly worth every penny. In fact it has definitely become one of my favourite tanks and I know that when I use it I will get a really satisfying vape. In many ways it is actually better than some of my RDA’s which was very surprising.

The only negative I can find with this tank is that it is dual coil only which may put off or even challenge newcomers to rebuildables but it is well worth trying for such a good vape.

You could win one of these little beauties in the competition here - ends 20th AUgust.