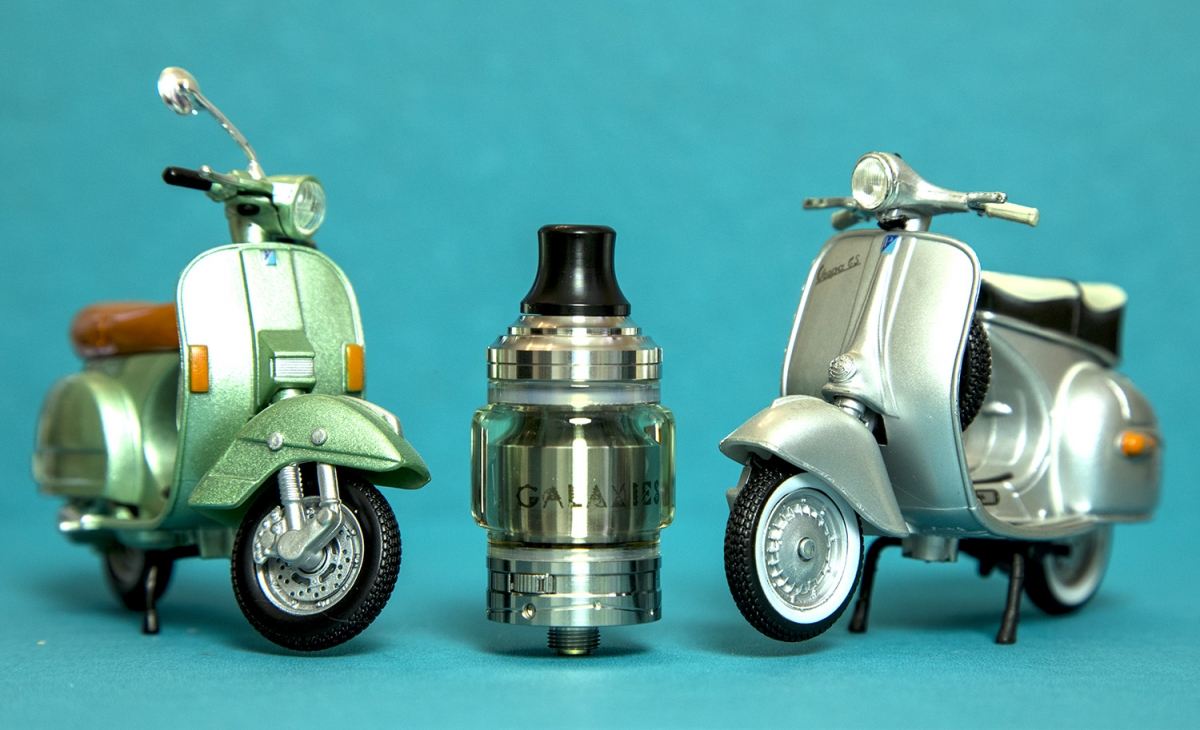 Bought with my own money review.

The Vapefly Galaxies MTL RTA is very innovative and well-engineered with great flavour. It’s one of the best MTL RTAs I have tried, not quite amongst the absolute best (Kayfun Lite etc.) but a strong contender. 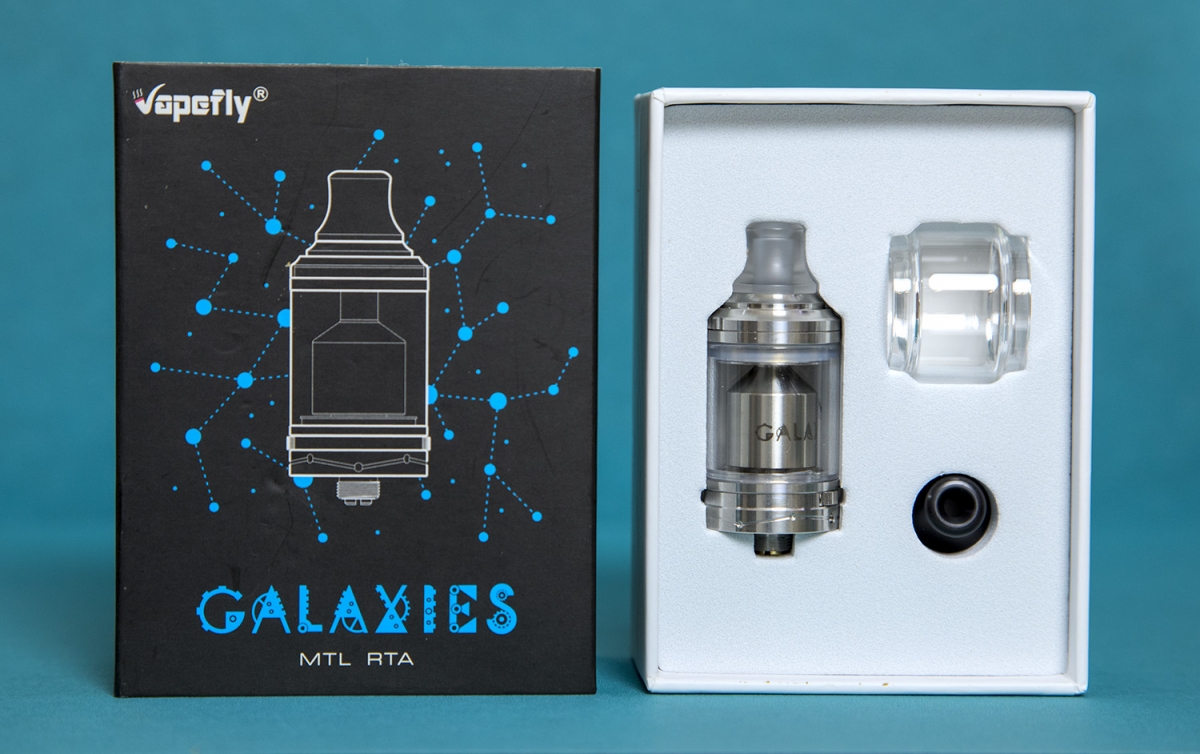 The box is simple but nice quality with an outer sleeve. The box has notches on the top so opening is easier (no shaking the s**t out of it to open it). It is also sealed with holographic foil so you know it’s brand spanking new. Opening it up reveals the RTA, optional bubble glass and an alternate 510 drip tip.

Underneath the foam insert are all the goodies and spares you need to get building: 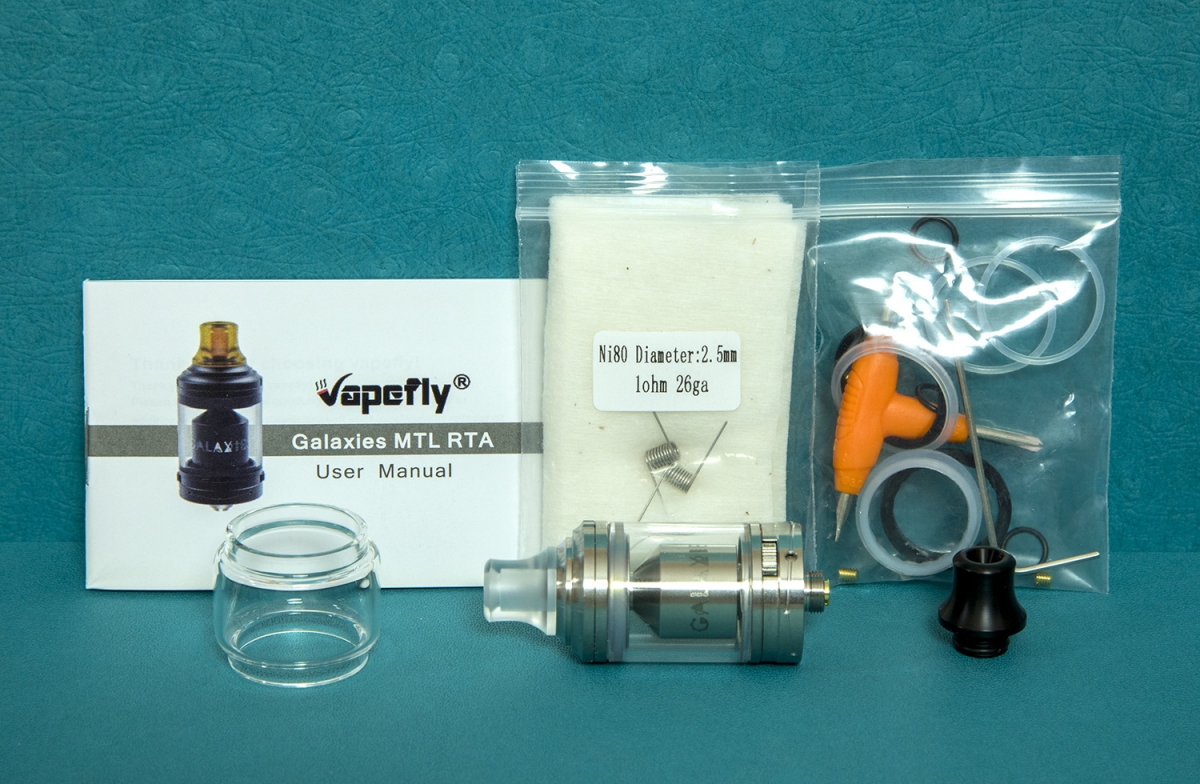 A nice little bundle with enough to do two builds, the manual is well illustrated and quality printed though as usual I didn’t read it as everything was common sense and simple to set up.

The back of the sleeve has the usual bumph and a scratch off authentication code. 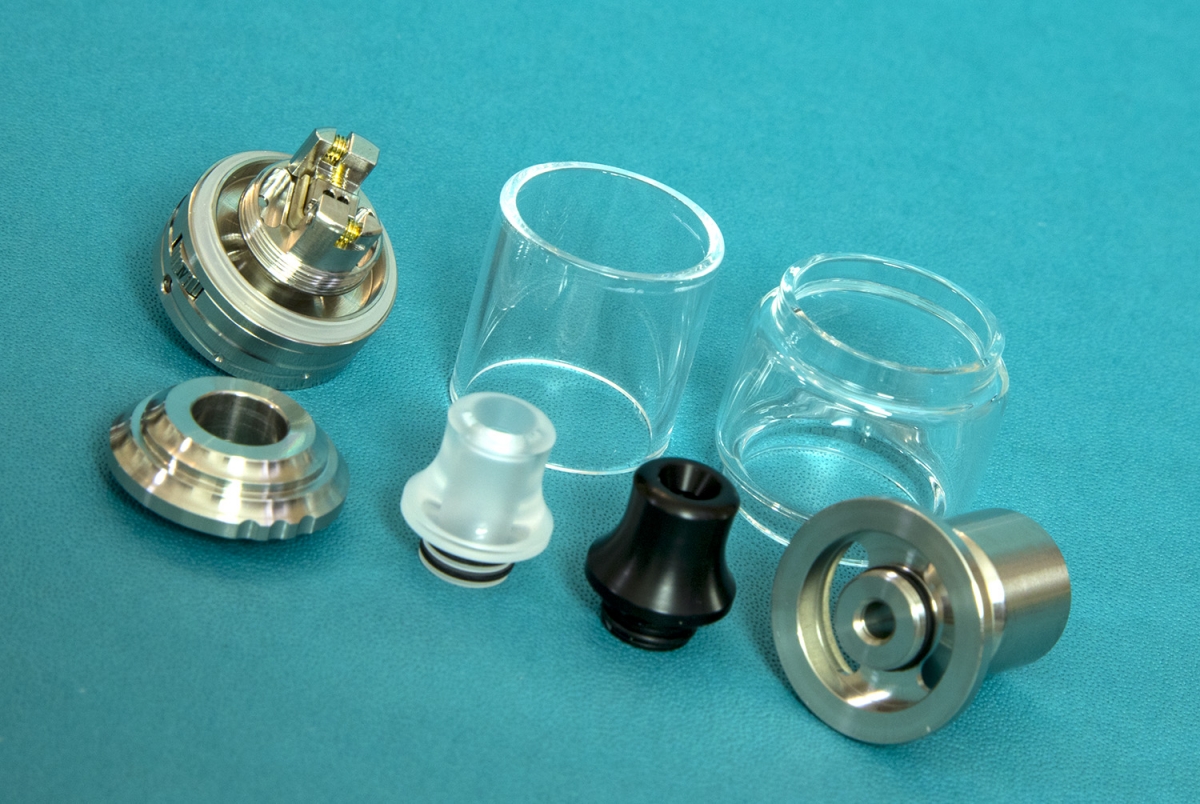 Stripping down the RTA was a little awkward and it was very hard to get the glass off. I just about managed to get it off without breaking it, mostly down to being stored dry. The next rebuild was a lot easier as I had lubricated the seals with eliquid. The design is a traditional five part system (including the drip tip), though there is an additional part that can be swapped out, the airflow ‘cube’, which I did remove but found the preinstalled one was my tighter draw preference. 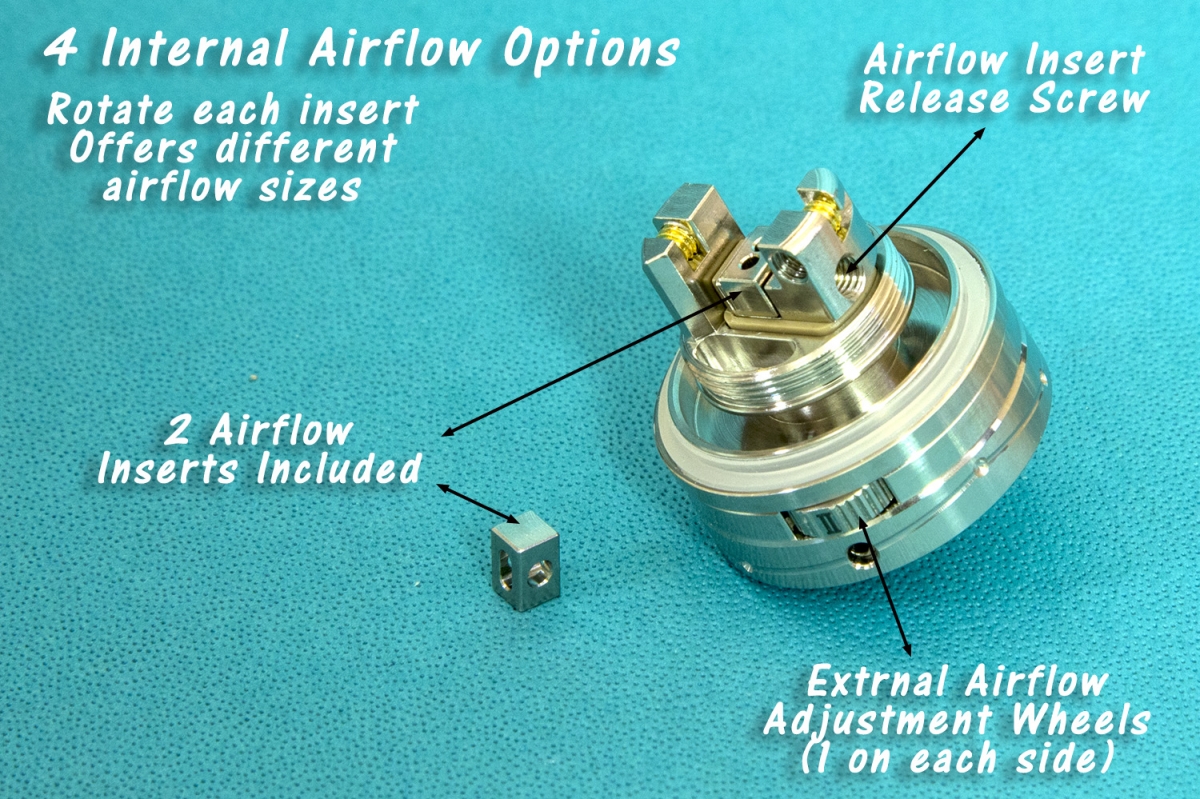 Examining the deck further is where all the clever stuff is going on with the airflow via the underside channel where you swap the inserts by unscrewing the clamp then rotating them prior to re-fitting for the configuration. As mentioned, I opted for the two small holes option. 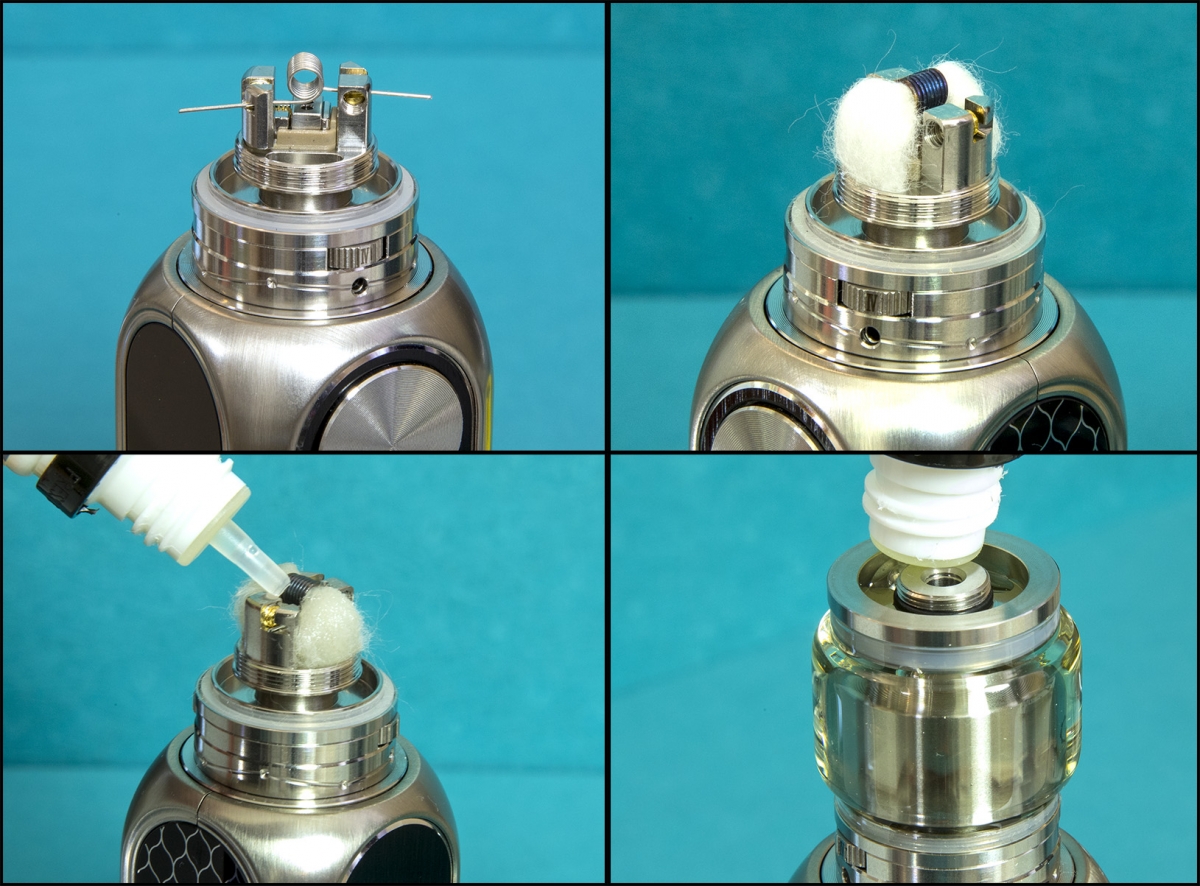 Fitting the 2.5mm inside diameter 1.0oHm coil is very simple and the clamping screws work perfectly without twisting or pulling the coil, one of the rare ones you don’t need a coil rod to help align it. Placed with the legs down, the height position was almost spot on, though I did raise it a tiny bit on my next build as I was getting spitback. Trimming the coil legs was also easy as the posts were nice and high. I then gave it a dry burn and strummed out any hotspots but the 1.0oHm was off and came out around 0.8oHms. This happened on the Galaxies RDTA too. I made my own coil for the next build. 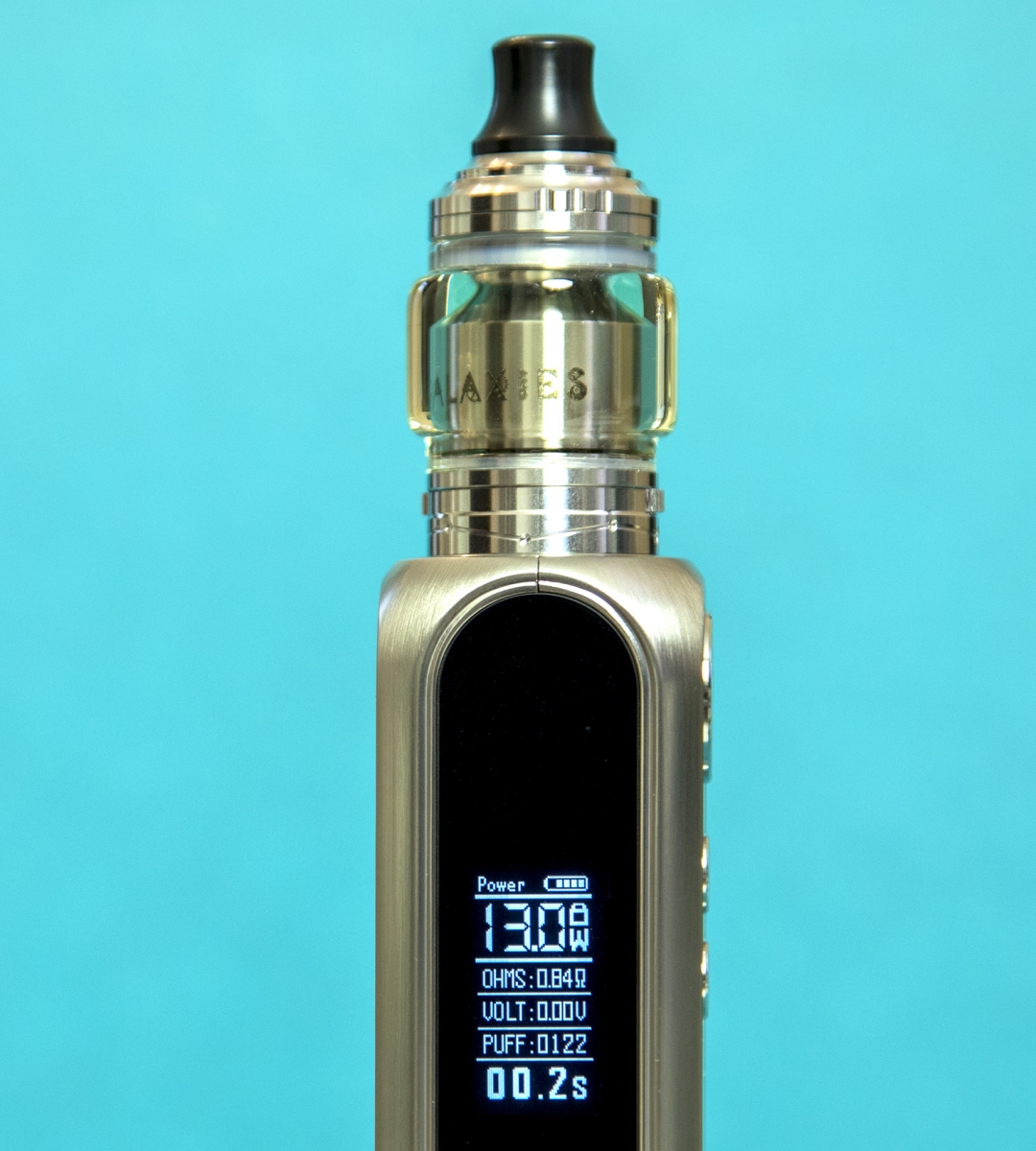 Wicking looked simple enough though I failed and learned my lesson on the first attempt. The end of the wick needs to just about reach the juice port holes which is what I had thought I had done but I was getting the odd dry hit. I trimmed 1mm off and tried again and it was perfect, no need to thin out the wick unless you go with a larger coil. I primed the coil by pulsing and adding juice until the legs were saturated.

I screwed it all back together (opting for the 5ml Bubble Glass) and the threading was perfect so no fuss or risk of cross threading, and I then filled the tank. The fill ports are plenty big enough for most bottles plus there is space for some overspill. Screw the filler cap back on, chose your drip tip and you’re ready to pop it on your mod, vape and fine tune the airflow. 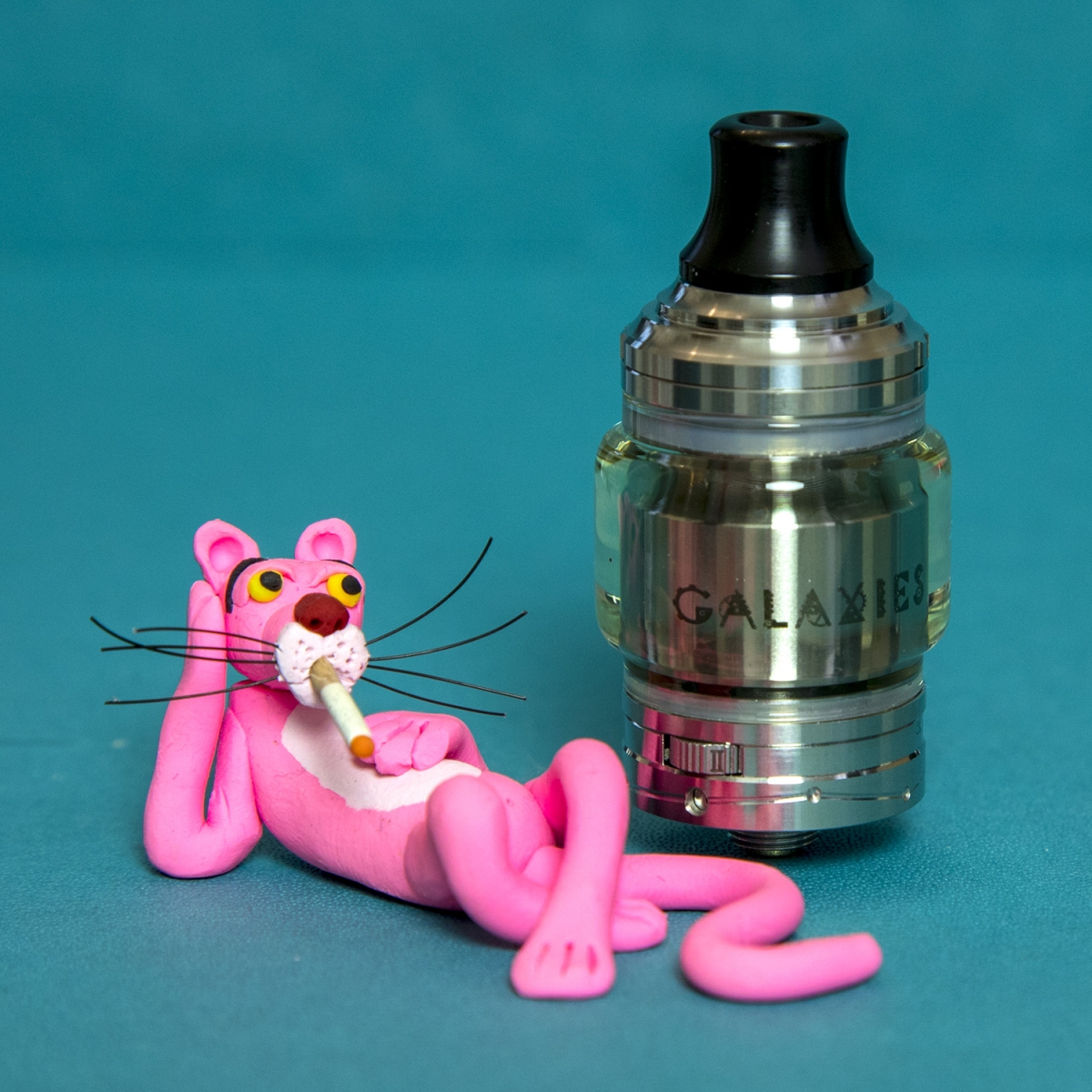 The airflow control rings on either side have eight configurations (four on each side) and are marked with roman numerals. I tried a few configurations and found my sweet spot with the smallest hole on one side and a half closed medium hole on the opposite side. You can close one side off totally for a very tight draw. The options impressed me and I like the dial style adjusters, they are fairly tight to move so there’s no chance of accidently changing them. 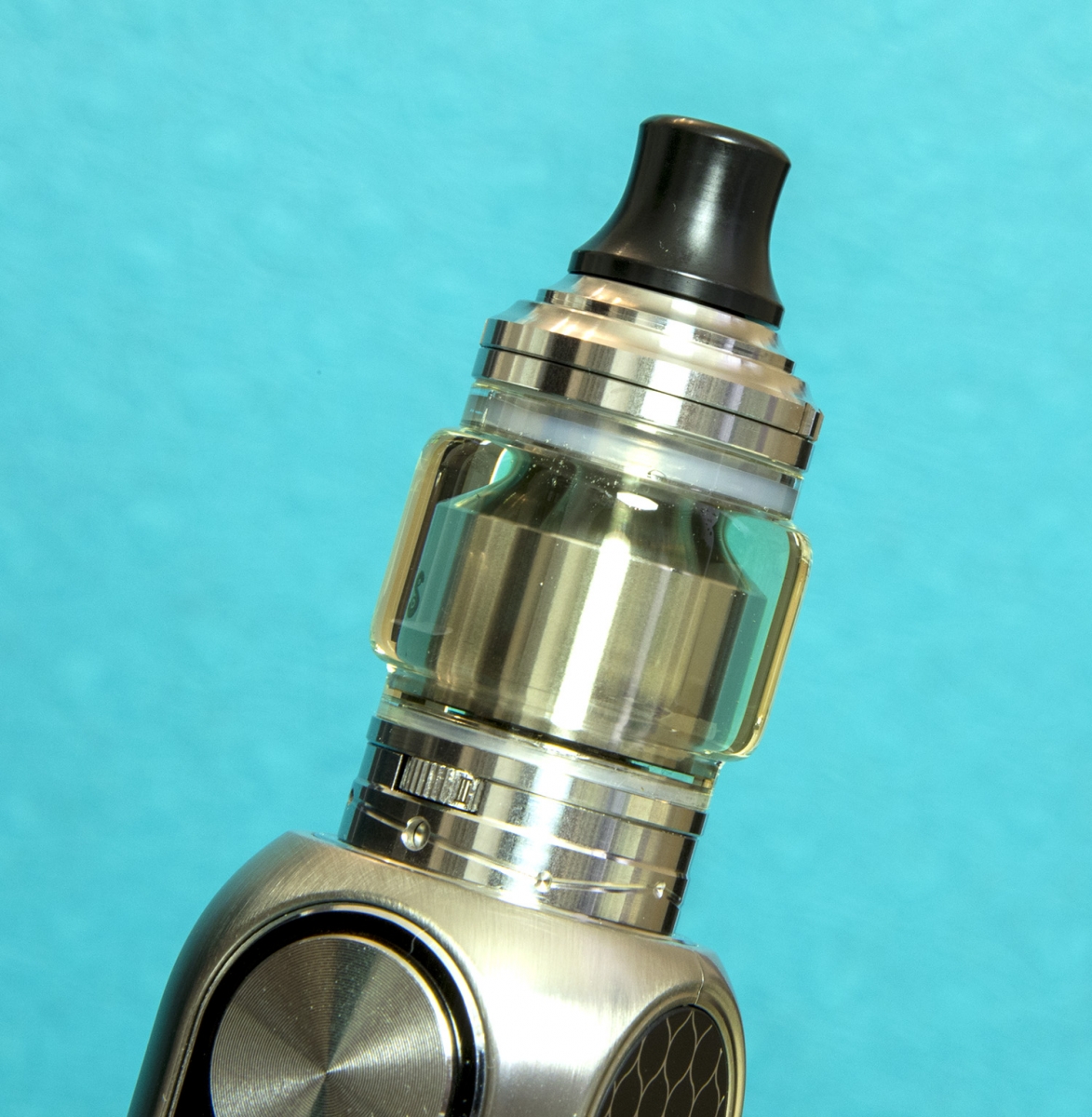 On to the fun part! I always look forward to this bit, often with too high expectations. To my disappointment, I didn’t enjoy the flavour it produced. Frustrated, I tried playing around with the watts and airflow without much success.

This turned out to my own stupid fault! Usually I test with a juice I know is nice but on this occasion I popped in a brand new bottle of Dinner Lady ‘Tropical Fruits’ 20mg Nic Salts and it tasted cheap and nasty like Poundland mixed fruits. I tried the same juice in an MTL dripper and yeah, its one minging juice!

Lesson learned, stripped it down, rewicked it and put some of my current favourite juices Jessica Rabbit Lemon, Pear and Raspberry and tried again – BINGO!

The flavour I got was excellent, almost on par with the Galaxies RDTA. I was so relieved that I hadn’t bought a duff atty! Instead I had discovered a great one, I wouldn’t go as far as to say that it’s the best but it’s right up there in my top three, the Kayfun Lite and Purity just pip it to the post, though when you consider the price the Galaxies MTL RTA is a no brainer. I am so glad I took a punt on it.

After my lesson learned that ‘you can’t judge a book by its minging eliquid’, I found the Vapefly Galaxies MTL RTA to be absolutely fantastic. It still has some novelty factor but I can’t put it down and am really enjoying the vape I get from it, smooth airflow, plenty of flavour and zero leaking (so far).

It’s not without some niggles, included coils being 20% out, the fill cap is tricky to unscrew as it is quite tight and often starts unscrewing the tank so you need to grip it tightly and finally the outer airflow dials are also quite fiddly.

After doing the photos I reverted back to the 3ml straight glass as it just looks so much better and matches the styling more, 3ml Nic Salts lasts me ages between refills.

Nothing is a deal breaker as it’s worth any effort for the rewards this superb RTA gives you.

Either I have been damn lucky (though I am very selective before I buy), but I have had four products now from Vapefly and they have all been great. I can’t wait to see what they will come up with next as this RTA at the time of writing has been out for many months.

These cons are far from deal breakers and I would class them as minor.

I have been spoilt for choice in recent months for great MTL atomisers. The Vapefly Galaxies MTL RDA has added to my dilemma of which to use, each time I find a great tank I relegate an older one to the "for sale bin". This will take some beating especially for the price. 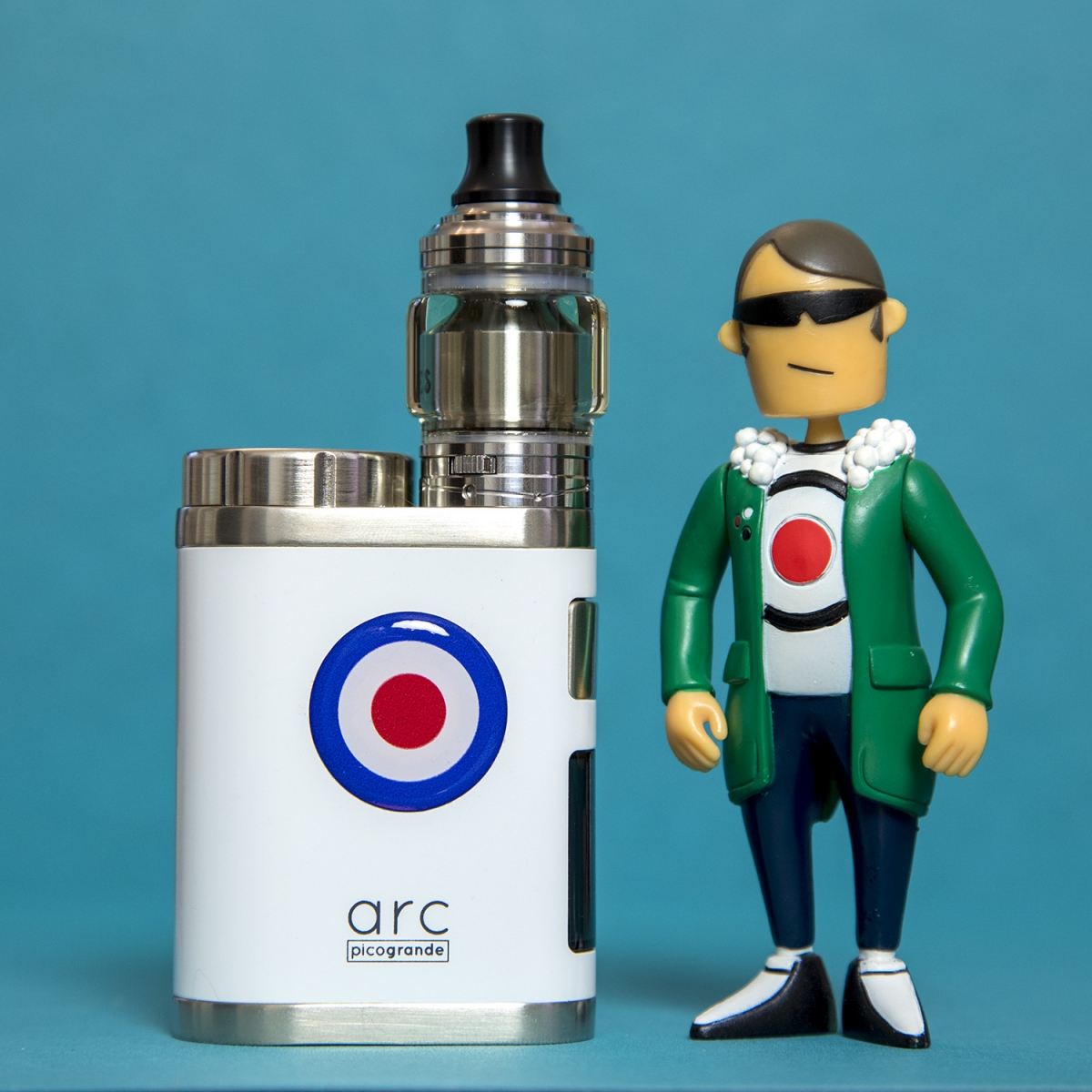