Always on the lookout for a good MTL RTA, I asked our friends over at Healthcabin if I could take a look at the latest offering from Vapefly, the Alberich MTL RTA. 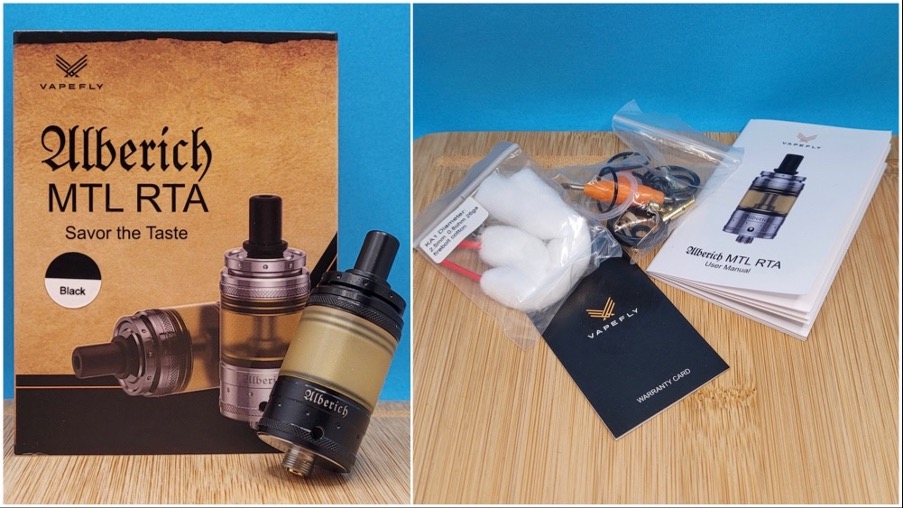 The Vapefly Alberich MTL RTA is available in stainless steel, gunmetal, and black, and I was sent the black version for review. There are plenty of extras included in the box with a full range of airflow pins and loads of spares including an extra 510 pin insulator which is a nice touch. Basically you have everything you need to get you started apart from e-liquid (assuming you already have a box mod of course!). 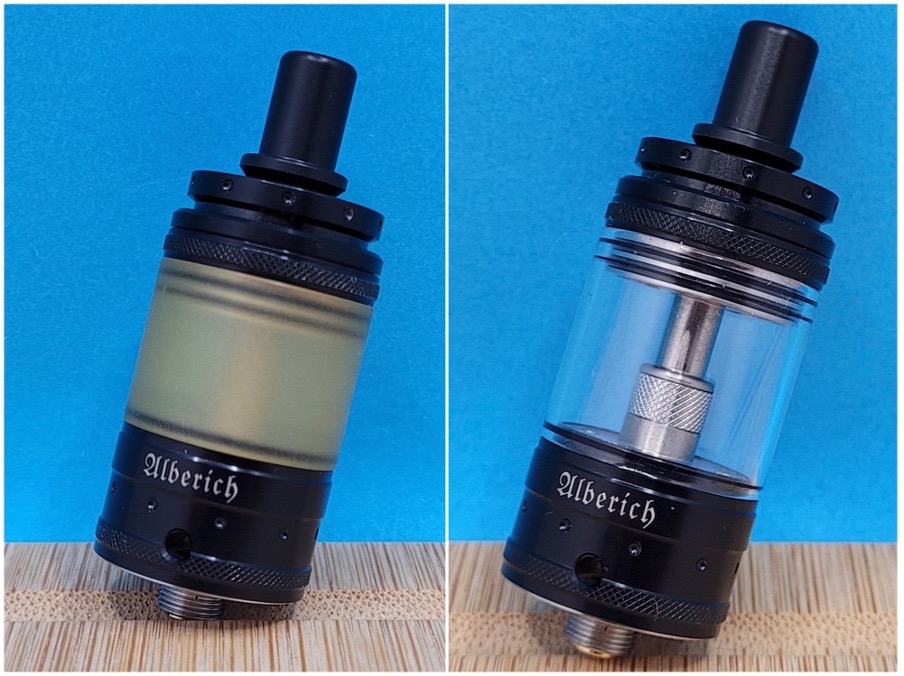 All the dedicated MTL vapers will be overjoyed to hear that this is a standard 22mm rta, the downside of this is that it makes for a relatively tall tank. There are two tank sections included with a 3ml PEI (ultem) tube fitted as standard and a 4ml glass section with a chimney extension section in the spares, this of course makes it very “German” as it becomes almost ludicrously tall with the 4ml glass fitted so I opted to stick with the 3ml PEI section. There’s no mention of a TPD edition but don’t be surprised if a UK supplied one comes with a thick 2ml compliant tank as standard. 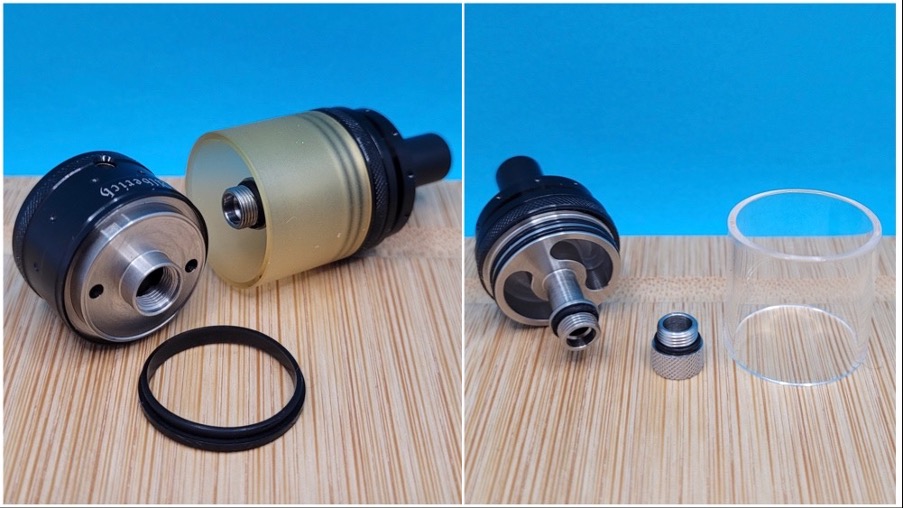 Changing the glass is straightforward enough, just be aware of the dreaded wandering O-ring at the base though and make sure this is in place. The Vapefly website actually says that both the included tank sections should be PEI with glass sections available separately but it looks as if there was a change of mind before going to production. 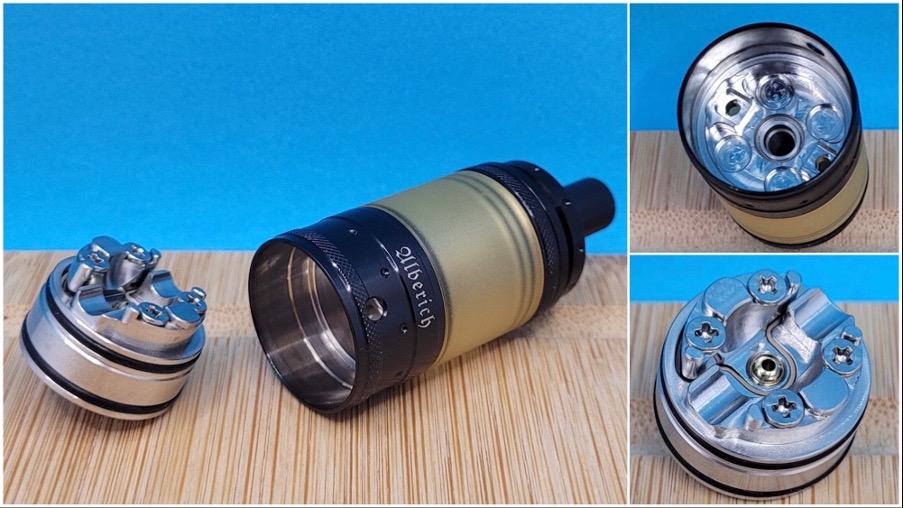 The whole tank section is held onto the build deck with two O-rings rather like a dripper and I was concerned this may become an issue with such a tall tank section but it’s held in place just fine in jacket pockets and the like. The build deck will look instantly familiar to anyone who’s used Boro style rebuildables over the last couple of years as this employs a gravity fed wicking system with e-liquid being fed to the wicks via the two holes in the bottom of the tank section. 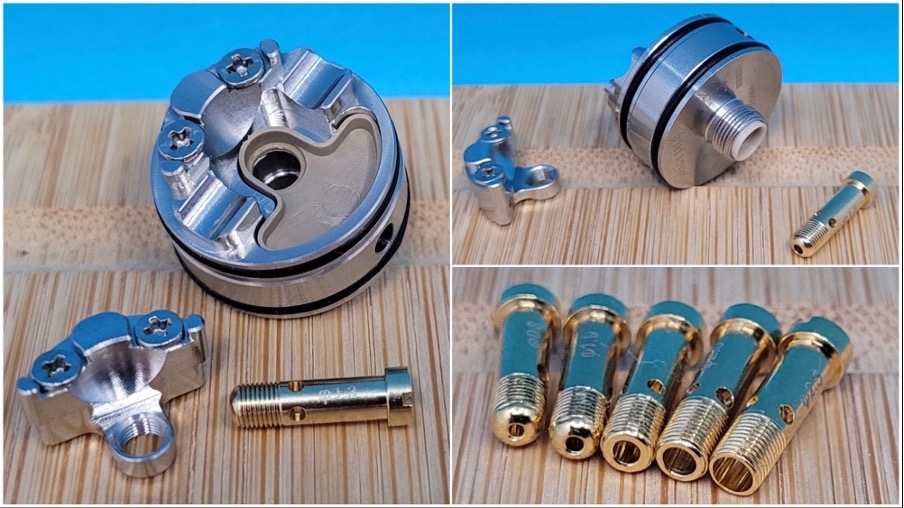 The airflow comes in from one side of the tank and is not directly adjustable, any adjustment being done via the six included 510 airpins in the box. The included pins are 0.8, 1.0, 1.3, 1.6, 2.0 and 2.5mm so you have a fairly wide spectrum to choose from all the way from an eye wateringly tight “old school” MTL up to what most would consider to be a restricted direct lung hit. Changing the pins is easy enough but as with other tanks that use this system the pin also secures the positive block in place so you’ll need to keep track of that along with the 510 insulator at the base. I would say this is a mech safe design if that’s your thing but as always you should make that judgement for yourself.

The 1.3mm pin comes installed as standard but for my preferences this was a little too tight as I prefer a “modern” loose MTL vape, the 1.6mm pin proved to be spot on though. Most users will perhaps try a handful of the pins before settling on one that suits their needs best and then never touch the others again, but I was pleased to see that a spare 510 insulator is included in the box as these are all too easily lost! Spare airpins are also available should you do manage to lose any of these. 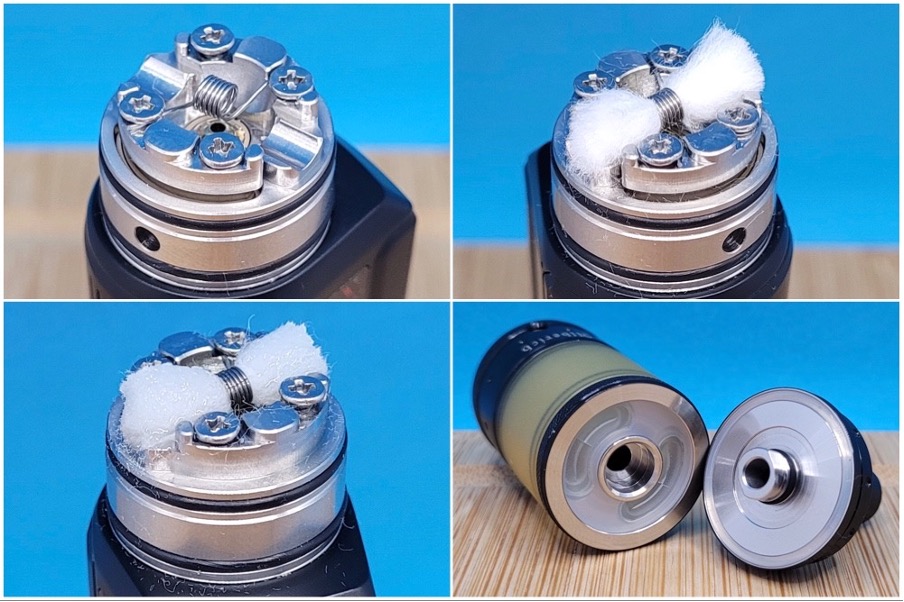 Building on the Alberich deck was easy and it will accommodate coils wound in either direction with nice ledges around the screws to help you capture your leads. You need surprisingly little wick here even with a 50/50 e-liquid although you might want to thin things out a little when using a 70/30 mix. With the tank secured in place, you can now fill via the convenient top fill cap, one other advantage of this design is if things aren’t wicking as you expected you can simply turn everything upside down and remove the tank section even when full.

This wicked just as I expected although when I rewick it again I might be tempted to thin it out just a little more, I’ve had absolutely zero leaking either. Flavour was on point with nice crisp notes coming through on my preferred mints and menthols, I even liked the supplied drip tip for a change.

The Vapefly Alberich MTL RTA has been something of a surprise hit for me. I wanted to try it out because of the Boro tank inspired gravity fed wicking and this has worked an absolute charm plus you don’t get any of the annoying condensation issues associated with a Boro tank. Even with the standard 3ml PEI tank there’s more than enough capacity for a MTL vape and I might even be tempted to get a Spare 3ml glass section at some point down the line.

Many thanks to Healthcabin for sending the Vapefly Alberich MTL RTA over for review. 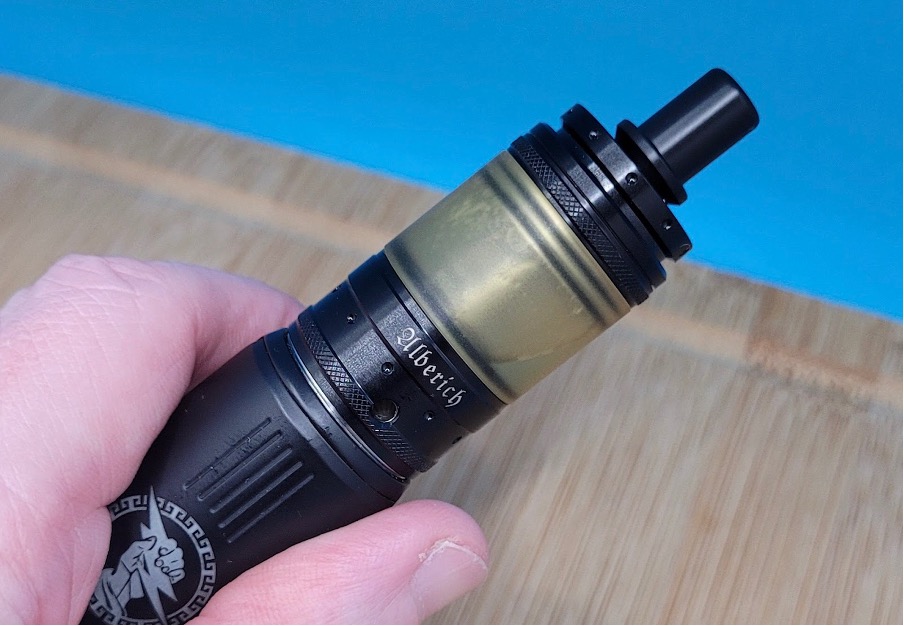