Healthcabin got in touch and asked if I’d be interested in doing a review for them again after a bit of a break. The item they offered up for review is already being covered by one of my fellow reviewers so I asked if they’d be kind enough to send out the Vandy Vape BSKR mini V2 RTA instead, which they kindly agreed to do. 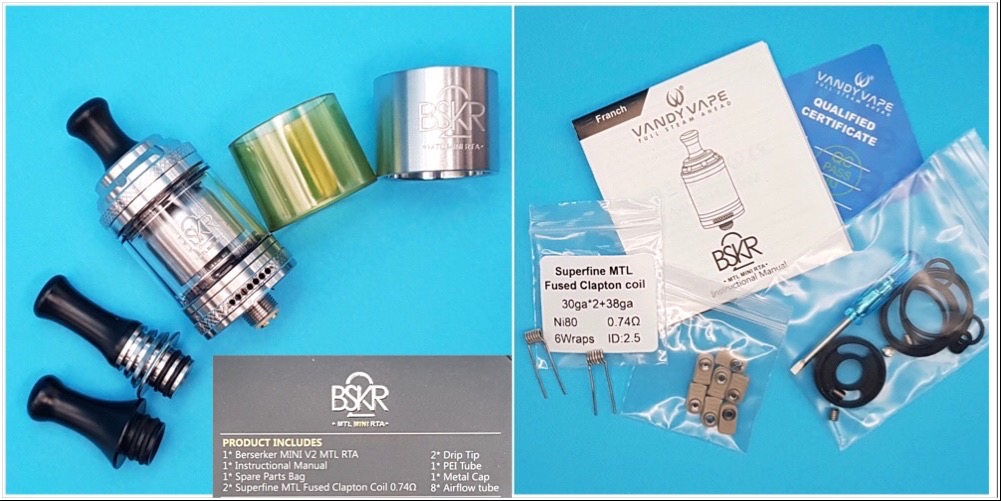 The three supplied drip tips all have an internal bore of 3.6 mm so their inclusion seems to be more to give you an aesthetic choice rather than to influence the draw. I found myself preferring the smaller pre installed drip tip but I know a lot of MTL vapers prefer a longer drip tip so the inclusion of the extras is always welcome. These are all a standard 510 size and thanks to the completely flat top of the BSKR mini V2’s top cap, you can use any of your own 510 drip tips if you have a favourite lying around.

The generosity of the pack-ins continues with the “glass” sections with three supplied in the box, a standard glass tube, a PEI (Ultem) tube, and a steel section which has a deeply engraved “BSKR 2” logo on the side. The glass and pei sections have a 2ml capacity whilst the metal tube has slightly thinner walls allowing a slightly larger 2.5ml capacity. The metal tube might be handy for those of you with butter fingers as this is going to survive a drop, but I think I’d only end up using it if I was using it in temperature control mode as you then have the obvious disadvantage of not being able to see your e-liquid levels.

You also get a whopping eight airflow inserts to try, ranging from 0.8mm to 2.0mm so MTL fans should be happy with the range on offer here. The 1.4mm airflow is preinstalled in the build deck with the other seven inserts supplied in a small zip lock bag. The genius of the design here is that the airflow inserts simply slide in to the deck from the side which means that you can swap out the airflow even with your build and cotton in place, and as the main part is peak with a metal airflow tube inserted, there should be no worries about shorting out because the insert can’t fall out in use or about melting the airflow when dry burning coils (you could additionally remove the insert altogether for that to be extra safe) 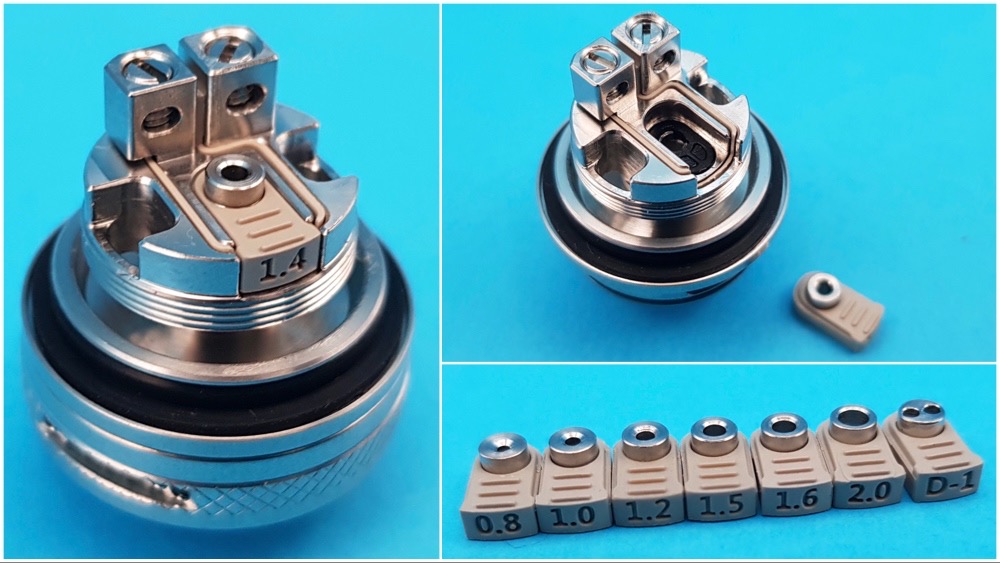 The BSKR mini V2 RTA is a 22mm diameter RTA, a size favoured by many MTL vapers. It’s not overly tall either at just 34.7mm excluding the 510 and drip tip. It’s quite a minimal, fuss free design but I appreciate the additional knurling on the top cap and afc which aid in grip and nicely break up the flow of the tank.

Filling is easy with the top cap coming off with just a quarter of a turn to reveal two fairly large fill ports which have rubber gaskets to prevent leaks should you tip things over whilst filling.

The airflow control ring at the base allows you to fine tune your vape, although realistically most of the adjustment is actually achieved with the use of the airflow inserts. This was initially quite stiff but loosened off quite quickly in use and can additionally be removed for cleaning.

The bell cap has a slight dome on the inside to enhance flavour.

On the base, the 510 pin protrudes 0.6mm and has a large peak insulator surrounding it so I would consider this to be a mech safe design. 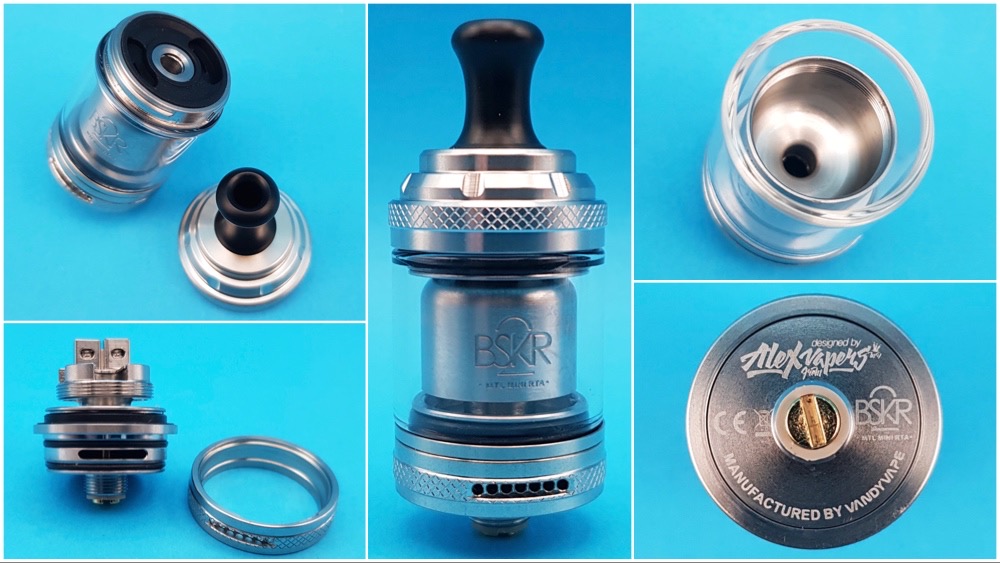 I decided not to use the included Vandy Vape MTL fused claptons as these are Ni80 and are unsuitable for me due to my nickel sensitivity. I really wish manufacturers would stop packing in Ni80 coils with tanks, especially as Vandy Vape also offer superfine claptons in both ss316 and KA1 (kanthal). If you’re reading this Vandy Vape, please pack in KA1 coils in future as these cause the least problems for those of us with metal sensitivity problems! 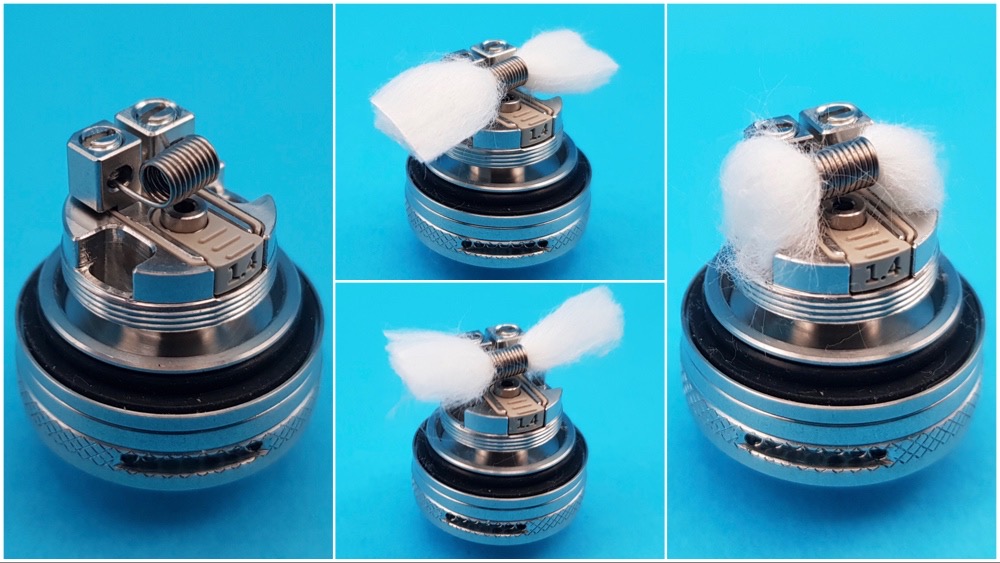 As the included coils weren’t an option, I went for my default 2.5mm KA1 round wire build coming out at 0.8 ohms. Installation was a breeze with the legs getting captured first time even using the included blue Barbie screwdriver. There’s sufficient room around the back to easily clip the leads as well. Obviously you want to try and get the centre of your coil directly over the airflow here and raise things up a little to make sure you clear the metal airflow tube.

Wicking was relatively straightforward. I cut the wick in line with the outside edge of the rta but as the coil sits quite a way above the raised gta style wicking ports, I suspected that this is going to rely on capillary action so I combed the ends of the wicks out a bit before tucking them into the wicking ports. This turned out to be the right decision as I’ve had no leaks and it’s been wicking perfectly.

As my BSKR mini V2 RTA was supplied in stainless steel (also available in matte black, gold and gunmetal), I decided it was quite a nice match for my kizoku Kirin semi-mech in 18350 mode, very swish!

With the default 1.4mm airflow in place, it wasn’t quite hitting the spot for me. From past experience I know that I prefer a looser 1.6mm draw and those removable airflow inserts meant I could leave my current build in place. This was much more to my liking with a rich flavourful vape. Intrigued by the dual 1mm insert, I decided to give that a whirl and although it was good, I soon reverted to my default 1.6mm draw but that’s the beauty of this design, you can swap around to suit your needs easily.

Vandy Vape have continually updated the BSKR line of RTAs over the last couple of years and this latest BSKR mini V2 is a worthy addition to the lineup. With it’s relatively low mass market price and all the packed in extras,  this is a great value rta if you’ve always wanted to try out a MTL RTA, and the large number of included airflow inserts means that you should be able to find the vape that suits you best.

Many thanks to Healthcabin for sending out the BSKR mini V2 RTA for review. Finally I’d like to quickly remind you that you need to be logged in to your Healthcabin account to see the best prices. 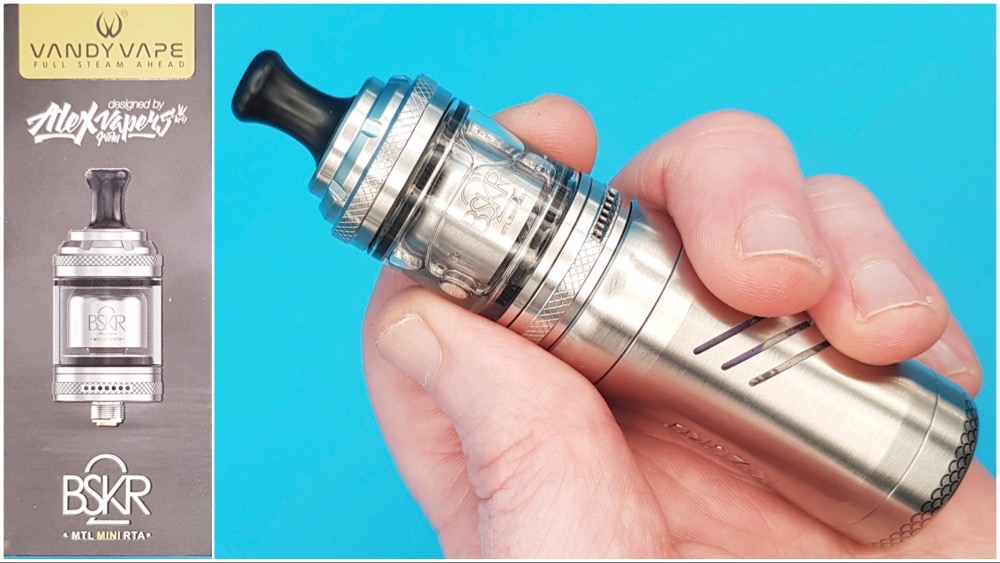