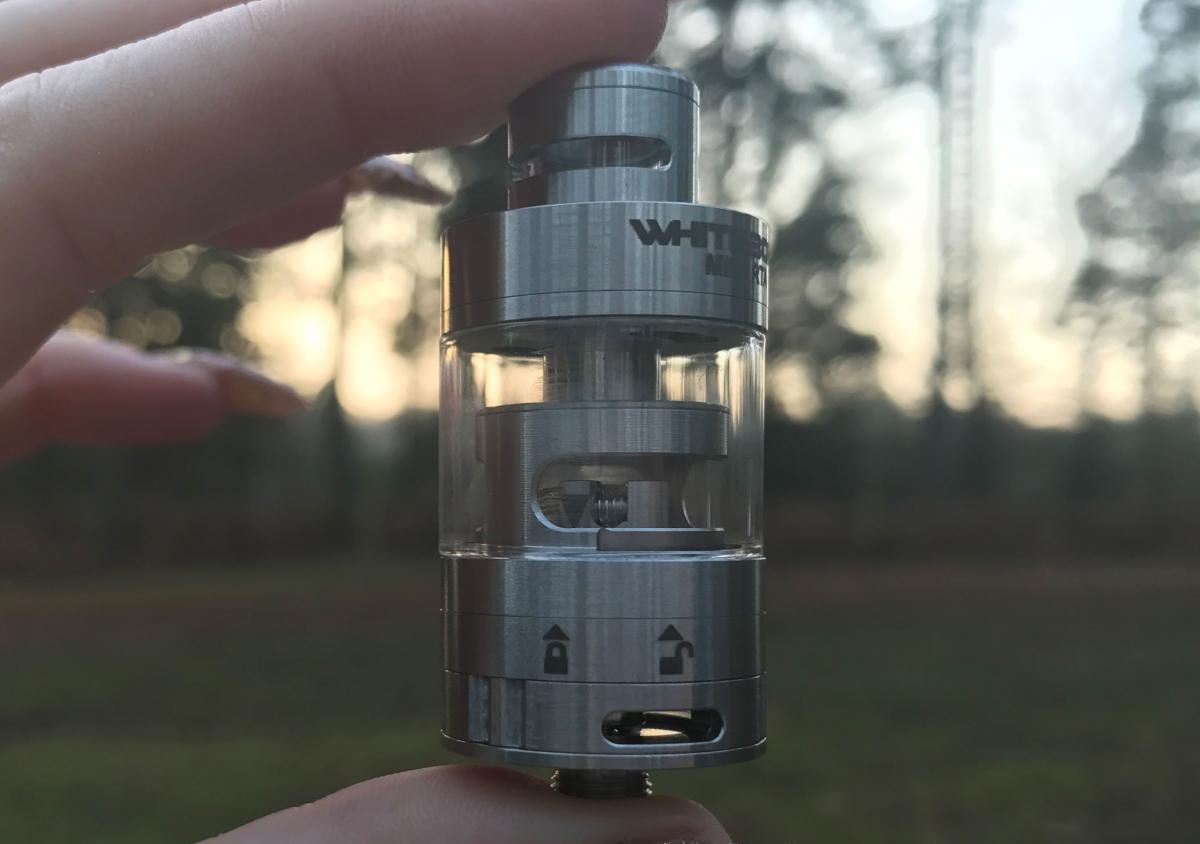 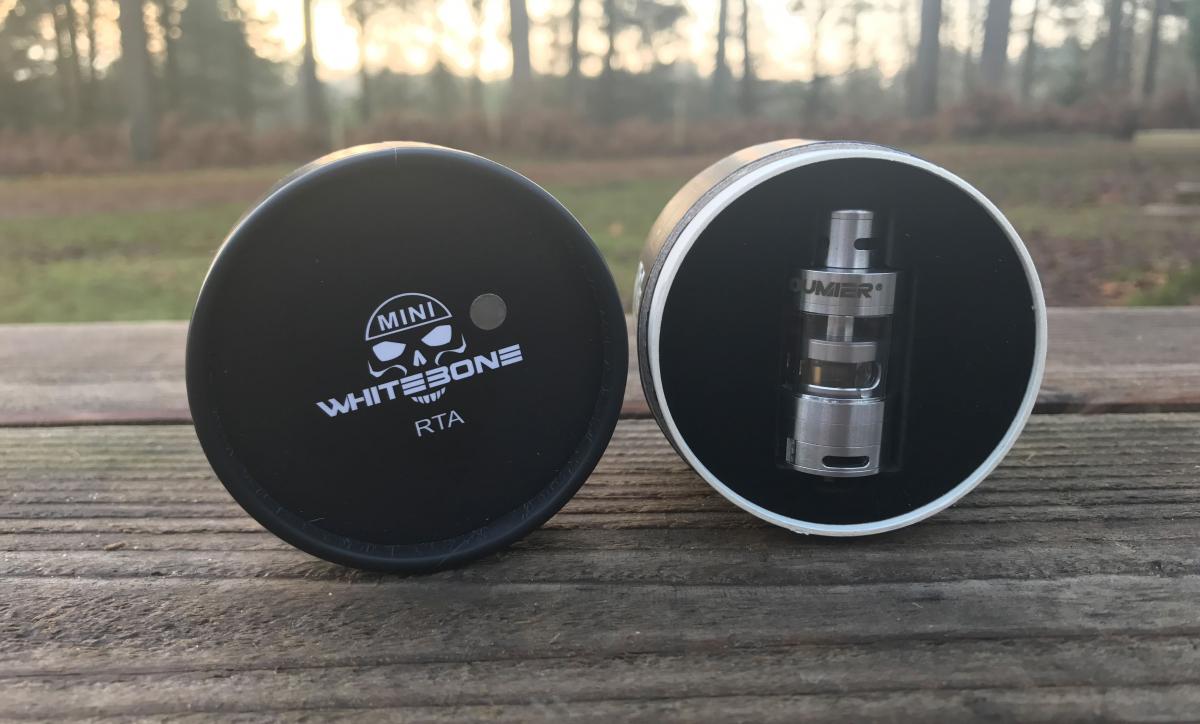 Measuring with a 22mm width and a 45mm height, the Oumier Whitebone Mini RTA is certainly a dinky little RTA! It’s manufactured from 316L stainless steel, with a solid pyrex glass tank section. You do get a spare glass tank section included within the box which will come in handy if you manage to damage the exisiting one. I was pleasantly surprised with how well made this tank was, everything fitted together nicely and threading is buttery smooth.

You have a 2.5ml capacity which is filled through the two large ports at the top of the tank, you can gain access to these by rotating the tank until the small arrow on the post points to the locked symbol, this will mean your juice flow control is closed, you then unscrew the top cap to reveal the fill ports. Once filled, you replace the top cap and rotate the tank to the unlocked symbol, which opens the juice flow back up ready for use.

The removable drip tip at the top features a stainless steel outer with pyrex glass insulation on the inside which helps to disperse heat, and if this drip tip isn’t to your fancy you can remove it and replace it with your own 510 threaded one. At the base of the tank you have an adjustable 510 connector, with a gold plated pin. 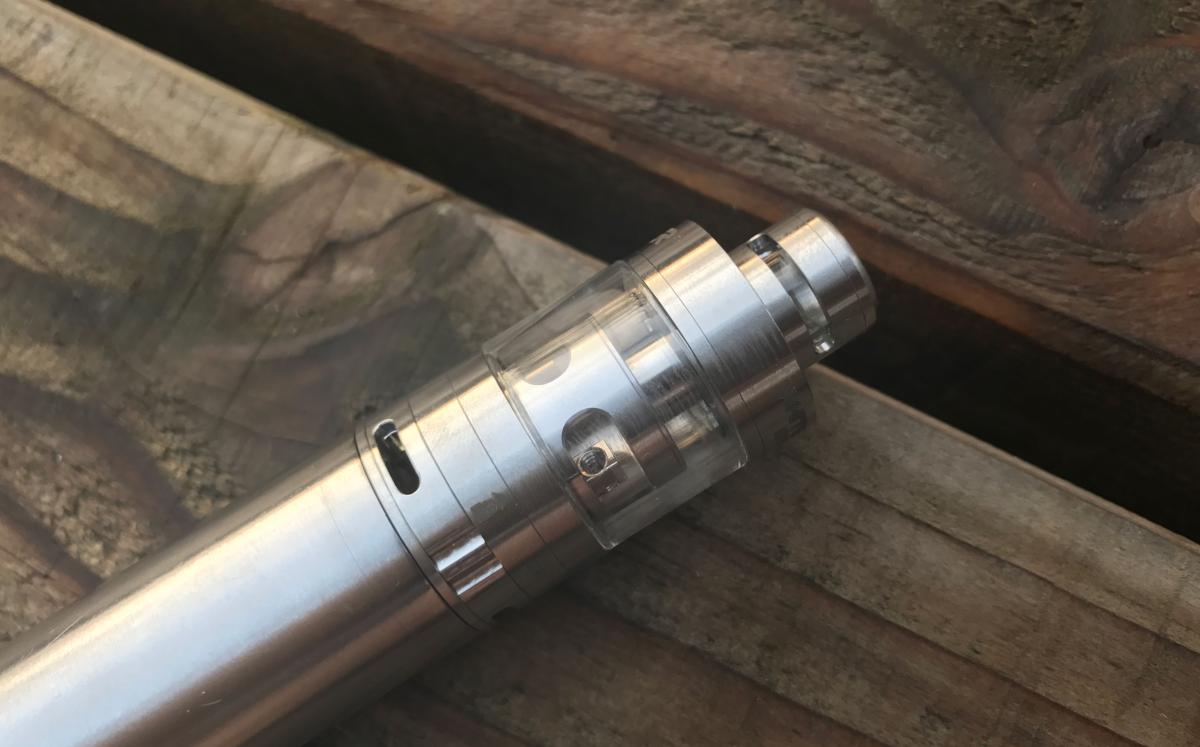 Airflow is drawn into the Oumier Whitebone Mini RTA through the base of the tank, and there are three large adjustable airflow intakes around the base of the tank. Wide open this tank offers you a lot of airflow, and plenty of vapour as a result, I did manage to achieve a mouth to lung draw by virtually closing off all three airflow intakes however it was still a loose one at that. I can’t have any complaints about the airflow control ring itself, it’s very smooth indeed and easy to use. 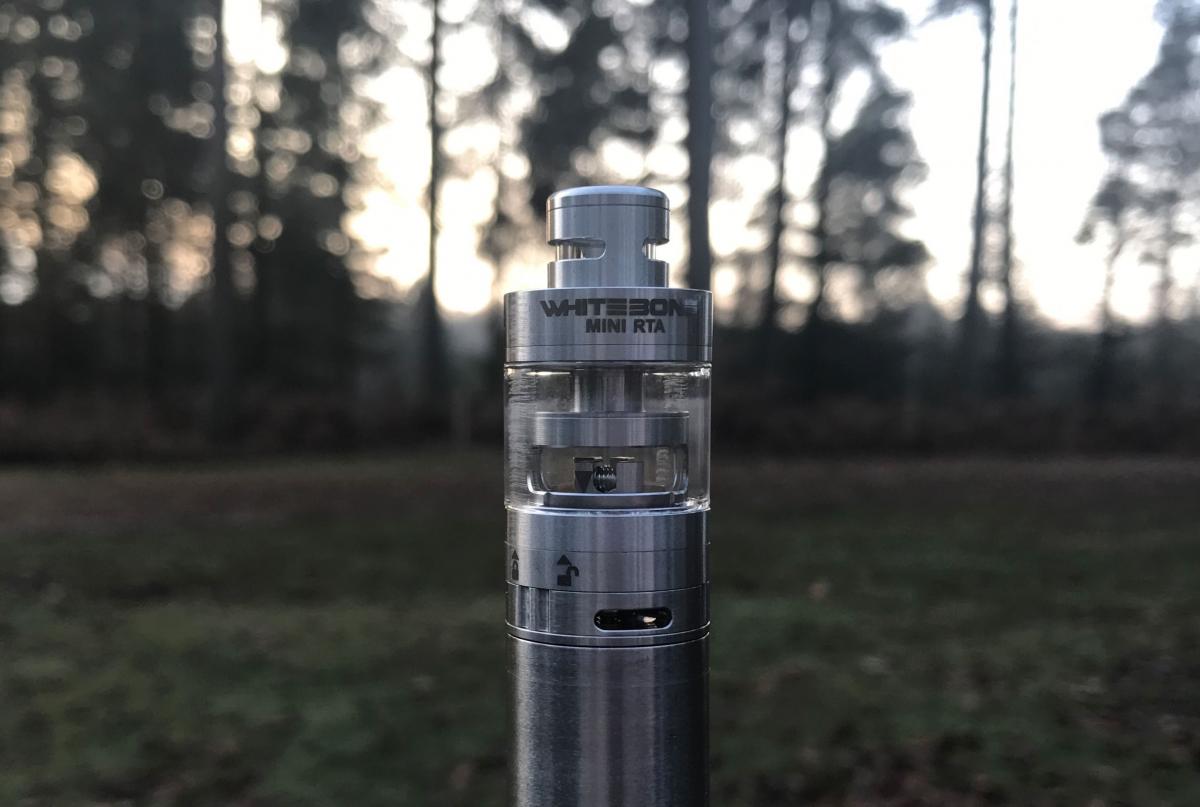 The Oumier Whitebone Mini RTA features a two post single coil RTA deck that is similar in design to the one found on the Wotofo Serpent Mini RTA. There’s quite a fair amount of room to build here, and reasonably large coils will fit just fine. I’ve been using one of the pre built SS/Kanthal Clapton coils from UD, which have a 3mm diameter, and this coil fit in just fine.

The positive post features gold plating in order to aid conductivity, and there are grub screws present on both posts to clamp your coil legs down with. A large airflow hole is present centrally on the deck, and you’ll want to ensure your coil is positioned over this. Two large wick slots are present at either end of the deck for you to place your wick tails into.

All in all, it’s a pretty simple RTA to build, you just need to pay particular attention to how you wick it. Too little wick will result in catastrophic leaking, and stuffing too much down those wicking holes will result in nasty dry hits. You just need to ensure your wick tails are covering these holes and placed into the top of them, and the Oumier Whitebone RTA will function just fine. 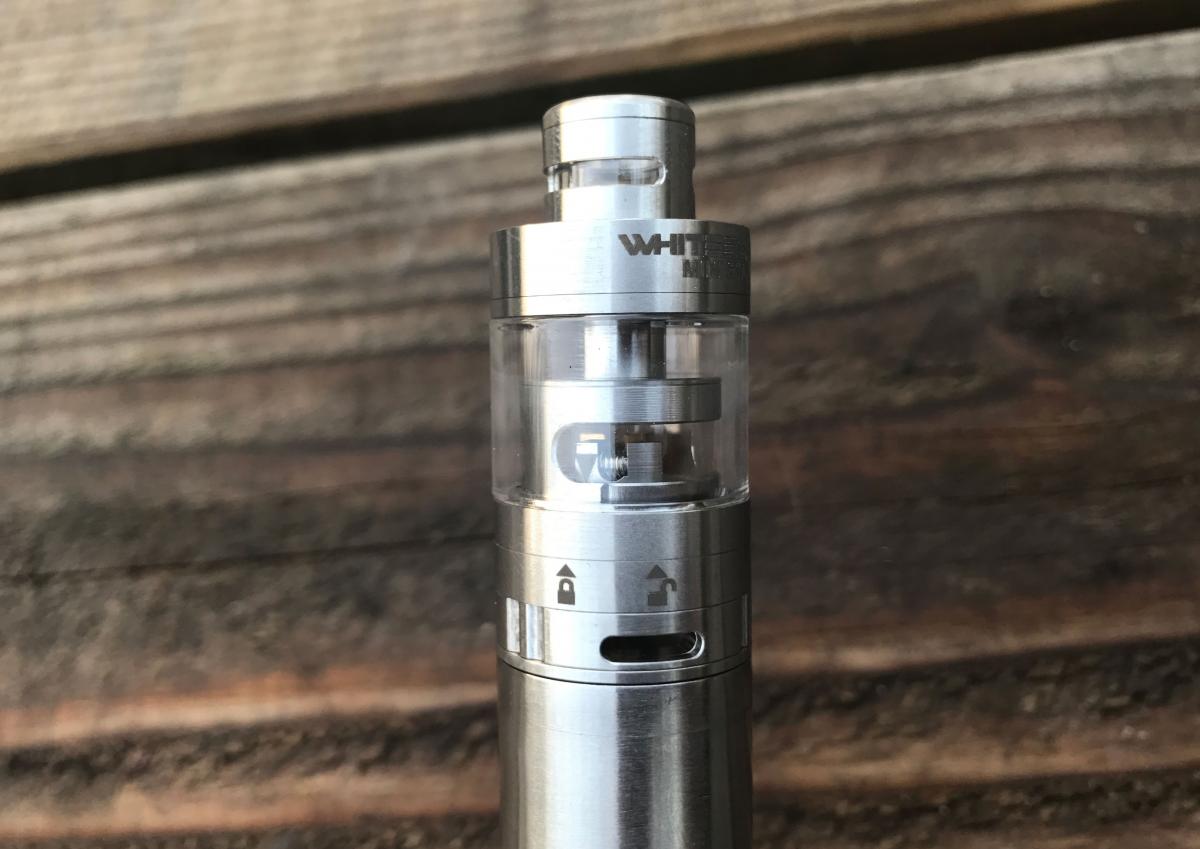 As mentioned above, I have been primarily using a pre built 0.5ohm SS/Kanthal Clapton coil from UD wicked with Kendo Vape Cotton Gold Edition, so my impressions on how this tank performs are based around that.

Flavour wise, I’ve got to say the results I have got from this tank have been very impressive indeed, I’d go as far as saying it performs as well as the Serpent Mini RTA on this front, of which I own two of. I got the best results from my 0.5ohm coil at the 37.5W-42W range, and a pretty rich and flavoursome vape was found. At the price range it is available for, it’s certainly one of the better budget flavour RTA’s I have tried recently.

When it comes to vapour, this isn’t designed as a cloud chasers tank, however it can certainly hold its own in that department. The three large airflow intakes seem to provide more vapour than the Serpent Mini RTA, even with the same build and wattage setting, and you can get a very impressive amount of vapour from this tank. You’ll start to lose a bit of flavour with the airflow set wide open, however closing it down to just over half still provides you with a decent level of vapour and great vapour.

The 2.5ml capacity is going to need refilling regularly, as this is one thirsty tank indeed. I’ve managed to drain the entire capacity in under an hour vaping heavily at 45W, but it does wick extremely well. I’ve had up to 100% VG juice, with the thick Kind Juice range, and it performed admirably well wicking it with ease. The tank doesn’t get overly hot either vaping at high wattage, which is a bonus. 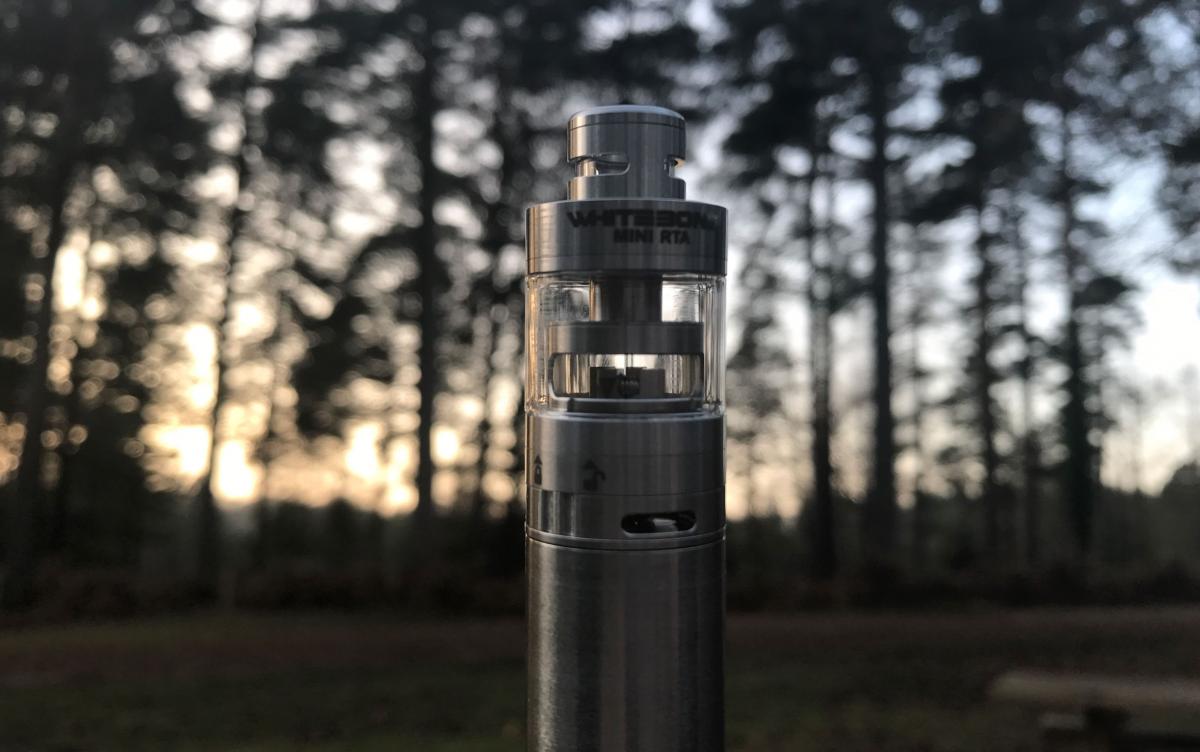 The Oumier Whitebone Mini RTA is certainly a very impressive little performer for the price, it’s a compact and well designed RTA that offers some very pleasing performance which belies its budget price tag. All in all I was very pleased with how this mini RTA performs, and it’s a great little option if you are looking for a new cheap rebuildable.