Another 'bought with my own money' review and build advice tips.

The best single coil RTA I have tried to date, easy to build and great flavour, highly recommended – 8.5/10 rating! 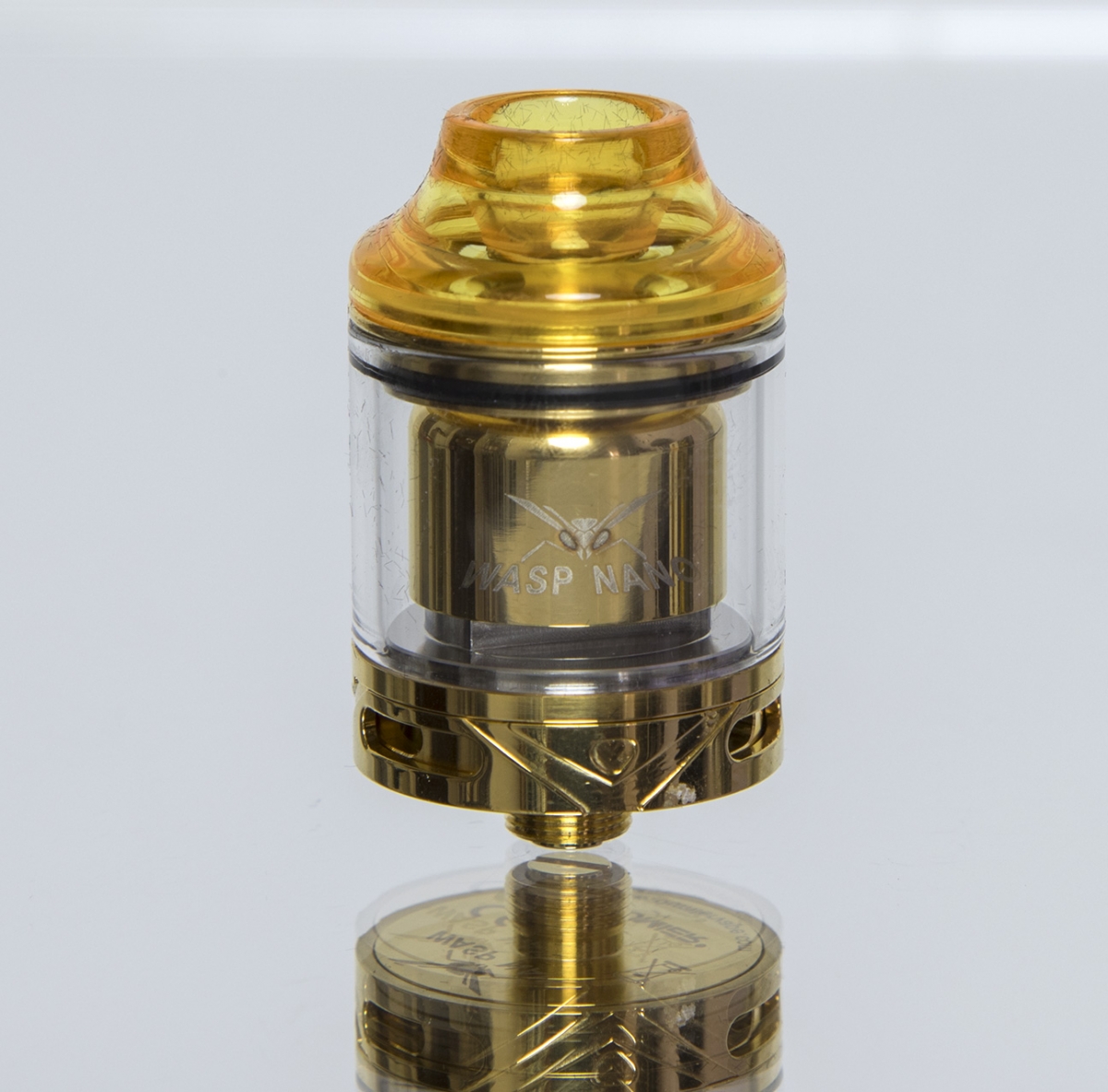 The usual RTA contents and nothing noteworthy, but includes everything you need to get started. 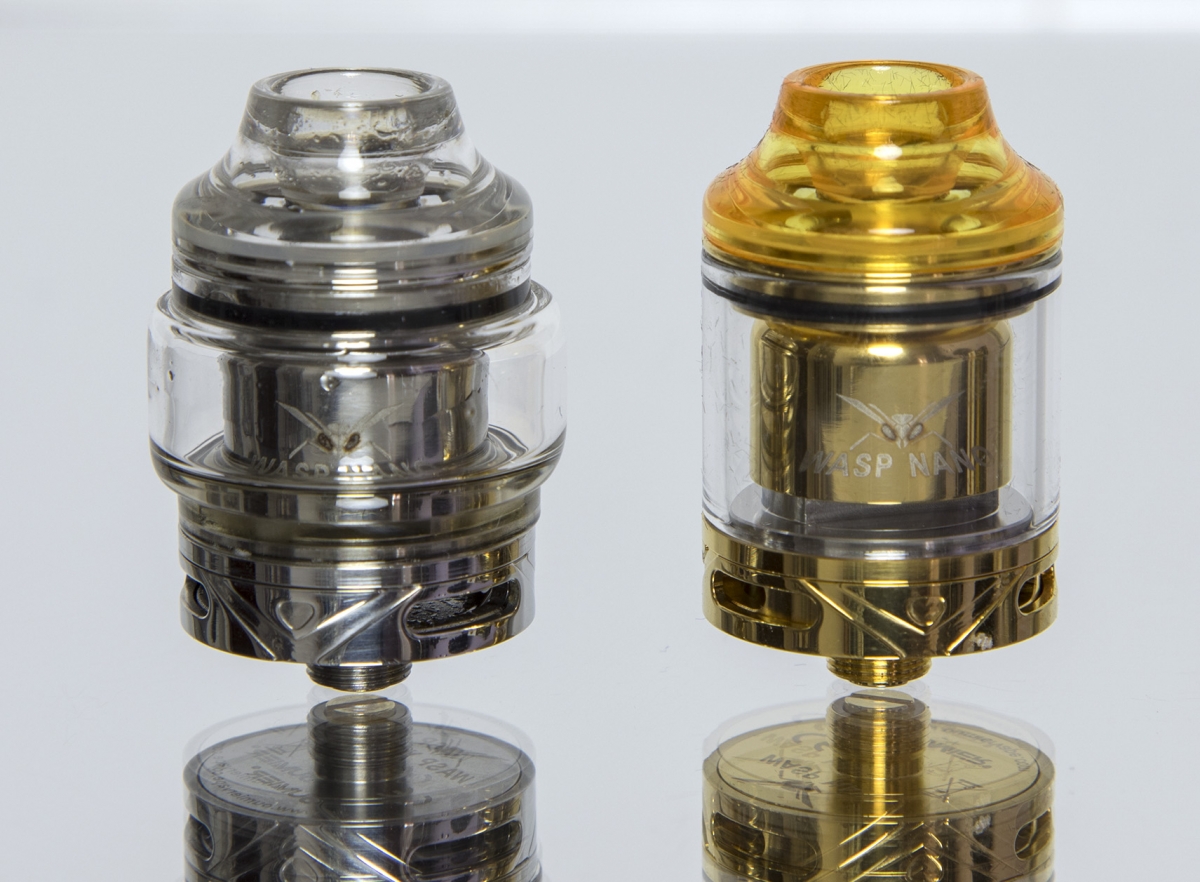 The RTA strips down simply by unscrewing everything, all feels good quality and not too many parts. 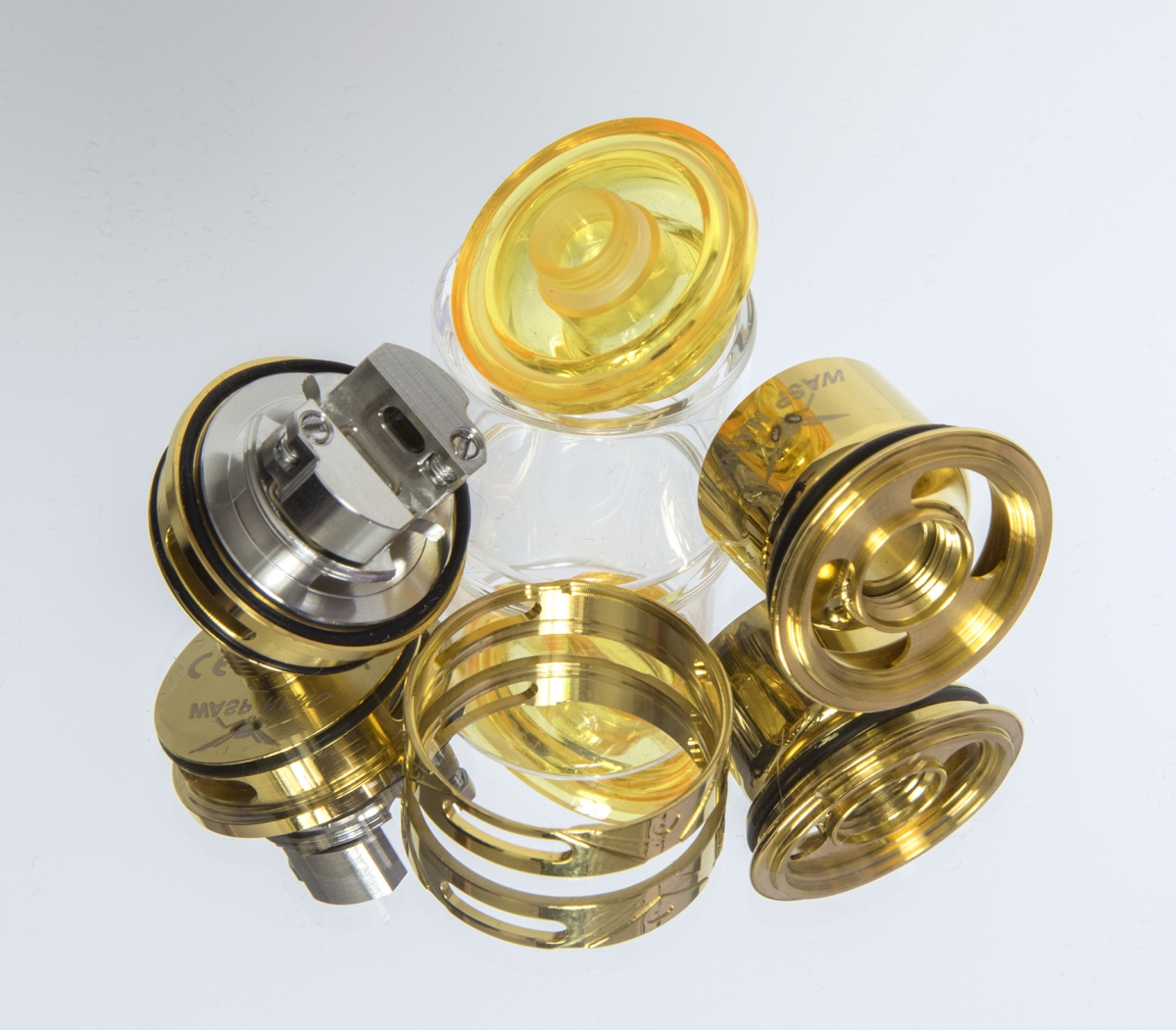 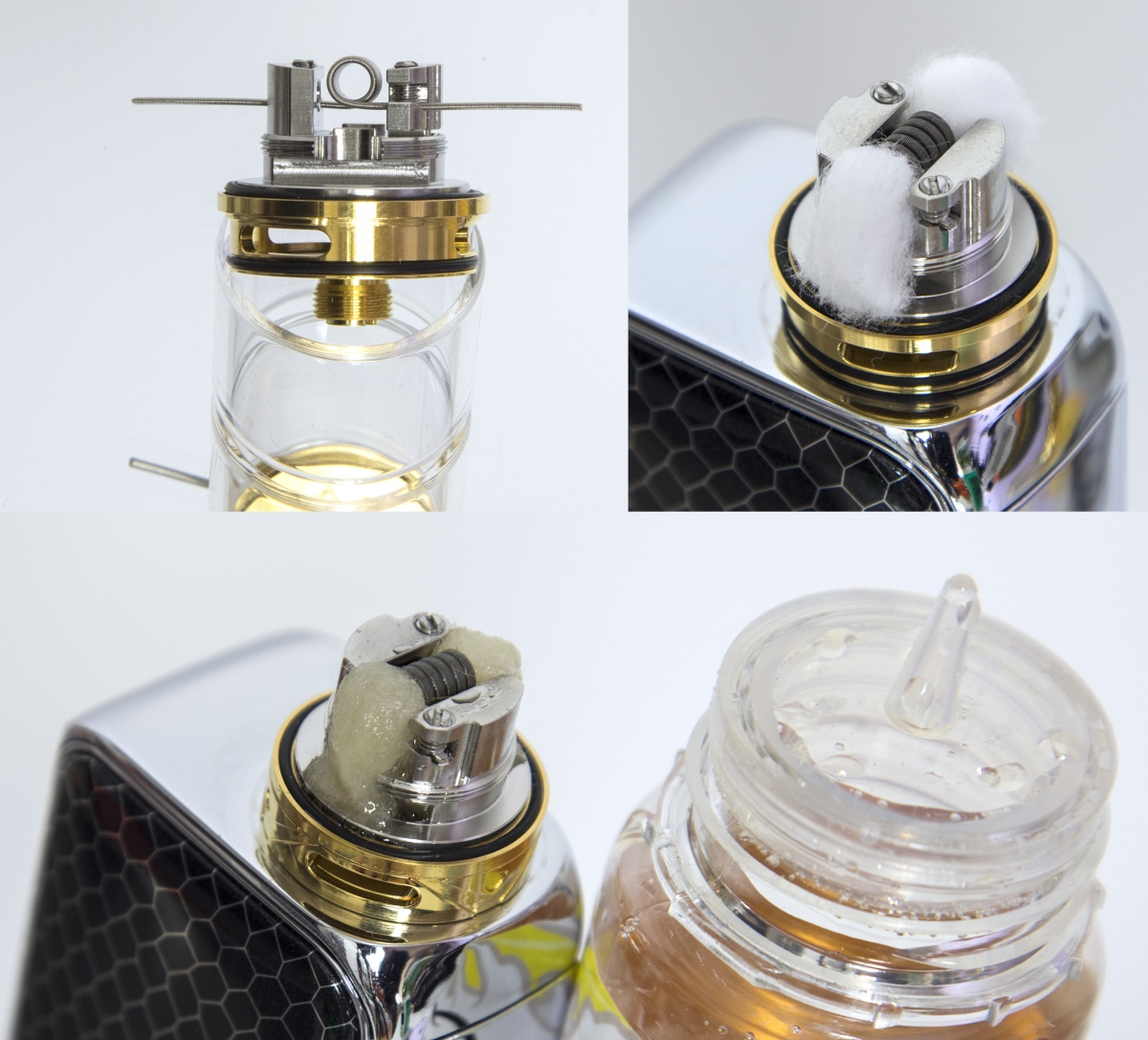 There are 2 screws that hold the coil in recesses that guide it’s position, using a coil rod (3mm dia) position it central with the legs at the bottom, nip up the screws and tweak the position as photographed, tighten up the screws and tweak again if required, then cut the excess legs as close as possible to avoid catching the chimney section, no need to space the coil, dry burn around 20 watts and strum out any hotspots.

Using the provided cotton, peel a strip suitable for 3mm diameter and pre roll it, squeeze roll the end and pull it through the coil (not too tight – not too loose), there are 2 wick notches, legs should just touch the base, trim to length then it’s best to prime by pulsing while dripping juice onto the coil until the legs are saturated, then position them into the channels so they won’t snag on the chimney, that’s pretty much it, assemble, fill and it’s ready to vape.

There are 2 ways to fill this RTA, the intended 2ml top fill method and the hidden gem bottom fill hack, detailed below. 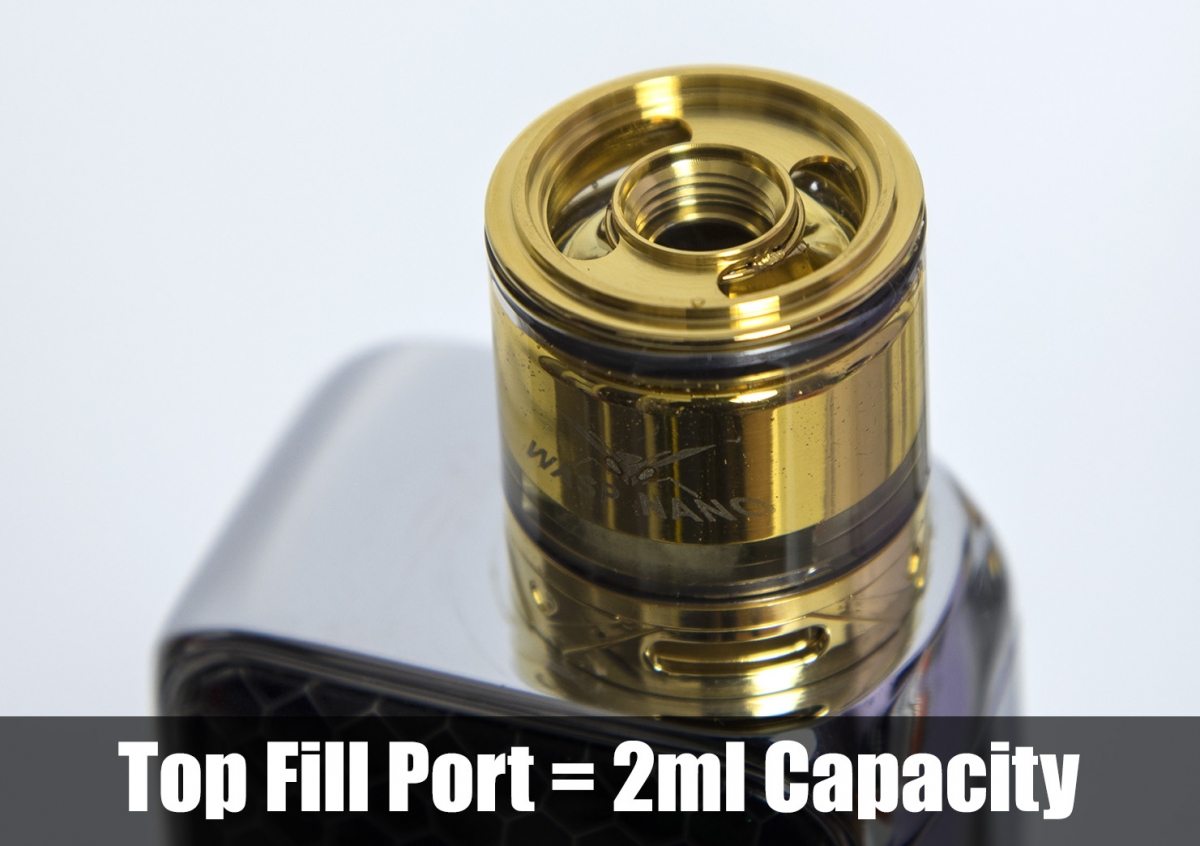 Now for the MAGIC! 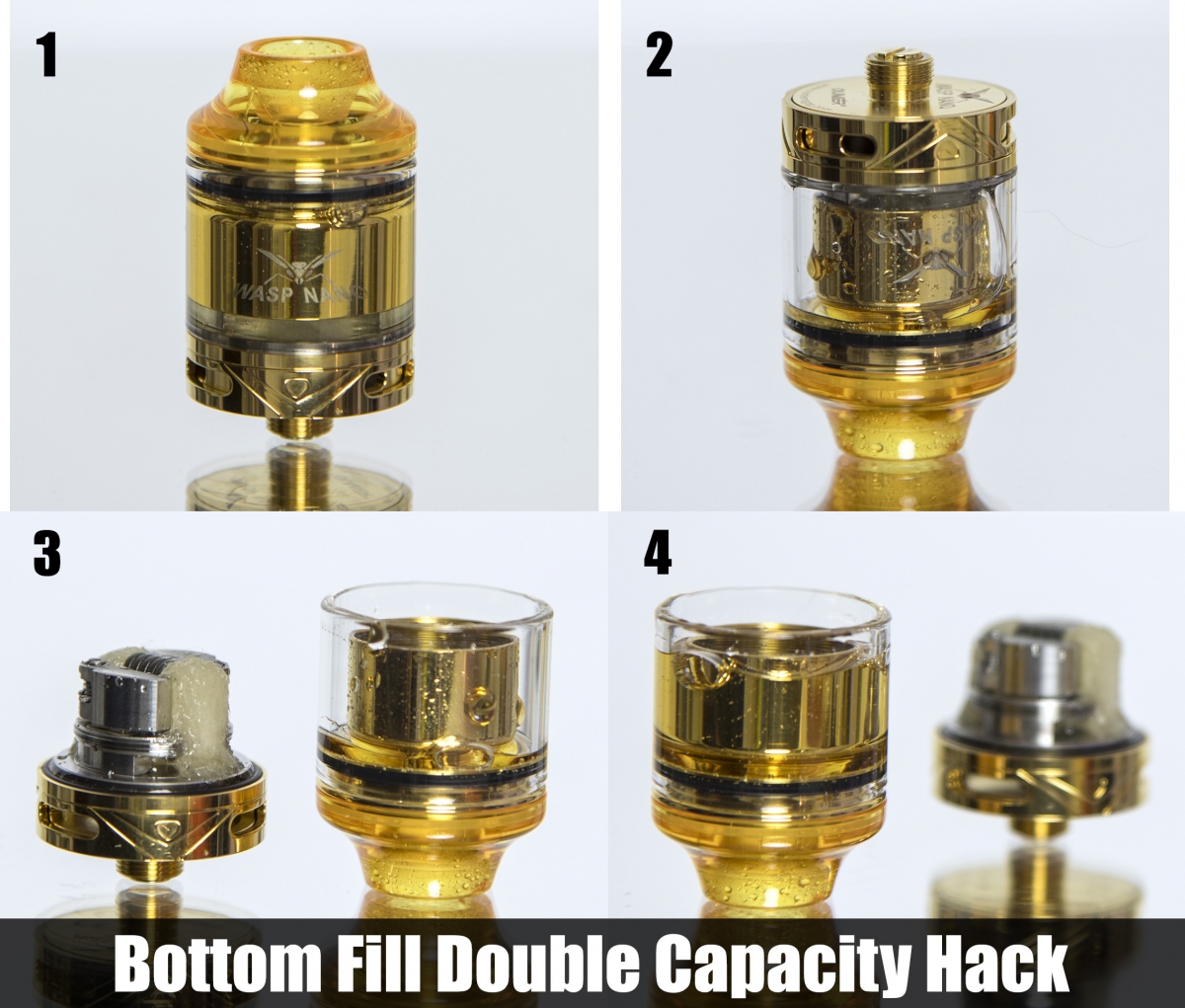 To increase juice capacity even further, a bubble glass is available separately which adds another 1.5ml (ish) so even better.

With its little brother, the Wasp RDA I was expecting a similar vape, as much as I liked the RDA it was prone to spitting like a camel, fortunately the RTA doesn’t suffer from this problem, though it shares its top profile I think they should have called it something else, people who didn’t get on with the Wasp RDA might be put off by its name which is a shame as it’s in another class.

I originally bought the Silver / Clear version which I much prefer to the Gold and it’s easier to partner up with a variety of mods, it is visually basic yet stylish, little touches really add to its appeal, even the eyes on the Wasp etching are darkened, same on the base, the airflow ring has an embossed pattern and is nice and easy to adjust, at first I was a little miffed you couldn’t put a drip tip on but now I understand why it’s a huge pro instead of a con.

Building and wicking is simple and forgiving, a shame they don’t list the supplied coil material but I will likely be using SS316L in it so I can use Temp Control.

In the current era of Mesh stock coils and Squonk RDA’s I’ve lost interest in RTA’s but the flavour and smooth vape you get from this tank is absolutely top draw, it can never be as good as something like a stock mesh coil in the Freemax Mesh Pro for example but it’s a really nice vape in its own right, a decent low powered DTL draw and smooth flavour impressed me a lot.

The vape you get from it is superb, the only spit back I get is when I re-wick for the first few hits then it settles down nicely, the juice flow keeps up nicely when chain vaping, you can see its bubbles rising with each draw instantly, I’m not into clouds but for those who like their clouds this produces plenty of vapour. 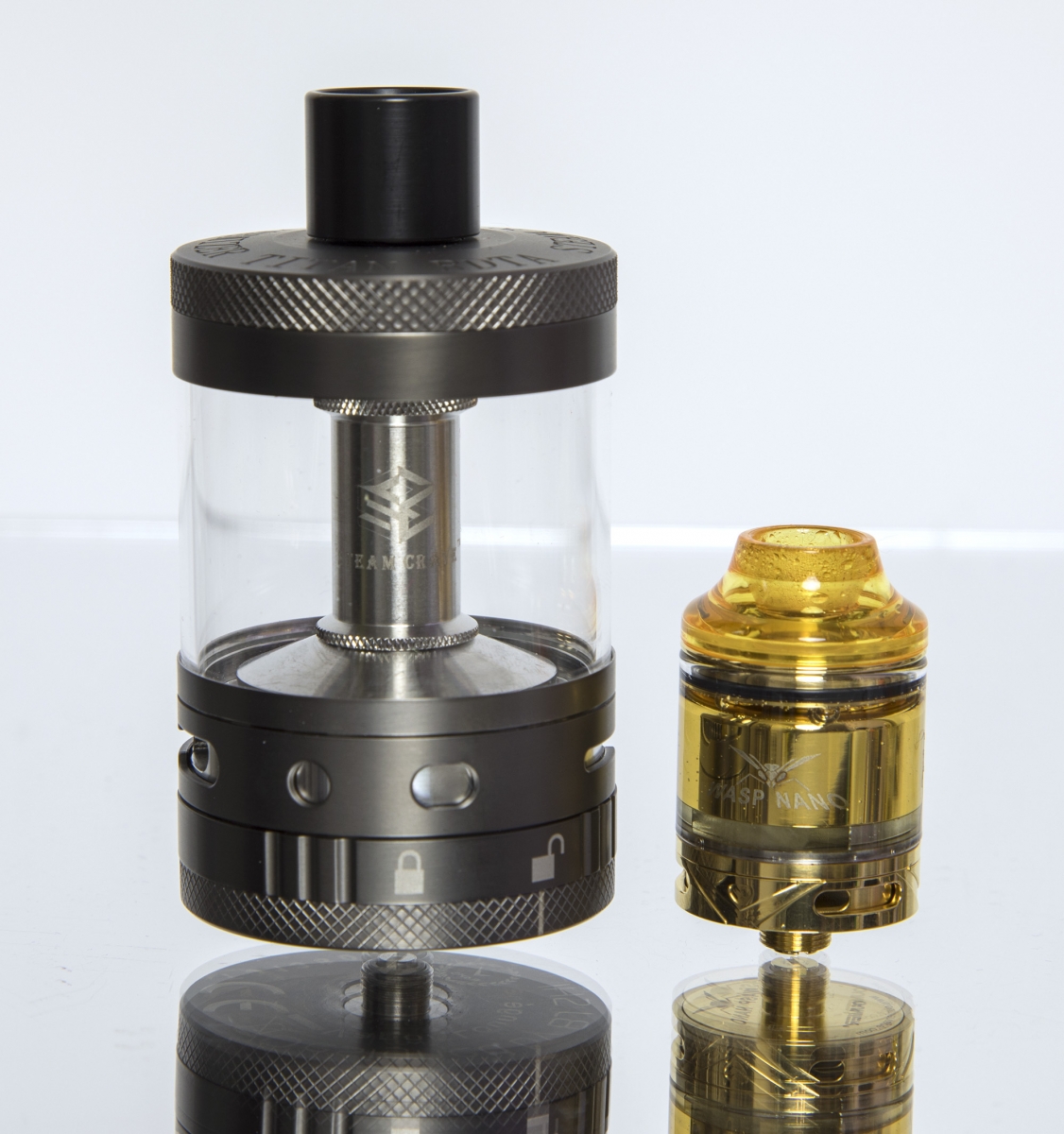 Only kidding, I couldn’t resist :p 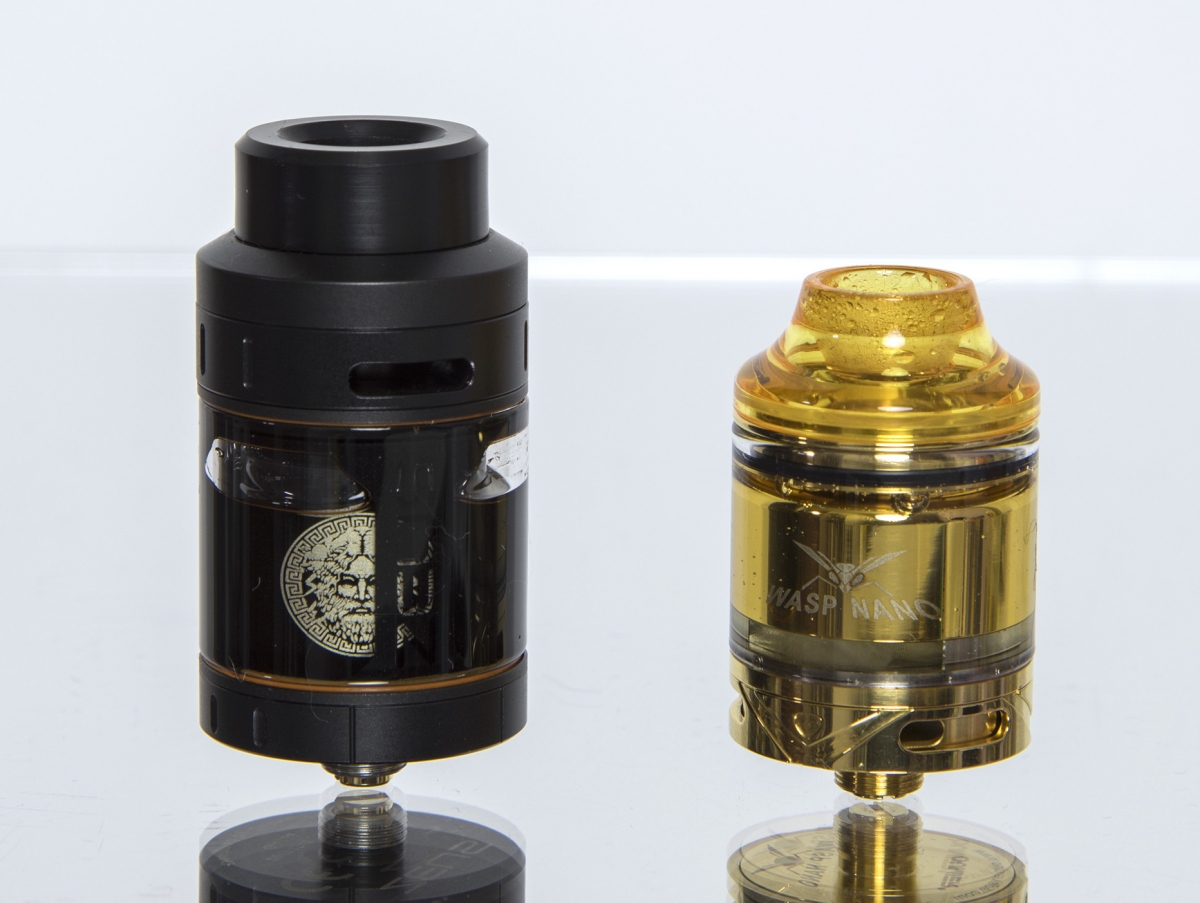 The only single DTL RTA I’ve highly rated and still use, is the closest I can compare to, though the Wasp does punch above its weight with some dual coil RTA’s I own.

The Zeus is a superb RTA and in theory should be better than the Wasp, it’s top airflow and larger diameter build deck delivered what I thought was the best flavour from a single coil atty, but the Wasp out performs it, the lower profile is a factor as the vapour has less distance from the coil, the top airflow on the Zeus made it near leak proof yet the Wasp hasn’t leaked at all in the month I have been using it, the Zeus has a wide bore drip tip that can be changed whereas the Wasp is fixed (reasons for that as above), also the Zeus is far more fiddly to strip down and build on.

Bottom line is the Wasp Nano RTA wins in the most important areas: Flavour, Capacity, Ease of build and looks better in my opinion.

I have plenty of other single coil RTA’s but they are MTL (Mouth To Lung) so not worth comparing them, though the Nano can be used as an MTL atty it’s best used as a DTL (Direct To Lung) tank.

Having read back through my review it’s clear to see I cannot fault this superb RTA, I think Oumier should have come up with a new name as it’s a totally different vape to the original Wasp RDA.

Oumier have some great attys and often innovative, they really do their research and this release is one of their best, its simplistic contemporary design is visually pleasing and doesn’t look out of place on most mods I have used it on, though the 23mm diameter is a little odd so it slightly overhangs on 22mm mods. 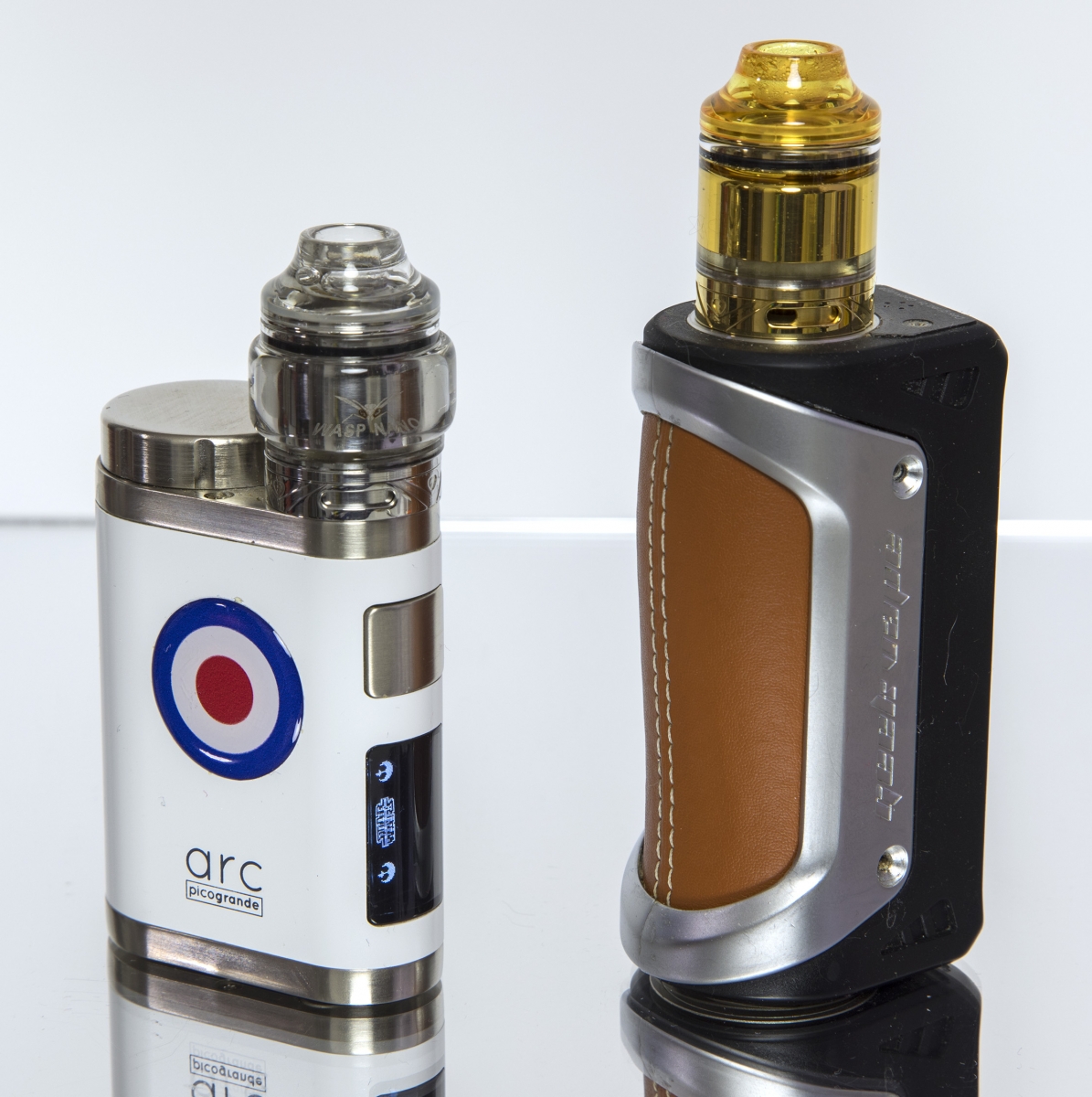 Its main strength for me is its performance and flavour delivery at the lower power range, with the included coil I’m vaping it at 33.3 Watts (yeah OCD!) so it’s a win win, battery lasts longer, juice lasts longer and with its increased capacity it’s a great choice to last the day out and about.

The Wasp Nano RTA has got me back into RTA’s, though it can never compete with the current generation of stock mesh coils it still provides a different enough vape experience to belong in my daily vape collection. 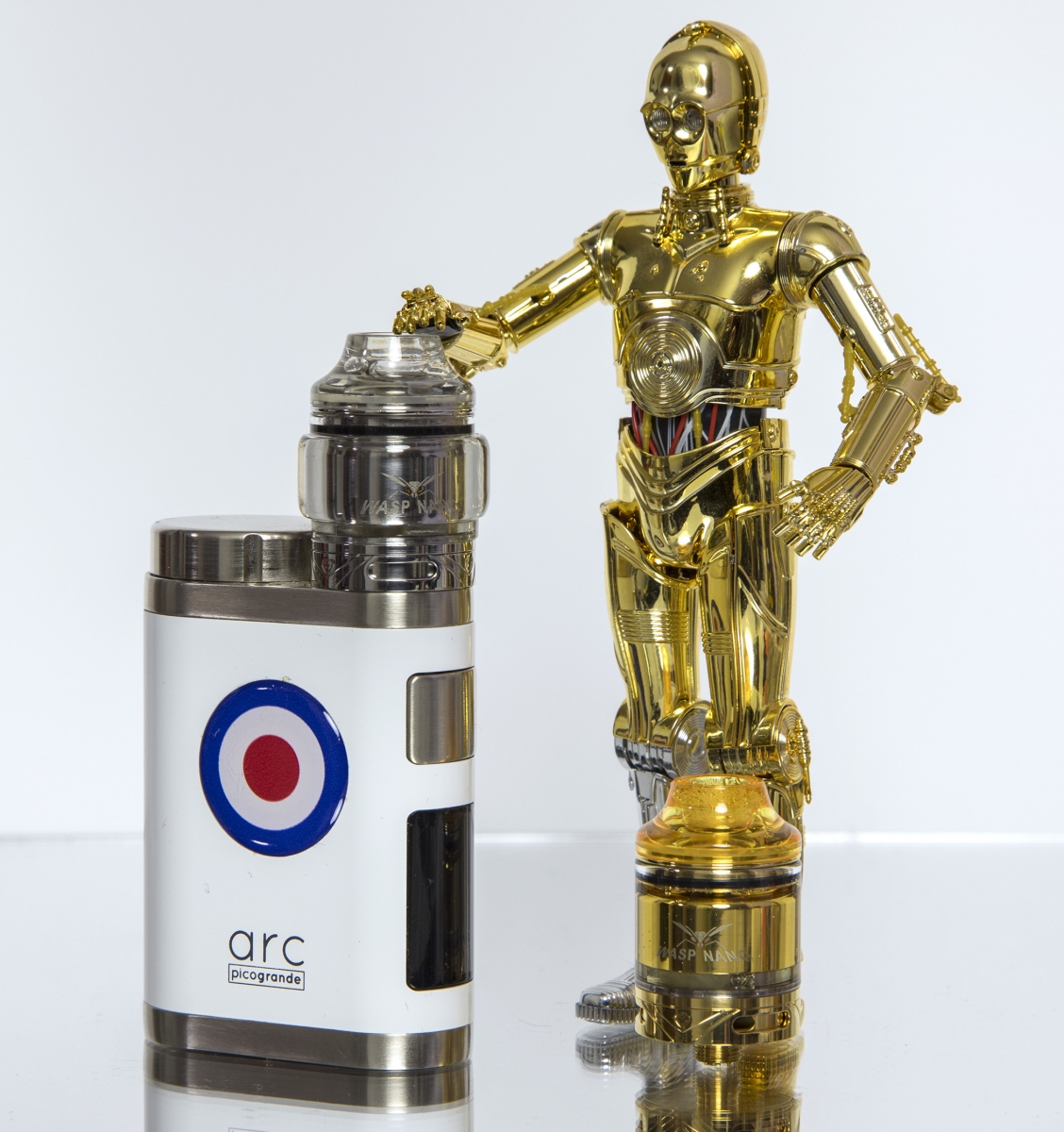 I thought the days of traditional RTA’s were over for me since I favoured Squonking RDA’s and latest tech Mesh Style stock coil tanks, this little Wasp has won me back into using an RTA on a regular basis, don’t expect it to beat Mesh for flavour but it’s close to RDA’s and a different enough vape to add to your collection if you fancy a change, I highly recommend this RTA.