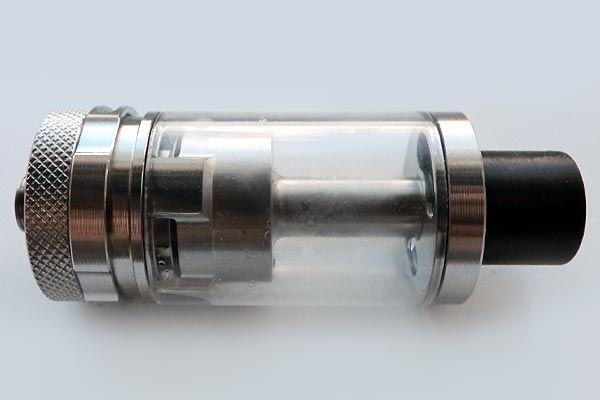 The Moradin by iCloudCig is a 22mm diameter RTA that requires a dual coil build. It features a ceramic chamber designed to maximise flavour. The tank holds either 3ml or 5ml of juice depending which version you purchase and has fully adjustable airflow, juice flow control and top filling. 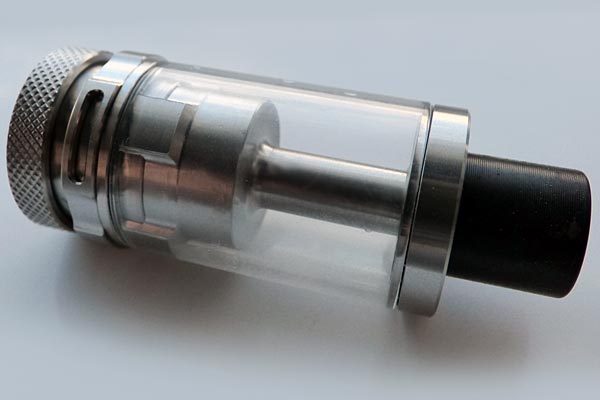 The Moradin is on the whole a well machined RTA. The Stainless Steel finish looks attractive and the tank is quite streamlined. The individual parts fit together well apart from the airflow adjustment ring that is a little stiff to adjust. The main section of the tank sadly cannot be completely disassembled and while it doesn’t actually present a problem when cleaning it is important to be careful with it since if you break it you will need a new tank. The glass is a little thin and I think it could have been a little thicker in my opinion.

The tank holds 5ml of juice and there is also a shorter 3ml version available. The Delrin drip tip and top cap are machined as one piece so this means you will not be able to use your own drip tips. The drip tip is of the large wide bore variety and it feels comfortable on the lips when vaping. Unscrewing the drip tip/top cap allows you to quickly fit the tank and I since the threading on the cap is really good it can be quickly refilled.

The deck uses a two post design but only has two post holes unlike a lot of other RTA’s that use Velocity style decks with four post holes. The bottom of the chamber is made of ceramic and this is fitted into the Stainless Steel base. The ceramic has four juice flow slots that hold your cotton wicking.

The 510 pin is made from copper so should get excellent conductivity. 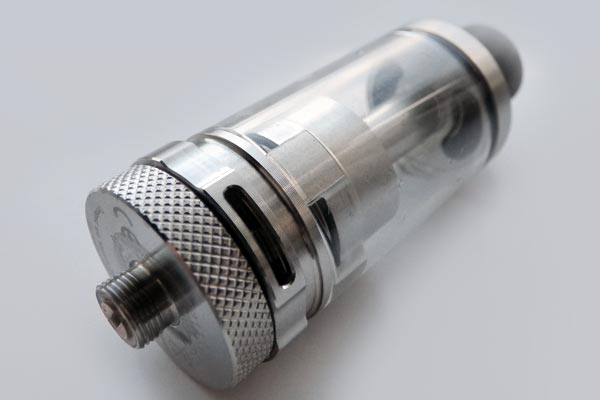 The Moradin airflow consists of two horizontal “Cyclops” style slots that can be opened up or closed down by rotating the adjustment ring. The ring itself is quite stiff to adjust and ideally could have been smoother. In addition by pushing the adjustment ring up you can fully close down the airflow when you want to refill the tank. While the airflow slots are not exactly massive you do still get quite an airy draw when vaping and the wide bore drip tip also contributes to that.

According to the specifications the Moradin does feature a juice flow control system but in reality it is less than ideal. The juice flow is adjusted by moving the airflow control ring up or down and this opens or closes off the juice channels. The problem of course is rather obvious since it also reduces the amount of airflow you get as a result. To be honest I always closed it down for filling and fully opened it up before vaping and I had no issues using high VG E-Liquid in this tank.

The deck is reasonably spacious and you can certainly fit dual Clapton coils in there if you wish. The Moradin has two posts which each have a single post hole. This means that you need to fit the legs of both coils through the holes before tightening down the screws. It can be a little fiddly if you are used to “Velocity” style four post hole decks. The screws work well and do not cut the wire. One thing to be mindful of is when cutting you coil legs make sure to be careful not to catch the ceramic chamber with you scissors or wire cutters since it is more fragile than a typical deck.

When wicking the Moradin I advise you to use plenty of cotton and to make sure it is pushed neatly down into the juice channels. If you have use too little cotton this tank will leak like a sieve.

Filling is easy and you simply close down the airflow and unscrew the top cap/drip tip. There is a large amount of room for your juice bottle nozzles, droppers etc. It is also a good idea not to completely fill the tank to the top. 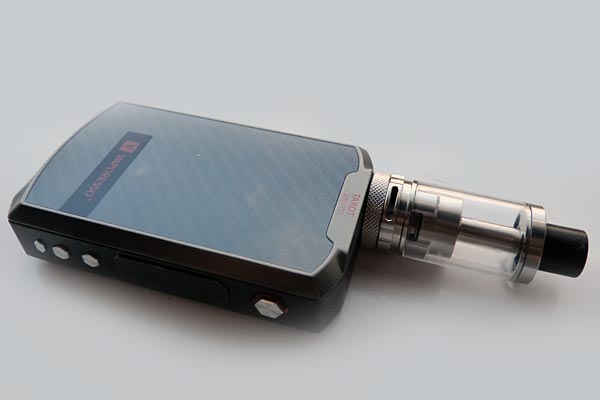 I built the Moradin using the two coils that came in the package and they had a final Resistance of 0.25ohm. I then wicked the coils with Japanese cotton and filled up the tank with some Manabush Mojave Dessert (Apricot Flavoured Juice). I started vaping at 45 Watts and I got a very dense and highly flavoursome vape. I pushed the Wattage to 60W and I had no problems with dry hits but the vape did get very hot for me so I went back down to 45W. Depending on your build you could possibly go as high as 80 Watts with this tank but it might get far too hot since the airflow slots are not particularly large. One nice thing about this tank is that I did not notice any issues with spit back.

The airflow does make quite a wheezy noise when inhaling but you quickly get used to it. Vapour production was great and like I said very dense with hot flavoursome clouds quickly fogging up my room!

The 5ml capacity really does help when you are using low Resistance builds since while the juice drains fairly fast vape you aren’t constantly having to refill it.

After vaping all of the juice in the tank I then built the Moradin with a dual Clapton coil build which had a final Resistance of 0.5ohm. I wicked the coils and filled up the tank with some Nerdy E-Liquid Green Apple Peach. Vaping with this set up I got even better flavour and in my opinion the Moradin suits Clapton builds extremely well.

I really enjoyed the vape I got from this tank and if I were to compare it to a similar product such as the Vaporesso Gemini which I reviewed recently and really liked I would say that the Moradin is distinctly more flavoursome due to the ceramic chamber. In terms of vapour production they are similar to each other but the Moradin produces much denser clouds. The Gemini does have an easier to use deck for rebuildable newcomers and the fact that the tank can also be broken down fully for cleaning is another advantage. The Gemini also has an airier draw but the Moradin is still rather airy.

Regardless of which one of these dual coil tanks ends up as my current favourite the Moradin will certainly serve you well and I don’t think you will be disappointed!

The Moradin is an excellent RTA that will suit anyone that wants a flavoursome vape combined with excellent vapour production. The ceramic chamber really does help to maximise the flavour but you do need to take care when building since it is more fragile than some other RTA’s. Not using enough wicking can also lead to some heavy leaking so do keep that in mind.

Minor cons are the all in one drip tip and top cap as well as the machined main section of the tank which means if you smash the glass you will need to buy a new one and the glass itself is quite thin so do take care. The deck may be slightly awkward for new users to get to grips with but since the post holes are reasonably large and the screws are of good quality it is less of an issue.

Personally I really liked this tank despite some of its cons and I think for the price it represents good value for money as long as you are careful with it. We purchased the Moradin from M-Vapes who sell both the 5ml and 3ml versions - so if you like the sound of it definitely pick one up!