Thanks to Heavengifts for sending this in for review. More details available here.

Following on from the Kizoku Limit, the Unlimit offers subohm stock coil or dual coil options in one package. Dual purpose tanks are not new with options for rebuildable decks being offered as addons, so how does the Unlimit measure up. Read on to find out.

The Kizoku Unlimit comes in a black sleeved box with an illustration of the tank and the name in silver foil lettering on the front, and the specifications, contents and company info on the rear. Remove the sleeve and the Unlimit is presented in a dense foam tray. Underneath this is a fold out manual, warranty card, bag of spare O rings, replacement tank, cotton wicks, air restrictor, spare screws, blue screwdriver, 0.15ohm mesh coil and an extension piece.

Breaking this down into its component parts, it was a relief to find that, unlike the Limit, this hadn’t been assembled by the Hulk so I was able to unscrew it easily. The threads were nice and smooth. Out of the box, it comes assembled in the RTA option which means the collar marked “REPLACEMENT COIL RTA” needs lifting up to release it from the base.

Taking this off reveals the juice cut off system that closes the juice flow channels. The RTA deck is postless, dual coil or possibly a largish single coil, and has bottom airflow. The grub screws are flathead, not the best but functional. The deck screws out of the base to allow for the fitting of the stock coil. As the RTA deck was already fitted, I popped a dual coil build in using the supplied coils. Not 100% what they are as there was no indication anywhere, but they measured at 0.17ohm. Cutting the legs at 6mm seemed a good place to start, and wicking was straightforward. Just be sure not to have too much wick in the smallish juice wells so as to prevent choking. Reassembly needs some care as the section with the lift ring can appear to be locked but then comes apart. Fitting the bubble glass for more capacity followed by the top section. Removing the top cap reveals two large fill ports, and if you want even more capacity, the extension piece can be added. As with the Limit, filling up is a little awkward as the glass section is quite shallow, but the larger fill ports do allow you to see the juice before it’s pouring down the sides. Refitting the top cap, and it was time to fire it up. The 810 delrin drip tip is a comfortable height and width, and is held in place by an O ring in the catch cup.

In RTA mode, you have two main airflow options, bottom, side, or a combination of the two. The control rings are smooth in action, although the bottom is a bit fiddly when it is sitting on a mod. I started at half shut on both and 60W. Upping the power and adjusting the airflow accordingly, I was soon at 90W without the vape being too hot but with so much airflow that the flavour was a little washed out. I soon found a very pleasing vape with bottom quarter open and fully open side airflow, and I was able to drop down to 85W. There is so much adjustment available that you’d be hard pushed not to find a personal sweet spot. Flavour was definitely better with side airflow as the bottom tended to rush between the coils. Bottom airflow would work better with a single 4mm+ coil and limited side air. The restrictor doesn’t really offer much as the adjustment is so customisable, but if you do chose to use it, I’d increase the leg length to around 7mm as it’s quite close to the coil at 6mm. Juice flow and wicking kept up fine, although I did need to rewick as when left for a few hours unused I had a little leakage. The juice cut off system worked well as it allowed me to access the deck whilst still having a half full tank, but invert the RTA before removing the base.

After running 4/5 tanks through, I swapped over to the supplied stock coil. Simply remove the RTA deck and screw in the coil. The lift up section isn’t used in this configuration so the glass now fits onto the base, and the top section seals the top of the coil. Fill up the same way as before and, after allowing the coil to prime, you’re all set to go. The coils are rated 70-80W, so I started at a conservative 60W. The coils wick fine so it’s not long before I got up to 80W but dropped it to 75W for a more comfortable vape. Flavour was spot on and there was plenty of vape if that’s your thing. Since opening this package up, I had been racking my brains as to why the coils looked familiar and it dawned on me! They are the same coils used in the Falcon Subohm tank so that is a bonus as there is a good range of coils compatible with the Unlimit.

The Kizoku Unlimit has been equally at home with either the stock coil or the RTA option. Airflow adjustment means you can dial in the vape you want very easily with the bottom/side options. Using Falcon coils means the subohm choices are great given how well the Falcon coils perform. Having reviewed the Limit, I wondered if this would fair better and I wasn’t disappointed. This was closer to my preferred style with the Limit being a restricted DTL/loose MTL vape. There’s lots to like about the Unlimit, very good build quality, great airflow options and a good vape.

The downsides for me were the ugly bubble glass and the vagueness of the lock system on the RTA section. It would be more comforting to feel it lock in place. Airflow isn’t over noisy but it’s there. Having such a short glass section and large metal sections, it does make filling fun but nowhere near as frustrating as the Limit.

Overall this has been a pleasure to use, good vape and very good flavour on either set up, helped by the compatibility with Falcon coils. For more info visit Heavengifts. 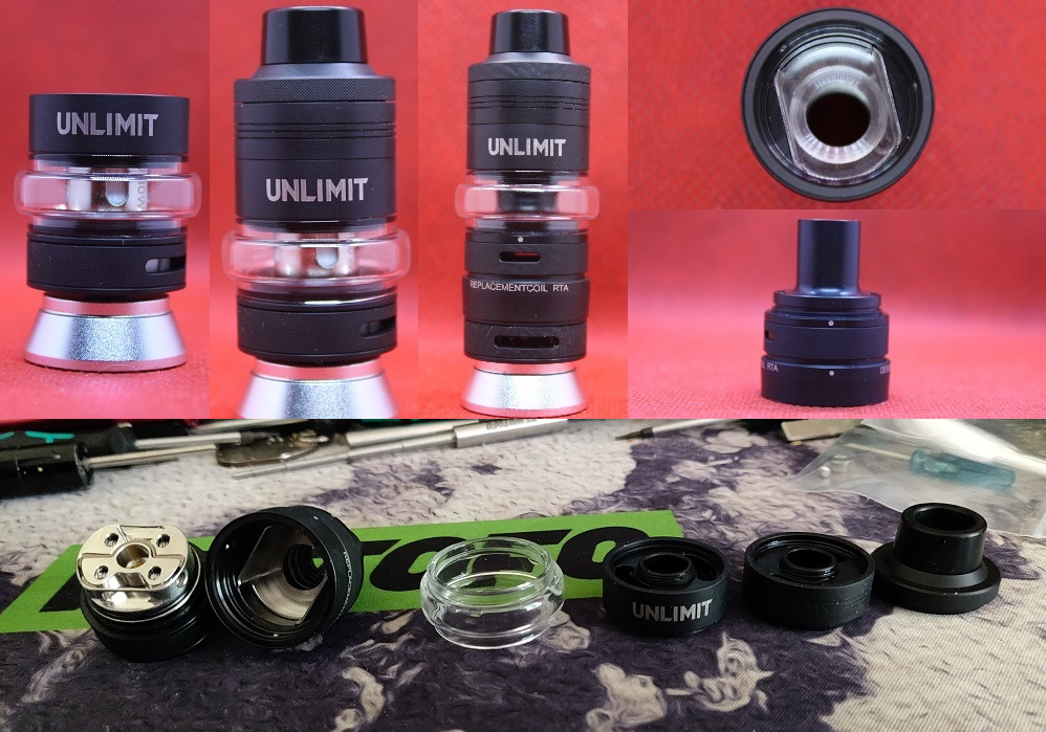