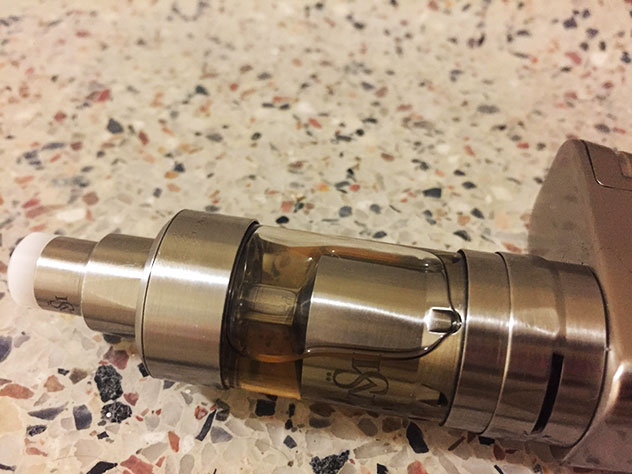 Quickly following on from the release of the very successful Kayfun Mini V3, an RTA widely lauded for its outstanding flavour, is the hugely anticipated Kayfun 5 from Svoemesto which is designed to be the first Kayfun to appeal to all sections of the market, from mouth to lung vapers through to direct lung inhalers. It offers the most airflow from a Kayfun to date, with the revised airflow control, revamped build deck and juice flow control offering compatibility with larger and more exotic coil types, and PEEK insulators allowing for lower resistance sub ohm builds to be used efficiently.

Stylized on the Kayfun Mini V3, the Kayfun 5 also offers the choice between a 4ml or 5ml tank capacity depending on whether the glass or steel tank section is used, a fully adjustable liquid control system, a user friendly top refilling system and the ability to access the build deck with juice in the tank section giving you the option to adjust your build on the fly as needed.

The Kayfun Mini V3 was a big success for the Svoemesto team, can the Kayfun 5 kick on from this and offer the best Kayfun experience to date?

Packaged in a small and stylish cardboard package emblazoned with the Svoemesto and Kayfun 5 logo, you’ll find the Kayfun 5 tank itself with the stainless steel tank section already fitted, and also included is a Quartz Glass tank section and a selection of spares too, such as post screws and o-ring seals. There is also a short and concise user manual included as well, which gives easy to follow instructions on how to setup and use your new Kayfun 5.

Straight away you will notice that looks wise, the Kayfun 5 definitely takes its design cues from the Kayfun Mini V3. It is however, much larger than the Kayfun Mini V3, the width has been increased to a standard 22mm and it is very tall indeed, measuring in at 60mm without accounting for the 510 threading or stock drip tip. It’s by no means the best looking tank around, and I am hoping for the release of a nano/mini kit in the future! 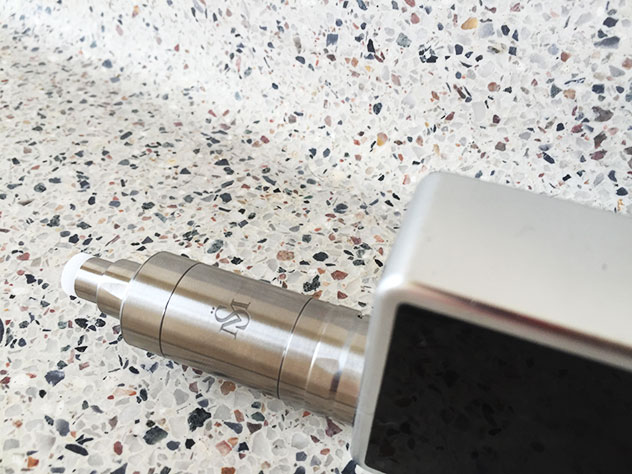 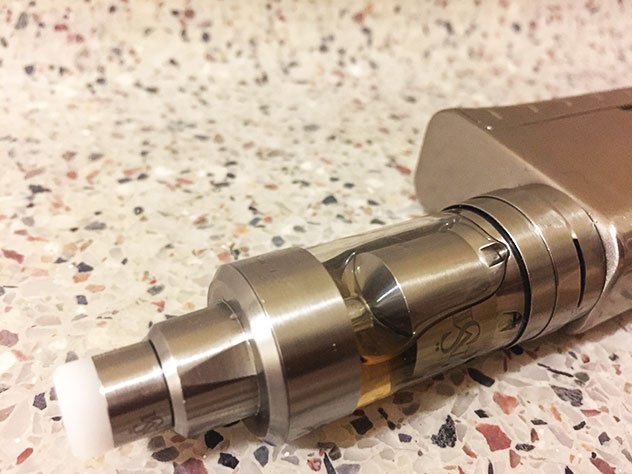 The base of the tank features the newly revised airflow control, which is ingenious and I will cover this in the separate Airflow section below. The Kayfun 5 features standard 510 threading, with an adjustable 510 pin as well. Width is 22mm which means you should be able to get a nice flush fit on your mod, and it does look very good when paired with a stainless steel 22mm width mechanical mod too!

My only grumble with the build quality of the Kayfun 5 is that when my Kayfun 5 arrived, the juice flow control was wedged to the base of the tank and I could not get access to the build deck at all as the tank section would not turn, despite trying various different methods. A quick email to Creme de Vape soon solved the issue however, and by using rubber bands fixed to the tank section and the base of the tank I managed to get enough leverage to get the tank section to turn and lift off, giving me access to the build deck. You must ensure you coat the o-rings beneath the build deck with a healthy layer of high VG before use, as this will prevent the juice flow control from becoming stuck to it.

There are an assortment of spares already available to purchase for the Kayfun 5, as well as add ons such as a mouth to lung airflow reducer kit for those that enjoy a very tight draw and a Steam Tuners Tower Kit which is a clear top filling bellcap for your Kayfun 5. 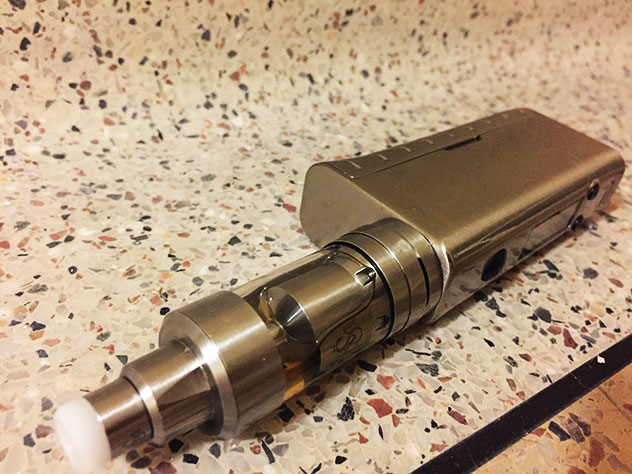 The two post Kayfun build deck is synonymous with vapers everywhere, it has been widely imitated due to how easy it is to build and get to grips with. The Kayfun 5 deck arguably is the easiest revision yet, and this time around larger post screws have been used alongside a cut out in the deck which allows you to use larger wire gauges and more exotic coil builds. Installation is extremely easy thanks to these small refinements, and it makes building on this deck an absolute breeze. I would even go as far as saying it is one of the easiest and most forgiving decks around to build on. PEEK insulators have also been used to give added protection against heat, and enable to Kayfun 5 to be compatible with sub ohm builds down to 0.5ohm. 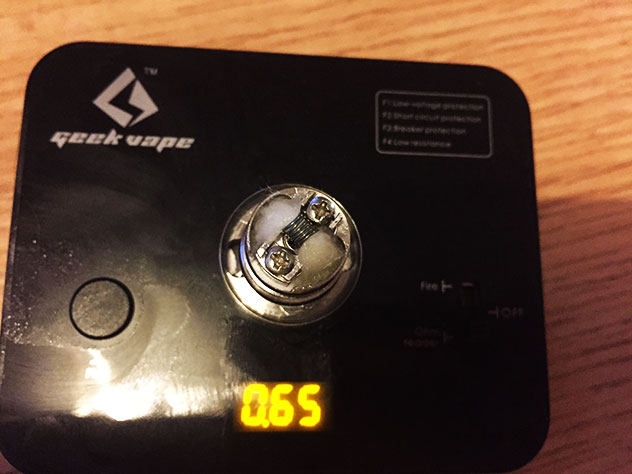 I’ve spent a fair bit of time with the Kayfun 5 over the past couple of weeks, testing various different builds from 1ohm+ mouth to lung builds right down to 0.5ohm sub ohm builds with large coils. It’s been a joy to build on, as with any Kayfun deck, and I personally have settled on a spaced 6 wrap, 2.5mm diameter coil with 0.4mm Stainless Steel 316L wire as my own favourite build, with the coil raised just above the airflow hole in the deck. I use Kendo Vape Cotton as my wick, I tear off a small strip and loosely roll it, before threading it through my coil, cutting the wick tails in line with the outer ring on the deck, and fluffing these up before using ceramic tweezers to lift the wick tails up and place these into the wicking slots. I’ve found this build to wick perfectly each and every time, and provide superlative flavour.

As a side note, Svoemesto themselves recommend that a minimum resistance of 0.5ohm and a wattage range of 10-40W is suitable for the Kayfun 5.

There have been grumblings from some Kayfun traditionalists that even on the tightest airflow setting, the Kayfun V5 is too airy for them. Svoemesto themselves explained that during their market research, they found that many Kayfun 4 users were opting to purchase the 4S kit for an airier draw and were still craving an even airier draw. In response to this, and the shift in the market towards airier sub ohm capable rebuildable tank atomisers, Svoemesto decided to incorporate their findings into the stock airflow options, to open up the Kayfun 5 to direct lung inhalers as well as traditional mouth to lung vapers. For those that do find the Kayfun 5 is still too airy for them with the stock airflow options, a MTL airflow reducer kit is available cheaply, and this consists of three plug inserts that individually slot into the airflow hole in the deck. Depending on which of the three plugs you decide to insert, the airflow will be reduced down to 1.2mm, 1.4mm or 1.6mm accordingly. 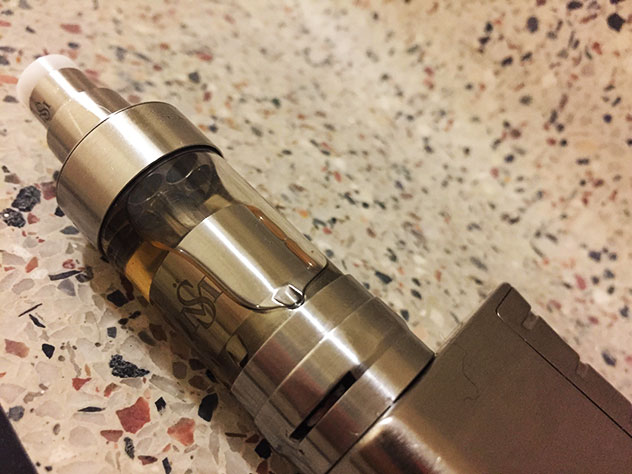 Traditionally, a Kayfun atomiser is geared towards delivering pure, outstanding flavour from your juices and there aren't many tanks out there that can beat a correctly set up Kayfun when it comes to this. The Kayfun 5 is no different, and I personally believe that is the most flavourful Kayfun to date, and one of the very best tanks out there at delivering pure flavour. It's an absolute joy to vape, performing exceedingly well no matter the type of juice used, and the revised liquid control system means that the Kayfun 5 can wick any juice ratio that you can throw at it, and also compensate for over/under wicking to prevent against dry hits and leaking. It really is a superb wicking and flavour machine, my favourite juices absolutely excelled in the Kayfun 5, with this becoming my favourite atomiser for one of my all time favourite juices, South Coast Vapes Callicustard! 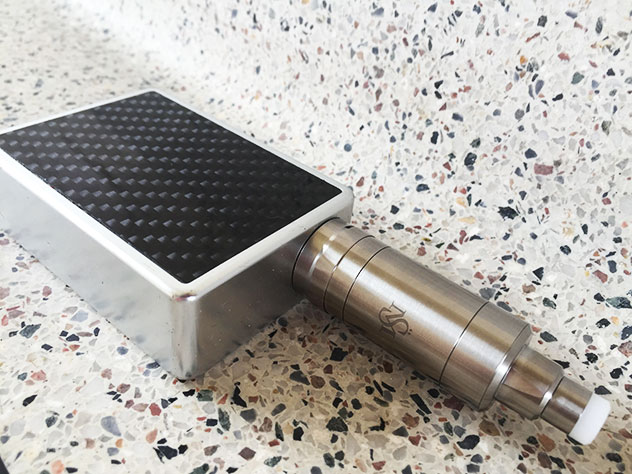 The style of draw has changed compared to previous Kayfuns. Previously, the way to get the very best from a Kayfun was to take long and slow deliberate draws, with chain vaping short draws frowned upon, however with the increased airflow and juice control you can chain vape on the Kayfun 5 to your hearts content without fear of dry hits or muted flavour. Shorter draws are still rewarded with top class flavour, and you no longer need to inhale as long as you would have with previous Kayfuns.

Of course, with increased airflow and the option of direct lung inhaling, the Kayfun 5 is now capable of some very impressive vapour production. At the 3.2mm airflow setting, there’s a very open draw for a Kayfun, and thick, dense clouds of vapour produced. It’s quite impressive stuff when you consider that Kayfuns have never really been known for their cloud chasing abilities before!

I was really impressed with the Kayfun Mini V3 when I reviewed this recently, however I couldn’t help but think what it would have been like with a slightly looser draw setting available. Thankfully, my prayers were answered with the release of the Kayfun 5, which offers a looser draw more suited to my own style and builds on the groundwork laid by the Kayfun Mini V3, with the trademark stellar flavour that you would expect from a Kayfun atomiser very much present and correct even with a more open draw. You’ll pick up flavour notes you didn’t even realise were there in your favourite juices, and a rich flavoursome vape that really does bring out the very best from your juice.

I’d say that the Kayfun 5 is a triumphant release from Svoemesto, and it opens up Kayfun’s to all sections of the market. The flavour you can get from the Kayfun 5 is nothing short of remarkable and I would rate it as one of the most flavourful tanks available today. It’s a big unit, but the build quality is rock solid as you would expect from a Kayfun, and the build deck rates as one of the easiest around to build on and wick. It’s a very forgiving rebuildable tank atomiser, that gives truly one of the best flavour experiences I have ever had from an atomiser.

My Kayfun 5 was purchased from www.cremedevape.com 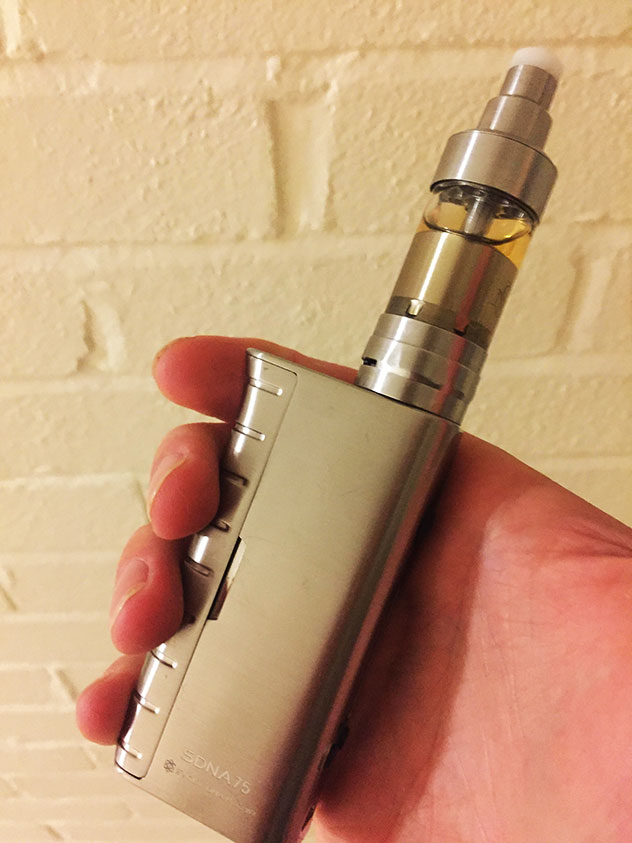