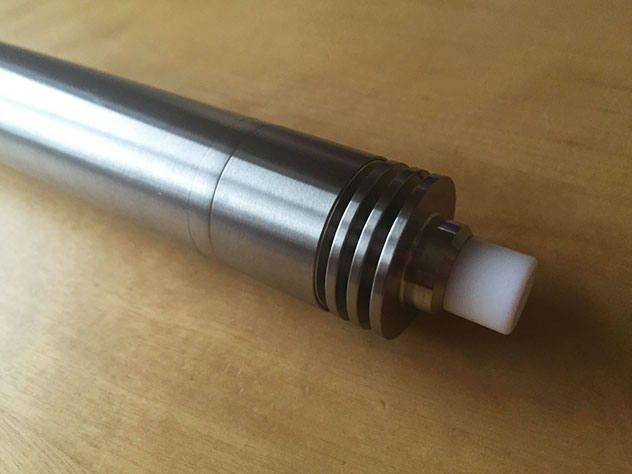 For those of you unfamiliar with Genesis tanks or Athea Mods in particular, Athea Mods are manufacturer based in France and founded by Vincent Athea, a highly respected French modder, and are responsible for the design and manufacture of the In'Ax series of Genesis atomisers. The In'Ax series of atomisers are highly sought after and extremely prized by their owners, due to the exceptional build quality, ease of use and the incredible vape provided.

There are numerous versions of the In'Ax Genesis, from small form versions such as the 16mm In'Ax 16 and 18mm In'Ax 18, to the 22mm In'Ax MKII and MKIIr. The latest version is the In’Ax MKIII, which was so popular on release day that websites stocking it struggled under the sheer demand for this highly prized atomiser. The In’Ax MKIII sports a revised airflow control system, new filling method that does away with the full plug, a negative ring for trapping down your coil leg easily, and the option of purchasing a new threaded post if you struggle with the trademark Grypsticks. It also features almost unparalleled build quality, manufactured from surgical grade stainless steel, laser engraved logo at the base and a tight PTFE insulator to prevent the post from spinning. You also have the option of purchasing a 5ml tank extender and clear tank section as well.

The In’Ax MKII and MKIIr were two of my favourite atomisers of all time, and I was very excited for the release of the MKIII. I picked one up from Vape Jam and have been playing with it and using it daily for near enough a month now, and here are my thoughts on the In’Ax MKIII...

There are additional extras you can purchase for the In’Ax MKIII. You can purchase a 5ml tank extender, which also increases the width of the tank to 28.5mm, a threaded positive post which can accept wire thicknesses up to 0.5mm and which will come in handy if you didn't get on with the Grypsticks, and you can also purchase a clear tank section made from Quadrant PC1000.

Flawless is pretty much the only way to sum up the design and manufacturing of the In’Ax MKIII. It's one of the most well built and finely machined atomisers you will ever come across. It's manufactured from 316L surgical grade stainless steel and you can tell a great deal of care and attention went into the making of this. The threading is spectacular and even the smallest, finest details are manufactured to perfection. It's a really stunning looking atomiser, one of the best looking out there. 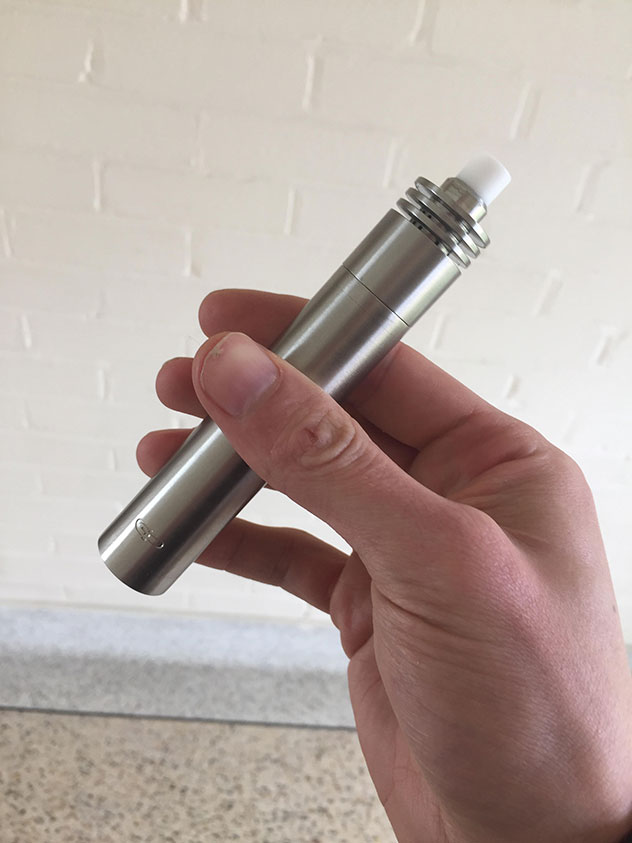 There are large heat fins at the top of the tank, an In’Ax trademark, which help dissipate heat. At the top you will also find the airflow adjustment, which we will go into detail about in the airflow section, and a removeable white PTFE Teflon drip tip. At the base you will notice the laser engraving and the PTFE insulator which helps to prevent the negative post from spinning when you coil. The negative post can also be replaced by pushing it out from the bottom, and you can swap in the spare or the new threaded post if you have purchased this separately. Just make sure you also swap the white insulator out for the one included with the threaded post. 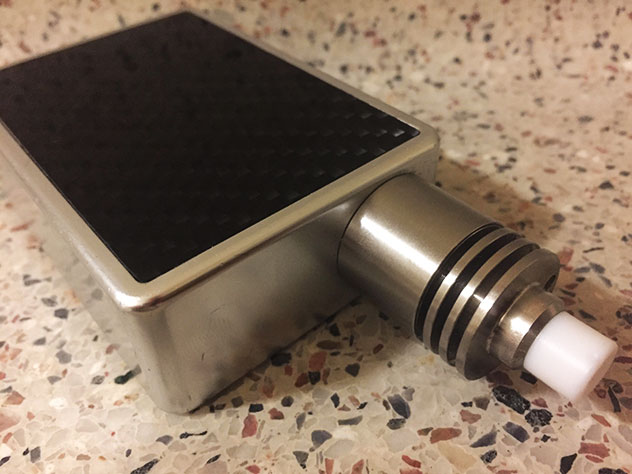 Capacity of the In’Ax MKIII is 3ml, and this can be extended to 5ml by purchasing the tank extender, which also increases the width from 22mm to 28.5mm. A clear tank section can also be purchased which allows you to see how much juice you have left, you just need to be careful with juices that contain known tank cracking ingredients. Filling the In’Ax MKIII is done via unscrewing the top cap, and filling juice to the side of the deck, until it is level with the base of the deck itself. It's a really simple filling system, and with the top cap screwed on correctly you won't have any leaks at all. 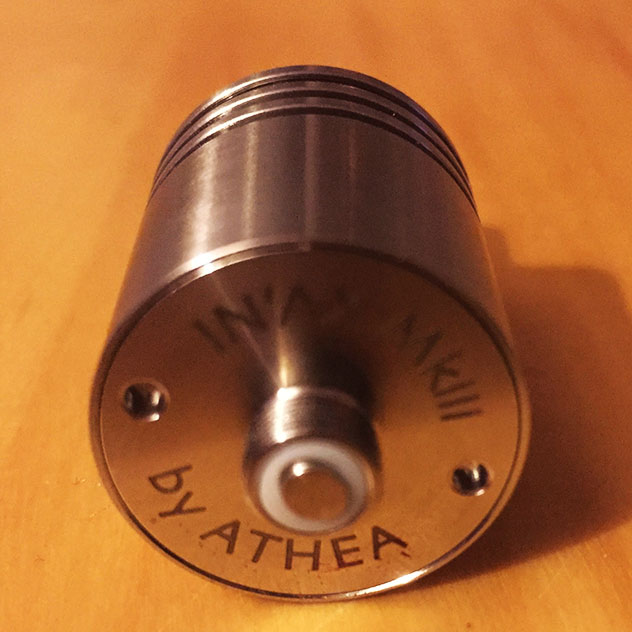 The In’Ax MKIII has a centrally positioned negative post which you wrap your mesh and wire around. Traditionally, this is supplied with Grypsticks, which are a trademark of the In’Ax series, these are a unique style of top nut that are pushed onto the top of the negative post and you will have various sizes of Grypsticks included which correspond to different wire sizes. You just need to ensure that you use the correct Grypstick that corresponds with the wire you are using. There is no negative screw present, instead there is a negative ring and before coiling you will want to unscrew this and set it to one side, to save you any trouble when it comes to coiling! 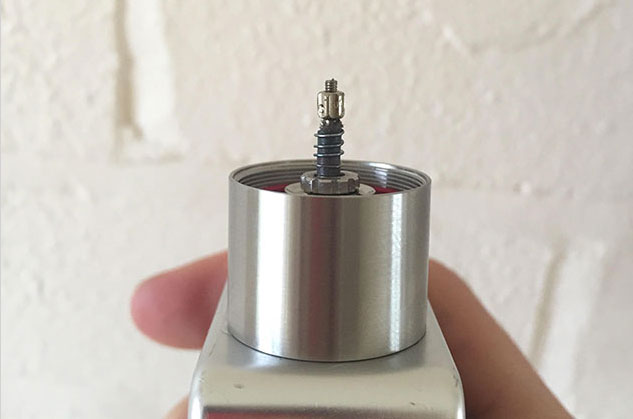 For my build, the build that has produced the best results for me has been 200sf mesh, with a 20mm height and 30mm width, and a 300 mesh topper, with a height of 7mm and width of 10mm. This has wicked anything I have thrown at it, performed amazingly at 25W and produced the best flavour results. I made sure this was well oxidized by thoroughly torching it, and then I made sure my wick was rolled reasonably tight, without being too tight or too loose.

After inserting my mesh wick onto the negative post, I then placed my In’Ax MKIII on my GP Paps V4 mech prior to coiling it. Coiling using a tube mod makes things so much easier, as you simply insert your wire through the top nut and into the groove on the negative post, tighten the top nut down, hold the wire at arms length and simply rotate your tube mod until you have the desired amount of wraps. You need to make sure you don't coil too tightly or too loosely. I used 4 wraps of 0.3mm Kanthal, which gave me a final resistance of 0.8ohm. I held down the bottom leg of my coil, and screwed the negative ring down tightly to trap this firmly. 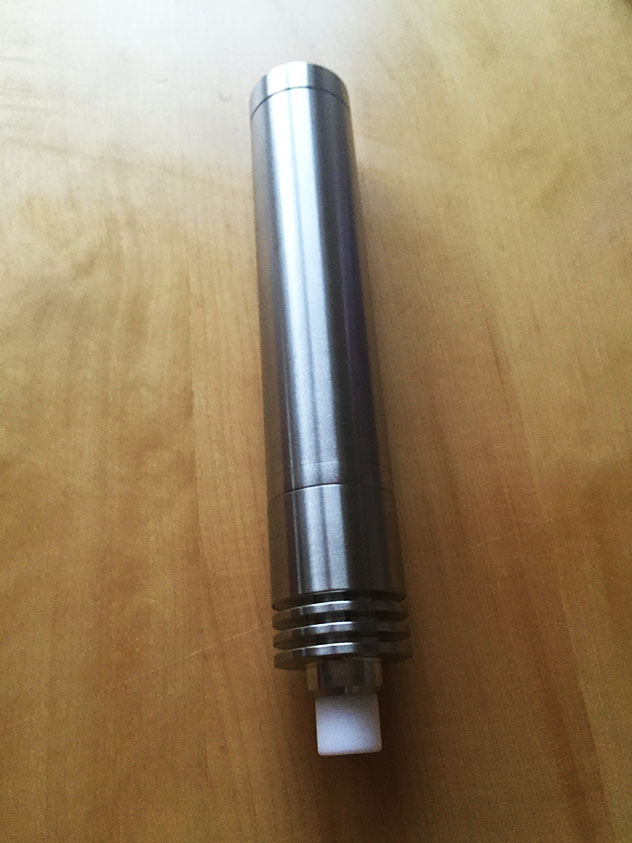 After this, I pulsed out my hotspots by pushing the fire button on my GP Paps V4 rapidly until I noticed that no areas of my mesh were glowing and my coil glowed evenly, and I also checked that I had no hot legs present. You can also pulse out hotspots with a VV/VW mod, by starting off pulsing at 11/12w and working your way up in 1w increments. Once I was satisfied, my In’Ax MKIII was ready for use!

Airflow on the In’Ax MKIII has been completely overhauled when compared to previous versions of the In’Ax, and it's an ingenious system. You will see a circular hole on the top cap, and a dot representing how many airflow holes are currently open. Rotating the top cap will move a window around inside the In’Ax MKIII, which will block off and open up different airflow configurations. 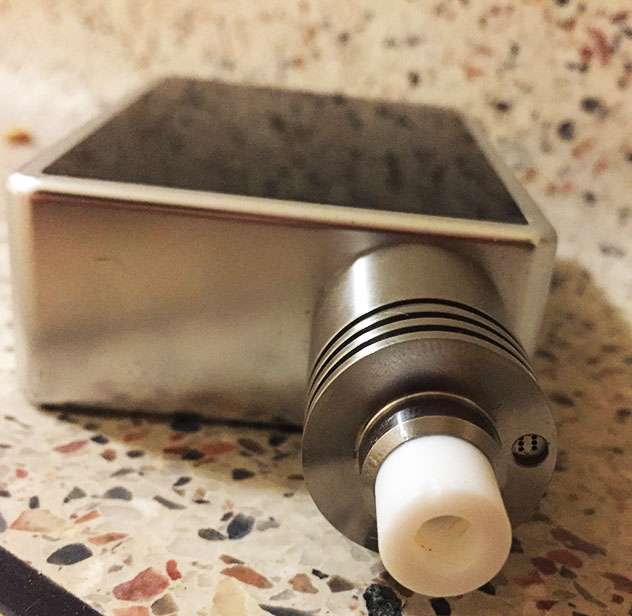 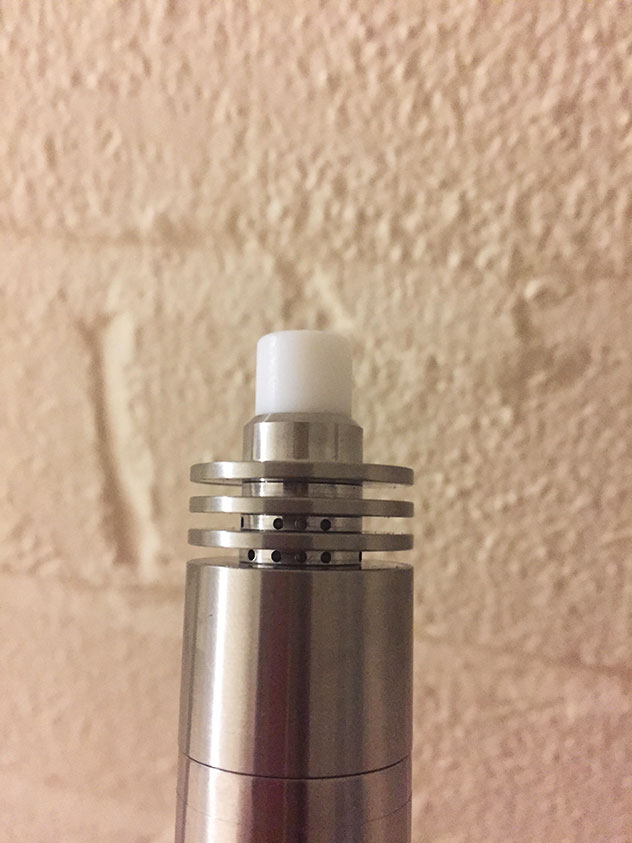 Previous iterations of the In’Ax have been all about producing exceptional flavour, and the In’Ax MKIII is the best of the bunch when it comes to this. The flavour from the In’Ax MKIIr is exceptional but the In’Ax MKIII is up there with the Nextiny in my opinion in terms of the best Genesis atomisers for flavour. It will appeal to both mouth to lung inhalers as well as direct lung hitters, as there are airflow options available here for both. 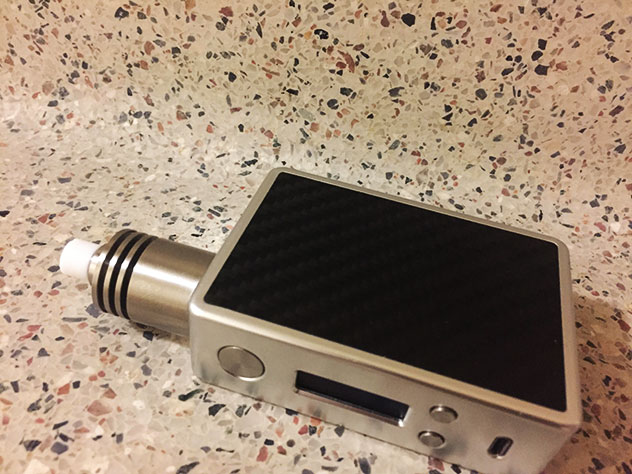 The bed in time for my mesh was very rapid, I was experiencing great flavour from the get go, and by the end of my first tankful of juice this was really singing! I was getting a wonderous, warm vape that was just full of the best flavour going, and as with decent mesh set ups, tobacco and fruit juices in particular were outstanding. I was able to run this at much higher wattage than I did with the In’Ax MKIIr, thanks to the increased airflow options and newly designed juice intakes. It doesn't get hot either, thanks to the ingeniously designed cooling heat fins, however I will say that for a mesh based Genesis atomiser it is a thirsty tank, I can quite easily get through three or more tanks in a single day. 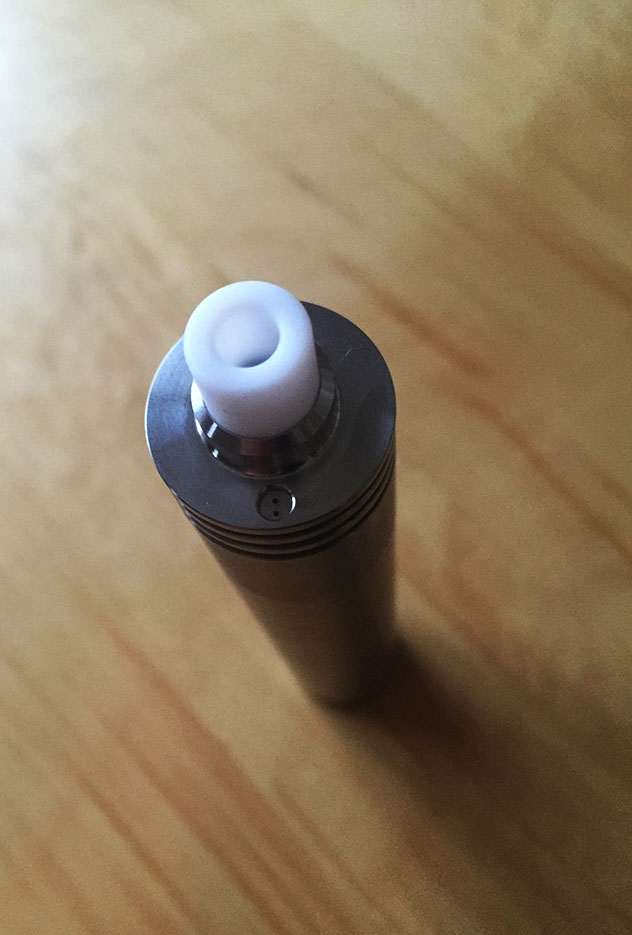 I haven't experienced a single leak with the In’Ax MKIII, and wicking with the build I use is exceptional. It wicks even high VG liquids easily, without fear of nasty mesh dry hits. It copes with chain vaping at over 20W perfectly on the maximum airflow setting, and it produces a very respectable amount of flavour as well!

If there is one way to describe what Athea Mods do, it would be innovation, as every release they have seems to bring something new to the table. The airflow control on the In’Ax MKIII is incredibly innovative and I rate this as one of the best airflow control systems I have ever used, in its ease of use and execution. The decision to use a negative ring, rather than a negative screw itself, means that trapping your coil leg down, eliminating hot legs and stabilizing resistance, is ingenious and executed perfectly, as with the airflow control ring. 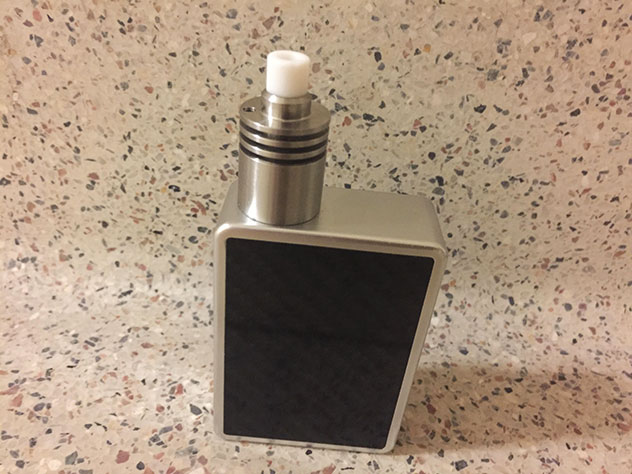 To sum it up, it's a work of engineering art, that backs up its world class build quality with stunning looks and top of the range performance. Flavour really doesn't get much better than this! 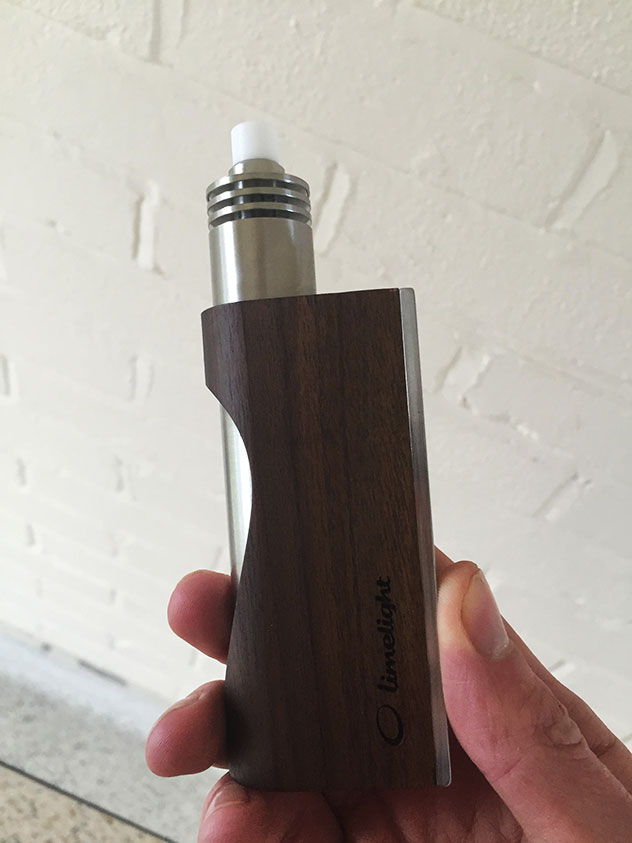