Hellvape got in touch recently and asked if I’d be interested in looking at their upcoming 28mm RTA which would be coming out in a couple of weeks. That was literally all the information I was given, erm that’s a bit vague but Hellvape generally makes good RTAs so yes, I’m all in thank you. The day before this arrived, Hellvape posted a teaser photo on their Facebook page, it’s got the Fat Rabbit logo on it and it appears to have a dual airflow system… interesting. 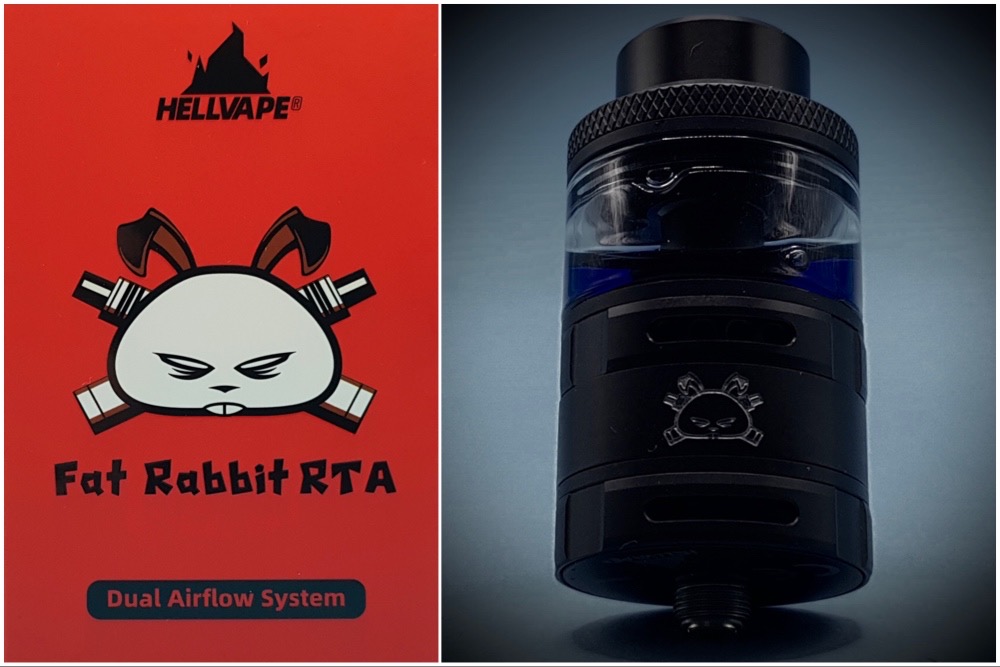 Once the package finally arrived revealing the Fat Rabbit name, I opened the box to do my initial inspection and photos, and two things crossed my mind.

A little later that evening my suspicions about this looking familiar were confirmed as it turns out this is the RTA that Hellvape and Vaping with Vic were collaborating on and, according to Vic’s account of events, was cancelled by Hellvape due to showing “little innovation”. Well it’s reappeared with the Fat Rabbit branding, and Vic seems to be more than a little bit sore on the subject. By his own admission though, this was an existing design that Hellvape were already working on before he joined the project and it has apparently had some more minor tweaks since they parted ways, so make of that what you will. Controversy over, let's dive down and take a closer look at what’s on offer. 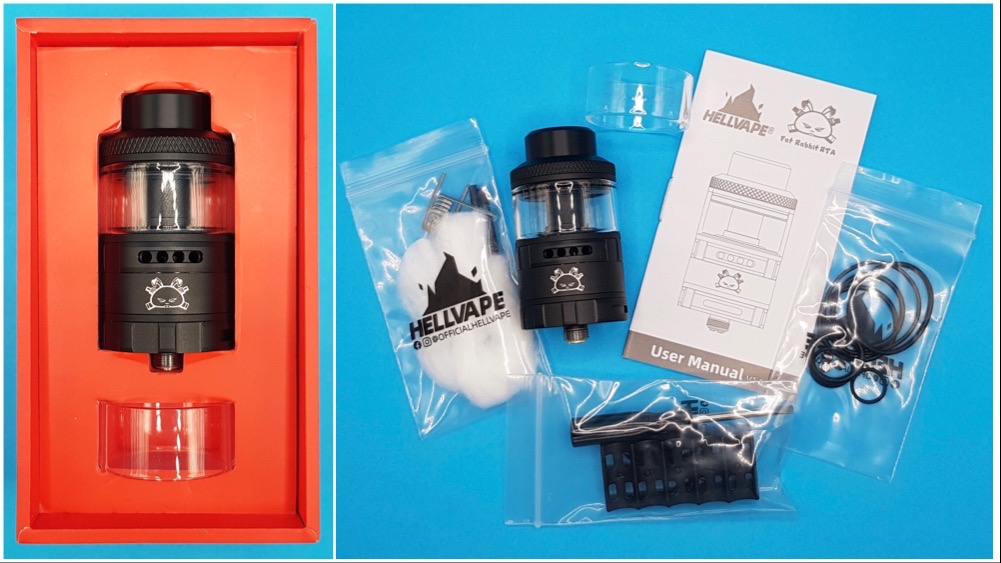 The included extras are quite generous with a spare glass, a baggie of o'rings and post screws, a coily style tool and screwdriver, and finally two premade coils and some cotton. As usual the premade coils are Ni80 (Nichrome), they look like pretty decent coils to be fair but I won’t be using them due to my nickel sensitivity. 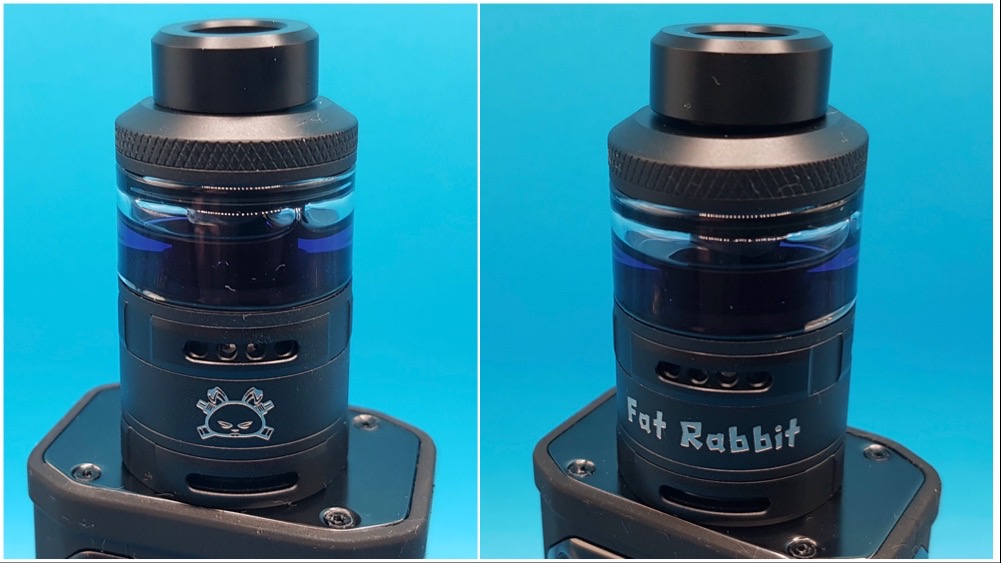 The Fat Rabbit RTA is available in seven colour options so you shouldn’t have difficulty finding one to suit your taste, mine was supplied in the “matte black” option with contrasting stainless steel logos and whilst I like the small Fat Rabbit logo on the one side, I could have done without the massive “Fat Rabbit” lettering on the opposite side. What you might find a little more difficult is finding a mod to put this on as this is quite a large tank with a 28.4mm diameter so you’ll need to dig out your best big boy mod here. Luckily I have a few that fit the bill perfectly and it’s currently sat on my Wotofo Mdura Pro (review here) where it looks perfectly proportioned. 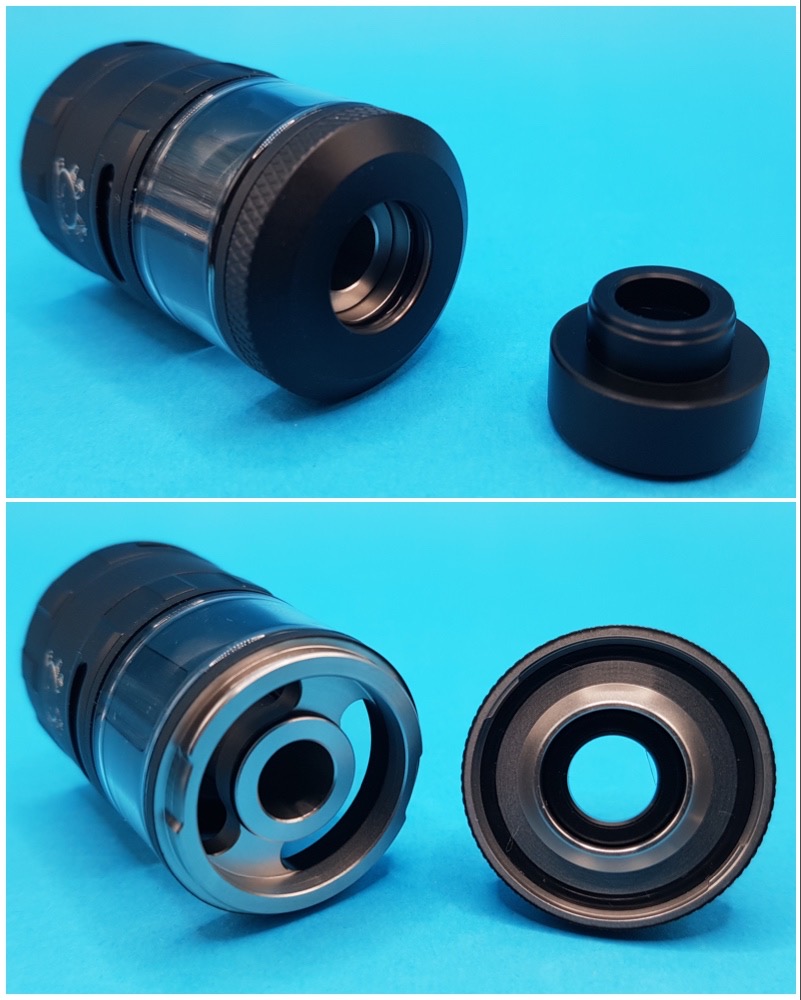 Working down from the top, this is capped off with a standard 810 drip tip. I found this to be a little loose in use, especially when it got a little condensation in the drip tip cup. I tried several other 810 drip tips with the same result so it looks like a slightly beefier o-ring might be warranted here, it’s not terrible but you will need to keep a track of that drip tip because it has come out in pockets whilst I’ve been out and about. The top cap is lightly knurled and comes off with just a quarter turn to reveal two absolutely massive fill ports.

The whole tank can be stripped down for cleaning, and in this international version there’s a 5.5ml capacity with the supplied straight glass sections which are held onto the chimney section with an o-ring. The TPD versions will only be 2ml obviously. From the photos on the product page, the tanks overall size appears the same so I’m assuming it’s going to come with one of those silly thick walled plastic/PCTG “glass” sections and it doesn’t appear that the TPD edition comes with an extra glass either so you may need to scour your favourite vendors for spare/extra glass sections if you want to beef this up to its full capacity. 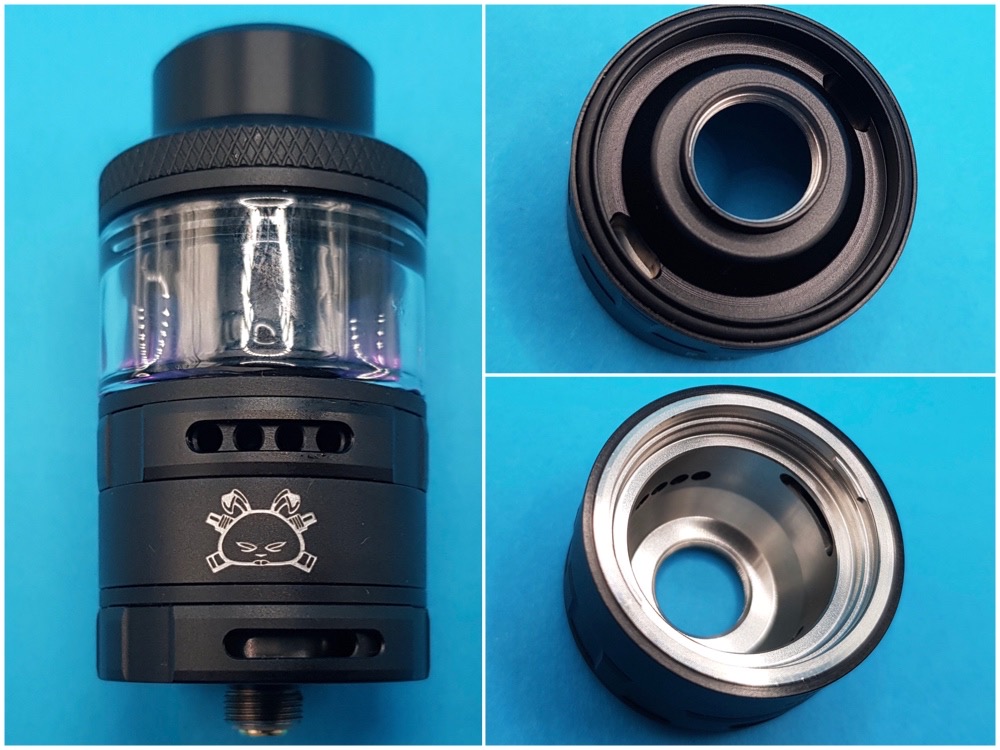 Below the chimney is the side AFC ring section. This provides both the side airflow with four 1.8mm holes on each side and the wicking ports where eliquid travels through the two holes above down to the two slots inside the chamber which line up with the wicking ports on the build deck. There’s also a little doming going on to try and reduce the chamber size and concentrate the vapour. This is a fairly substantial chunk of metal and feels well engineered. It doesn’t appear to break down any further so you can’t remove the AFC controller for deep cleaning but there are hard stops at the fully open and closed positions. 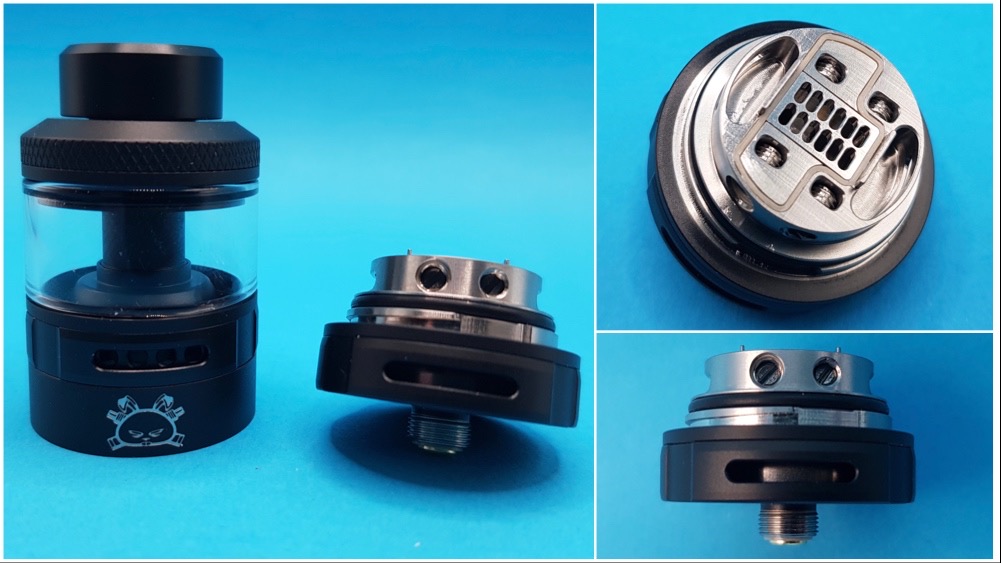 The build deck is held in place on a bayonet system rather than the traditional threaded design we’re all used to, as this is the first tank I’ve had that uses this, it has taken a little getting used to. I’ve found that it is much easier to insert or remove the deck with it fitted onto a mod, turn the tank all the way to the right and then pull to remove the deck (holding it upside down if you have any liquid inside of course!) and once you’re done, place the deck into the tank, turn until you feel it drop into place then turn the tank all the way to the left whilst applying a little downwards pressure to lock it into position.

The deck itself, much like the rest of the tank, is massive with an 18.7mm diameter, it’s nearly as big as some of the first rtas I had!  You shouldn’t have difficulty fitting complex coils as the four post holes are 3.2 x 2.0mm across and 4.5mm deep with screws coming in from the side of the deck which means it won't deform your coil legs either. I did feel the screws felt a bit grainy at first but this has improved quite a lot now I’ve had a couple of builds in here. The wicking ports are similarly large at 9.2 x 3.2mm so I’m more worried about not getting enough cotton in here rather than too much! The under coil airflow is divided up into twelve slots (six per side for dual coil builds) which are 1.0 x 2.0 mm each (or as near as my Chinese plastic calipers can manage to measure!) and this is fed by the lower AFC ring with two 12.5 x 2.0 mm cyclops style slots. Finally there’s a nicely protruding 510 pin at the bottom for those of you who like to use mechs. 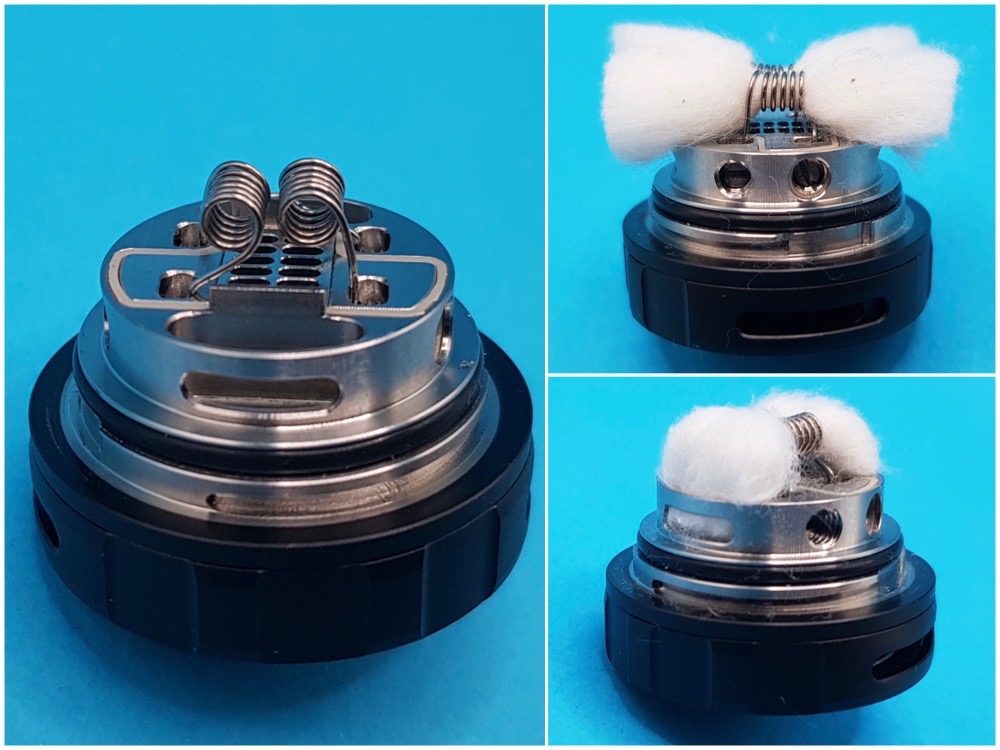 As is normal, I started off with a simple Kanthal 2.5mm inner diameter round wire build and I cut the legs at 6.0 mm as suggested on the supplied coily style tool which came out at 0.3ohms. If this is the type of build you tend to favour, you’ll be pleased to learn that I had no difficulty capturing the legs and bending the coils over to the centre proved that the 6mm leg length appears to be spot on. For wicking, I cut to the outside edge of the tank, lightly fluffed and then tucked everything neatly away.

With just the bottom airflow open, I was getting pretty good flavour at 65W. Next I tried just the side airflow, this was best at 75W and I was definitely surprised by the flavour I was getting as I don’t normally rate these side airflow designs. Finally with both airflows fully open and sticking to that 75W, I can’t believe how much flavour I’m getting off a simple round wire build, and that’s with all the airflow ports open!

I did discover a problem here though, and it’s one that plagues many side airflow tanks… it was leaking quite badly if I left this laid on it’s side. This did settle down a bit once the cotton had fully saturated and expanded to fill the wick ports, so hopefully I can fix that in later builds. 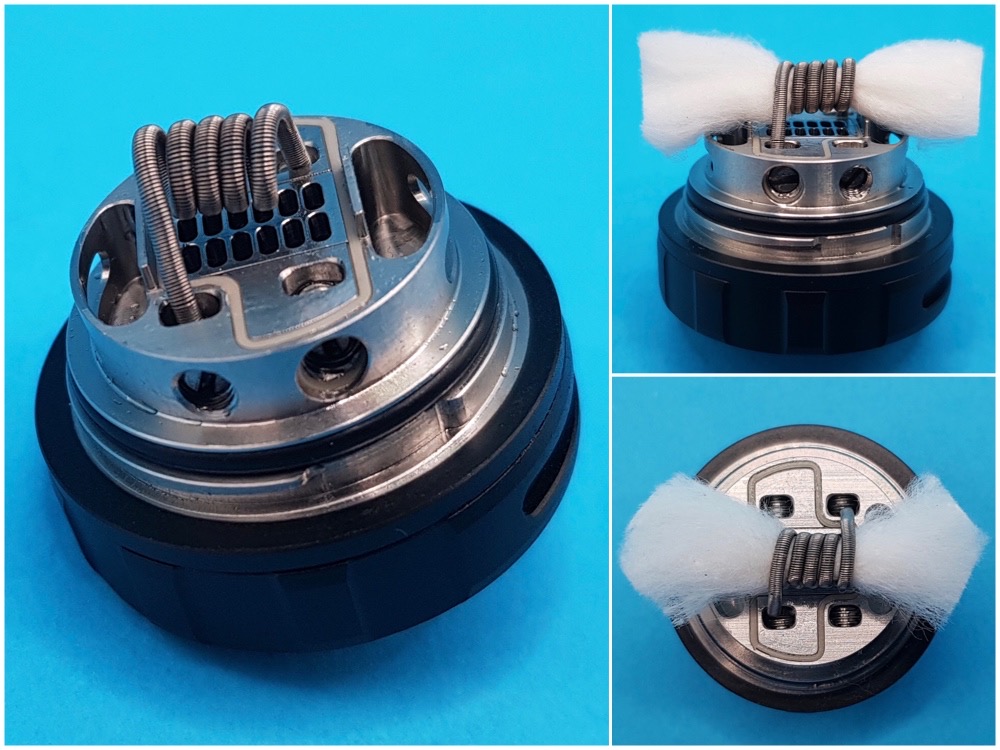 For my next trick, I decided to try out a single coil configuration. Given how big the wick ports are, I thought it might be an exercise in futility trying to use my usual 2.5mm inner diameter coil so I bumped it up to 3mm instead. Using a kanthal fused clapton, I once again cut the legs to 6mm, it was a bit tricky fitting the coil diagonally across the deck and it appears I didn’t wind the coil particularly tight as once I’d straightened things out, it looked a bit high. One extra clip with the legs now at 7mm (one side was much longer than that initially) things went back in much more smoothly and the height looked about right as well. The final build came to 0.33ohms. I wick'd this as before and added a diamond cut to increase the wicking speed, this turned out to be a huge mistake as I now have a slightly incontinent Fat Rabbit with leaking on filling, D’oh!

Results were the same as the round wire build but with a fuller, more robust flavour. 60W with bottom airflow… great,  65W with side airflow… great, 65W with bottom and side airflow… the best. In fact I was enjoying this so much (despite the leaking) that I continued to use this for several days. I'm sure the wicking can be resolved with a few more practice runs, but I need to crack on for now and get the final build in here. 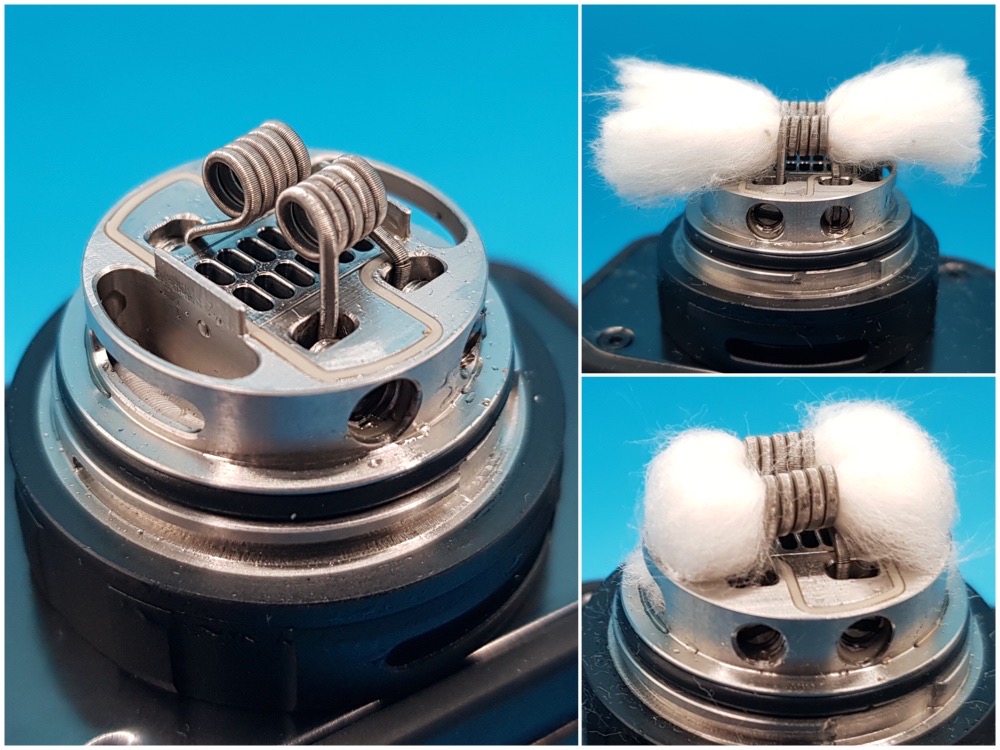 This time I opted for dual kanthal fused claptons with an inner diameter of 2.5mm which came out to 0.2ohms. This time I cut the wicks a couple of millimeters beyond the edge of the tank and only very lightly fluffed the tails. This seems to have done the trick as I can now lay this on its side without leaking and the wicking still keeps up. I’d say here that if you suspect you don’t have enough wicking, then you almost certainly don’t!

Hellvape has pulled off a bit of a blinder here. This is one of the easiest build decks I’ve worked on, and I’m sure with a few more practice runs I’ll be able to get that wicking down pat. Each airflow individually is slightly restricted, particularly the bottom airflow, but combine them and a little bit of magic happens. I haven’t been disappointed by any of the three builds above so you should be  able to get decent results from similar setups. Controversy surrounding Vaping with Vic over who’s design this is aside, this is a damn good RTA and you’d be missing out if you gave this one a pass.

Many thanks to Hellvape for sending the Fat Rabbit RTA out for review. 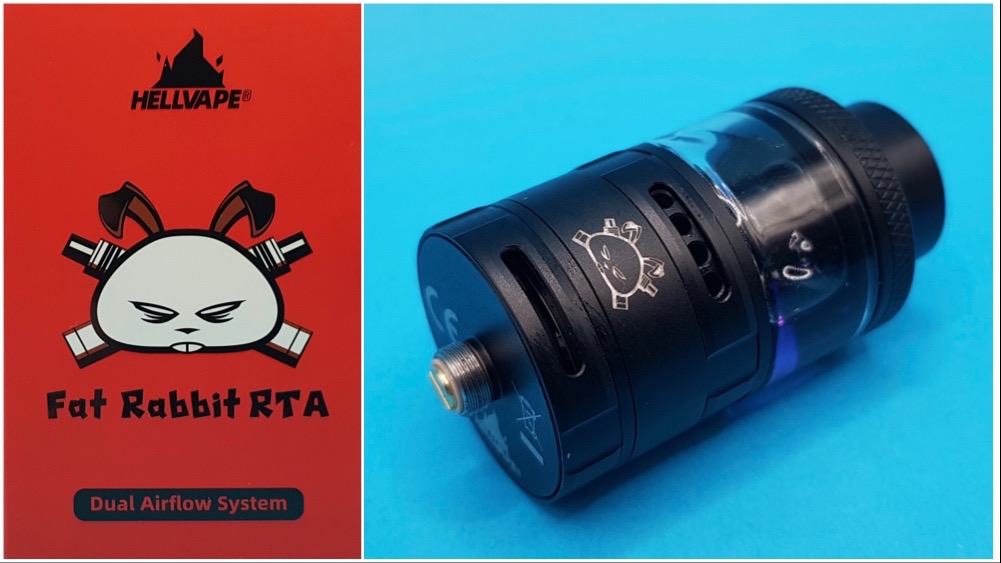