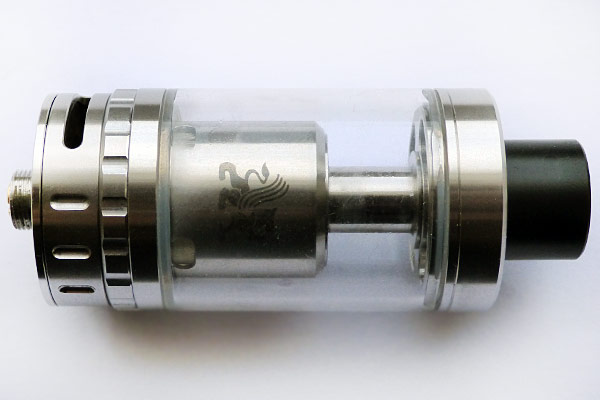 The Griffin 25 by Geekvape is a 6.2ml capacity RTA (Rebuildable Tank Atomizer). It features a top filling design, juice flow control, a large Velocity style build deck and fully adjustable airflow. It is available for purchase as a standard model or a top airflow model.

I will be the first to admit that I didn’t really get on with the original Griffin so I was hoping this version would represent something of a significant improvement. To find out exactly what I thought of the Griffin 25 let’s dive straight into the review. 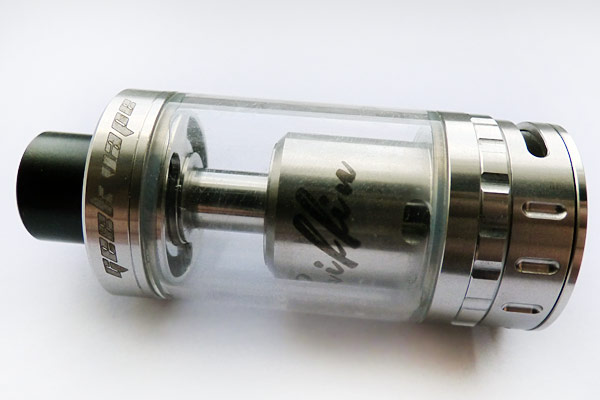 The first thing you will notice about the Griffin 25 is its size because this really is not a small RTA. Despite being rather tall the design of the tank is attractive and nicely streamlined. Constructed from Stainless Steel and Silica Glass the Griffin 25 is 25mm in diameter if the name hasn’t rather obviously given that fact away, so it will overhang on smaller devices.

There is a good amount of knurling on both the lower tank section and the airflow control which does help to provide a good grip when making adjustments but I did feel the top cap could have benefitted from some knurling too. On the whole the construction is fairly decent given the price but in one or two places the threads tend to be a bit rough and this results in a slightly crunchy feeling when trying to fit the individual parts back together and quite often it can take more than one attempt which is a slight shame but it still remains perfectly serviceable and you will get used to it with frequent use.

The tank features two main logos; a griffin symbol engraved on one side of the chimney and the words Griffin engraved on the opposite side. In addition the manufacturers name “Geek Vape” is engraved on the side of the top cap. I am not personally keen on atomizers being too logo heavy but I rather like the ones on the Griffin 25 and I feel they are tastefully done.

For anyone who hates the TPD 2ml restriction, a rebuildable atomizer such as the Griffin 25 will certainly appeal since it has a whopping 6.2ml capacity but before you get carried away in your excitement keep in mind that the juice can drain pretty quickly when vaping. The included drip tip is made of Delrin which helps to minimise the amount of heat that reaches your lips and should you prefer to use your own drip tips the box does included a 510 drip tip adapter. 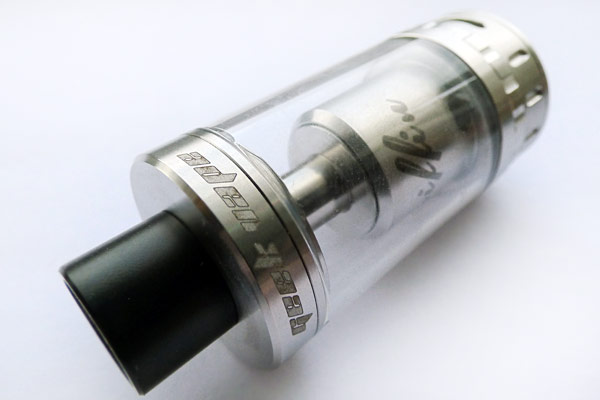 The airflow is fully adjustable and features a Cyclops style design. The adjustment ring works well and I found it to be neither too stiff nor too loose. At its most open the Griffin 25 is suited to direct lung inhales although it does feel ever so slightly restrictive if you are specifically using it in single coil mode. Closing the airflow down leads to a progressively more restrictive lung inhale and at no point did I feel the draw was tight enough to suit someone who enjoys a mouth to lung vape experience. 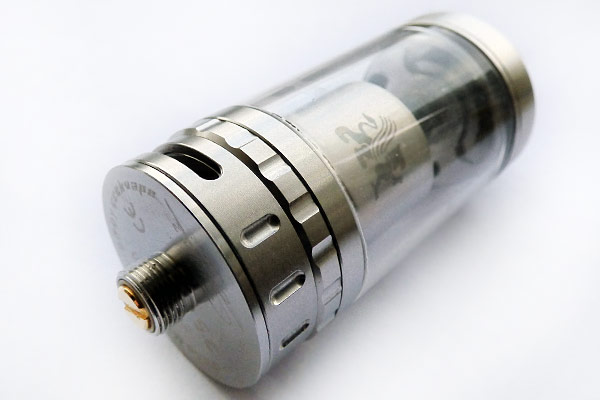 Fitting the coils is very straightforward since the tank has a typical Velocity style deck. The side tension screws are decent and the post holes are large enough to easily accommodate Clapton wire. The only thing you have to be careful about is to make sure that there is sufficient clearance when screwing on the chamber section. You can either set the tank up with a single or a dual coil but if you go for a dual coil you will have to remove the single coil adapter plug first.

Wicking can be a bit of a pain in the Griffin 25 because you need enough cotton in the top of the channels but not so much that you end up blocking the juice flow and too little cotton just results in a lot of leaking. You will find if you entirely new to this style of tank that it might require a bit of practice so I advise you don’t fill it entirely to capacity the first couple of times and unless using very thick E-liquid make sure to open the juice flow gradually.

The juice flow control works well and you only need to twist the tank to open up the juice holes. Filling is simple and you simply close down the juice flow first and then unscrew the top cap. There is absolutely loads of space available and I was quite literally taking a large 100ml bottle and pouring in juice. The top cap threads on the tank I was sent for review did feel a bit crunchy and as such the lid doesn’t always screw on properly on the first attempt but once you get it on it doesn’t prevent any further problems. 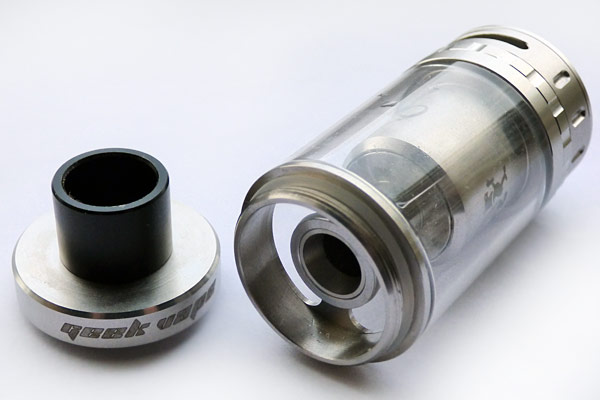 In some respects I was excepting a single coil setup in this tank to be something of a washout since most very airy dual coil style tanks often tend to be lacking in this mode. I had fitted a single 0.6ohm Clapton coil and after having primed the wicks and filled up the tank with Mother’s Milk I took my first vape and the flavour was actually rather good…surprisingly good! 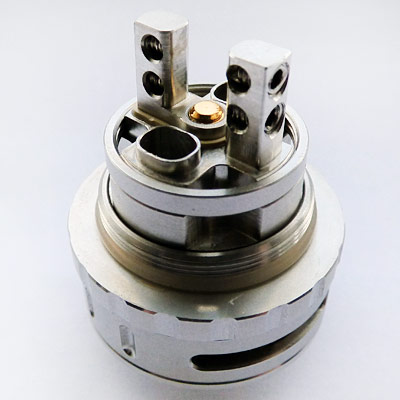 It did take a little while for the coil to break in properly and I suspect the wicking might not have been entirely saturated because I did get a few dry hits when chain vaping. These went away after a short amount of time and the flavour while initially good actually got even better once I had drained about one third of the capacity. I found myself really enjoying the vape experience the Griffin 25 offered and that was only at a modest 25-30 Watts. The airflow was extremely pleasant and the tank put out an extremely generous amount of vapour that quickly fogged up my room!

The funny thing is that I didn’t really see myself enjoying the Griffin 25 since the orginal Griffin felt very lacklustre to me and quite frankly when I eventually got to try it I felt it was overrated but the Griffin 25 is much better in my opinion. As you might expect since I enjoyed the vape I was getting I decided to go for a few refills of Mother’s Milk and also tried out some Colonel Boom’s Key West in it and I found I was perfectly satisfied with the single coil setup. One thing you should note is that while the capacity is large the tank does drain quickly due to the large amount of airflow so this might not be for you if you are trying to stick to a juice budget.

After spending an entire day vaping this tank in single coil mode I ripped out the build on the following day and installed a 0.3ohm dual Clapton coil setup. I think it will be pretty obvious to most users when I state that flavour certainly went up a significant notch, along with but as a consequence the juice gets positively devoured so you will likely be refilling often and that setup does require more power so your batteries will also drain much faster. Having removed the single coil adapter plug to fit the dual coils the draw was also much airier and resulted in much greater vapour production

I had been sent some Flavour Boss Mother’s Milk for review that came in a 100ml bottle and I must have got through 40-50ml of that in a day using the Griffin 25 so it is quite easy to go completely nuts if you aren’t careful but despite absolutely hammering my juice stash I got a great deal enjoyment out of it! 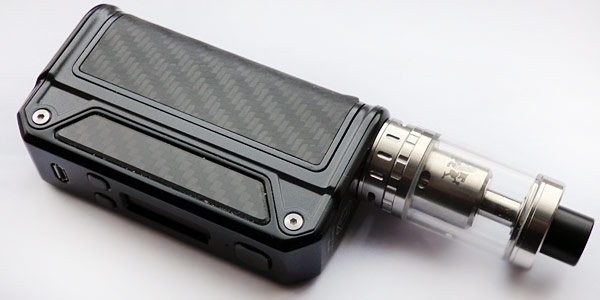 For someone like myself who wasn’t a massive fan of the original 22mm Griffin which I felt was a bit overhyped, the Griffin 25 really surprised me and I actually ended up liking it far more than I ever expected!

The vape experience it offers is extremely enjoyable and I thought that the flavour was very good even when using a single Clapton coil. As you would expect a dual coil setup does yield improved flavour, a much airier vape and increased vapour production but at the cost of faster juice consumption. For the cloud chasing fans out there you are unlikely to be disappointed by this tank because it does put out some very dense vapour!

Building this tank also felt far more straightforward than the original Griffin even though they both use the popular Velocity style post arrangement due to the slightly larger deck space. Wicking can still be a bit trial and error while the tank is still new to you and it can be very unforgiving and leak heavily if you get it wrong so do keep that in mind but it is well worth persevering until you nail it.

The only real negatives of this tank is the threading which does feel a bit crunchy in a number of areas but is acceptable considering the price point and the fact that the capacity can drain very quickly.

If you are on the lookout for a tank that caters to either a single or dual coil setup and offers a very good experience for both then the Griffin 25 is well worth considering because it will give you very enjoyable flavour and superb cloud production!

Please note that Geekvape have also produced the Griffin 25 Top Airflow version which is almost identical but features additional top adjustable airflow but we only managed to get our hands on the standard version for review. I should point out that there is also a Griffin 25 Plus available now so hopefully we get chance to cover that at some point and see how it compares.