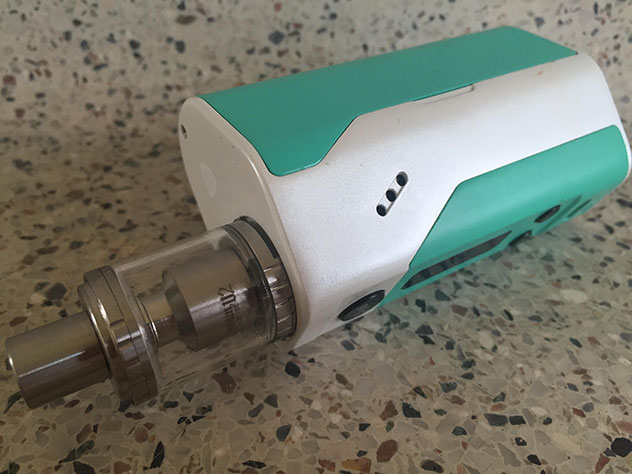 After being released to a very warm reception, the Goblin RTA was followed up by a vastly redesigned successor in the form of the Goblin Mini, which at the time was one of the shortest RTAs around, sported a new lever airflow control system, single and dual coil options but kept the four post build deck that served the original Goblin so well. There were a few small problems with it, such as the tendency for it to leak if your wicking wasn't absolutely spot on, a small build deck, the non standard drip tip fitting which necessitated the purchase of an adaptor if you wanted to use your own drip tip and one of my pet hates, a small and fiddly bottom fill screw. Youde have looked to rectify these small issues with the Goblin Mini V2, which keeps the same excellent ideas from the original Goblin Mini but now sports a slightly larger build deck, a 510 drip tip fitting and a top filling system. The Goblin Mini V2 on paper looks to be shaping up to be the ultimate budget rebuildable tank atomizer.

I've been a big fan of the Goblin RTA ever since the very first one came to market, and as you would probably expect I was dead excited to get my hands on the Goblin Mini V2. Let's see if it lives up to my big expectations… 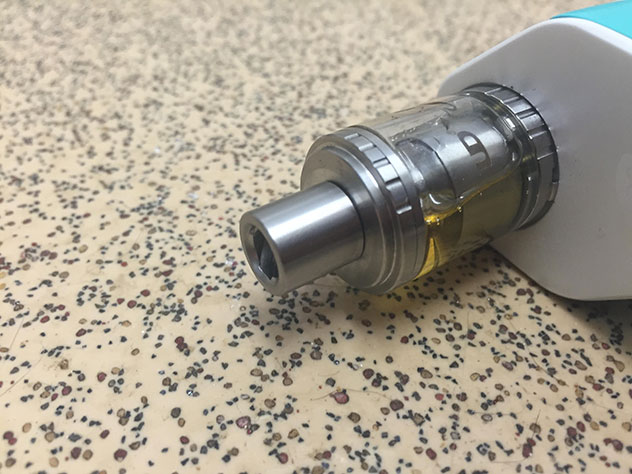 Barring the addition of the ‘V2’ text, the Goblin Mini V2 comes in an identical box to the Goblin Mini. It's a smart, black presentation box housing the following contents: 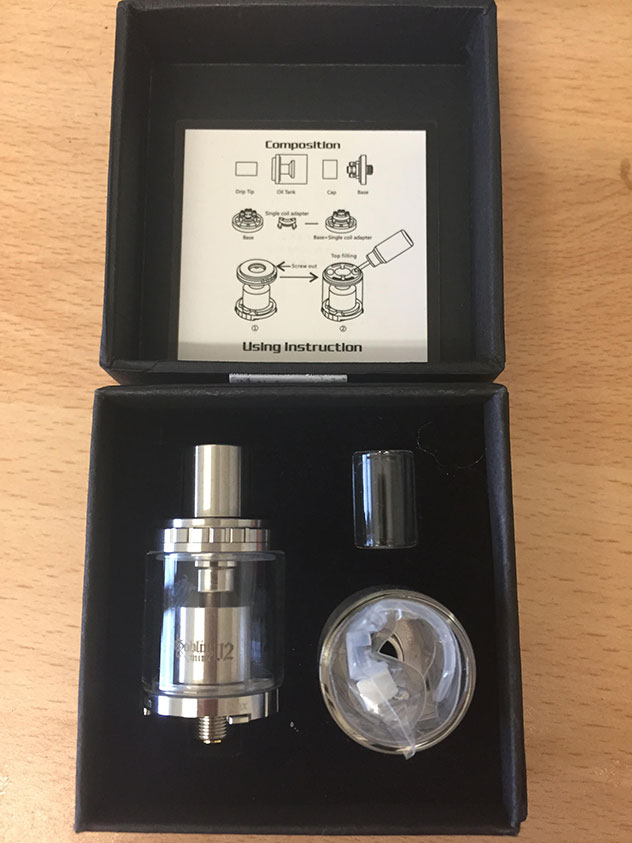 Height wise, excluding the drip tip and 510 connector, it's nigh on the same as the Goblin Mini V1, with the V2 being only 0.6mm taller, it retains the same width at 22mm, and there is a gold plated adjustable 510 connector to ensure you have a flush fit on your mod. It's constructed of 304 Stainless Steel, with a Pyrex Glass tank section. You can strip the Goblin Mini V2 near enough right the way down to clean, and the threads are smooth and well machined. One of the first big improvements Youde have made here is to include a standard 510 drip tip fitting, so now you can use your own drip tips, which you were unable to do with the original Goblin Mini, and these sit flush with no lean on the Goblin Mini V2. 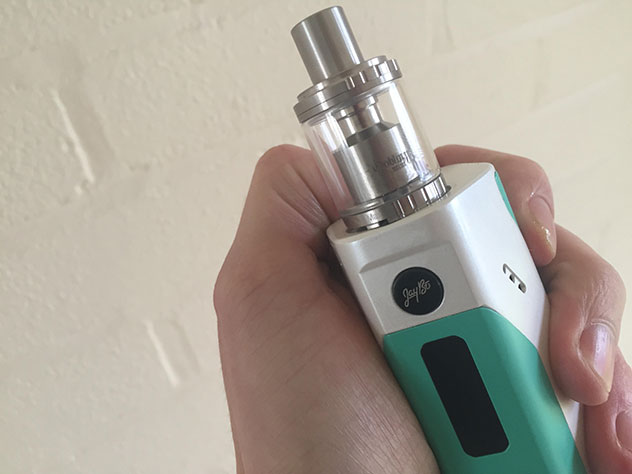 The decision to include a top filling method has made a huge difference to me, as I'm sure it will to many others too. The bottom fill screw let down my overall experience with the Goblin Mini V1, as it was both fiddly and cumbersome to use, with the bottom fill screw prone to getting lost or cross threaded, plus the fill port was not the largest around. This time, thankfully the bottom fill method has been totally done away with, and in its place is an excellent top fill system giving you the opportunity to fill with juice in no time at all. The top cap screws away easily, revealing two generously sized fill ports at the top, you simply fill with juice through either port, replace the top cap and away you go. With this, the Goblin has gone from having one of the more cumbersome filling methods, to one of the best around. It's a massive improvement! 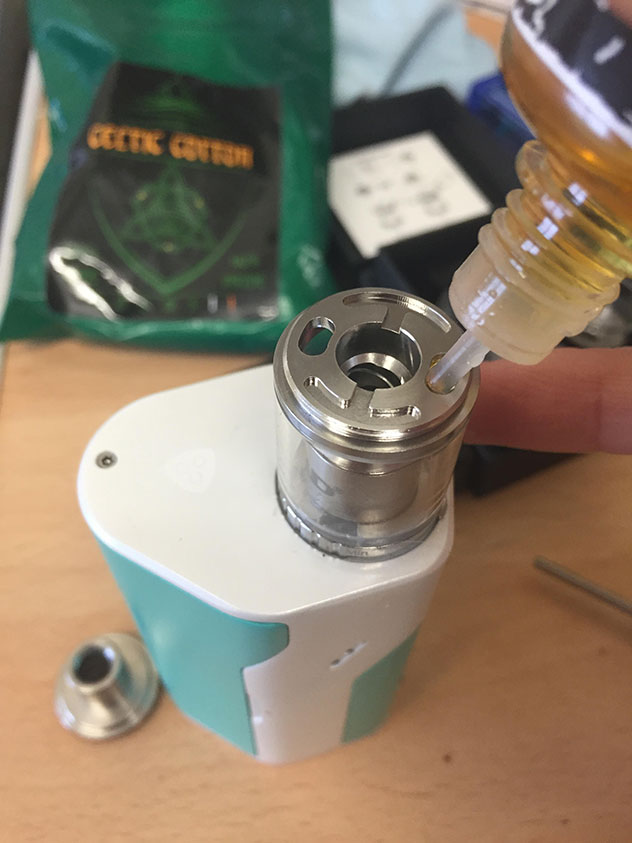 Capacity remains at 3ml and it is as thirsty as ever, especially when running it at low resistance/high wattage, mainly in part down to those huge juice channels! The pendulum airflow system from the original Goblin Mini is in place for the V2, the only difference being that it can now be adjusted from either side, with the addition of a second airflow adjustment lever.

Overall in the looks department, it's a stunning looker. I'm a big fan of the small form factor and minimalist looks, the build quality overall is great too, feeling very robust and worthy of a much larger price tag. Top marks all round here from Youde.

The build deck matches what you have come to expect from the Goblin series of tanks, with the exception being that it is slightly larger and taller now, with a raised lip around each airflow slot. There are four posts present, with medium sized post holes and Phillips cross head screws, and a large airflow hole at either side of the deck. Four large 4mm juice channels ensure that your build is constantly fed with juice. The chamber is in two parts, with the chimney sleeve removable from the chimney itself, so you can give your build the once over before putting everything back together. 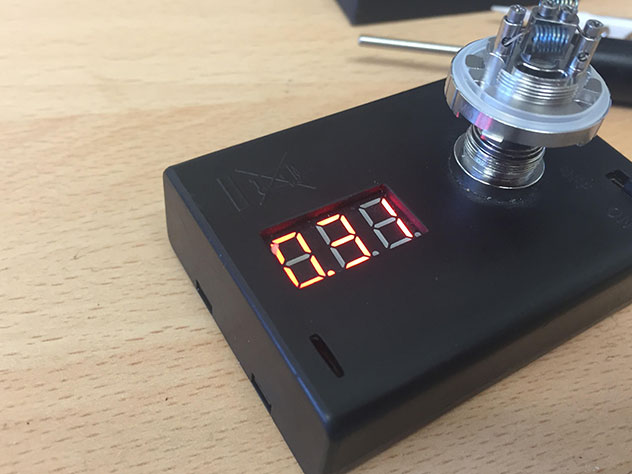 For my own build I went with 8 wraps of 0.4mm Nichrome 80, with a 2.5mm internal diameter, coming out at 0.31ohms. The increased build space meant I could build quickly and easily, I didn't have to spend time fussing with and adjusting my build to get it to fit. I wicked with Celtic Cotton and made sure that I could still move the cotton with a tug on either wick tail, and I also ensured there was enough in the top of the juice channels to prevent leaks. I was really surprised when the chimney fit over my build first time and there was even room to spare!

If single coil and/or mouth to lung is more your thing, then with the included single coil adaptor you can build with only the one coil. The adaptor has had a slight adjustment this time around, as there is a silicon plug included that also blocks off the unused airflow and juice channels too, as an extra fail safe against leaks.

There's a slight adjustment here over the original Goblin Mini’s unique pendulum airflow system, with the V2 it can now be adjusted from either side of the tank. It doesn't bring anything to the table when it comes to the performance of the Goblin Mini V2, but it just gives an extra option when it comes to adjusting the airflow. 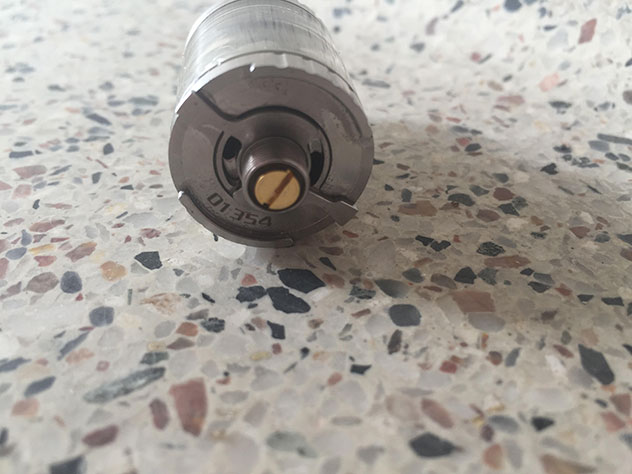 Airflow is drawn from underneath the tank itself, hitting the coils from underneath to maximize flavour and cloud production. Airflow is adjusted from ‘min’ to ‘max’ and caters for both mouth to lung and direct lung hitters. If you set it to just under half open, and have a single coil build in, you can achieve a hugely flavoursome mouth to lung hit, above half open and you are entering cloud chasers territory. With it fully open, you can really fling the clouds with this thing! My own preference is to have the airflow set around three quarters open, making for an excellent mix of flavour and clouds. I'm pleased to report that this time around I haven't felt the need to close the airflow off fully to guard against leaks when carrying the Goblin Mini V2 around, as I'm yet to experience any leakage...

Clouds and flavour have been a hallmark of the previous two Goblin tanks, and the Goblin Mini V2 really delivers on both fronts. I've always rated the Goblin and Goblin Mini as two of the best flavour tanks out there, and the Goblin Mini V2 boasts the same supreme flavourful vape. It's akin to flavour performance from an RDA, with the shortened height and small chamber condensing the flavour and bringing a huge wallop of flavour to your tastebuds. Juices never seem to get muted even at high wattage, individual flavour notes can be identified easily and complex juices, such as the Manabush Spiritwalker range, absolutely shine. The flavour really is stunning. Plus, if you are running it in single coil and mouth to lung vaping, you'll benefit from really intense flavour on par with atomizers costing three to four times as much! 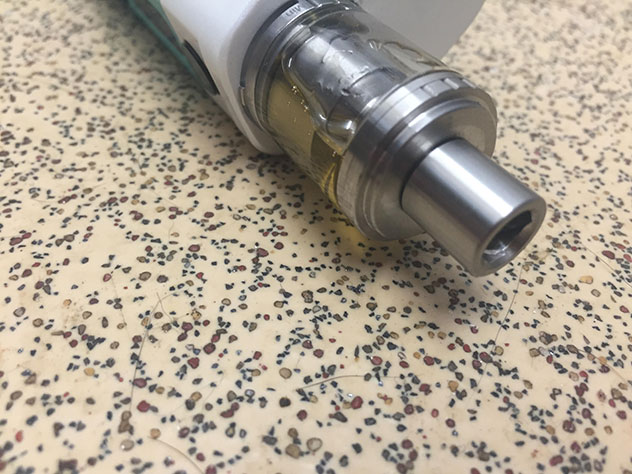 If you like clouds, the Goblin Mini V2 doesn't disappoint here. I've been running my Goblin Mini V2 at between 45-75W and it absolutely chucks clouds like anything else out there. It's as airy as you want it to be really, and wide open it's truly spectacular. At heart, it's a flavour RTA but it can provide huge volumes of vapour that can mix it with the best cloud chasing tanks and drippers around. Including the heat sink adaptor was a great move by Youde, as when running the Goblin Mini V2 at high wattage this helps greatly to keep your vape cool.

The four 4mm juice flow channels ensure the Goblin Mini wicks pretty much anything you can chuck at it. I've had up to 90VG in here, with no sign of a dry hit, even when chain vaping at 70W. Best of all the tweaks to the build deck meant for the first time with a Goblin I'm yet to experience a leak, even when I've left it on its side too.

Version one of the Goblin Mini was almost the perfect RTA, with an easy four post build deck, single and dual coil options, outstanding flavour and cloud production almost on par with an RDA all available at a budget friendly price. However there were a couple of minor issues with it, such as the non standard drip tip fitting and the fiddly bottom fill screw. Thankfully, the minor niggles present with the Goblin Mini V1 have been ironed out, with the introduction of a really superb top fill system and a 510 drip tip fitting, allowing you to use your favourite drip tip if the supplied ones aren't to your taste. The build deck is also ever so slightly bigger, giving you a little more wiggle room with your builds, and the silver plated 510 connector pin has been swapped out for a gold plated version, for better conductivity. These minor tweaks have really made for a truly fantastic RTA, and one now that has become my day to day tank.

I've always rated the Goblin tanks as one of the few that can rub shoulders with many an RDA, and the Goblin Mini V2 offers clouds and flavour in abundance. With single or dual coil options it caters for both mouth to lung and direct lung hitters, it performs just as well at high or low wattage, and it never compromises on performance. For the first time with a Goblin as well, I've not yet experienced any leakage, which may be due to the slight tweaks Youde have made to the build deck. The airflow control system, although not perfect, functions extremely well and can now be adjusted from either side of the tank.

If you are looking for a tank that can compete with an RDA, that's available at a fantastic price and when wicked correctly, does not leak, the Goblin Mini V2 will appeal to you greatly. It's a very versatile unit that offers top performance, great build quality at a low cost. The Goblin Mini V2 may be small in size, but this small package is head and shoulders above the rest when it comes to budget RTAs!

We purchased this item for review from Heaven Gifts. 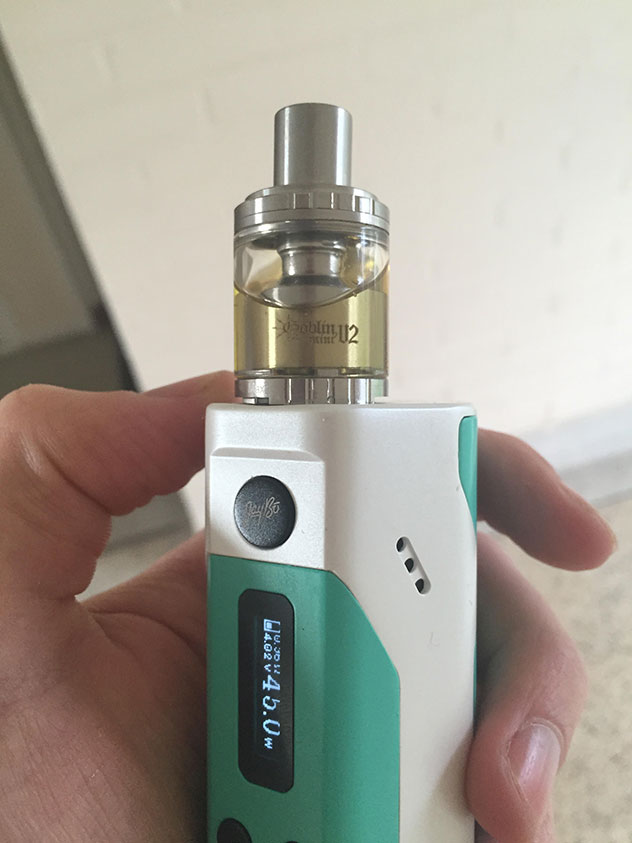