Fed up of the seemingly constant flow of pod mods? Well our friends at Sourcemore have sent out the Gas Mods KREE 24 rta for me to try. Now where did I put my build kit?

The Gas Mods KREE 24 comes in a small cardboard box with a photo on the front and kit contents listed on the rear and a scratch ‘n’ sniff code on one side, cutouts in the lid would definitely have helped here as it was quite difficult to prise the lid off! Inside the contents are all neatly laid out in a single layer covered by a small instruction card.

Besides the KREE 24  itself, other parts in the box are a second larger tank, four airflow insets, spare o-rings, deck and 510 pin screws, chimney extender for the larger tank and the classic chinese blue screwdriver. Strangely for this day and age, there aren’t any pre-made coils in the box. 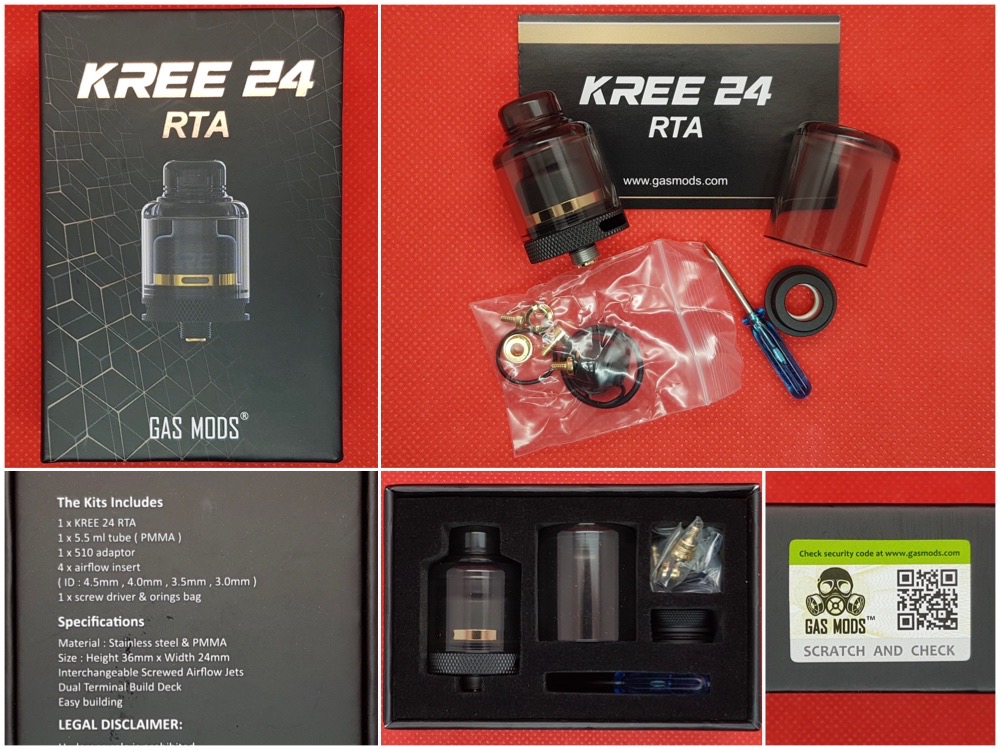 You get two tanks in the kit, a short 3.5ml version and a tall 5.5ml version. With the silver version of the rta, the shorter tank is glass whilst in the black and grey variants both tanks are PMMA plastic, so if you have a tendency towards tank crackers you may want to consider either buying the silver version or an extra glass which is available separately. It’s quite dinky in either configuration at 35mm with the short tank and 41mm with the taller tank, and should fit comfortably on most modern mods at just 24mm diameter.

The tank is held in place with the plastic (pmma?) drip tip which doubles up as the top cap/fill port. Also included in the kit is a metal 510 drip adapter if you wish to use your own 510 style drip tip. When using the plastic drip tip, care should be taken as you’re screwing plastic onto metal, so you don’t want to cross thread things and end up stripping the threads. You’ve always got the metal adapter to fall back on if you do though. When filling, take care as the tank is only held in place by the o-ring at the base. This isn’t too much of an issue with the shorter tank, but you definitely need to take more care when using the taller tank that you don’t dislodge anything! The base has two large cyclops air inlets, this isn’t adjustable though as the airflow is determined by the four included airflow inserts which screw into the build deck. These are 3.0, 3.5, 4.0 and 4.5mm in diameter so all are aimed at restricted direct to full direct lung builds, mouth to lung vapers will need to look elsewhere. I found these a little tricky to install, a large household screwdriver is more help here than the included Barbie style screwdriver, in fact that’s hopeless for any of the screws used on the build deck as well so its inclusion is rather baffling.

The deck screws are fairly chunky with raised lips either side to aid in capturing wires. They are quite narrow side to side though which does somewhat restrict the size of builds you can get in here. Either side of the deck are two large wick ports/wells for your cotton. 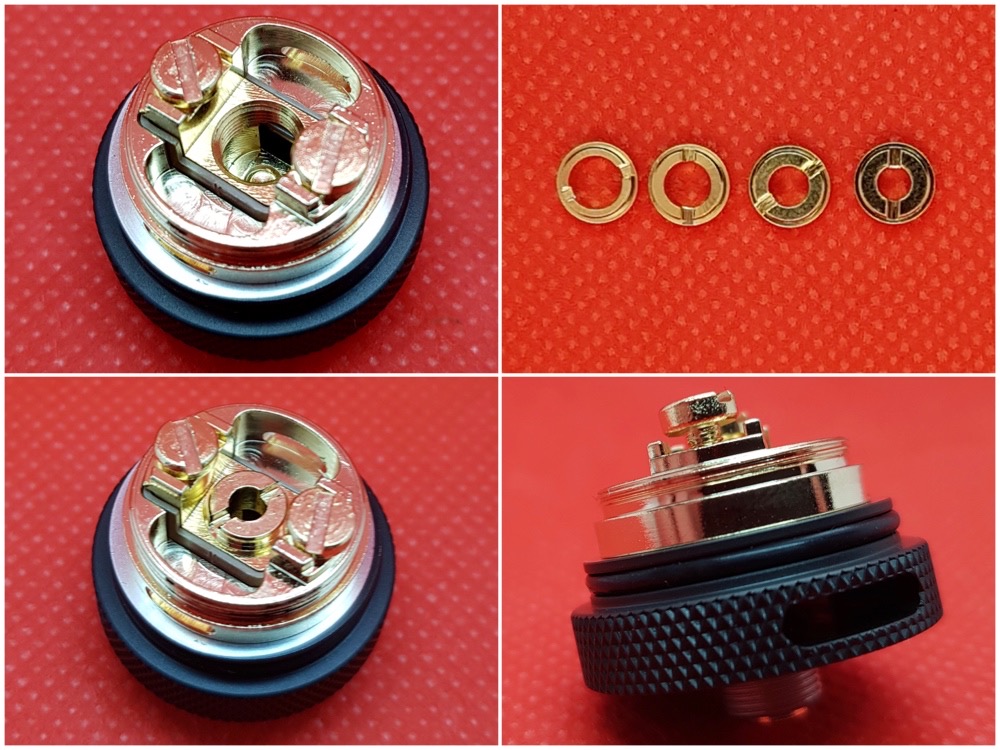 For my first build, I thought I’d see how the deck coped with a simple round wire build and the 3.0mm airflow. Capturing the wire was easy, it is a bit tricky to get in close to the deck to clip the wires to ensure you don’t ground out on the chimney section though. For the wicking, I cut the wick just past the edge of the base, thinned them out and then treated the deck as if it was a dripper by tucking the wicks directly into the wells.

This build came out at 0.8 Ohms, and I was pleasantly surprised at how well this performed at just 24 watts, with a nice restricted direct lung hit and pretty decent flavour. One issue I did come across was that, although the stock drip tip might look cool, it was difficult to get a decent grip on when needing to refill, frequently requiring the aid of a towel to get a decent enough grip to loosen it off. I ended up using the included metal 510 drip tip adapter which is knurled and much easier to use.

For my second build, I decided to see how this coped with bigger coils, and I happened to have some chunky looking coilology wire on a spool (24g x2 with 32g Clapton). This proved much more challenging to install as it barely fit under the deck screws and, as you can see, I could only get four wraps in there which meant the build came out to 0.11 Ohms… I think this is the lowest build I’ve ever used! I still wanted a somewhat restricted draw so partnered this up with the 3.5mm insert. This is right up my street with bags of flavour at 55 to 60 watts. I did need to swap to the taller 5.5ml tank though as this build has a serious drinking problem! 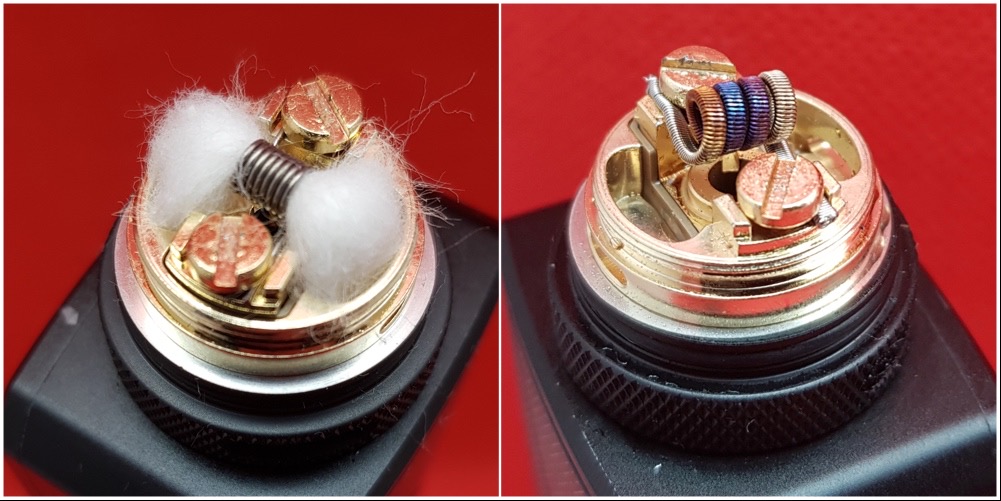 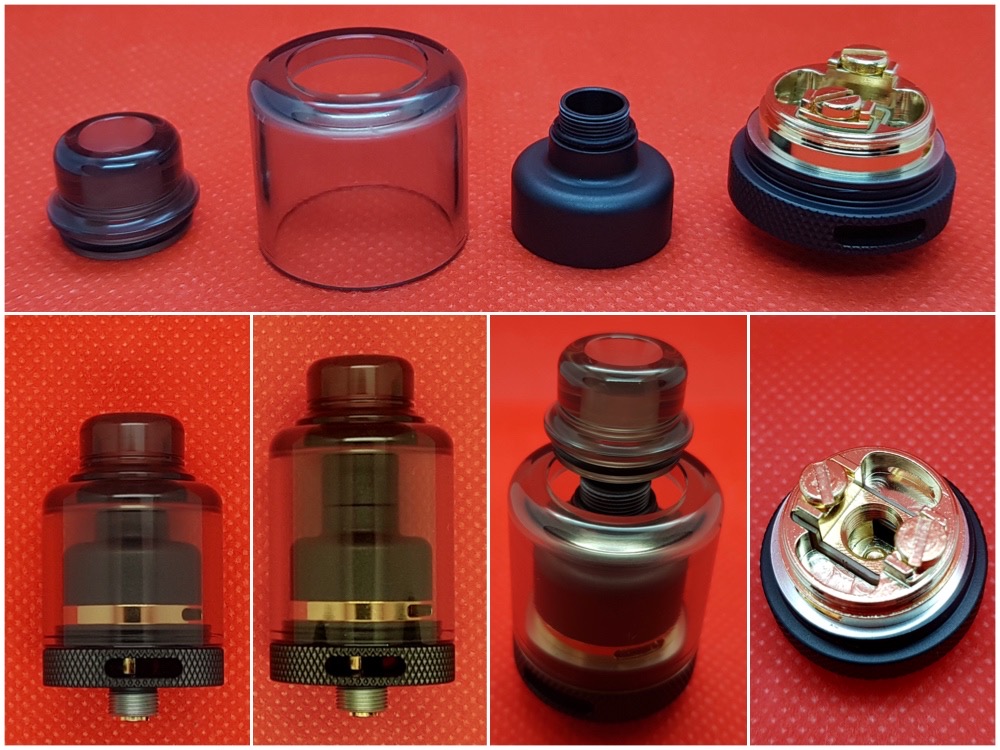 This is a superb single coil rta, but it’s not without its flaws.

We often talk about loss of air pressure under the coil in mouth to lung tanks and sometimes I’m forced to wonder if we don’t take this into enough consideration with direct lung tanks. The under coil airflow inserts solve this issue and I suspect this plays a large part in the performance here. One obvious downside is that once your build is in, you can’t adjust your airflow without completely stripping things right down. Let’s be honest though, most of us use a standard build with any rta and keep the airflow at a fairly consistent setting so once you’ve found the right coil/airflow combination for you, this isn’t an issue.

The deck does somewhat limit the size of build you can get in here as well, smaller lower mass claptons and aliens are probably the order of the day here, but if you’re a direct lung vaper this is well worth seeking out.

Many thanks to Sourcemore for sending the KREE 24 rta out for review, and as always they’ve sent me a discount code for you to use: $17.99 GAS MODS Kree 24 RTA code: KREE 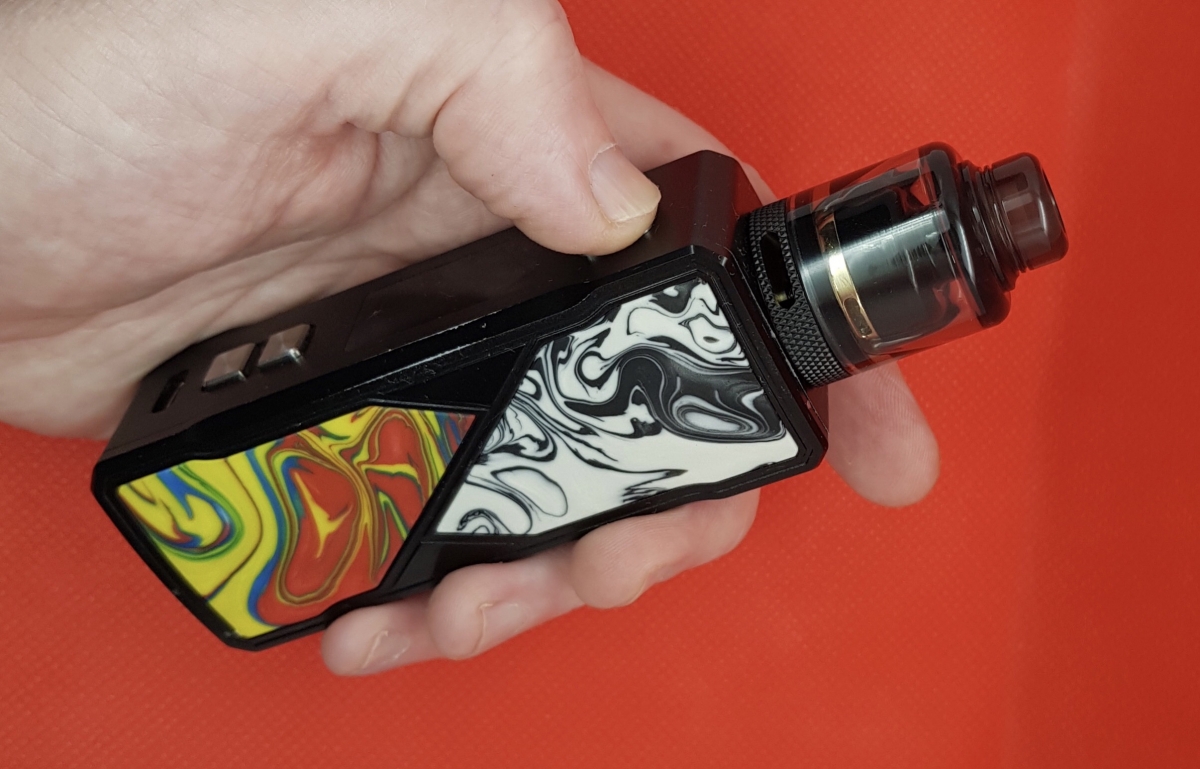