Today for review we have the Exvape Expromizer V5 MTL RTA which was kindly sent to me by VapeSourcing for review.

Exvape themselves call this the “MTL Killer” and say that this V5 tank is a fusion of the V3 and V4 but with some improvements. I have not used the v3 or v5 so all I can do is take this on its own merits, but will it be killer or filler? 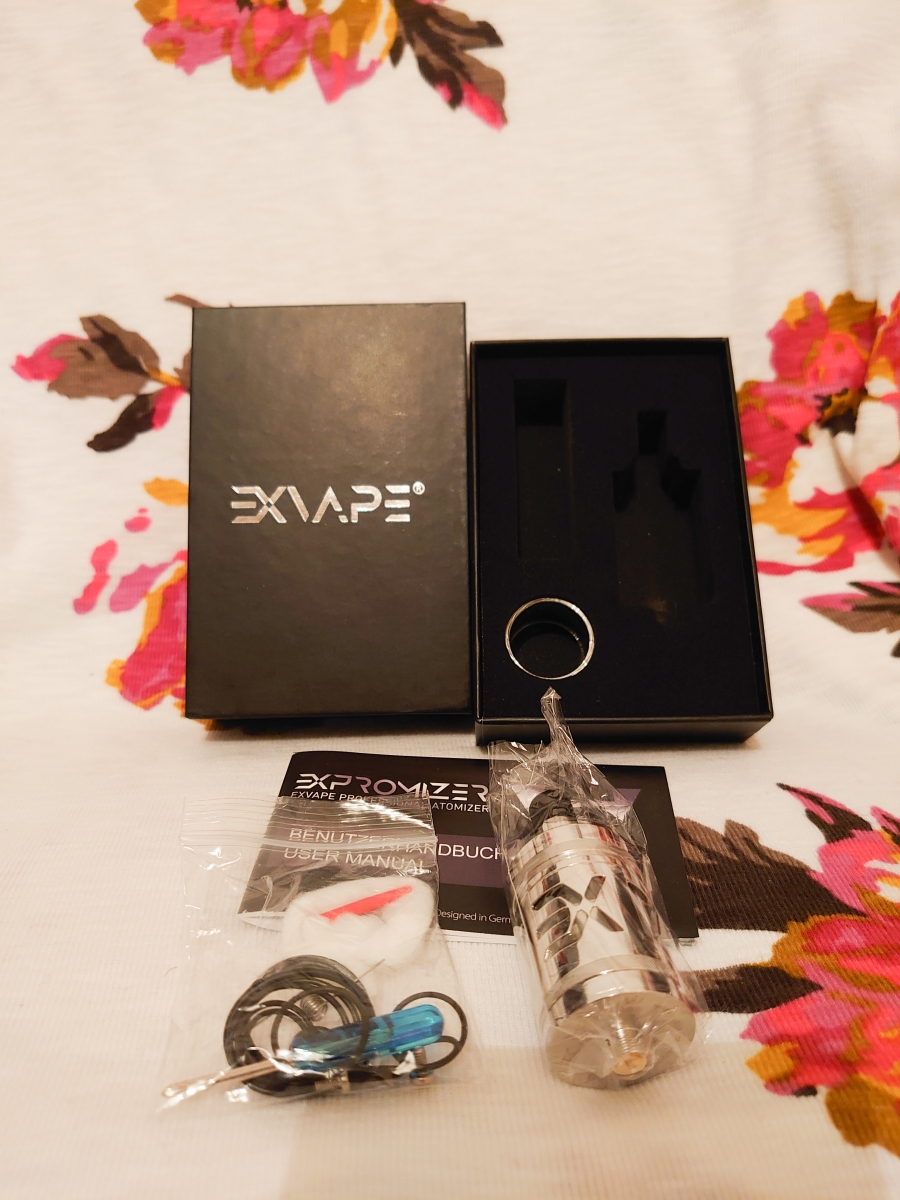 It all comes nicely packaged in a thick cardboard box in a sleeve, and there’s everything you need to get started. The full package contains the tank, a bag of spares (screws, O-rings), spare glass, a coil, a cotton lace, user manual and a small screwdriver which feels like it belongs in a Christmas cracker. The tank is available in five colours – brushed, gunmetal, sandblast, black and the one I was sent, polished.

Taking the tank out of the packaging, you can feel its weight but more importantly its quality. The all round build quality here is outstanding. The tank is stainless steel with pyrex glass and really feels like it could take a knock or two, especially given the cage around the glass. The cage has “EX” in it on either side and two windows through which you can see your liquid level but also the juice flow control ports. The knurling looks good as thin bands running round the tank and provide the grip to twist the tank, the top to adjust the airflow and the bottom one to twist the tank to adjust the juice flow ports – I’ll come on to these later. Whether or not you like the aesthetics of the tank is going to be down to personal preference, but personally I think it’s one hell of a good looking tank.

The drip tip included is standard 510 and is made of metal with the tip being plastic, and the very tip can be screwed off. I wasn’t a fan of the drip tip because I have a real thing about metal drip tips as they make me feel like I’m going to bash my own teeth out and I find them uncomfortable. Luckily the connection is slightly raised and many of my own drip tips fitted fine, but I eventually settled on a drip tip from a Berserker Mini which not only works really well but looks good here too.

The airflow comes in from the top, then down the sides of the bell, then under the deck, and up under the coil. 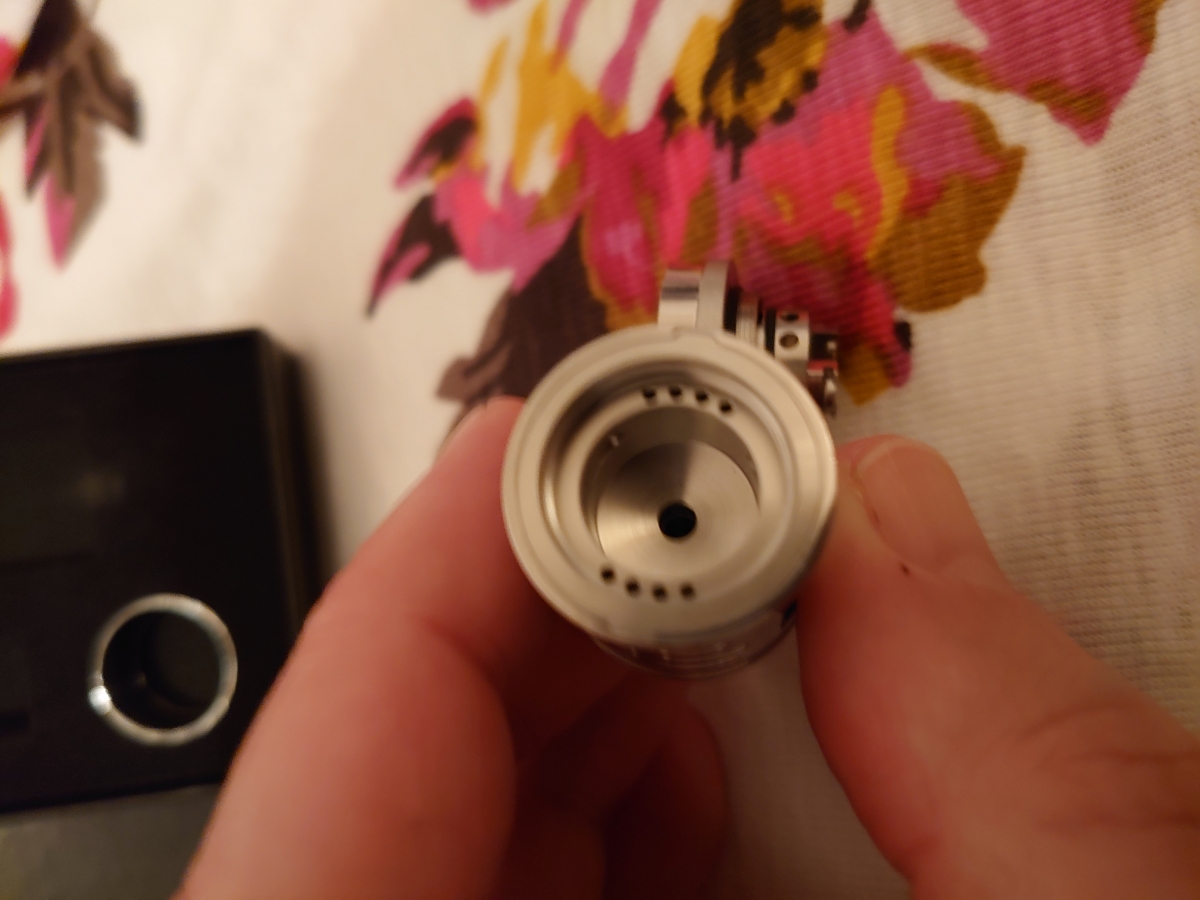 It’s a really clever system and means that although the air comes in at the top, it hits the underside of the coil resulting in no loss of flavour associated with top airflow and also means that there are no leaks. I have had absolutely no leaks at all from this tank. The airflow is adjusted by twisting the top knurling to open or close the flow. There’s a long cyclops hole and 6 x 1mm holes so theoretically there are a lot of airflow options are available.

To fill the Exvape Expromizer V5, you unscrew the top of the tank. Make sure you twist the tank to close of the juice flow holes then twist the top of the tank. Unscrew the top until it won’t turn any more, then look for the tiny etched arrow towards the top of the tank and slide it open to reveal the fill port. The port itself is a decent sized kidney shape, but because it is recessed quite far down from the mechanism and the lid only slides so far back so it was actually quite difficult to fill with larger nozzled or short nozzled bottles, long thin ones work best for filling that hole (that’s what she said!). Still, it works reasonably well and is child-proof. One other thing to note is that after screwing the lid back down, my drip tip had slightly popped up so just push it back down into place. 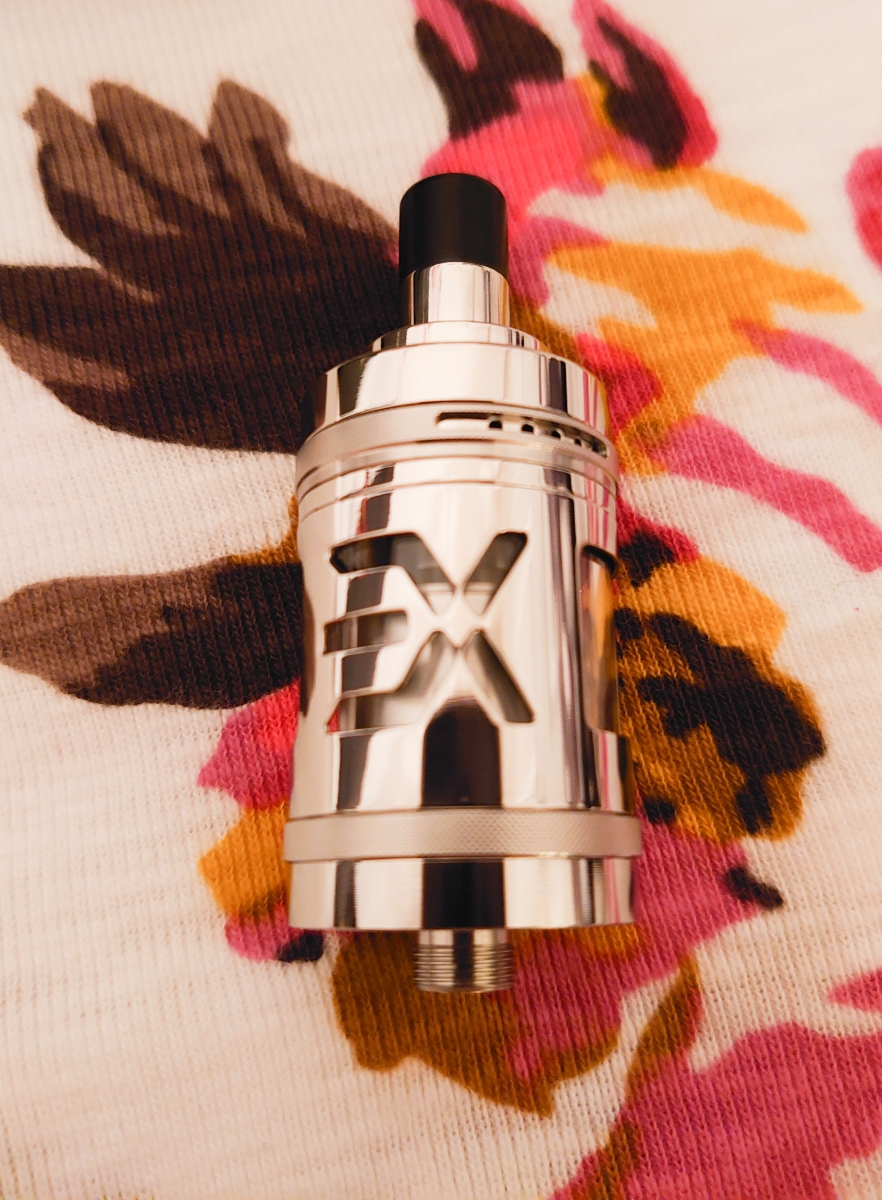 The build deck is pretty straightforward, positive and negative posts opposite each other with three holes underneath where the airflow comes in. Unscrew the post screws and slide the legs of the coil in, and then bend it round the small indent on the side of the post and hold in place so you can screw everything down. These small indents help keep the coil in place while you tighten everything. The tank comes with a 2.5mm inner diameter coil and you can fit a 3mm in there but it’s tight, so I found 2.5mm was the better option. Once the coil is in place, slide your cotton through and then trim in line with the end of the deck and place your wick down into the juice port. Remember to make sure that you cover each of the juice flow ports and you’re good to go. It’s a really easy tank to build and wick, and I never had any problems getting the coil or wicking right as it’s pretty forgiving. You’re not going to get any leaks but you can flood the deck if you don’t cover the juice ports properly as I found out, but it was an easy fix to unscrew the deck and adjust the cotton slightly.

The juice flow can be adjusted by twisting the whole tank, and it spins to reveal the juice flow holes in the viewing window. I found that for 50/50 liquid having two holes open works best, and for 70VG/30PG then having all three open is the optimal position. One issue I found is due to my large but beautiful hands, if I screw this onto a mod quite tightly then, because there isn’t a large gap between the bottom knurling to turn the tank and the base, I struggled to get the tank unscrewed from the mod, the tank just spun round so when screwing onto a mod, do it until it just catches and no more.

The coil that comes with the tank came out at 0.76ohm and I’ve also used a 0.74ohm MTL Clapton coil and a simple Kanthal coil 3mm in here with no issues, and personally I found the 2.5mm coils to be slightly better. The flavour from this tank is really, really good, it’s superb in fact and a really nice vape indeed. The airflow opens up to a loose mouth to lung. You’re not going to get an RDL vape from this unless you want it really restricted, but for me it’s still mouth to lung. I’ve been vaping this with all the airflow fully closed off and it’s a really nice, smooth, flavourful draw and one that I have been really enjoying. However, I wish the draw could be closed off a touch more to provide a slightly tighter draw. If it closed off that bit more, then this would be an ideal vape for me. That’s not to say that it’s really loose, it’s not, it’s quite a tight draw just not tight enough for me. 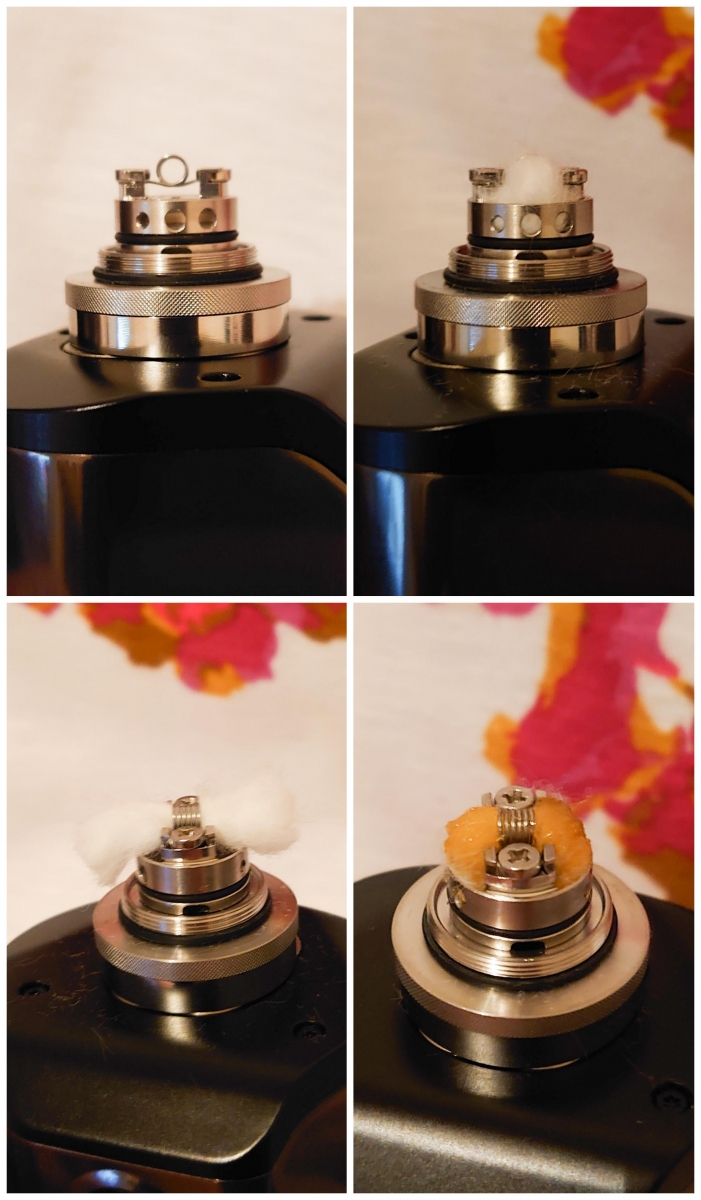 Some people won’t like the look of this tank but I think it look superb, and irrespective of whether you do or not, there is no denying the build quality is top notch. It all looks great, it’s well machined, well made and I cannot fault it. The deck is easy to build on and is pretty forgiving. It’s leak proof, the flavour is outstanding, and with the airflow closed it’s a lovely smooth draw. It’s not without it’s niggles though, tighten it on a mod and you may struggle to get it off, the fill port is too recessed for some bottles, and it just doesn’t close off the airflow quite tight enough for me.
Overall I’ve been really impressed with the Exvape Expromizer V5, and it’s a tank I will continue to use on a daily basis. It’s designed in Germany so if I had to rate it I would say Nine rather than Nein and that it’s a current vape, not an Ex-vape. 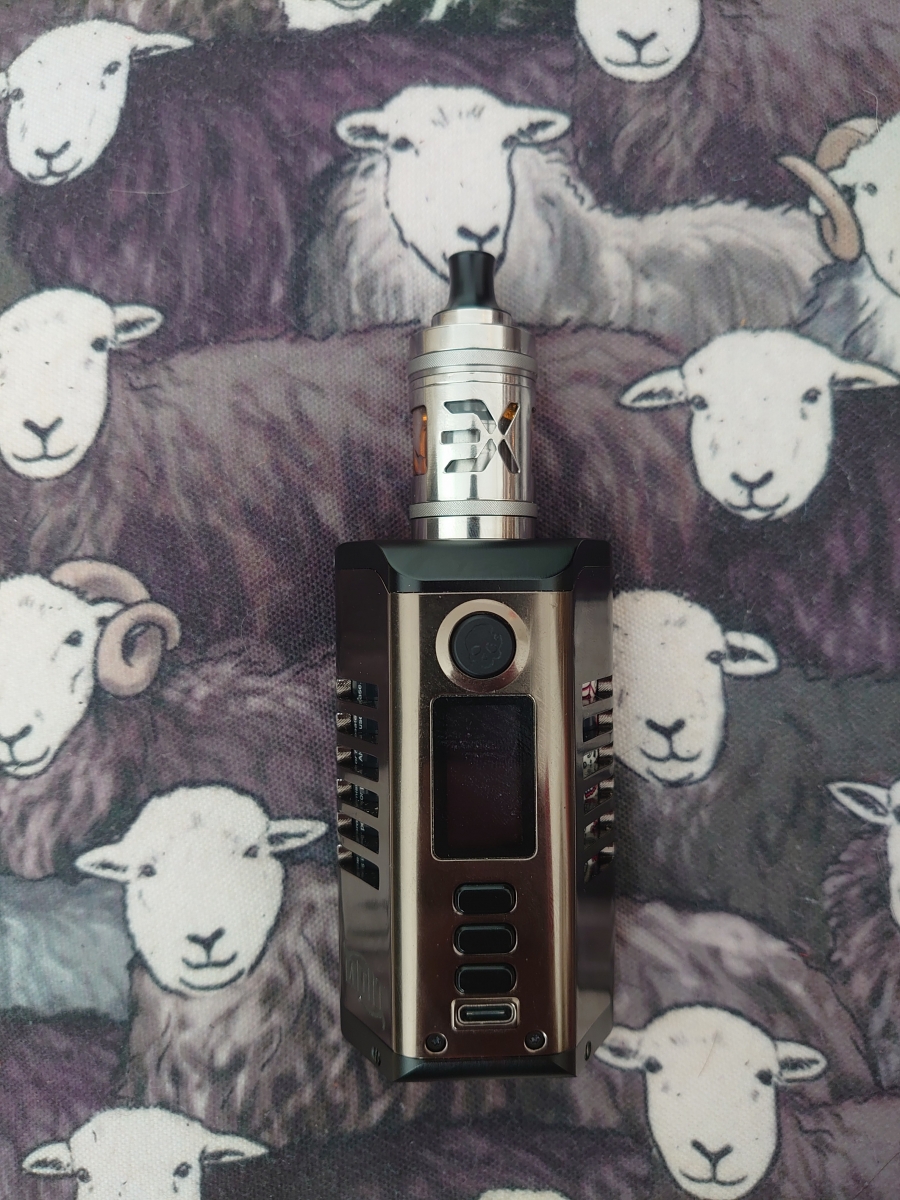