Our friends over at Healthcabin have been kind enough to send out the Dovpo Blotto Single Coil RTA for review. I’ve used the Blotto Mini before and I tend to use that in single coil mode, but in reality it’s really just a smaller version of the original Blotto RTA with the same dual coil build deck, so I was very interested to see how the new Single Coil version would perform as this has been designed as a single coil version from the outset. 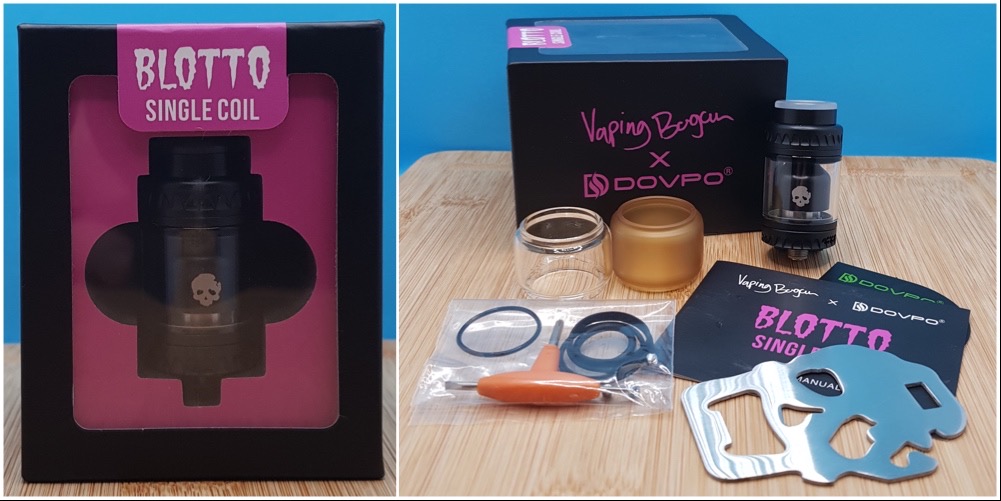 The Blotto Single Coil is currently available in Black, Gunmetal and Stainless Steel, and Healthcabin sent over the Black version for review. This comes in the Vaping Bogan’s signature black and pink packaging (he sure does like his pink!). The Blotto Single Coil comes with a straight glass installed and you get a very generous two bubble tanks included as well (one glass, one yellow PCTG) along with a baggie of O-rings, a tri-tool, and the Vaping Bogan coil tool/bottle opener. You’re supposed to use the coil tool/bottle opener to measure your coil legs but I found this had several sharp edges so opted to throw it straight back in the box and use a generic coily style tool instead. 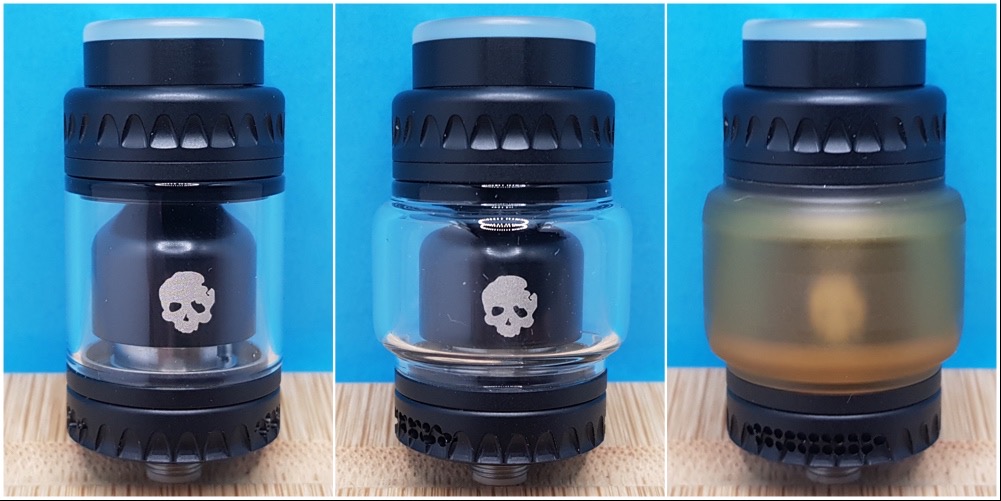 The design of the Blotto Single Coil follows the same design language as the two previous tanks with a bottle cap motif on the top cap and airflow base along with a fairly beefy 810 drip tip. With the straight glass installed, it’s 23mm wide but this bulges out to nearly 28mm with either of the included bubble tanks installed. As this is only a single coil rta, I opted to go for the straight glass as this gives the atomiser a cleaner look, it’s nice to know that I have those two extra bubble glasses available though.

Whilst changing the tanks over for the photos, I found that the straight glass was initially very difficult to remove, so much so that I was worried that I was going to break it, but this appears to have been down to dry O-rings and it’s not been an issue since. If the worst happens, it looks like replacement glass packs will be available later should you manage to break all three (sounds like a challenge!). 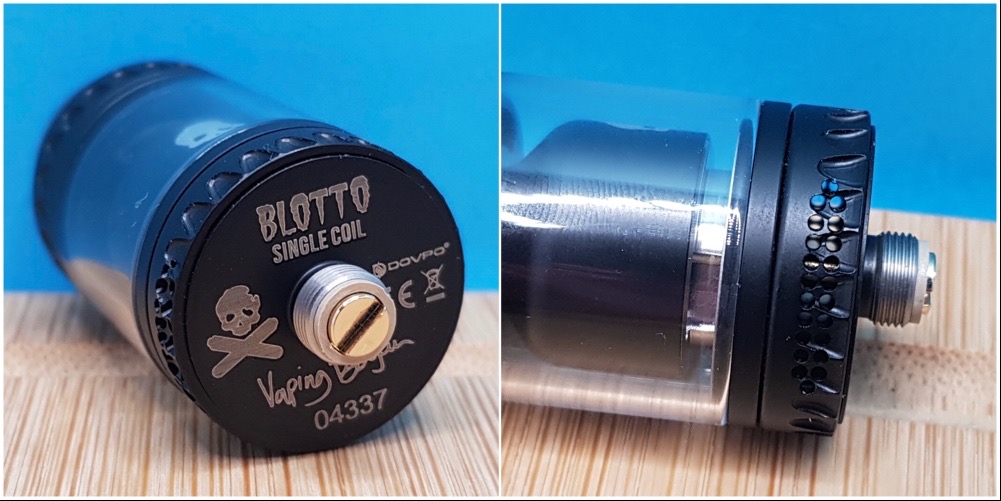 As the Vaping Bogan is a fan of mech mods, it should come as no surprise that this comes with a fully hybrid safe 510 pin once again, with a protruding positive pin which is fully isolated from the negative threads. The honeycomb airflow has also been copied over from before, the base/afc section has apparently been beefed up from earlier releases, presumably for reliability reasons, but I was disappointed to find that the airflow control is still non removable and it’s still as difficult as ever to see how much you have the airflow open, luckily it never budges in use though once you’ve got it set to your liking, giving smooth diffused airflow throughout the full range. 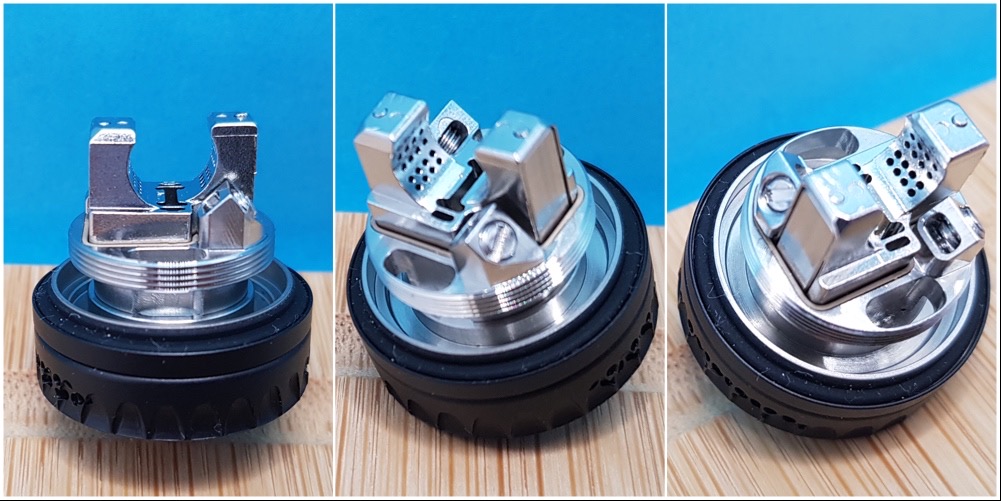 The build deck is much tighter this time and has been designed to deliver 272 degree coverage over your coil with a large slot under the coil and honeycomb airflow coming from either side. The airflow posts now have an “improved metal back” where the earlier Blottos had peak (a plastic) running down these areas, and I’m guessing that people were melting them by being a bit over enthusiastic when dry burning coils in the past! 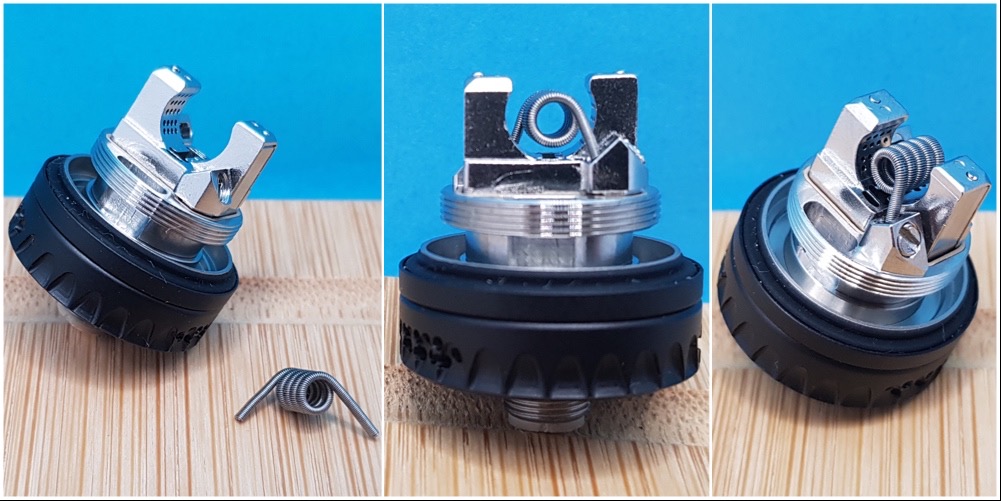 I opted to forgo my usual round wire build this time and went straight to a fused clapton, but for those of you that do still use round wire builds I tested this with a piece of scrap wire and there were no issues capturing the wire so this shouldn’t give you any issues. It’s best here to have your coil wound clockwise with the legs coming out 90 degrees from each other as shown (you can use anticlockwise coils and install them with the legs down rather than up if that’s what you have to hand). I cut the legs to 4.5mm as indicated with the included tool, but in hindsight 5mm may have been better as I had to use a coil rod to lift the coil legs slightly whilst tightening screws down to achieve what looked like the optimal coil position. 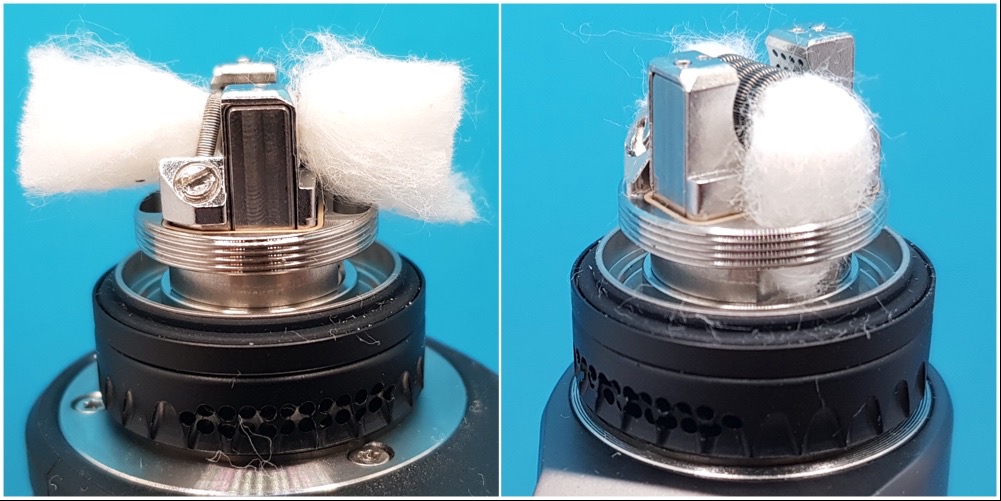 Wicking was easy, you want enough cotton to just dip below the raised GTA deck as shown above. Even with the straight glass installed, this proved to be sufficient with plenty of bubbles being produced and no issues with air getting trapped between the deck and the glass.

I’d used the included Blotto drip tip before but somehow didn’t find myself enjoying it this time around so I went with my own 810 tip. Once I found something more to my liking, the search was on for a matchy matchy mod to go with it and I settled on the Hotcig g100.

With my 0.26ohm Kanthal fused clapton in here at 53 watts with the airflow about half open, this was pure heaven. The flavour is very punchy for a single coil rta, and it most definitely beats my Blotto Mini running in single coil mode.

You’ll notice that up to this point of the review there’s a glaring omission, the top cap and filling, but there’s a good reason for that. The day before I received this, the Vaping Bogan released a video explaining that some people were experiencing leaking with the Blotto Single Coil along with a possible solution. Armed with this knowledge, I decided to use the RTA as supplied “out of the box” first to see what happened.

The top cap is very easy to remove with just a quarter turn and this reveals two fill ports, these are actually fairly small and recessed into the top of the tank so I found I had to take a little more care than usual when filling. If you use larger bottles, then you may find this challenging. Everything went fine for the first couple of fills, but on my third fill disaster struck and the Blotto Single Coil promptly dumped a full tank of e-liquid! Opening the deck revealed that the pressure caused when putting the top cap back on had physically pushed one of my wick tails out of the wick port which is exactly what Bogan had covered in his video. 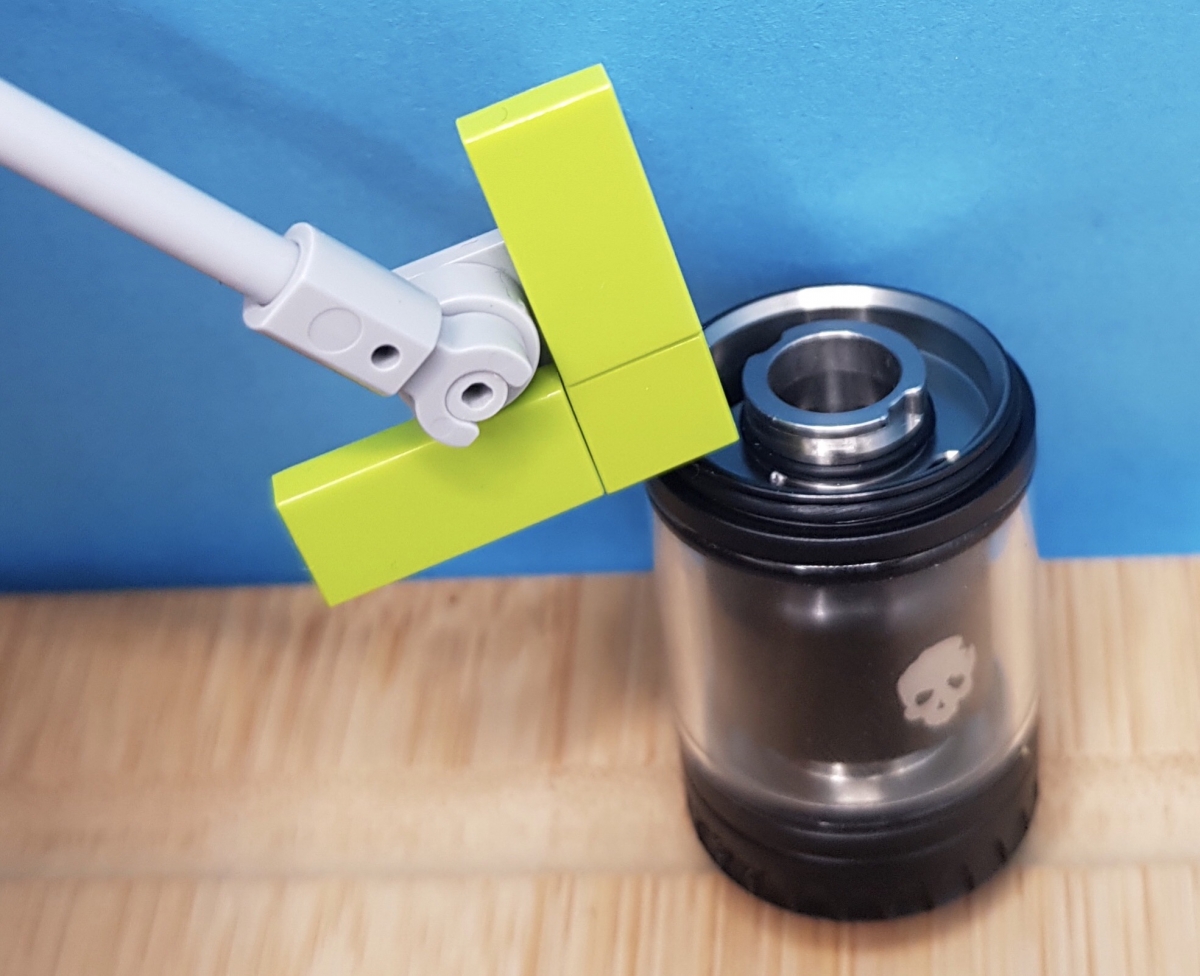 Luckily there is a simple solution, simply remove the small O-ring around the chimney shown above and this should solve the problem, in Bogan's own words “it doesn’t seem to serve any function”. With the offending O-ring removed and the wick put back into position, the Blotto Single Coil has been dry as a bone for days on end.

This is a great single coil RTA and it’s definitely better than running my old Blotto Mini in single coil mode. Aside from needing to remove that O-ring, something I’d probably recommend doing as soon as you take it out of the box, then I can’t really find much fault with the Blotto Single Coil RTA and I’m sure it will become another firm favourite.

Many thanks to Healthcabin for sending the Dovpo Blotto Single Coil RTA out for review.