I’m always up for something a bit different, and the Torch RTA certainly is that. It has multiple built in LEDs in the base that colour change as you vape, but is the RTA any good? Let’s find out… 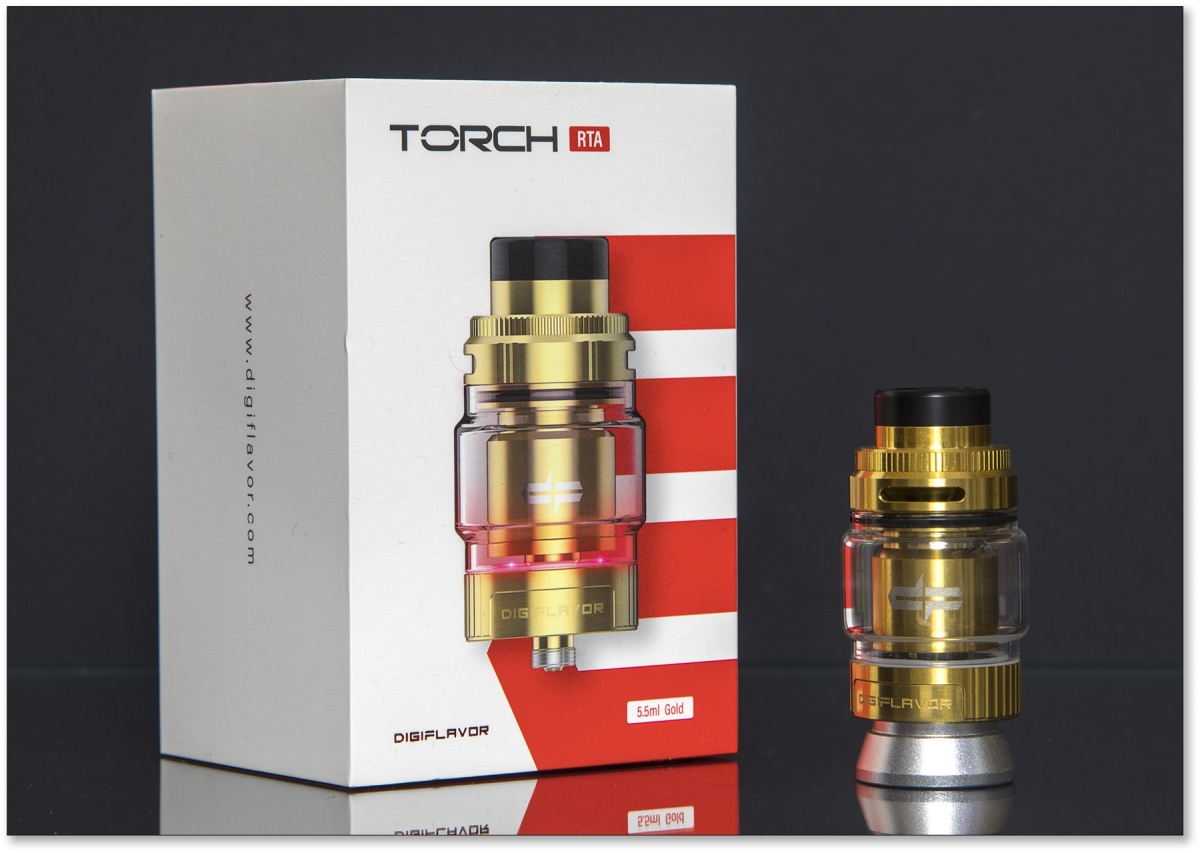 The Torch RTA comes packaged in the traditional Digiflavor white and red outer sleeve showing your colour choice and contents on the back, along with a few specs. 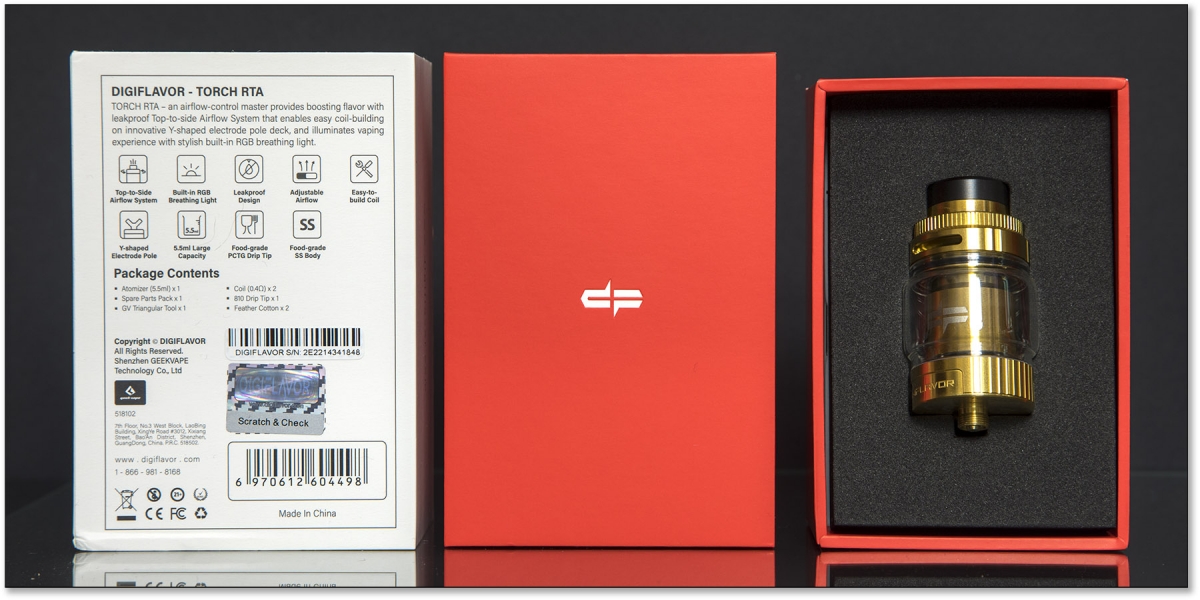 The red two-piece box is postman proof and well laid out, the top layer holds the Torch RTA, and underneath that is another box holding the extras.

There are plenty of spares but no spare or straight glass option. There’s an additional 810 drip-tip and 510 drip-tip adaptor along with a bag of spare seals and screws, there’s supposed to be two coils included although mine were missing, but the cotton was there. 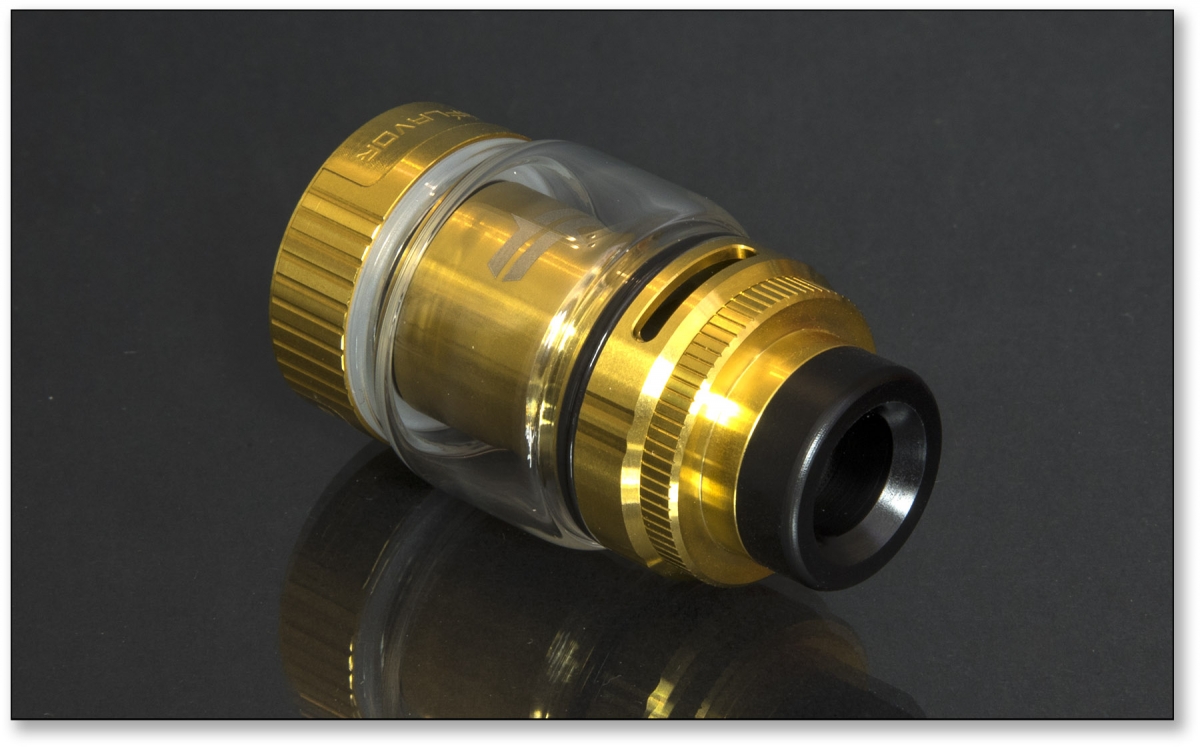 The design is clean which makes it easy to match up with most mods, I chose the gold for a reason as I needed something plainer for my much loved Wismec RX5 mod, and Digiflavor tone down the gold nicely. 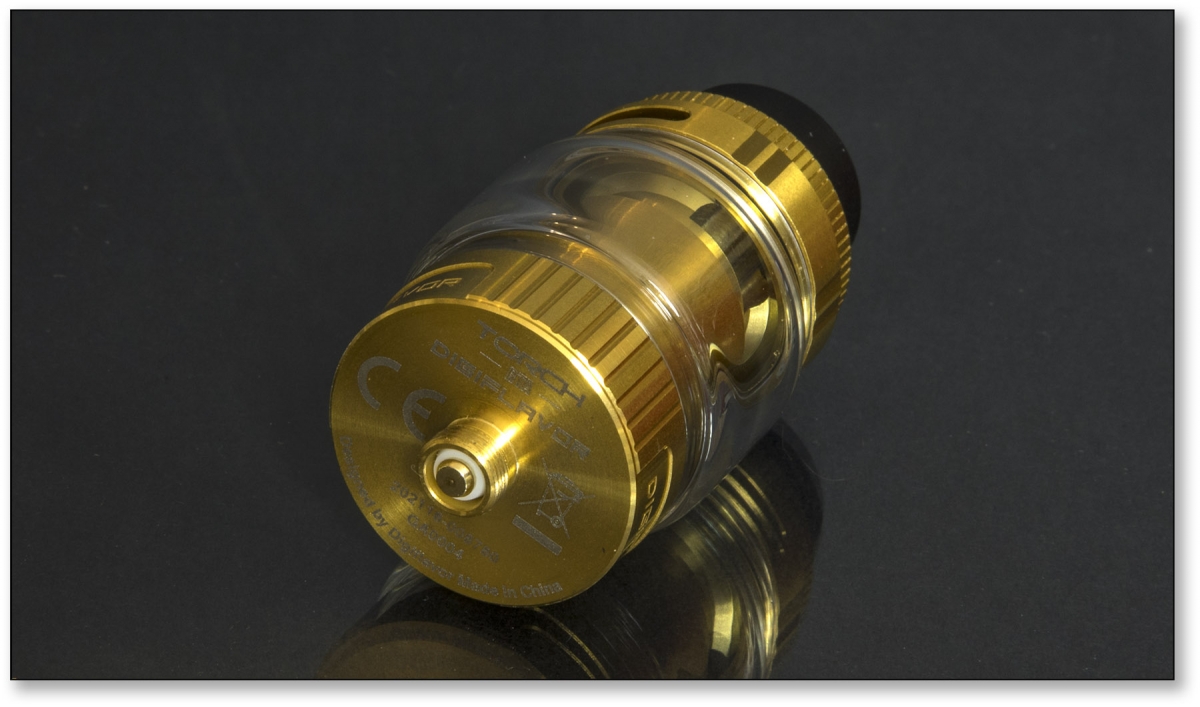 The diameter is 26mm at the base and 55mm tall including the drip-tip, the capacity is 5.5ml and it comes in black, blue, gold, gunmetal, silver or rainbow.

The RTA strips down easily by unscrewing everything and it is easy to clean. The separate chimney piece is interesting and comes in handy for checking your build for shorts. The fill cap is just under a half-turn to unscrew, and the airflow ring slips off for cleaning.

Lobbing a build in…

Since the coils were missing, I chose a couple of fused claptons with a 3mm inner diameter. Due to the Y-shaped deck, it got a little fiddly. I found the easiest way to get the coils roughly into place was to kink over the legs to stop them hitting the base. 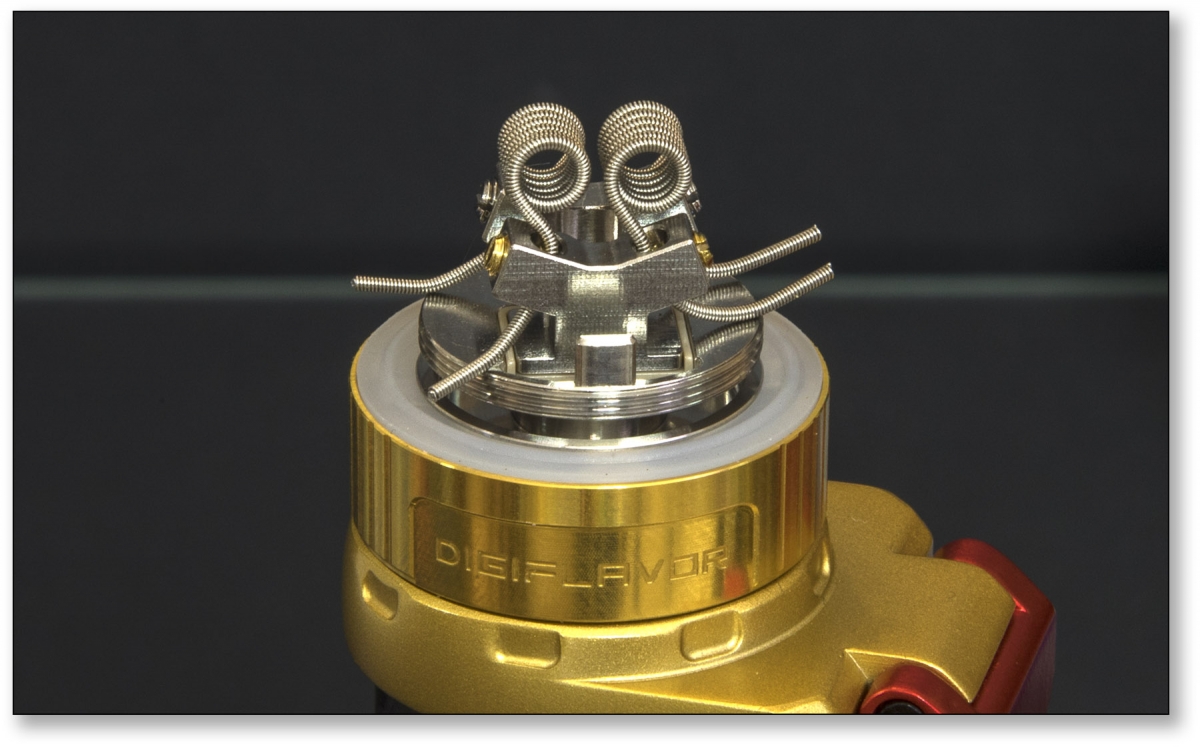 Once you have them in and tightened up, then tweak the position and spacing before trimming the legs just in case you need to raise or lower them. Trimming was easy as there’s plenty of access.

The chimney came in handy to judge where the airflow will hit the coils and also to ensure your coils aren’t too high up as this may cause a short, I just popped it on loose and test fired it. 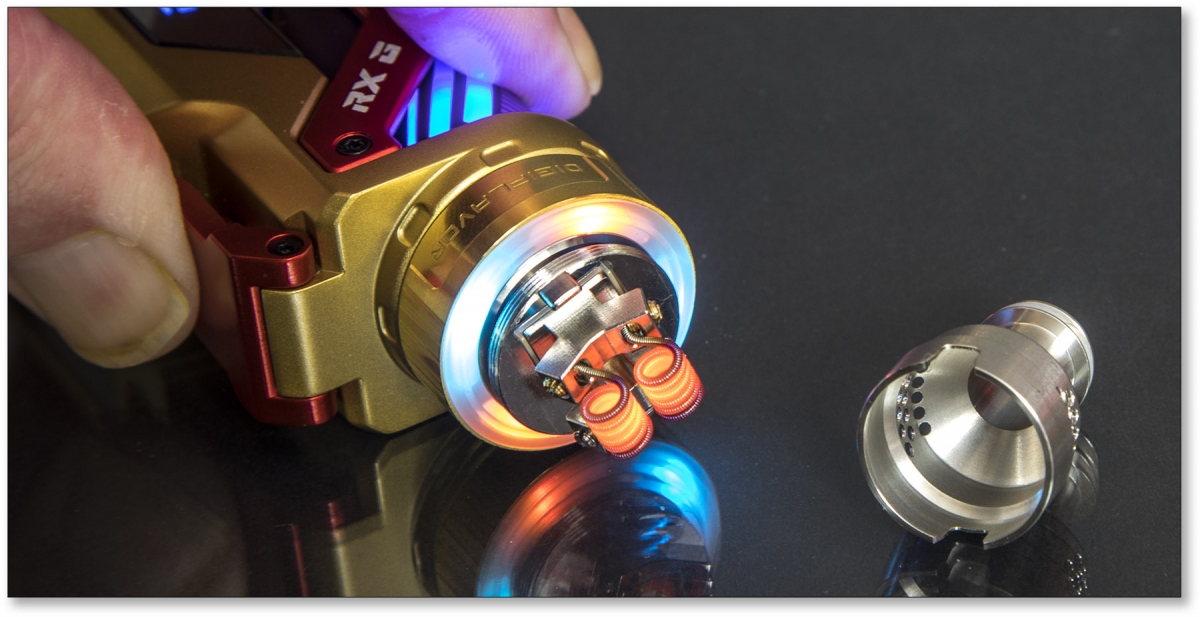 With that done, I pulsed the coils and checked for hotspots. Since I slightly spaced my coils, there were none and they heated up evenly so it was time to wick. 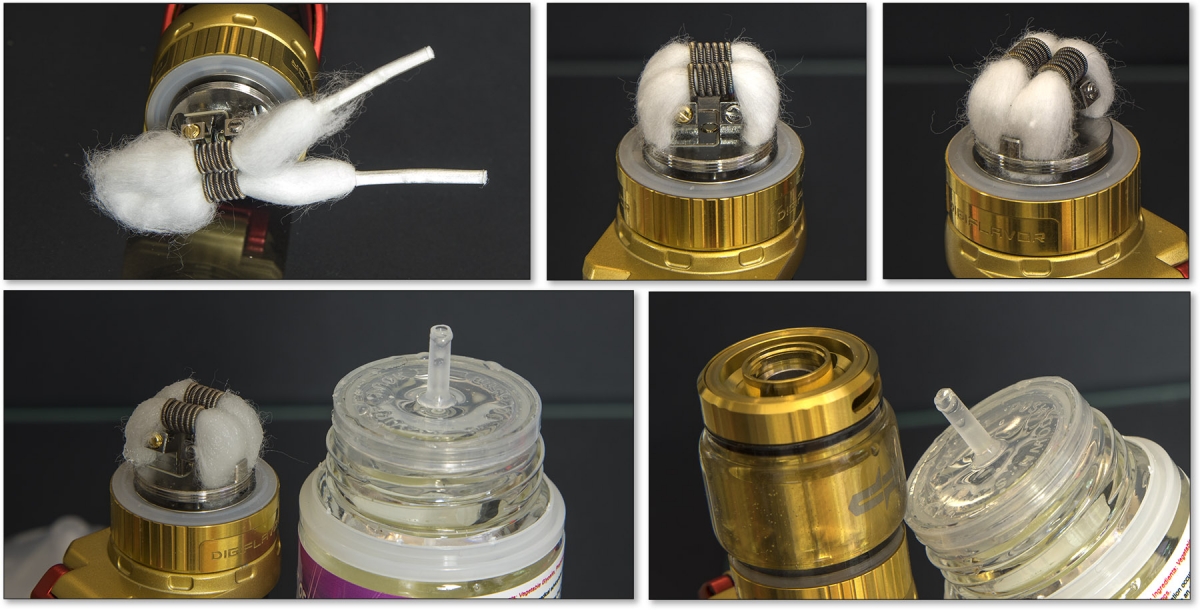 You can just about get away with using one wick but there’s very little to spare so cut close to the shoelace ends and fluff the wick out. The wick legs are quite long and need to tuck through the wick port, the port was wide enough to comfortably tuck the cotton through without thinning out. You should just be able to see a little cotton poking out underneath. Also make sure the cotton is tucked behind the location tabs.

Prime up your coils by pulsing juice onto the coils until the wick is well saturated and screw it all back together. That chimney piece can either be pushed up into the tank or loose over the build deck, it will all make sense as you assemble it though. The filling ports were a little narrow so I couldn’t get my standard shortfill nozzle inside so be a little careful when filling. 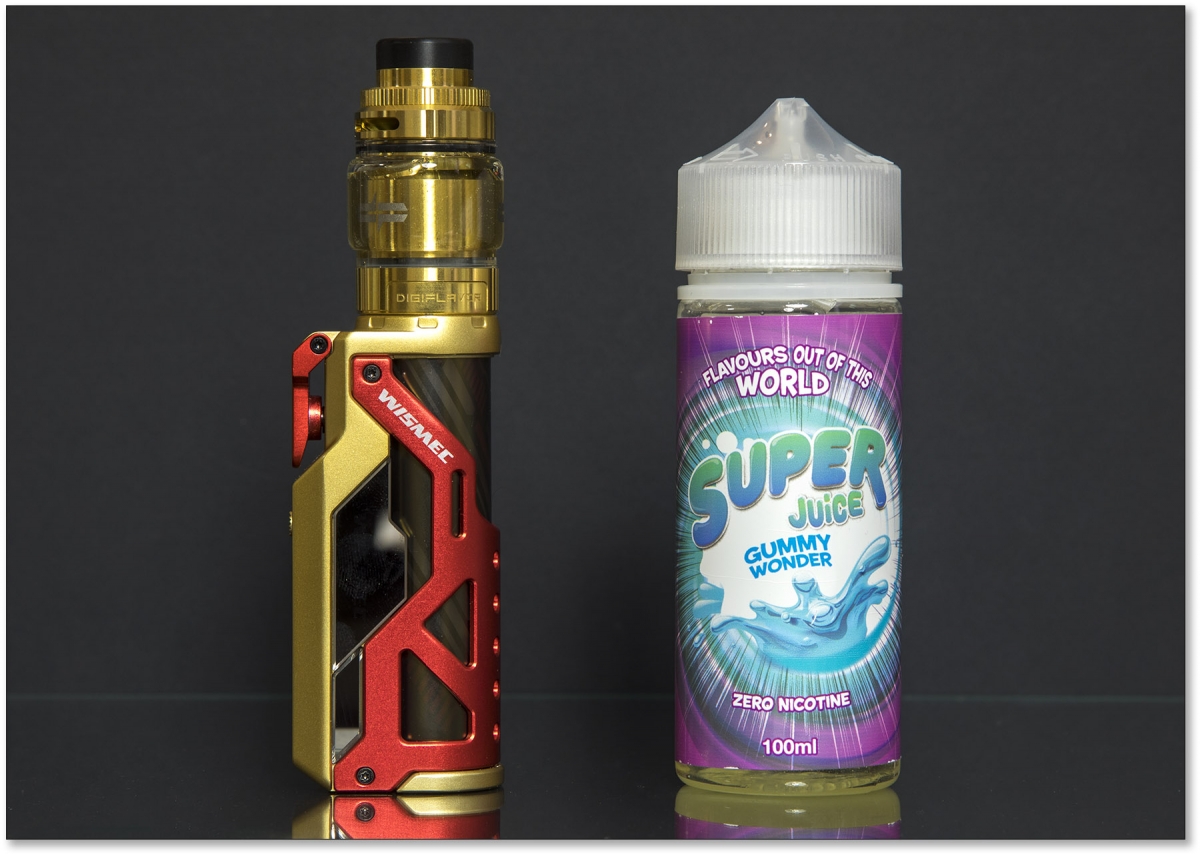 So all juiced up and ready to go, and the first time to see lights/camera/action….

The vape was pretty good, a typical dual coil hard hitter. The airflow felt slightly restrictive, and the flavour was good but not exceptional. I was expecting something like the OXVA Arbiter 2 but the Torch wasn’t quite as good as it felt more restrictive.

I can’t judge it too harshly as I used different coils than intended so I will use some Ni80 Alien style coils next time and play around with the height and centre gap.

I’m not giving the Torch the thumbs down by any means and I am still happy with it, I just think there’s more to it as I experiment with different builds, but even this build will do me nicely for my setup. I already prefer this to the Dovpo Blotto and a few other tanks that this will end up replacing.

Have you got a light mate?

As it happens I have indeed! So, let’s cover what will be the deal maker or deal breaker for some. The LEDs light up and colour cycle for as long as you fire your mod, the brightness appears to be relative to your wattage, so anything under 25 watts barely lights up, but at 65 watts they were pretty bright.

The photos don’t quite do it justice, it’s much brighter in real life. The effect of the LEDs up-lighting through your juice and glass is fascinating, it properly colours your e-liquid and you see it in your peripheral vision. Naturally I had to go out and test it at night time and it reminded me of one of those garden lights but brighter.

For the record, I enjoy lighting and LED stuff. One of my hobbies is electronics, and I’m always playing with lighting stuff up with LEDs so the Torch RTA appealed to me, but I’m not quite sure I would vape this in public as it certainly attracts attention, "oooh look at me vaping" isn’t my style, but at home and out in the garden I like it and the soothing effect it gives. Whether it’s for you or not, I’m sure some vapers will love it, a festival vape for example.

Be aware that the LEDs cannot be turned off so if the lighting annoys you, then you’re stuffed.

Bottom line; I like this RTA and the gimmick lighting. I think I can get more flavour from it yet but it’s pretty good as is. I’m all for something a bit different, and I’m glad the Torch is now in my collection, though I expect the market will be narrow for an LED RTA.

I’m reserving my score until I put the intended build into it but I expect it will be close to 8.5/10 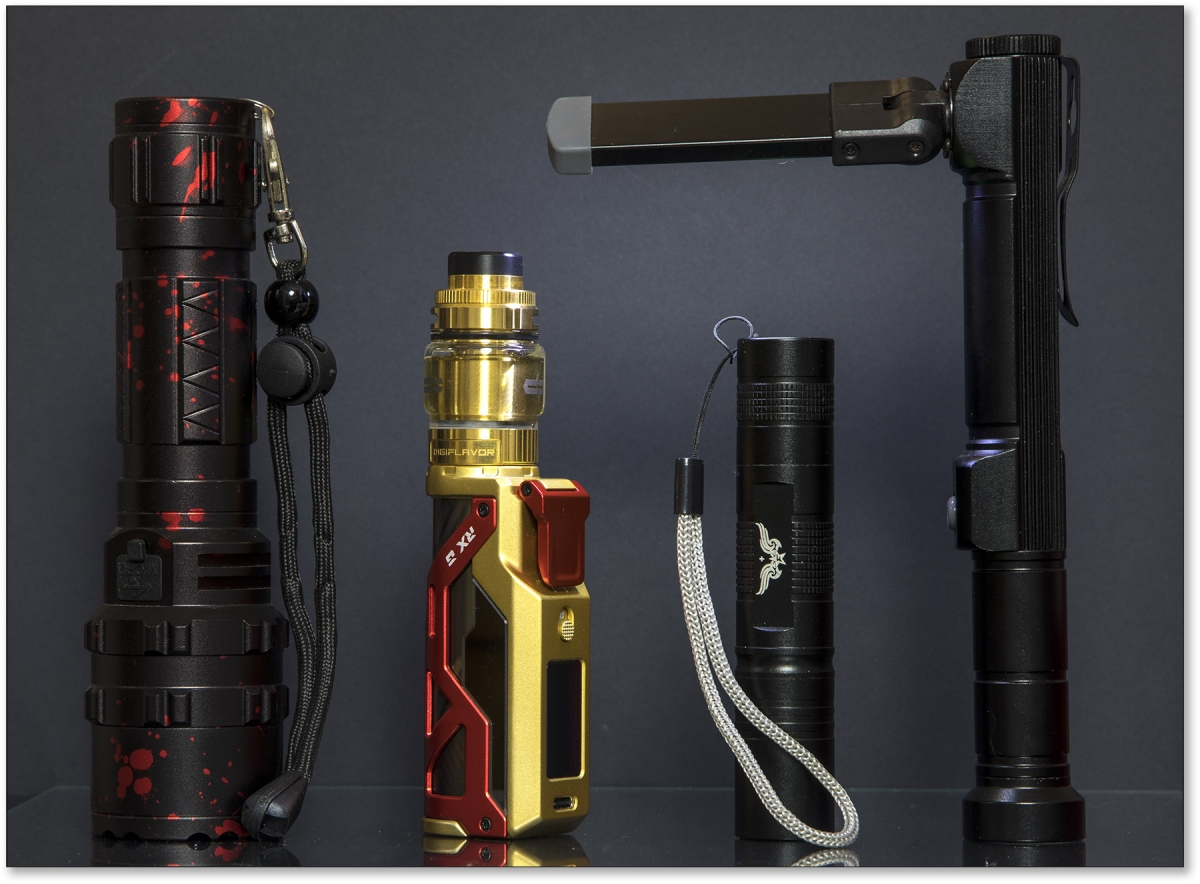