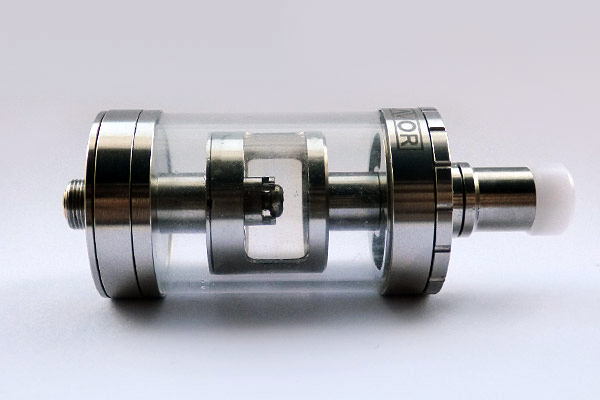 The Digiflavor Siren GTA (Genesis Tank Atomizer) is a single coil tank designed for mouth to lung vaping. It is offered in either 22mm or 24mm diameter and depending on which one you purchase has either a 4ml or 5ml capacity. Much like the Digiflavor Fuji the Siren is a hybrid design that incorporates a Genesis style wicking arrangement but still has all the common features you would expect from an RTA.

The Siren features a convenient top filling design, fully adjustable airflow and includes two different drip tips. These days mouth to lung users sometimes seem to be forgotten by manufacturer’s so it’s always nice when something comes along that specially caters to them. So let’s take a good look at the Siren and see if it delivers the goods!

A user manual is not included which won’t bother anyone who is used to RTA’s and to be honest it is very straightforward. However I still feel it is something of misstep since Digiflavor should consider absolute beginners to rebuidable tanks who ideally should have all the information readily available to them.

As I mentioned earlier the Siren GTA is available in two variants, either 22m or 25mm diameter. I decided to get myself the 25mm version since I have far too many 22mm tanks and I thought the Siren 25 would look more fitting on my Lost Vape Therion 166. The slightly larger 5ml capacity was also another influence on me.

The Siren 25 GTA is nicely constructed and all of the parts fit together well but the threading can seem slightly crunchy in a few areas, namely the top cap on the tank that I received. Nevertheless considering the fairly low price of this atomizer it is certainly something you can live with. The glass seems to be of a good thickness and you do get a spare glass tube in the box should you ever have an accident.

Apart from the diameter and the capacity the only real notable difference between the Siren 22 and the Siren 25 is the build deck chamber which is made from Stainless Steel and Pyrex on the 25mm and entirely Stainless Steel on the 22mm. 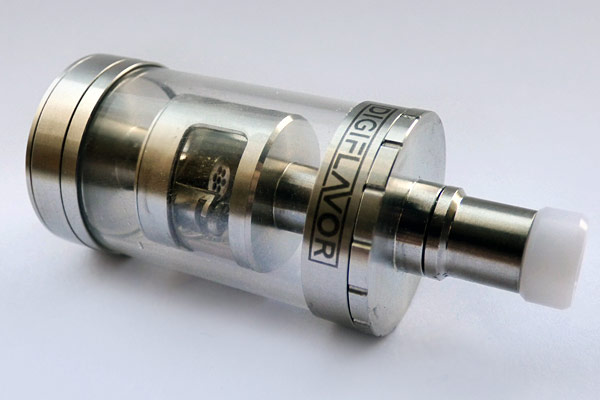 Just like the Fuji GTA the Siren uniquely has the main chamber and deck positioned half way up the tank. The chamber design is highly reminiscent of Geek Vape’s later model Tsunami RDA’s which feature a glass window to enable you to see your wicking and coils. In theory and purely in terms of aesthetics it is a nice idea that looks good but sadly it is not practical because after one or two vapes you will find it a real challenge to actually see your cotton or coil due to the sheer amount of condensation.

The build deck is nicely designed and the two posts have small notches that assist you when inserting the coil wire. The posts feature top mounted Philips head screws that work well and hold the wire securely. Fitted directly over the main airflow hole is a removable (in case you want an airier draw) airflow reducer which is designed to tighten the draw and prevent leaking. According to Digiflavor there is an oil film inside this reducer that is meant to stop any juice or condensation leaking out of the chamber. Please note that if you happen to flood the chamber this leak prevention system will be completely useless. The two wicking slots are huge and you will need a lot of cotton filling them to prevent any leaks.

The pre-fitted drip tip is made from Stainless Steel and features a small Delrin tip to minimise the amount of heat that reaches your lips. Personally I felt that it was a bit too long and rather too airy for a tank that is designed for mouth to lung vaping so I swapped it out for included black Delrin tip which has a far narrower bore. The drip tip fitting is a standard 510 connector so you can use any appropriate drip tip from your collection. 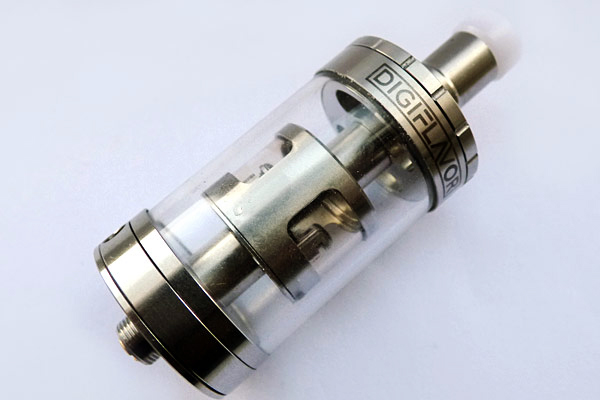 The airflow control ring is simple to adjust and you have a choice between four different air hole sizes. Each setting clicks nicely into place so you don’t have to worry about it accidentally being knocked out of position.

Even though this tank is intended for mouth to lung vaping I did find that I could get a very restricted lung inhale with the airflow completely opened up and I suspect this could potentially become even airier if I were to remove the airflow reducer. As you switch to the smaller air holes the draw does become much tighter but I personally felt that it only seemed right for mouth to lung on the two smallest settings.

In my opinion the Siren 25 GTA should ideally have had another even smaller air hole because the smallest setting may not be tight enough for some mouth to lung vapers who prefer an extremely restrictive vape however you can get around this by fitting the narrow drip tip and setting the last hole to only half way open at which point it becomes a very tight draw. 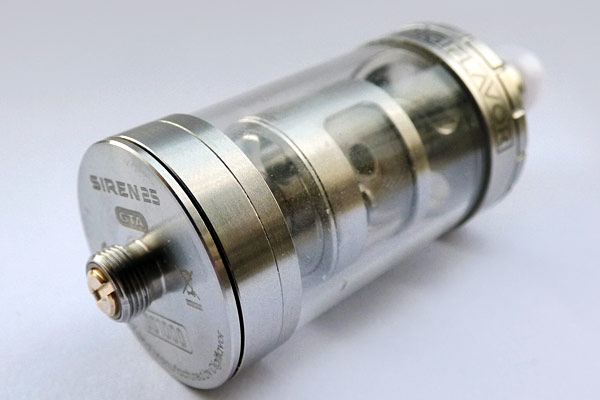 Building the Siren 25 GTA is a straightforward affair and this it only requires a single coil it will be very approachable to a rebuildable newcomer. The screws work well enough and hold the wire securely. The only thing you really need to be mindful of is the amount of wicking that you use and I would advise in the case of this particular tank to use quite a lot of cotton. You need to have those two very open channels filled up with cotton or the tank will heavily leak. In addition you need to make sure the cotton is not touching the airflow diffuser or juice droplets may seep into the airflow. 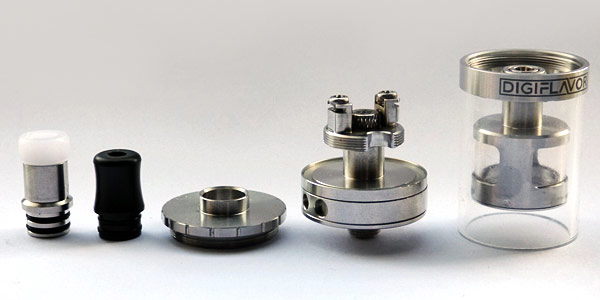 As for the length of your cotton tails I cut mine just slightly past the chamber because you really don’t tend them hanging halfway down the tank or resting on the base.  You shouldn’t get a dry hit because the wicking is very efficient and they will get constantly saturated as you tilt the tank towards you when taking a vape.

Top filling is convenient and you simply have to unscrew the top cap to access the two large fill ports which can accommodate your juice bottle nozzles or droppers. 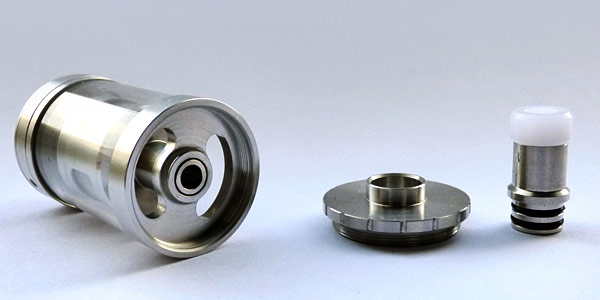 Dinner Lady Lemon Tart was the first E-Liquid that I used in the Siren and it was an extremely good vape with the lemon and pastry both being highly noticeable and beautifully balanced. 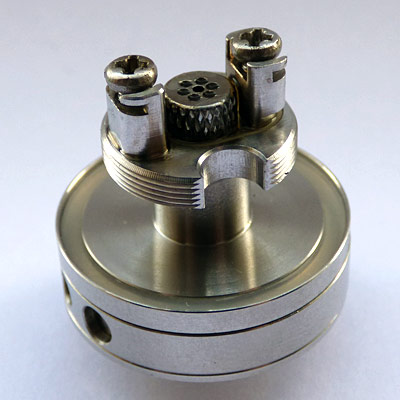 I moved on to try another juice and filled up the Siren with some of Grey Haze’s custard which is a real favourite of mine. The flavour I got was superb and it made for an absolutely delicious vape!

While all of the various juices that I have so far tried out in this tank were very flavoursome and enjoyable I felt that the Siren 25 GTA really is at its best when using either dessert or tobacco flavoured E-Liquids since all the various notes stood out really well. Suicide Bunny Mother’s Milk tasted fantastic in the Siren as did Fallstreak Cirrus. Purity Black Calico and Trebica (both tobacco flavours) were excellent in this tank and actually compared extremely well in flavour to far more expensive tanks that I own!

I am glad that I went for the larger capacity 25mm version of the Siren because even when using a 1.0oh coil the tank does like to guzzle your juice (still not as bad as many Sub Ohm tanks) and this is no doubt due to its excellent wicking properties. On the plus side of things I have never got a dry hit with this atomizer and the wicking and coils do actually seem to stay cleaner for much longer compared to other tanks.

One of the most enjoyable things about this tank is the range of airflow options and you can go from either a slightly restrictive lung inhale at its most open to a restrictive mouth to lung when set to its smallest setting. The nice thing is that should you want a slightly more airy vape you can simply unscrew the airflow diffuser from the deck.

Vapour production was very reasonable and probably about right for this type of tank. One thing I have noticed while vaping this tank is that on occasion you may get an ever so slight weeping of juice that seems to occur near the airflow control ring. This seems to happen the most often after re-wicking, filling and also on occasion when you adjust the airflow. At worst it is only ever a very small droplet or two and can be quickly wiped away. It could potentially be due to not using enough cotton but I felt that I had used plenty.

I suspect the problem is either down to the seal between the glass and the base airflow control ring or it is due to the Siren 25’s glass chamber which does cause a great deal of condensation to occur and it is likely that droplets are seeping through the airflow diffuser. While it is somewhat annoying having to wipe the slimy airflow control ring every so often it is certainly something you can live with and to be fair there are times when there has been absolutely no weeping at all and everything has stayed completely dry so it could still be down to the wicking or even the thickness of juices that I have used. 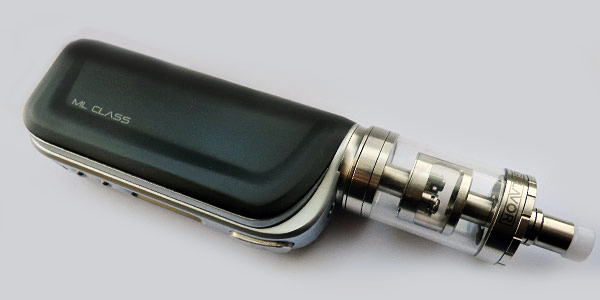 The Siren 25 GTA in my opinion is an extremely good tank that offers a very flavoursome vape and will suit a large amount of people who prefer a mouth to lung inhale!

As it stands and considering the reasonable price (typically £28.99) the Siren 25 GTA has only minor shortcomings, namely occasional minor weeping of juice (might be a wicking issue), slightly crunchy threads and ideally the airflow control ring could have used one more even smaller hole.

Overall the Siren 25 GTA gets things right in the areas that matter most, namely quality of vape, ease of build and filling. Despite its minor flaws I would definitely consider getting one if you really do need a tank that offers a very good mouth to lung vape!