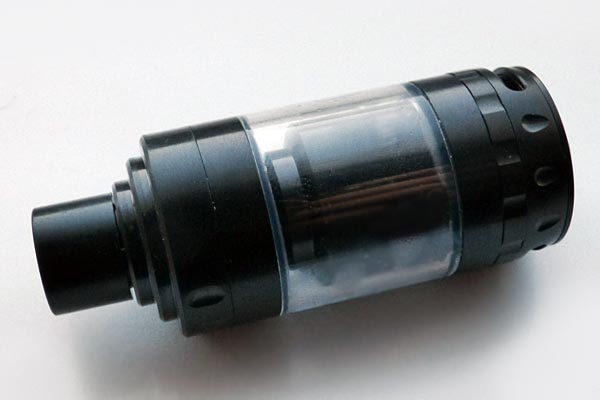 The Cthulhu III RTA by Cthulhu Mod is the latest incarnation of their existing Cthulhu tanks. The tank has been completely redesigned and is now 26mm in diameter which means the deck is far larger and easier to work with (now 19.8mm in diameter).

With an interchangeable deck system allowing users to use either a single coil or dual coil deck along with massive adjustable airflow, PEEK insulators, top filling and a 5ml capacity the Cthulhu appears to be rather impressive. 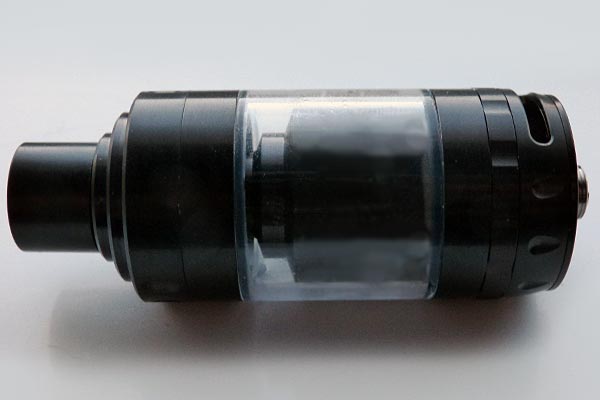 In terms of manufacturing the Cthulhu III is very nicely put together and it features decent threading unlike my original Cthulhu RTA which was rather haphazard to say the least (this was fixed in later production runs).

The Cthulhu III is massive since Cthulhu Mod have redesigned it to be 26mm in diameter unlike the previous incarnations which were 22mm. As such the tank can look a little overwhelming when atop some devices. Even when attached to my relatively bulky IPV4S there is some serious overhang and I would speculate that it would look rather silly on more compact devices. Nevertheless the tank being made from 316 Stainless Steel feels weighty and rather durable with the glass being nice and thick. Should you ever accidentally break the glass the package does include a spare tube.

Even though it is a bulky atomizer the design is actually rather attractive and quite streamlined. The Cthulhu logo is beautifully laser etched on to the chimney so you can see its sinister face glaring at you when vaping. The tank is available in either a standard Stainless Steel finish or a black version which is also made from Stainless Steel but covered with an anodized paint finish.

The drip tip is a short wide bore variety and made from Delrin which helps to minimise the amount of heat that reaches your lips. The drip tip while a nice design was rather wobbly on the tank that I received for review and it did not always press fit completely flush. Of course this isn’t really a big deal and should you want to swap it out for one of your own you will need to make use of the included 510 drip tip adapter.

The 510 pin while removable is non-adjustable but I did not have any issues getting this tank to sit flush on any of my mods. A dual coil deck is pre-installed for you and can be easily swapped out for the included single coil deck. Since the 510 pin is what holds the deck in position this is the rather obvious reason why it is non-adjustable.

The Cthulhu III according to the specifications holds 5ml of juice but in all honesty I would say that is something of an exaggeration and it is probably closer to 3.5ml or 4ml. The tank features an easy to use top filling system and you simply have to unscrew the top cap and squeeze in your juice. Due to the large diameter of the Cthulhu III there is tons of room for your juice nozzles or droppers. This RTA also has fully adjustable airflow and juice flow control which means high VG juices will not be a problem. 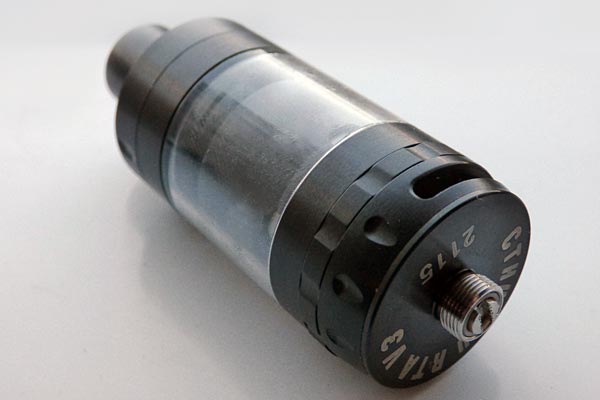 The airflow on this particular RTA is massive and it features two fully adjustable Cyclops style slots that each measure 15mm by 2.5mm. When you factor in the large diameter and wide bore chimney the draw on the Cthulhu III is an extremely airy one designed for direct lung hits. In fact the draw on this tank while very smooth is still somewhat insane and you really do feel like you could keep drawing air into it.

It often sounded to me like there was some terrible gale going on outside while I was vaping. H.P. Lovecraft, if he actually lived in our time and was a vaper would probably describe it as the fearful sound of the crashing tide marking the awakening of dreaded Cthulhu!

So it is definitely a very airy vape but you can just about get away with a very loose mouth to lung vape if you build the tank with a high Resistance single coil and heavily dial down the airflow but it still may be less than ideal for MTL vapers. 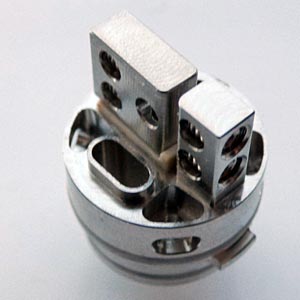 The Cthulhu III is a fairly simple tank to get to grips with but what is really nice about it is that offers a fair few options when building. I think that what I liked the most about this product is the large building area and also that a single coil set up didn’t feel like some concession by the manufacturer or an afterthought.

Both decks are huge being 19.8mm in diameter. The Dual Coil deck features 3mm diameter post holes which means you can happily use bigger coils such as Claptons as well as experiment with thicker wire types. The single coil deck is a little different and instead has two screws which you feed the wire under before tightening down. In some ways it was a little reminiscent of the TFV4 RTA deck. You do need to take care with this deck and trim your coil legs very close to the deck or you will end up shorting out your coil when you reattach the rest of the tank. Both decks feature PEEK insulators and do differ slightly in their airflow options with the single coil having one air hole and the dual featuring two, in addition the dual coil deck has a 3mm centre air hole which is designed to ensure the air hits the coils from behind as well as below.

My first build was using the single coil deck which is not the one that is pre-fitted when you open the product. This isn’t a problem since you simply unscrew the 510 pin and pull out the deck. You then line up the tabs on the new deck with the indentations, press it in, refit the 510 pin and tighten it up, dead easy!

My first build consisted of a single 26 gauge coil with a 3mm internal diameter which had a final resistance of 0.6ohm. The screws worked really well, hold the wire securely and do not cut it.  The included Allen Key was also decent, unlike the one I got with the original Cthulhu RTA which felt like it was made from rubber. The juice channels are seriously good on this RTA and it is really straightforward to nicely fit your cotton wicking. 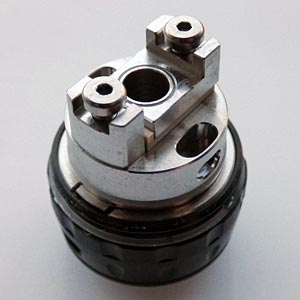 Having primed the coils and filled up the tank with Halcyon Haze’s Yellow Biafra I opened up the juice flow and started vaping at 40W. Flavour was excellent and I could certainly pick up all of the individual notes in the juice. What surprised me the most was the quite insane amount of vapour that was produced even from a single coil. Usually when reviewing a dual coil RTA that has single coil option the vape can often feel much poorer and hardly worth the bother but that was certainly not the case here and in my opinion it could happily be enjoyed by single coil RTA fans.

My next build was once more using 26 gauge and this time I decided to see if a single 26 gauge at higher Resistance would still give a decent enough vape. The final Resistance of this build was 1.2ohm and I must admit even vaping at 16W it was a pretty good vape, flavour was still very good but given how airy the tank is it did result in a much cooler vape. You can of course get around this by heavily reducing the airflow where it can border on an extremely loose mouth to lung vape. Personally considering the large amount of airflow I think it’s better to ideally aim for the 0.5-0.8ohm region but all the same it was still worth trying out and it certainly doesn’t drain the juice anywhere near as fast at that Wattage.

I then swapped out the deck for the dual coil one and this time I went for a 24 gauge dual coil build that had a final Resistance of 0.4ohm. As you might expect this was of course the most flavoursome build and it certainly put out a great deal of vapour. I did find myself having to dial down the Wattage because even with the massive airflow because it tended to get rather hot.

In consideration even though the dual coil build was certainly the best in terms of flavour and vapour production it drains the juice very quickly (take note if you are on a juice budget) and personally I think if I owned this tank I would probably stick with a single Clapton or twisted 26 gauge build because the vape in single coil mode was definitely good enough, at least for my tastes. 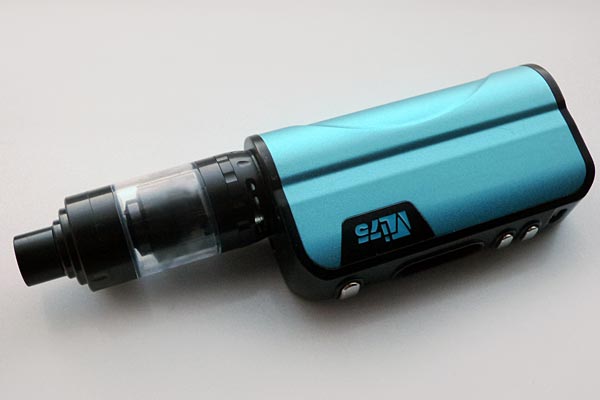 Given its namesake it will come as no surprise that the Cthulhu III RTA is a real beast of a tank! The airflow is quite monstrous and results in a great deal of vapour production even when only using a single coil build so you will be quickly fogging up your room and providing you vape on a moonlit night at a very particular time of year and assuming the stars are in their correct alignment you may even discern the giant form of Great Cthulhu leering out at you from the vapour!

Joking aside the Cthulhu RTA offers plenty of flexibility and is relatively easy to work with and unlike some of its early incarnations is far better machined and designed and comes with a good amount of spares. Flavour is excellent and vapour production is top notch but will of course depend a great deal on your own build. One real advantage to this tank is that while it is excellent in dual coil mode, single coil users have not been overlooked and will still get a very decent vape out of this RTA!

The only minor flaws I can find with this RTA are an ever so wobbly drip tip which is hardly an issue at all and the fact that it really does feel like it holds only about 3.5ml to 4ml of juice rather than the specified 5ml. Another issue to be mindful of is that it does tend to gorge itself greedily on juice and will require some frequent re-filling and I do feel that the airflow might be a little too much for some users. As you may have noticed its 26mm diameter means it is a little on the large side so it might look a little silly perched on some devices.

Despite these very minor issues this is an excellent product from Cthulhu Mod and well worth picking up!