VooPoo continue their pursuit of the perfecting their MTL range. Hot on the heels of the superb Drag Q, we were sent the simply named Argus Pod to test, this is more of a pod of refinement rather than something innovative, yes it’s just another pod, but a damn good one. 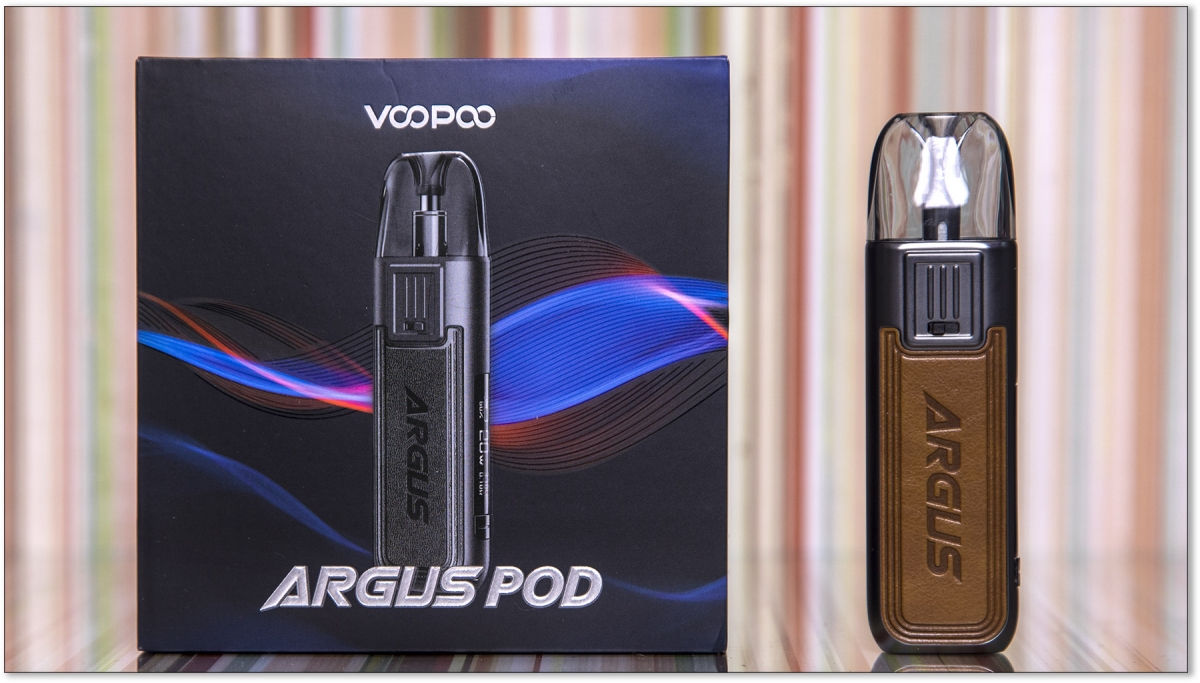 I’m not sure if any of you remember the Lost Vape LYRA which was superb in every way but the coils were dreadful, I always pined for a similar pod but with decent coils and the Argus Pod is exactly that and more (screen and adjustable airflow). 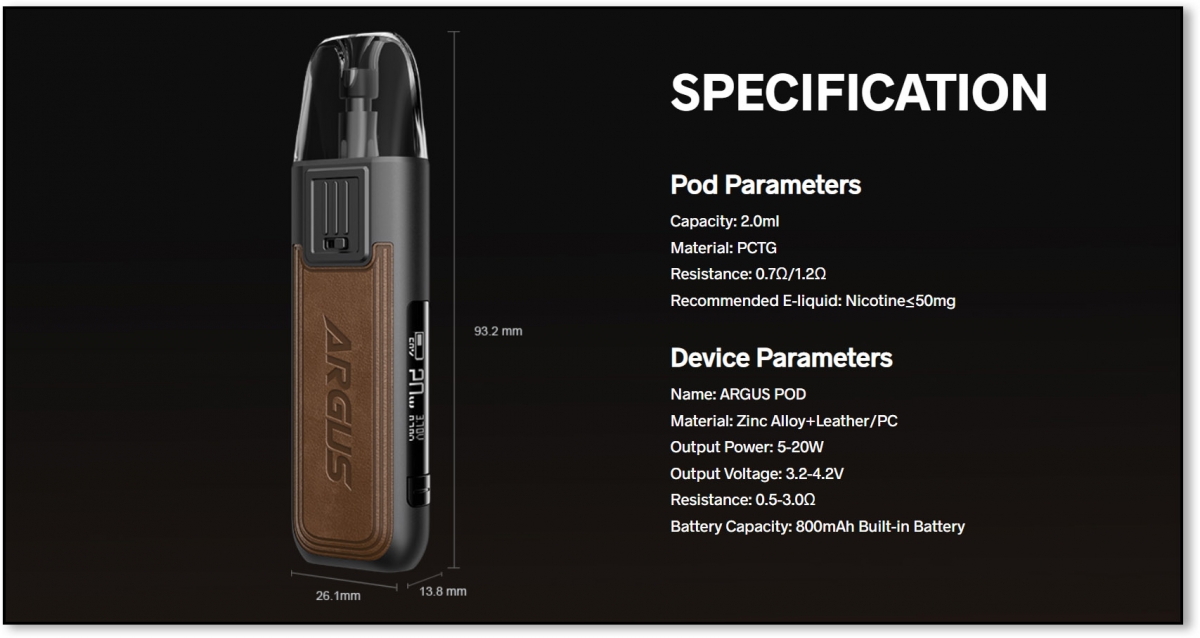 A couple of things missing from the specs; firstly the weight which is 53 grams, not too shabby for a metal and leather pod with a screen, secondly the charging current which is quite low at around 0.6amps but it doesn’t take too long to charge (around 40 mins).

The Argus Pod comes in a relatively standard box by VooPoo’s standards, but it is well laid out and is secure for shipping. There’s an open sturdy black box with a slide over top box displaying the kit, contents, and a few features. 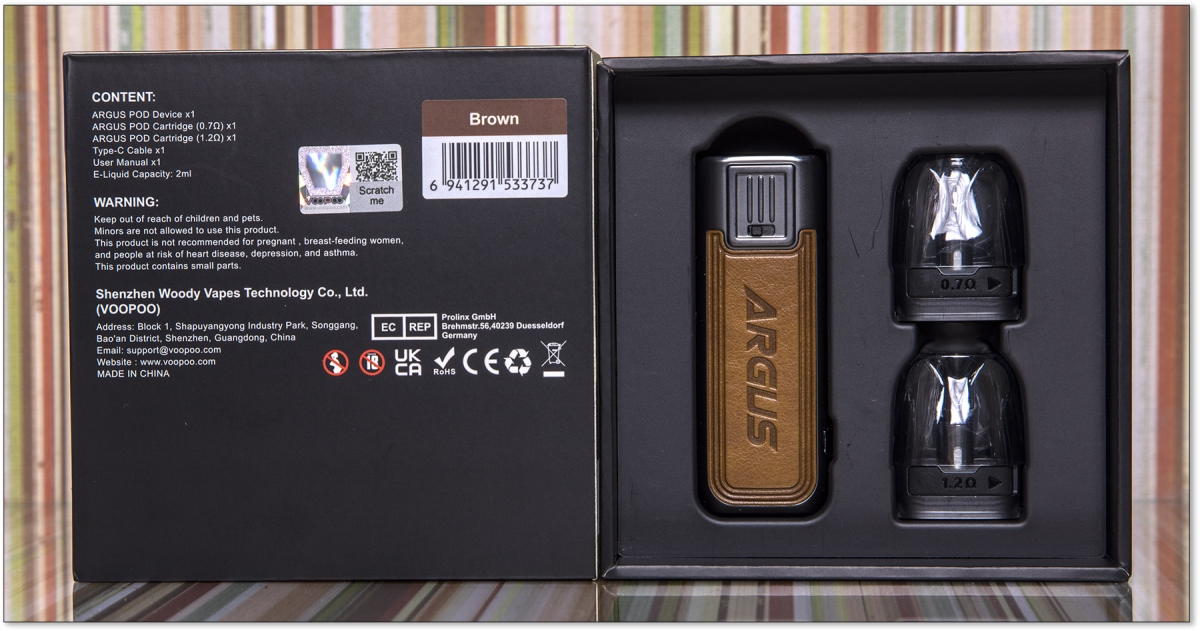 Thankfully VooPoo provide you with two different pods to try, a 0.7ohm and a 1.2ohm. The USB cable and the manual are in a black box which sits on top of the kit for added shipping protection, the USB cable is pretty decent in length and is good quality with a flat/ribbon style.

If I had to choose one word to describe the looks of the Argus Pod, it would be ‘Classy’. For such a simple and compact pod, it has an almost ‘art deco’ style to it and the shape makes it really comfortable to hold.

Since this was an advanced version, I had no idea what to expect. Opening the box up, I thought it was just going to be a posher Vinci Q, but this was not the case as this little bugger has a screen – this really was a surprise considering how thin it is.

VooPoo have ticked just about every box you could think of for a MTL pod kit; compact size, comfortable, adjustable airflow, clear view pod, adjustable wattage, USB-C, auto-draw, button lock, comfortable mouthpiece, and it is all bundled up in a smart and stylish kit.
*Spoiler alert; VooPoo pretty much nailed it.

Though the branding on the Argus Pod is a little over the top on three faces, it never shouts out as it is subtly done. I honestly didn’t notice it once I got vaping, the embossed logo actually added to the tactile feel of it.

The pod is held in place magnetically, it sits inside securely but there is a bit of play/wobble if you try and wiggle it (during vaping you won’t notice), yet the fit is tight enough to provide an effective airflow seal. The pod is designed to be leak resistant with four little air inlets on the base of the pod. 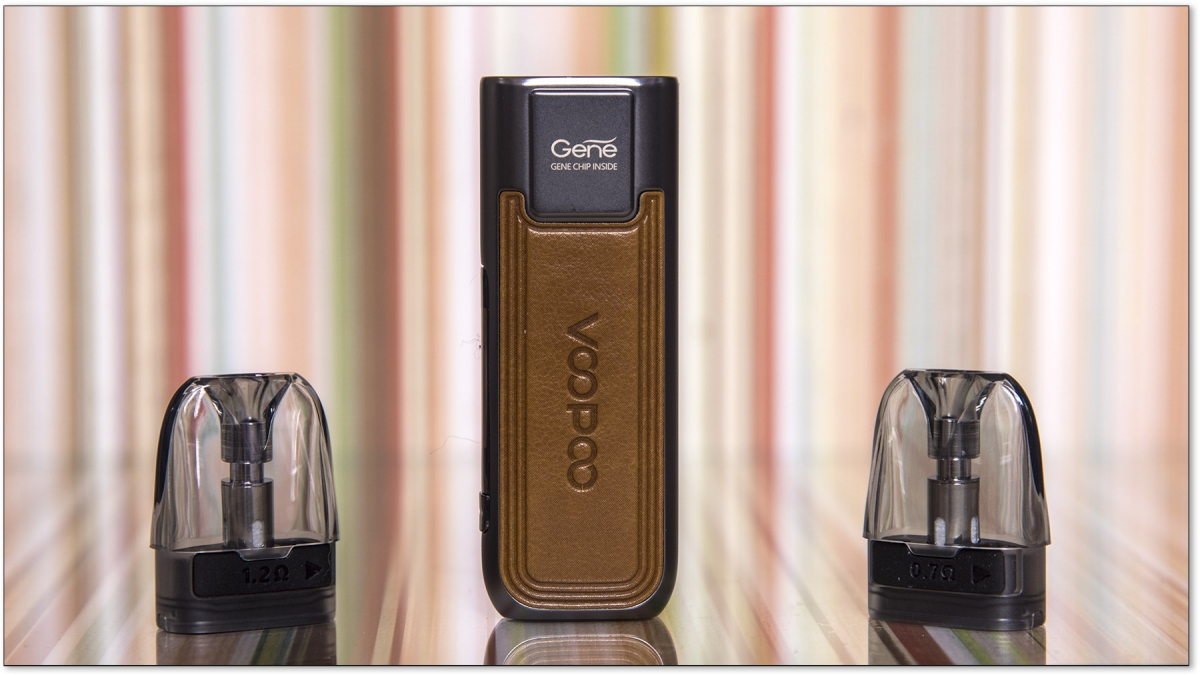 You get two different pods provided; a 0.7ohm and a 1.2ohm, both of these suit MTL though you can get a borderline RDL with the 0.7ohm but I wouldn’t say it’s one of the Argus’s strong points, this kit does excel at MTL though.

To fill up the pod you need to remove it and flip open the silicone bung, the hole is a decent size and with the clear pod, it was easy and mess free to fill and refill. The silicone does feel a little flimsy but since these pods are disposable that shouldn’t matter.

For such a small screen, damn is it bright! It’s perfect for indoor and outdoor visibility, not only that but it’s very clear and easy to read everything on screen (and that’s coming from somebody that normally needs reading glasses)

The basic controls are just enough for a pod of this size and the one button navigation works well:

The wattage adjustment can be a bit tricky to long press without accidentally increasing it so I found just taking a draw to confirm was far easier.

The locking feature is very handy and makes it especially pocket safe by having to do it through a menu, once I had my wattage set then this became its standard setting.

The screen displays some useful info. Obviously you get the selected wattage and ohms and applied voltage, but you also get a ‘vaping screen’ which displays the puff counter, battery bar with percentage, and an interesting ‘MIN’ counter which appears to be the total minutes vaping, this is handy to estimate how long the battery lasts and is just generally interesting I thought, for example it displayed 10 at 300 puffs which basically meant 30 puffs took a minute so my average draw was around 2 seconds – now I Know! 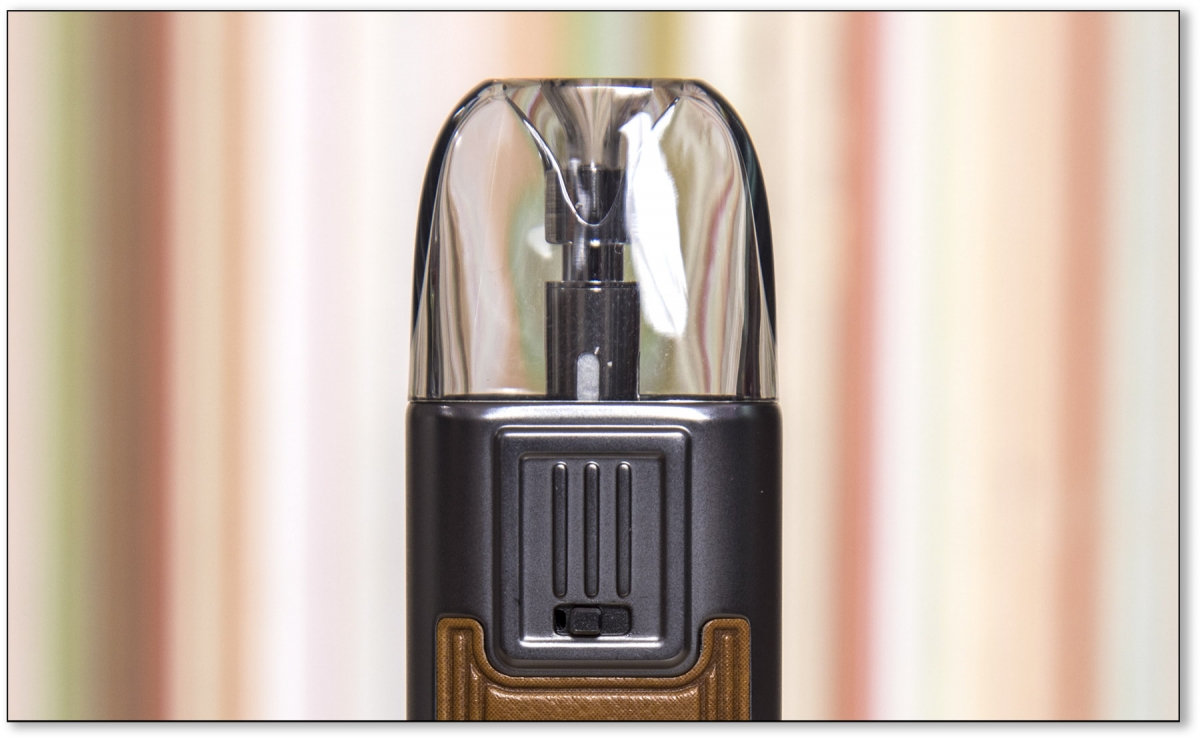 The only other control is the airflow adjustment which is done with a tiny lever on one side and by dingbat, is it effective! Fully closed I got one of the tightest cheek pulling draws I have had from any pod, fully open I got a sloppier MTL draw and a very restricted DL draw. The airflow control really impressed me and is one of the only adjustable airflow pods that I actually had to open a little. 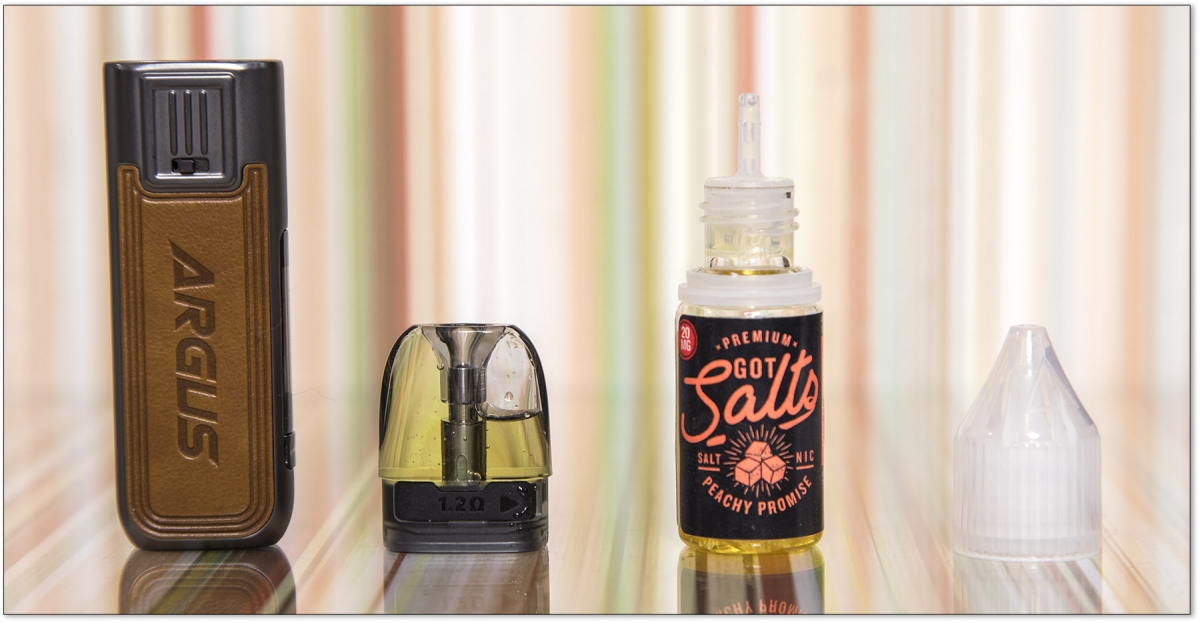 My expectations were high by this point but the Argus Pod brushed these aside and delivered a near perfect MTL vape, I honestly couldn’t fault it and I can’t imagine it being better than this, with a full bodied saturated flavour, a tight draw and smooth airflow, the auto-draw performed without a hitch, the mouthpiece felt perfect, and the device was comfortable to use. The size and the locking feature made it pocket friendly.

Both coils delivered the same high quality vape, but obviously the 0.7ohm just gives more of it but at the price of battery life. On the 1.2ohm I settled at 10 watts, and the 0.7ohm 15 watts. The 1.2ohm coil lasted me around 300 puffs, and unsurprisingly the 0.7ohm lasted under 200 puffs which is still decent for a compact pod with a screen.

Personally I would go for the 1.2ohm coil as the flavour is superb to the point where the 0.7ohm felt too much of a good thing, if the 1.2ohm satisfied me then it’s only natural to go for the longer lasting option as I could trust it to last me most of a full day before charging.

The leak resistance is working well and I’ve experienced no leaks or even condensation so far. Better still, I get less flooding when left overnight, finally I think we can put to bed (or bed-wetting) leaky pods.

VooPoo are spoiling us MTL users with two cracking releases (DRAG Q – see previous review), and have continued adding to the Argus product range. The vape quality knocks spots off the ARGUS pod/mod due to the better airflow control and vastly better coil performance.

I was going to try to ignore comparing the Argus Pod to my all-time favourite and most used MTL pod; the DRAG Nano, how could the Argus beat that? Well it kind of does as the pod is more comfortable and the vape quality is marginally better. It’s more comfortable to hold too, but thankfully there is still enough of a difference for me to like both equally, the lanyard makes the Nano more handy and the design is a thing of beauty, but the ARGUS Pod offers the user more though, the screen, locking, variable wattage, and ergonomics make it a more sensible choice.

Is the ARGUS Pod just another f**king pod? Absolutely not! It is one of the very best pods for MTL in so many ways. The evolution of pods has led to this highly refined and near perfect pod kit. I would go as far as to say that it’s VooPoo’s best MTL pod so far and the style/colours should appeal to a lot more users.

It vapes and feels like VooPoo have put a lot of R&D and testing into this product as I can’t fault it, I already know the cons/niggles won’t exist and I won’t feel as tormented trying to find any.

As previously mentioned; I have none, nada, not a sausage. Any potential turn-offs for buyers? Only the wasteful pods over replaceable coils, these pods do feel too good to throw away.

I wasn’t expecting the ARGUS Pod to be quite this good, I was still too busy enjoying the DRAG Q and my enthusiasm wasn’t great to start on this one, but how soon that changed! VooPoo have become my overall go to MTL vape supplier when it comes to stock coils, and the Argus Pod will take some beating.