Vaporesso are still busy coming up with new vape kits. This time they have gone back to basics with a proper starter kit that even the worst technophobe will be able to crack on and vape within minutes. 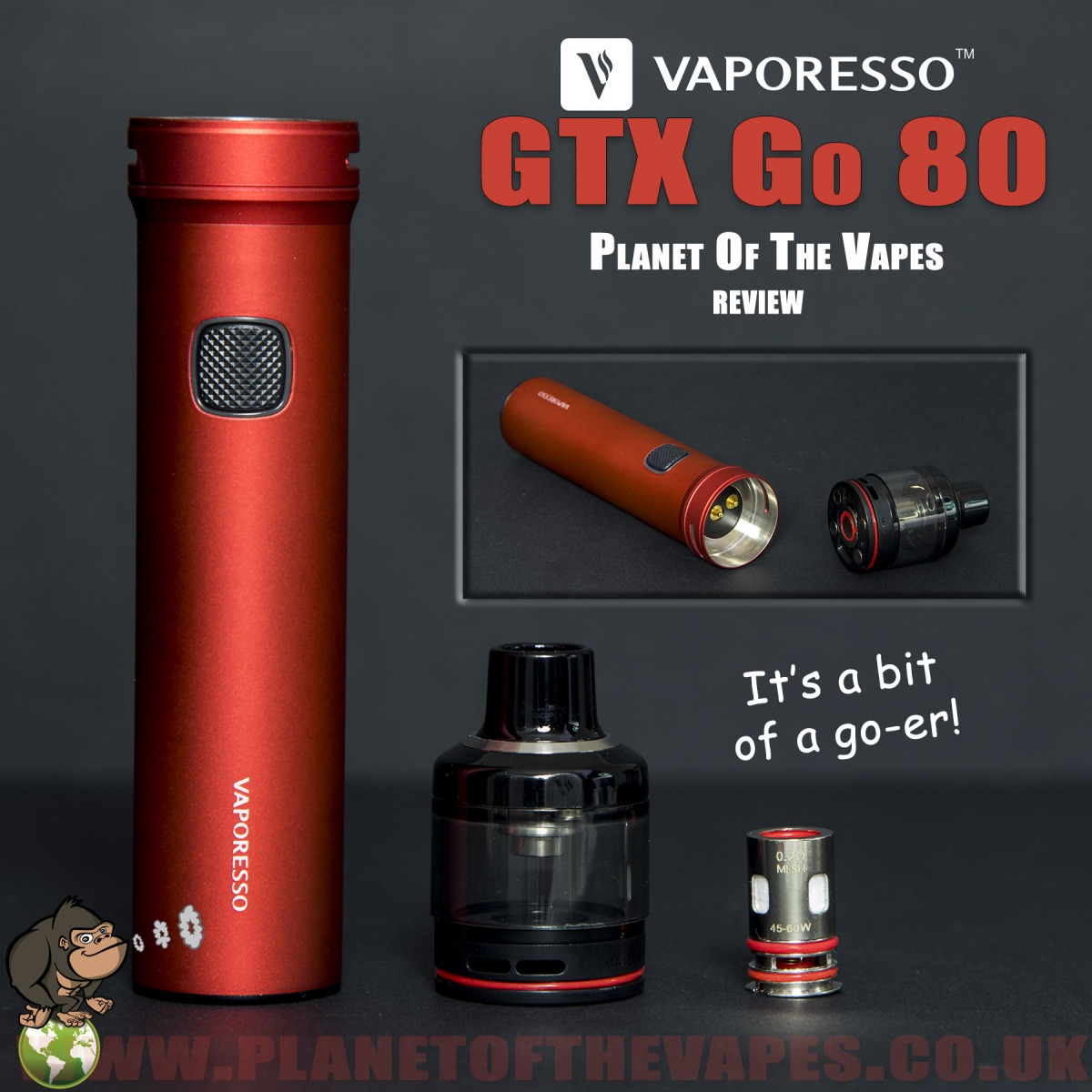 Essentially it has just three components: Battery, Pod(tank) and Coil. There’s absolutely no settings other than turning it on/off, but the airflow is adjustable so you can refine the vape to your liking. 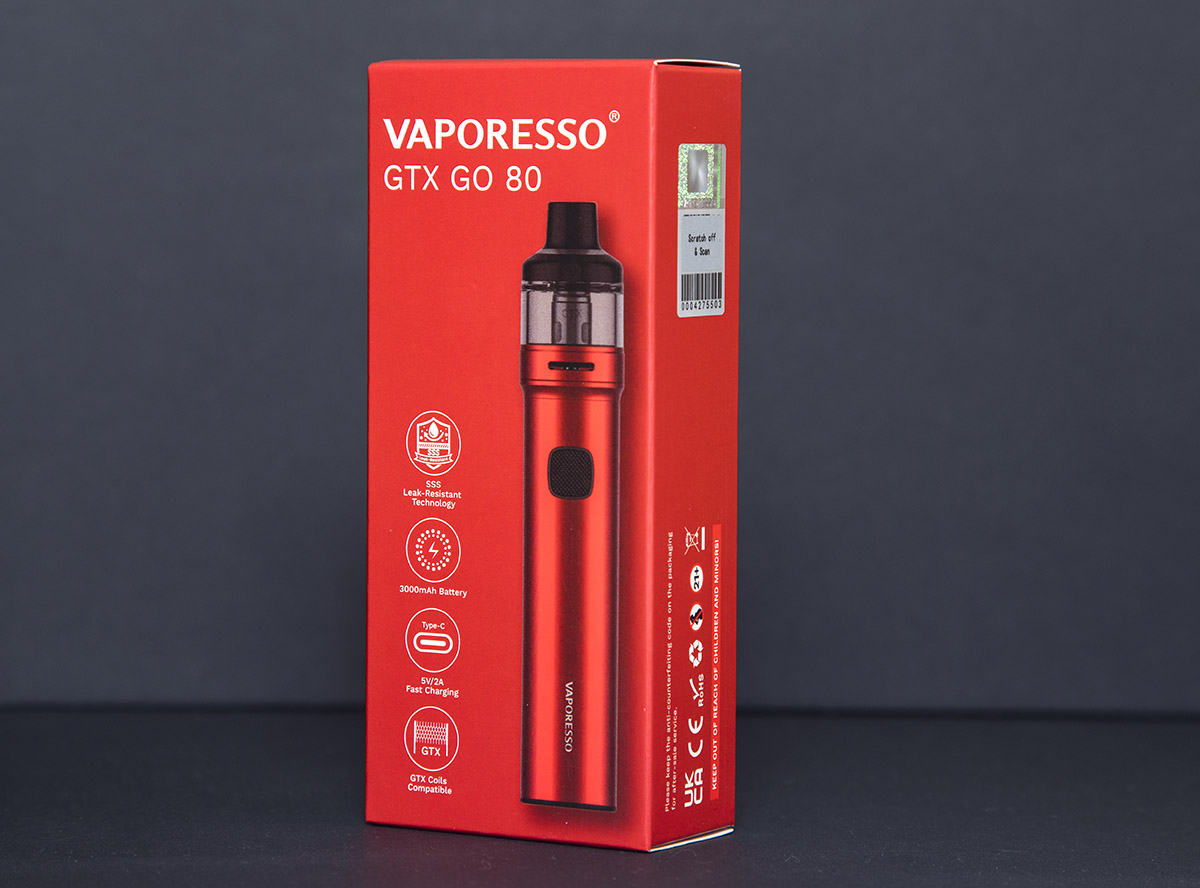 Simplicity is Vaporesso’s tag-line for this kit and the unboxing gives you just enough to get going (other than juice obviously). You get the kit with just one coil, a USB-C cable and some bits of paper. 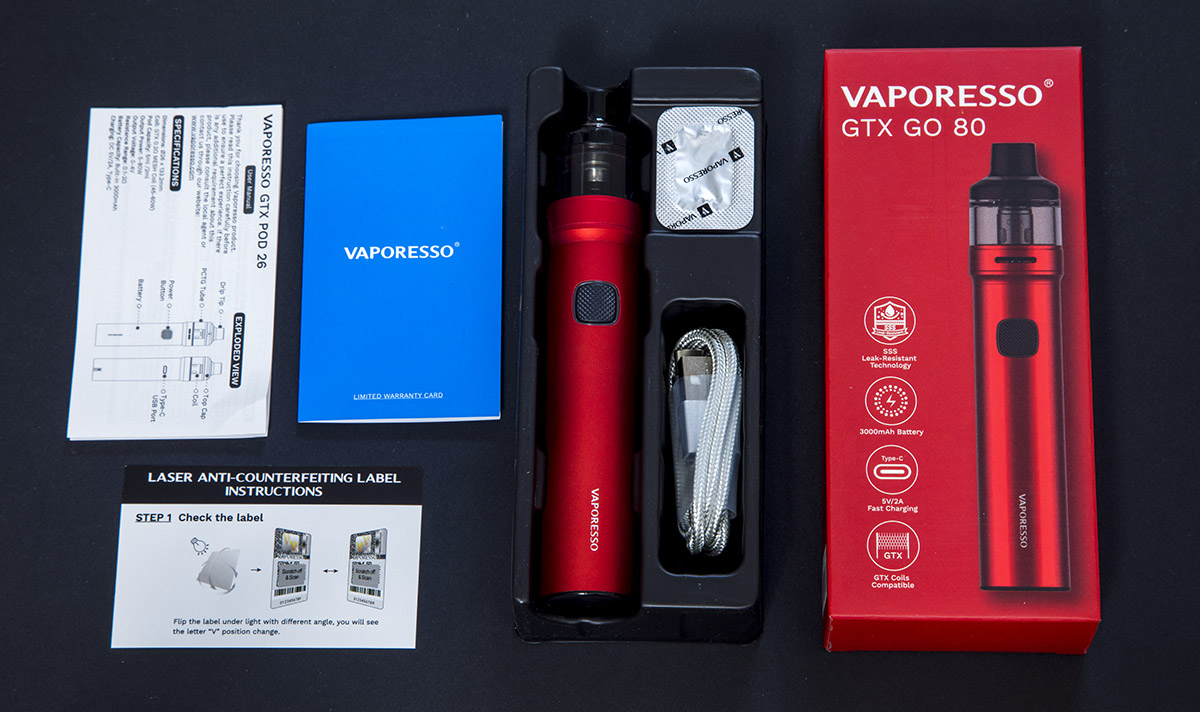 I was really surprised to see that only one coil was included in the kit which is very unlike Vaporesso and pretty tight-arse if you ask me, so it goes down as a big con before I get going. If you accidentally dry burn the coil then you’re stuffed until new coils arrive. 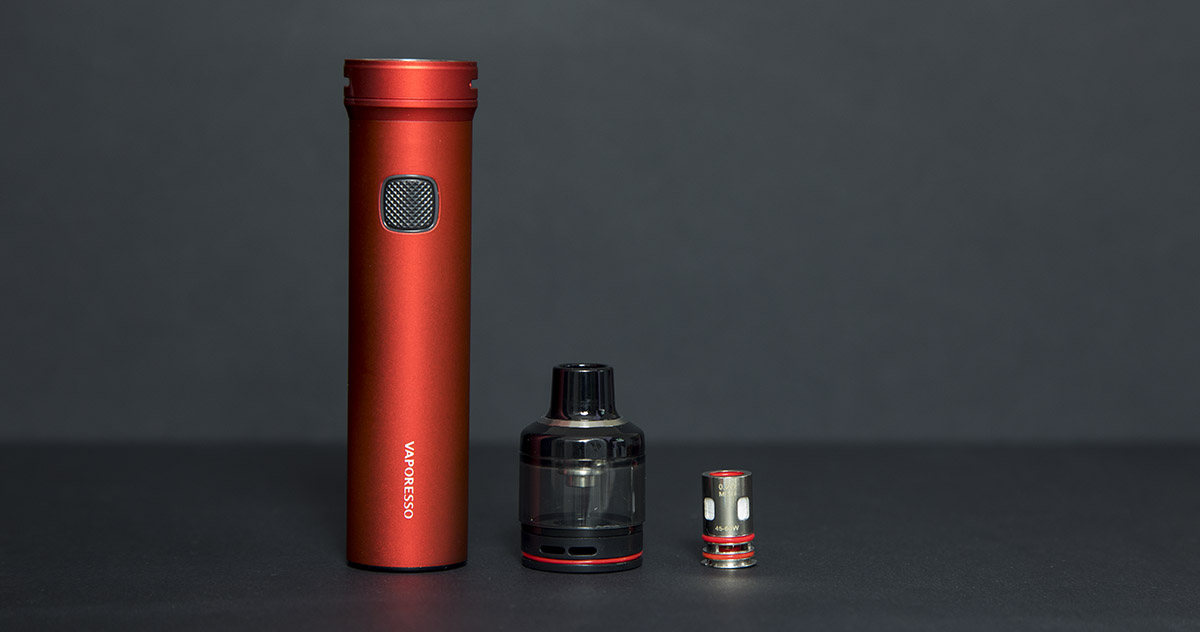 For such a simple device, I liked it a lot more than I was expecting from the pictures I had seen. The size is just right for the pod. The satin finish is gorgeous and feels so soft in your hand. The thing I expected not to like actually turned out to be a pro for me, and that’s the bulge at the top. It might not look pretty but it really adds to the ergonomics and prevents your hand blocking the airflow.

The fire button feels really tactile and the travel is really short, I really like how intuitive the position is and I could easily fire it in multiple grips, even palm firing. The base is plastic which I prefer as it won’t scratch surfaces. It stands up well but obviously it will topple over easily with a knock.

The pod is a magnetic snap fit and is held in place just right making it easy to remove and refit. The airflow adjustment is achieved by simply rotating the pod. 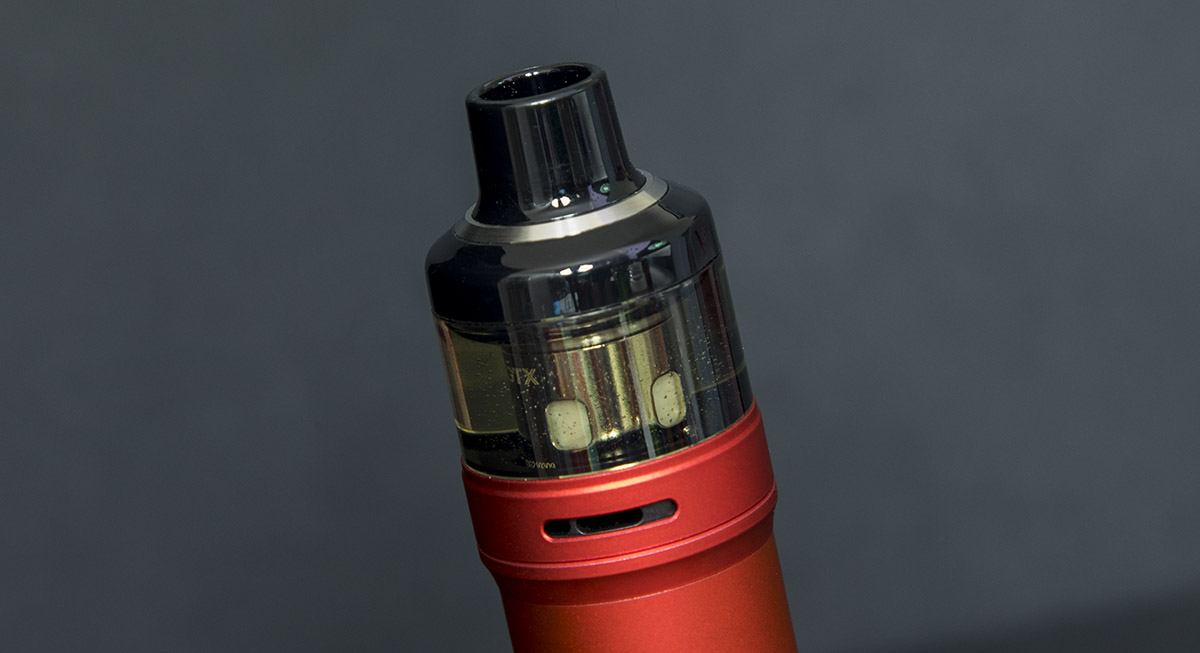 The airflow is dual side and has two ports each side so that you can exactly split the airflow in half. This is quite effective in use and the visibility is good. Fully open, this thing is very airy, possibly one of the airiest pods I have tried, but it also closes down really well and RDL users will find their sweet spot as well as full air DL users.

The screw top-cap/mouthpiece was another thing I wasn’t expecting to like but Vaporesso have nailed it on the GO 80 version. It unscrews anti-clockwise in what feels like an eighth of a turn and clicks into place when you replace it, I’ve not quite seen a top-fill pod as effective as this.

The newer triple O-ring GTX coil is a simple press fit and no lining up is required. The idea of the added O-ring is to reduce the chance of it leaking through the airflow as the pod has a hidden condensation chamber which means any excess liquid should be pulled back into the coil as you draw.

One thing that grabbed my attention was the thin red O-ring at the base of the pod. This looks like it should prevent any liquid that does manage to leak through the coil so it shouldn’t get down into the battery to ruin the electronics. I would have liked to see another one above the airflow slots to make an airtight seal but it won’t affect the 80 as it’s designed for an airy draw anyway. I also have the GO40 to review next and I’m expecting it to be more of an issue on that.

So after delving deep into the extensive manual, I fully educated myself before I attempted to operate this complex machine.

It doesn’t come much simpler than that!

Bearing in mind I have been spoiled with the excellent Swag PX80, I really wasn’t expecting too much from the GO80. I knew the GTX coils were damn good but with no wattage controls, I half expected an underwhelming vape. Thankfully it is far from that!

This thing just hits perfectly, instant power, not too warm, and full bodied flavour right from the get ‘go’, and the airflow was super smooth. Vapour production was impressive from such a small coil, but I’m used to that as it is similar to the PX80 and PM80.

"FORMULATED SIMPLICITY"
This statement is Vaporesso’s main marketing slogan on the GO80 (and GO40) and I found myself admiring this kit for exactly that. I was really enjoying vaping the GO80 a lot more than I had expected, and by this time I couldn’t really find much wrong with it, certainly more pros than cons before I scrutinised it further.

The pod is one of my favourites. The smoked section is still very clear and easy to see your juice at all times, refilling it was a doddle and mess free as there is a small fill port that took any short-fill nozzle I tried, and there’s an additional hole to prevent airlocks. I really liked the top of the pods finish which looked quality, and the chrome ring finished it off nicely. The only thing I didn’t like was that the mouthpiece was fixed so you cannot use your own, but to be fair the mouthpiece is very comfortable and suits the pod so I probably wouldn’t change it anyway.

Battery life was excellent due to the 3000mAh built in battery. Going back to the ‘Formulated Simplicity’ by having no screen, functions etc. means that the device required less power resulting in a longer battery life. There are all the built in protections you should expect, but the power usage of the chipset is minimal.

The included coil is a GTX 0.2Ω mesh coil which is rated between 45 to 65 watts. The GO80 delivers up to 80 watts as the name suggests, however this device actually delivers voltage in relationship to the coils resistance, essentially mech style or BYPASS mode but you don’t need to know anything about either as all you need to know is that the chosen coil will deliver just the right amount of power.

The only thing worth knowing for beginners is the lower the ohms of the coil requires more power. If you choose to buy a higher ohm coil such as the GTX 0.6Ω MESH Coil (20-30W), then as you can see it requires much less power and the battery will last even longer.

As the battery drains below a certain point, the power will start to drop off and the vape becomes weaker. You only really notice as it gets really low and the LED in the fire button indicates the battery level:

Charging is via USB-C and a proper 2 Amp fast charge. On average it took an hour to recharge, but I tend to recharge before it gets to RED.

I’m not quite sure why Vaporesso came up with a whole new pod instead of the one from the Swag PX80, from the photo below you can see I have swapped the pods over BUT they aren’t cross compatible. The GO80 kind of fits the PX80 but only with the airflow fully open as the magnets polarity bounces as you rotate. The PX80 simply will not fit the GO80 due to the magnets being the polar opposite so it won’t snap down and magnetically hovers.

But surprisingly this didn’t bother me as I think I preferred the simpler GO80 pod due to the filling method and the little chrome ring was nicer. 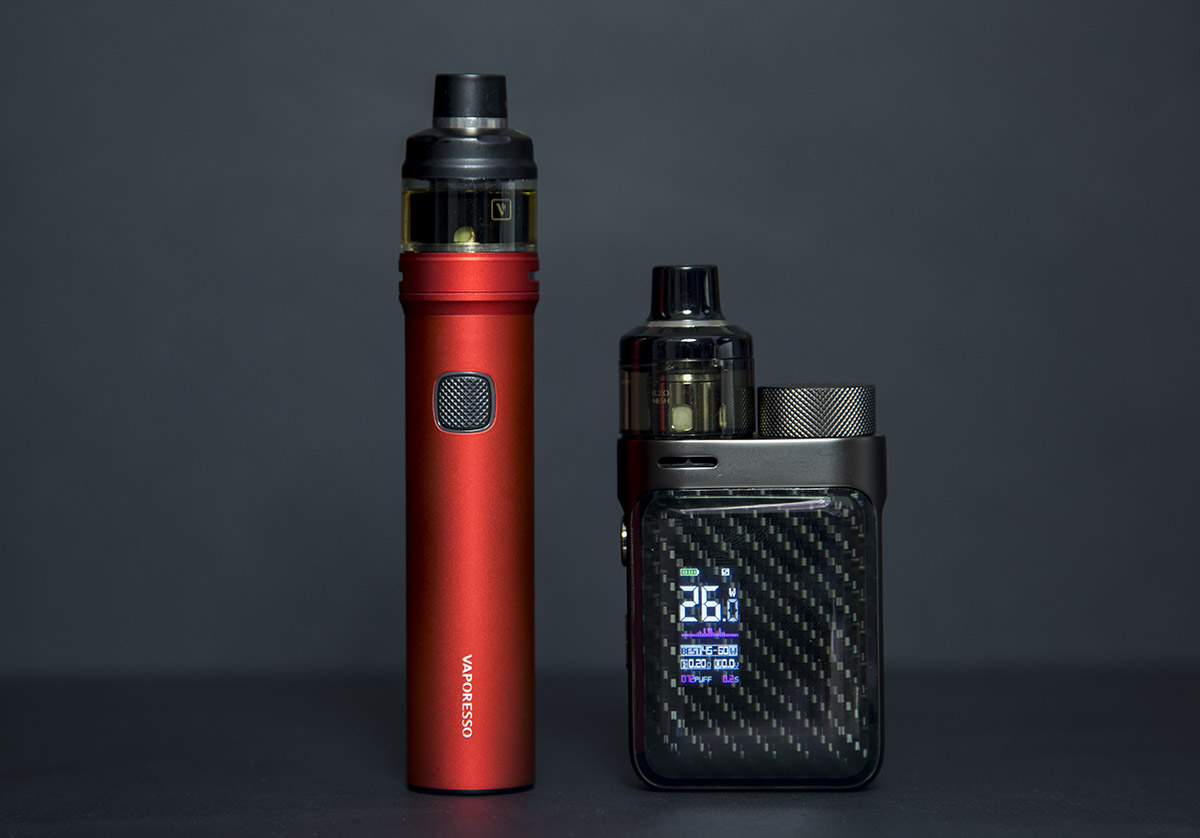 I’ve waffled on far more than I should, sorry! So I will get onto the conclusion…..

Simplicity sums up this kit pretty well but that doesn’t mean that this isn’t special, the overall vape and performance of the GO80 is bloody superb! I love how it feels, and the battery life was a safe bet for an all-dayer.

This kit will be high on my list to recommend to beginner DL vapers but also to experienced vapers as I have really enjoyed this kit, the full on airy DL vape feels nothing like a pod, there is warm dense flavour and clouds aplenty, and it looks and feels like an old-school pen mod.

With the compatibility of the long lasting GTX coil range, there should be a coil to suit most DL to RDL vapers, but the included GTX 0.2 Ohm coil is the perfect choice for this kit. A better choice would have been a spare one included. 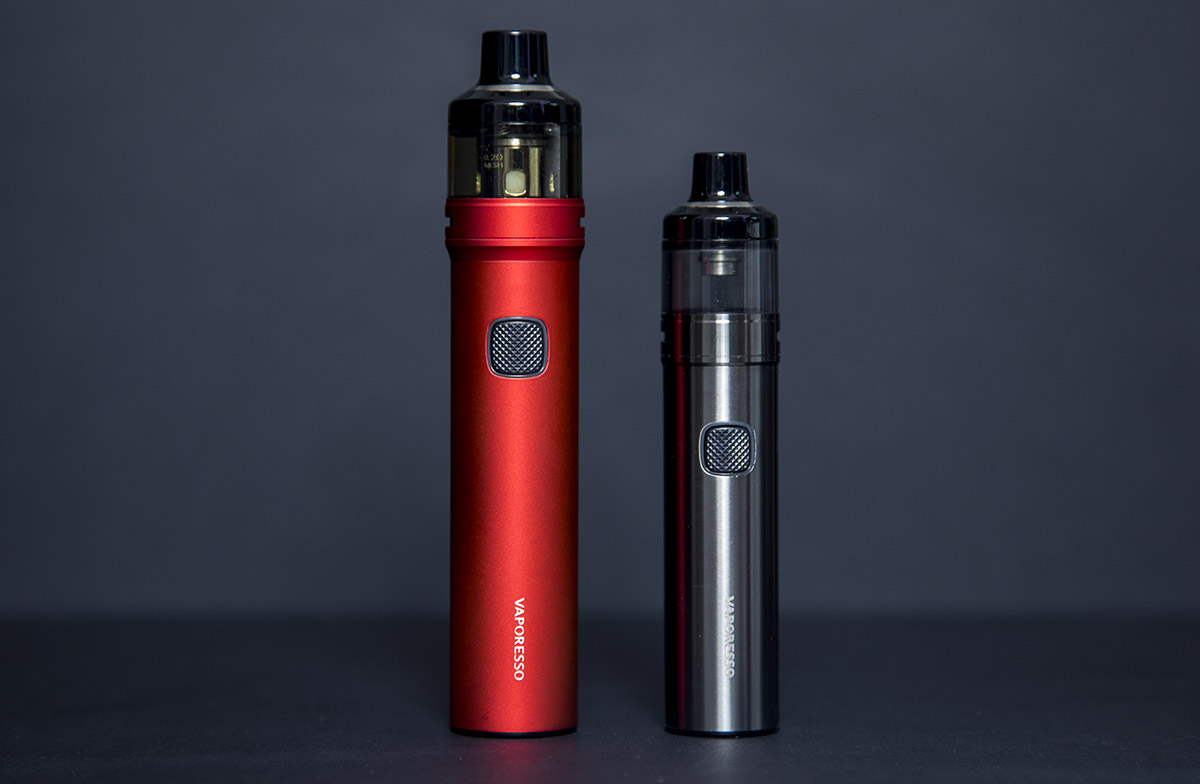 Coming soon is my review of the GTX GO40 kit, will it be the MTL version? I really hope so!
Our resident Pod Queen DeeDee will be doing the official review so keep an eye out for that (Mine will appear on the forum).

Hand on heart, I wasn’t expecting to like this kit, I didn’t understand why Vaporesso felt they needed to go so basic. But after testing it, I really get it now and I more than like it. Vaping the GO80 has been a genuine pleasure, forget that it’s a ‘pod kit’ as it’s simply a superb sub-ohm DL pen mod and tank with a modern twist. 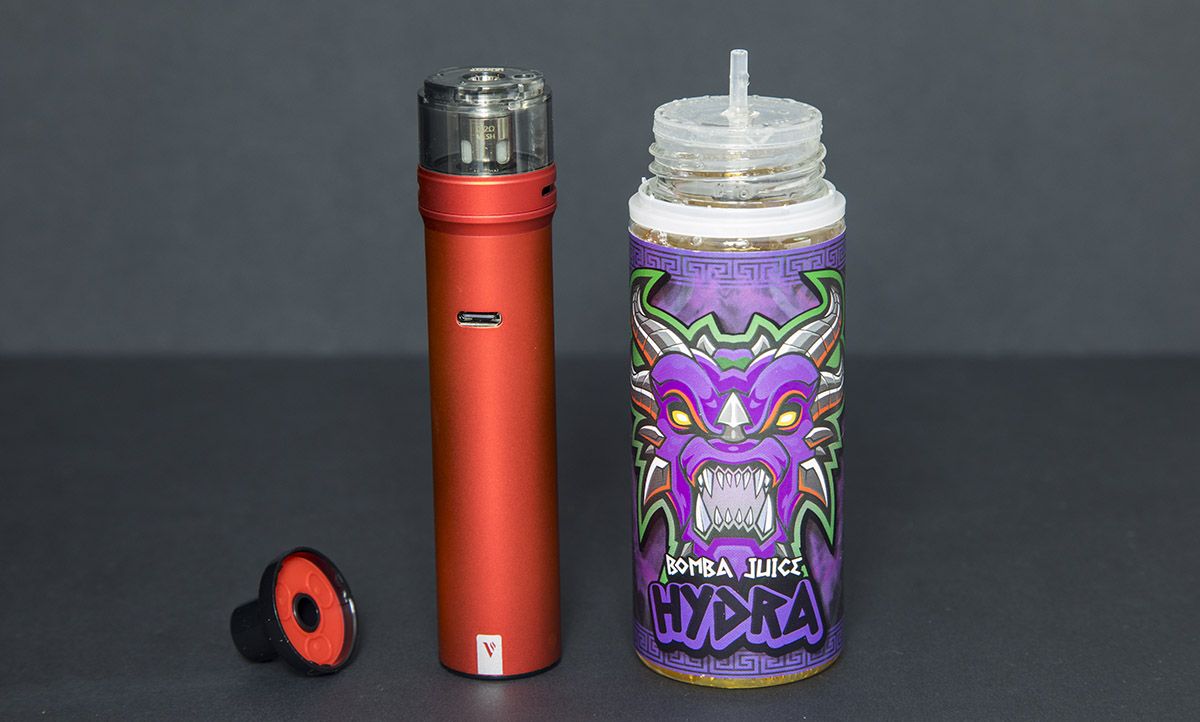