The Miso Pro is the latest pod kit release from Univapo. After trying the superb Miso C, I was keen to see what this larger version had to offer. 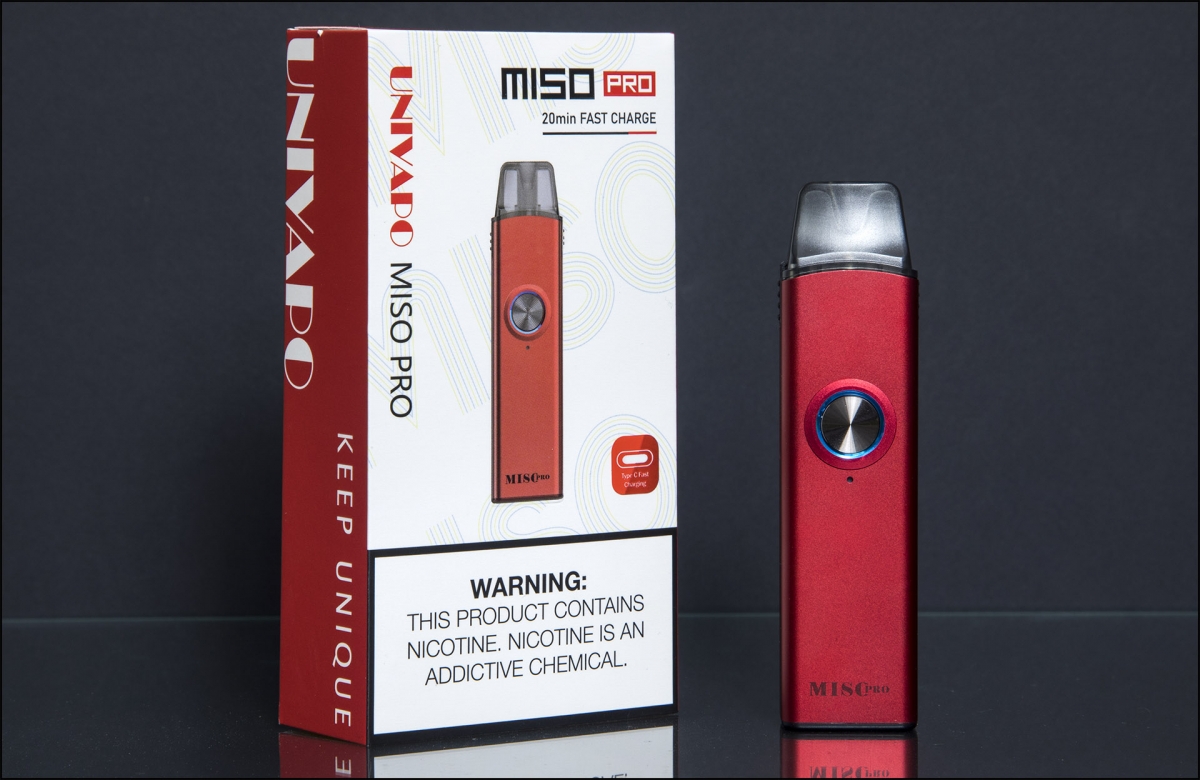 The Miso Pro comes in a sturdy box with an outer sleeve, there’s a little tab on the base to help you pull the inner box out which was a nice touch. 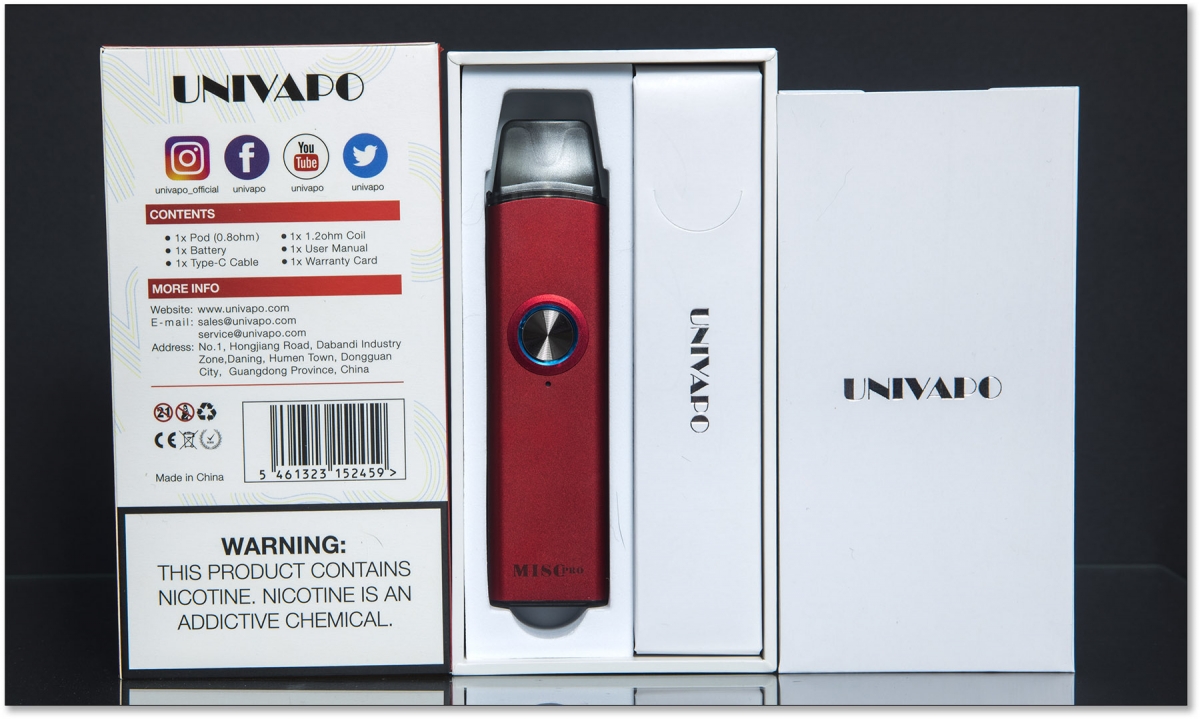 The kit comes with the pod and battery. The instructions in an envelope, and there’s a second box containing a USB-C charging cable and a second coil.

The Miso Pro is pretty basic and uses the tried and tested ‘pod’ design with a battery section and a pod which is held in place magnetically.

There’s a protection sticker to prevent a connection during shipping that needs to be removed. There is a 0.8ohm coil already fitted into the pod, and a 1.2ohm coil is included in the box.

The pod is a bit old-school as you have to unscrew the base and unscrew the coil from the base adaptor (make sure you don’t throw away the base adaptor!), this is far less convenient than the press fit we see in other pods but it is only a minor faff and creates less waste than closed pods.

The styling is minimal and looks a little bland, but it has been well sculpted and is very comfortable in the hand. The large 22mm fire button is a nice touch and feels intuitive to find. It is inset into a raised section which adds to the looks and tactile feel of it.

The USB-C charging port is on the side and offers fast charging which is one of the strongest features of this pod kit (more on that later). The printed branding is minimal and subtle. The only other thing to point out is the airflow hole on one side only so rotating the pod should give two different airflow options.

Unlike the Miso C, this is a magnetic fitting pod which is well implanted as it fits securely and is very easy to pop in and out. There’s a little bit of side to side wobble, but it’s not noticeable during regular use.

Though there is a fire button, it is also draw activated (auto-draw). You can choose to turn the fire button off which is perfect to avoid pocket firing and the auto-draw still works, to do this is a simple 3 x FIRE, and button and the LED will flash to confirm. To turn the device On/Off is 5 x FIRE.

That’s all there is to it. The power setting is automatic for the chosen pod resistance, so there’s no adjustable wattage which makes it simple for new vapers. Generally I prefer adjustable power, but the pre-set power is spot on for each pod I tested.

Filling the Miso Pro is an absolute mess free doddle and is another strong feature of this pod kit. There a little silicone bung on one side of the pod which is easy to pull open, there’s plenty of room for your juice tip, and tipped on one side you can fill it up. The vision through the transparent mouthpiece shows your juice level.

Univapo have absolutely nailed their coils as the flavour is outstanding, both coils offer such a rich, intense flavour and a smooth vape. Although it doesn’t have adjustable power, it is spot on with the warmth; not to cool – not too warm. It also keeps up with chain vaping and I’ve never come close to a dry hit.

Battery life is impressive even with the 0.8ohm coil and it lasted me most of a working day. The 1.2ohm coil did last me a full day and well into the evening. The charging time was even more impressive as it offers with 2amp USB-C, on average it was under 30 minutes from low.

The auto-draw works flawlessly to the point that I found the fire button became redundant. The option to disable the fire button was really welcome to avoid pocket firing so I turned that off and that’s how it stayed. I still prefer having a fire button though as you can turn the whole thing Off/On.

Everything was just perfect up until this point but the airflow control doesn’t quite work as it should; it feels exactly the same no matter which way you rotate the pod. Fortunately the draw is still MTL but is a touch too loose for my tastes. I found that the problem was down to the pod fitting down the sides as there a small gap and you can see the airflow channel so air comes in from there and ignores the actual airflow hole. Basically the side notches are a fraction too deep for the pod.

But don’t let that put you off, usually this issue would have been a major con but the draw is still good and is acceptable for a pod as I have had much looser draws from other kits. It’s the flavour that makes up for it and I soon got used to the draw, in fact some users may enjoy the looser feel.

Ironically, the fix for this problem turned out to be a silicone lanyard (not included) as I could cover off those two gaps with it. The one included in the Miso C was a bit too small but I had another that fitted, and the draw is now perfect for me. 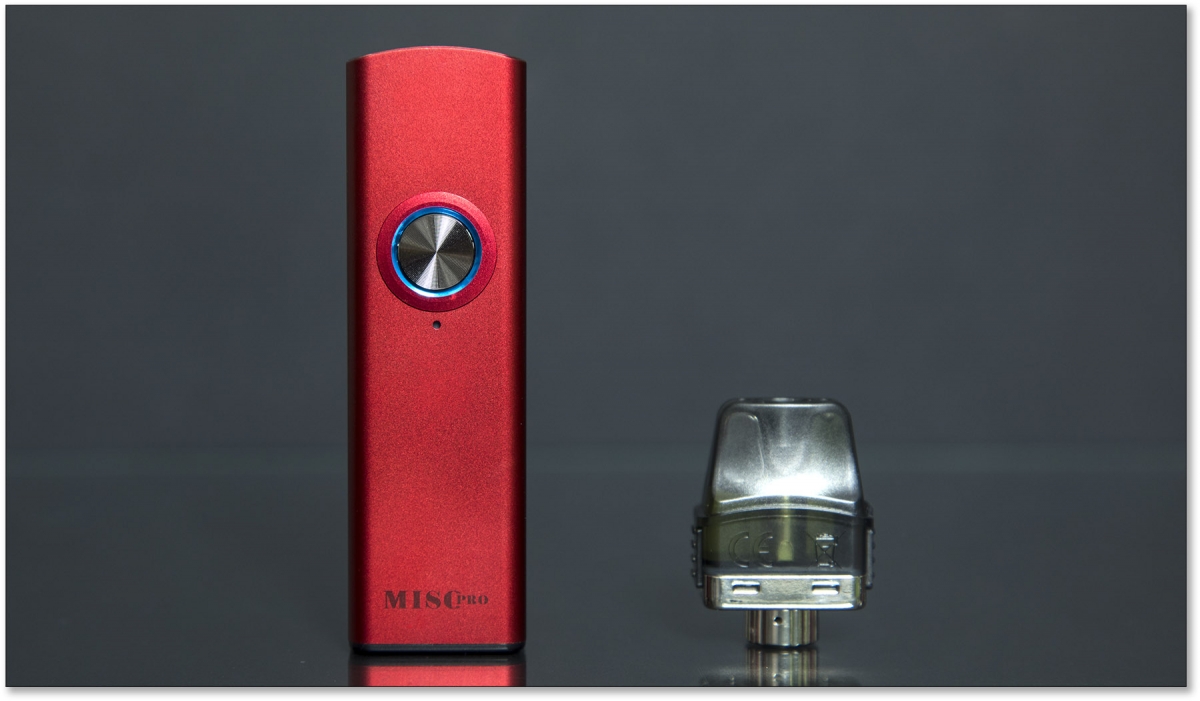 The main benefits that the Pro has over the C are that it takes replaceable coils and has a larger battery capacity. The kit also gives you a second coil (the Miso C only had one pod included), the flavour is equal for both kits but I am a little torn on which I prefer; usually I would always go for replaceable coils but the Miso C’s airflow control wins for me as I prefer the tighter draw. If you prefer a looser draw, then the Miso Pro wins.

The outstanding flavour delivered by the Miso Pro makes this kit stand out, replaceable coils makes it a better option over the Miso C for me as it’s far less wasteful.

It’s just one of those pods that might not look anything special but the vape quality beats many of my quirkier looking devices.

Univapo’s coils have won me over big time. Although the Miso C suits my preferences, the Miso Pro ticks more boxes and is better overall value. I have been flip-flopping as to which I prefer, so either would be a good choice as the flavour is the main thing.