Today for review we have the Surge Ultrasonic Vape pod which was kindly supplied to me for review by Innokin who are manufacturing these devices for Surge.

Surge Vapor have designed this Ultrasonic Vaping Technology which atomizes the e-liquid through high-speed vibration. The ultrasonic chip vibrates at 3 million times per second to split the e-liquid into vapour. Surge state that this means no dry hits, no wasted liquid, and smoother, cleaner flavour due to there being no coil. That all sounds great so let’s see how this performs…. 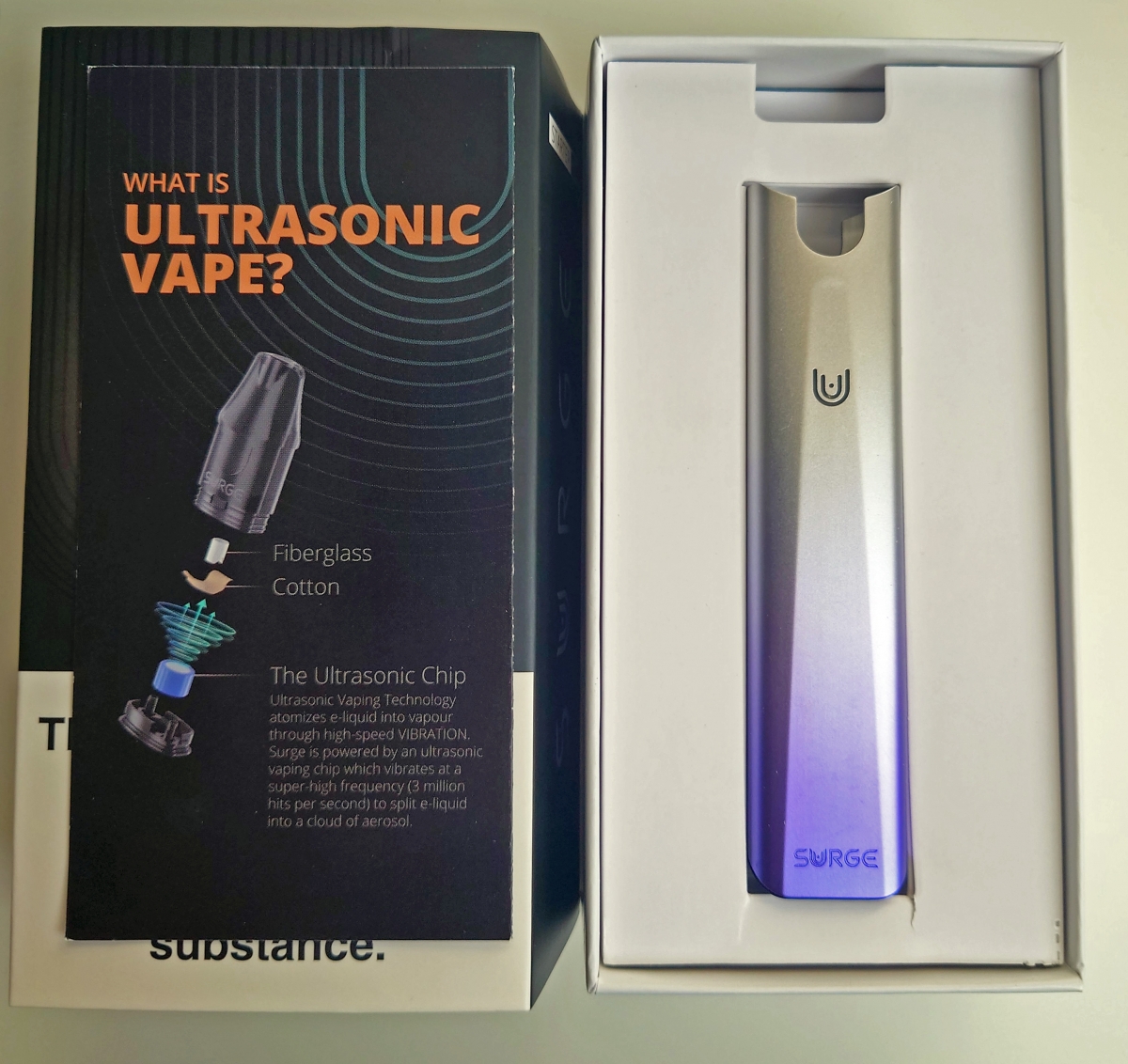 The packaging is very basic, but it is recyclable seeing as it’s all just cardboard and paper. There’s a cover which you just slide to reveal the device. In the box you get:

This is all designed to be a very basic device and to be incredibly straight forward to use, so the minimal packaging and components doesn’t surprise me. The pod itself has a silicone bung on the base and a smaller one in the drip tip which you simply remove, pop the pod in and vape. I do wish they had included a second pod as if there is any kind of issue with the one provided, then the device on its own is useless. They could have included one of the other flavours as the second pod so people can try them both and see which they prefer.
The device comes in a variety of colours – Black, Grey, Green, Pink, and Purple – I was sent a Purple variant and a Black one. 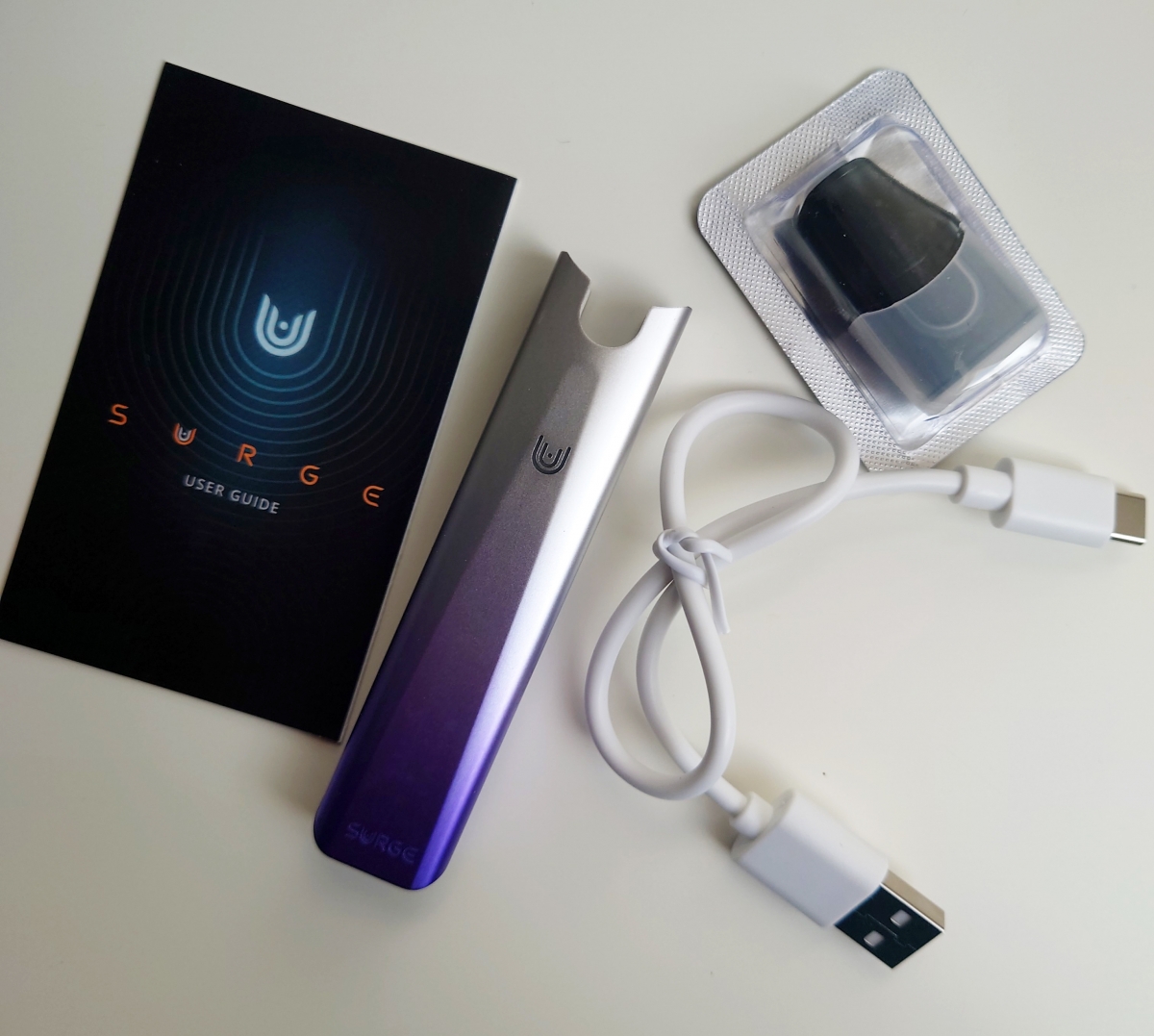 The device itself is the definition of simplicity, there’s no airflow adjustment, no wattage control and no fire button, no button of any description. It’s a nice size at 21mm x 12.5mm x 112mm and the weight feels good, especially as it houses a 700mAh battery. There’s some battery venting holes on the bottom, and on one side you will find the USB-C charging port and a small airflow hole. Charging the battery from flat takes about half an hour, and there’s passthrough so you can vape whilst charging. There’s one light on the device which is in the shape of a little “U” which lights up when you vape, it also flashes when it’s charging, and it stays on fully when the device is fully charged. The light will Flash Red when your battery level is below 20%. The battery didn’t quite last me all day and because there’s no way to tell how much the battery is charged (other than knowing it’s below 20%) then before you go anywhere make sure you charge it as you don’t want it running out whilst you’re out an about. 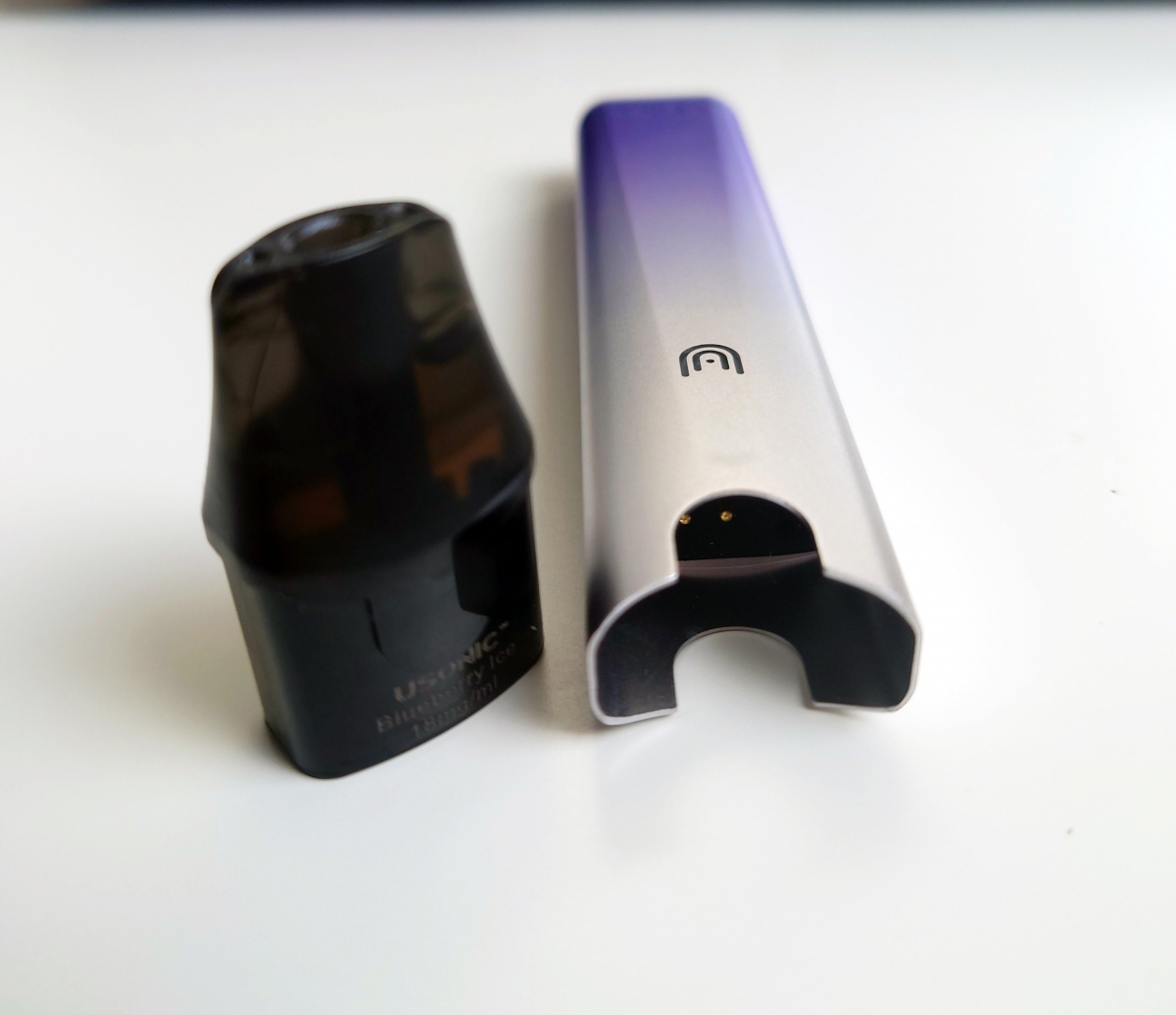 The pods themselves are pre-filled with 1.8ml of 18mg e-liquid which is a hybrid of freebase nicotine and salts, but there’s no indication anywhere of the VG/PG ratio. The pods house the ultrasonic technology so when powered they vibrate and vaporise the e-liquid for you to be able to vape. They have the flavour and nicotine strength printed on the pod so you don’t mix up flavours and these are held in place by magnets which help it slide into place, the magnets aren’t that strong so it’s easy to remove the pods so just be careful when carrying in a pocket as mine have popped out on occasion. There’s not much else to say about the pods really as there’s no fill port because they are pre-filled, but this also means that this device is dependent on these flavours to be good to succeed. In the name of completeness, I took a hammer to one of them to find out what was on the inside. It seems as though the little gold/copper cylinder is the important part; it has a little bit of presumably cotton on the top then the chip within which I assume vibrates and vaporises the liquid from the cotton into the vapour. 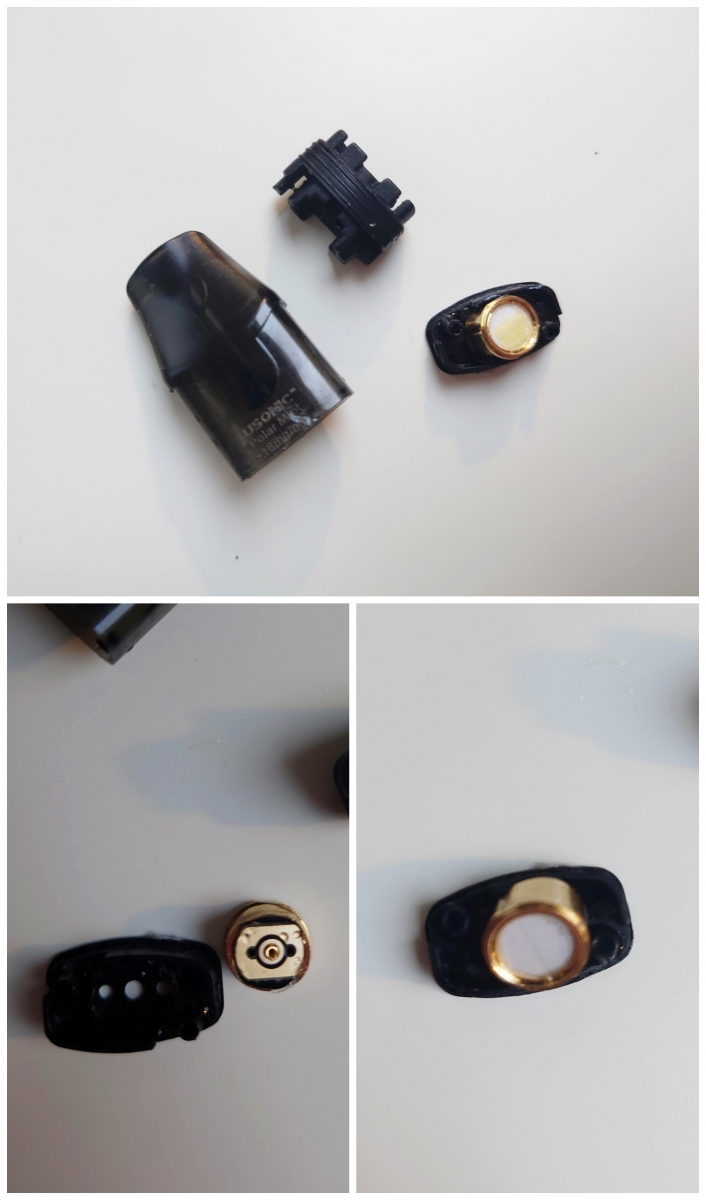 The build quality of the device is superb, as you would expect from Innokin, and the ultrasonic technology is definitely interesting and is a great development away from the traditional coils we normally see in vape devices. The draw from this is what I would call a medium MTL draw but you can cover the airflow hole on the side to get a much tighter draw if you wish. When vaping this, it takes a while to get going so if you just want a short sharp vape you won’t get much from it, it requires a slightly longer draw before it really kicks in and gives you a satisfying amount of vapour and throat hit. When you first insert a new pod, it will take about 4 or 5 puffs to really bring the flavour through, almost like it needs to warm up to get a decent draw.

The hybrid nature of the liquid works well, it gives a decent throat hit and as it’s 18mg, you can really feel it and it quickly satisfies any nicotine craving. One of the pods I used seemed to have an issue whereby the liquid was sat in the chamber and when I took a long draw I ended up with e-liquid in my mouth and all over my lips and because it was one of the icy ones, it left quite the tingle on my lips. 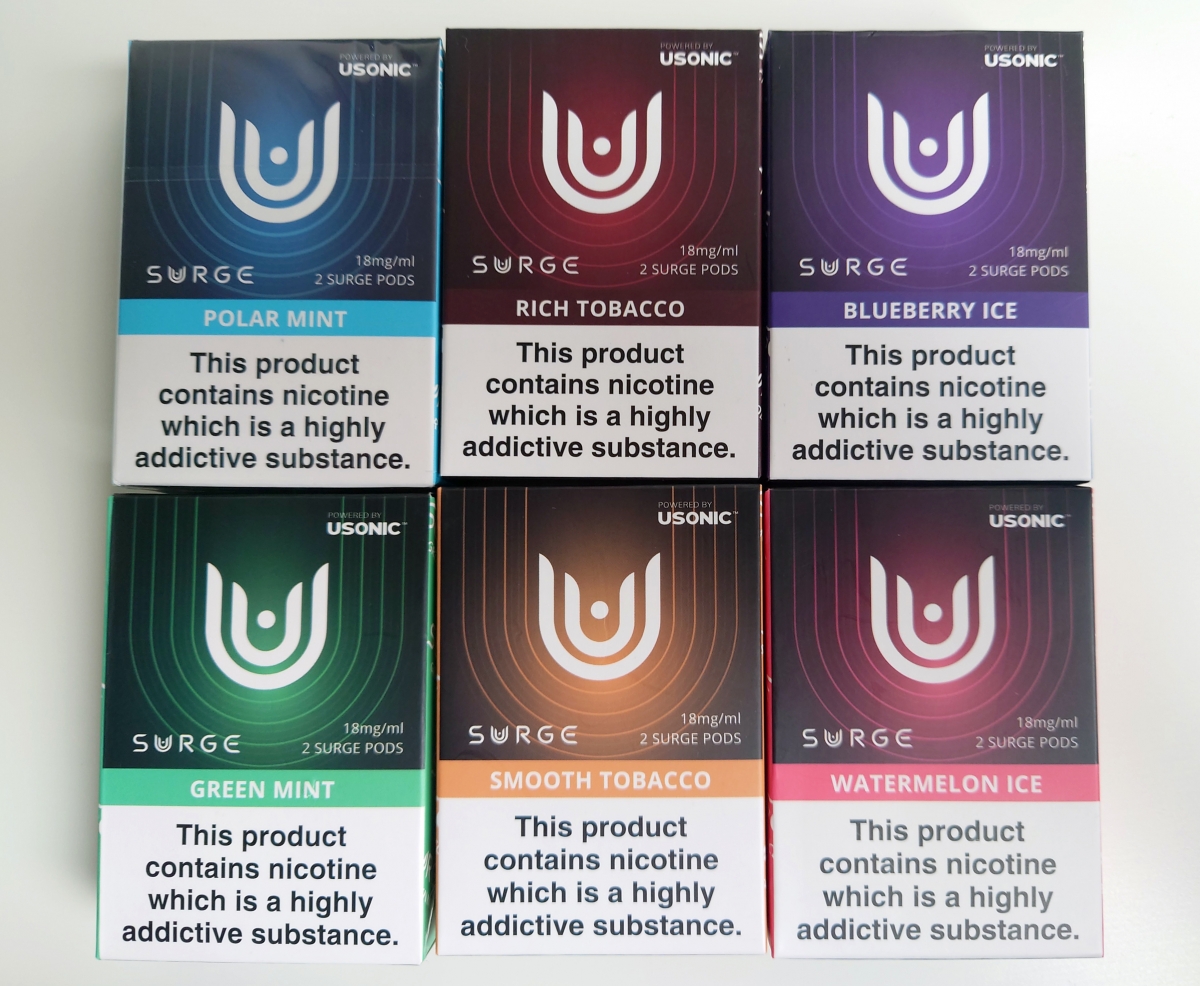 They say - “Our most intense minty offering. Authentic mint notes are paired with refreshing menthol and a bold icy finish. Ideal for those looking for a fresh, neutral profile”

I say – Jesus, Mary, and the Littlest Hobo, that’s cold. I feel like my throat has been cryogenically frozen. I can’t tell whether the effect on my throat is the throat hit from the nicotine or from feeling like I’ve been force fed every polar mint sweet in the world and then gone to the Antarctic and breathed in. The flavour tastes exactly like a polar mint and isn’t bad at all, but that flavour is overpowered by way too much ice.

I say – For the love of all that is Pingu, I’ve got brain freeze. There is a nice mint flavour and some peppermint in there but all apart from the smallest traces have been replaced by the ice. Take one mint leaf, a peppermint sweet, mix them with a load of ice and make an ice cone using a Mr Frosty then load that into a cannon and fire it down your throat as it’ll have the same effect.

They say – “A mild and mellow tobacco profile. Notes of blonde tobacco are interwoven with subtle layers of brown sugar, vanilla, and a light nutty finish. The perfect blend for those who enjoy a decadent tobacco”

I say – Mild tobacco is right, so mild you can barely taste it, it’s more of an afterthought here as there’s just a hint of it. It’s very biscuity with a delightful nutty element and a slight vanilla aftertaste. It tastes like an old school RY4 liquid and it’s actually rather quite nice.

They say – “An intense, full bodied profile, reminiscent of dark fire cured tobaccos which are popular throughout the world. Robust earthy notes come together with hints of nutty sweetness and a mild smoky finish for the ultimate rich tobacco experience”

I say – Dirty but in a good way. It’s definitely a dark cured tobacco bordering on a cigar type taste. There’s a real earthiness to it and it leaves a dirty tobacco taste in the mouth, it’s a robust, deep, satisfying dark tobacco and my favourite of the flavours.

They say – “The bold tropical sweetness of watermelon combines with a juicy mouthfeel and iced finish in this bright, refreshing blend.”

I say – Old Mother Hubbard keeps penguins in her cupboard, that’s a blast. To quote the great Vanilla Ice this one is “Ice, Ice Baby”. There’s a nice watermelon flavour here, it’s got that sweet twang which you can feel lingering in your mouth, but it’s buried under the polar ice caps.

They say - “The bright sweetness of candy blueberry combines with the subtle earthiness and tart notes of authentic berries in this simple but refined blend. A moderate icy finish ensures satisfying refreshment every time”

I say – The description of this one is absolutely spot on apart from the “moderate icy finish”. There’s a lovely, candied blueberry bringing a nice sweetness and combined with a hint of tartness, it’s an absolutely lovely balance and blend of the blueberries but it’s overpowered by way too much ice. If they toned down the ice on this one, it would be an absolute winner in my eyes. 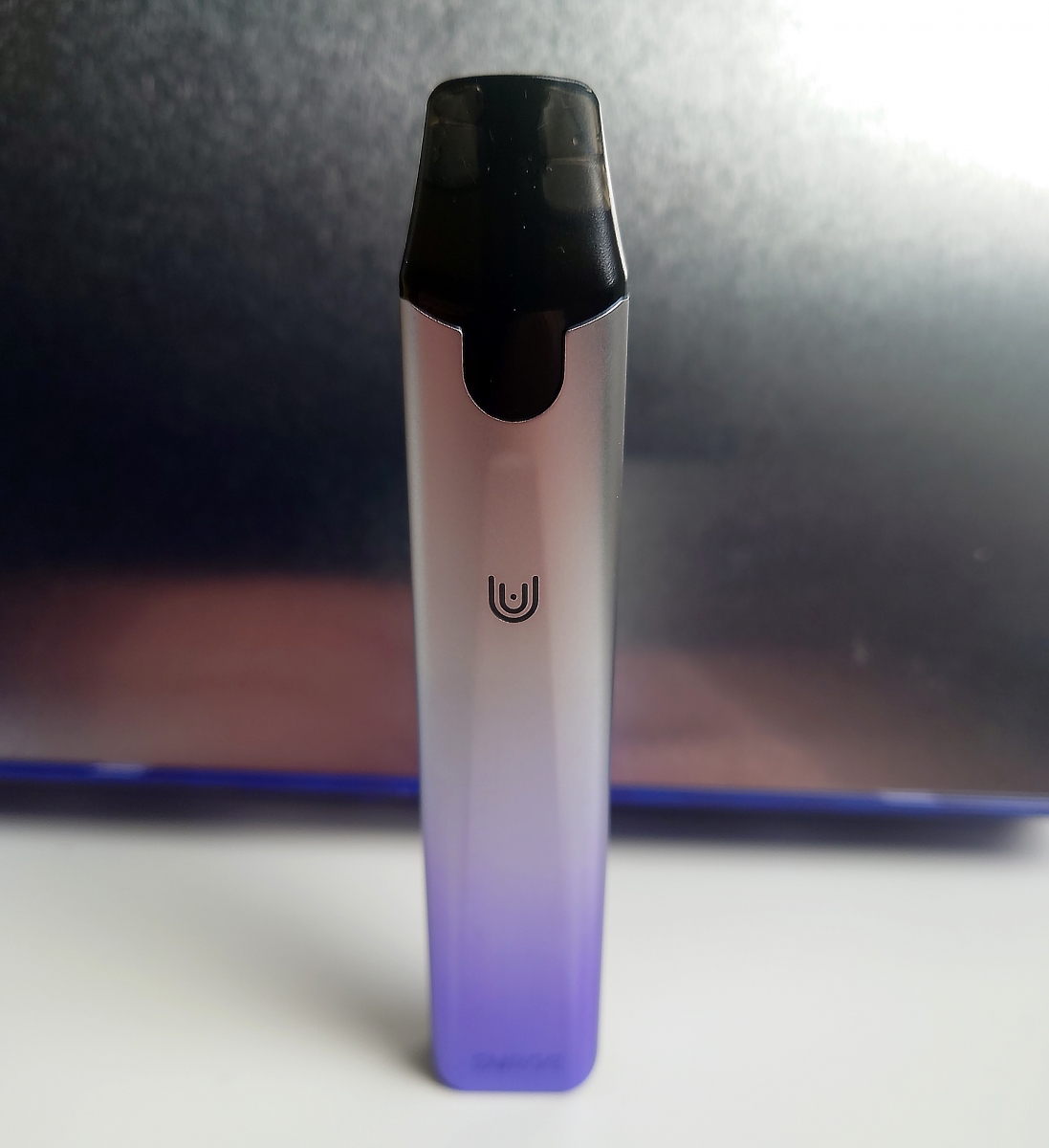 The Surge Ultrasonic pod very interesting entry into the pod market. I’m always a fan of innovation and companies trying to push the boundaries of technology. The fact that these are manufactured by Innokin shows as the build quality is excellent. I’ve not had one dry hit and as soon as the liquid runs out in the pod you just feel like you are sucking on air and not getting a mouth full of burnt taste like you would with a traditional device. The draw is a medium tightness, but it will suit people moving to vaping from smoking, and the auto-draw works really well. It charges quickly and I’ve not had any leaking underneath the pod at all. It’s a well thought out, well made, simple device that would suit smokers looking to quit due to its ease of use, good throat hit and satisfying nicotine delivery.

I don’t like how dark the pods are as it can be difficult to see the liquid level. It can take a reasonable draw to really get a throat hit, and one of the pods leaked liquid into my mouth from the mouthpiece. The pods come pre-filled which is great for people who want simplicity but the issues there are the waste from vaping 1.8ml of liquid and then having to throw the pod away, it seems wasteful, and I wish they could make a refillable pod. The other issue is that with a pre-filled pod you have to have them filled with excellent liquid and it’s here that the device is really hit and miss. The tobacco pods provide really nice flavour, but the others are just too icy. There are some great flavours hiding underneath, but they are so icy, the Titanic would be in trouble.

Overall, it’s a good device and I applaud Surge and Innokin for trying something different, but I feel like it’s slightly let down by some of the flavours being too icy, and the ramp up time may be a little too long for some. 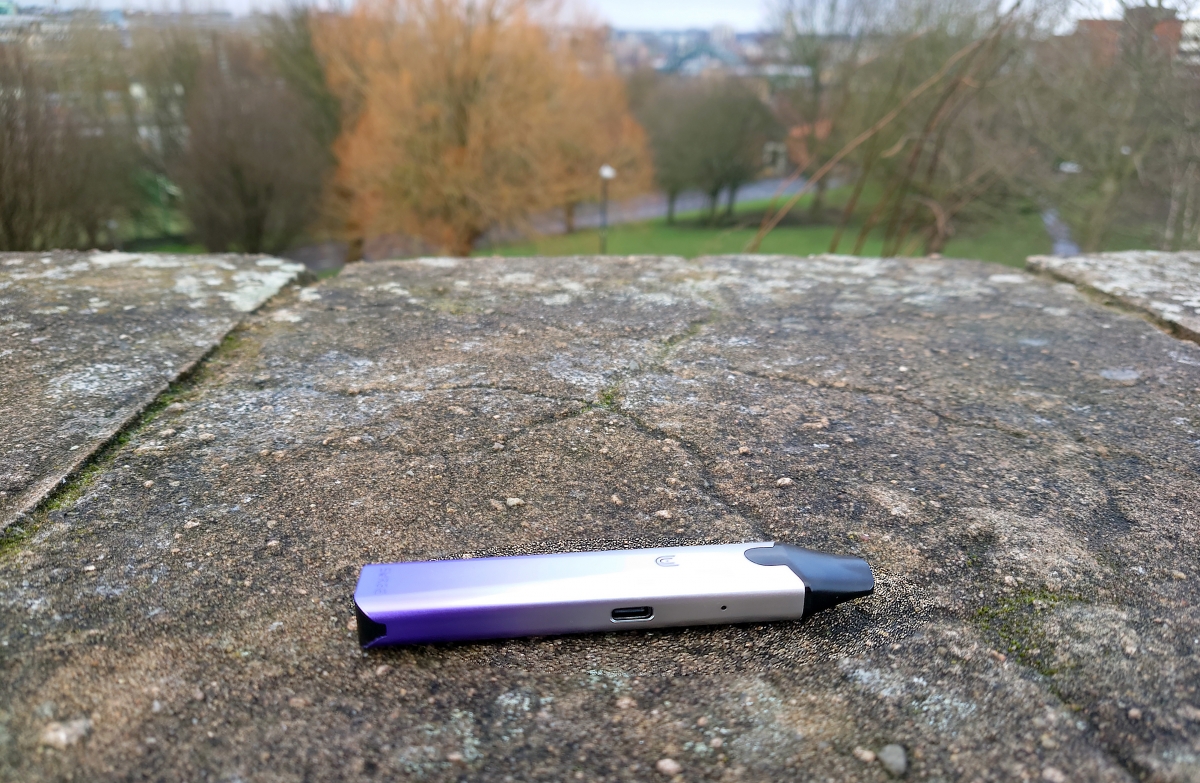