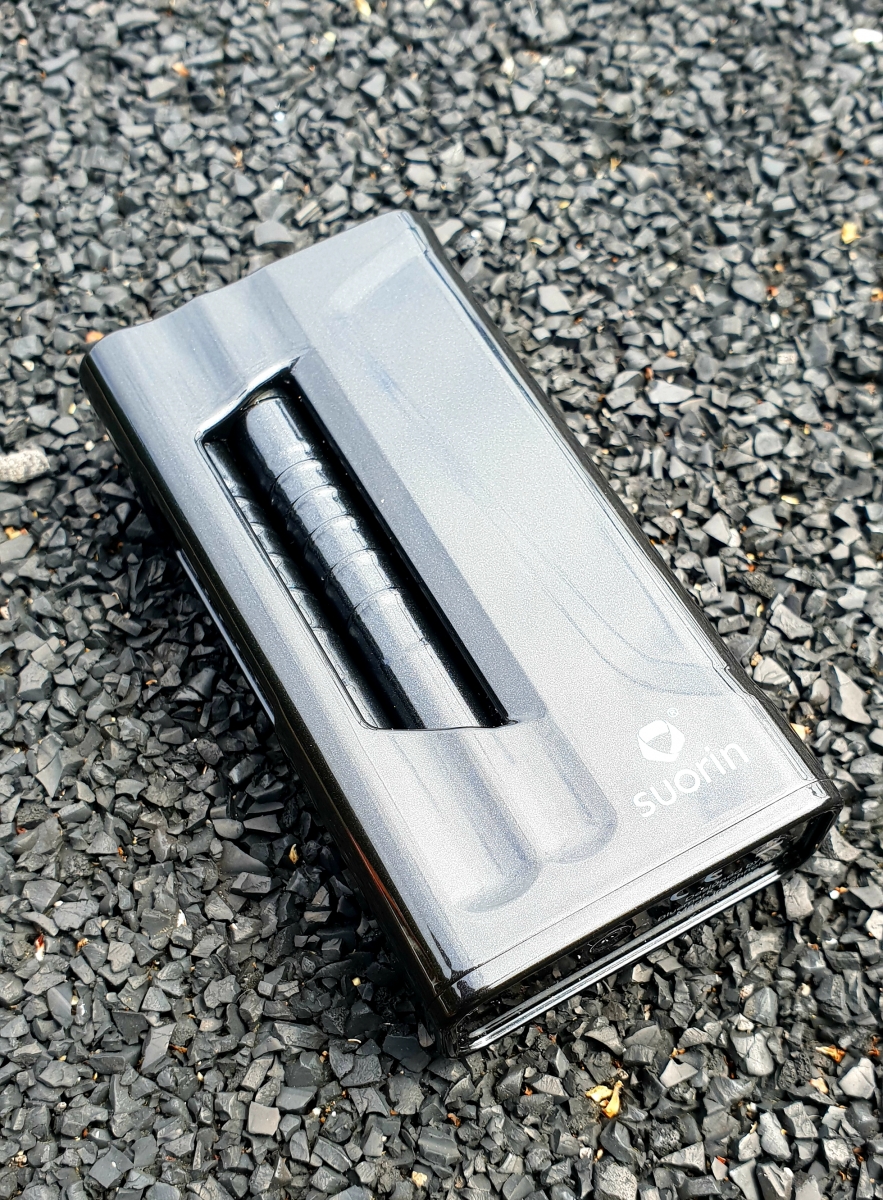 The Suorin iShare is quite unlike anything else found within the pod system market at present, it consists of two Suorin iShare Single pod system devices, and a larger powerbank mod which can charge one or both iShare Singles when on the move! It's a very interesting concept, and I'll be looking at this in further detail below... 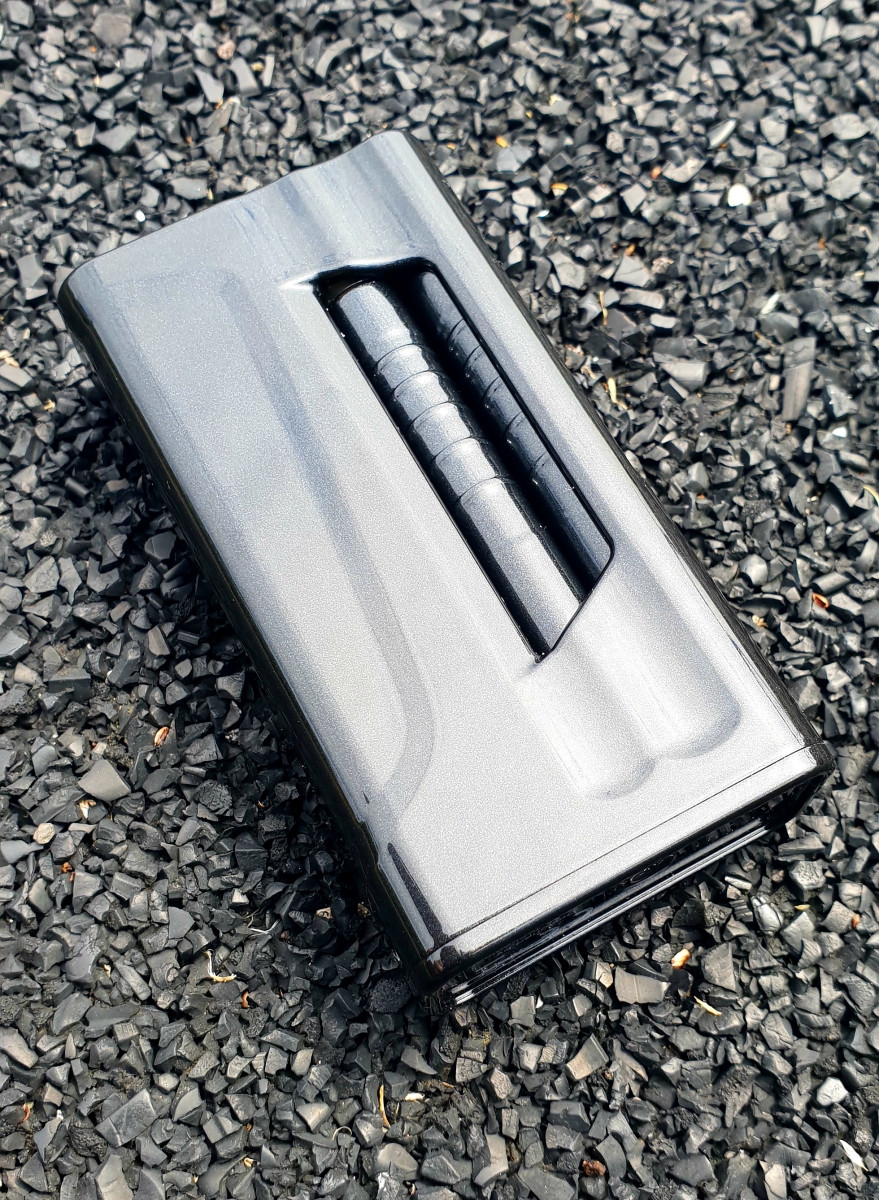 At a glance, the Suorin iShare pretty much resembles your average box mod, and it's small- fitting within the palm of my hand perfectly and light enough to be carried around in my pocket. It sports an attractive glossy finish to it, with the Suorin logo tucked away at the bottom, an LED light indicator at the bottom and a micro USB charging port at the rear.

Obviously this isn't your average box mod- the Suorin iShare itself is a 1400mAh powerbank that can house two Suorin iShare Single pod systems, and it can charge these via magnetic connectors to ensure you get a full day's worth out of your iShare Singles. 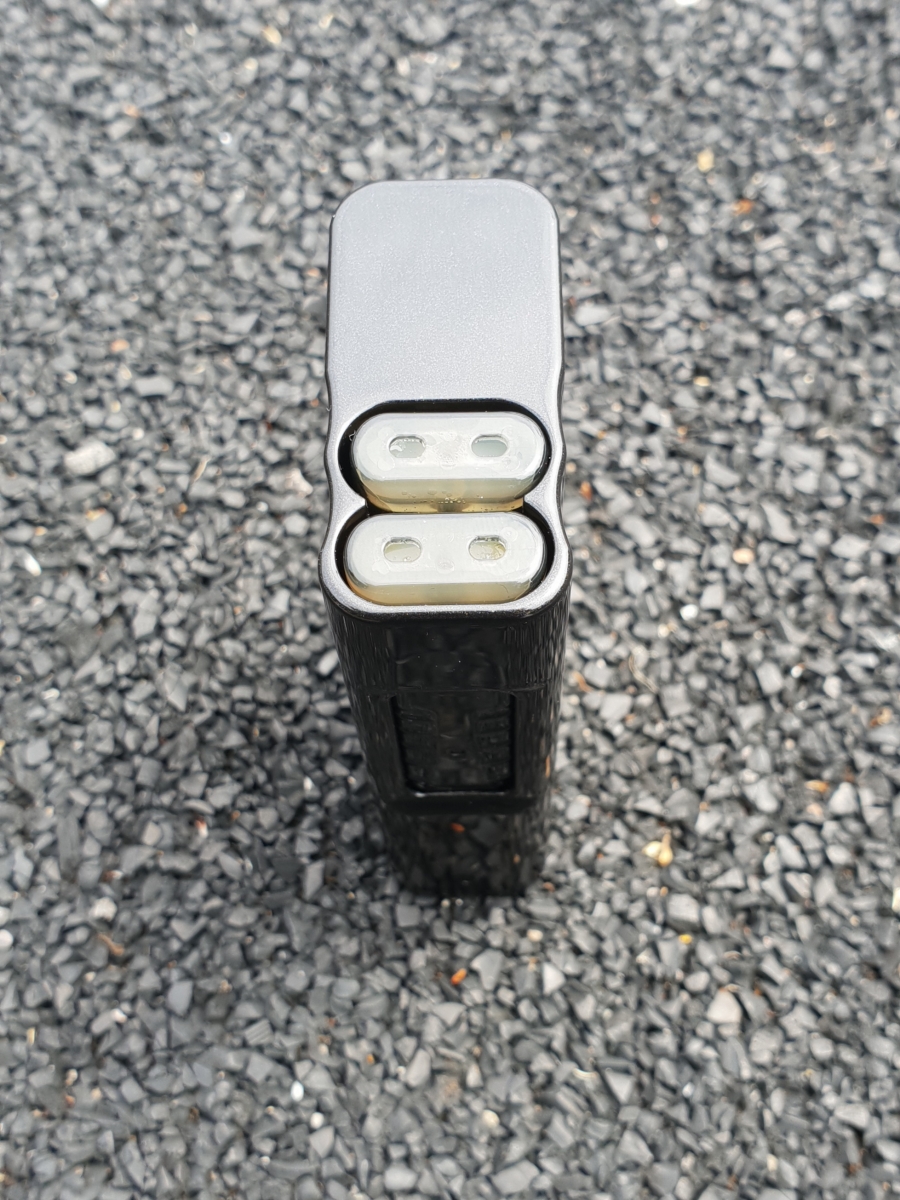 Although an excellent idea on paper, I found that this was executed quite poorly. Both of my iShare Singles never seemed to click into place properly in order to charge, requiring me to jiggle them around constantly so that they would charge! Strangely enough, if I had the powerbank plugged into a USB charging source, this issue didn't occur.

It can also be quite difficult to remove the iShare Single from the front charging port when you are charging both simultaneously, quite often I found I had to remove both iShare Singles at the same time which was quite counter productive. 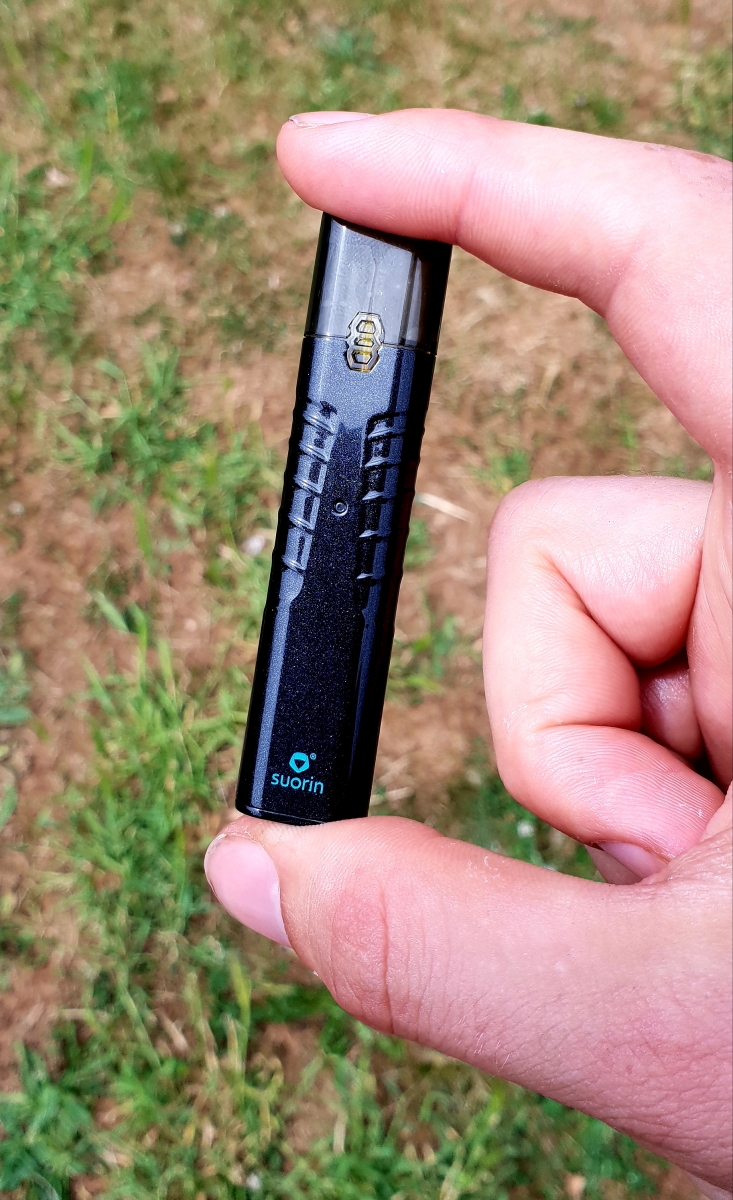 The iShare Single itself can be purchased separately without having to buy the iShare powerbank, this is one of the smallest pod systems on the market at present. It features a 130mAh in built battery, which fires up to 7W, and features refillable pods that have a 0.9ml capacity and a 2ohm coil.

Using the Suorin iShare and Performance

An easy filling system is found on the Suorin iShare Single, simply pop the top of the pod off, remove the silicone bung and fill to either side of the chimney. These can be refilled a good 4-5 times before needing to be replaced, with replacement pods available to purchase separately. Having two iShare Singles in the kit means you can swap between two different e-liquid flavours easily! 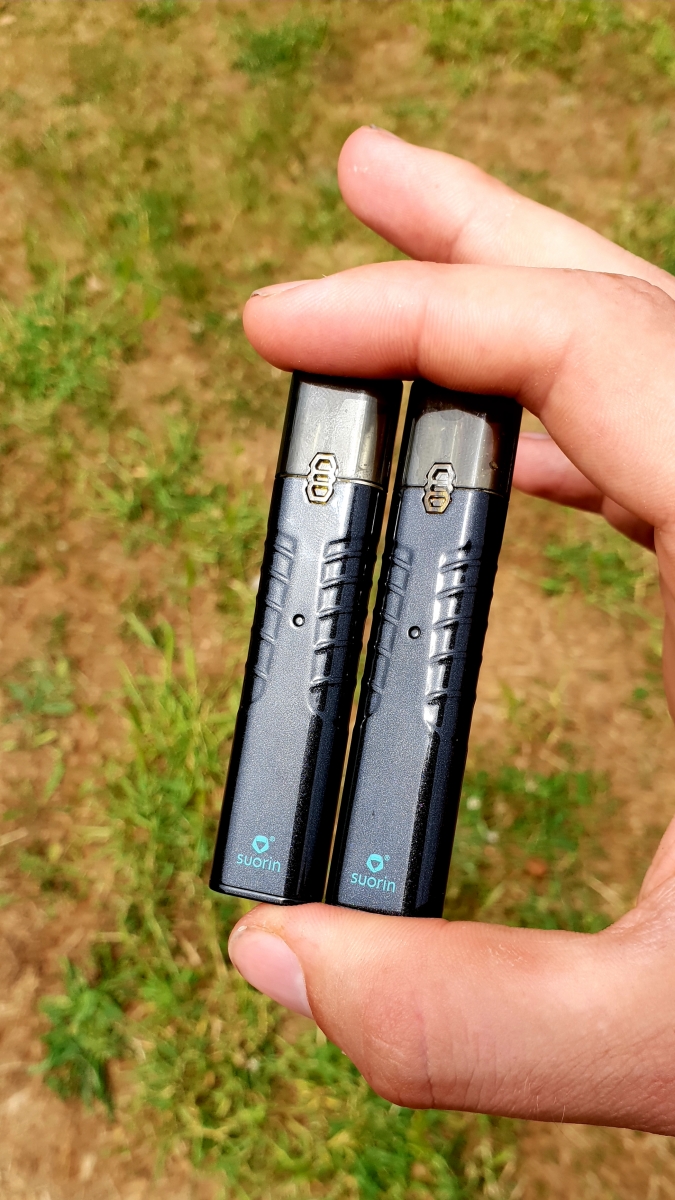 Once you have filled the pod, leave it to stand for 5-10 minutes (I'd also recommend a few dry puffs to aid priming before you first vape on it), and you simply draw on the iShare Single to fire it. The pods don't seem to connect very well to the mod so quite often you need to push the pod down first for it to fire! A blue light on the iShare Single will illuminate when you draw on it.

The iShare Singles do offer a very good vape in terms of flavour quality, and I really enjoyed the draw on them with a fairly loose mouth to lung draw present. As you would expect, the 130mAh capacity doesn't last all that long so they do need to be charged quite frequently.

On paper, the Suorin iShare has some excellent design ideas, unfortunately quite a few of these are executed poorly. My biggest bugbear with the iShare was the inconsistencies I experienced when trying to charge the iShare Singles, which turned something that should be easy into something cumbersome.

It's a real shame as the vape quality itself is really good when it works, and the draw on it is right up there with some of my favourite pod systems.

I feel that if the issues with the magnetic charging connectors, the wicking, and the connection between the pod and the iShare Single can be resolved, Suorin would be onto a real winner with the iShare! 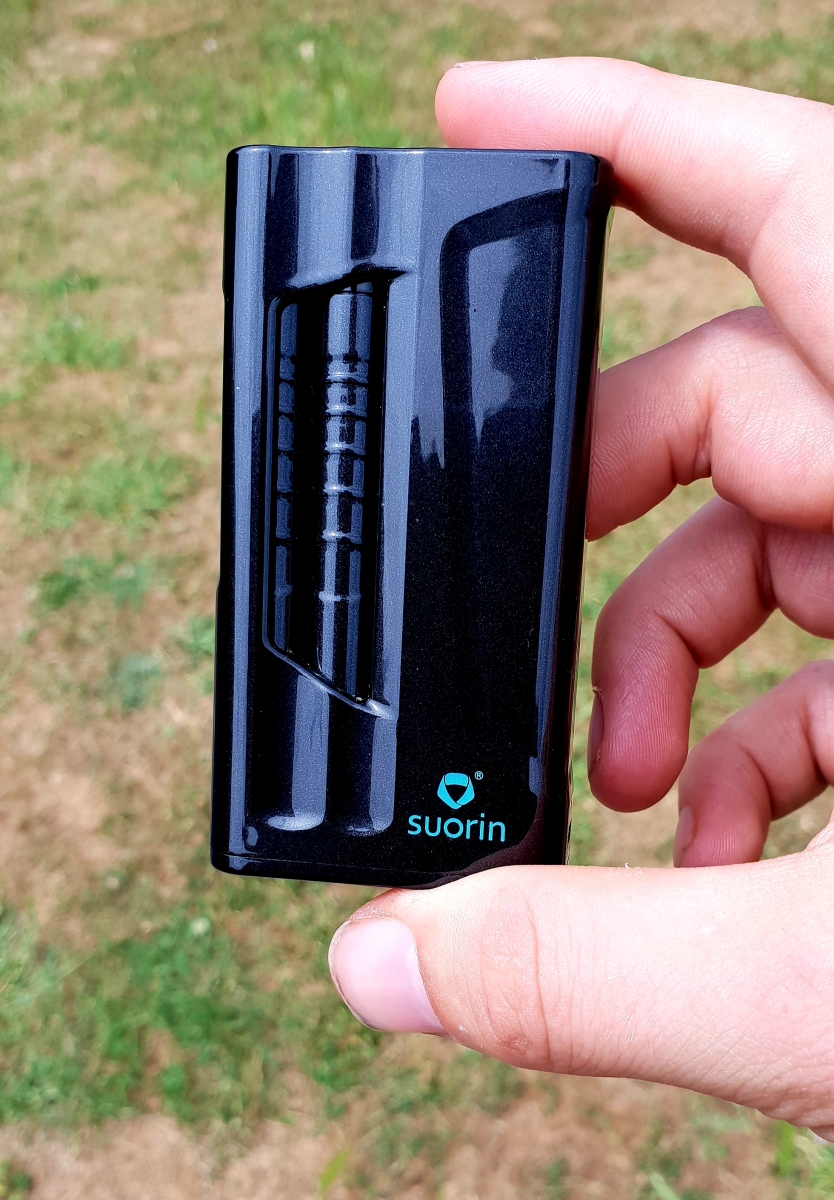