*THIS IS THE PRE RELEASE SAMPLE WITHOUT BOX and MANUAL* 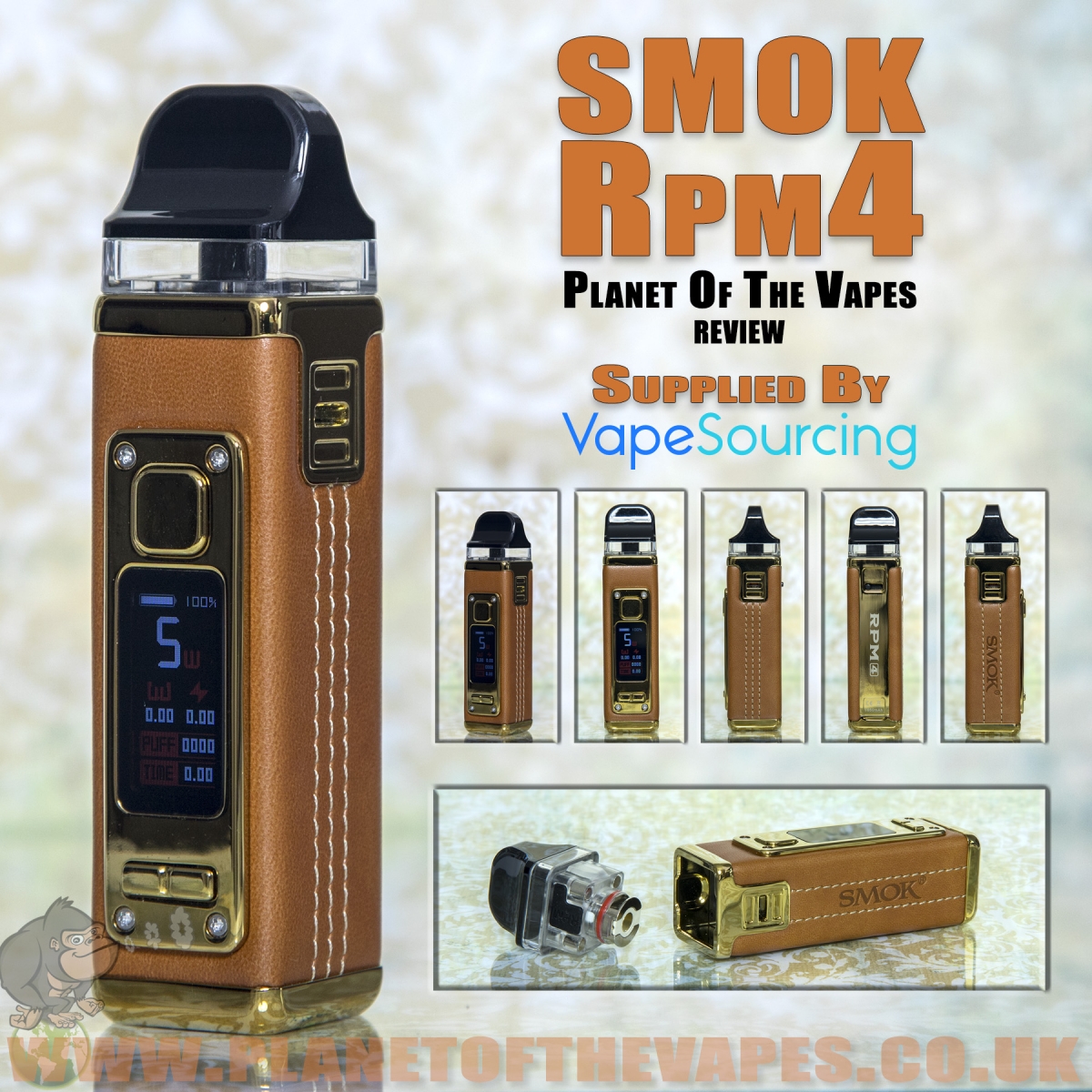 Usually I find some of the quoted features to be bloated to say the least, but I see no false claims here though ‘Fast Refuelling’ is a bit tongue in cheek. 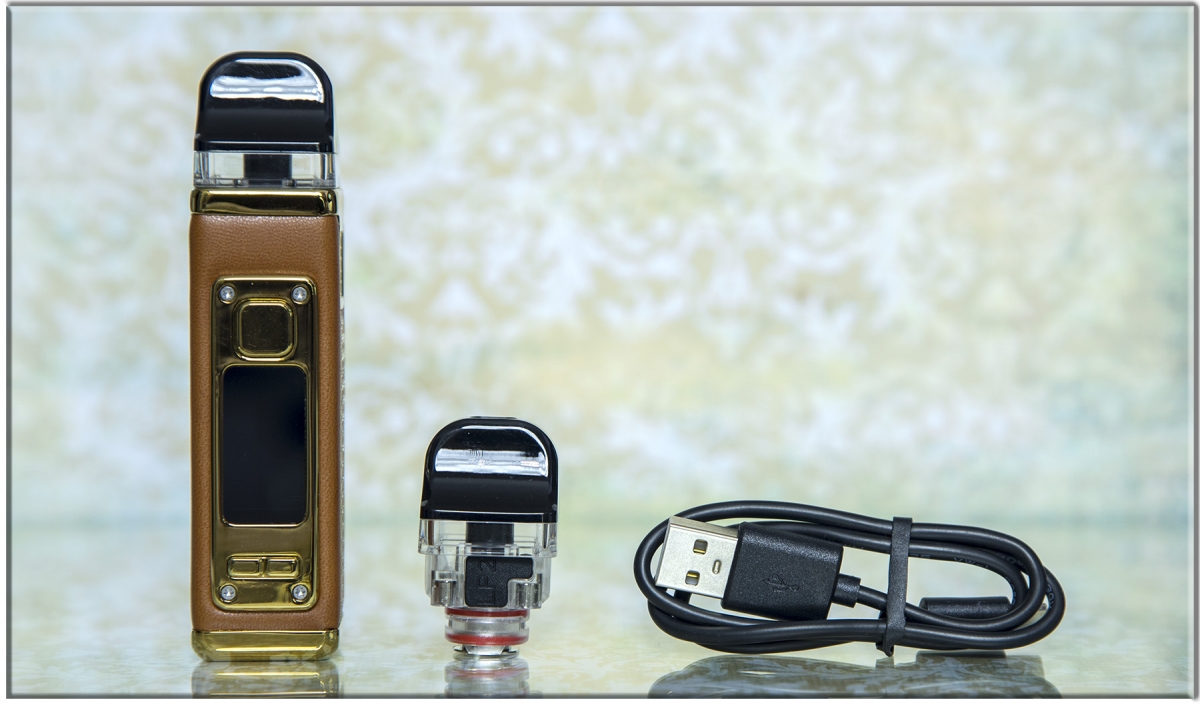 Well this part's easy because I didn’t have a box as it was a sample version. As you can see from the above picture, I didn’t receive a manual either, but here’s what you should expect in the retail package:

The inclusion of two different pods is nice to see and offers two different vapes for you to find your preference or as I found, one is good for home use and the other is better for out and about as it uses less power.

The official spec list is very bloated but here’s the skinny version and the only stuff you need to know:

Without the strip-tease of unboxing, I was straight onto the main course of the RPM4 in the hand. The leather version feels really nice and has an expensive feel to it, the brown leather and the gold metalwork go well together, and the black of the pod and screen contrast well too.

There’s so much going on with this design, every face is different and interesting. I even found myself admiring the base, and the use of screws just looks good, the same goes for the screws on the control face.

I will let the photos do the talking with its looks, as a photographer I found the RPM4 was a great model and such a natural poser which looked great from every view.

I have always been a fan of Smok’s bling designs and the RPM 4 is possibly one of the blingiest pod designs I have seen, especially in the brown/gold version I received. The obvious downside is that the gold is such a fingerprint magnet that I found myself forever wiping it down. 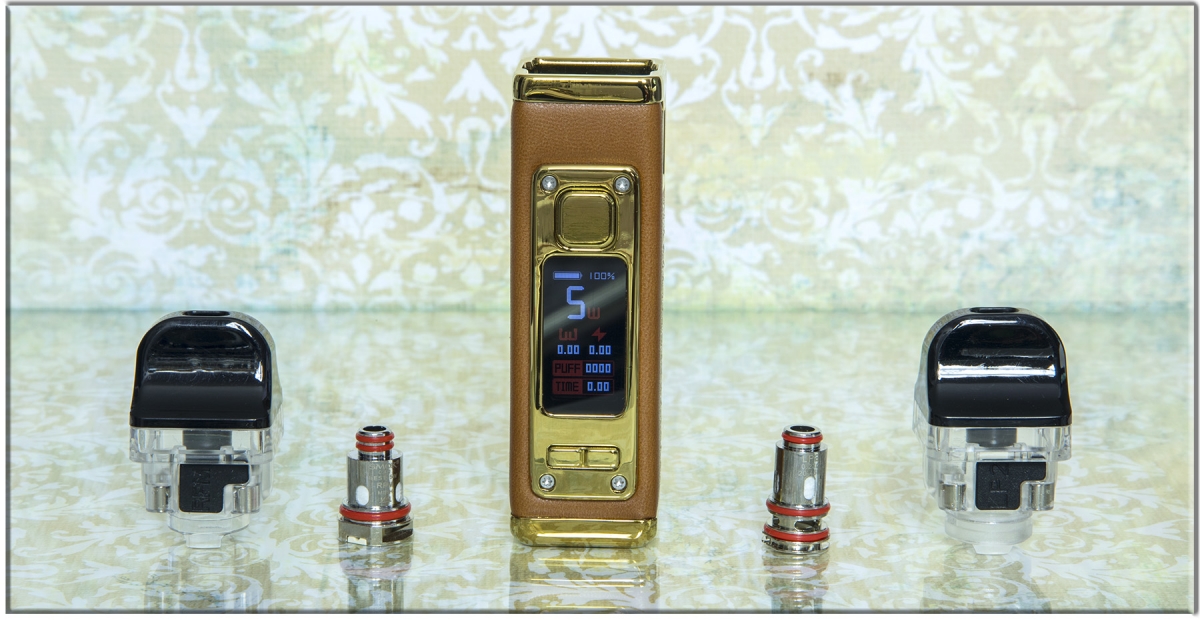 The two pods look pretty much the same but with different coil holes. It’s not easy to tell the difference between the two but both fit into the mod perfectly with zero wobble, and the magnets keep it secure.

It is once that you fit the coils that the difference becomes obvious, the RPM version is pretty much the same as older versions but the LP2 pod has an anti-leak reservoir and the coil has an additional O-ring so the airflow is directed through the reservoir. In theory any excess eliquid that would normally leak through the base is now sucked back up through the coil.

Both are side fill via a fiddly rubber tab, which I found it a little awkward to fill as the port is close to the coil, but I soon got used to it and I found it pretty much mess free.

Airflow control is achieved via a sliding lever on the back face, sliding it to the left is fully open and to the right is fully closed. Well I say fully closed, but it isn’t as air still gets in making the RPM4 unsuitable for a tight draw MTL. Strangely for Smok, fully open isn’t all that airy so the draw felt slightly restricted for full DL vaping, still usable but I was expecting it to be airier. RDL users will LOVE this airflow setup and the adjustability.

Bear in mind I had no manual so here’s what I worked out:

That’s all that I discovered, there’s no auto power setting that I can find but the functionality is pretty much as you would expect from a basic pod system. I do like the colour schemes and the fire button locking feature.

The screen layout is really good, Smok have finally realised we don’t need a logo on the screen. Instead a battery bar and percentage is much more useful, everything is clear and easy to read but it isn’t very bright and is pretty much useless in bright outdoor light. I’m not too bothered by this as once you have your wattage set and locked off, you rarely need to look at the screen other than to check the battery status.

I started off with the RPM pod and 0.4Ω coil which is rated as ‘BEST AT 25W’ and had the airflow fully open using 70VG/30PG juice. As mentioned previously, the airflow is a little restrictive for a full dl draw but more than adequate for the 25 watts. I enjoyed the flavour from this coil and the vapour production was surprisingly high. I did attempt closing the airflow off for a MTL draw but nah, it was crap for that (unless you like a sloppy MTL vape?).

Where this kit excelled for me was the other LP2 Meshed 0.23ohm DL Coil which is rated between 25-45 watts. 25 watts wasn’t too shabby if you prefer a cooler vape but I found my sweet spot to be 40 watts which gave a damn good, flavourful, dense vape. The airflow seemed a little looser on this pod but still not what I would call a proper loose DL draw. I found myself vaping shorter puffs as a result but I still enjoyed it a lot. The downside to this pod was that the battery life wasn’t great, it lasted me around six hours of frequent use.

Out of the two pods, I definitely preferred the LP2 pod and coil as it gave a more intense flavour and warmer vape. It also offered a decent enough vape at 25 watts if battery life is an issue. That said, I liked that I could always swap over to the RPM pod which is better at 25watts than the LP2 so I’m glad Smok included the two options.

Charging was reasonably quick and the screen display was perfect as it shows the battery bar animation along with the percentage and the time remaining. It charges at 1.5 Amps which is reasonable for a small device, and from 30% it took less than an hour to get to 100%. General out and about top-up charging was very effective using a USB power-bank which made it a better all-dayer.

I found the locking features very useful, especially the fire button (3 clicks to lock) so accidental firing when stored in your pocket or bag would be rare. I tended to power it off fully mostly as it booted up pretty quick.

Coil life wise, I tested the RPM for a few days but I’ve mainly been hammering the LP2 coil. It keeps up with chain vaping and is still going strong after a week of excessive use, and I expect it to last me a good 3 weeks of general use.

As for the leak resistant feature, I didn’t have any issues with either pod, mostly due to using them regularly. Pods and tanks generally leak when left unused for long periods of time so I suspect even the LP2 would eventually leak if left unused for a few days. I am in the habit of storing pods upside-down to prevent this.

I’m not a fan of the ‘Duck-bill’ mouthpiece though, I wish they had made it a proper ducks bill shape and oval instead of the squared off edges. It beats a ducks ass mouthpiece though (don’t ask me how I know that!). 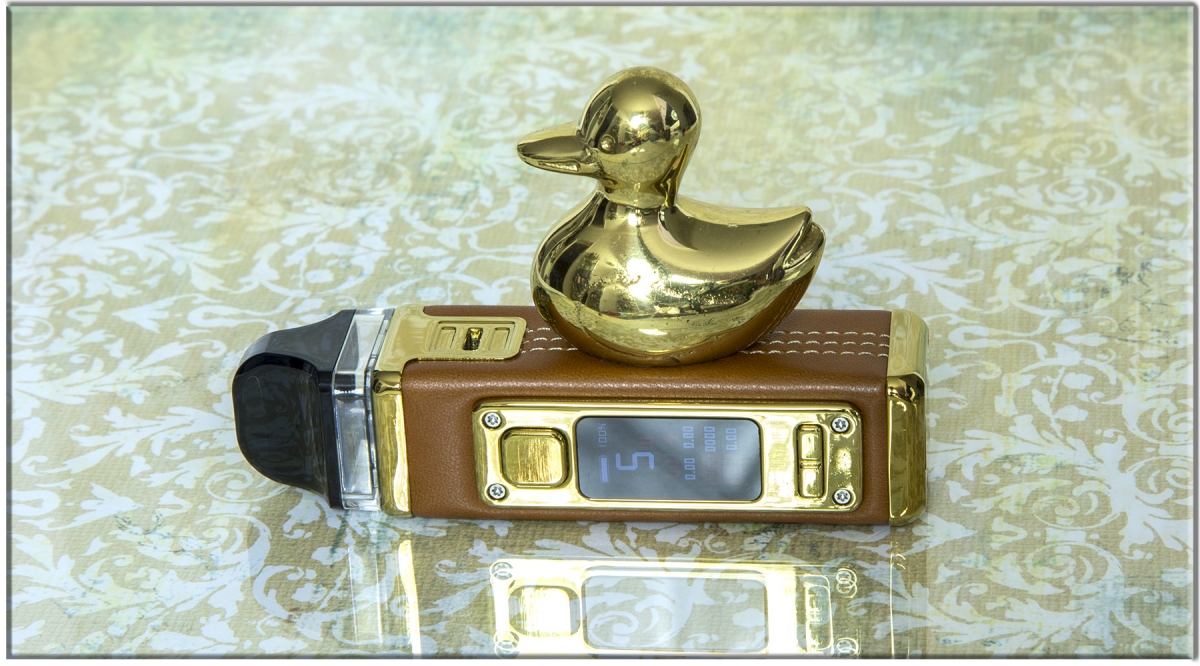 The Smok RPM 4 is a really nice pod kit but the slightly restrictive DL draw makes this kit more for RDL users or sloppy MTL at a push. For me I found it a good option for out and about and in the car. Generally I really enjoyed using this kit and I absolutely loved the styling, despite it being square I still found it very comfortable to hold and vape.

With the above in mind, I think Smok fans will love this kit as much as I do. There are better pod systems out there but few look as good as this if you like enjoy the Smok designs.

I’ve always liked Smok products but rarely enjoyed their pod offerings until this year, not only have they finally nailed MTL pods (Novo 4 and ACRO), they have achieved a damn fine RDL option with the RPM4. It looks and feels posh to me and I often find myself admiring it in between vaping, for me that’s part of the pleasure of vaping.

The easiest way I can describe how much I like the RPM4 is this. As I receive far too many kits to use after reviewing, I more often than not give kits away after I’ve finished reviewing, I fully intended to pass this along but I’m having second thoughts and have already ordered a pack of coils – proof of the pudding? 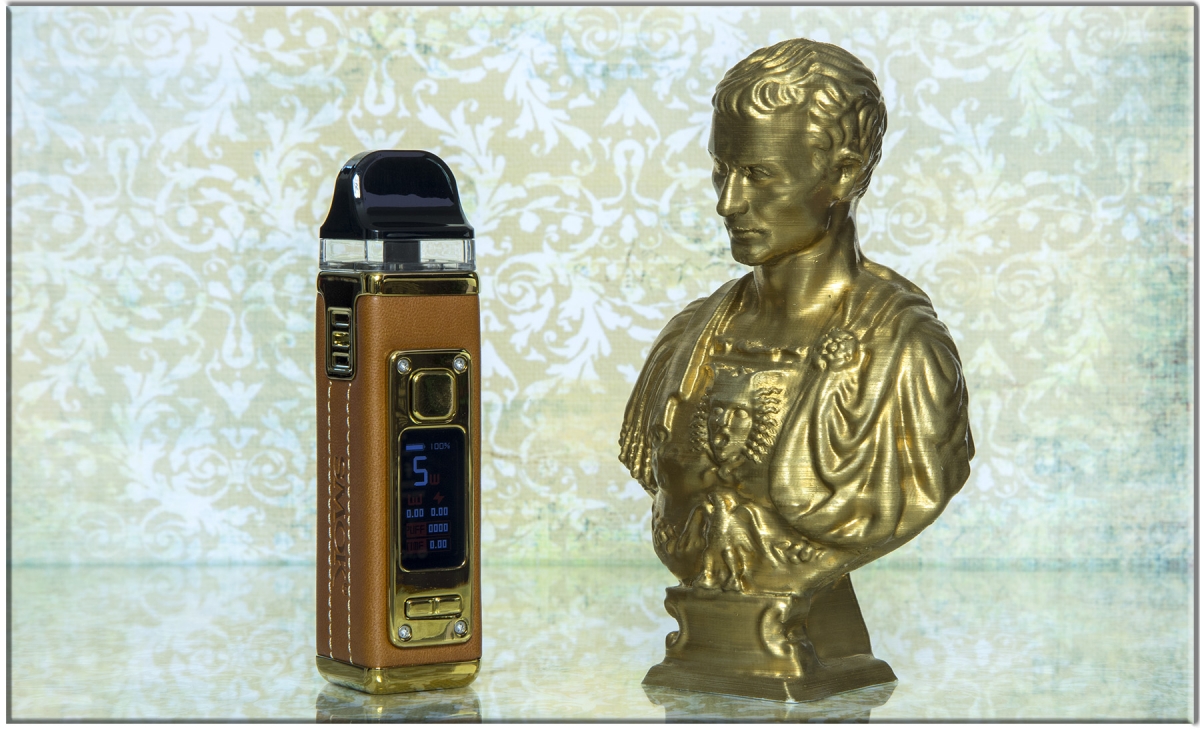