I first came across the Smok fetch mini at vaper expo in October last year, sadly no units were available for sale as production wasn’t up to full speed at that point and it wasn’t due for release until a few weeks later. It’s part of the RPM/Nord family of “pod mods” and was being pitched for its diminutive size and use of more premium materials which included the rather unique glass side panels. I came away from the Smok stand impressed by both the form factor and the performance from the rpm coils but disappointed that I couldn’t purchase one on the day. A few weeks ago I came across a great deal on EFun.top as part of their pre Chinese New Year promotion offering the fetch mini kit for the bargain basement price of just $17.99, there were a couple of other items I wanted to order anyway so I figured at the price I’d treat myself and see if it lived up to my initial impressions after my brief encounter with the kit at expo. EFun.top didn’t disappoint with their service, I had the kit delivered here in the U.K. just six days later by Hermes, excellent service all round.

The fetch kit comes in a cardboard sleeve with a photo of the kit in your chosen colour on the front, list of contents on the back and a scratch ’n’ sniff authenticity code on the side. Removing this, you are presented with a robust white cardboard box with a large fetch logo in silver, and lifting the lid finally reveals the fetch mini with a rpm compatible pod preinstalled. On the next layer down, there’s a brief but useful user manual, a card showing the correct way to install coils and a QC card, and finally under these there’s a Nord compatible pod, two coils (one for each pod) and a standard usb charging cable. 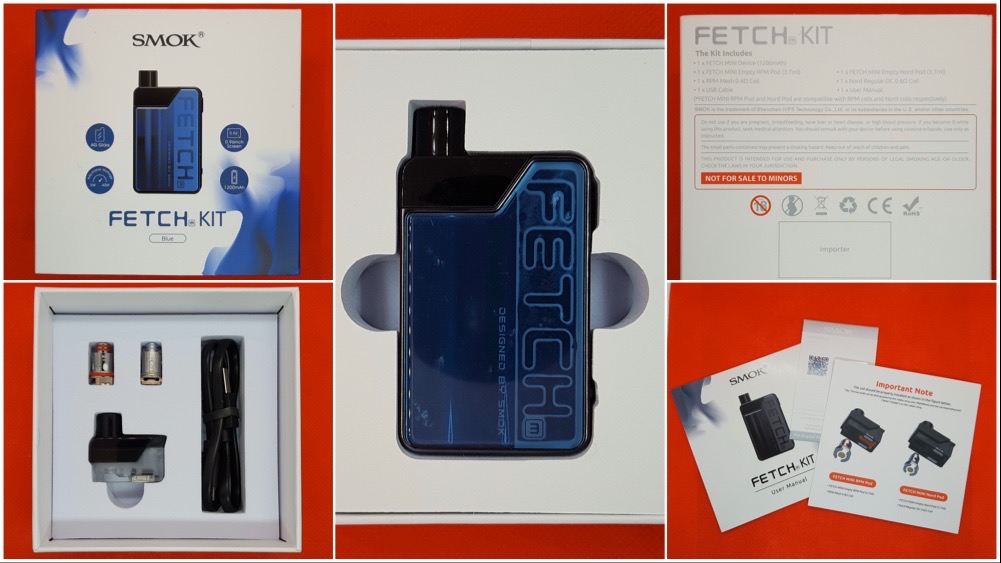 Upon first taking the fetch mini out of the box you realise it does live up to the “mini” part thanks to its diminutive 76x42.8x18.4mm frame, however it’s surprisingly heavy for its size, weighing in at 105grams thanks to the more premium materials used and those glass side panels which are every bit as stunning as I remember them being on my first encounter. I just love the way the light shimmers off them.

The main frame is constructed from zinc alloy which smok says have ten cnc machined cuts, giving the fetch mini a pleasant rounded finish, there are no sharp edges at all. This is all finished with a high quality pvd coating which feels very durable and even after several weeks of use, there’s not a scratch or ding in sight. The buttons feel as if they are made from the same material and have a similarly rounded finish. The power button feels solid with a nice tactile click but there is a teeny bit of button rattle from the up/down buttons which is a little disappointing. Also on the front is a vibrant 0.96 inch colour screen similar to the one found on the RPM40 and a usb charging port. Amazingly, there’s not a screw in sight. I’m assuming they have been cleverly hidden under those glass panels. Underneath, there are a few battery venting holes and up top is the recess for the pod. Looking into the recess, there are two spring loaded contacts and a large magnet to hold the pod in place with a QR code printed on the magnet. You can also see from here that the shell of the Fetch is substantially thicker than the RPM40. For those that are curious, the QR code will direct you to a page displaying your serial number and production date and enter you into a lucky draw (sadly I didn’t win anything)

The high end materials extend to the side panels which smok describe as “2.5D arc-side high-end transparent glass, UV transfer grating texture, combined with AG process and nanoscale AF optical coating” which have a 7H hardness rating similar to modern mobile phone screens so they should be durable. They come with plastic screen protectors installed for shipping but if you’re the type of person that tends to wander around with a broken mobile phone screen then this mod might not be for you although smok do offer a 30 day replacement warranty on the glass panels just in case. Smok have also just released pictures of the second wave of the fetch mini which comes with acrylic side panels instead if you’re worried the glass panels might not stand up to daily use. 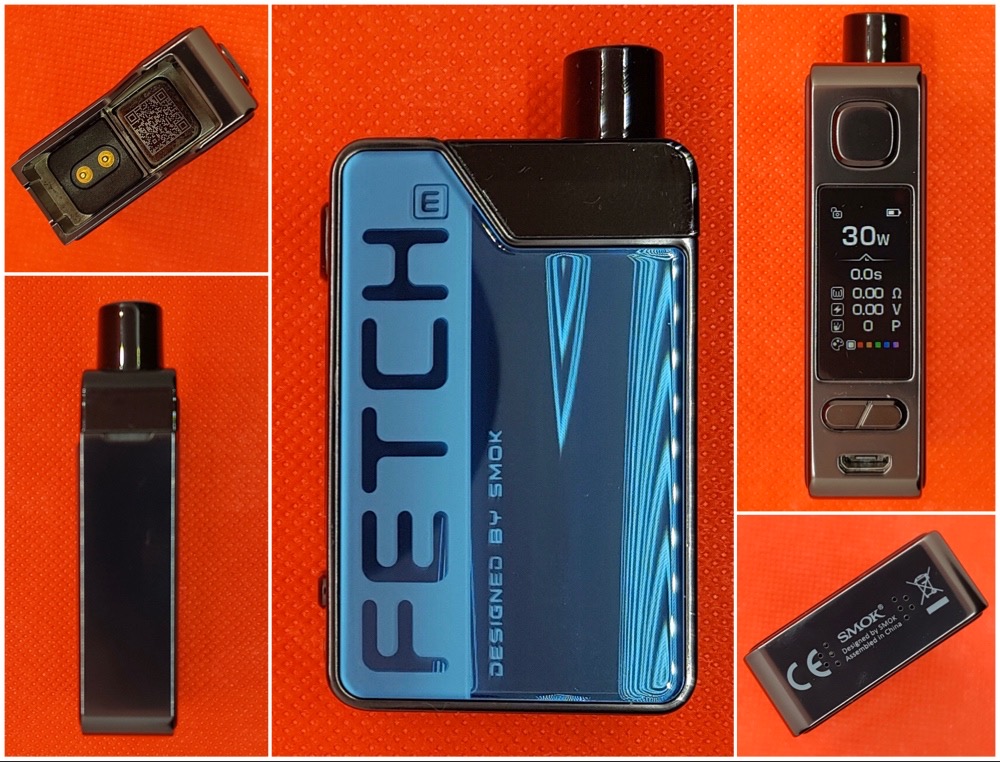 There are two pods included with the fetch mini kit, one pod is for Rpm coils and a second pod for Nord coils, and you also get one coil for each pod. The pods have a 3.7ml capacity and are constructed from PCTG so should be resistant to most eliquids, although caution should obviously be used with known tank crackers. Air intakes are situated at the bottom along the outer edge of the frame and on the top edge of the pod away from the drip tip. As before, there’s no airflow adjustment available.

Coils are simply press fit from the underside as with previous Nord/rpm kits, and both pods are held firmly in place by two large magnets with the fill plug situated between them. The fill plugs are a little fiddly to open initially, especially the Nord pod for some reason, but do ease up with use and the fill port is a good enough size that filling is not an issue with either pod

To aid in identification, the RPM pod is made from a darker smoked plastic with a red fill plug, whilst the Nord pod is clearer with a black fill plug. Both pods have a darker upper section with an integrated drip tip which is what you actually see in use, and it continues the sleek overall look to the kit and should appeal to those who have been put off earlier kits because of the large duckbill style mouthpieces. But this immediately throws up the problem of not being able to easily see your eliqiud without either holding things up against a bright light or removing the pod to check. 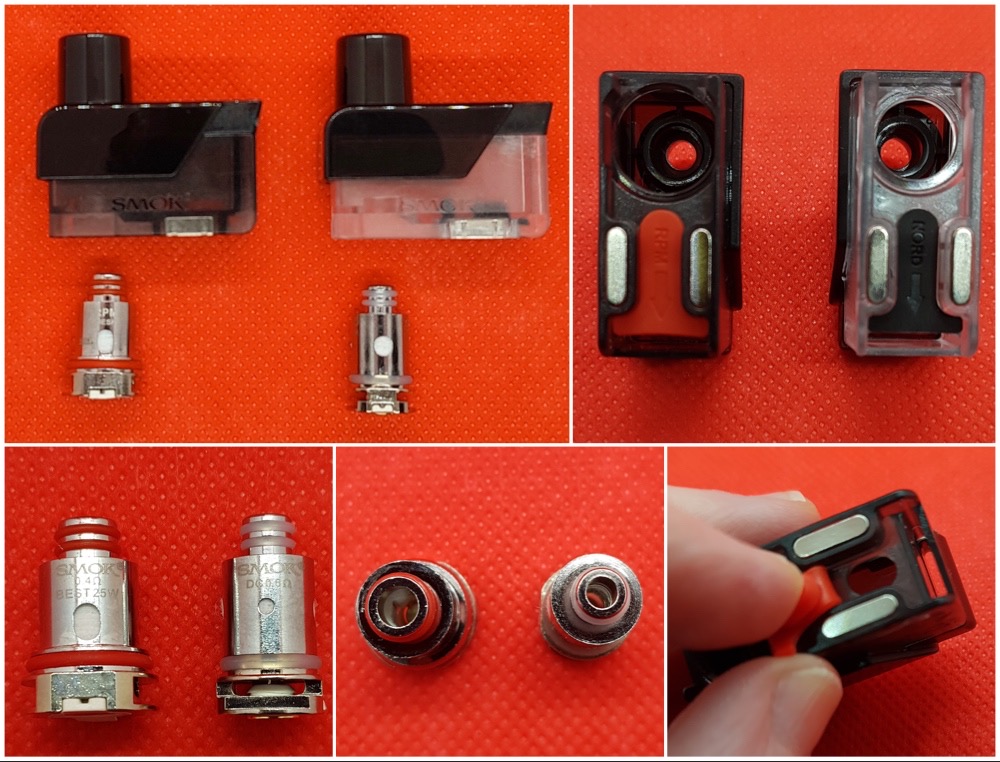 Two coils are included in the kit, a 0.4Ω mesh RPM coil and a Nord 0.6Ω round wire coil.

As I’m primarily a direct lung vaper, I started off with the rpm pod with the included 0.4Ω mesh coil. As with previous versions of the rpm/Nord series, there’s no adjustable airflow so if you don’t like it you're stuck. I did find myself tending to accidentally cover the lower air inlet with my thumb whist trigger firing, which does add a touch more restriction if needed. The Rpm coil performed superbly at the suggested 25 watts, with great flavour and just a hint of warmth. Battery life quickly became an issue here though with low battery warnings after around 200 puffs, with around 30% charge remaining. For comparison, I tried the same coil in my RPM40 and got around 250 puffs.

Next I tried the Nord 0.6Ω dc (round wire) coil. Again, flavour was excellent at around 17 watts, although perhaps not as good as the mesh version. This gave a more restricted vape, but it’s still bordering on a restricted lung hit, so mtl users probably still won’t like this coil. It is, however, compatible with other Nord coils if you have a favourite. Battery life was much improved here with around 350 puffs on a charge, with the low battery warning kicking in with just 23% remaining this time.

The fetch mini charged quickly at 1.1 amps in around one hour and five minutes, with an average recorded capacity of about 1030mAh, just a little shy of the claimed 1200mAh.

Whilst I thoroughly enjoy using my fetch mini and the great build quality, it currently sits in an uncomfortable middle ground between the original Nord and the later RPM40.

Whilst it has all the advanced features of the RPM40, and compatibility with those coils, it simply lacks the battery capacity to work well as a rpm kit with the included 0.4Ω coil, and you’ll quickly become frustrated by the poor run time. Switch to the 0.6Ω Nord coil (or a different rpm coil) though, and things take a different turn thanks to the lower power requirements. Add in things like adjustable wattage and much better build quality than the original Nord, then the fetch mini starts to make a lot more sense.

I also can’t help but think that smok may have also made the fetch mini a little obsolete thanks to the imminent release of the Nord v2, which also features adjustable wattage but with a higher capacity 1500mah battery so you’re primarily getting this for the looks and form factor. However, the fetch mini can now routinely be found at the sub £20 mark so search around if this kit appeals to you. 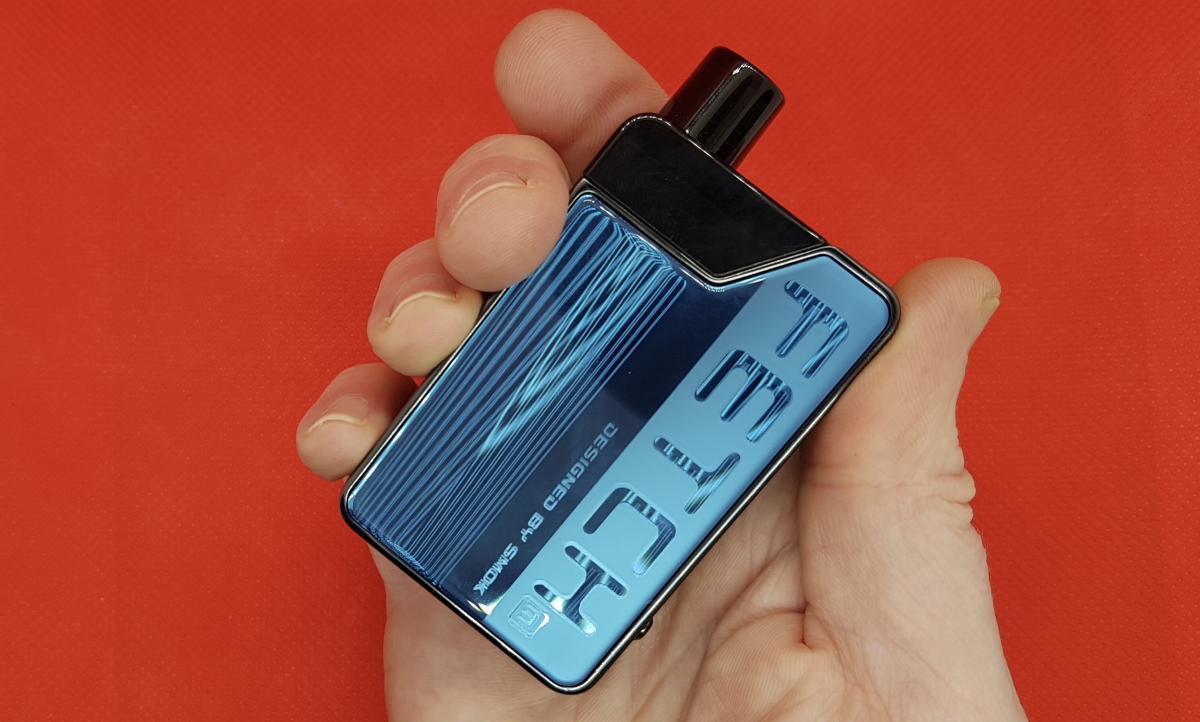