One of the big hits last year with the mouth to lung crowd was the Smoant Pasito, today I’m looking at its bigger brother, the Smoant Knight 80 pod mod, which supports six different coils including the popular pasito coils. This was sent over for review by our friends at Sourcemore. 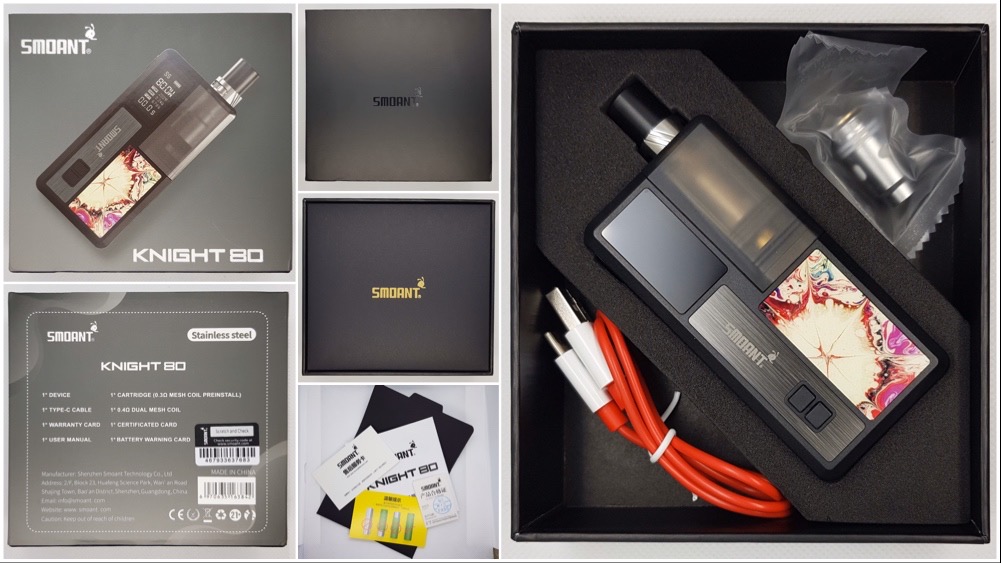 The Smoant Knight 80 kit comes in an outer sleeve with a bold photo of the device in your chosen colour. There are five different colours available and mine came in the “stainless steel” option. On the back is a list of contents along with a scratch ‘n’ sniff security code. Removing the outer sleeve reveals a black box with a silver Smoant logo on the top, and inside you will find a cardboard sleeve with another Smoant logo, but in gold this time, which contains your user manual along with battery safety, QC, and warranty cards. Finally, under this you come to the device itself with a usb-c cable and spare coil cleverly hidden under cardboard flaps in the corners. 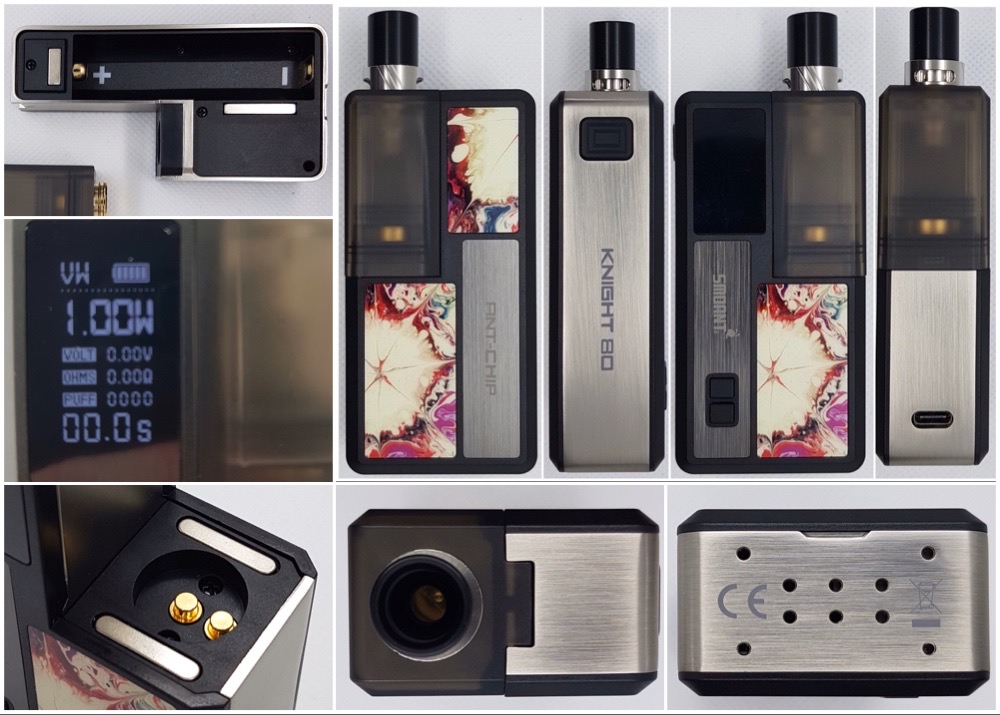 The first thing that strikes you when you take the Knight 80 out of the box is that it’s quite a bit bigger than many other 18650 “pod mods” on the market, it’s around the size of a compact dual 18650 mod. It’s still quite pocketable, although perhaps not in in a shirt pocket. The main chassis is zinc alloy with the side panels constructed from plastic with various coloured panels on them. The mix of panels seems a little disjointed and busy which I’m sure might cause a bit of a “marmite moment” looks wise. I think if they’d widened the brushed metal sections out slightly to line up with the small upper coloured panel and screen, it would have looked a lot more balanced.

One whole corner is dominated by the large 4ml PCTG pod which is secured with a combination of two very strong magnets at the base and a clip at the top. This ensures that there is no movement in the pod and absolutely zero chance of losing the pod accidentally. It goes without saying, therefore, that the Knight 80 passed the shake test with flying colours. Once you remove the pod, the mod almost looks like a side by side mod and the contacts on the underside of the coil are also very substantial so should stand up to extended use.

All the buttons are constructed from the same plastic as the sides (delrin?) with a positive feel to them and no button rattle. The OLED screen displays all the information you need in a clear and concise fashion and is easy to use indoors, less so in direct sunlight as it’s behind a tinted window. Operation is your usual five clicks on/off and three clicks will allow you to change through the available modes (wattage, custom curves, bypass, and temperature control). There’s also full buck/boost capability which is something you don’t see on many other pod mods, plus all the usual safety features you would expect from a modern kit. This is definitely not a cut back budget board, although I was unable to test the temperature control as I didn’t have the optional Rba coil.

Once you remove the side panel, you are presented with a clearly labeled battery sled, but there’s no battery ribbon to aid in removing the battery. This isn’t too much of an issue though as I’ve had no difficulty inserting or removing batteries. The side panel is also held in place with two powerful magnets and snaps in place with a reassuring clunk once they grab hold. There’s no panel movement either. Overall fit and finish on the Knight 80 in general is very good and they’ve gone overboard on the magnets!

There’s plenty of venting on the bottom and a usb-c connector on one edge for charging. During the charge test, it achieved a charge rate of 0.89 amps and everything remained nice and cool. 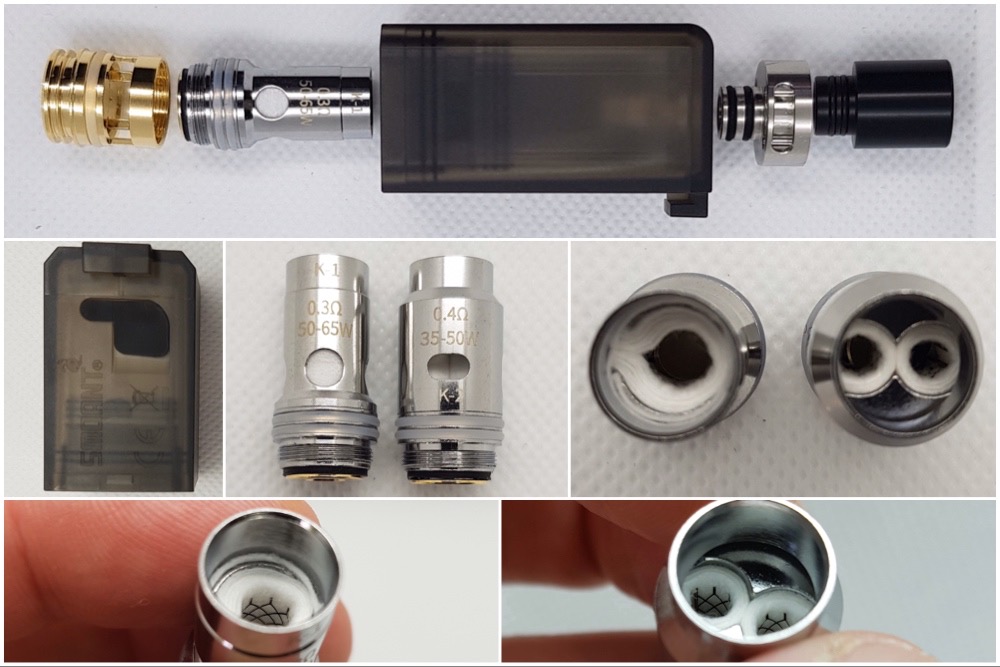 The pod is constructed from the now common PCTG which should be resistant to most eliquids, and has a 4ml capacity (2ml for TPD regions) and, even though the pod is somewhat tinted, I found that it was actually possible to see my eliquid levels easily. The whole pod assembly seems at first overly complicated, with the coils being screwed into a base which is then press fit into the pod with an airflow control/drip tip assembly at the top, until you realise that it’s a top airflow system. Air comes in the top, flows down the sides of the pod into the coil base and then up through the coil. This virtually eliminates the bane of many pod systems namely leaky pods/coils dumping eliquid in the electrical contacts on the mod. The only “leaking” I’ve experienced as such is from filling the pod as I’ve found there’s a bit of knack to it. You need to hold the pod at about 45 degrees and fill fairly slowly otherwise things can get messy quickly!

One thing I would suggest is that you keep tabs on that top airflow assembly, although the drip tip is 510 compatible the assembly itself isn’t. If you do manage to lose it, all is not lost though as it appears to be available with spare pods kits, which generously come with two replacement coils included as well.

Two coils are included in the kit, a K1 0.3 ohm single mesh and a K2 0.4 ohm dual mesh. Coil material wasn’t stated so I contacted the marketing team over at Smoant who kindly informed me they are kanthal so metal sensitivity shouldn’t be a problem. For fans of the earlier Pasito kit, those coils are also supported with an optional adapter but it’s perhaps a little disappointing that it’s not included in the box. Finally, an optional Rba coil also available .

I started out with the K2 dual coil which is rated for 30 to 50 watts. Once you put the pod on the kit, it displays a message telling you that’s what you’ve installed and it defaults to 45 watts. I found it to be quite a warm vape at 45 watts, and it definitely struggles a little at 50 watts. I finally settled on 40 watts which gave me plenty of flavour with a slightly restricted direct lung hit. Coil life also seemed very good with a full 10 days use whilst I was using this as my primary device.

Finally, I moved onto the K1 single mesh coil which is rated for 50 to 65 watts, and this time the Knight 80 defaulted to 58 watts. Even at the 58 watts I felt as though the coil was struggling a little and found I got a much more consistent vape at 54 watts. In fact at that level, I think this is my favourite of the two coils.

I’ve actually come away from the Smoant Knight 80 pod fairly impressed, it’s a bit bigger than many other 18650 “pod mods”, but this is made up for with the larger 4ml capacity. Smoant Pasito fans may also want to take a look at this as well if they want increased battery capacity and don’t mind the extra bulk. The coils have performed well once I found the sweet spot for them and seem to have a decent longevity to them.

Many thanks to our friends at Sourcemore for sending the kit out for review and as an added bonus they gave me a discount code for you to use… “SK80VNV” will drop the price down to $24.44 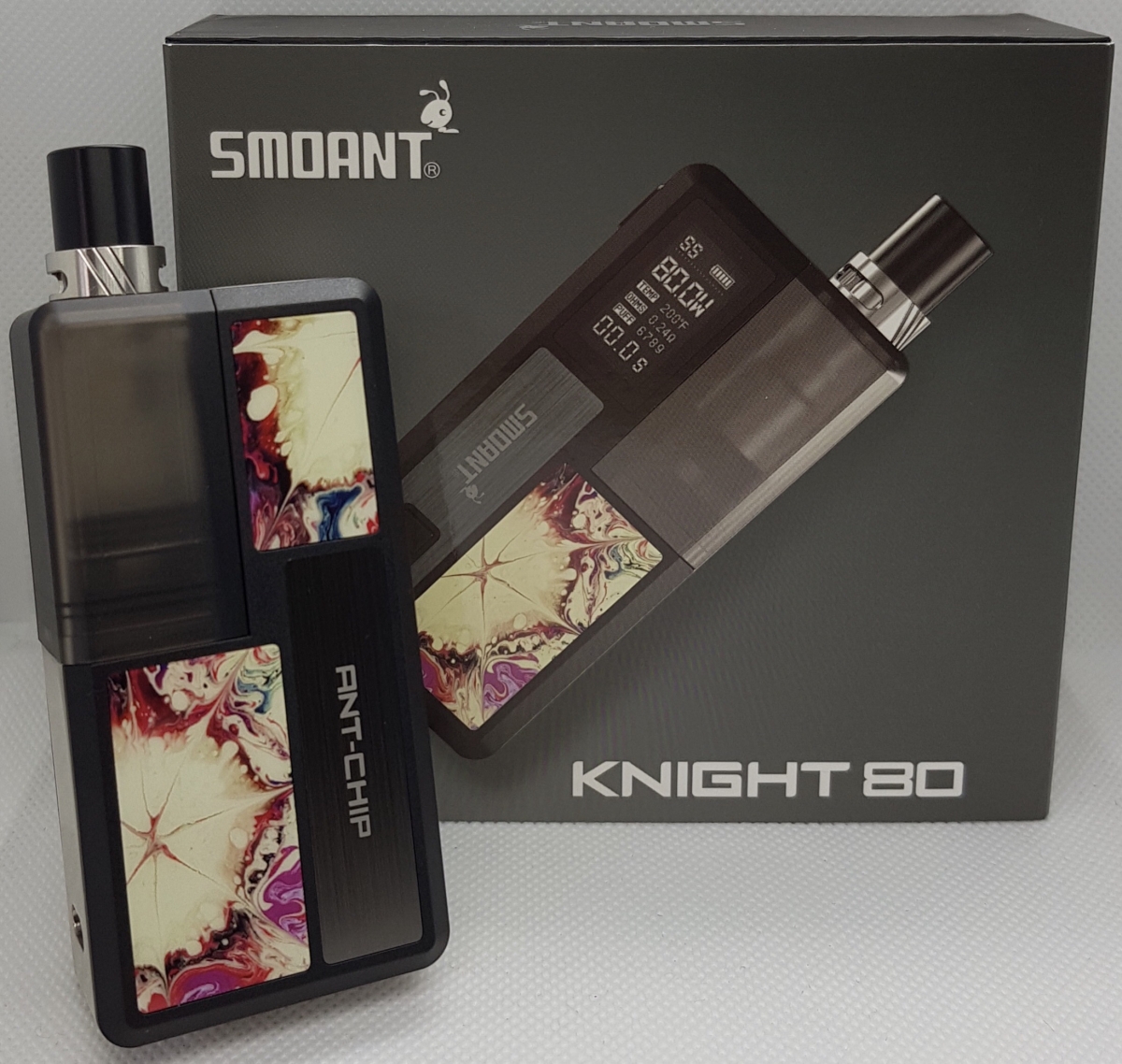