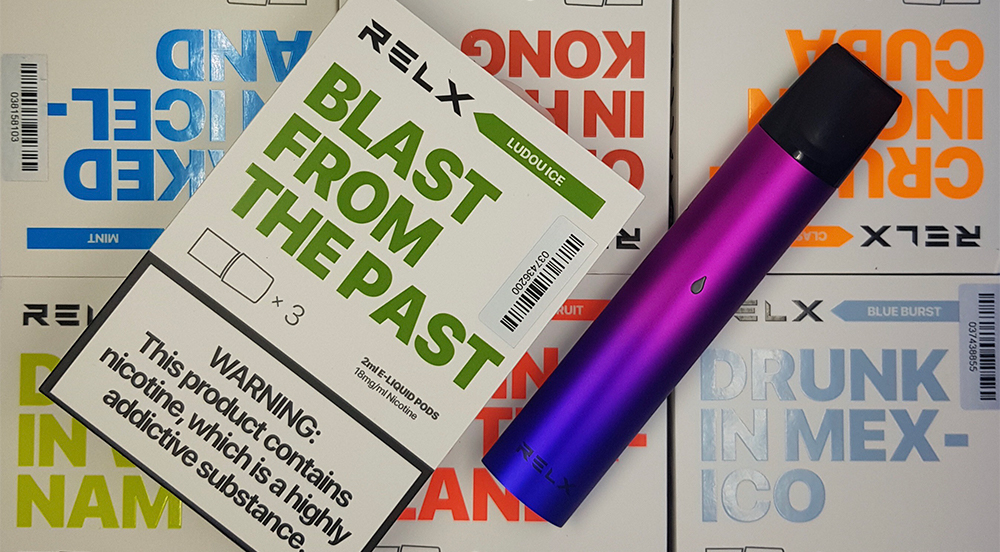 Today I’m taking a look at the RELX Classic pod system, which is apparently the most popular closed pod e-cigarette in east Asia, along with the full range of RELX flavour pods, which have been sent over for review by Heaven Gifts in association with their U.K. partner UKEcigstore. This is a prefilled pod system aimed primarily at the beginner market, and this type of kit is amongst the most popular among smokers wanting to give vaping a try thanks to the relatively low entry cost and ease of use.

The starter kit itself comes in a compact yet nicely presented box, displaying the kit in your chosen colour on the front of the box along with a list of contents on the back. Once you open the box, you are presented with a large cardboard sleeve with a “Break the Habit” message emblazoned across the front. Turn this around, and there’s a simple quick start guide printed on the back inviting you to throw away your last pack of cigarettes and begin enjoying your new RELX which is pre charged so you can begin using it straight away. Inside this sleeve is a more comprehensive instruction booklet which is extremely well written, giving the new user clear information on the use of their new device without bamboozling them with a load of jargon. Under this, you are presented with the RELX battery and two smaller cardboard boxes containing a micro usb charge cable and a mint flavoured pod. 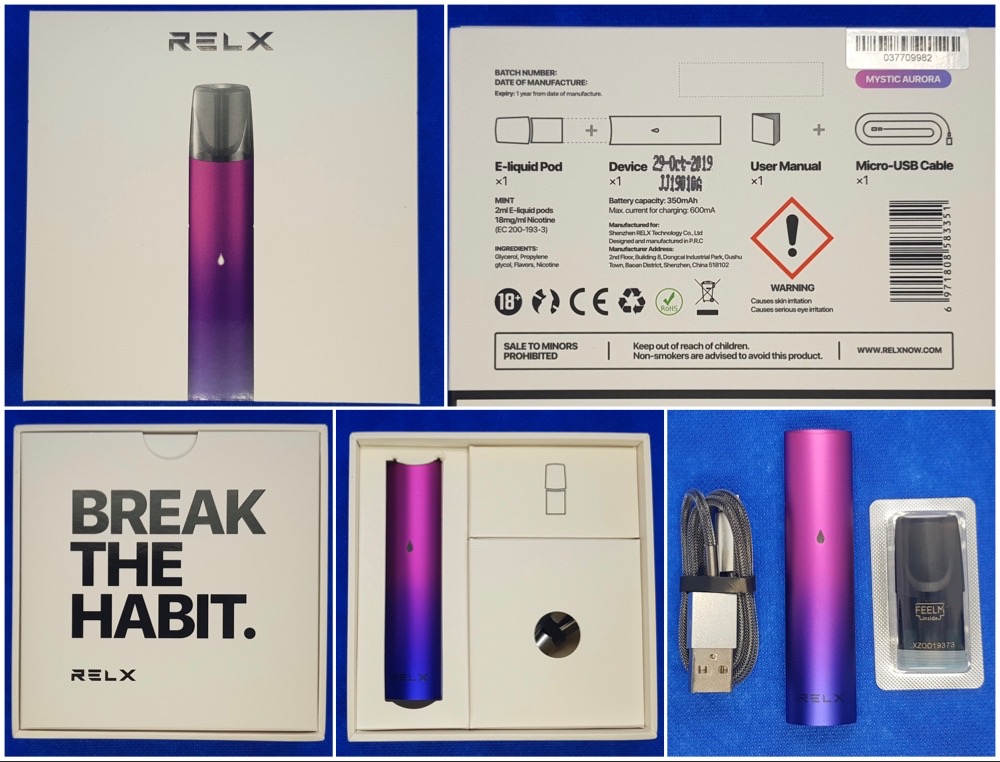 The pods come in a sealed blister pack and have rubberised bungs on the top and bottom to reduce leaking during shipping. Remove these and insert the pod into the battery, it will only fit one way due to the shape of the pod, and inhale. It really doesn’t get any simpler than this, and overall I believe this makes a great experience for the first time user so full marks to RELX on this front. 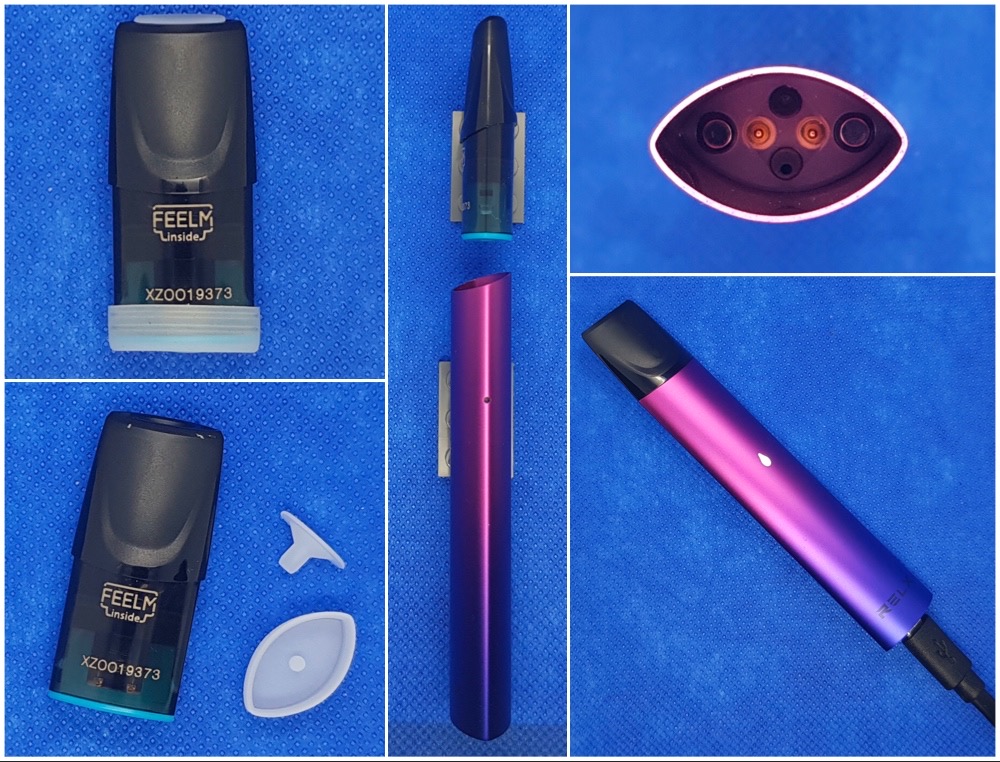 The device itself is compact and lightweight. It feels as if it’s constructed from aluminium with a large teardrop shaped led on one side which lights up when you inhale. There’s no colour changes to give you any sort of battery percentage indication though, which is a bit of a shame. Luckily there is vape whilst charging capability, so this isn’t too much of an issue and, in my charging test, the device charged at 0.43 amps giving a full charge of 370mAh, which is better than the stated 350mAh, in just 1 hour and 5 minutes so you won’t be without power for long.

The pods utilise the latest FeelM v2.0 technology which features a unique ceramic heating technology with a micro honeycomb structure, rather than the traditional wire wrapped around a piece of cotton found in many similar starter kits, so I was interested to find out how this performed. The RELX classic gives a fairly restricted draw, perfectly suited to a new vaper, and it gave decent flavour but I did feel that it was perhaps a little on the cool side. This could in part be down to the fact that most of the flavour pods have a cooling agent included as part of the flavour profile though.

The pods have a 2ml capacity and, thanks to the low power mouth to lung draw, last a surprisingly long time. I was able to get a good two evenings use out of a single pod, which gave decent flavour right up to the last drop of eliquid, but I was then confronted by a slight burnt hit as there’s no sort of temperature sensing built in, a missed opportunity perhaps to give a new user the best possible experience, but perhaps not surprising at the entry level price point.

As this is a closed pod system, once it’s empty you simply toss it in the bin and insert a new pod. These are currently available in seven different flavours and are supplied with three pods in a pack at a not unreasonable £11.99, which puts it on a par with other similar systems. In fact most of those have smaller capacity pods (<1.5ml), so these actually represent fairly good value in this end of the market. Overseas pods come in a range of different nicotine strengths but due to tpd restrictions they are only offered in an 18mg nic salt variety here in the U.K.

This is a subtle, fresh, wild mint flavour. It’s one of my top picks from the current line up as I’m partial to minty flavours in mtl setups. It’s not the strongest mint flavour, and there’s definitely a cooling almost menthol edge to this on the exhale without this becoming too overpowering.

Ludo ice “blast from the past”

This is quite possibly the weirdest flavour I have ever tried1 It’s a mung bean flavour, which several reps at the vaper expo back in October last year would have me believe is actually one of the most popular flavours in the East Asian market. This is quite difficult to describe as there’s simply nothing in my western upbringing to compare it to. There’s a slight “earthy” quality to it on the inhale and again that hint of cooling on the exhale. I suspect this might be a step too far for western tastes though, and is not something I would seek out again.

This is exactly what it says on the box, a classic tobacco. Full disclosure here, I hate tobacco flavours with a passion as it reminds me too much of smoking, but this does taste exactly like I remember a cigarette tasting, and I believe this is the only flavour that doesn’t have any cooling agent added in. This is perfect for someone just starting out who doesn’t want to venture into the weird world of fruity flavours, or someone who does like tobacco vapes.

Lemon iced tea, the tea seems to take a bit of a back seat here but is definitely present with the lemon coming in and quickly taking over. Again, there’s a hint of cooling agent but much less than the mint or ludo ice pods. Quite refreshing if you want something different but I’m not sure I could use this as an all day vape, probably more suited to the American market where iced teas are popular, but I’m british and tea is supposed to be hot dammit!

A subtle blueberry fruit flavour on the inhale with that ever present cooling on the exhale, not too in your face though. Makes a good all day vape if you like your fruity flavours.

A mix of tropical fruit flavours, I’m picking up hints of lemon and lime with a hint of something else I can’t quite put my finger on (this is why I don’t generally do juice reviews), there’s that light hint of cooling again on the exhale. Probably my favourite amongst the three fruity pods on offer.

This is a ripe fruit/berry mix. Again there’s that hint of cooling going on in the background. Fruity and sweet, but not too overpowering, I would probably enjoy this more if it didn’t have that cooling agent, but again a pleasant all day vape.

This is a perfect place to start from if you’re a current smoker and want something simple and inexpensive to try out. The range of flavours mean you should find something to suit your tastes as well, and the FeelM technology used in the pods gives a decent flavour representation and wicks well. The RELX Classic pod system is currently on offer for just £12.99 (down from £24.99) over at UKEcigstore so this is the perfect time to give this a try. 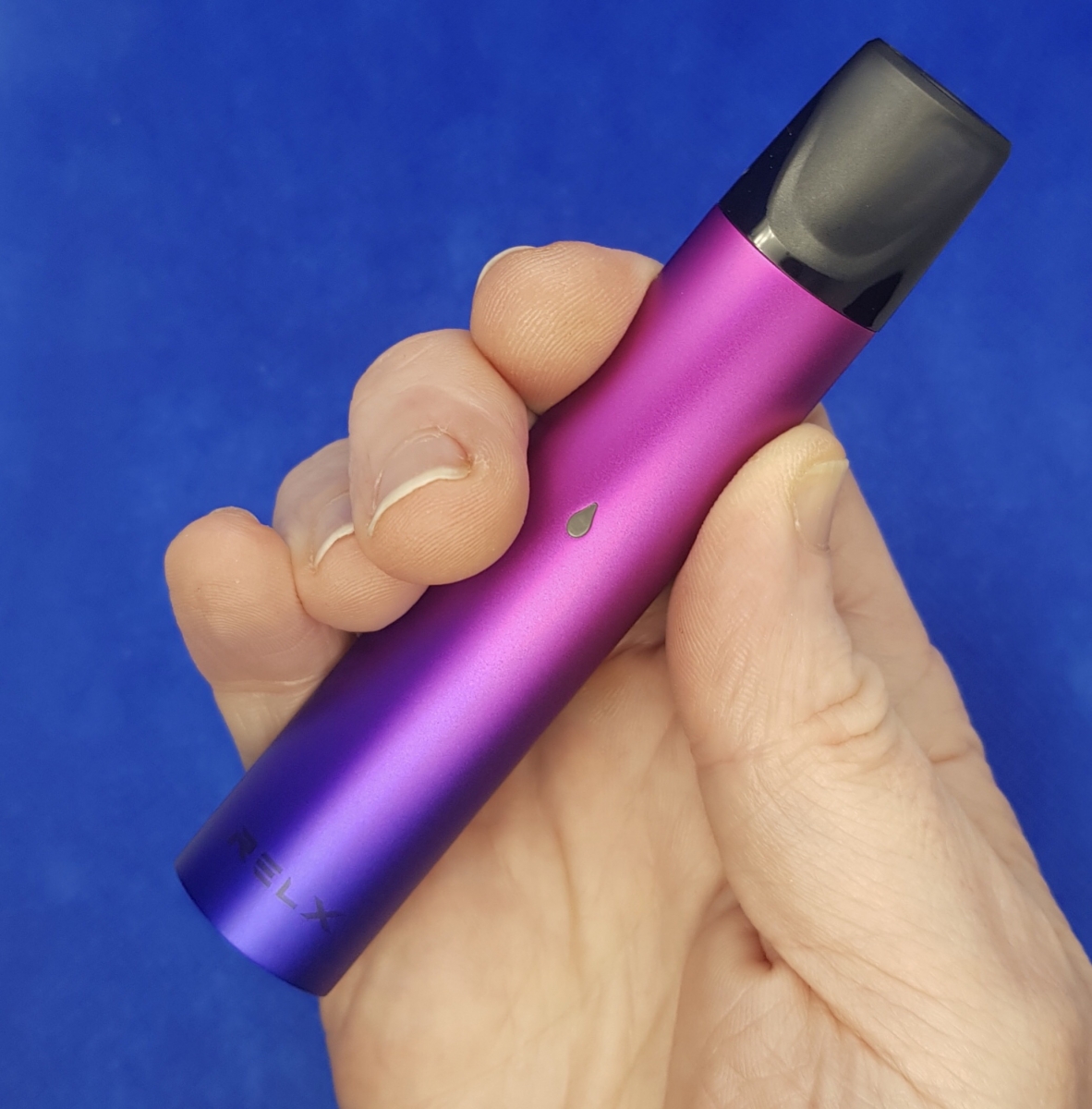