OXVA sent over a surprise package containing the Origin SE which strips the Origin series right down to its bare bones aiming squarely for the direct lung pod market. It’s a really tiny lightweight kit constructed mainly from polycarbonate coupled with a relatively small built-in battery so I was keen to see how it would hold up to day to day abuse and how well that battery would last if this was your daily driver. 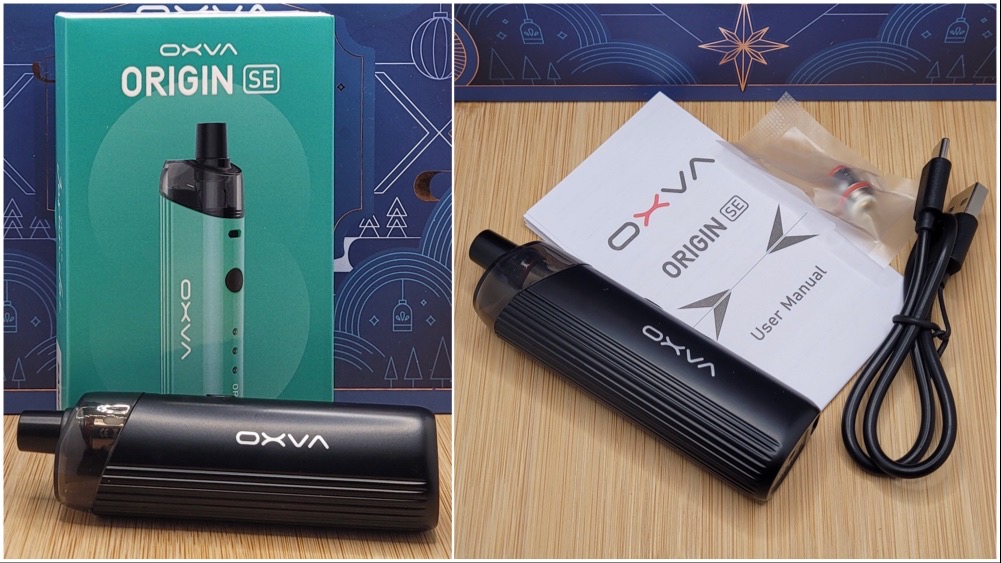 Inside the little presentation box you get the Origin SE itself with a 0.3ohm UniCoil installed, a second 0.5ohm UniCoil, a small user leaflet, and a USB-C charge cable. First impressions out of the box are that this is really lightweight thanks to that polycarbonate construction, even with a coil installed and a full tank of e-liquid, it still only tips the scales at 63 grams making it the most pocketable Origin yet. 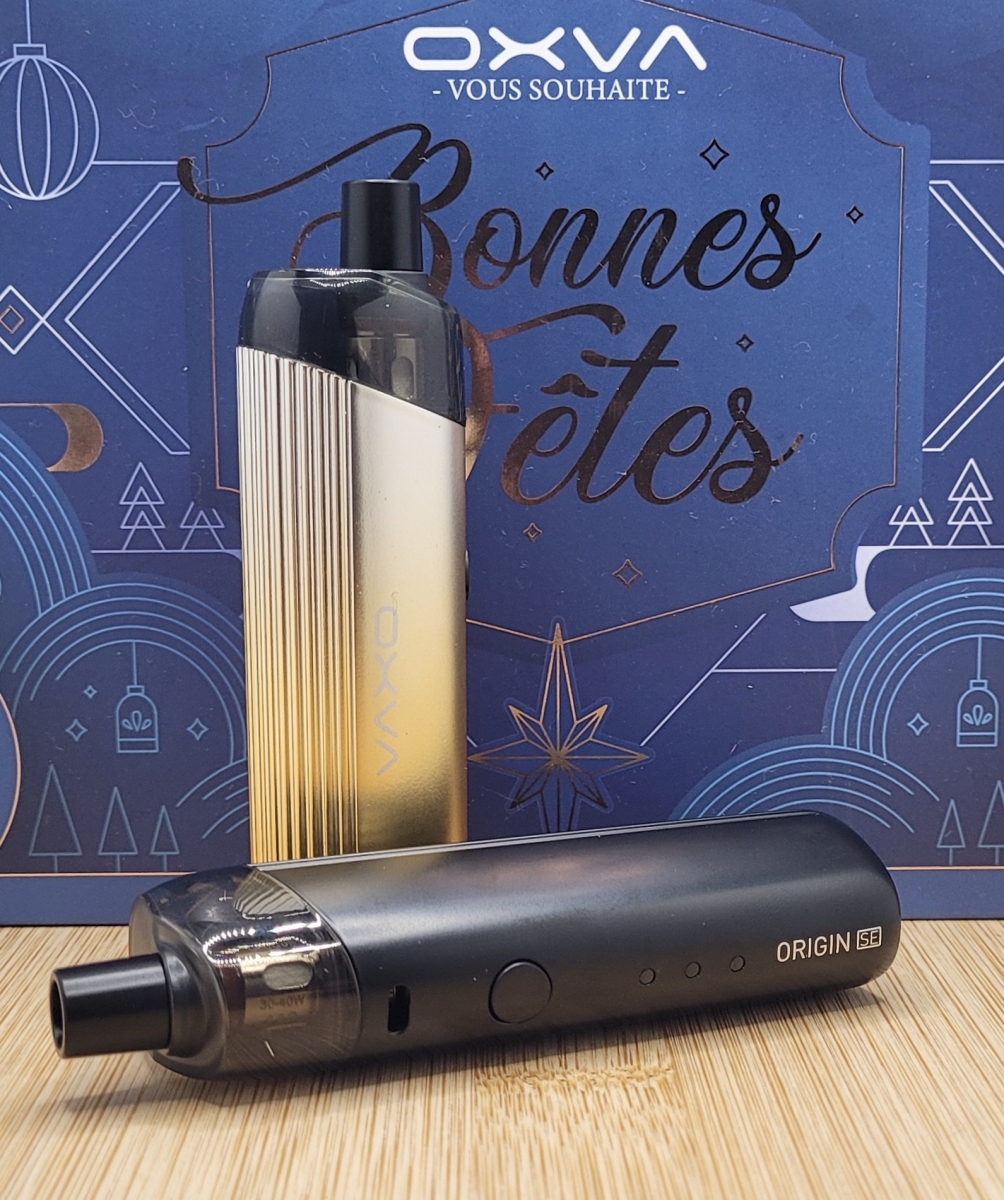 I was sent the Matte Black and Gradient Gold versions to test, but it’s also available in Gradient Green, Gradient Blue, Magenta Pink, Tiffany Blue, Sakura Pink, and Silver Gray so you should be able to pick one to suit your personal taste. Myself, I’m all about the Matte Black version, but the Gradient Gold with its metallic finish isn’t too garish so even that has managed to work its way out of the house as well. 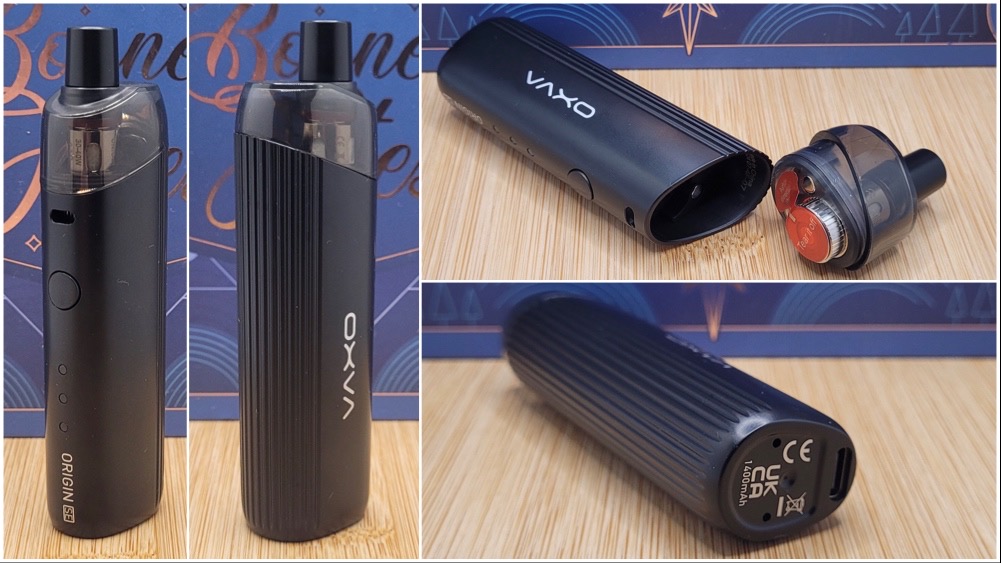 The Origin SE takes the original teardrop design of the Origin and shrinks everything down, it also simplifies the controls with an autodraw system coupled with a single button control operation. The bold ridges running down the spine of the battery section provides some much needed grip, and I appreciate the understated branding on display here. Up top, there’s the pod which protrudes above the main body making it easy to see your e-liquid levels, and at the base you’ll find the USB-C charge port. 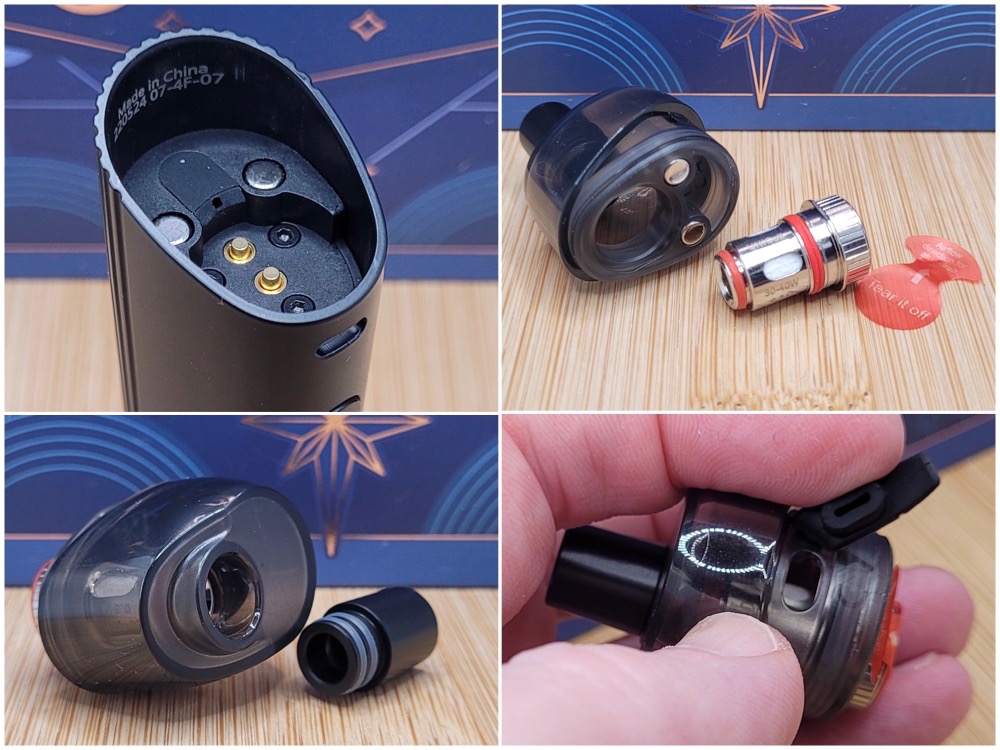 The 4.5ml (2ml for TPD regions) PCTG pod sits in the recess at the top of the Origin SE and is held firmly in place by magnets, OXVA contacted me to say that they’ve had reports of the magnets coming out in these sample run kits but it’s not something I’ve experienced myself and they’ve changed the glue for the final retail units now they are aware of the issue. If you look closely, you’ll see a small hole located between the magnets, this is the autodraw sensor (more on that later) with air being drawn in from the 4.9 x 2.3 mm intake on the front of  the battery section.

Rather than going down the integrated drip trip route that a lot of modern pod kits use, OXVA has opted to go for a standard 510 drip tip, I’ve found the included drip tip very comfortable to use but it’s always nice to have the option to change it out. The fill bung is concealed around the back of the pod which means you need to remove the pod to fill, this gives you the opportunity to check for any leaking or condensation but I’ve not experienced either and I’ve been using these as my only kit for over a week. 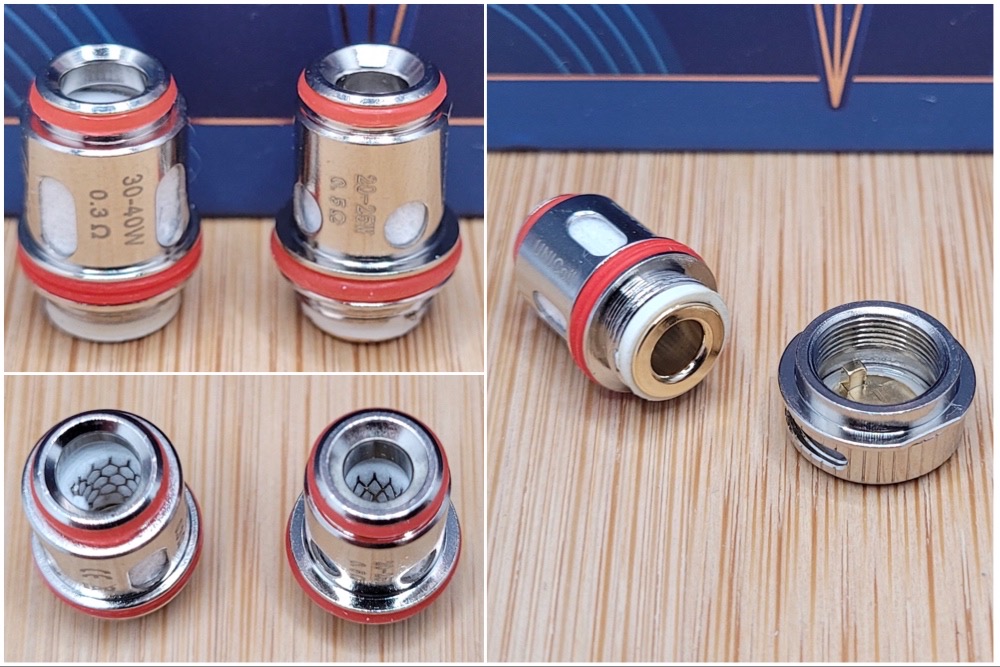 The pod uses their established push fit UniCoil system with a 0.3 and 0.5ohm kanthal mesh coils included in the kit, just bear in mind that these use a removable airflow control ring and remember not to throw it out when you’re changing coils!

There are three LEDs running down the front of the Origin SE which show your currently selected power level (1 light = low, 2 lights = medium, 3 lights = high) and charge status (green above 65%, blue above 30%, and red below 30%). This is all controlled by the single power button making it very easy to control: 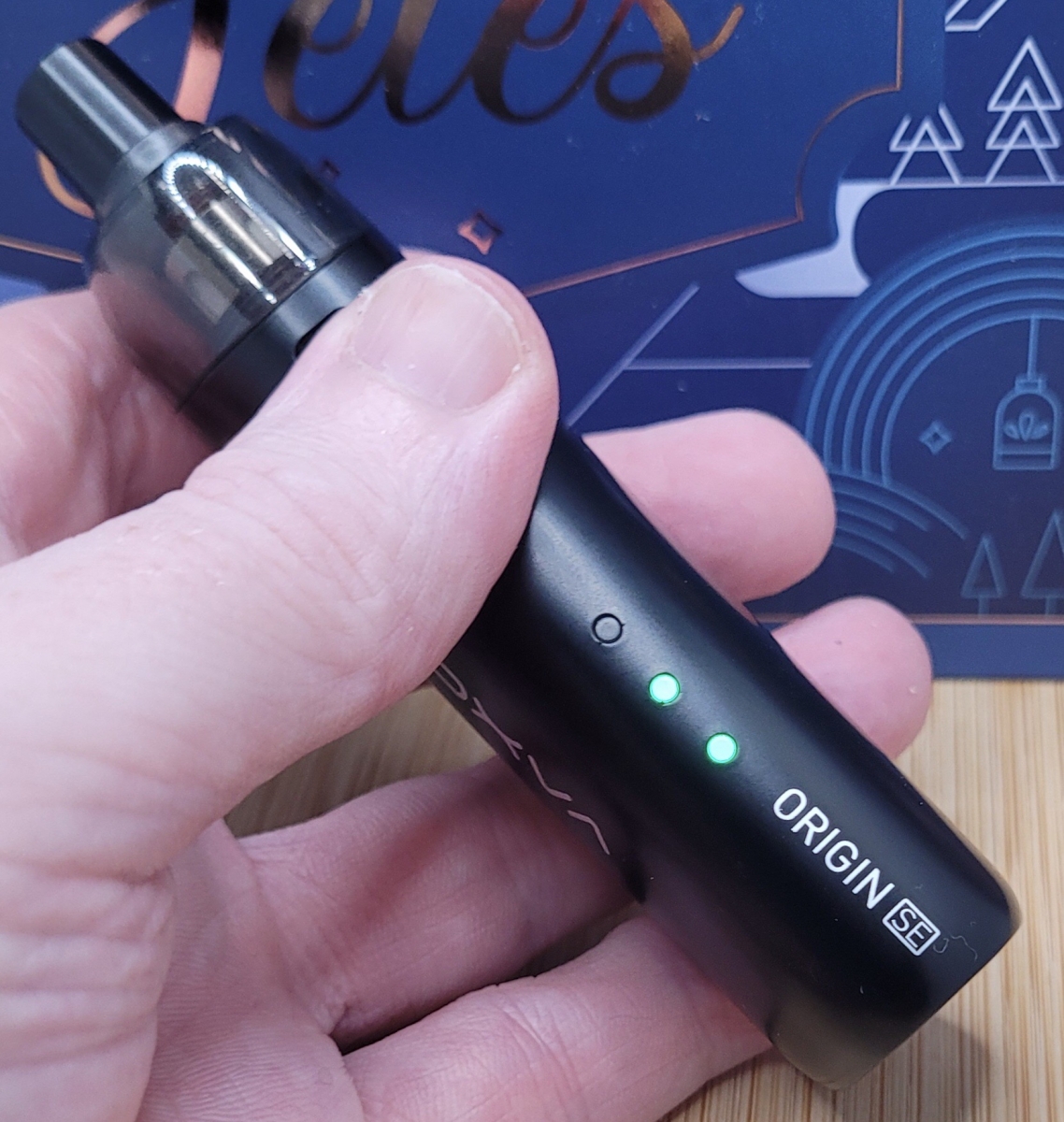 The onboard OXVA Photon chip will intelligently adjust the power level to match your installed  UniCoil:

I have previously found the wattage ratings on the UniCoils to be somewhat ambitious with the coils frequently performing best well below the quoted wattage ranges and even struggling at the top end of the scale, so I was concerned that this may be an issue particularly when using the highest power setting. Luckily that wasn’t the case here and all the coils performed flawlessly even on the high setting however I personally felt that the optimal setting was the medium power level for all the coils.

With both the included coils (0.3ohm and 0.5ohm) the autodraw feature has worked perfectly, so much so that I found myself favouring this over using the power button. This might be in part due to the fact that the airflow on the Origin SE is far more restricted than the Origin X I originally tried, less than half, but this has turned out to be perfectly matched to the coils. I’ve been running both the included coils with the AFC ring fully open and to get the same flavour out of them on the Origin X I have to set the AFC to about two thirds open. 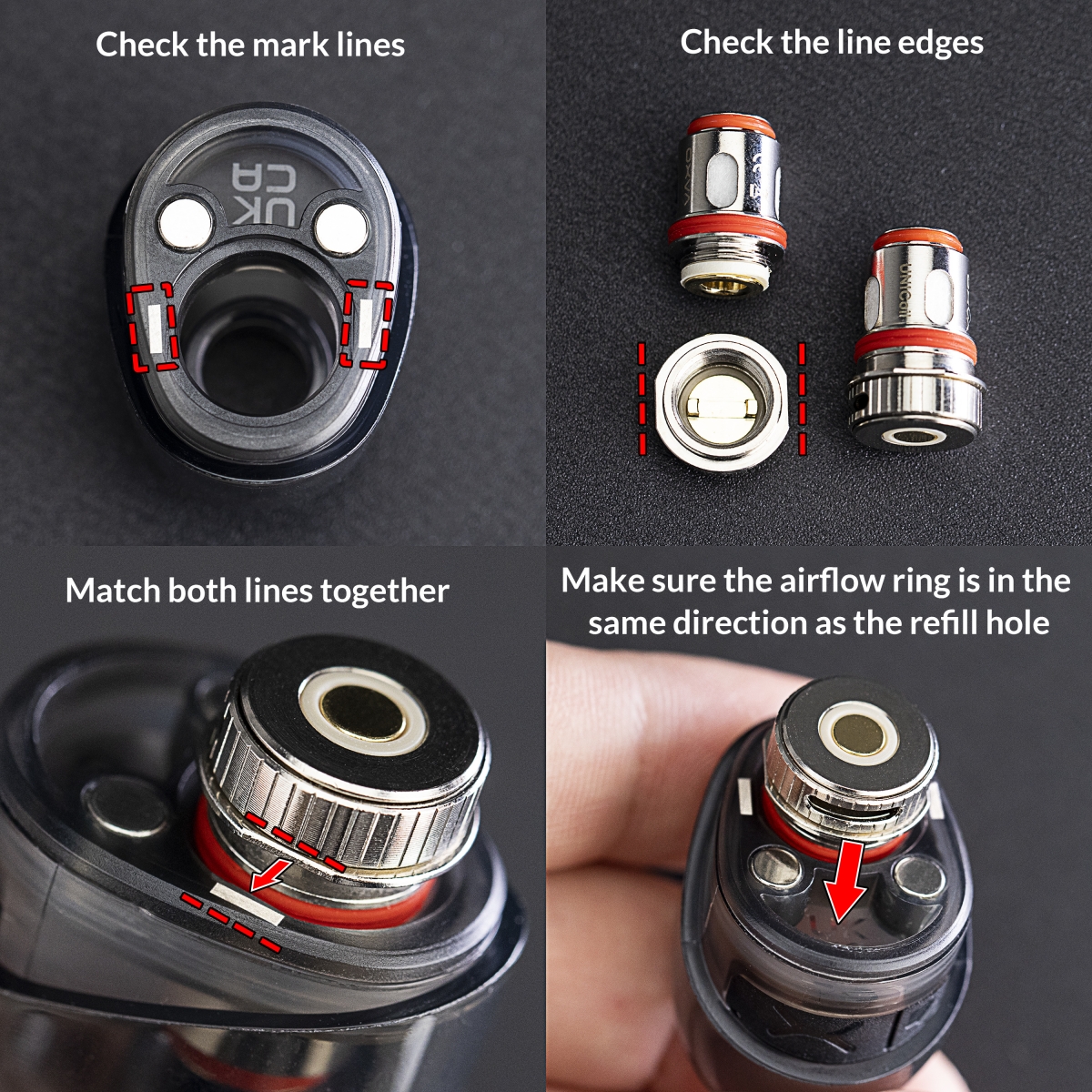 OXVA kindly sent over a pack of the 1.0ohm coils which I thought might be better matched to the 1400mAh battery so I also tested one of those. Flavour was once again great with the optimal power setting being “medium” again, however the autodraw system stubbornly refused to work here! OXVA advised placing the airflow on the AFC ring towards the back near the autodraw sensor but this made no difference so I had to resort to using the power button for the 1.0ohm coil. (Photo above courtesy of OXVA)

So how did the 1400mAh battery hold up to the different coils? With the 0.3ohm coil, I found that I was running out of power by around four in the afternoon, the 0.5ohm coil fared better getting me well into the evening before needing to reach for a charger, and it goes without saying that with the 1.0ohm coil you’ll get well into a second day. Note that you won’t be able to use the 0.2ohm UniCoil here as it’s below the minimum resistance range for the device (0.25ohms) and the battery life would most likely be terrible in any case!

During my charging tests the Origin SE hit a peak charging rate of 1.48 amps and the LEDs will gently pulse to indicate charging. The LEDs go out after 47 minutes with a recorded charge of 1194 mAh, but at this point it’s still charging at 0.9amps, charging finally drops to 0.002 amps (and never drops below this) after 1 hour and 25 minutes with a final recorded capacity of 1260 mAh.

OXVA claims you can charge the Origin SE to 80% in around 30 minutes, I only recorded a charge of 720mAh in that time though which would be closer to 60%. Vape whilst charging is also supported with charging briefly stopping whilst you take a few cheeky puffs.

I’ve really enjoyed my time with the OXVA Origin SE, in fact it’s been the only thing I’ve used for the past week with a 0.3 or 0.5 coil in one pod and a 1.0ohm coil in the other. I really like the simplified control scheme which I think is ideal for beginners, and that slightly restricted airflow seems to be perfectly matched to the UniCoil system. I might even go as far as saying this is possibly my favourite Origin kit yet.

Many thanks to OXVA for sending the Origin SE over for review. 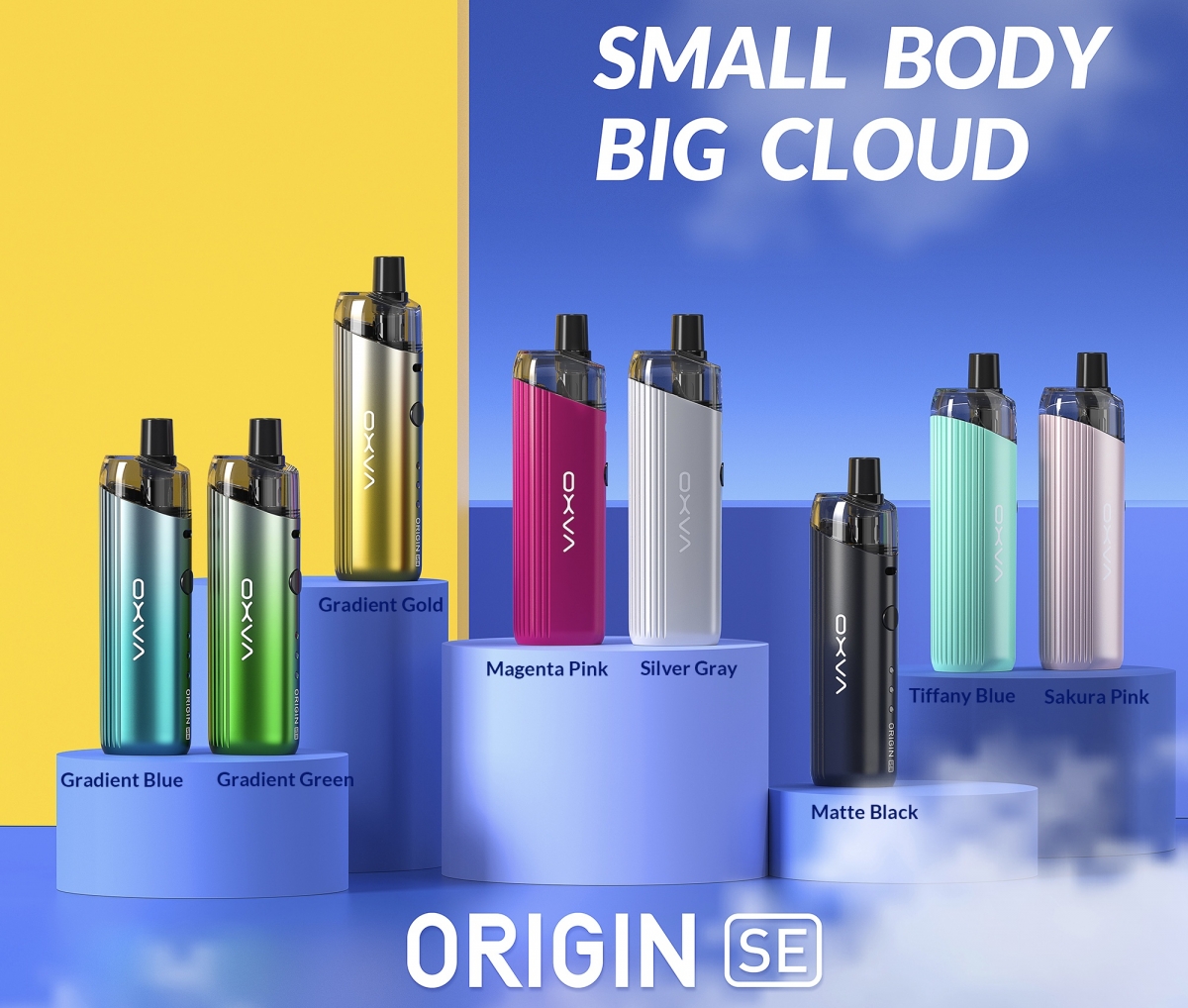